Daniel Romanchuk added a fifth Boilermaker wheelchair race win to his total Sunday and Jenna Fesemyer was the top finisher among women in the race for her second time. 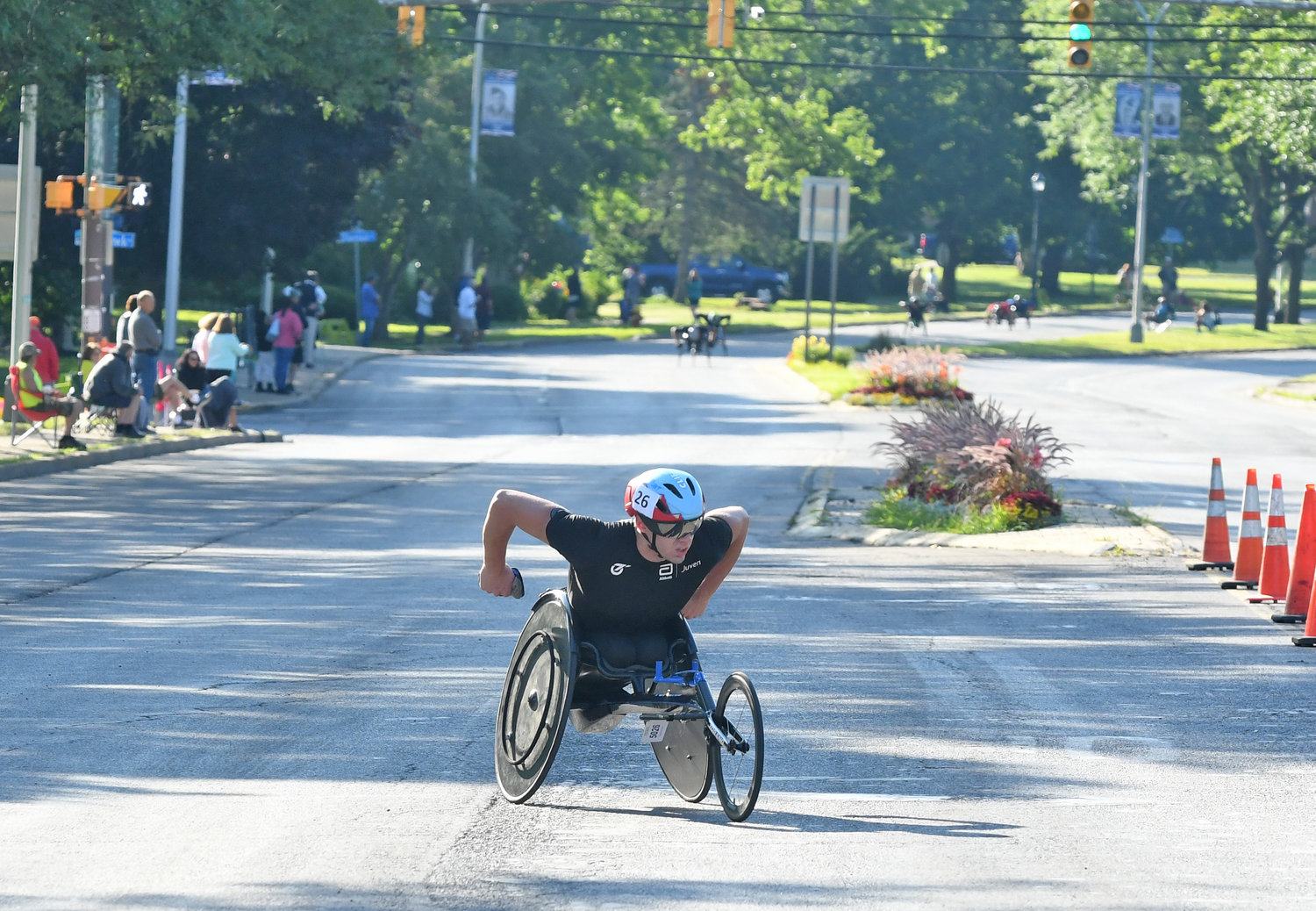 The first wheelchair racer of the 45th Boilermaker Road Race to make the turn left from Memorial Parkway to Valley View Road was eventual winner Daniel Romanchuk. It was his fifth win in the Utica race.
(Sentinel photo by John Clifford) 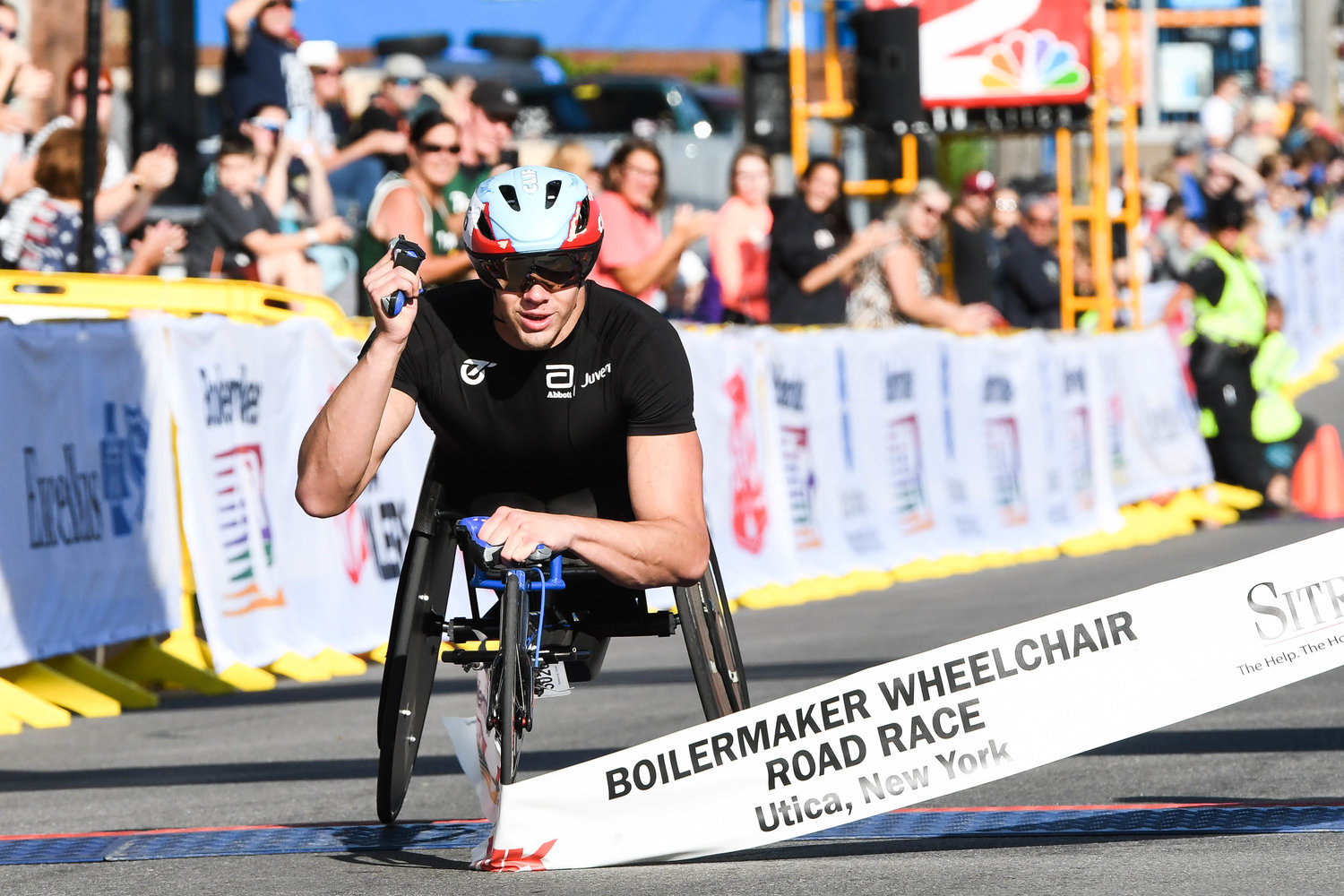 On Sunday, Daniel Romanchuk won the men's wheelchair 15K at 45th Boilermaker Road Race in Utica. It was the fifth Boilermaker win for the 23-year-old. His time of 31:32:23 surpasses his previous record in the Boilermaker of 31:45.
(Sentinel photo by Alex Cooper) 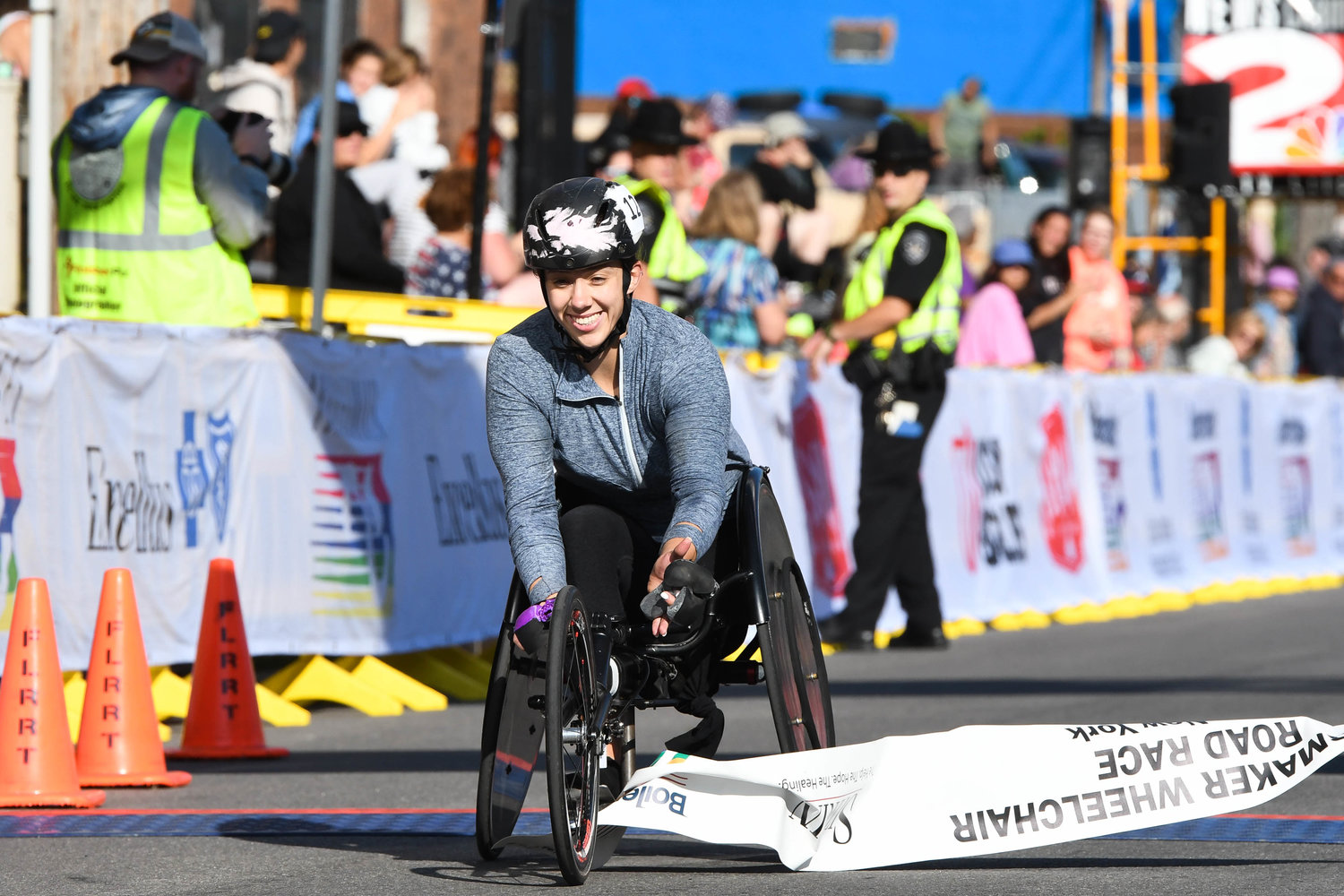 Jenna Fesemyer crosses the finish line with the best time among women competitors in the wheelchair 15K at the 45th Boilermaker Road Race on Sunday in Utica. It was her second time winning the women's race, three years after her first.
(Sentinel photo by Alex Cooper) 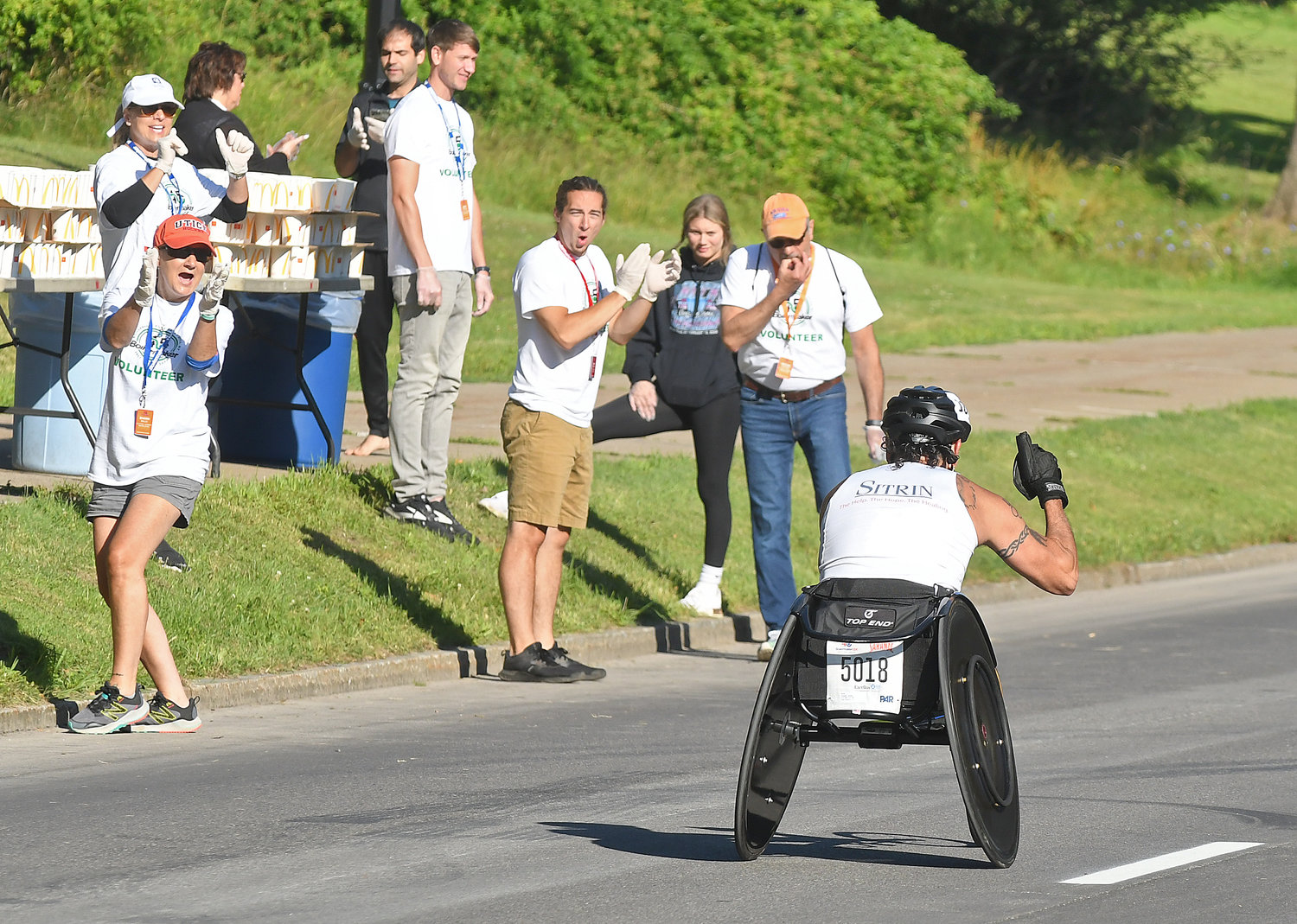 Wheelchair racer James Joseph of New Hartford gives a thumbs up to spectators cheering him on as he rockets down Memorial Parkway after coming down Master Garden Road in the 45th Boilermaker Road Race Sunday. Joseph was 25th in the race.
(Sentinel photo by John Clifford) 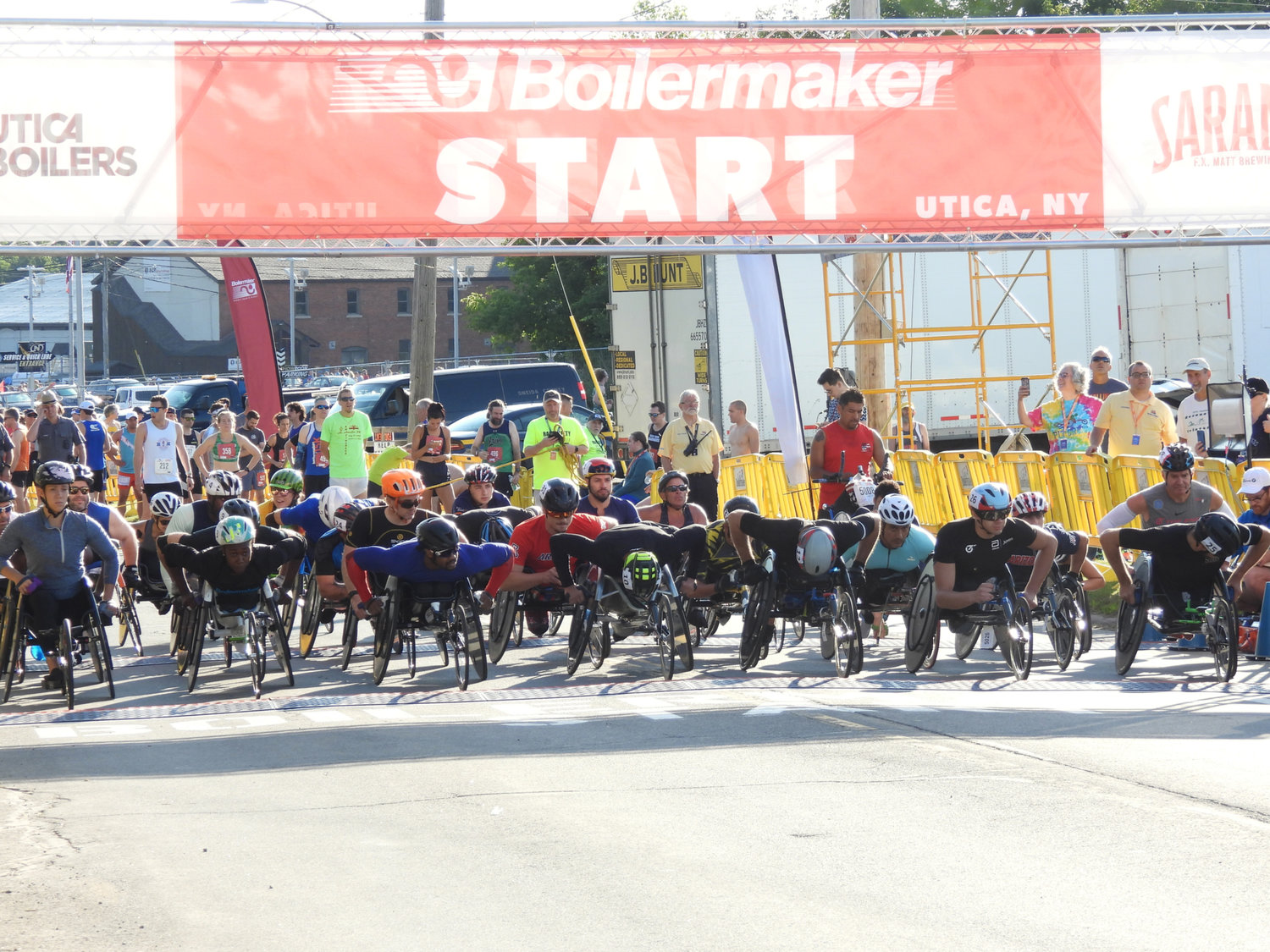 UTICA — Daniel Romanchuk added a fifth Boilermaker wheelchair race win to his total Sunday and Jenna Fesemyer was the top finisher among women in the race for her second time.

Romanchuk blew away the field, winning by almost four minutes in 31:33. Utican Hermin Garic took second in 35:25. Romanchuk's time surpasses his old record in the Boilermaker of 31:45. He's one of three to win the Boilermaker wheelchair division five times.

The 23-year-old from Champaign, Illinois, said he got the kind of start he aims for. "I tried to break as early as I could." On the course's first hills he was able to get separation and had "a nice pace from there."

Even with the big lead late in the race, Romanchuk said his mind frame does not change. "I never really say, 'I've got it,' until I cross the (finish) line."

He said he was happy with his time on a day when it was "beautiful. No rain. Great temperature. No wind. Amazing day." He added that the road conditions were also "amazing."

Fesemyer, age 25, also races out of Champaign, Illinois. She won the race the first time in 2019.

"I've done this course before but it surprises me every time. The hills always present a challenge." And that's hard to train for in the flat lands of Champaign, she added. So her training focused on long distances since "the course doesn't play to my strengths." She logged 120 miles a week to get in shape for the stamina needed on the Utica course.

Philadelphia resident Emilia Perry, 29, finished second with a time of 46:18.

Fesemyer also thanked the volunteers and staff of the Boilermaker for their work after "a quiet few years" in the wake of the pandemic.

"It was a great finish," said Garic after the race. "My goal was to get on the podium." His time was "a personal record for me in the 15K and Boilermaker," he noted. "It feels good." He added that the competitive field was a boon this year. "It helps you to push faster," because being alone can make you "stagnant." He was 12 seconds faster than third place and 40 seconds ahead of the fourth and fifth racers.

He said he "couldn't have asked for better weather," and said the course was "probably the smoothest it's ever been." Besides encountering a bicycle rider who wandered onto the course around the fifth mile, the race was problem-free, he laughed.

Garic has been racing vitually non-stop since last fall. Now he gets "a week off to recuperate, then training."