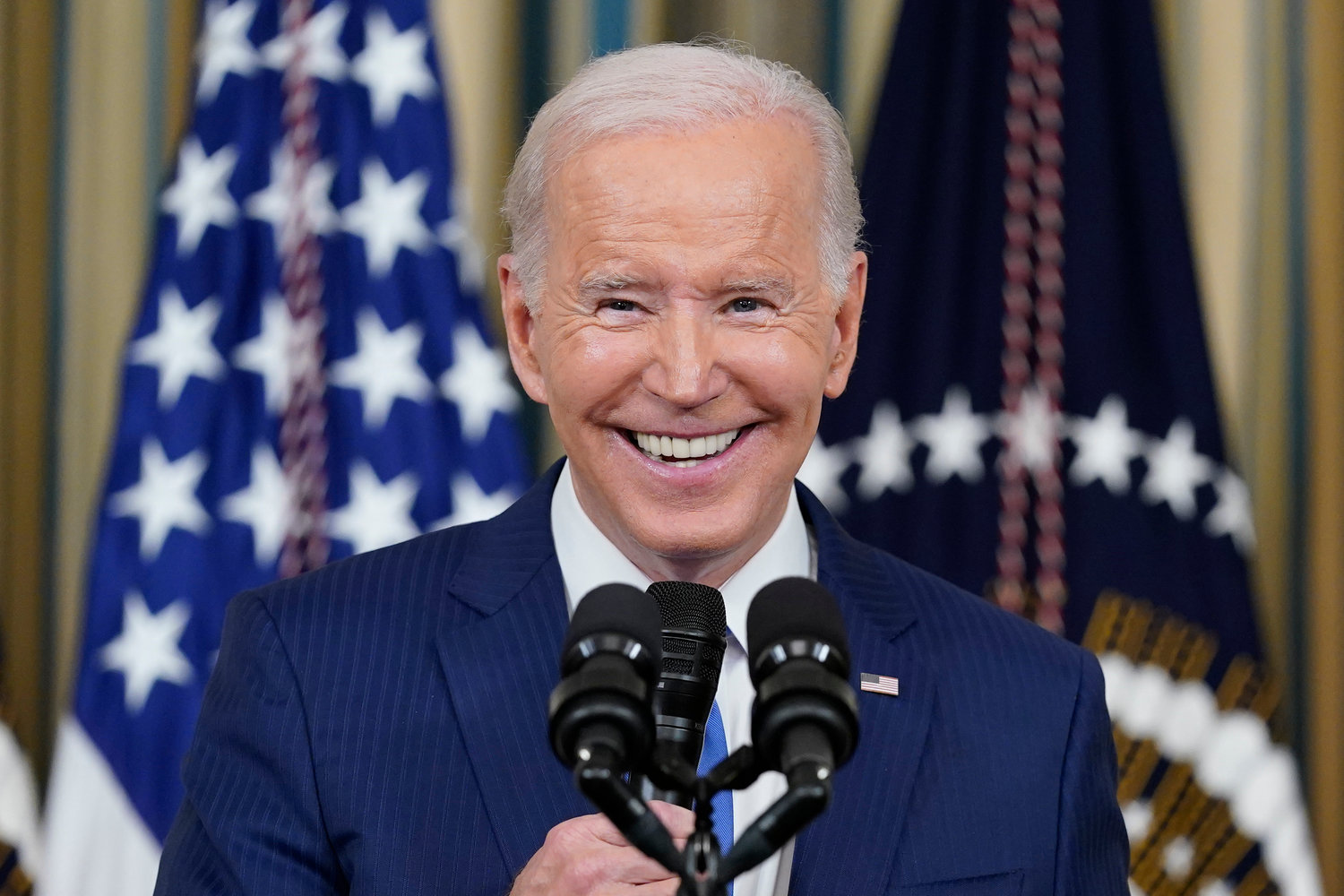 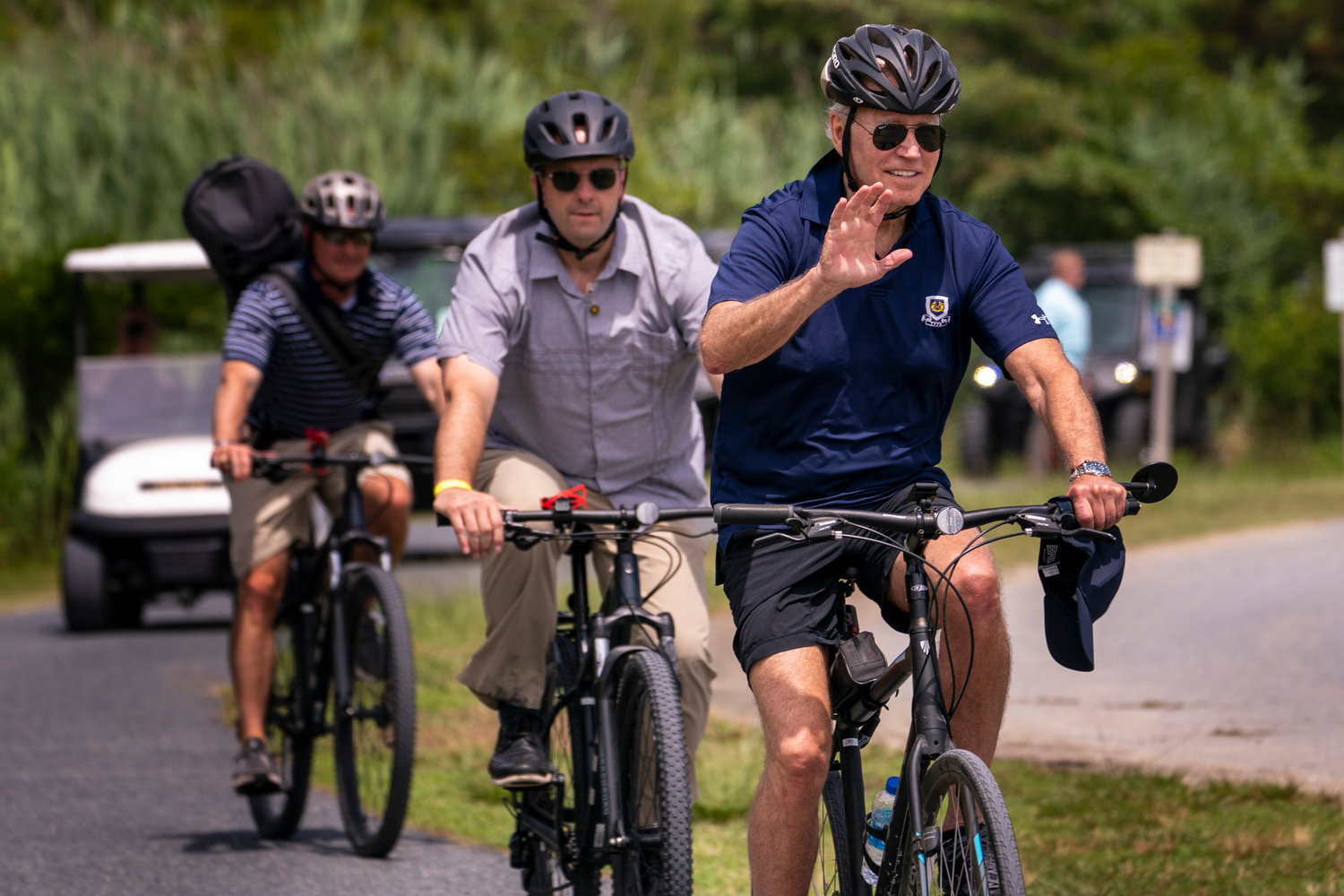 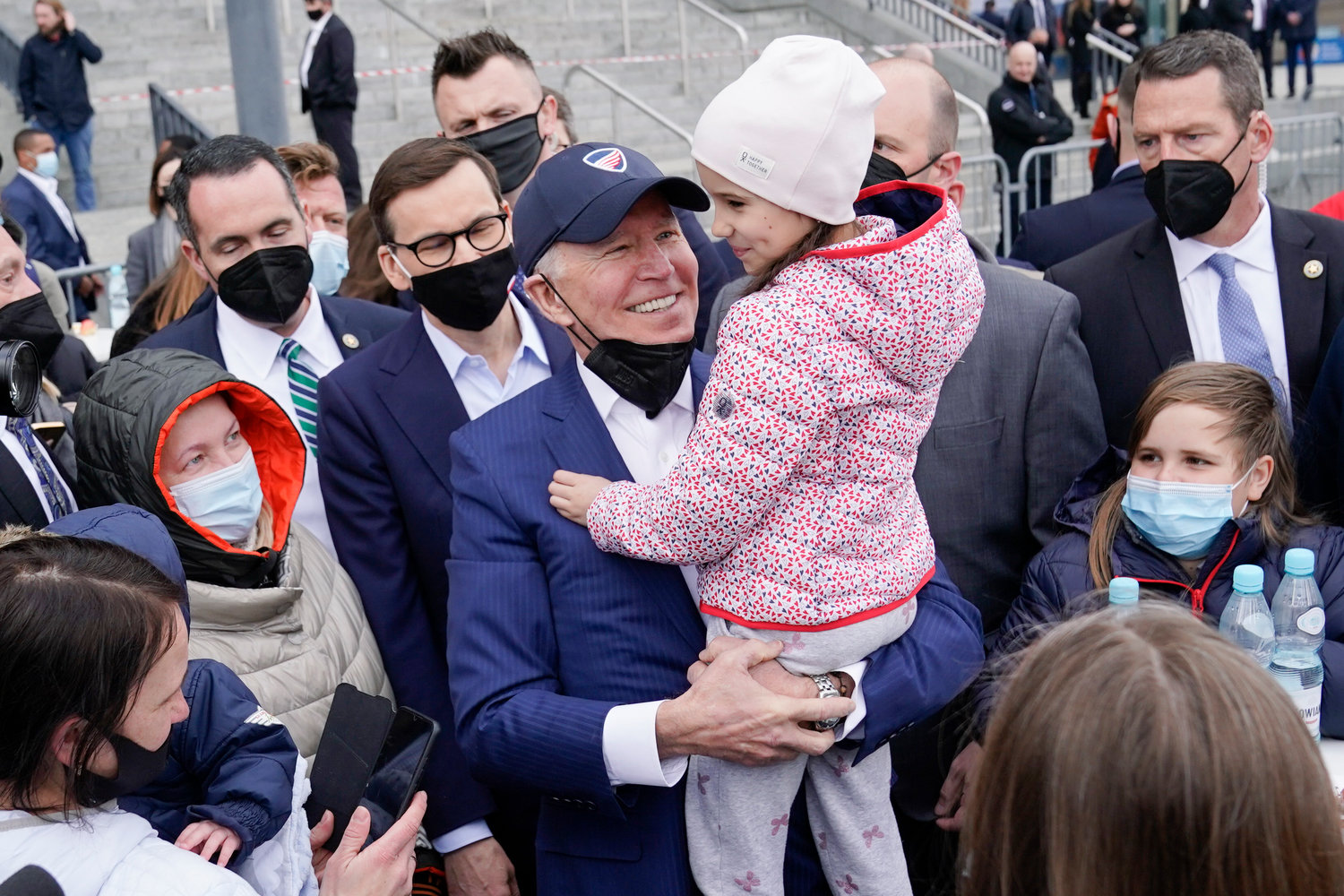 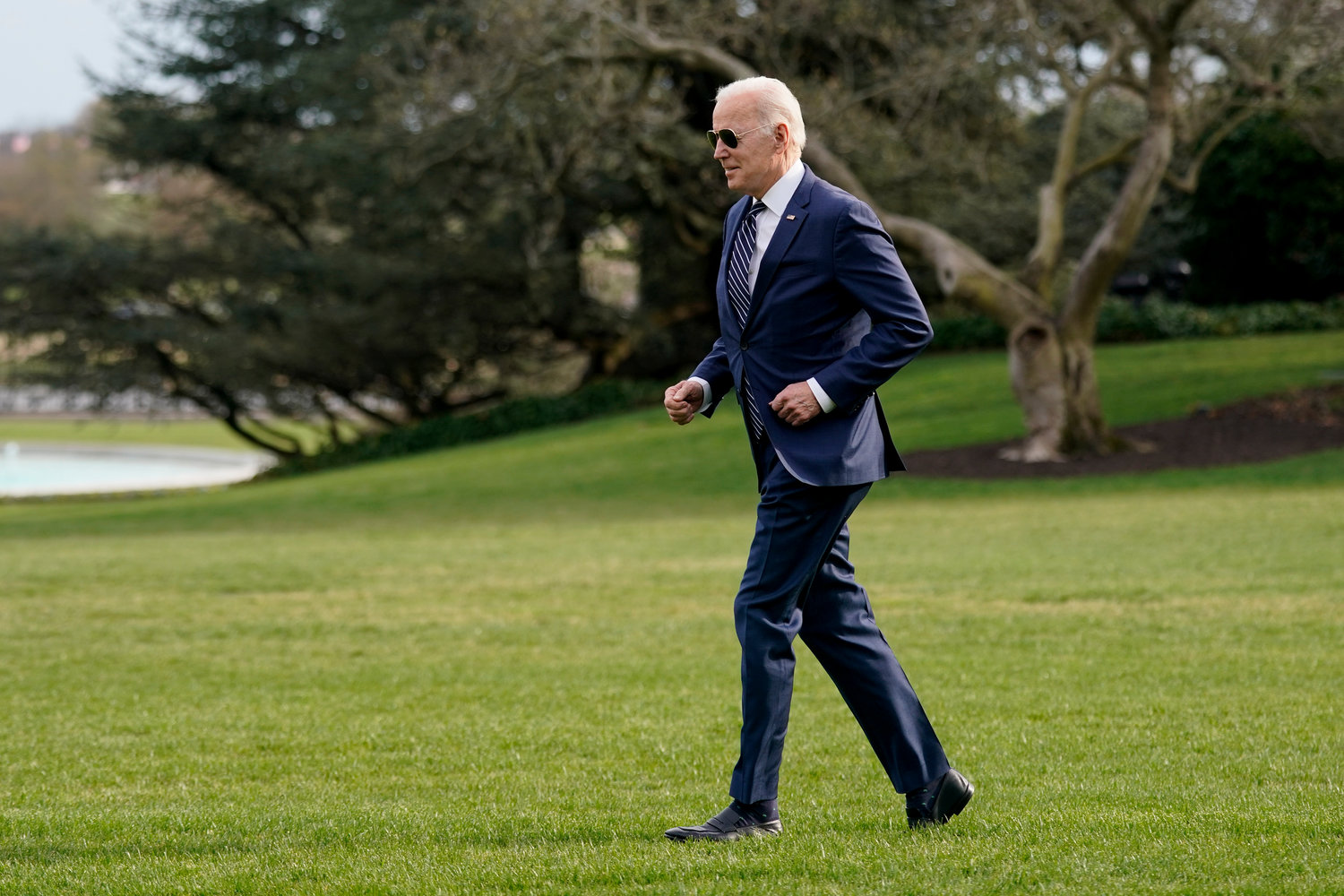 President Joe Biden jogs across the South Lawn of the White House to speak with visitors before boarding Marine One, Friday, March 18, 2022, in Washington. Biden turns 80 on Sunday, Nov. 20.
(AP Photo/Patrick Semansky, File) 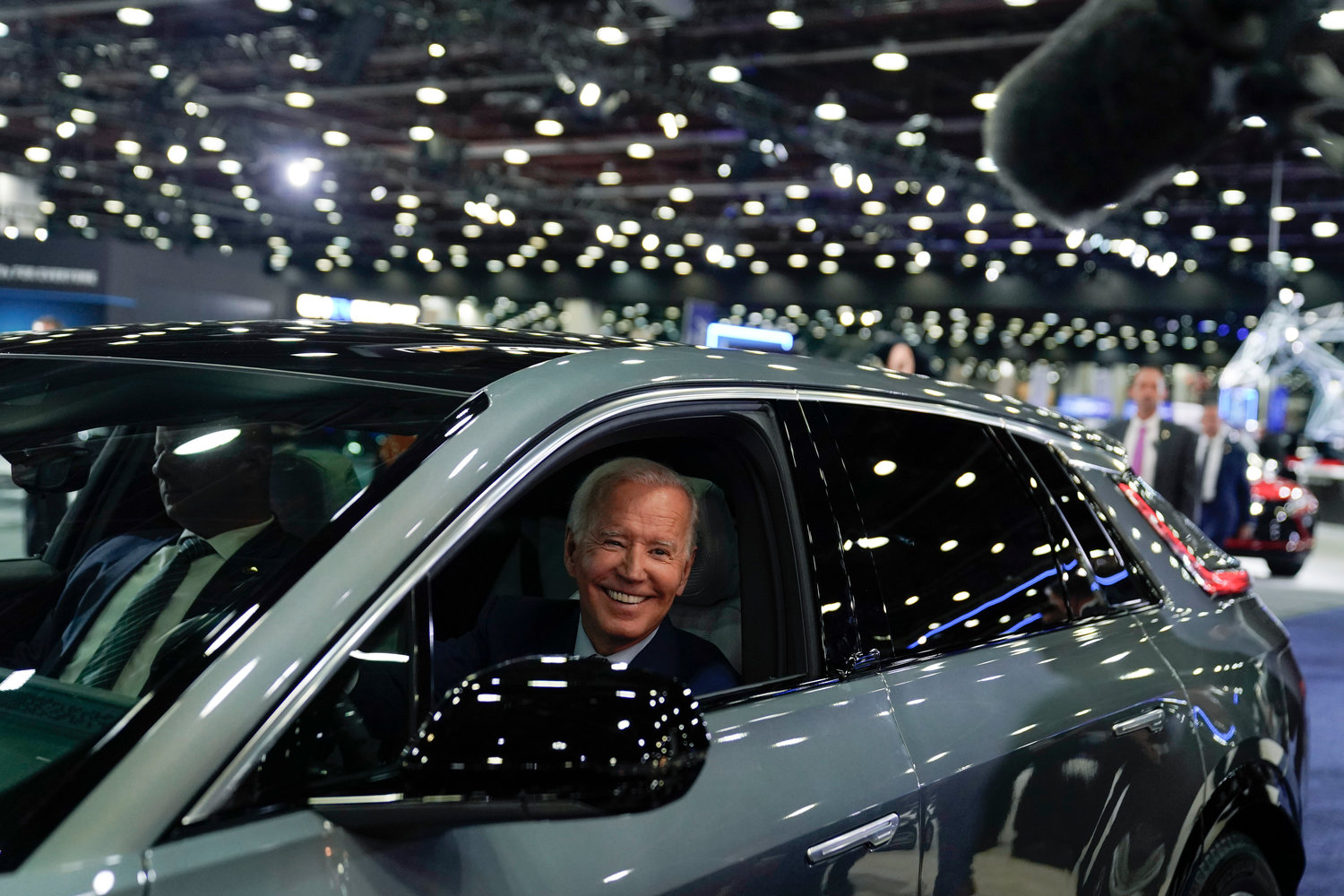 President Joe Biden drives a Cadillac Lyriq through the showroom during a tour at the Detroit Auto Show, Sept. 14, 2022, in Detroit. Biden turns 80 on Sunday, Nov. 20.
(AP Photo/Evan Vucci, File) 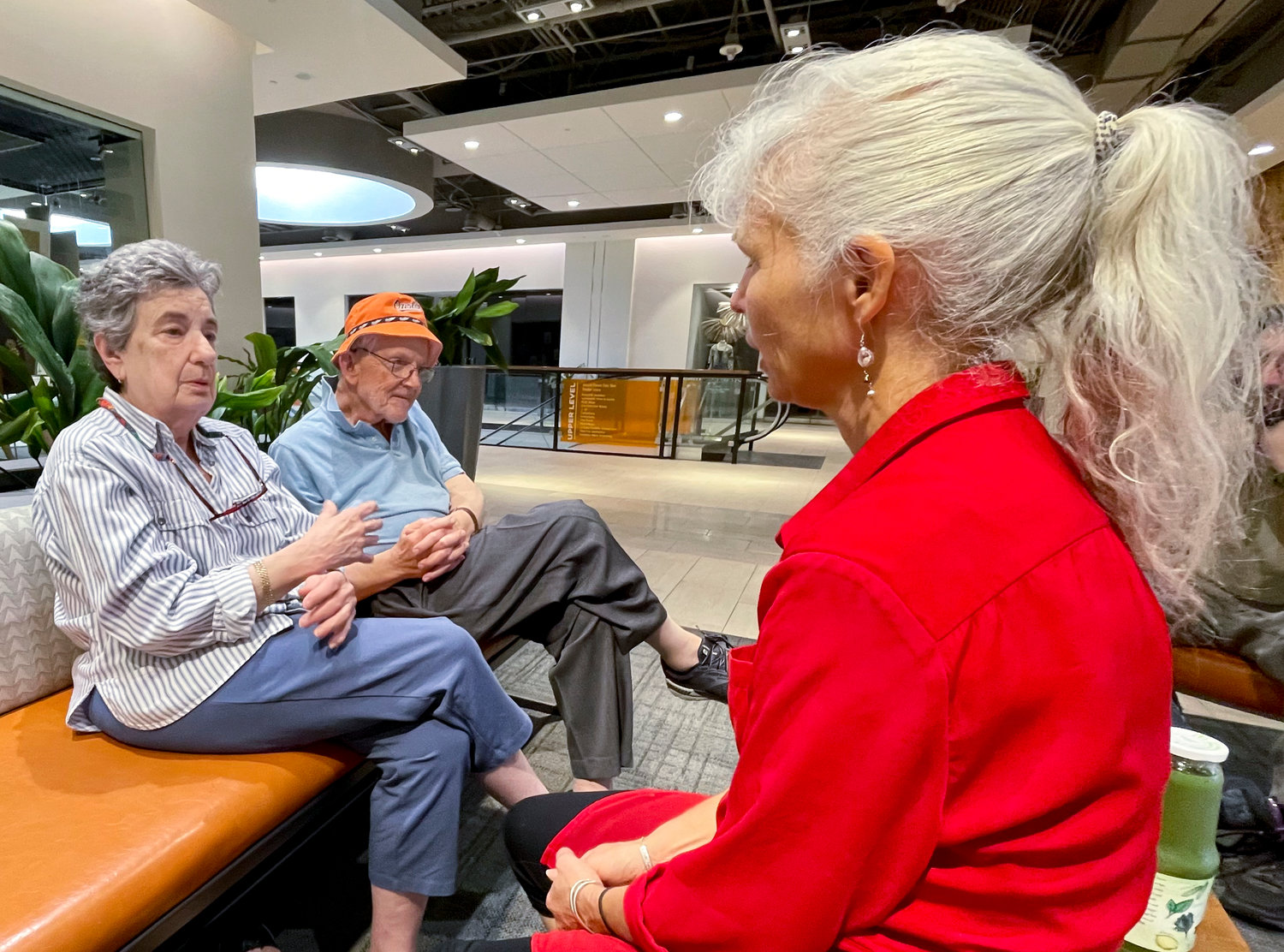 Roz and Nelson Hyman, left, talk with their friend Elizabeth Grove at a shopping complex in Towson, Md., Sept. 18, 2022. The Hymans are Democrats who say President Joe Biden's age, 80 on Sunday, isn't a concern for them if he decides to run for another term. The oldest president in U.S. history has a record as a campaign winner and has posted major legislative successes in recent months. But surveys of voters point to concern about his capabilities.
(AP Photo/Cal Woodward) 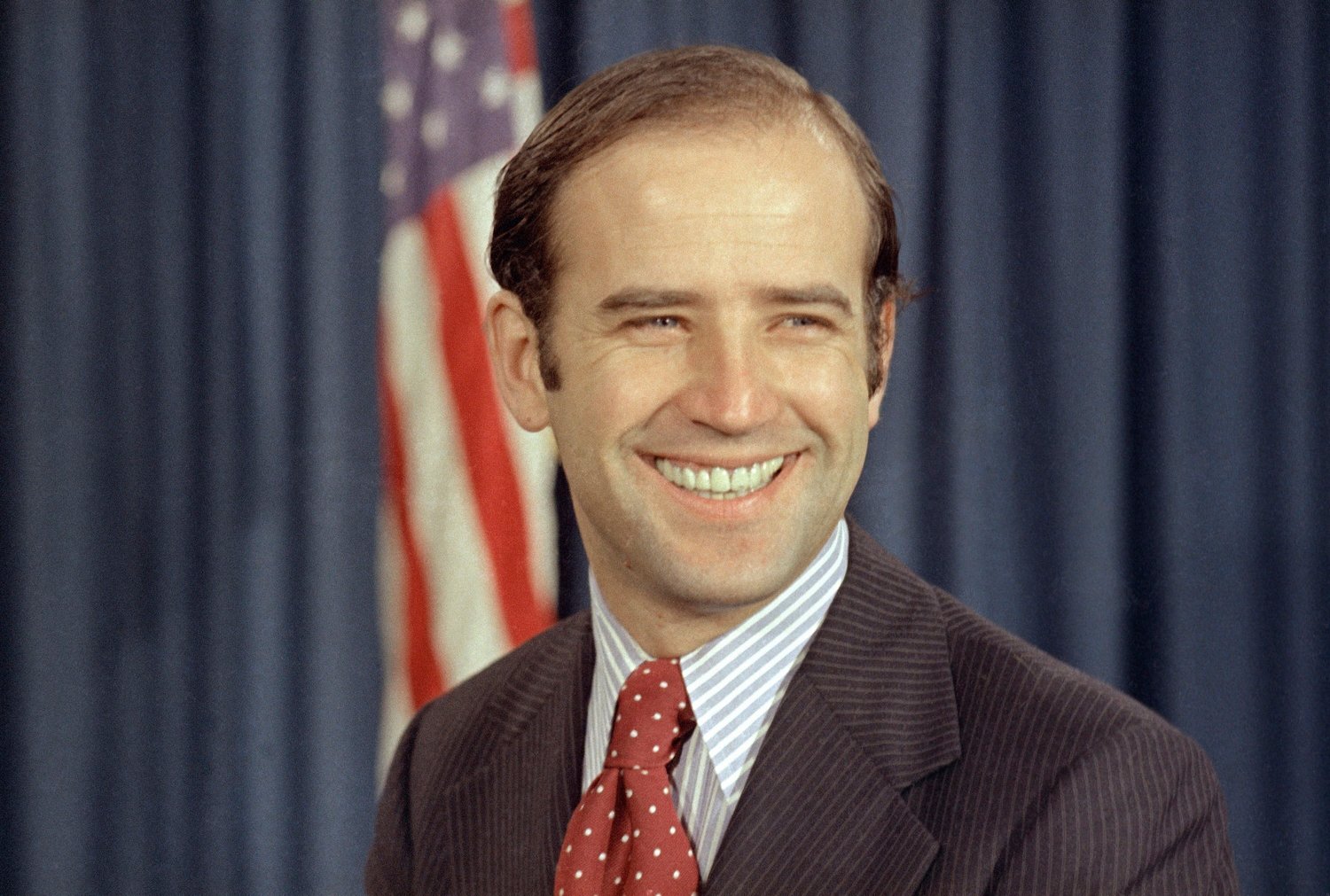 WASHINGTON — People in their 80s lead countries, create majestic art and perform feats of endurance. One entered the record books for scaling Mount Everest. It’s soon time for Joe Biden, who turned 80 on Sunday, to decide whether he has one more mountain to climb — the one to a second term as president.

Questions swirl now, in his own party as well as broadly in the country, about whether he’s got what it takes to go for the summit again.

Biden hits his milestone birthday at a personal crossroads as he and his family face a decision in the coming months on whether he should announce for reelection. He’d be 86 at the end of a potential second term.

Biden aides and allies all say he intends to run — and his team has begun quiet preparations for a campaign — but it has often been the president himself who has sounded the most equivocal. “My intention is that I run again,” he said at a news conference this month. ”But I’m a great respecter of fate.”

“We’re going to have discussions about it,” he said. Aides expect those conversations to pick up in earnest over Thanksgiving and Christmas, with a decision not until well after New Year’s.

“There is something to be said for experience,” said Dartmouth College historian Matt Delmont as he noted the dozens of global leaders in their 80s.

But to observe Biden is also to see him walk now often with a halting gait, in contrast to his trotting on stage on election night 2020.

It is to see him take a pass on a formal dinner with other world leaders without a real explanation, as happened on his trip abroad this past week, when he twice spoke of visiting Colombia when he meant Cambodia. Some supporters wince when he speaks, hoping he gets through his remarks OK.

House Speaker Nancy Pelosi’s decision, at age 82, to pull back from leadership and let a new generation rise may spill over into Biden’s thinking and that of his party as Democrats weigh whether they want to go with a proven winner or turn to the energy of youth.

Among the questions Pelosi’s move raises, said Kathleen Hall Jamieson, an authority on political communications at the University of Pennsylvania: “Even if one is highly competent and successful, is there a point at which one should step aside to give others the opportunity to lead just as others stepped aside to make it possible for you to do so?

“Pelosi’s decision makes such questions more salient in the context of Biden’s 2020 statement that he was the bridge to a new generation of leaders.”

Biden’s verbal flubs have been the stuff of legend throughout his five-decade political career, so sussing out the impact of age on his acuity is a guessing game for “armchair gerontologists,” as Dr. S. Jay Olshansky, an aging expert, puts it.

In the distorted mirrors of social media commentary, every slip is magnified into supposed proof of senility. A moment of silent reflection by Biden in a meeting is presented as the president nodding off. All of that went into Donald Trump’s quiver when he announced Tuesday he will seek the presidency again.

Some allies see Biden’s blunders as an increasing vulnerability in the eyes of voters as he’s grown older.

In an AP VoteCast survey of the electorate this month, fully 58% of voters said he does not have the mental capability to serve effectively as president. That was a grim picture of his standing now, not just looking ahead to another potential term. Only 34% said he’s a strong leader.

Those findings come alongside notably low approval ratings in league with Trump’s at this
point of their presidencies.

Two months before the 2020 election, Olshansky, at the University of Illinois, Chicago, published a paper that predicted both Biden and Trump were bound to maintain their good health beyond the end of this presidential term.

Based on a scientific team’s evaluation of available medical records, family history and other information, the paper further concluded that both men are probably “super-agers,” a subgroup of people who maintain their mental and physical functioning and tend to live longer than the average person their age.

Nothing has changed Olshansky’s mind about either of them.

“While President Biden may chronologically be 80 years old, biologically he probably isn’t,” he said. “And biological age is far more important than chronological age.” He calls Biden a “classic example of everything that’s good about aging ... and so his age, I think, should be almost completely irrelevant.”

Biden is already in the club of high achievers for people his age. Unlike 92% of people 75 and over in the U.S., he still has a job, not to mention a mightily demanding one.

And he’s been on a roll. The November elections produced the best result for a Democratic president’s party in midterms in decades — despite the poison pill of high inflation — as Democrats kept control of the Senate, narrowly lost the House in defiance of expectations of a rout, and won several competitive governors’ races in key states.

Biden says he begins most days with an 8 a.m. workout, when he is usually joined by his personal trainer and physical therapist, Drew Contreras, if he doesn’t ride his Peloton bike.

“If I let it go for a week, I feel it,” he told the “Smartless” podcast recently. “I used to be able to go for a week and nothing would change.”

White House aides say Biden reads his briefing book deep into the night, holds intensive evening meetings with advisers and has never balked at their scheduling requests that may have him out late, though rarely up early.

Yet his aides are deeply protective of the president, especially with his public schedule, which is lighter than those of Barack Obama and George W. Bush, both far younger in office. They’ve shielded him from formal interviews and, until recently, press conferences.

Biden has been diagnosed with several very common age-related health conditions, none causing him serious problems.

In his November 2021 summary of Biden’s health after the president’s first full physical in office, Dr. Kevin O’Connor noted Biden’s gait had become somewhat stiffer, something doctors watch for in older patients as it could signal a fall risk.

But after testing, the doctor concluded it’s mostly due to ongoing “wear and tear” arthritis of the spine, as well as compensation for a broken foot sustained a year earlier and the development of “mild peripheral neuropathy” or subtle damage to some sensory nerves in the feet.

Experts say age is not destiny; what matters is good health, fitness and functioning. Japanese climber Yuichiro Miura had enough of those attributes to make it to the top of Mount Everest in 2013 at age 80, setting a record that an 85-year-old Nepali man died trying to break in 2017.

Growing old is inexorable — at whatever pace, it comes.

It came at one pace for Supreme Court Justice Thurgood Marshall, for example, and it’s coming at another for Pelosi, who is another institution in town.

“What’s wrong with me?” Marshall asked upon his decision to retire from the Supreme Court at age 82, before answering: “I’m old. I’m getting old and coming apart.” (He died two years later.)

At the same age, Pelosi buzzes Capitol hallways in high heels, outpacing much younger people. And her cognitive abilities have never been in question.

The knock against her was that she blocked the highest ambitions of generations of younger lawmakers before her decision this past week not to seek reelection as House Democratic leader when Republicans take control.

Supreme Court justices, shielded from the electorate and bosses, can grow as old in the job as they want and as fate allows — and they tend to stick around. Justice John Paul Stevens retired in 2010 at age 90, attributing his decision to a small stroke while reading his Citizens United dissent from the bench.

In democracies, where voters are the boss, and in autocracies, where they’re not, plenty of people in power soldier on in their advanced years, even if few are up there like former Malaysian Prime Minister Mahathir Mohamad, who became the world’s oldest leader at 92 and is running to get the office back, at 97.

Much of the leadership in the U.S. Congress is over 70, especially Democrats, and so were Biden’s main rivals in the 2020 Democratic primaries and Trump.

Attribute that, in part, to increasing longevity.

“Life expectancy back around 1900 in the United States was about 50,” Olshansky said, “and we added about 30 years” since.

“Now, are you going to ask me, is he going to be competent in two years? Who knows? I don’t know.”

When Biden tumbled on his bicycle in Delaware in June, his foot or feet caught in the pedals’ cages, the mishap fed the perception of a president not at the top of his game physically.

“Those of us that know a little about aging were pretty impressed by the fact that he was on his bicycle to begin with ... that you’ve got somebody who is really active and healthy for his age,” said Olshansky. Instead, the focus was on his injury-free fall.