A world-class deposit of rare and unusual Herkimer Diamond quartz crystals can be found a few miles outside the city of Little Falls. 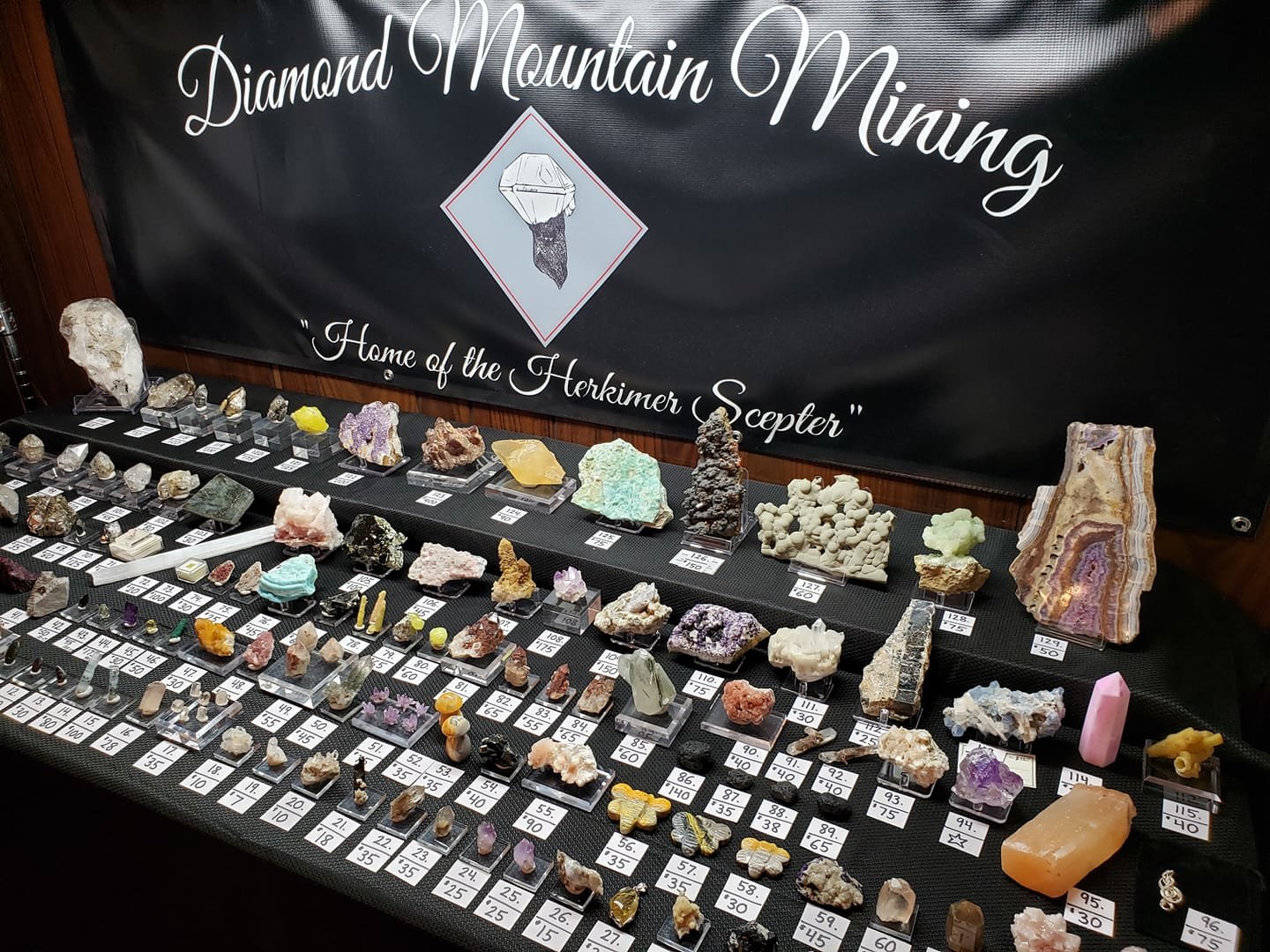 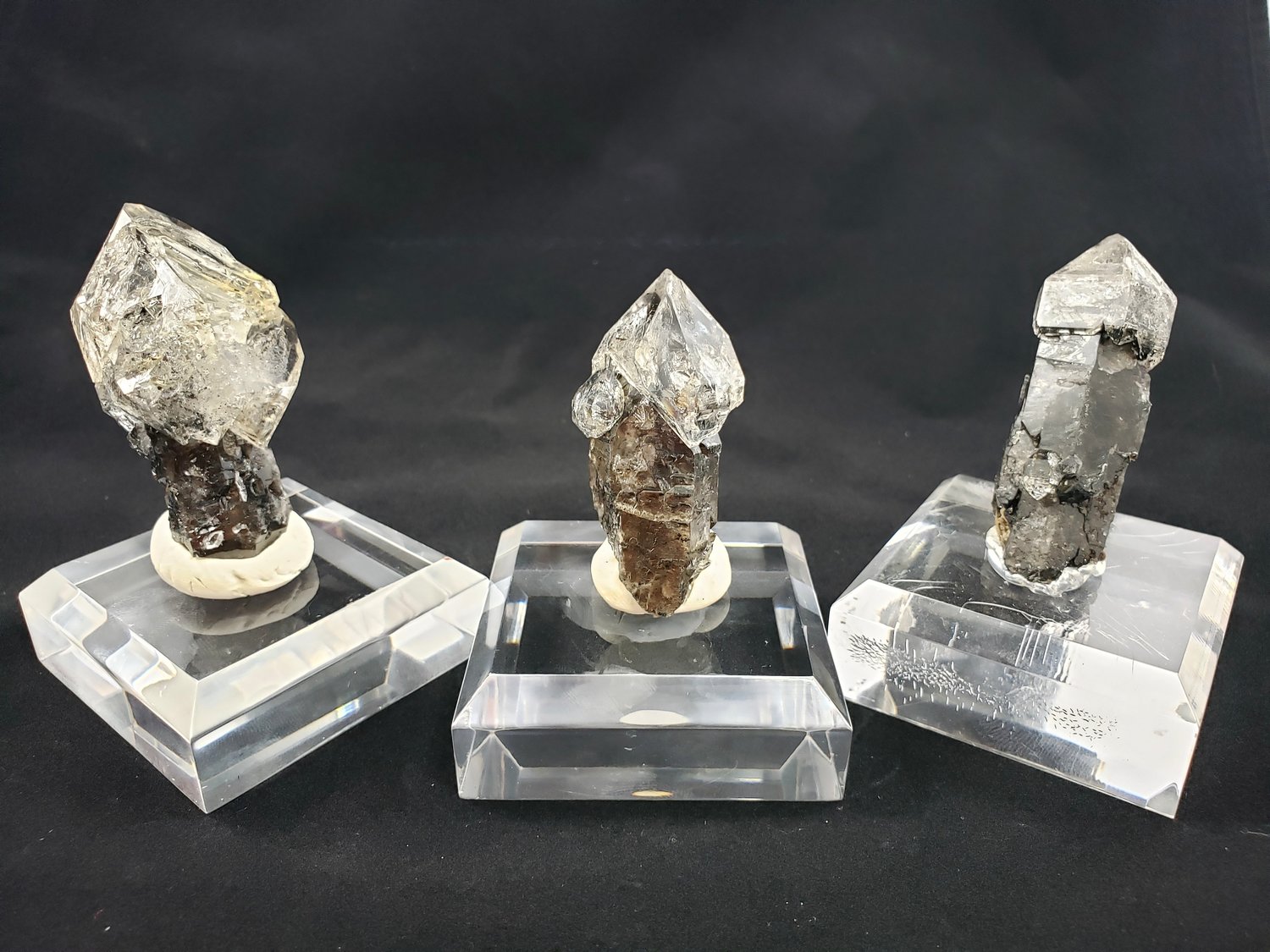 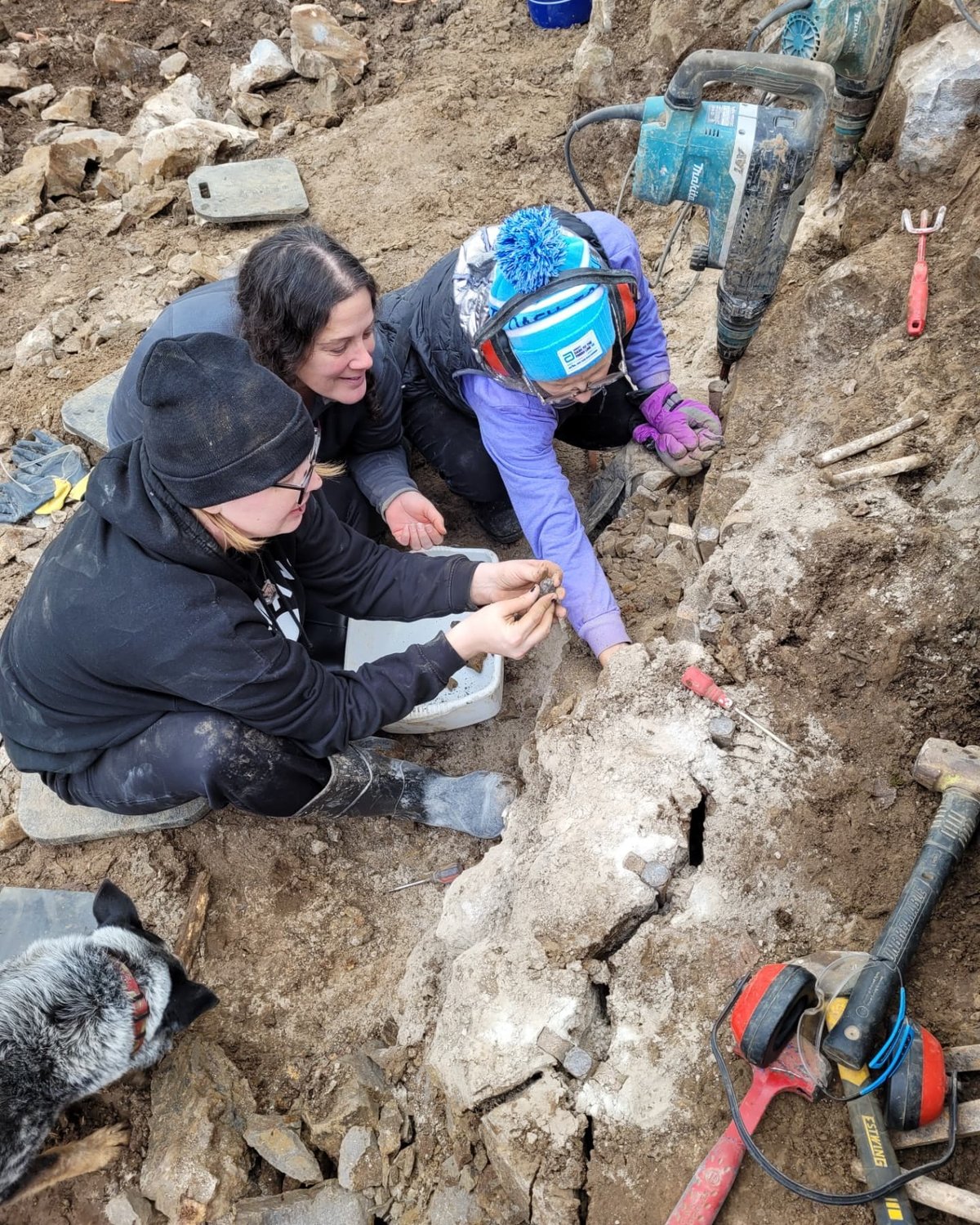 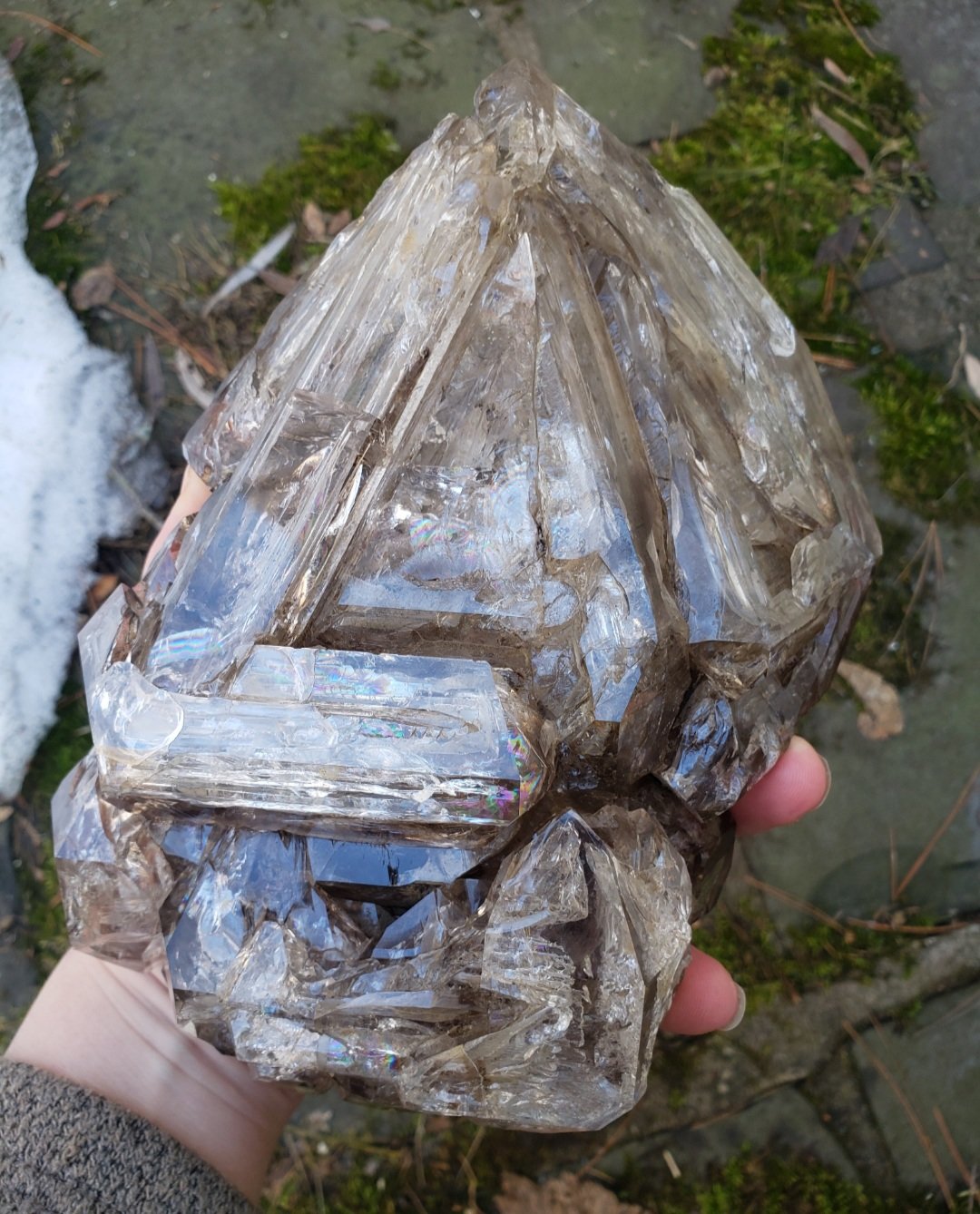 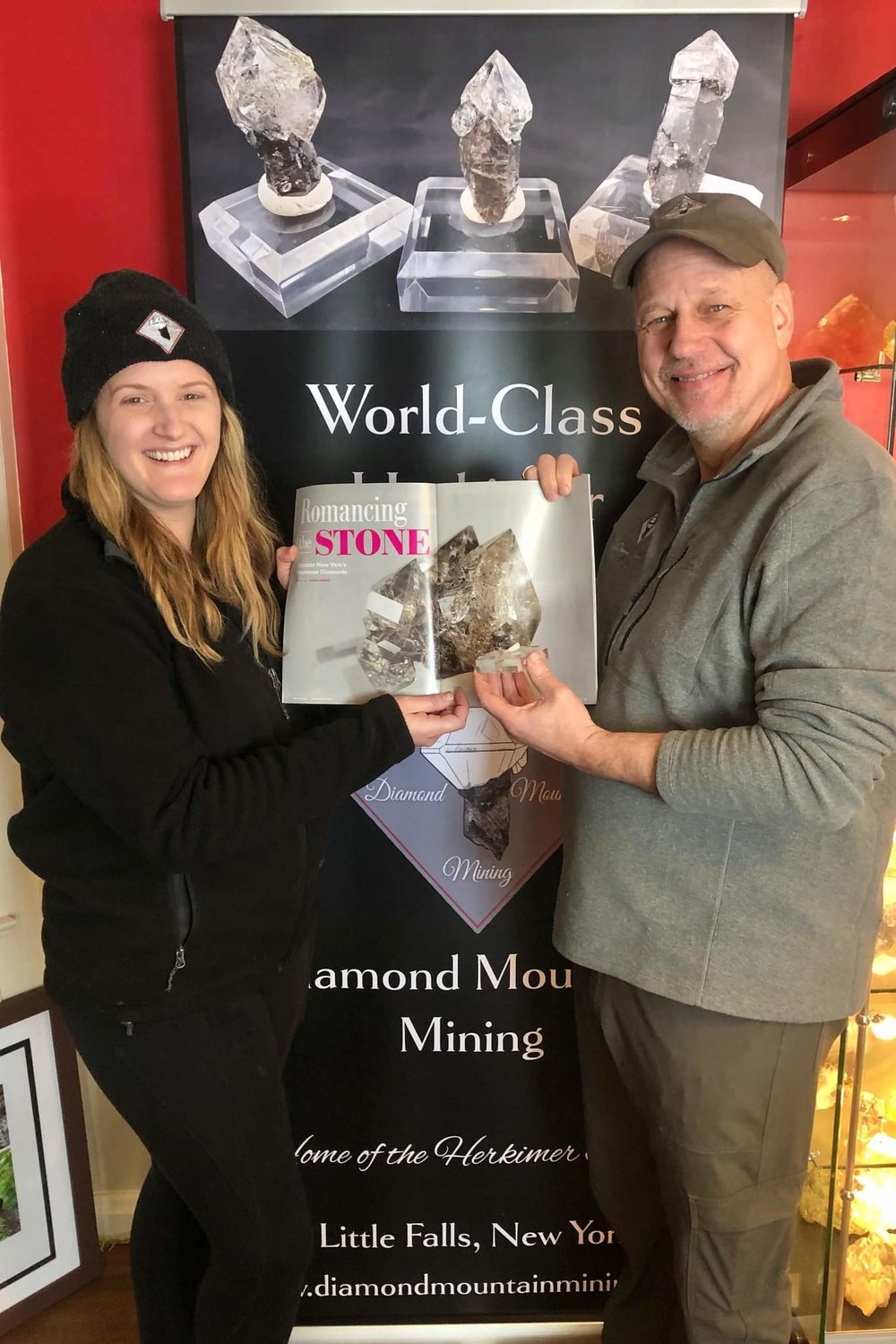 Director of sales, marketing and programs Deena Bak and Diamond Mountain Mining owner and CEO Larry Michon hold up a copy of the February Rock and Gem issue in which the mine was featured.
(Courtesy of Diamond Mountain Mining)
Previous Next
Posted Thursday, July 21, 2022 2:00 pm
Donna Thompson, Special to the Daily Sentinel

LITTLE FALLS — A world-class deposit of rare and unusual Herkimer Diamond quartz crystals can be found a few miles outside the city of Little Falls.

And while many area residents don’t know of its existence, Diamond Mountain Mining LTD, at 5037 State Route 167, Little Falls, is open for business and has already been drawing rockhounds - by reservation - from as far away as Colorado, Arizona and Canada to dig for the crystals.

In addition to the clear Herkimer Diamond crystals for which the Herkimer County area is known, the mineral deposit on this property contains unique forms of the crystals not found at other locations in the area including the rare black-stemmed scepters and gem barbell formations, according to Deena Bak, director of sales, marketing and programs. The deposit also yields hydrocarbon-included “black diamond” quartz, the result of material being trapped inside the crystal during formation, and large skeletal crystals, another rare formation.

“The black-stemmed scepters are the rarest of the rare,” she said. “They’re only found in Little Falls and St. Johnsville.” These are crystals that form on top of a rod of solidified hydrocarbon surrounded by quartz crystal.

Diamond Mountain Mining got its start when owner and CEO Larry Michon, a rockhound and mineral enthusiast, began looking for a piece of land containing Herkimer diamonds so he could have his own claim to dig when he retires. He has a CPA and business consulting office in the Berkshires of Western Massachusetts and manages his multi-site rental property business in that area.

Michon has been collecting minerals as a hobby since the 1990’s and began digging Herkimer Diamonds when a friend introduced him to hard rock mining at Diamond Acres in Fonda.

Instead of finding an acre or two of property to mine, his search resulted in the purchase of the large house on Route 167 which was formerly owned by Attorney George Aney and is situated on an approximately 60-acre parcel known locally as the Million Dollar Mountain because of the quality of crystals known to be there. The property also boasts forest trails and a spring-fed waterfall as well as stunning views of the Mohawk River.

Rather than just work the land himself, Michon decided to also offer the opportunity to dig for crystals to other mineral enthusiasts and turn the site into a destination for rockhounds.

He purchased the property in 2019 and work on the house and property has continued since then. COVID-19 slowed progress and permits were needed, according to Bak. They added an access road to the mining area and put together plans for safety and for remediation of the land.

“We want to be good stewards,” she said.

Work is currently underway to create bed and breakfast suites at the house so overnight accommodations will be available for guests.

The digging program and planned bed and breakfast are two of the three aspects of the Diamond Mountain project, Bak explained.

The third is the sales company, which offers some of the finds that Diamond Mountain personnel dig on the property as well as other treasures, such as those she and Michon brought back from a recent dig at Hallelujah Junction, a scepter and smoky quartz mine on the California-Nevada border.

Bak conducts sales twice a week on Facebook Live with collectors joining the events and purchasing the priced items. About 100 people logged on for a recent live sale, she said.

Items ranging from minerals to apparel can also be ordered from the Diamond Mountain website, found at: diamondmountainmining.com.

Bak said she and Michon considered traveling to rock and gem shows to sell their items, but decided in favor of online and live sales events instead and it has worked well for them.

There is still plenty of work to prepare for a sale. The minerals must be washed, soaked, sorted and graded for value, trimmed and sometimes repaired, since not all pieces emerge from the earth intact - a lot of freezing, thawing and earth movement can happen in 450 million years, Bak pointed out. If repairs are needed, a museum-quality epoxy is used.

After the sale, the minerals must be boxed and shipped to buyers.

For those who want to dig their own treasures, Adventure Digs for ages 14 and older are offered at $100 a person with a limit of 15 diggers in the mining area at one time. Reservations are required. While Diamond Mountain will be hosting some family events, Bak expects most of the regular guests will be adults with a passion for mining and collecting rare mineral formations.

The price of admission includes an introductory tour covering the basics of Herkimer Diamond geology and commercial hard rock mining and a dig site orientation. Guides will give tips on how and where to look for crystals, although Bak points out there are no guarantees. Both luck and skill are involved in the search.

Hard Rock Mining School guides are available for half-day workshops with any visit.

Education is an important part of the programs at Diamond Mountain, according to Bak, who worked for nearly a decade in the field of Museum Education. She got involved in rockhounding after joining the Northern Berkshire Mineral club in 2017.

“It was a hobby and now it’s my work, but it’s work that feels like play,” she said, adding that she especially loves seeing the excitement of guests as they celebrate their finds. “It’s an infectious joy.”

Another option is the $1,500 Crystal Quest mining experience that allows a private group to rent the main mine for a day, and watch Diamond Mountain’s professional miner, Jason Urbiss, drill and crack open the hard dolostone host rock to find a Herkimer Diamond pocket. The group will have the entire mine to themselves, and will also be invited to search through this usually off-limits site’s tailings piles for treasure as well as getting to pry pieces of ledge away to search for and open their own pocket.

Diamond Mountain received some welcome exposure among the rockhound community when the mine and many of its heart-shaped Herkimer crystals were featured in February 2022 Rock & Gem Magazine.

Bak is also seeking to get word of the new mine out to the local community. The business has already created several new full- and part-time jobs, she said, and visitors coming to dig will benefit local businesses as well. Plans are also underway for a Diamond Festival in Little Falls in the spring of 2023. The crystals were called Little Falls Diamonds before they became known as Herkimer Diamonds, she pointed out.

“Little Falls itself is up and coming and we’re happy to be a part of the renaissance,” said Bak.