For 30 years, math teacher William Angell drilled into his students the importance of precision and accuracy, skills he honed in mastering the construction of intricate craftsman style furniture. Two … 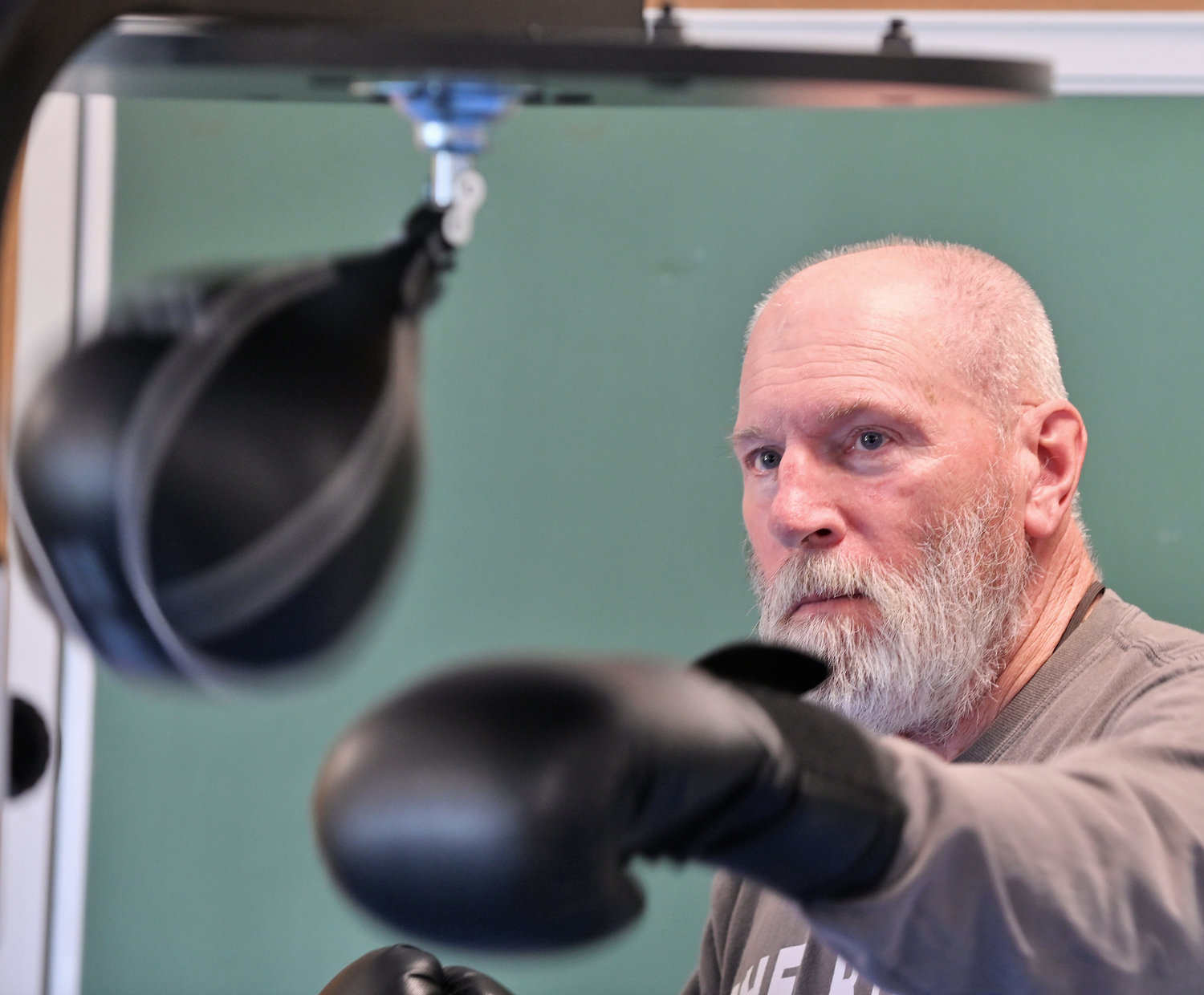 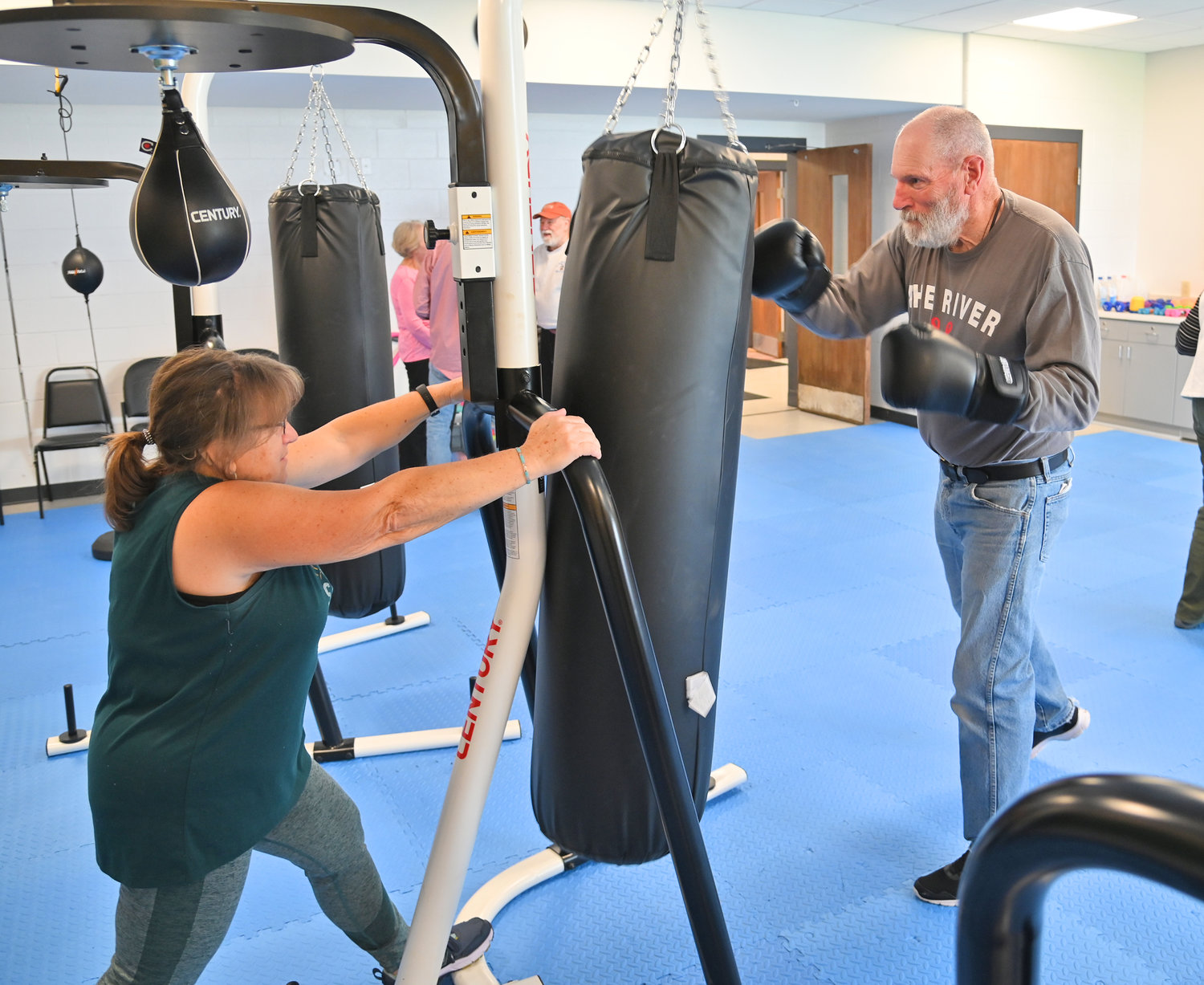 Tom Cartrucko punches away at the bag at 50 Forward Mohawk Valley with Denise Spagnola holding it down for him.
(Sentinel photo by John Clifford) 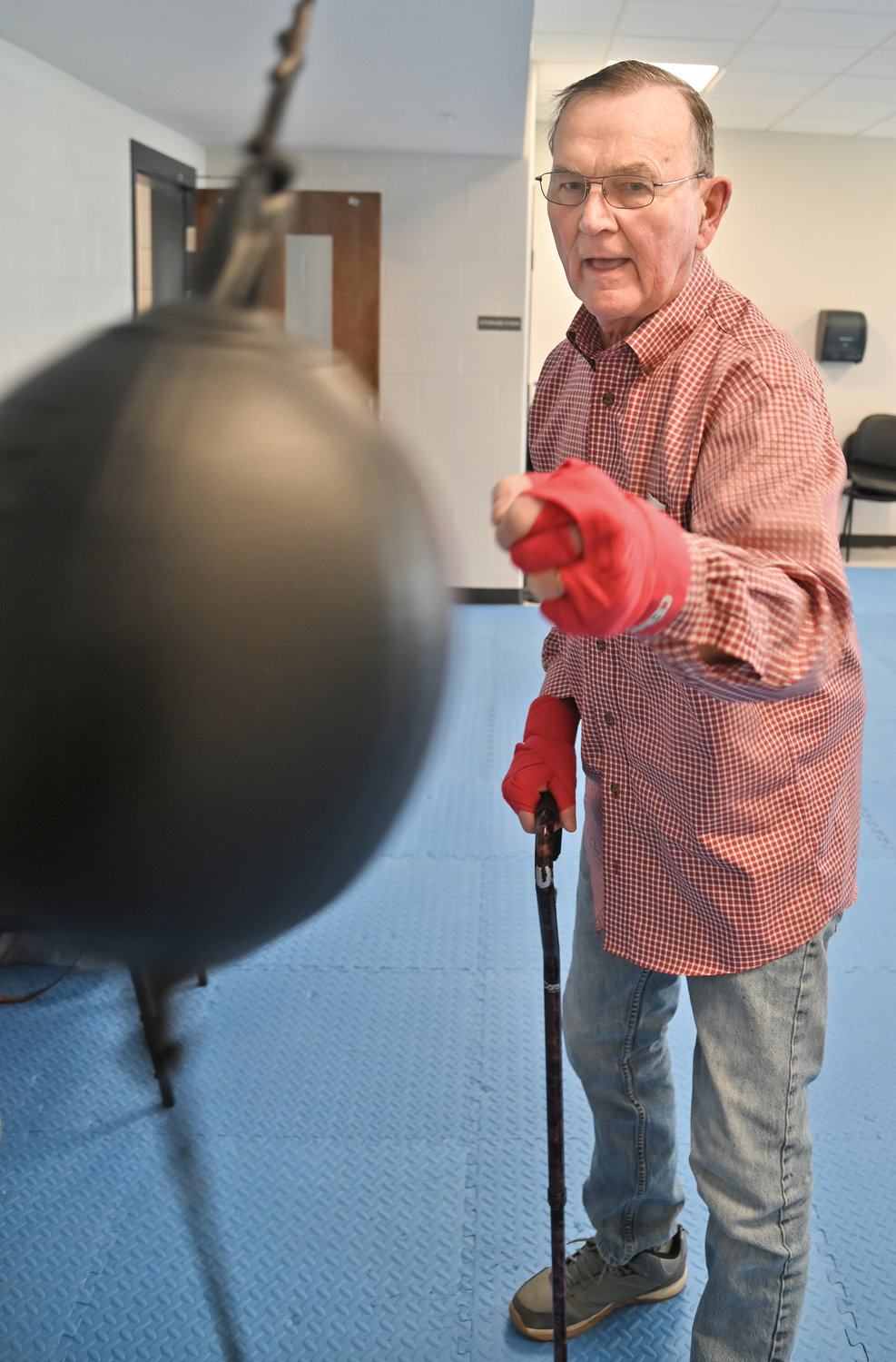 William Angell slugs the speed ball before he puts the boxing gloves on to hit the bag.
(Sentinel photo by John Clifford) 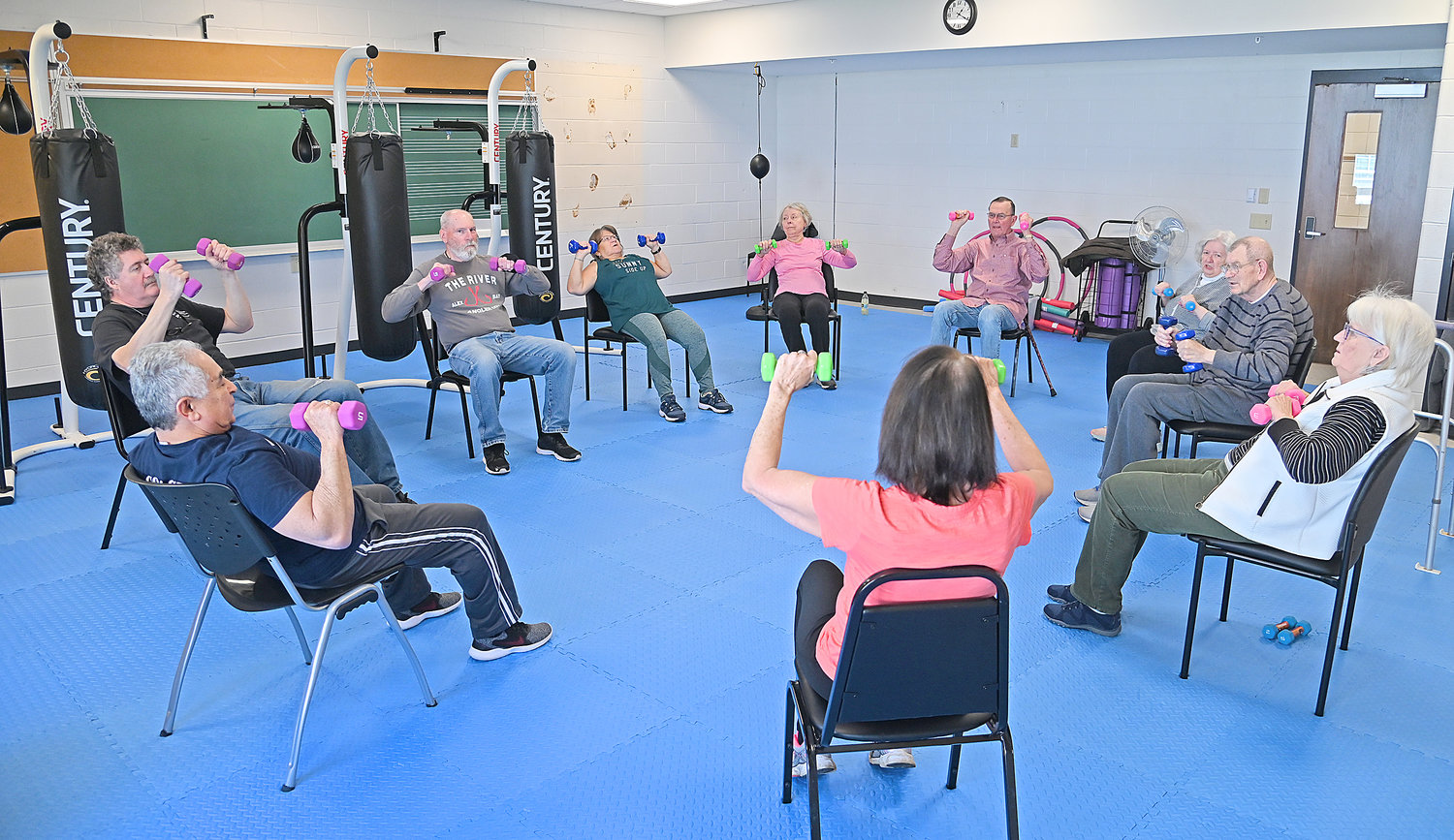 Rock Steady Boxing program coach Angel Heredia starts the class out with a series of exercises to get to the blood flowing for the class at 50 Forward Mohawk Valley in Verona Beach.
(Sentinel photo by John Clifford) 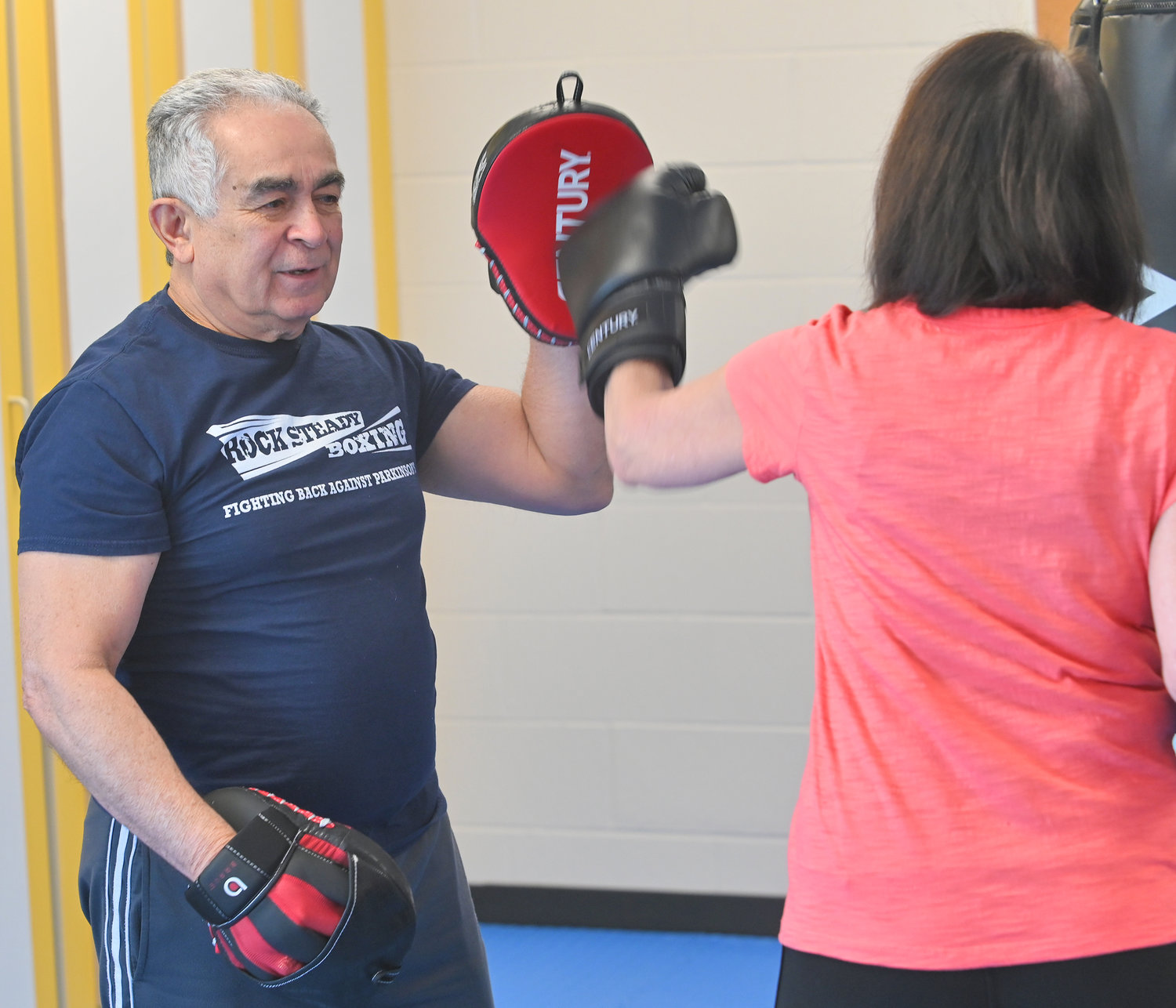 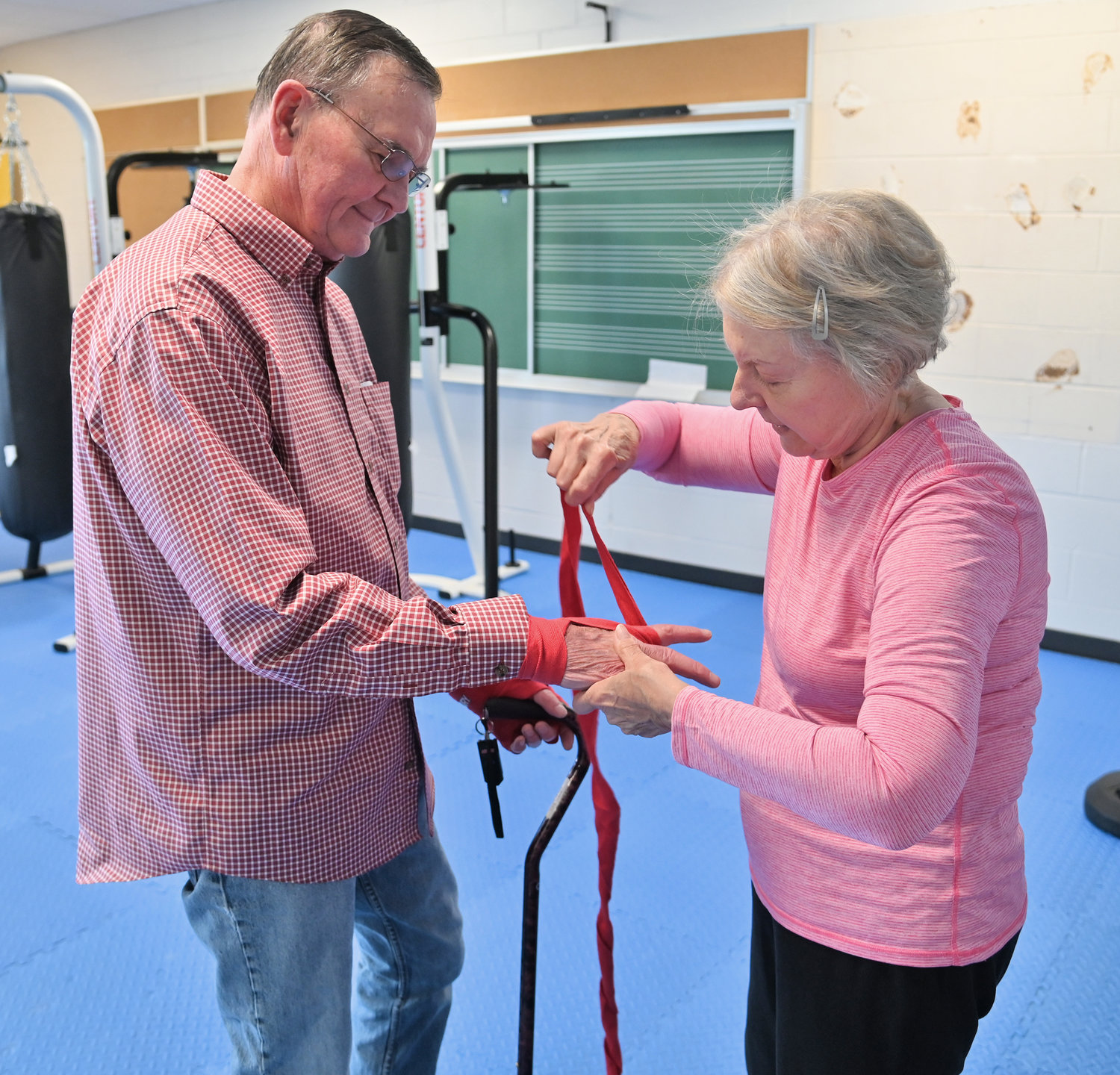 William Angell gets his hands wrapped by his wife, Carolyn, before he puts the boxing gloves on to hit the bag.
(Sentinel photo by John Clifford) 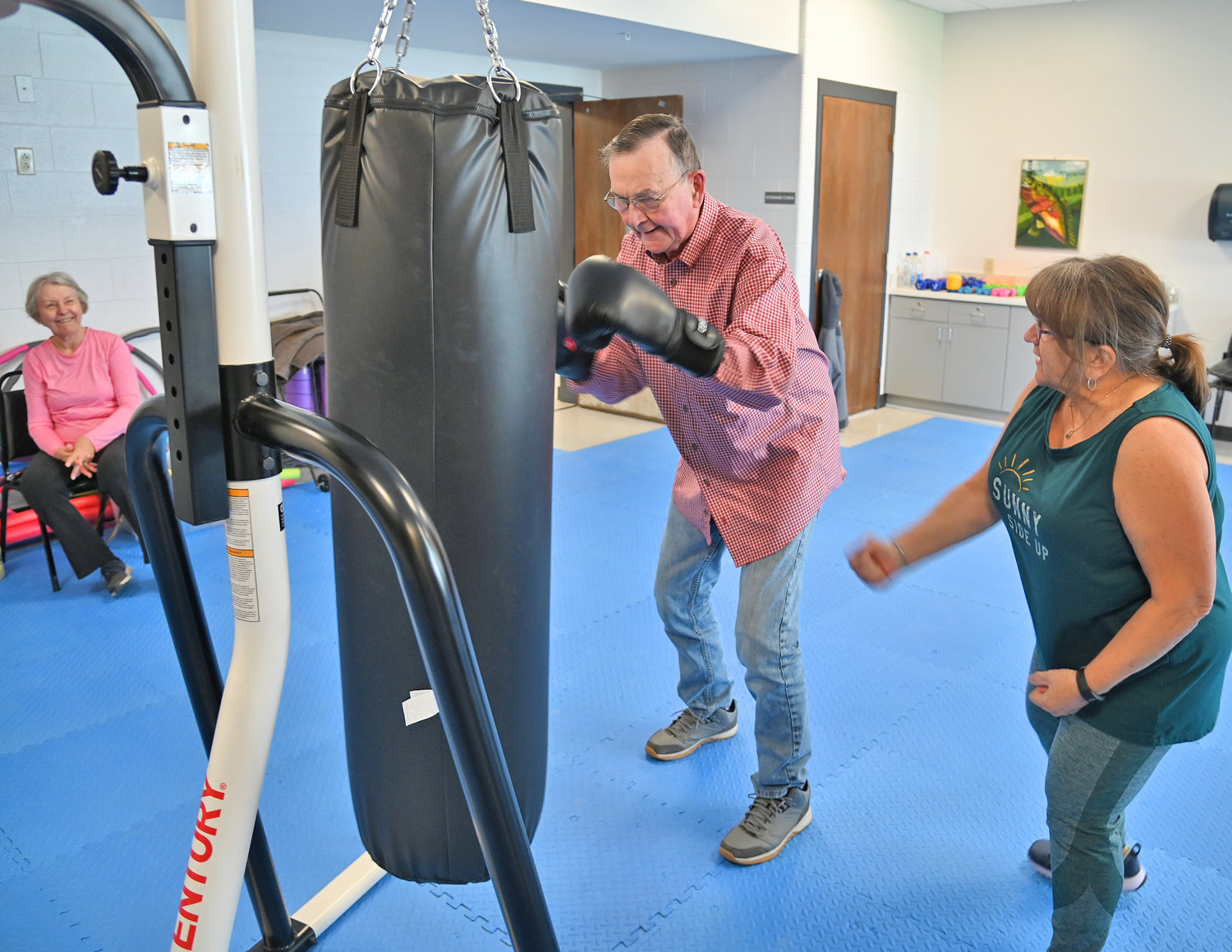 William Angell boxes the bag with Denise Spagnola urging him on and his wife, Carolyn, sitting in the background.
(Sentinel photo by John Clifford)
Previous Next
Posted Sunday, May 15, 2022 7:50 am
Philomena Lawrence, Special to the Daily Sentinel

For 30 years, math teacher William Angell drilled into his students the importance of precision and accuracy, skills he honed in mastering the construction of intricate craftsman style furniture.

Two years ago, the onset of Parkinson’s disease forced Angell to shelve his avocation – and his carpentry tools.

“It became increasingly difficult to use the chainsaw, for example, but I am determined to regain my strength and coordination,” avows the 78-year-old North Bay resident, who attends the newly established Rock Steady Boxing classes at the 50 Forward Mohawk Valley, 6734 NYS Route 13, in Verona Beach, one of almost 900 Rock Steady Boxing locations worldwide. His wife, Carolyn, assists him during the routines, designed to help mitigate, delay, and even reverse the progression of Parkinson’s disease.

According to the Parkinson’s Foundation, approximately 60,000 Americans are diagnosed each year, nearly one million currently live with the disease and that number is expected to rise to 1.2 million by 2030. In Oneida County, the age-adjusted death rate from Parkinson’s disease is 6.63 per 100,000 total population. Oneida County ranks 15th in New York State. According to the 2022 release by the National Center for Health Statistics, the state mortality rate is 7.2 per 100,000 total population.

Dr. Ramesh Cherukuri, a neurologist at Slocum-Dickson Medical Group, states, “People with Parkinson’s disease face mobility, flexibility and rigidity issues, and it is important for them to keep physically active as much as and for as long as possible. My patients love the Rock Steady Boxing program, which helps them with balance, endurance and agility.”

The Verona Beach classes take place from 1 to 2:30 p.m. Wednesdays. The classes combine strength-building exercises with games that develop coordination and concentration.

At a recent class, frequent peals of laughter echoing in the brightly lit, 30-by-30-foot room reflect the lively camaraderie between the six participants. Coach Angel Heredia’s rigorous session begins with warm-up and weight-lifting routines, followed by “fun and games,” and ends with non-contact boxing. Using humor, he constantly encourages the participants to push themselves farther than they have before. “But don’t kick so high you leave shoe marks on the ceiling,” he jokes.

During one particularly challenging session, attendees keep pastel-colored balloons afloat by striking them with equally colorful sponge noodles. For their “final round,” they wrap their knuckles and wrists with elastic bands, don boxing gloves and practice jabs and hooks, or punch water-filled boxing bags and pear-shaped speed bags. Additional workout items – jump ropes, hand and ankle weights, as well as hula hoops – are also available.

The story behind Rock Steady Boxing is as heart-warming as it is inspiring. It begins with Scott C. Newman, an Indiana-based county prosecutor who was diagnosed with Parkinson’s at the age of 40. His friend, Vince Perez, a Golden Gloves boxer, designed a boxing-based fitness curriculum for Newman. Over time, Newman showed remarkable improvement in coping with the disease. In 2006, the duo founded Rock Steady Boxing to help others – from the newly diagnosed to those living with the disease for decades.

For Jeanne Stone, 73, diagnosed one year ago, the program offers both physical and emotional benefits. She notes appreciatively, “The classes are fun, invigorating, and I have developed confidence in myself as well as improved my coordination.” As Heredia, who converses in English and Spanish, observes, “My satisfaction comes from being able to relate to a range of emotions from a caregiver’s tears to a boxer’s laughter. Seeing the class do things they did not think they could do is priceless.”

Angell plans to apply his increasing dexterity to honing his angling skills. “Carolyn and I want to enjoy each other’s company and go fishing in nearby Oneida Lake.” As for Carolyn, perhaps her gratitude for Heredia reflects that of all participants in his class when she states without hesitation, “We give coach Angel an ‘A Plus’ for his dedication and professionalism. He is a wonderful and caring person.”