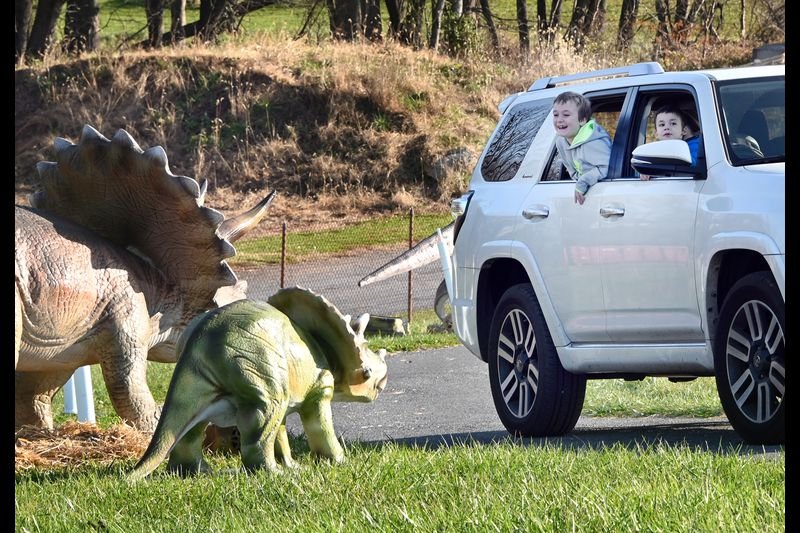 KEEP SMILING — A pair of youngsters enjoy a pair of animatronic dinosaurs during a drive-through dinosaur exhibit in this Jurassic Wonder file photo. Luckily, for the tots, the pair were herbivores — and not blood-thirsty carnivores.
(Photo courtesy Jurassic Wonder) 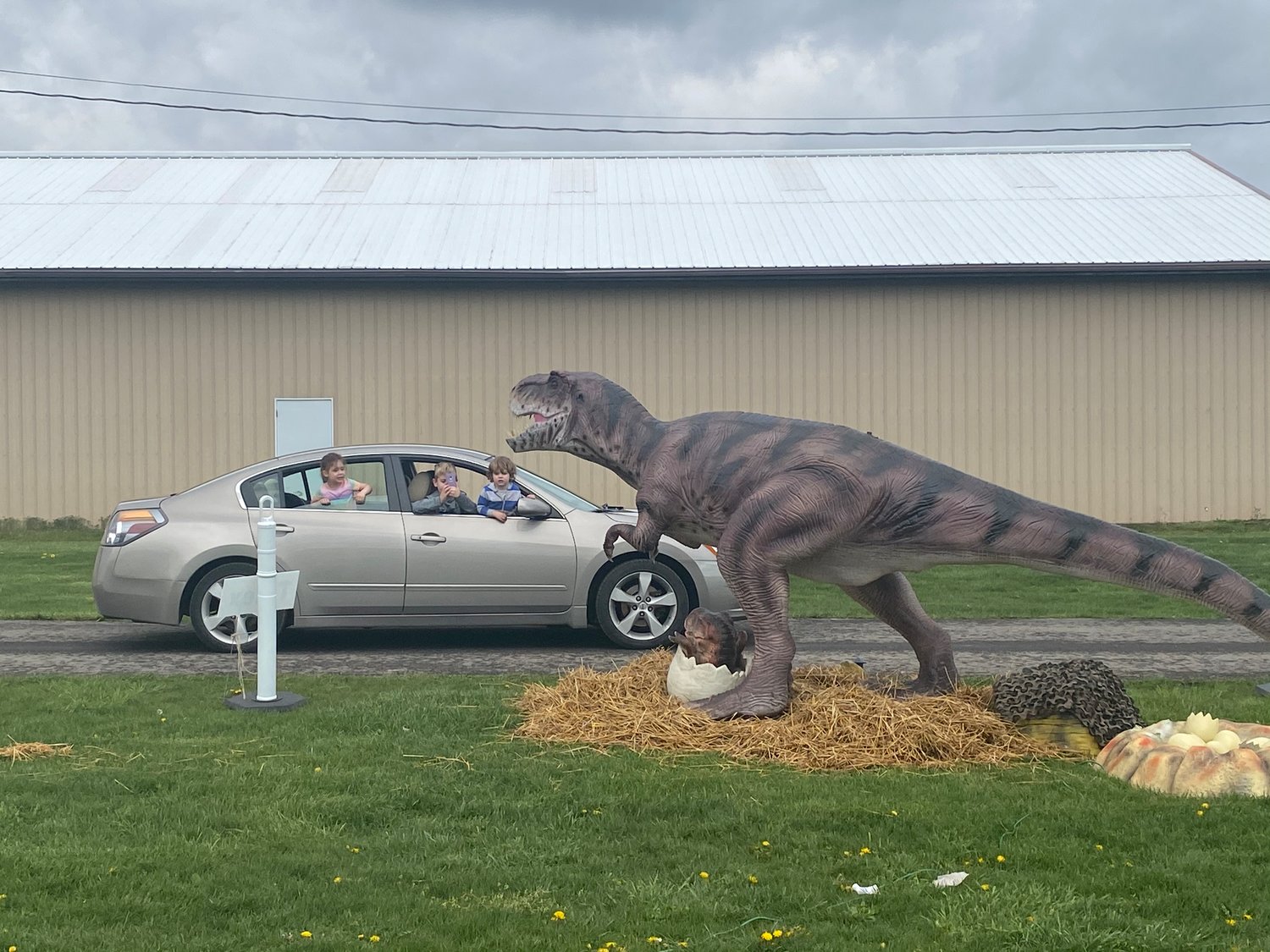 GRRRR! — A trio of youngsters gets an up-close look at an animatronic dinosaur, and its baby, during a previous Jurassic Wonder drive-through event. The lifelike creatures will be in Boonville, at the Boonville-Oneida County Fairgrounds, Saturday and Sunday, Oct. 9-10.
(Photo courtesy Jurassic Wonder) 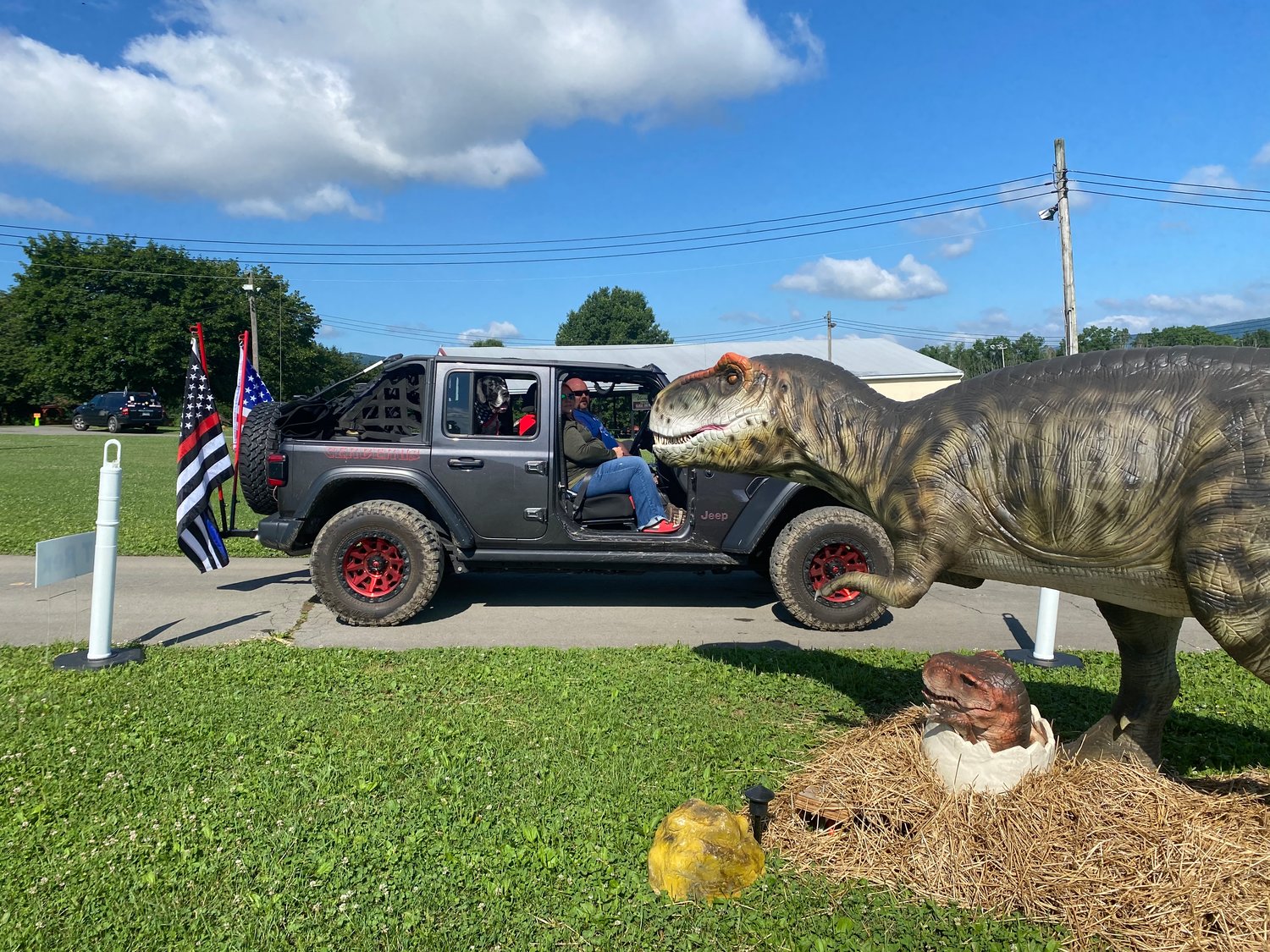 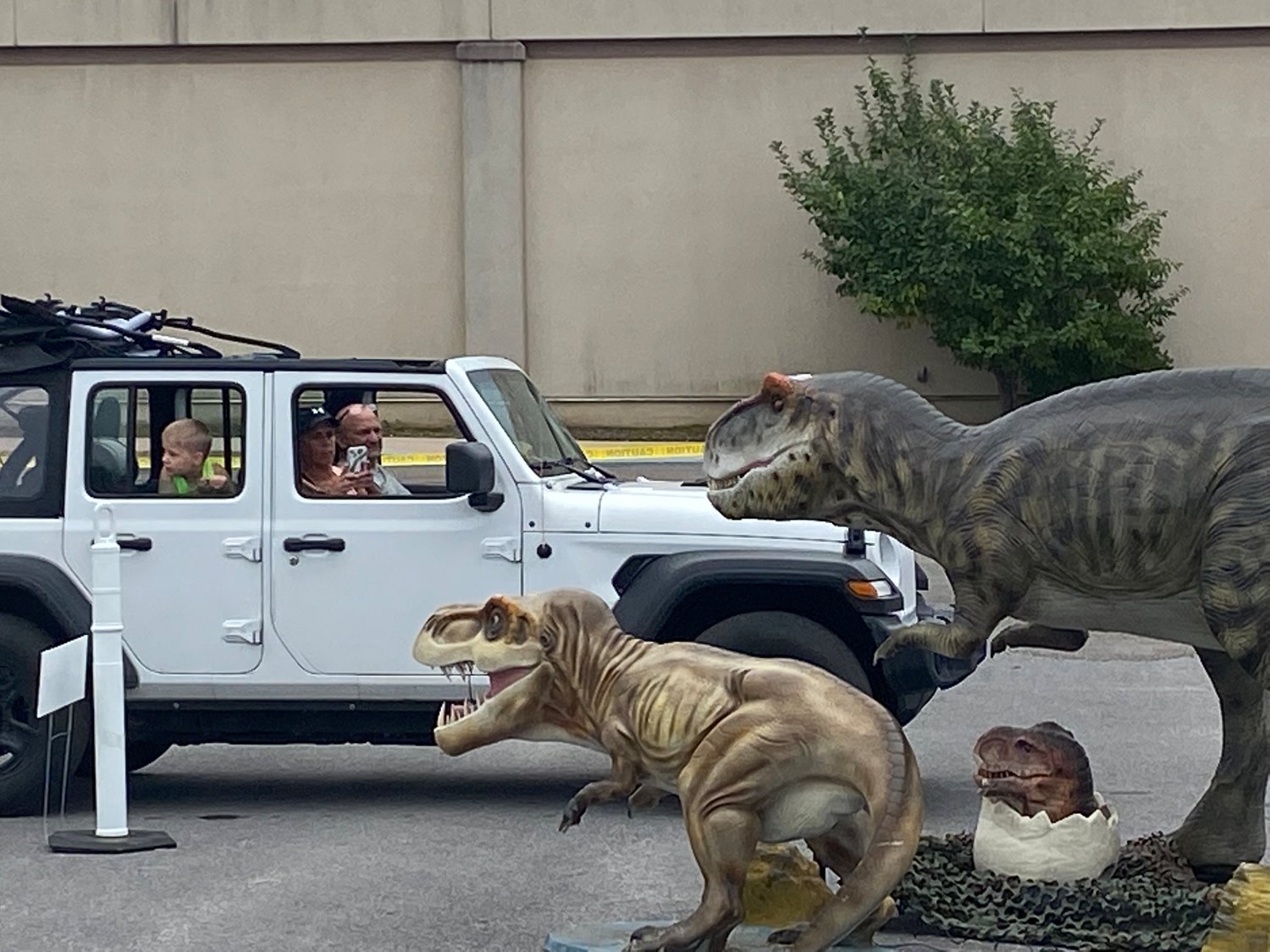 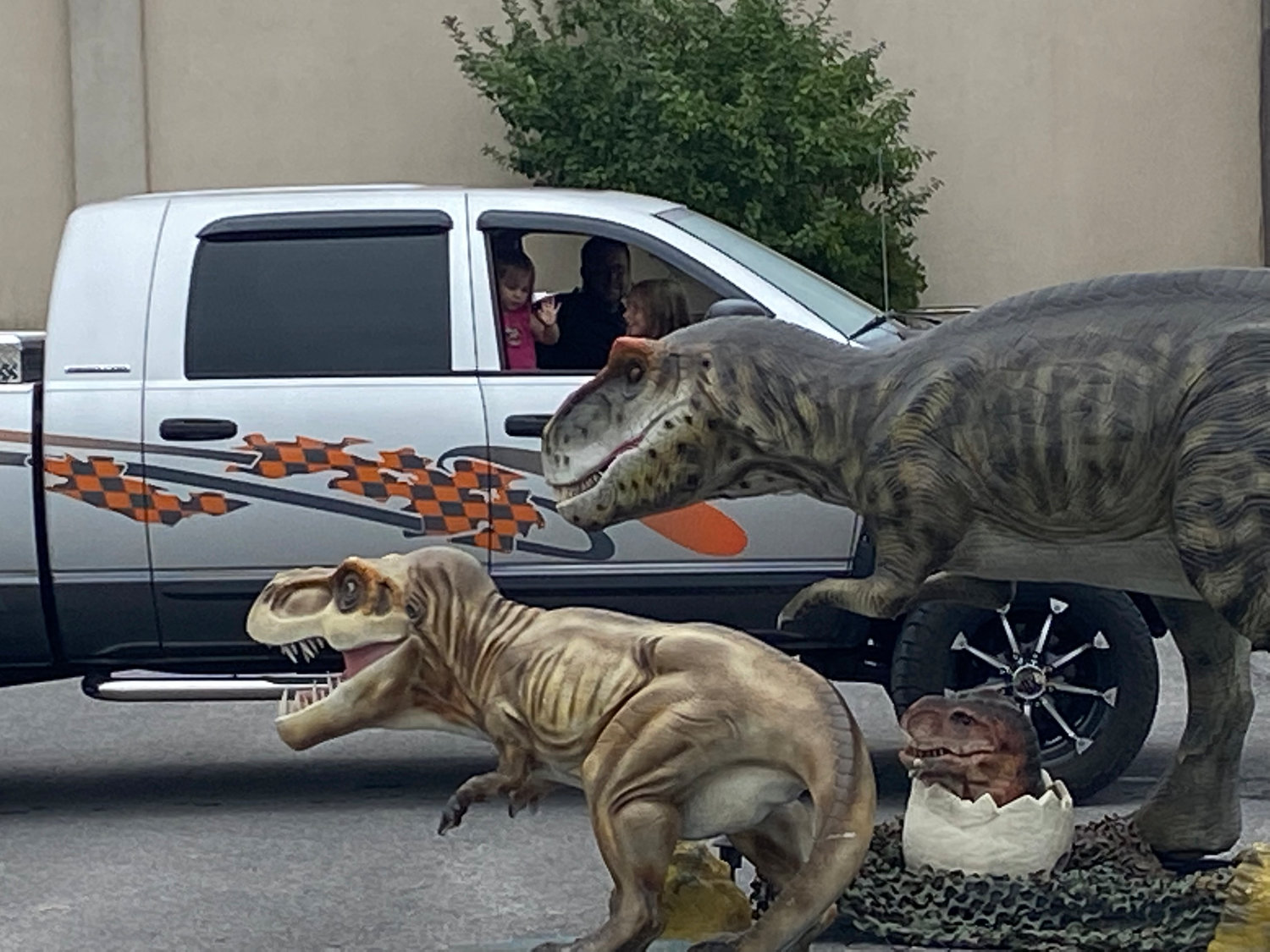 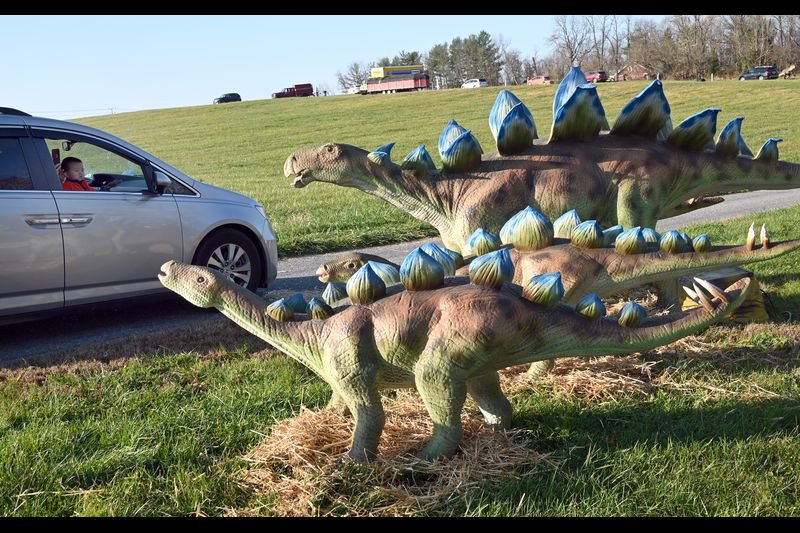 BOONVILLE — Visitors to the Boonville-Oneida County Fairgrounds should be on the lookout for some prehistoric creatures set to “invade” the village landmark later this month.

A Jurassic Wonder dinosaur drive-through event will be held at the Fairgrounds, 222 Schuyler St., on Saturday and Sunday, Oct. 9-10, from 10 a.m. to 5 p.m

The educational and entertainment dinosaur exhibit — featuring a host of animatronic dinosaurs that move and make sounds — is geared toward children ages 1 to 12.

“We decided to do this a few years ago because of the growing interest in dinosaur movies and shows, and schools are teaching kids more about dinosaurs and using them as a gateway to other subjects such geography, history and paleontology,” said Ted Hill, president of Theodore Productions, which produces Jurassic Wonder.

“We used to do these shows indoors, but with COVID we decided to make it so people could still see them in safe way,” Hill said. “We’re finding that people enjoy this in their car because families are together.”

The dinosaurs in the event, Hill said, are life-like in appearance.

Featured in the exhibit are dinosaurs that are more recognizable to children and adults such as stegosaurus, triceratops, iguanodon, pteranodon, tyrannosaurus, carnotaurus, velociraptor, parasaurolophus and wuerhosaurus, Hill said.

There are hourly time slots available to ensure lines don’t become too long.

“On the tour, there’s an audio app that we have, so when you pull up to each dinosaur you can hear a minute explanation on that dinosaur – what it’s famous for, what it ate, how big it was and when it went extinct,” Hill said. “That’s interesting and provides the educational value.

In addition, a souvenir stand will be set up selling dinosaur stuffed animals and inflatables.

“We hope people will have fun and a good time together,” Hill said. “This is something different where you don’t have to travel hundreds of miles to go see.”

Tickets are limited, and it’s recommended they be purchased in advance at www.jurassicwonder.com.