In early November, Hays Culbreth’s mother sent a poll to a few family members. She said she could only afford to make two sides for their group of 15 this Thanksgiving. 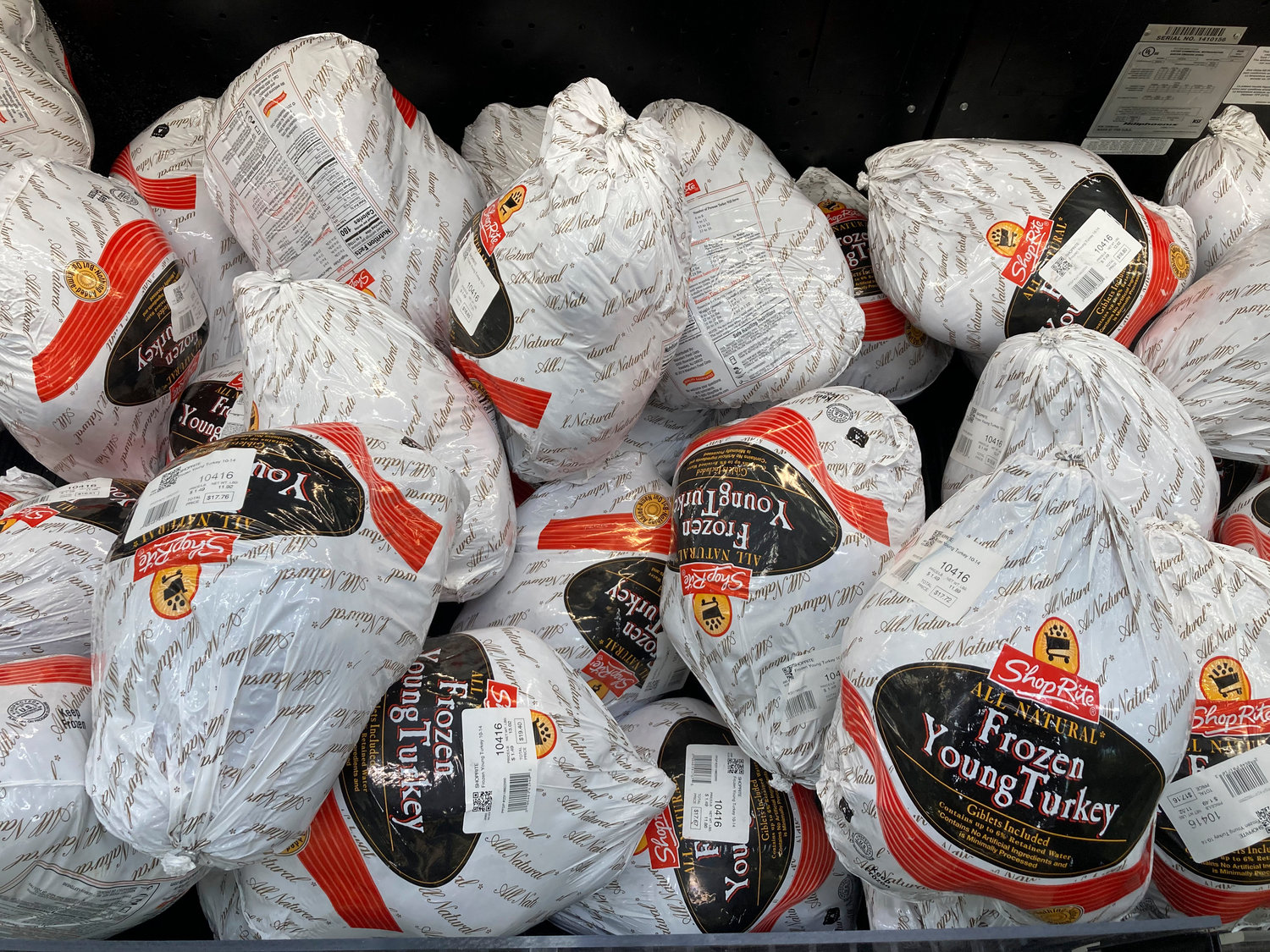 Americans are bracing for a costly Thanksgiving this year, with double-digit percent increases in the price of turkey, potatoes, stuffing, canned pumpkin and other staples.
(AP Photo/Matt Rourke, File) 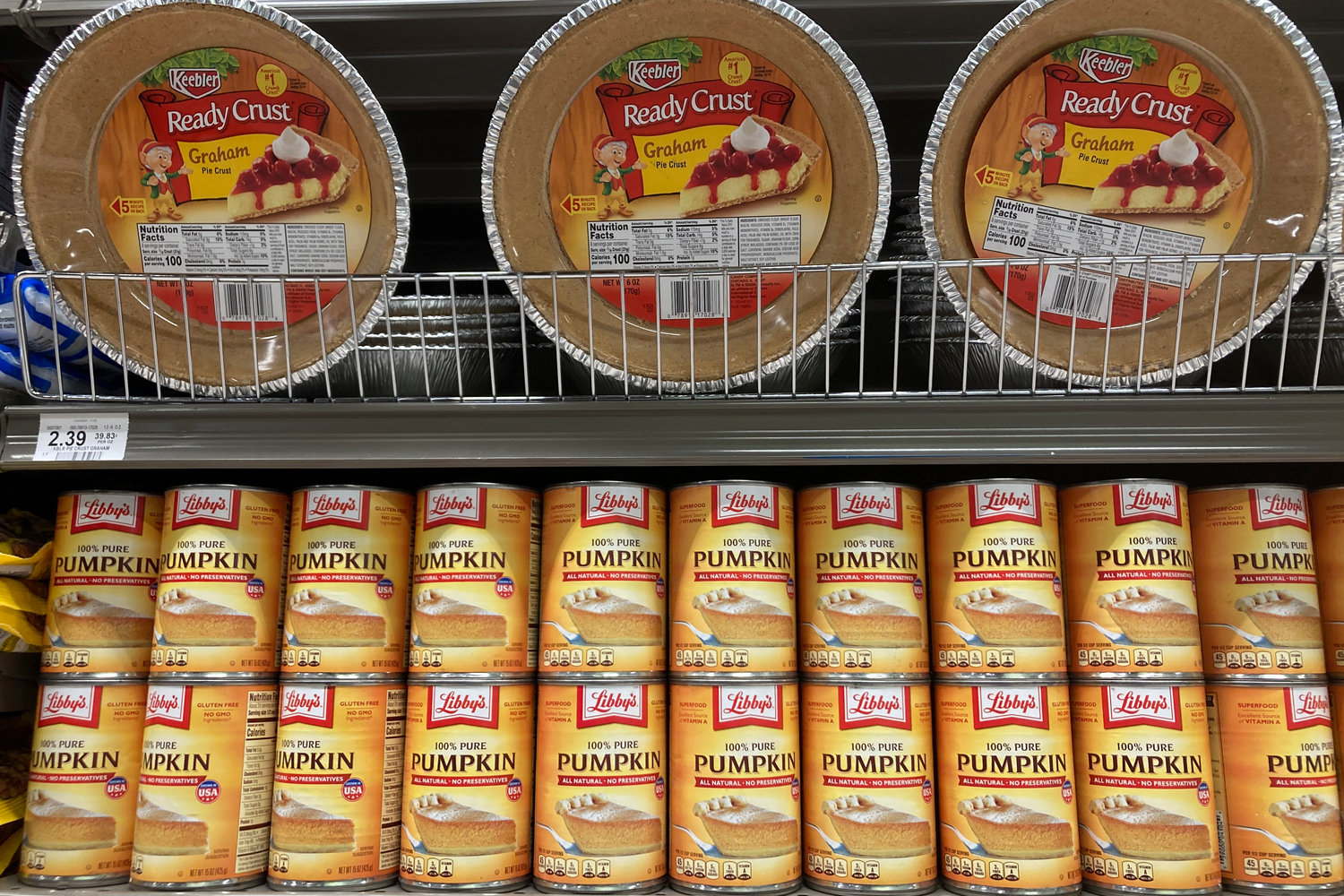 File - Canned pumpkin and graham cracker shell crusts are displayed at a Publix Supermarket, Tuesday, Nov. 16, 2021 in North Miami, Fla. Americans are bracing for a costly Thanksgiving this year, with double-digit percent increases in the price of turkey, potatoes, stuffing, canned pumpkin and other staples. (AP Photo/Marta Lavandier, File)
AP 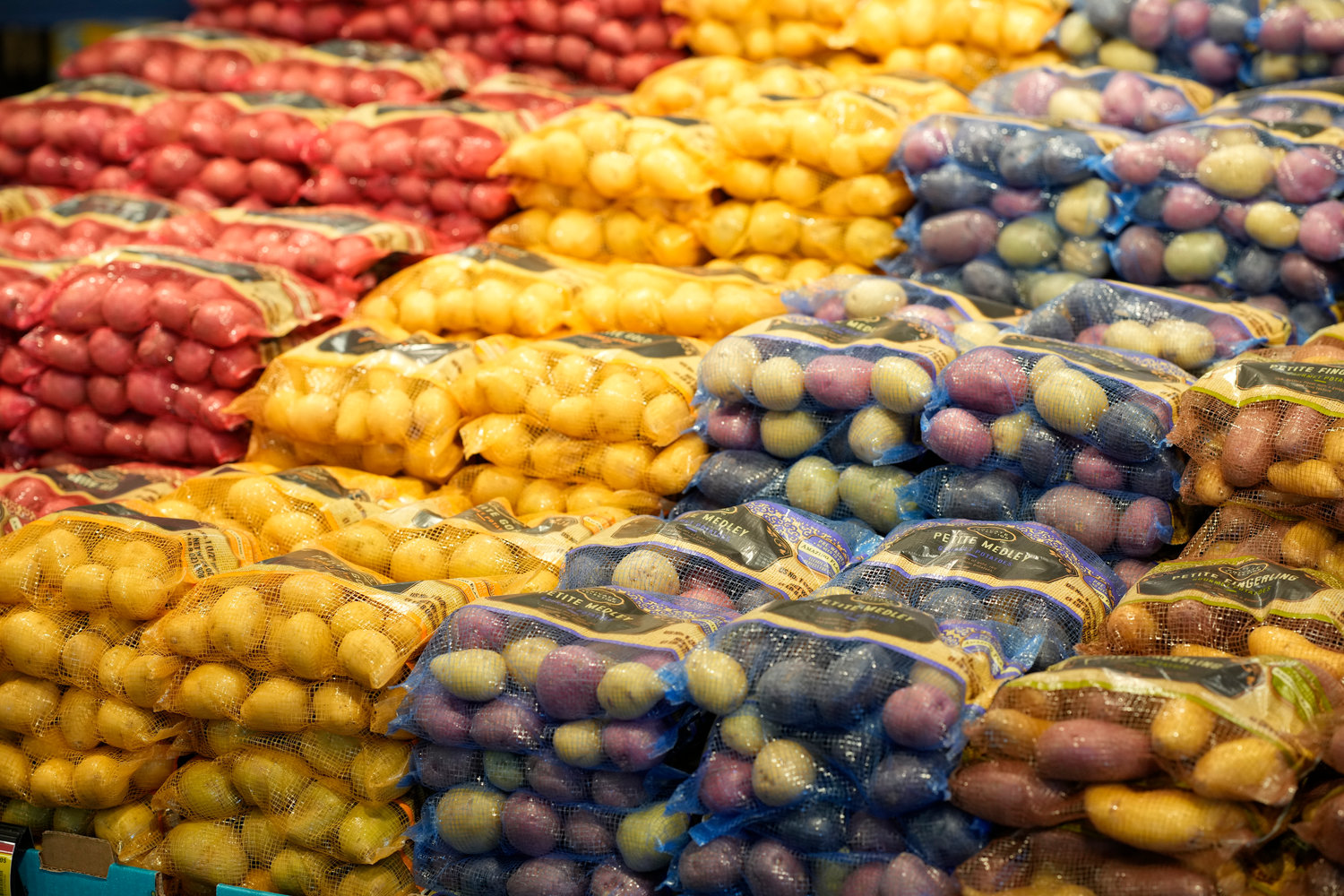 File - Bags of potatoes are displayed in a supermarket Tuesday, Feb. 8, 2022, in Boulder, Colo. Americans are bracing for a costly Thanksgiving this year, with double-digit percent increases in the price of turkey, potatoes, stuffing, canned pumpkin and other staples. (AP Photo/David Zalubowski, File)
AP
Previous Next
Posted Thursday, November 17, 2022 6:30 am
Dee-Ann Durbin, Associated Press

In early November, Hays Culbreth’s mother sent a poll to a few family members. She said she could only afford to make two sides for their group of 15 this Thanksgiving and asked them each to vote for their favorites.

Culbreth guesses green beans and macaroni and cheese will make the cut, but his favorite — sweet potato casserole with a brown sugar crust — will not. “Talk about Thanksgiving being ruined,” joked Culbreth, 27, a financial planner from Knoxville, Tennessee.

Americans are bracing for a costly Thanksgiving this year, with double-digit percent increases in the price of turkey, potatoes, stuffing, canned pumpkin and other staples. The U.S. government estimates food prices will be up 9.5% to 10.5% this year; historically, they’ve risen only 2% annually.

Lower production and higher costs for labor, transportation and items are part of the reason; disease, rough weather and the war in Ukraine are also contributors.

“This really isn’t a shortage thing. This is tighter supplies with some pretty good reasons for it,” said David Anderson, a professor and agricultural economist at Texas A&M.

Wholesale turkey prices are at record highs after a difficult year for U.S. flocks. A particularly deadly strain of avian flu — first reported in February on an Indiana turkey farm — has wiped out 49 million turkeys and other poultry in 46 states this year, according to the U.S. Centers for Disease Control.

As a result, U.S. turkey supplies per capita are at their lowest level since 1986, said Mark Jordan, the executive director of Jonesboro, Arkansas-based Leap Market Analytics. Jordan predicts the wholesale price of a frozen, 8-16 pound turkey hen — the type typically purchased for Thanksgiving — will hit $1.77 per pound in November, up 28% from the same month last year.

Still, there will be plenty of whole birds for Thanksgiving tables, Jordan said. Companies have been shifting a higher percentage of birds into the whole turkey market for the last few years to take advantage of the consistent holiday demand.

And not every producer was equally affected. Butterball — which supplies around one-third of Thanksgiving turkeys — said avian flu impacted only about 1% of its production because of security measures it put in place after the last big bout of flu in 2015.

But it could be harder for shoppers to find turkey breasts or other cuts, Jordan said. And higher ham prices are giving cooks fewer cheap alternatives, he said.

Avian flu also pushed egg prices into record territory, Anderson said. In the second week of November, a dozen Grade A eggs were selling for an average of $2.28, more than double the price from the prior year, according to the U.S. Department of Agriculture.

Egg prices would have been higher even without the flu, Anderson said, because of the rising cost of the corn and soybean meal used for chicken feed. Ukraine is normally a major exporter of corn, and the loss of that supply has caused global prices to soar.

Add that to rising prices for canned pumpkin — a 30-ounce can is up 17% from last year, according to market researcher Datasembly — and it’s clear Thanksgiving dessert will be

costlier too. Nestle-owned Libby — which produces 85% of the world’s canned pumpkin — said pumpkin harvests were in line with previous years, but it had to compensate for higher labor, transportation, fuel and energy costs.

Plan to fill up on sides? That will also cost you. A 16-ounce box of stuffing costs 14% more than last year, Datasemby said. And a 5-pound bag of Russet potatoes averaged $3.26 the second week of November, or 45.5% higher than a year ago.

Craig Carlson, the CEO of Chicago-based Carlson Produce Consulting, said frost and a wet spring severely stunted potato growth this year. Growers also raised prices to compensate for the higher cost of seeds, fertilizer, diesel fuel and machinery. Production costs are up as much as 35% for some growers this year, an increase they can’t always recoup, Carlson said.

Higher labor and food costs are also making it more expensive to order a prepared meal. Whole Foods is advertising a classic Thanksgiving feast for eight people for $179.99. That’s $40 more than the advertised price last year.

The good news? Not every item on holiday shopping lists is significantly more expensive. Cranberries had a good harvest and prices were up less than 5% between the end of September and the beginning of November, said Paul Mitchell, an agricultural economist and professor at the University of Wisconsin. Green beans cost just 2 cents more per pound in the second week of November, according to the USDA.

And many grocers are discounting turkeys and other holiday staples in the hope that shoppers will spend more freely on other items. Walmart is promising turkeys for less than $1 per pound and says ham, potatoes and stuffing will cost the same as they did last year. Kroger and Lidl have also cut prices, so shoppers can spend $5 or less per person on a meal for 10. Aldi is rolling back prices to 2019 levels.

But Hays Culbreth isn’t optimistic about his casserole. He’s not much of a chef, so he plans to pick up a couple of pumpkin pies at the grocery on the way to his family’s feast.