Rome Free Academy senior Emily Toth-Ratazzi has signed a National Letter of Intent to run cross country at Division I Syracuse University on a full athletic scholarship. “I really liked the team … 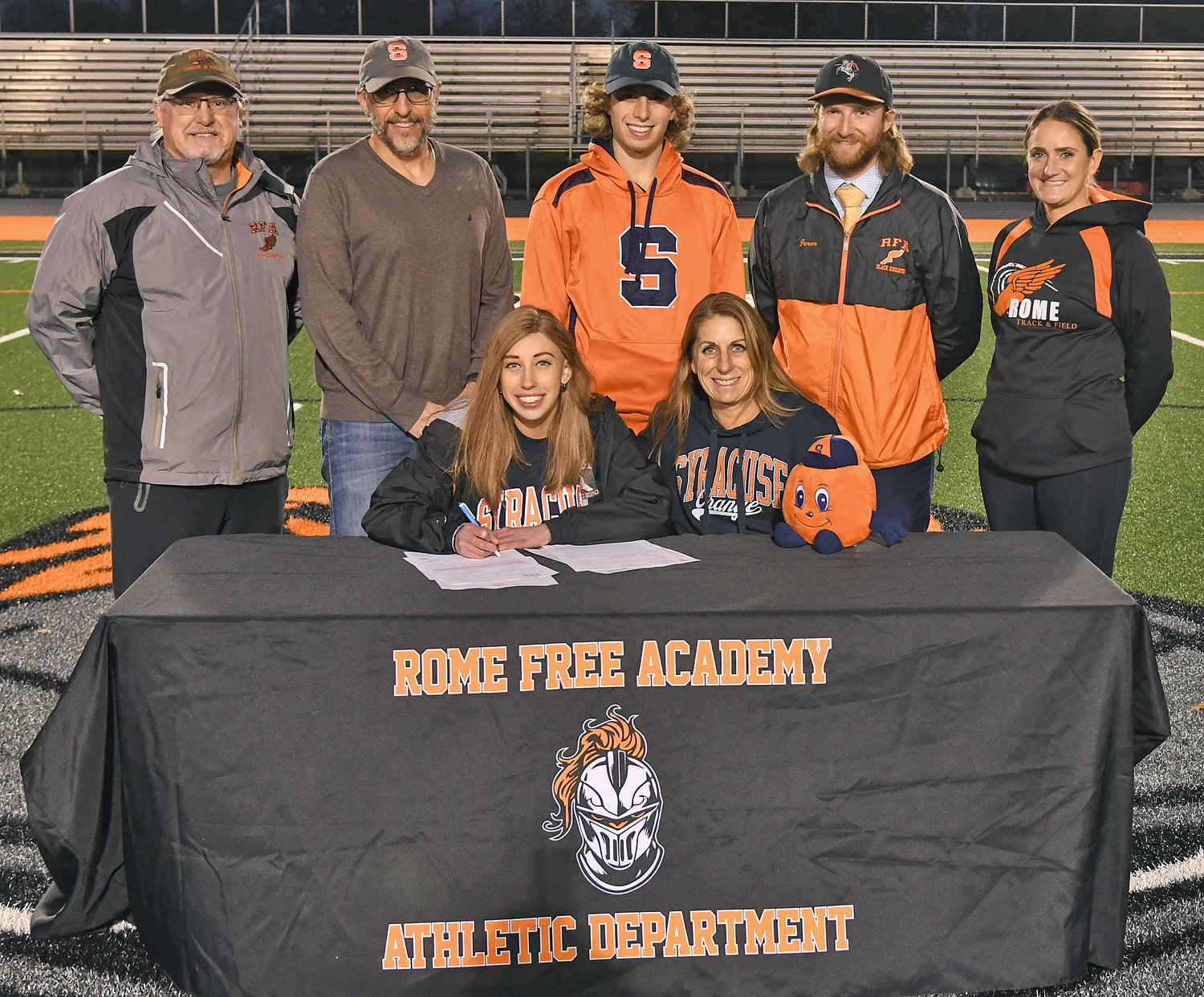 HEADED TO SYRACUSE — Emily Toth-Ratazzi signs her letter of intent to run cross country at Division I Syracuse University next year. The Rome Free Academy senior is joined by her mother, Shirley Toth. Standing with them are, from left: coach Brett Couchman, her father Paul Ratazzi, her brother Nicholas Toth-Ratazzi, coach Nick Jeror and coach Diane Benedict-Stevenson.
(Sentinel photo by John Clifford) 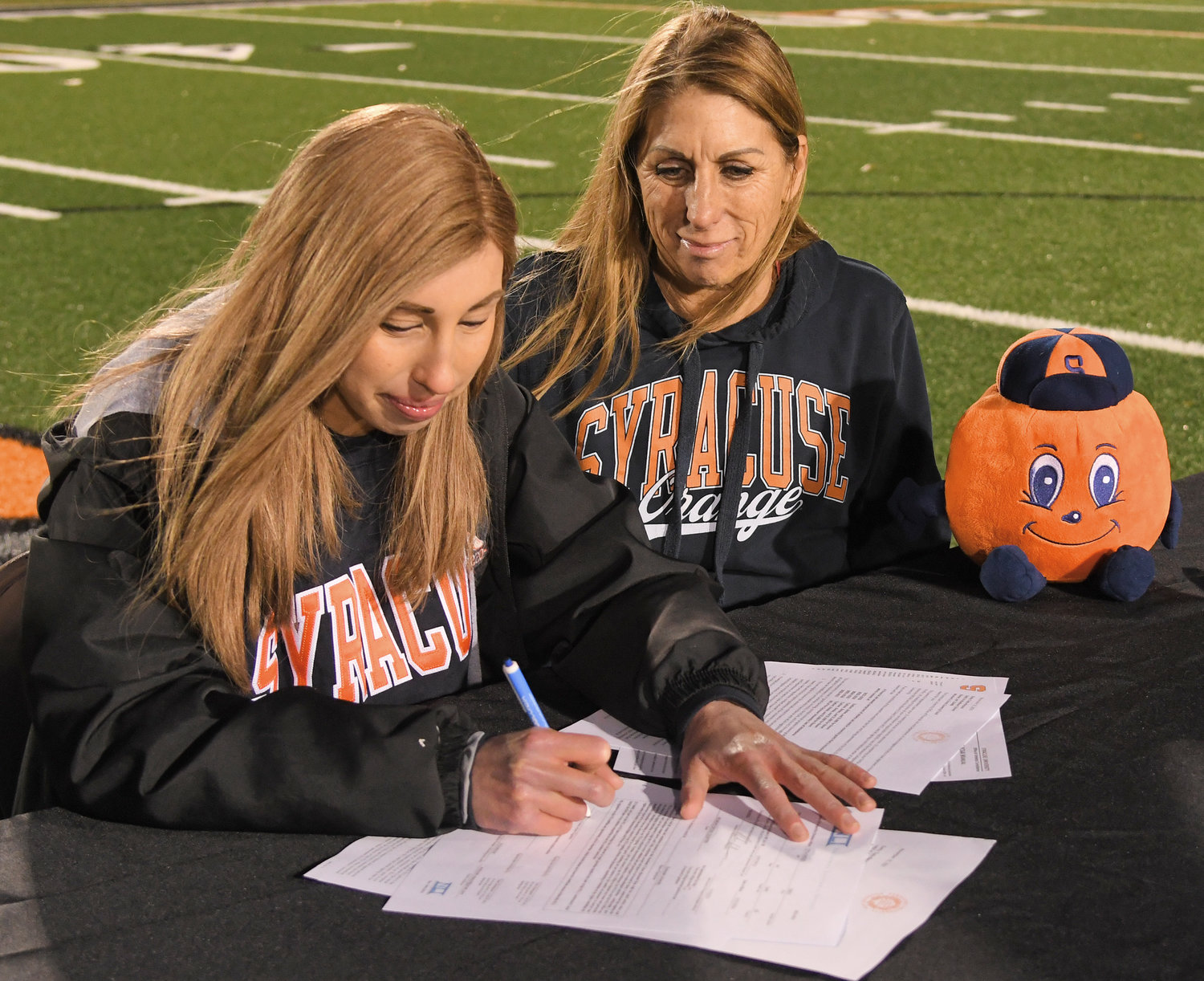 “I really liked the team and the culture,” said Toth-Ratazzi about Syracuse. The team has knowledgeable coaches who care a lot about the athletes, she added.

Syracuse also offers the major she wants to study, health and exercise science, so that she can pursue a career in physical therarpy.

When she visited the campus in August, she said, “I really liked it.” She visited a few other schools as well, but spending time with the Syracuse cross country team “showed me they’re a really caring, supportive team but had big goals.” She said it was a good fit for her.

Toth-Ratazzi has piled up the accolades as a Black Knight. In cross country, her best time in the 5K is 17:47. She is a three-time Tri-Valley League champion (2019-21) and four-time league all-star. She’s a four-time scholar-athlete as well. She was the Section III Class A runner-up this year and was sixth in 2019. She ran in the state meet twice, including an eighth place finish last weekend. She has run in two regional qualifiers, finishing 15th in 2020 and 24th in 2019. She won the 2021 EJ Herman race. She was the 2021 Section III Class A Sportsmanship Award winner, a four-time all-CNY runner and four-time All-Mohawk Valley Athlete.

In indoor track, she was all-league three times and team MVP the last two years. She was a 2020 All-Mohawk Valley selection, a sectional winner in ninth, 10th and 11th grades and scholar-athlete those three years. She was a national qualifier in the mile in ninth and 10th grade, though there were no nationals last year due to COVID-19. She was a captain of the team this past season and holds one RFA record and two TVL records.

She was also this year’s Rome Sports Hall of Fame Sports Personality of the Year.

“I like to stay a little bit behind then try to gain ground on my competitors,” Toth-Ratazzi said of her style in long distance competitions. Syracuse University coaches preach starting smart and moving up during the race, she noted.

She said she chose Syracuse in part because “I definitely wanted to go to a competitive school in Division I.” Both the Orange men’s and women’s teams earned automatic qualifying spots to this year’s NCAA Cross Country Championships. Her plan is to “help the team as much as I can.” To do so, she’ll have to develop her style and add goals to work toward, she said.

She noted that her coaches at RFA “were really supportive of whatever decision I made.” And while she said she knows there will be more pressure on her at the college level, “I know I have supportive coaches and my parents and my teammates.” She added: “Competitiveness is a good thing,” putting on the pressure but making it fun too.

Toth-Ratazzi said she’s looking forward to “enjoying the last of my senior year at RFA,” with goals of setting more personal records and improving the times of her relay teams. Throughout the seasons, she said, she’ll continue to trust her coaches and train hard.

Her finish at the state meet qualified her for the New York State Federation Cross Country Championship Saturday in Wappingers Falls.

She will, however, defer to run in the Foot Locker Northeast Regionals Meet Nov. 27 in the Bronx. With a good finish there, she can qualify for nationals. “I think I have a pretty solid chance,” she said.