Over a year after verbally committing, Rome Free Academy senior guard Amya McLeod put pen to paper Thursday to officially announce she will play Division I college basketball at Youngstown State in Ohio. 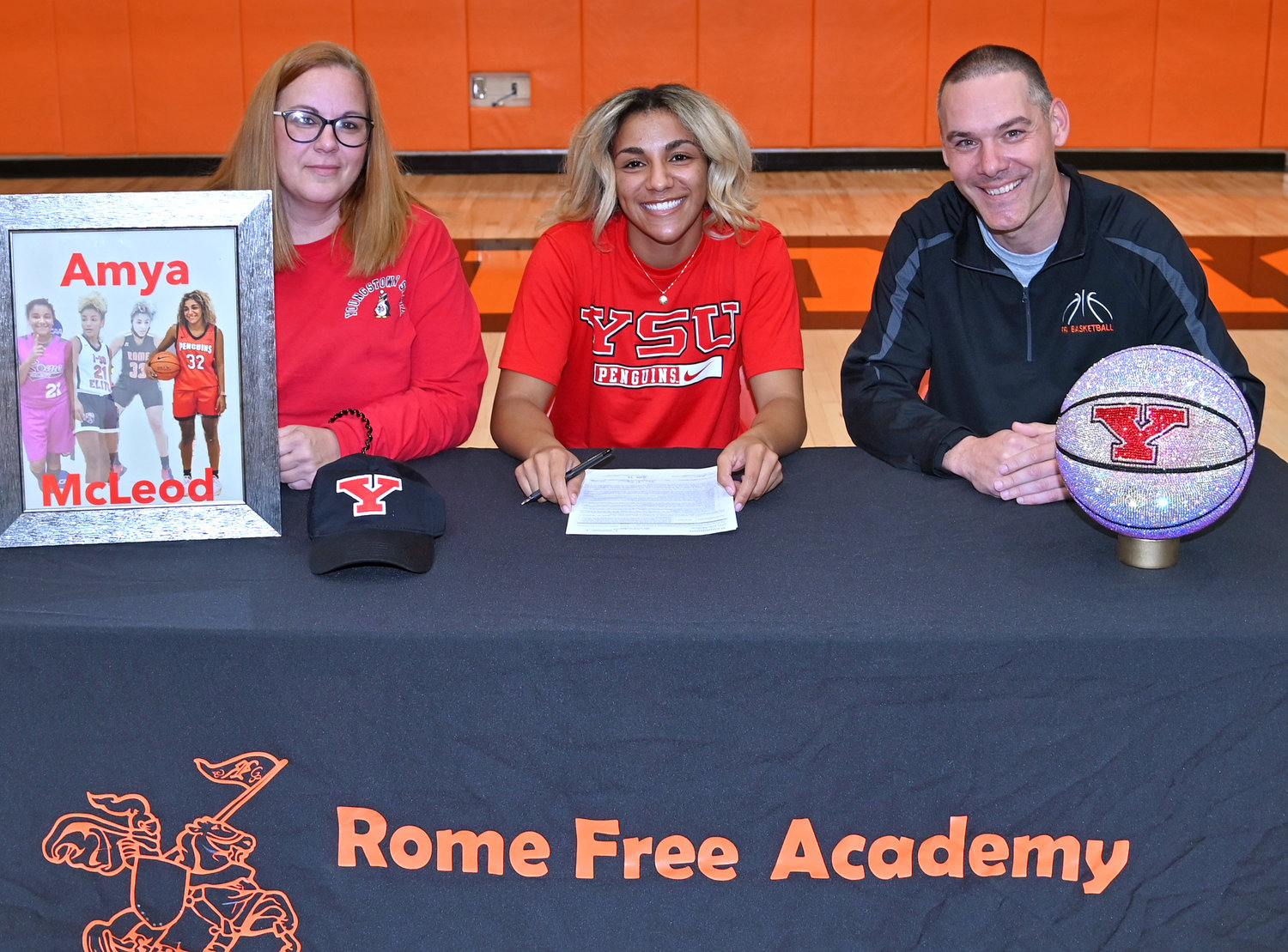 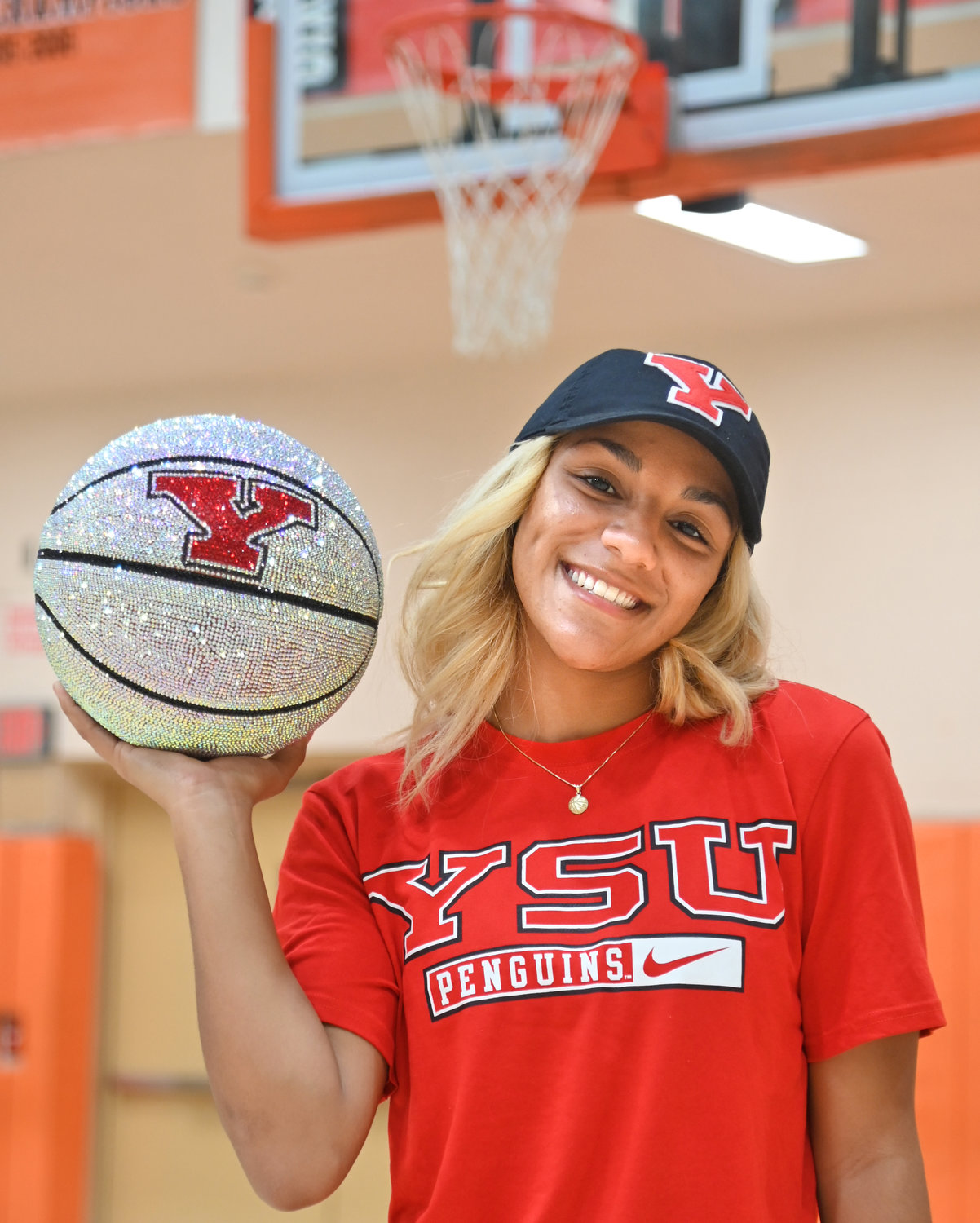 Amya McLeod poses at the Rome Free Academy basketball court after signing her National Letter of Intent Thursday to play Division I college basketball at Youngstown State in Ohio. The senior is closing in on second in all-time scoring for the Black Knights and is among the leaders in virtually every offensive and defensive career statistic in program history.
(Sentinel photo by John Clifford)
Previous Next
Posted Thursday, November 10, 2022 6:00 pm
Steve Jones
Sports writer
email / twitter

Last fall the 5-foot-6 standout for the Black Knights first noted her intentions to play for the Penguins. Since then she's only grown more sure that this is the path for her. She made her official visit Sept. 7. "It definitely made me feel a lot better to hang out with the team and spend time with them overnight." It is, she said, "definitely a family-oriented place." She said she got plenty of messages from her future teammates Thursday on the day she signed her National Letter of Intent surrounded by family, coaches and RFA teammates.

McLeod was also attracted to the school's physical therapy program.

Even through McLeod's name is all over the RFA program's all-time leaders in various categories, she said she knows she has plenty to do this season to prepare for the next level. She said she has to earn her time in college. "Work harder and show I deserve to get playing time."

McLeod is chasing Nikki Jo Rotolo in most all-time RFA statistically categories, the most high-profile being scoring. Rotolo put up 2,030 points as a Black Knight en route to playing at St. John’s University and New York Institute of Technology. McLeod has 1,235, but lost about 15 games to the drastically shortened 2020-21 season due to COVID-19 regulations. She's third behind Lori Keys (1,334 points).

"It's still up there," she said of the goal to one day be the program's leading scorer. To pass Rotolo would take a pace of about 40 points a game for what is typically about 20 games per season. She has plenty of other goals this coming season though. "Section title. To know we were so close last year," she said. The team was 15-7 last season with a 62-57 loss to Baldwinsville in the Class AA semifinals.

As she looks to refine her game for college basketball, she said she'll work on her shooting most of all. "My defense is already there," so she wants to improve on "seeing the floor more." She added, "Obviously I'll score my points, but my teammates … I want them to get their points too."

McLeod is third in program history in three-pointers with 87, trailing Rotolo's record 136. She's fifth in assists with 230. Rotolo leads there too with 485. She's 13th in rebounds with 429. Keys has the program record of 1,008. She also has nine double-doubles. Defensively, she is third in deflections with 182, trailing only her former teammate Jace Hunzinger, who has 204. She also has 171 steals, which ranks her fifth, with Rotolo's 333 as program-best.