Plus: Tennis, lacrosse, softball and more... 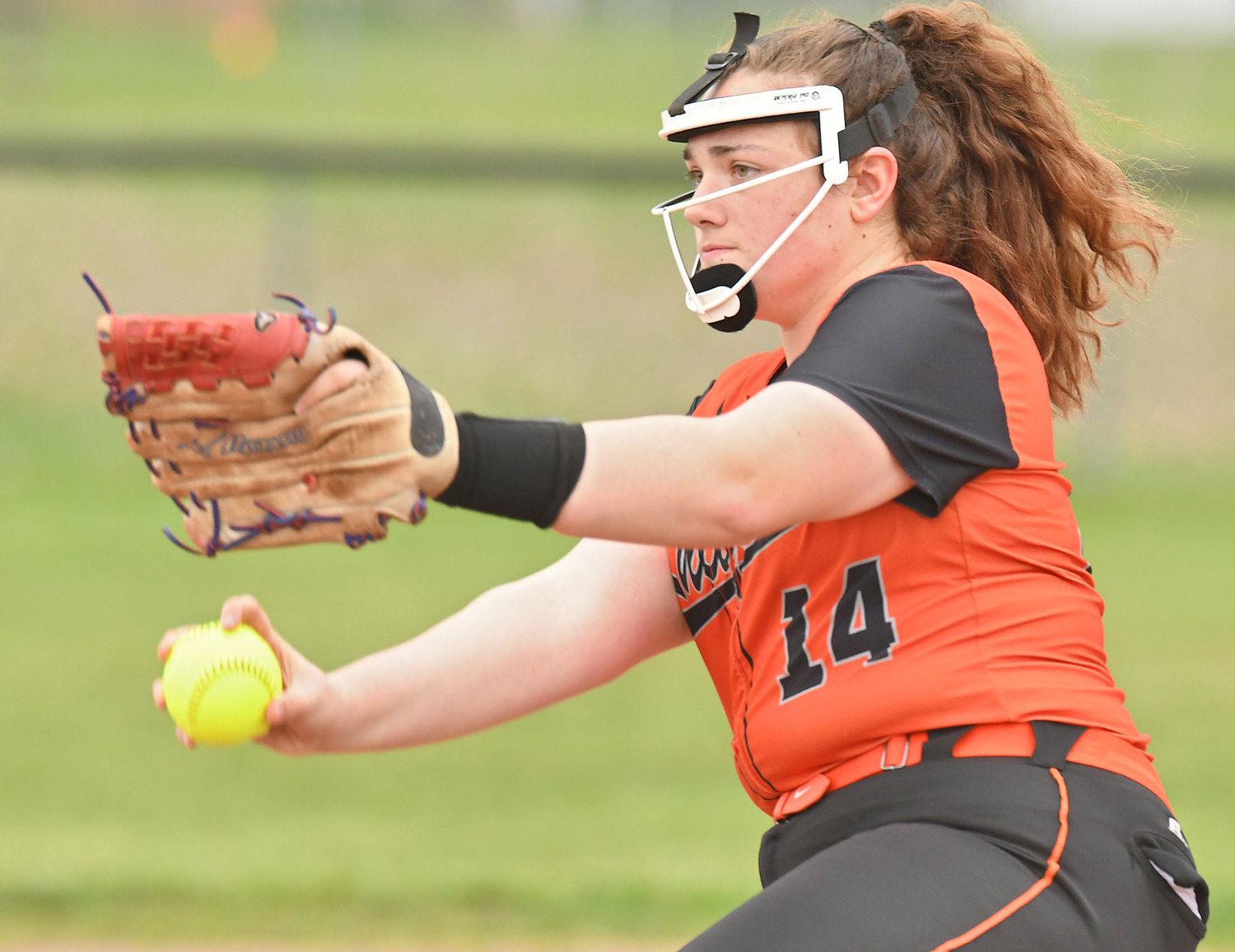 TWO-WIN DAY — Rome Free Academy junior Shea Larkin delivers against Utica Proctor at home at Kost Field. Larkin pitched all 10 innings of the two five-inning games Tuesday against the Raiders to earn a pair of wins. She held the Raiders hitless for the first 4 1/3 innings of the first game. She struck out 16 between the two games.
(Sentinel photo by John Clifford) 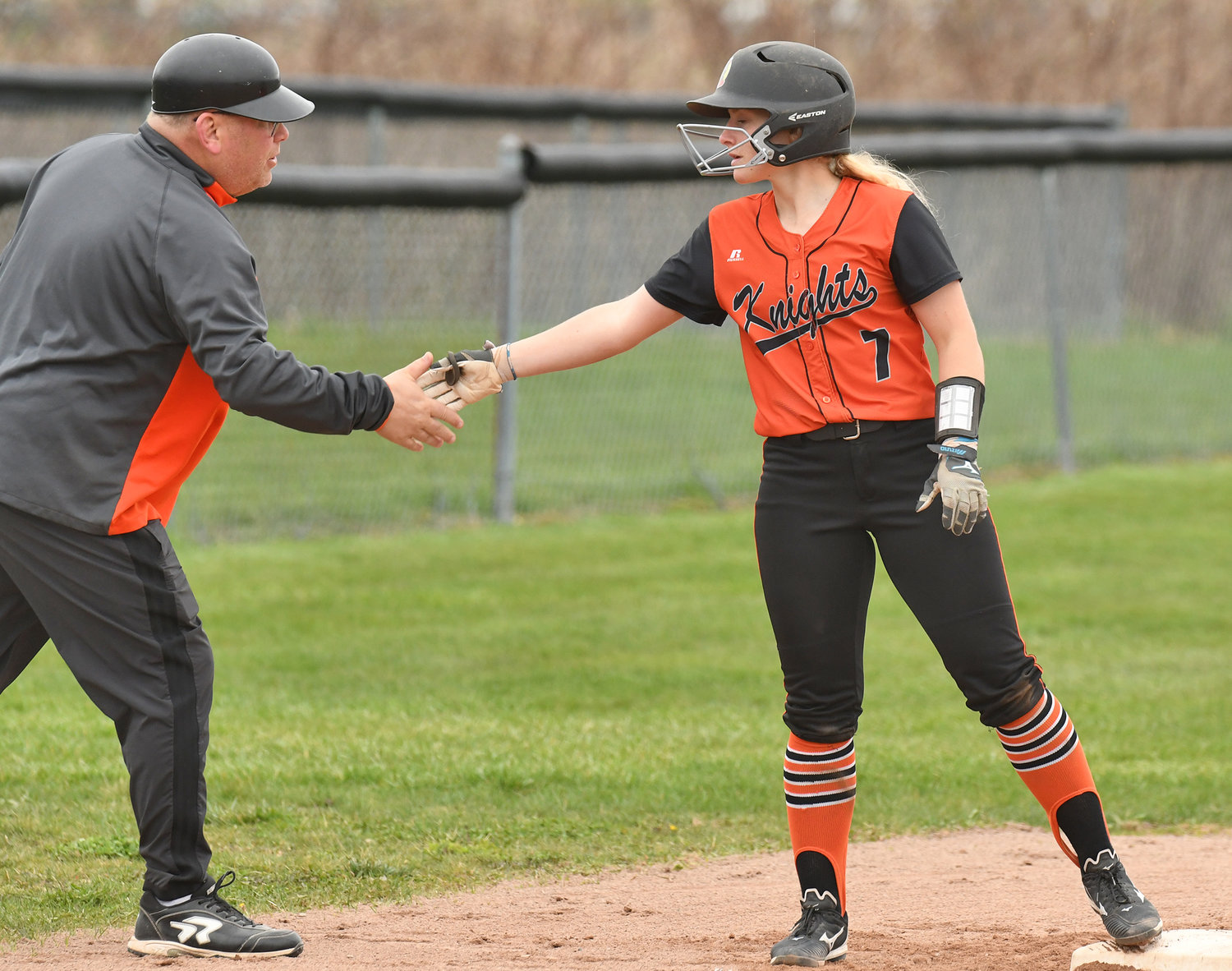 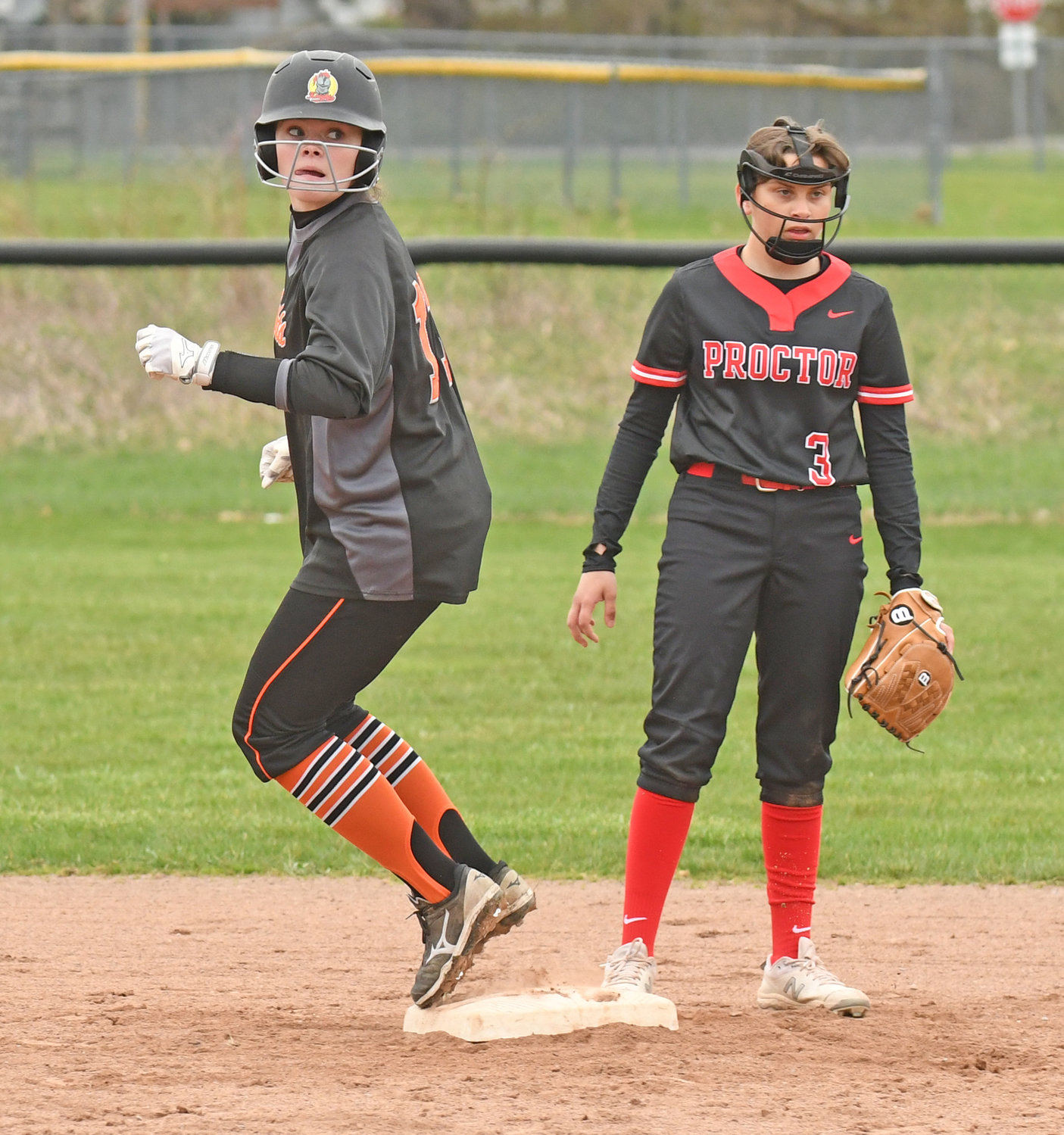 KNIGHTS SWEEP — Rome Free Academy baserunner Kelly O'Neil looks back to see the ball land in right field Tuesday against Utica Proctor at Kost Field in the first game of a doubleheader. Awaiting the throw in is Proctor shortstop Bianca Marino. RFA won both Tri-Valley League games, 5-0 and then 10-3.
(Sentinel photo by John Clifford) 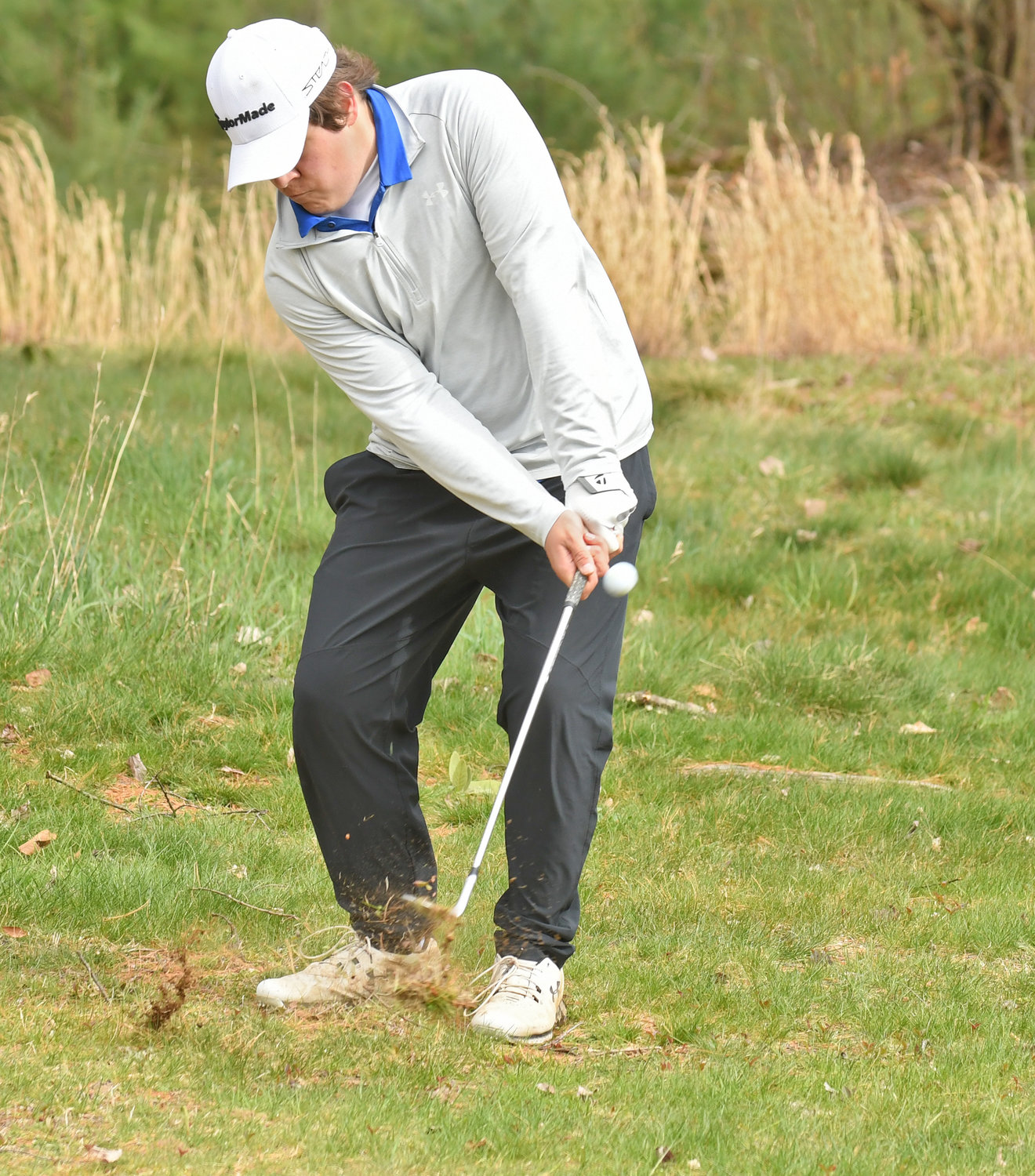 GOING FOR THE GREEN — Whitesboro’s Chris Stilwell chips to the 11th green in the Warriors’ match against Rome Free Academy at Rome Country Club Wednesday. Stillwell shot a 42, one stroke behind Mike Stilwell’s 41. The Warriors won 229 to 280.
(Sentinel photo by John Clifford) 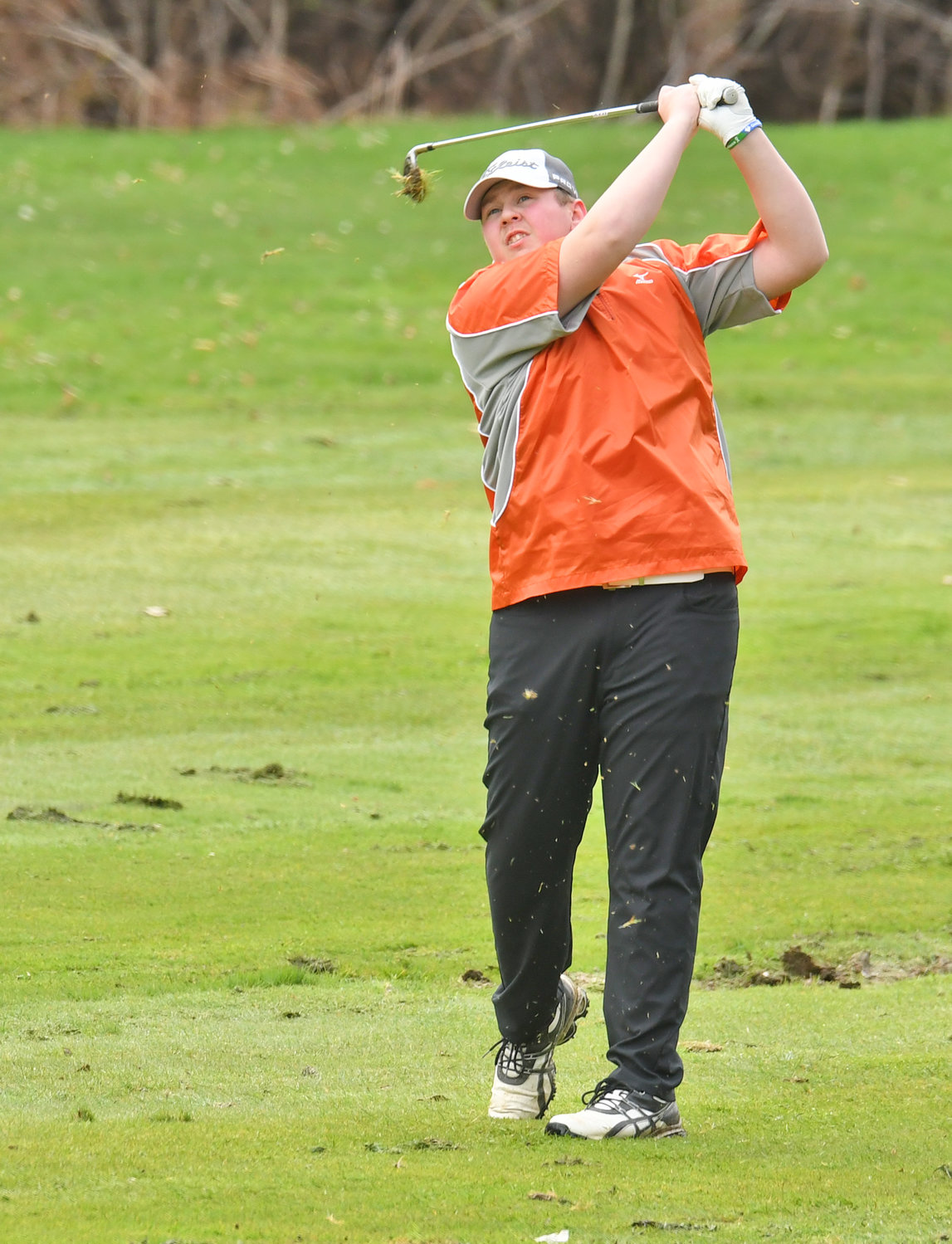 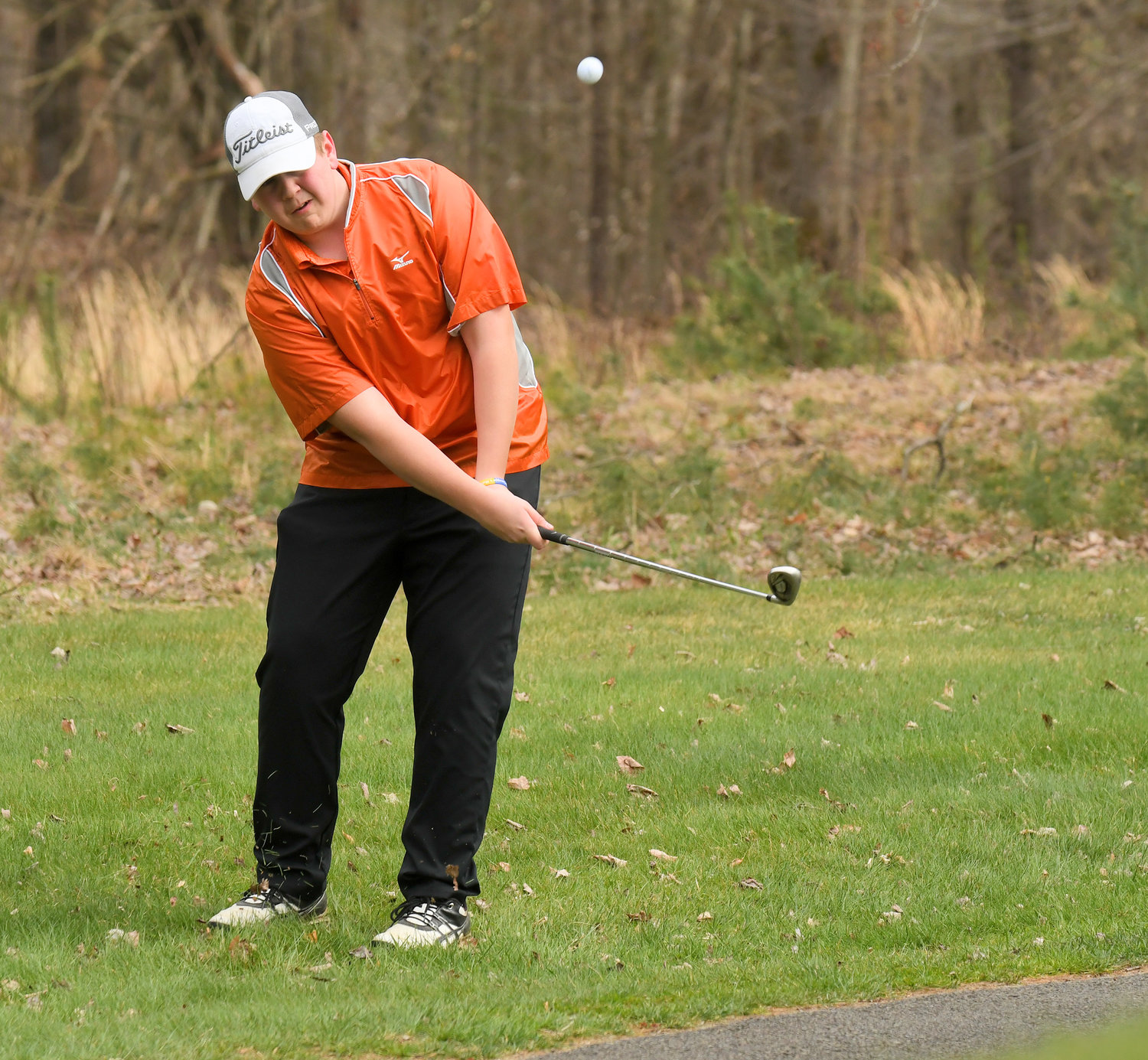 The Rome Free Academy softball team bounced back from Monday’s 12-inning loss with a sweep of Tuesday doubleheader at home against Utica Proctor, 5-0 and 10-3, in Tri-Valley League play.

“Huge,” said RFA head coach Jerry Closinski after the pair of wins at Kost Field. “We’re 3-1 in the league.” He was without starting pitcher Laina Beer the day after she pitched all 12 innings of the team’s 8-7 loss against New Hartford, as she rested her arm and was held to a pair of at-bats in the second game Tuesday. “Laina pitched great last night. Shea (Larkin) pitched great tonight.”

Instead of the senior Beer in the circle, the Black Knights went to the junior Larkin. She seized the opportunity and threw all 10 innings of the two five-inning games Tuesday to earn a pair of wins. She even held the Raiders hitless for the first 4 1/3 innings of the first game.

In the end, Larkin allowed three runs on four hits and four walks. She struck out 16 between the two games.

In the batter’s box, it was a pair of seniors who led the way for RFA, leadoff hitter Lauren Dorfman and Maggie Closinski in the three spot. Dorfman was 4-for-6 with a double, triple and walk, four runs scored and a run batter in. Closinski was 6-for-7 with a pair of triples, three runs and two RBIs.

“Yesterday was a really tough loss,” said Closinski, the team’s shortstop and a co-captain, after Tuesday’s wins. The team was exhausted but, “we really just had to look past that and regroup and get another TVL win in our pockets.”

The RFA offense has been all over the place in the team’s 4-5 start. The team has put up eight or more runs three times but has also been held to four or fewer runs in four games. The coach said the team has too many players slumping and needs more from the middle and bottom part of the lineup. “We have to do a little more with the bat,” including creating more big innings. “We’ll get it. Total confidence we can put up four- to five-run innings.”

“It definitely took us a while to get the bats going and me especially about three games,” said Maggie Closinski. But now she and the other Knights are “back in the groove.” Still, “Everybody needs to contribute and at least get a hit,” as the team has had too many strikeouts that have killed potential rallies.”

“We should be able to get over the hump,” the coach said. “I think we’re on the right path.”

In the first game Tuesday, RFA scored once in the first on back-to-back two-out singles by Closinski and Adrianna Varano. The Knights got three more in the second. Kelly O’Neil led off with a single then Kate Platis doubled. Kenidee Campbell had an RBI groundout then Platis scored on a throwing error. Campbell came around to score on an RBI double by Dorfman. In the fourth, Juliana Huckabone drove in Dorfman with a single after she’d singled and stolen second base.

Game two had each team score a pair of first inning runs, but RFA’s offense kept on coming while the Raiders couldn’t keep up.

But RFA took a 4-2 lead in the top of the second and never trailed. Platis singled to lead off the inning and Dorfman walked with two outs, and both would later score. The Knights built on the lead with two more in the third. Closinski tripled and scored on a single by Varano. She scored on an RBI groundout by Morgan Bruno.

RFA piled on with a four-run fourth inning. Campbell led off with a single and stole second. Mary Barrett got on via an error and Dorfman singled in Campbell. Barrett came home on a wild pitch and then Closinski and Varano had back-to-back RBI singles to score Dorfman and Huckabone, who had walked.

Proctor got a run back in the bottom of the fifth but it was not nearly enough. Welpe walked and scored on a double by Simmons.

Simmons went the distance in game one in the circle for Proctor, allowing nine hits and striking out four. She threw the first four innings of game two, allowing the 10 runs on 10 hits and three walks with two strikeouts. Mazza threw the last inning, allowing a hit and walking two.

Proctor will host Central Valley Academy at 4:30 p.m. Thursday in the league.

Prievo allowed only the one baserunner and she struck out three.

The Devils scored four in the first and three in the second before adding a nine-run fourth.

Camden is now 7-0 and will travel to Chittenango at 5 p.m. Monday in non-league play.

The Oneida softball team scored five runs in the top of the seventh to pad its lead and win 8-1 at Vernon-Verona-Sherrill in the TVL Tuesday.

Kerrigan Crysler went the distance in the circle for Oneida. She allowed one earned run on five hits and a walk while striking out nine.

On the other side, Kendal Lehnen struck out 14 for VVS in the loss. She allowed eight runs, seven of them earned, on seven hits and five walks.

Kaylin Curro doubled twice and scored three times for Oneida. Olivia Friend has a single and double with a run and an RBI. Julianna Caroli had a hit and three RBIs.

For VVS, Grace Maranville led the team with a pair of hits. With the bat, Lehnen doubled and drove in a run.

The New Hartford softball offense was clicking Tuesday, with at least a run in six of seven innings in a 12-4 road win against Utica Notre Dame in the TVL.

Sienna Holmes went the distance for New Hartford, allowing four runs, three of them earned, on four hits and seven walks. She struck out four.

The offense gave her a big cushion. The Spartans led 7-0 before the Jugglers scored three in the fifth but New Hartford immediately answered back with three more runs.

Maggie Trinkaus had two hits and a run for Notre Dame.

Ella Trinkaus had a double and two RBIs. She took the loss in the circle, allowing 12 runs, eight of them earned, in seven innings on 18 hits and three walks. She struck out three.

Notre Dame hosts Camden in the TVL at 5 p.m. Thursday.

Ilana McCarthy and Sophia Campola each netted a hat trick and an assist for New Hartford girls lacrosse in an 11-8 win at Whitesboro Tuesday in the TVL.

The Spartans outscored the Warriors 7-3 in the first half.

Sophia DeRollo scored two goals for the Spartans. Bella Kolb and Ella Greico each had a goal and an assist. Grace McNamara also scored and Leah Hilton had an assist.

In net for New Hartford, Emily Picolla had two saves.

Whitesboro’s Maria Stuhlman had a hat trick and an assist. Gianna Parise scored twice. The Warriors also got a goal each from Jill Davis, Brinley Ronan and Kaelyn Barry.

In net, Becky Thomas made eight saves for Whitesboro.

New Hartford improves to 4-2 overall and 1-0 in the league. The team will play on the road against Vernon-Verona-Sherrill in the TVL at 7:30 p.m. Thursday.

Holland Patent eked out an 18-17 win on the road against Rome Free Academy Monday in boys lacrosse. John Zylinsky had a 13-point outburst, netting six goals and collecting seven assists for the Golden Knights.

Ryan Mierek scored four times and had two assists for HP. Cole Racquet had a hat trick with an assist. Kyle Erway scored two and had an assist and Adam Stowell also scored twice.

In net for HP, Melby Sann made 11 saves.

Statistics for RFA were not submitted.

RFA won 19-1 over Utica Proctor in the TVL. Game details were not available. The Black Knights visit Whitesboro at 5 p.m. Thursday in the league.

Gabriel Cull made two saves in net for the Spartans and Walker Williams had three.

Connor Wiggins had four goals and an assist for the Warriors. Marco Colicci and Spencer Cater also scored once each.

In net, Whitesboro’s Dominic Roach had 11 saves and Anthony Badolate had one.

Whitesboro hosts RFA in the TVL at 5 p.m. Thursday.

Winning singles matches for the Red Devils in one match were Tristan Wood, Cole Maguire and Lincoln Pelc. Maguire won again in the second match and VVS took forfeits in the other two singles matches.

VVS took forfeit wins in both doubles matches in the first match. In the second, Jack Mitchell and Isac Rebres won and the team took a forfeit in the other match.