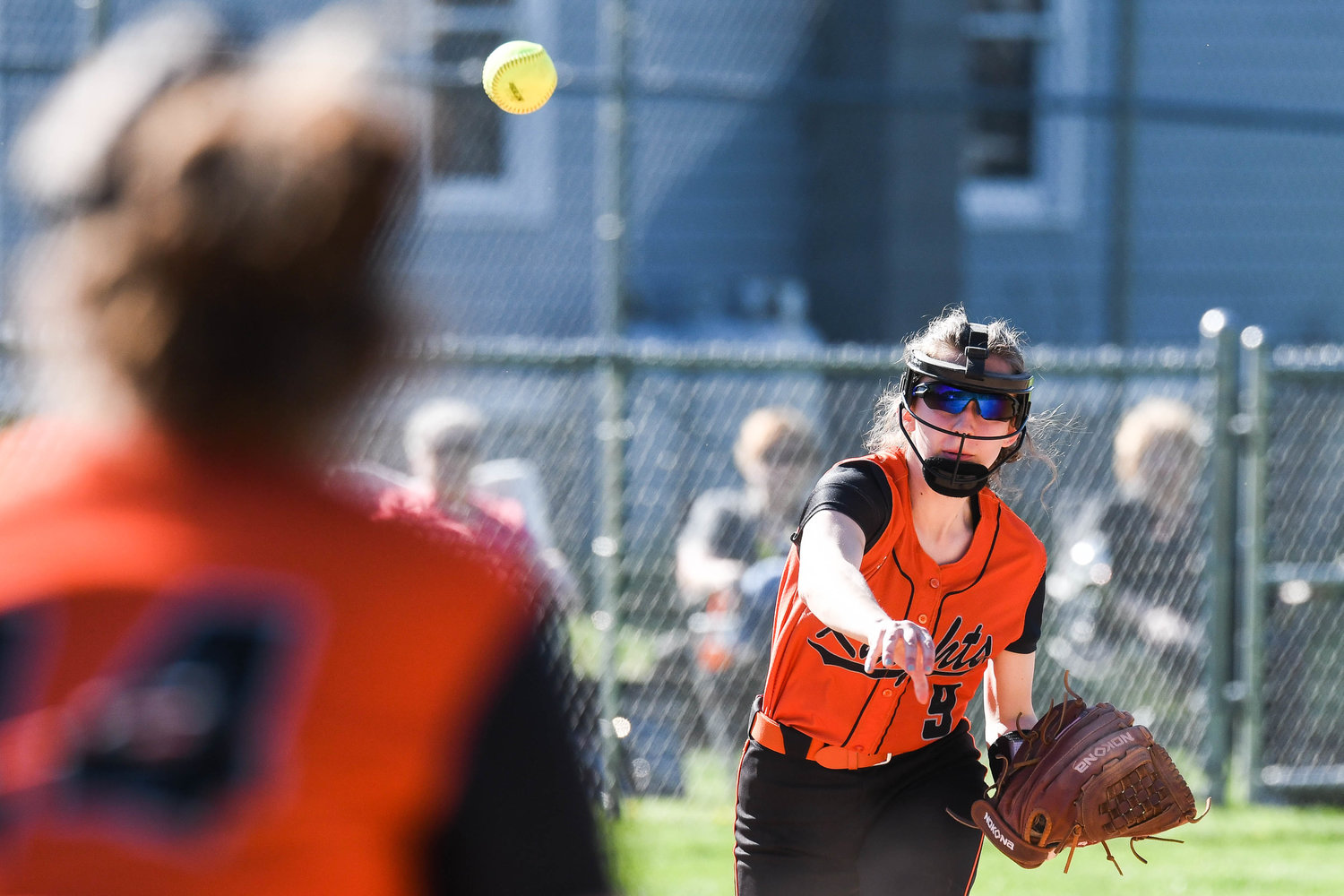 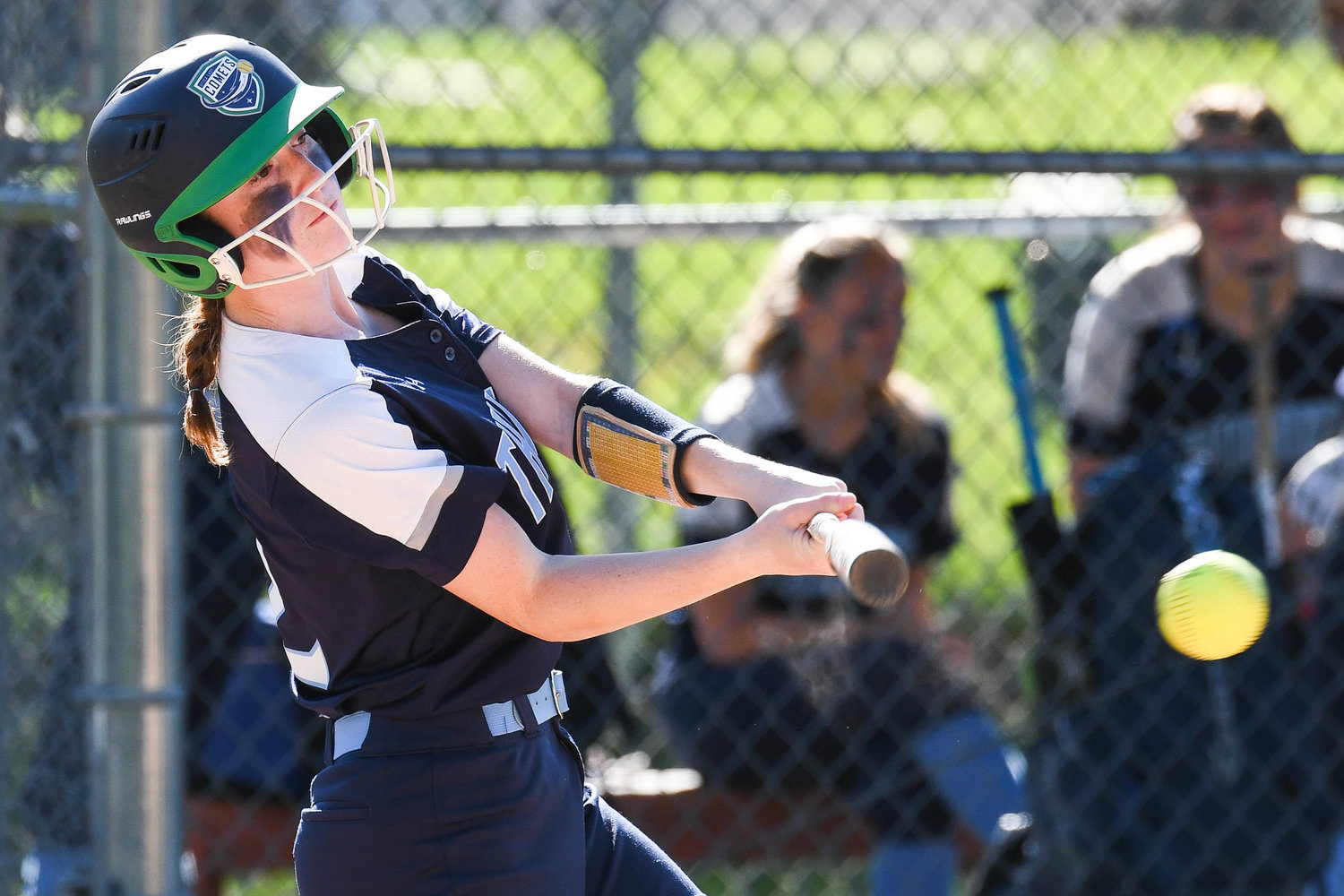 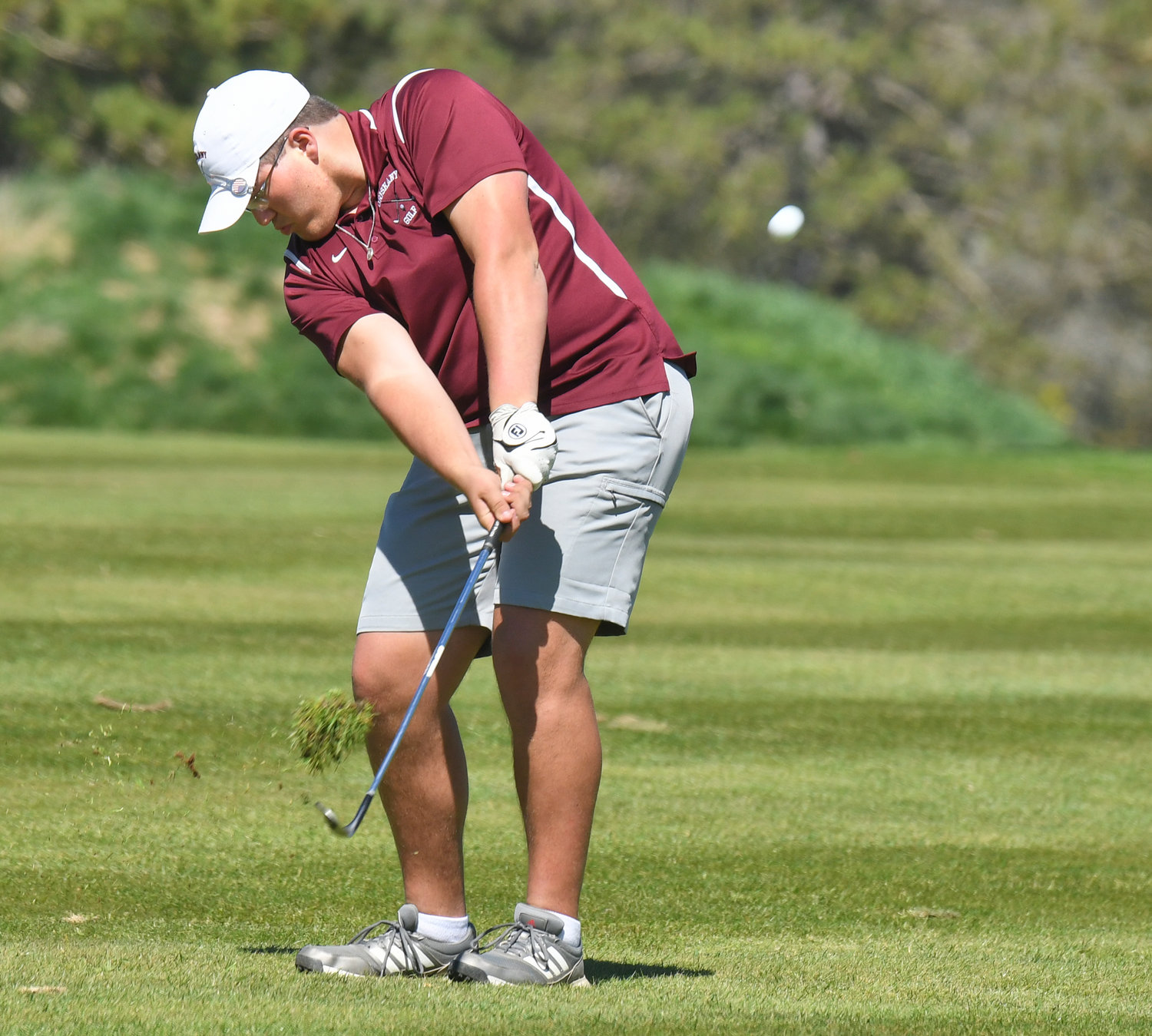 Oriskany’s Patrick Maher hits an approach shot to the 10th green during their match with Holland Patent on Wednesday afternoon at Crestwood Golf Club. Maher led the way for Oriskany with a team-best 42.
(Sentinel photo by John Clifford) 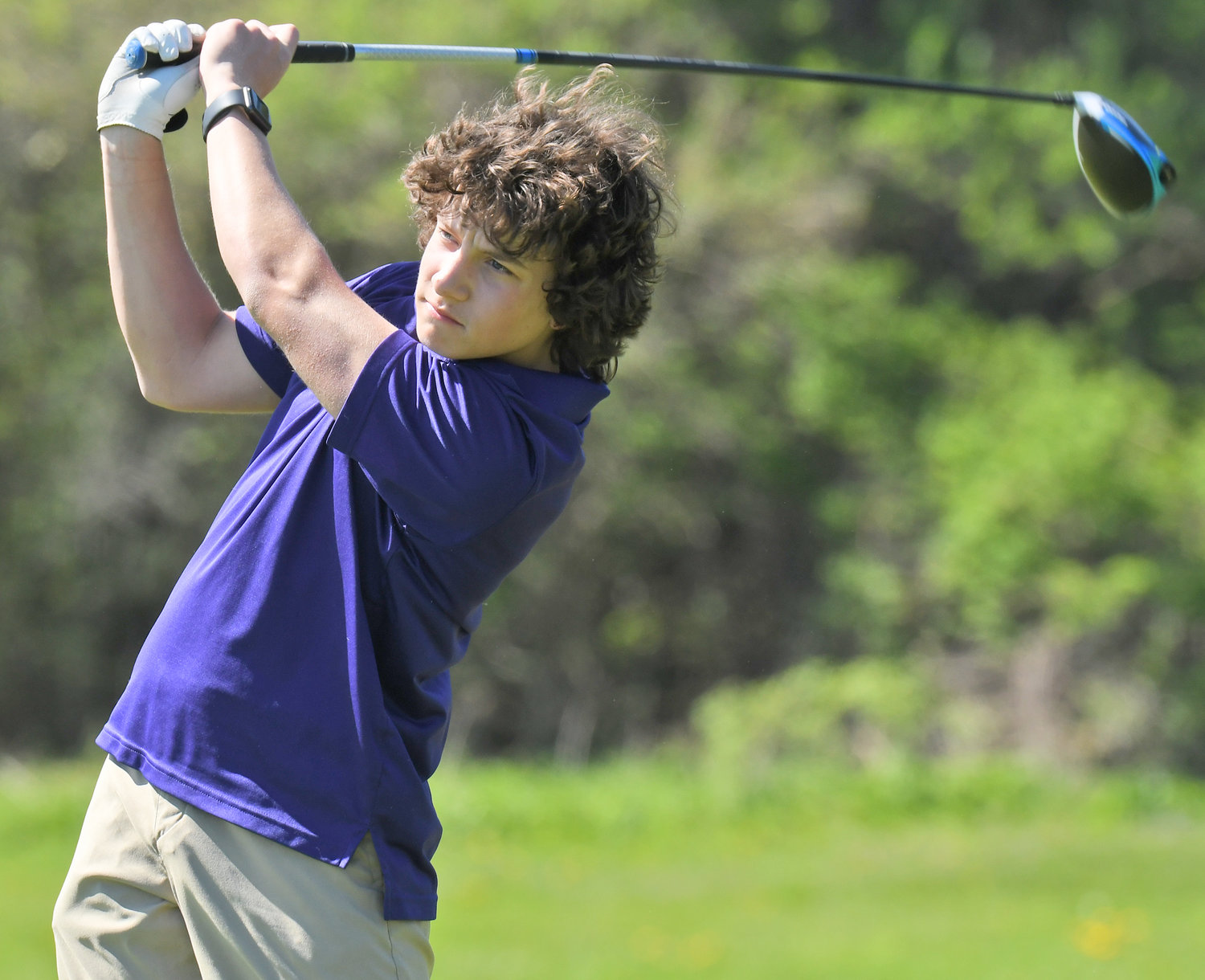 Holland Patent’s Jacob Olearczyk watches his drive on the 11th hole at Crestwood Golf Club on Wednesday afternoon during a match against host Oriskany. Olearczyk shot a 36, par for the course to earn medalist honors for HP.
(Sentinel photo by John Clifford)
Previous Next
Posted Wednesday, May 11, 2022 8:28 pm

The Black Knights struck for five third inning runs then broke the game open with four in the fifth.

In the circle, RFA’s Laina Beer went the distance, allowing three hits and a walk while striking out 11.

Lauren Dorfman had three hits including a double, scoring twice for the Black Knights. Alexa Thompson had two hits, two RBIs and a run scored. Caitlyn Platis had two hits, a run and an RBI. Maggie Closinski had a hit, two runs and two RBIs.

Kaylee Beam took the loss. She went the distance, allowing nine earned runs on eight hits. She struck out six.

Madison Obreza and Morgan Russo each doubled for CVA.

RFA travels to Fayetteville-Manlius for a 5 p.m. non-league game Friday.

The Camden softball team held off a late charge by host New Hartford Tuesday to get a 13-10 win in the TVL.

The Blue Devils led 9-0 after three innings and were up 13-2 in the middle of the sixth. The Spartans scored six in the sixth to make it 13-8 then got two more in the bottom of the seventh. But it wasn’t quite enough.

Brooke Musch had a single and double for Camden, scoring twice and driving in three runs. Cameron Shenk was 3-for-5 with two RBIs. Katie McCarthy was 3-for-4 with three runs and an RBI.

Savannah Cole had three hits, a run and two RBIs for New Hartford. Sienna Holmes singled, doubled, scored a run and drove in one. Sophia Burynski had two hits and scored.

Holmes took the loss. She went the distance allowing 13 runs, 11 earned, on 15 hits and three walks. She struck out seven.

The Westmoreland softball team defeated Dolgeville 20-7 Tuesday on the road in the Center State Conference.

Both Payton Kingwater and Samantha Ferguson had five RBIs and scored three runs. Ferguson had a double, triple and home run. Kingwater had two doubles.

Jenna Tyczynski was the winning pitcher. Ava Costanza took the loss in the circle.

Westmoreland was at Waterville in the league Wednesday. Results were not available at press time.

The Clinton softball team scored three runs in the top of the first inning Tuesday against host Sauquoit Valley but never scored again and dropped the non-league game 4-3.

Ella Luczak got the win, allowing three unearned runs on 10 hits and a walk. She struck out three.

Offensively for Sauquoit, Sydney Nattress had a hit and drove in two runs.

Chloe White threw a complete game for the Warriors, allowing four runs, three of them earned, on seven hits. She struck out four.

The Warriors hosted Adirondack in the league Wednesday. Game details were unavailable at press time.

Melby Sann made 12 saves in net for HP.

Statistics for RFA were not submitted.

HP hosts Chittenango at 5 p.m. on Thursday in non-league play.

RFA hosts Utica Proctor at 5 p.m. Friday in the league.

Goalie stats were not submitted.

Proctor visits RFA for a league game at 5 p.m. Friday.

NH girls lax gets past IHC

Ella Greico had a hat trick to power the New Hartford girls lacrosse team to a 10-7 win at Immaculate Heart Central of Watertown Tuesday.

Emily Picolla made seven saves in net for the Spartans to get the win.

Statistics for IHC were not submitted.

New Hartford improves to 7-5 overall and is 3-2 in the TVL. The Spartans host Whitesboro in the league at 4:30 p.m. Thursday.

Danielle D’Aiuto had a hat trick and added two assists for the Black Knights. Alyssa Nardslico scored twice and had an assist. Also scoring twice was Drew Kopek. Fiona McMahon and Isabella Sanzone scored a goal each. RFA led 8-3 at the half.

Alana Iacovissi made three saves in net for RFA.

For Clinton, Ava Alteri had a hat trick and an assist. Abigail Hemstrought scored twice. Dakota Deveans and Chelsea Lopata had a goal and assist each. Taylor Maxam and Claire Barone each had an assist.

RFA played at Vernon-Verona-Sherrill in the league Wednesday. Game details were unavailable at press time.

Clinton is at VVS at 6 p.m. Thursday.

The Warriors led 9-2 after the first half.

Danielle Lachacz had a hat trick and added an assist. Brinley Ronan and Maria Stuhlman each had two goals. Abigail Dick had a goal and an assist. Hannah Shulsky, Jillian Davis and Kathleen Gaffney each scored once. Lauren Sfeir added an assist.

Becky Thomas made seven saves in net for Whitesboro.

Whitesboro improves to 5-7 and 2-4 in the league. The team plays a league game at New Hartford at 4:30 p.m. on Thursday.

VVS, 0-10 and 0-5, hosted RFA in the league Wednesday. Results were not available at press time.

The Oneida boys tennis team won all five matches in a win at home against TVL opponent Camden Tuesday.

Ryan Lusher and Ethan Schmidt won a doubles match and Oneida won the other by forfeit.

The Camden boys tennis team bounced back from a loss Tuesday with a pair of wins against Central Valley Academy Wednesday, 3-1 and 4-0.

Camden’s Zach Giarrusso, Koen Turner and Thomas Potter each won a singles match. The Blue Devils also took a pair of forfeits in singles and two more in doubles.

The Holland Patent boys tennis team improved to 11-1 on the season with a 5-0 win at Marcellus in a non-league match Tuesday.

HP hosted Sauquoit Valley in the league Wednesday. Results were not available at press time.

VVS shuts out CVA at the net

The Vernon-Verona-Sherrill boys tennis team shut out host Central Valley Academy 5-0 and 5-0 in a pair of TVL matches Tuesday.

Wood, Rebres and Cole Maguire won singles in the other match. VVS took forfeit wins in both doubles matches.

VVS is now 7-4 overall and 3-1 in the league. The Devils were at RFA Wednesday. Results were not available at press time.

The Oriskany boys golf team won 176 to 201 over visiting Holland Patent at home at Crestwood Golf Club Wednesday in the Center State.

Patrick Maher led the way for Oriskany with a team-best 42.

HP medalist Jake Olearczyk shot a 36, par for the course.

HP, 4-3, will get a rematch against Oriskany at 3:30 p.m. Monday when the Golden Knights host a match at Camroden Golf Course.

Oneida played against VVS and Camden in girls golf at home at Old Erie Golf Course on Tuesday in the TVL. The visitors won both matchups.

VVS’ Laney and Lyla Falkenmeyer each medaled with scores of 49.

Camden’s Alexis Tennant medaled with a score of 53.

Oneida’s medalist was Stella Davis with a 54.

VVS, 5-1, hosted Utica Notre Dame in the league Wednesday. Results were not available at press time.

Camden, 5-2, hosts VVS at McConnellsville Golf Course at 3:30 p.m. Friday in the league.