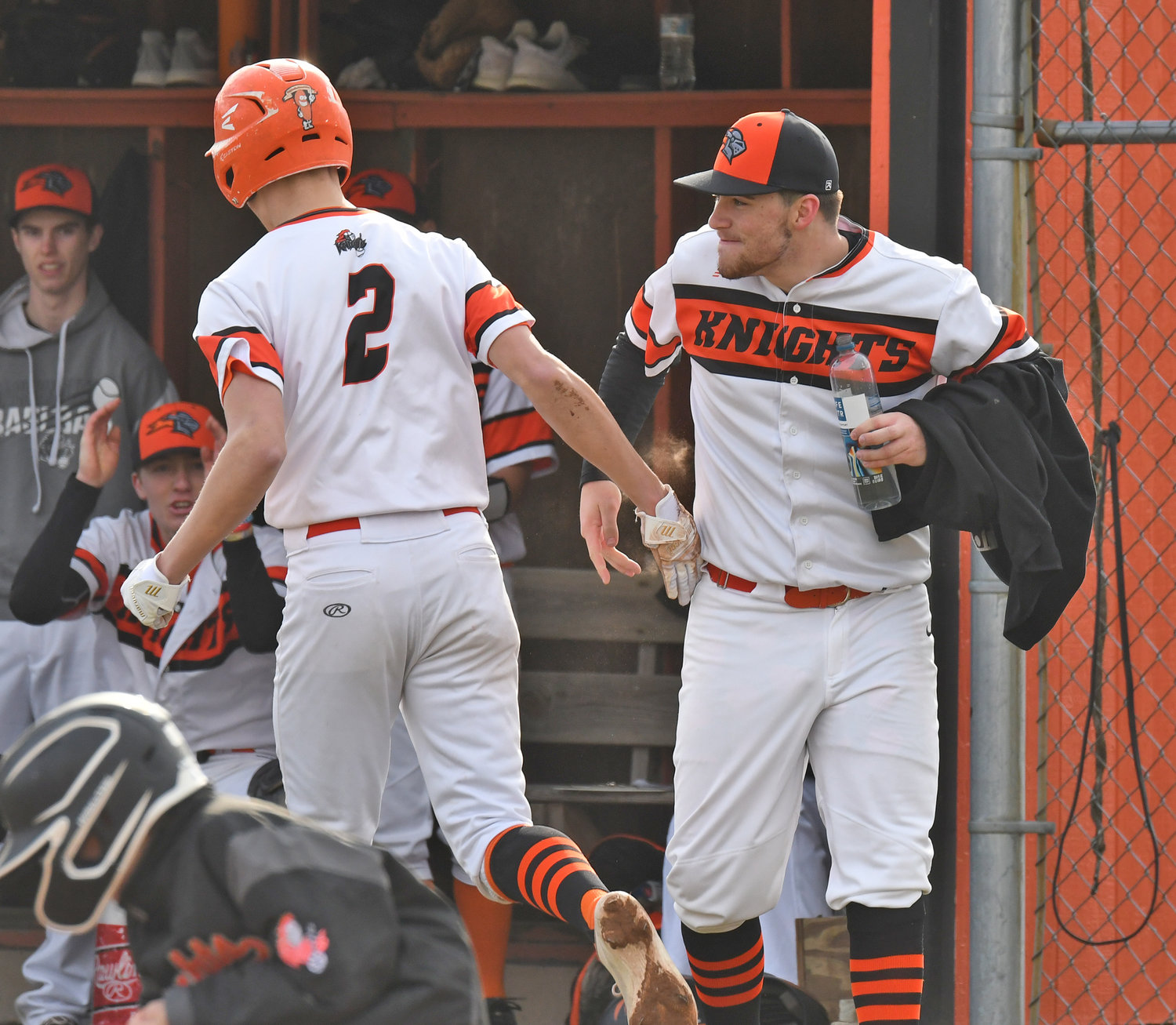 BIG OFFENSIVE DAY — Rome Free Academy starting pitcher Marco Macri, right, celebrates with Jack Lawless after he scored the team’s first run of the game Monday at home against Holland Patent on a sacrifice fly by Jack Anderegg. Lawless had a double, triple, two runs scored and drove in one as RFA won 10-6 in five innings.
(Sentinel photo by John Clifford) 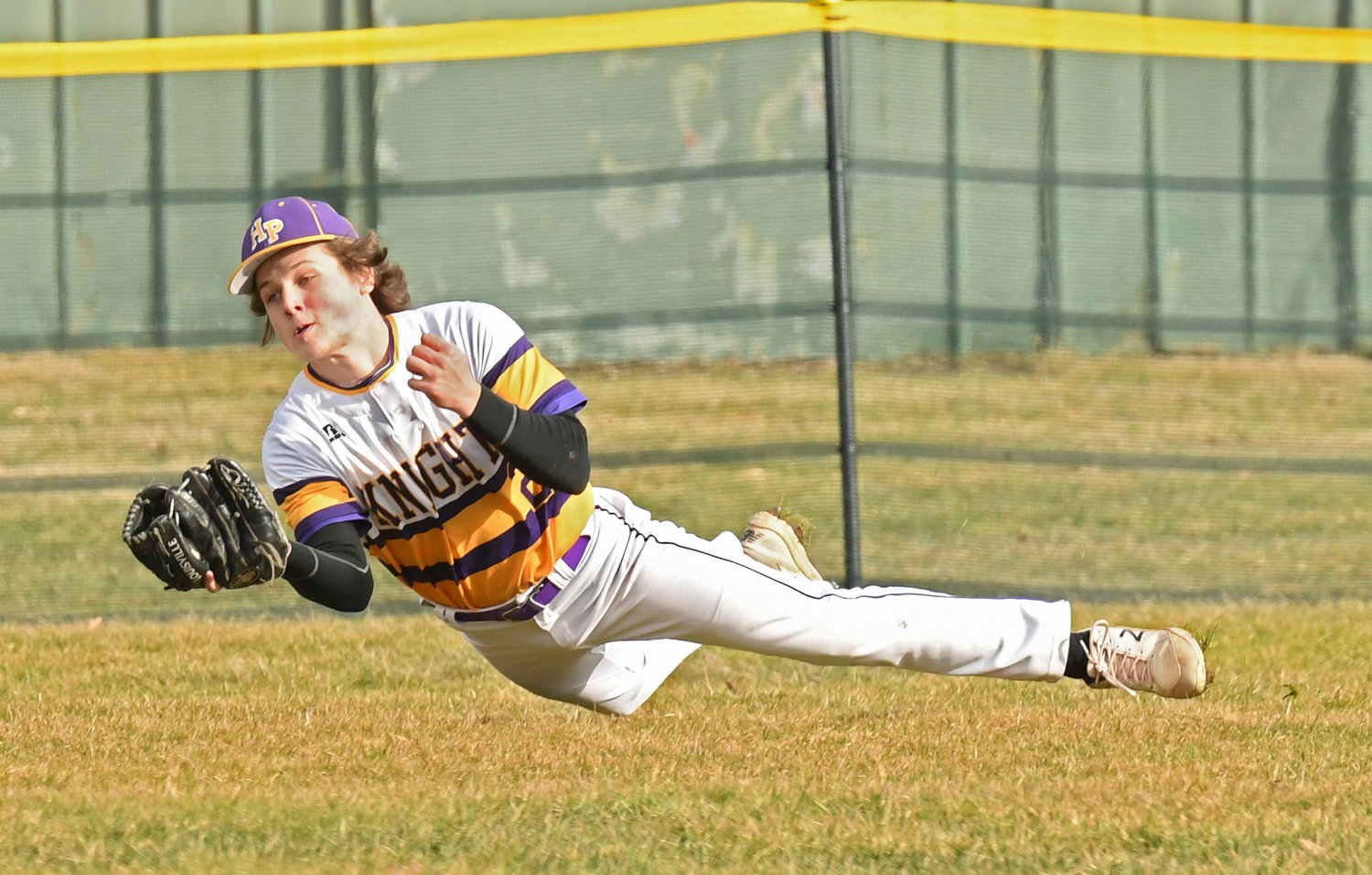 MAXIMUM EFFORT — Holland Patent left fielder Alex Hoole makes a diving catch off the bat of Rome Free Academy’s Richie Artigiani in the second inning of Monday’s game at the RFA Stadium field. The Black Knights came back for a 10-6 win after trailing 6-1 in the middle of the third inning.
(Sentinel photo by John Clifford) 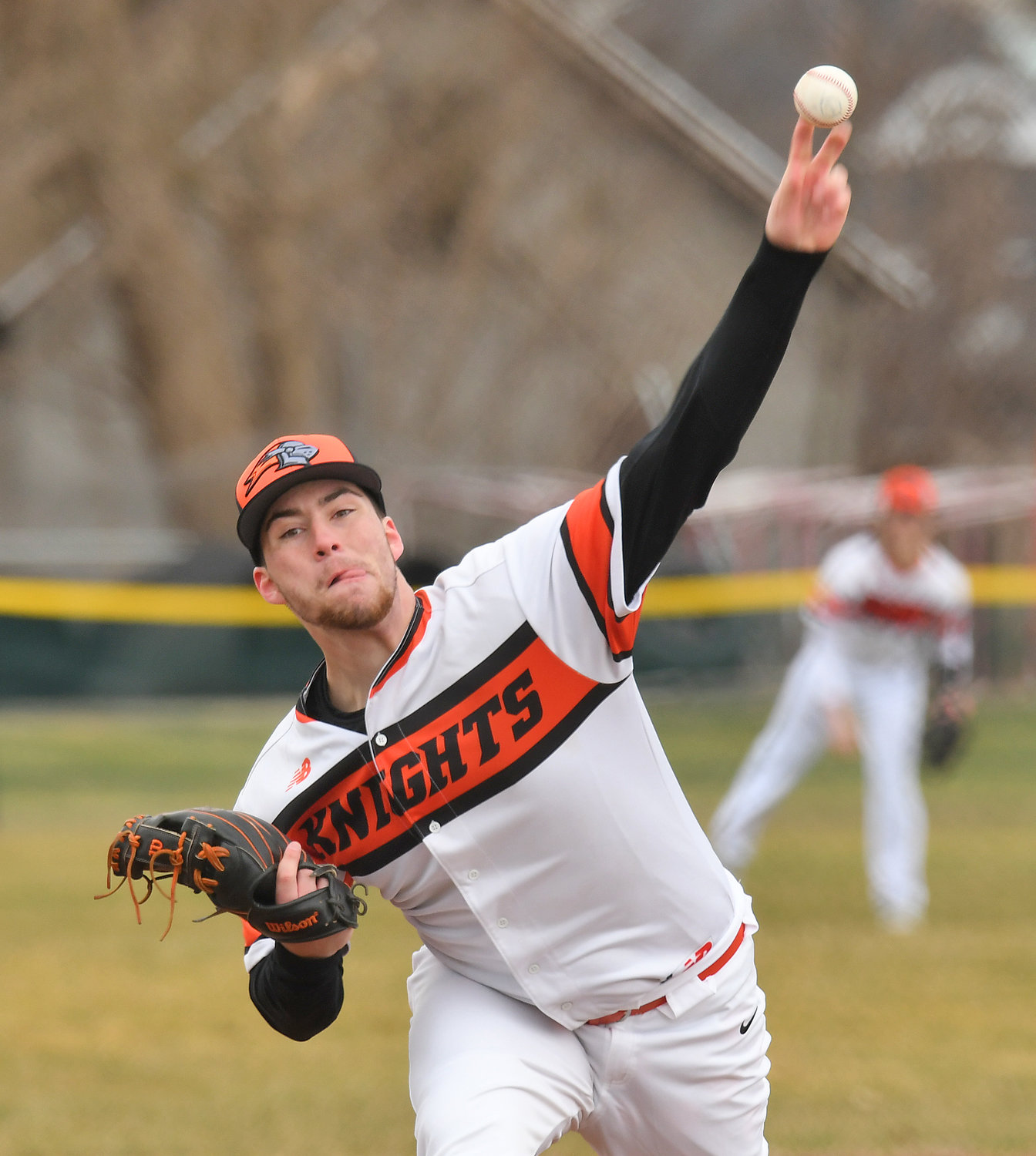 Rome Free Academy starting pitcher Marco Macri makes a pitch in the first inning. Macri went 2 1/3 innings and RFA got a 10-6 comeback win against Holland Patent in the teams' first game of the season.
(Sentinel photo by John Clifford) 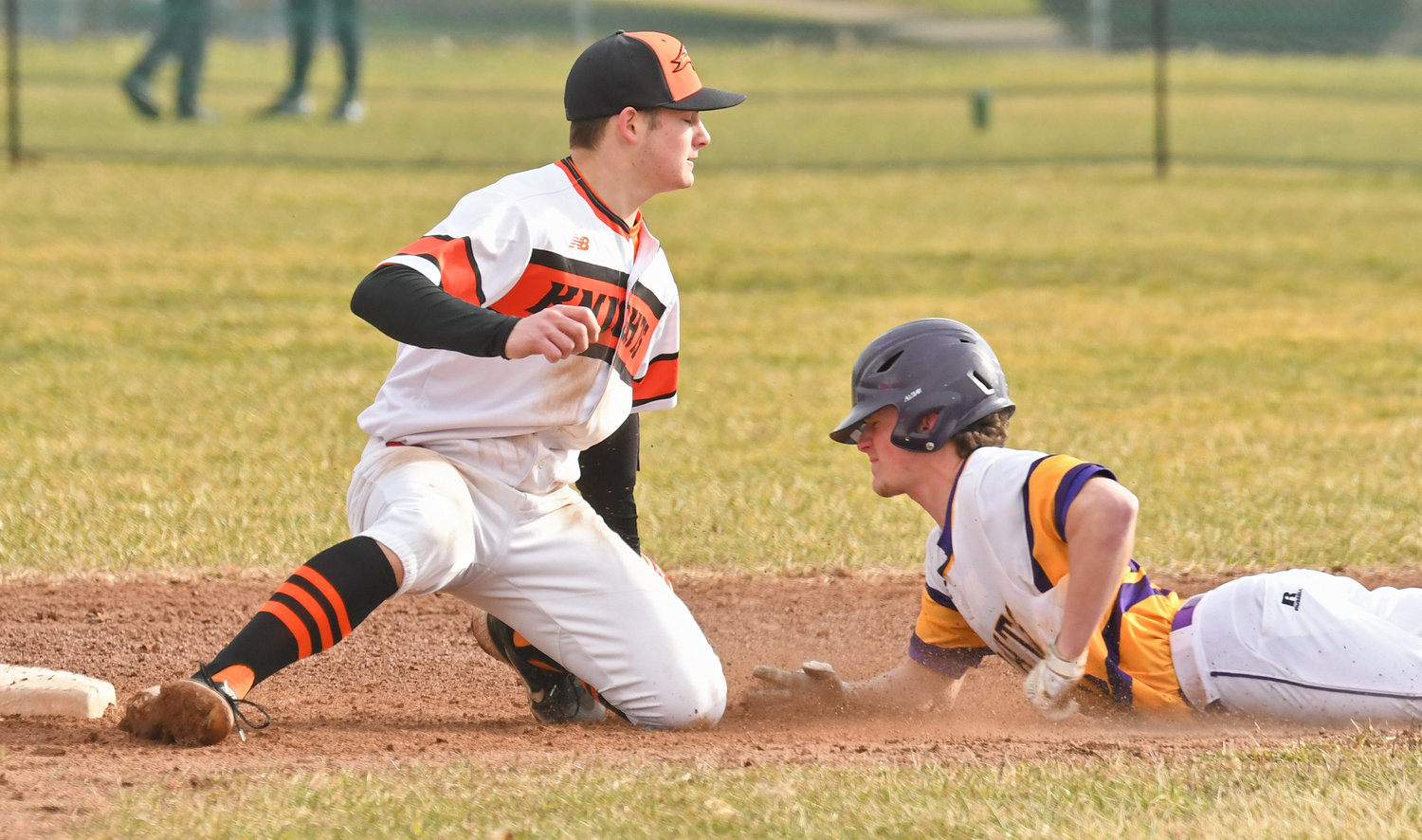 Holland Patent's Jeremy Kelly slides into second with a stolen base as Rome Free Academy shortstop Tanner Brawdy tries to make the tag in the second inning of Monday's game at RFA Stadium. Kelly scored later in the inning for a 1-0 lead but RFA won 10-6.
(Sentinel photo by John Clifford) 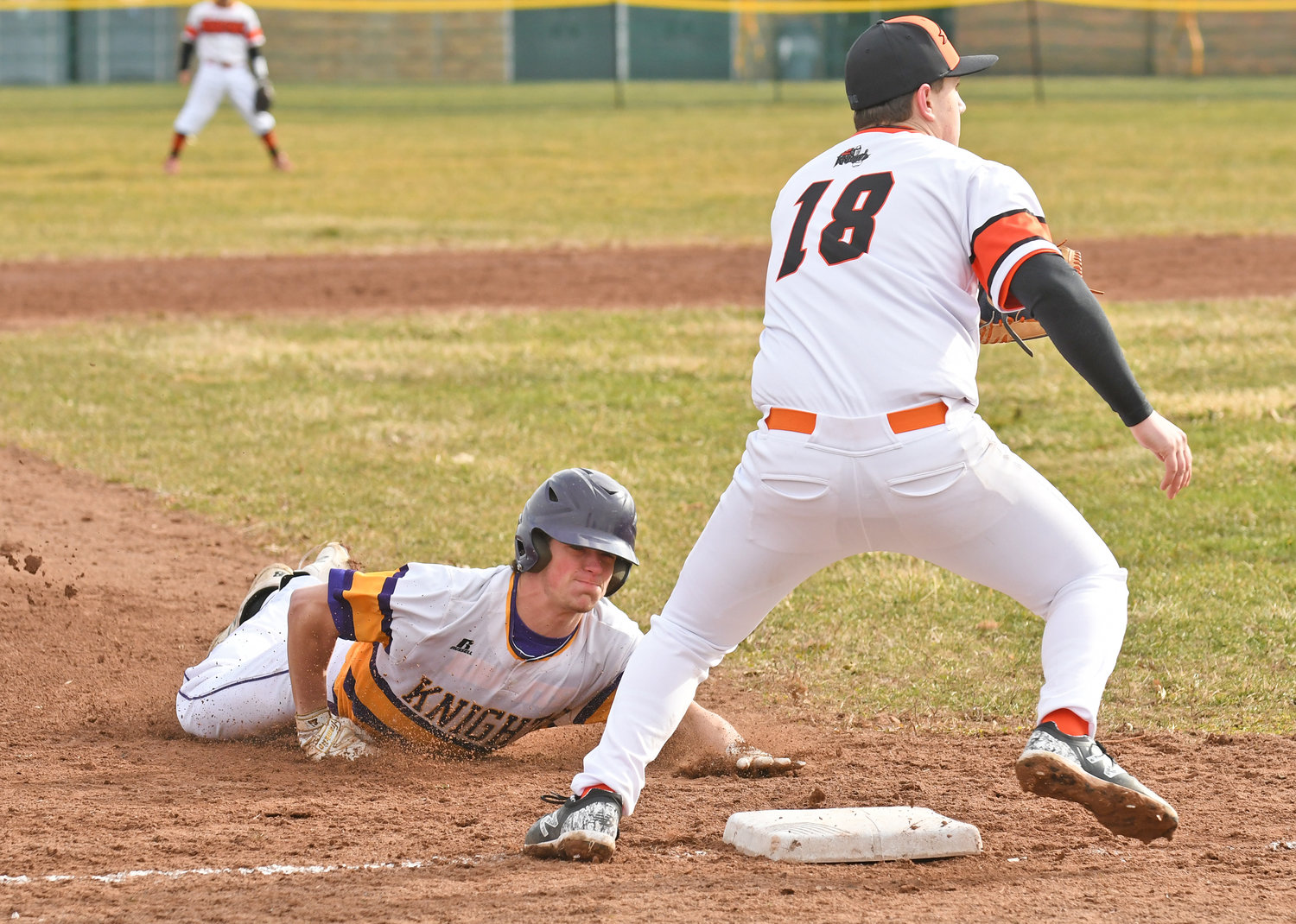 HP #13 slides safely into third with RFA #18 looking to field the throw from home he didn't successfully field the throw and HP #13 got up and went home to score their first run.
(Sentinel photo by John Clifford) 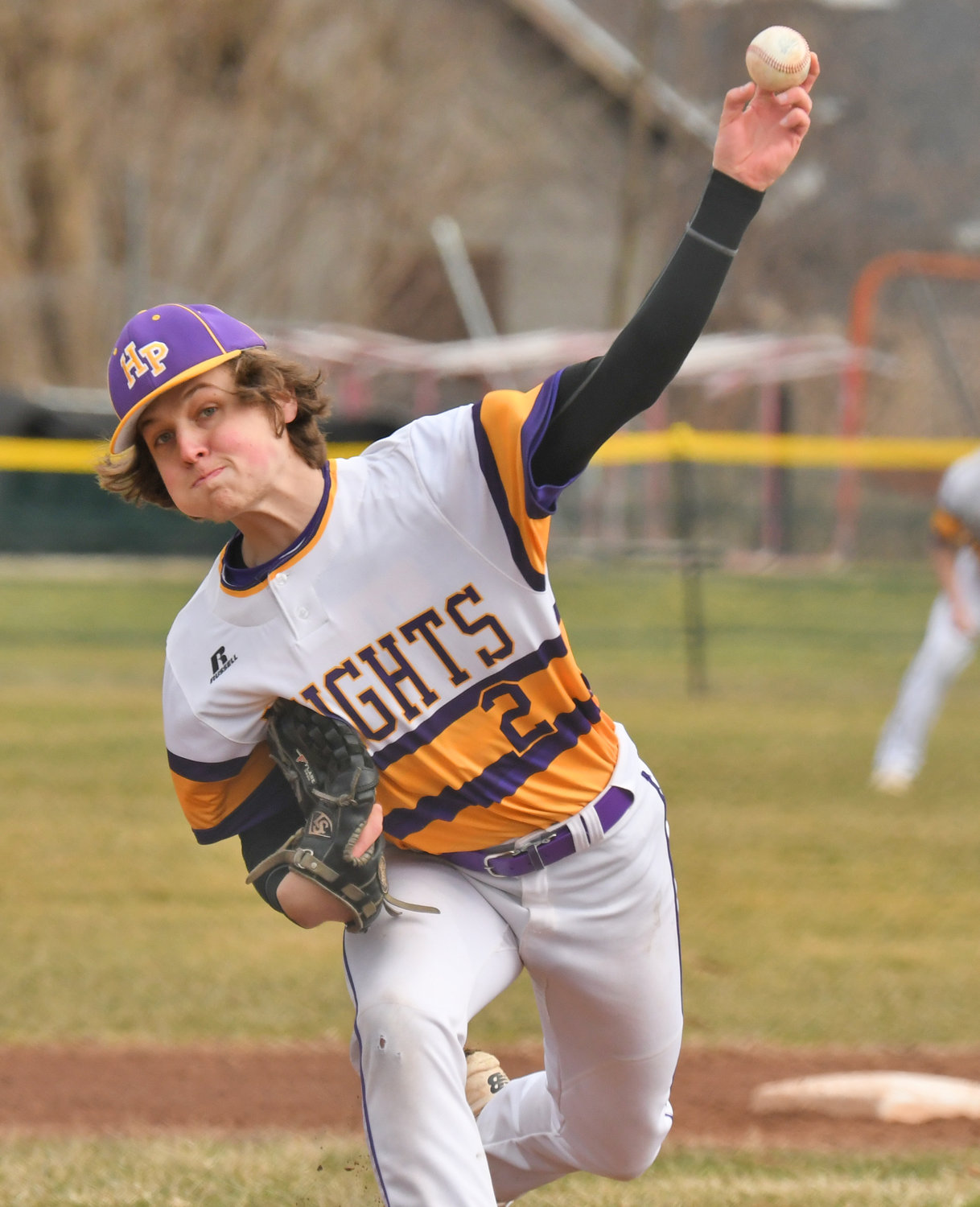 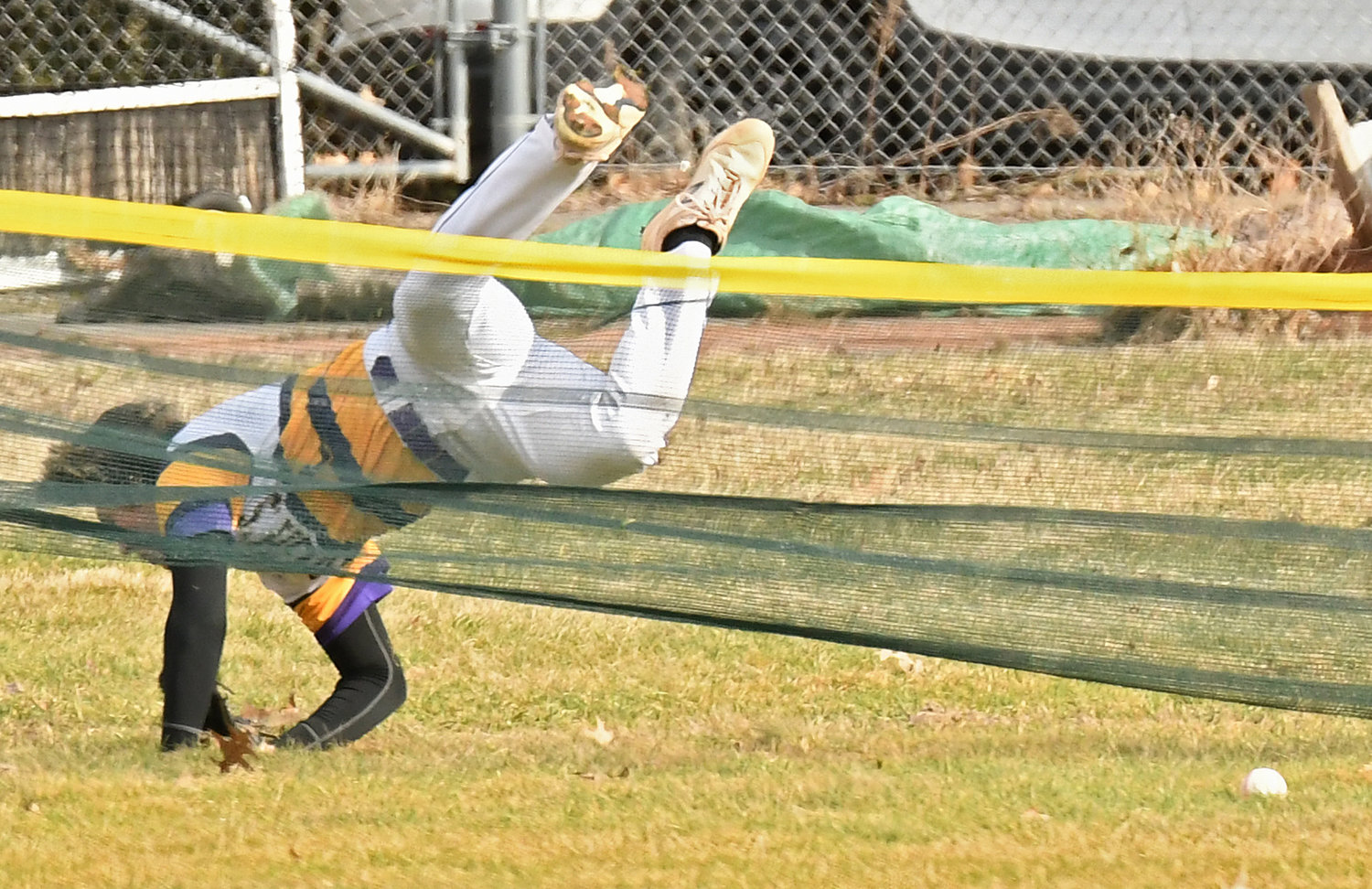 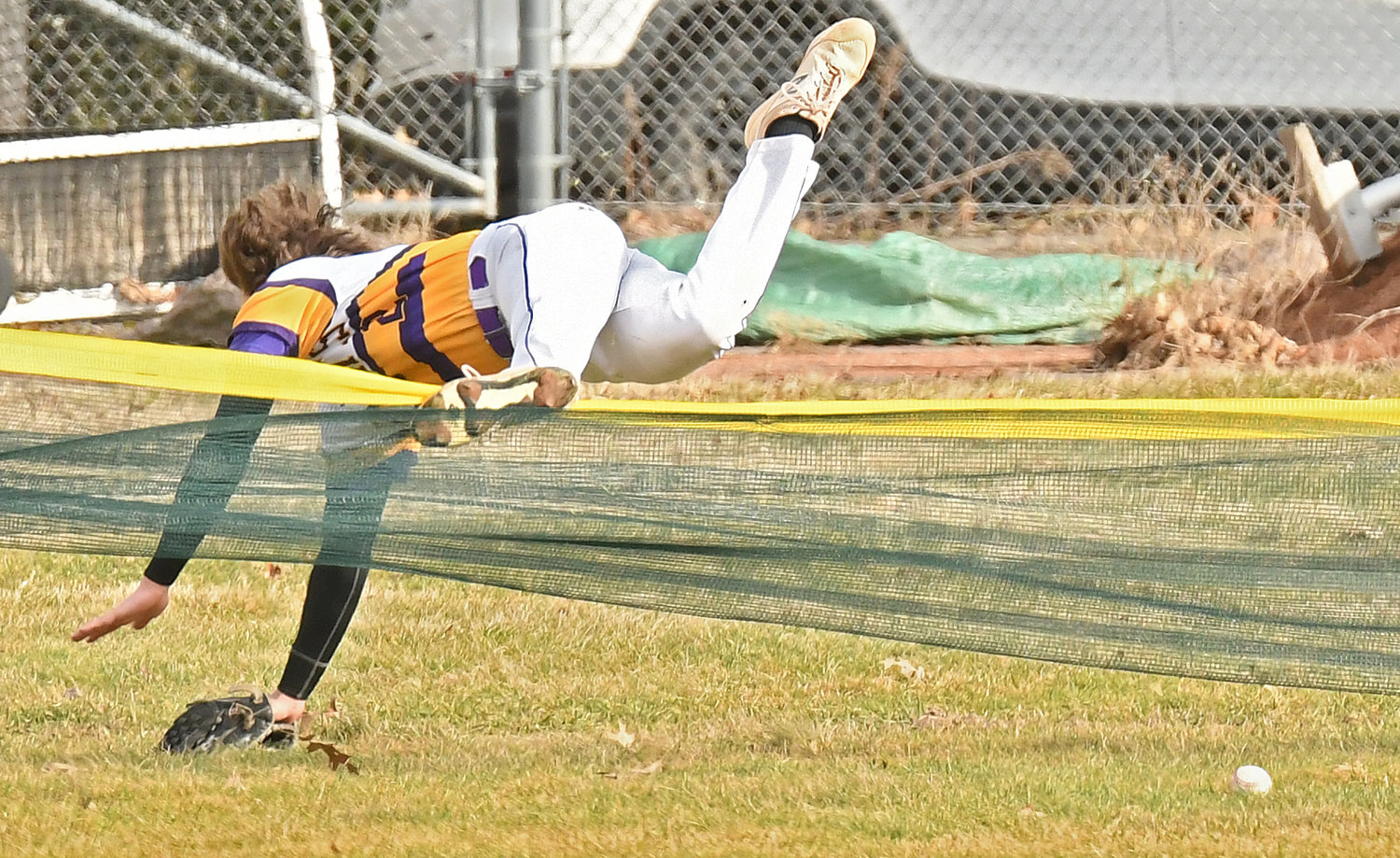 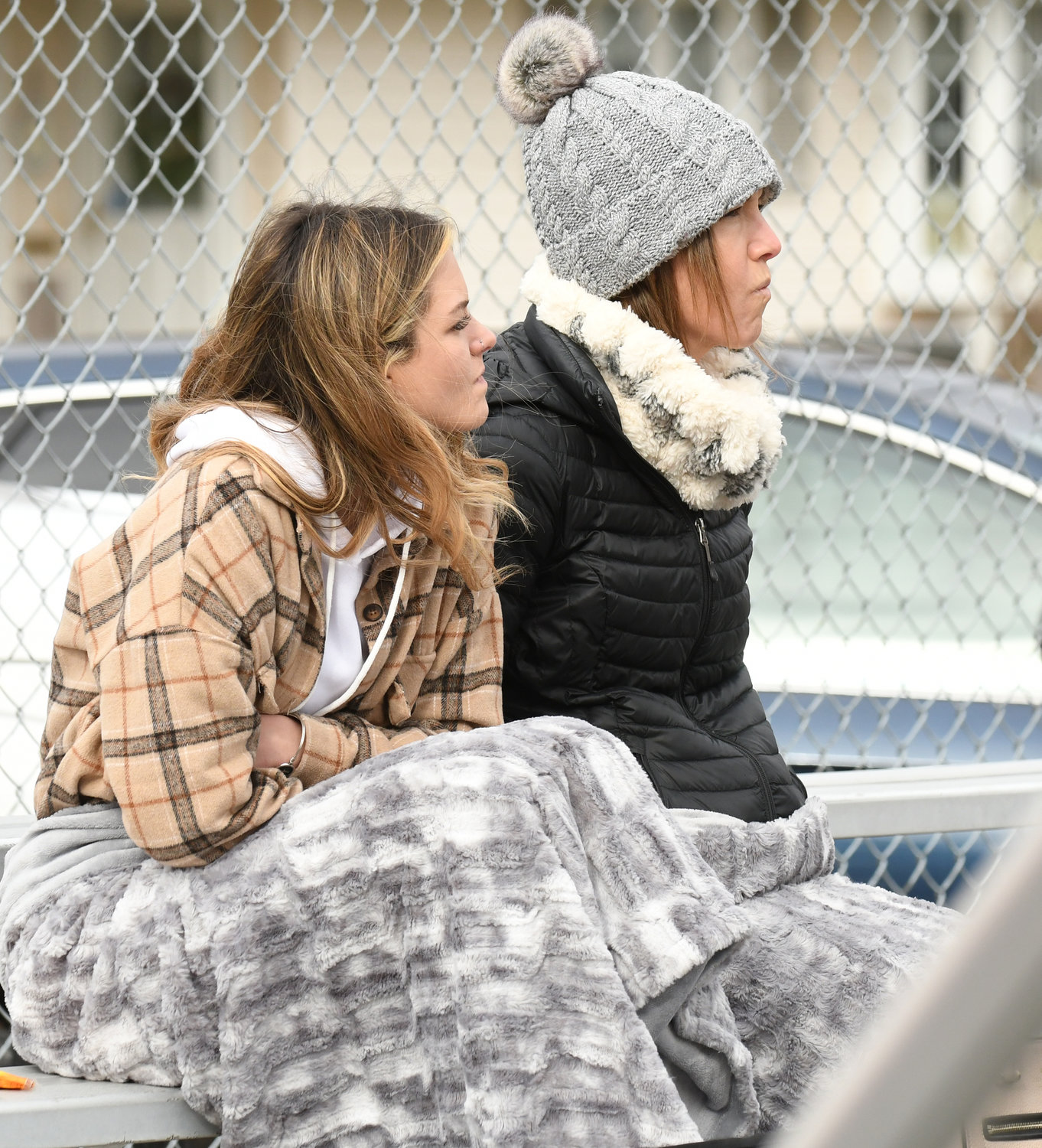 ROME — Rome Free Academy opened the baseball season with a 10-6 win at home Monday, a non-league matchup called off early when Holland Patent’s injuries left them short on manpower.

Holland Patent piled up five runs in the top of the third to take a 6-1 lead but RFA responded with seven runs in the bottom of the inning to retake the lead 8-6.

The Golden Knights got a 1-0 lead in the second when Jeremy Kelly got on base on an error, swiped second and then advanced on a wild pitch before scoring on an error.

RFA tied in up immediately. In the bottom of the second, Jack Lawless led off with a triple and scored on a sacrifice fly by Jack Anderegg to make it 1-1.

The visitors’ five-run inning came on a hit, four walks and a hit batter. With one out, Matt Lux and Brandon Capodiferro walked and Alex McLaughlin was hit by a pitch to load the bases. Caden Briggs then dropped down a bunt and Lux scored. When RFA starting pitcher Marco Macri walked Aiden Rubas to force in a run, that spelled the end of his day on the mound. He gave way to Eli Marrero, who walked in another run. After a run scored on a wild pitch, Alex Hoole poked an RBI single to make it 6-1.

RFA responded in a big way.

HP went to its third pitcher in three innings, Rubas, who walked Jake Premo to open the inning then surrendered a double to Tanner Brawdy. When facing Michael Flint, he hurt his pitching arm and had to come out of the game. In came Jordan Carhart. Premo scored on a wild pitch and Flint hit a sacrifice fly to cut the lead to 6-3. Macri walked then Lawless crushed a double to left field scoring Macri to cut the HP lead to two. He then scored on a wild pitch to make it 6-5. Marrero and pinch hitter John Sharrino both walked with two outs. Richie Artigiani got on via error that scored Marrero and Sharrino on unearned runs to take a 7-6 lead. Premo’s RBI single scored Artigiani to make it 8-6.

“It’s what you get when you start the season when it’s 45 degrees out, but a win’s a win,” said RFA head coach Evan Howard after the win. Though the team made some mistakes, the key was “not letting that one mistake turn into two, three, four,” and then bouncing back. “We didn’t dwell on those things.”

RFA added two runs in the bottom of the fourth to make it 10-6. After Flint singled and Macri walked, McLaughlin came in to pitch. Flint scored on a fielder’s choice, with an RBI to Anderegg. Macri came home when a pickoff throw behind him at third base skipped into left field.

“We hit some balls hard today,” Howard said, and the players hustled on every play. “Overall it was good.”

Lawless said he was pleased with his first at-bats of the season. “I put in the work” in the off-season. “Baseball has always been my game so I wanted to do something with it. I need to keep my head in it.”

After a scoreless top of the fifth the game was called because HP had a few injuries and the team was unable to field enough players.

Marrero earned the win in 2 2/3 innings of relief, allowing three earned runs on one hit with walk and two strikeouts. Macri went 2 1/3 for a no decision. He allowed three runs (two earned) on one hit, while walking two and striking out four.

“Eli Marrero gave us a nice little jolt out of the (bullpen),” Howard said. It was his first varsity pitching appearance.

Hoole started for HP and also got a no decision. He allowed a hit and struck out one in an inning. Luke Benedetto allowed an earned run on two hits in an inning of work. Rubas faced two batters, walking one and allowing one hit; both runners scored after he left the game. Carhart took the loss, going one-plus innings and allowing seven runs (four earned) on two hits and four walks. He struck out one. McLaughlin pitched one inning and allowed no runs on no hits with a strikeout.

RFA is 1-0 and will host Cicero-North Syracuse at 11 a.m. Saturday in non-league play.

The Canastota baseball lost 7-3 at home to Phoenix to open its season Saturday in non-league action.

Canastota was held to two hits — one by Devon Faber and another by Dante Vaughn. Malachi Motley and Jacob Napoli each drove in a run for the Raiders.

Pitching stats were not submitted for either team.

Canastota was set to host Clinton at 4:30 p.m. today in league play.