Rome Free Academy quarterback Evan Carlson-Stephenson got quite an education this summer as he heads into his junior year. 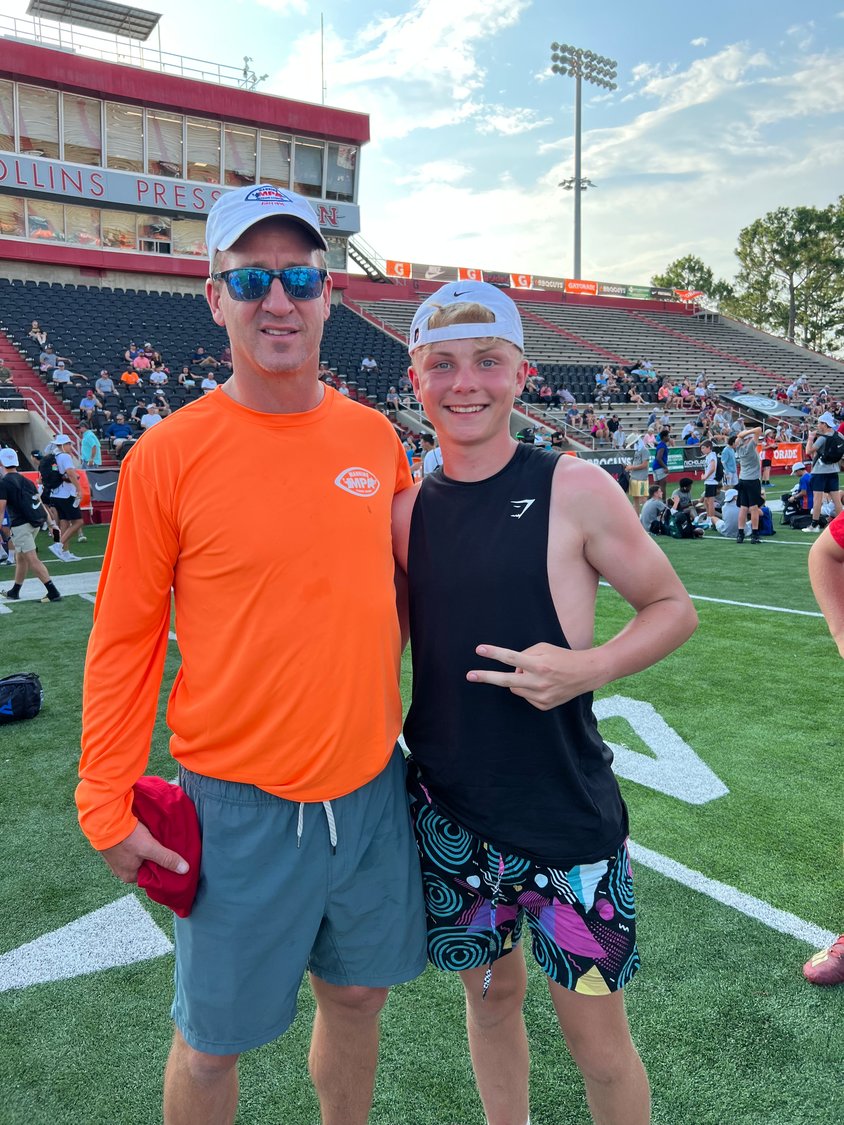 Rome Free Academy quarterback Evan Carlson-Stephenson got quite an education this summer as he heads into his junior year. After starting for the Black Knights last season, he attended the Manning Passing Academy in late June.

The camp, which ran June 23-26 in Thibodaux, Louisiana, was a Christmas gift from his family. “They told me they had it planned for months before that,” he said. “I’d never heard of it before. It was on their radar and they thought it would be a good opportunity for me.”

Carlson-Stephenson said his initial question was “How was I going to react there? There would be four- and five-star recruits there,” players who had committted to playing at Division I colleges. “How I would do and how would I compete against them?” He added, “There were kids there who were amazing, phenomenal. I just got done with my sophomore year and there were kids there going into their senior year.” His plan was to “Go out there and do my thing, go have fun.” But, he added, “My expectations are high for myself. I want to compete at a higher level than everyone else.”

He rode down to the camp with his father, Shad Carlson, and grandfather, Rob Carlson. “The road trip was fun. It was a great way to see the country and the big cities. It was a hell of a way to go look at the country.” They departed on Monday, June 20, to take three days to explore. The trip included going through Cincinnati to see Paul Brown Stadium, where the NFL’s Bengals play, and Nashville to see Nissan Stadium, home of the Tennessee Titans. His thoughts when seeing those places? “Maybe one day I could wind up there, playing for one of those teams.”

He said he loved “seeing the expressions” of his father and grandfather, and seeing “how much fun my family was having.” They arrived the day before the camp started, parking an hour out so he could get settled in and relax, to “experience the entire thing before I went to play some football.”

The first day was focused on registration, getting to their housing and meeting other participants. “My first impression when I got there was to see if it was organized. Would I know where to go? It was really simple, really organized.” They registered and were given armfulls of gear. He got his dorm room assignment, where he shared a room with a player from Long Island. “It was cool to meet people from the rest of the country.”

Day two was primarily meeting everyone involved, with some football. Then two days of “strictly football.” Most of the people leading the camp were college players, with some college coaches also involved. The Mannings were also involved. There were multiple fields at the camp. “On my field was Peyton Manning,” teaching rolling out and throwing on the run. “I was throwing in front of him and he was telling me about what an arm I had. He was praising me pretty well.” He added, “It was pretty cool to hear that from Peyton Manning.”

As a New York Giants fan, it might be expected that Carlson-Stephenson’s favorite Manning would be Eli, who quarterbacked New York to two Super Bowl championships. But not after his experience at the camp. “My favorite Manning? I think I have to give it to Peyton. He seemed like a cooler guy. He had some interesting stories to tell about playing at the NFL level.” And while “Eli was a cool dude, he seemed very busy at the camp.” But, he said, “They were both amazing people.”

Carlson-Stephenson said he learned both mental and physical skills, including leadership abilities. “I got to learn kind of everything,” he said, including reading college level defenses as they compare to high school. The camp instructors critiqued throwing mechanics, teaching him how to get more snap when throwing on the run. He said he also liked competing with players he hadn’t played with before, which he said helped him to be a team player. “My whole thought process was ‘How can I get better for this coming season? How can I make an impact for this team?’”

Carlson-Stephenson said he immediately thought of how he could bring the lessons to RFA. He learned how to analyze “what to expect from different teams,” and thinking about a plan to counter them. “There were a few times that I thought, ‘If had known this it would have affected a game one way or another.’”

He said he was in communication with RFA head coach Jake DerCola while at the camp, texting after a day’s activities. And because it was a camp designed for not just quarterbacks but running backs, wide receivers and tight ends, there were lessons he learned that he intends to bring back to Rome for the Black Knights’ skill players on offense. He’s been working with RFA receiver Ricky Fernandez this off-season at RFA Stadium, showing him routes and techniques. “We’ve been best friends since third grade. We’re like brothers. We have such a good bond. And not just him, a lot of kids are like that. We’re trying to expand that on the team.”

The rising junior quarterback said he wants to bring one thing to his game and to the team this coming season that has nothing to do with throwing technique. “Definitely be more of a leader,” he said. “Last year there was (senior) Ryan O’Connell. The kid was such a leader. He made sure everyone knew what they had to do. That’s my role this year as a junior.” He said he wants to be more vocal. “It comes from me growing as a player and from the camp.” At the camp, he said, the players were great at getting teammates hyped up and ready to play.

Carlson-Stephenson said he often hears people talk about the RFA football teams of the 1980s and 90s. And that, he said, is what he wants to re-establish for the Black Knights. “Bring some of that football back. I want the team to be more smash mouth, successful. Bring back the 80s.”

As for his game, he has goals there too. “For me, success in my mind is everyone giving their 100% best effort.” And while wins and losses aren’t the only measurement of success, “I love to win.” He said the team’s 55-52 win against Nottingham for Homecoming last season was a top experience.

And with two seasons of high school football left, he has plenty of games left to make his mark. “I have more than one year to learn more about the game, and to improve on my skills for this community.”