The annual rivalry game between Rome Free Academy and Thomas R. Proctor football is here again. Both teams won by razor thin margins last week and are looking to move up the Class AA standings with a win Saturday. 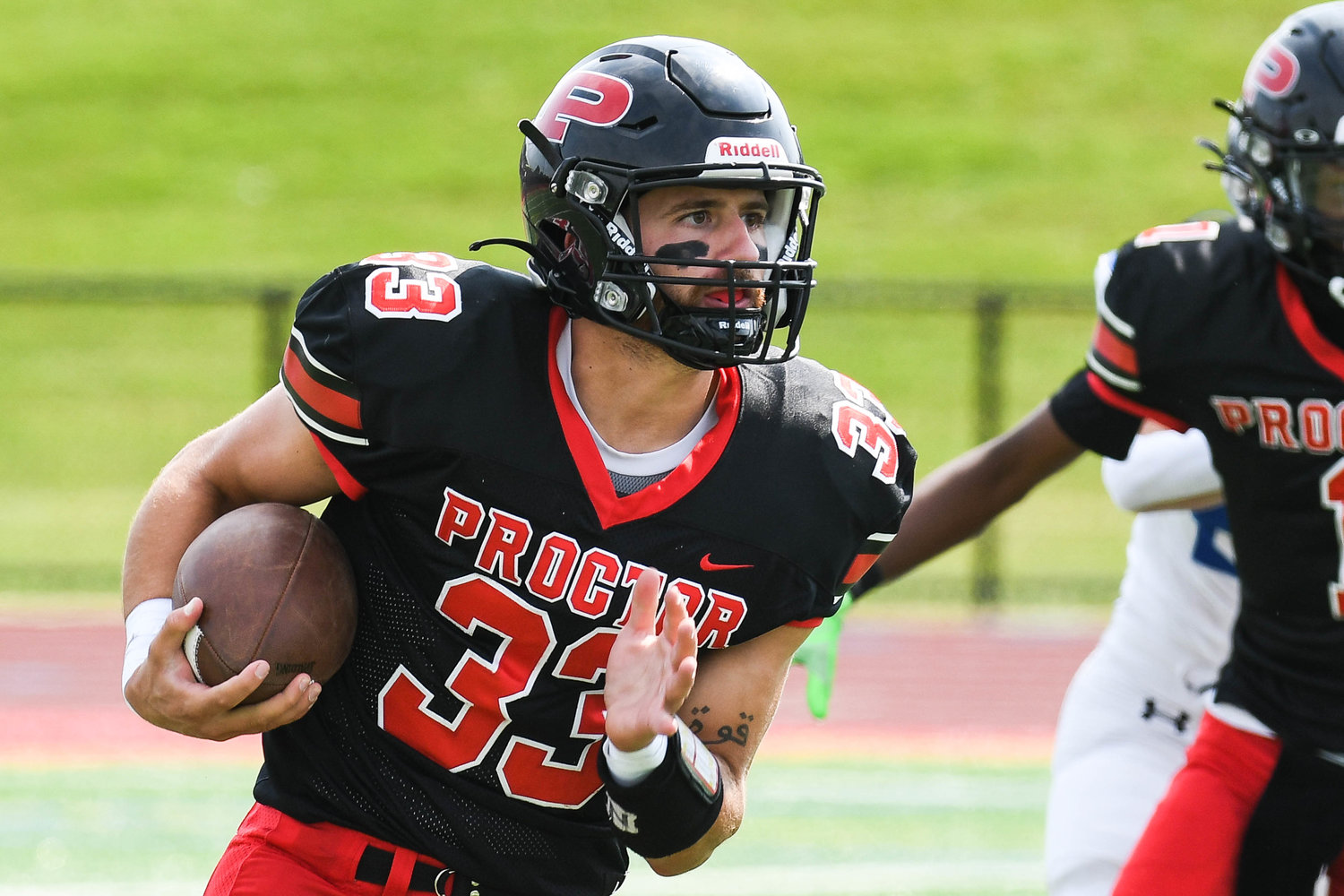 The annual rivalry game between Rome Free Academy and Thomas R. Proctor football is here again. Both teams won by razor thin margins last week and are looking to move up the Class AA standings with a win Saturday.

The game starts at 1:30 p.m. at D’Alessandro Stadium in Utica.

“It’s usually our only local game,” said Utica’s head coach, Steve Strife. “The kids play Pop Warner against each other,” as well as in other leagues such as AAU basketball and American Legion baseball. “It’s a big game for us, a rivalry game. Big for both communities.” It might also have playoff implications, he noted, as the team that wins should be a higher seed than the other as it improves in the standings.

“All of the kids look forward to it. It’s a great rivalry that’s been there for years and years. And the kids know each other,” said RFA head coach Jake DerCola. “It doesn’t matter what the records are, you know you’re going to get a good, hard battle.” It is, he said, “the game we want to win.”

Proctor is 1-1 on the season, with a 44-6 loss at Christian Brothers Academy in week one and a 62-60 win at home against Whitesboro last week.

The Raiders’ offense has had plenty of success on the ground. Senior quarterback Todd Abraham has 33 carries for 334 yards and four scores. Senior running back Domante Cook has 128 yards on five carries with a score. The team has a total of 784 yards and seven scores on the ground in two games.

Abraham is 9-of-20 passing for 187 yards, two scores and an interception. Cook has two catches for 120 yards. Both were TDs.

“We’re going to run what we’ve run. We’re a run-first offense, jet sweep,” Strife said. But the defense dictates what the team will do as well, he noted, and if the Black Knights move up to load the box to stop the run, Proctor will pass. Running sets up play action passing, he added. “We’re a tough matchup because the offense we run, people don’t see it much. And we have a dynamic quarterback.”

The Raiders have also improved their edge blocking over the course of the first two games. That’s critical, since “we run everything off of our sweep.” Though it’s early in the season, the line lost a key player in junior center Ayden Potter, who tore up his knee in the CBA game.

Strife continued, “Defensively, the first week we were at the mercy of a team that could run it or pass it.” Then, Whitesboro used offensive schemes that worked well against what Proctor was trying to do. “We got better at the end of the game, got some stops.”

The Raiders will look to take away some of Rome’s top weapons, including senior Jack Lawless, Strife noted. The receiver leads RFA with 24 catches for 310 yards. He also has three scores.

Proctor plays a 4-2-5 base defense because the team faces so many spread offenses, including RFA. The plan, said the coach, is to force the Black Knights to run the ball.

“We need to get a few stops early on defense. Our offense is starting to click. If we execute, there’s not a lot of teams in our league that will totally stop us, stone wall us,” Strife said. Proctor’s defensive goal is to prevent the deep ball.

Junior Evan Carlson-Stephenson has been airing it out every game this season, with 57 completions on 109 attempts for 715 yards, eight scores and a pair of interceptions. Sophomore Lebron Bowman has 14 catches for 242 yards and four scores (as well as a 96-yard kick return TD).

Junior Sal Martelli has had virtually all of the carries out of the backfield for RFA, with 28 rushes for 144 yards.

“We’re still growing, getting better. The nice part is we’re moving quicker along. The guys are understanding the concepts,” DerCola said. “Also, we’re getting better with the blocking up front.” And, “We’re still young,” with only three senior starters and a skill group made up mostly of juniors and sophomores.

“Their defense will probably key on Jack (Lawless) so we have to find different ways to get him the ball,” DerCola said. He noted that RFA does have a bit of a blueprint for attacking the Raiders’ defense, which has given up 106 points total in two games. However, while Rome can try to replicate other teams’ successes, he noted that CBA has an elite offense and the Whitesboro attack is quite different than RFA’s. The main question, he said, is: “Are they going to bring pressure” and play man-to-man coverage, or play back to prevent big plays? Either way, he said, “We have to win the one-on-ones battles.”

Stopping the Proctor offense, he said, will be a challenge. “They’re coming off a great win against Whitesboro. And Whitesboro usually has a solid defense, and they put up a lot of points on them. Their quarterback is a great athlete,” with Abraham committed to playing Division I baseball at Binghamton. He’s the son of one of the coaches who knows the offense completely. “We have to do our assigments, making our key reads, coming downhill, filling gaps and making tackles.”

Proctor, he said, does “a very good job of misdirection. They try to get you outnumbered to a side and attack you there.” And with a quarterback who is a threat to run, the tailback can also be a blocker, adding another assignment challenge for the RFA defenders. “Try to take the ball out of their top guy’s hands and make someone else beat us,” DerCola said of the key for his defense.