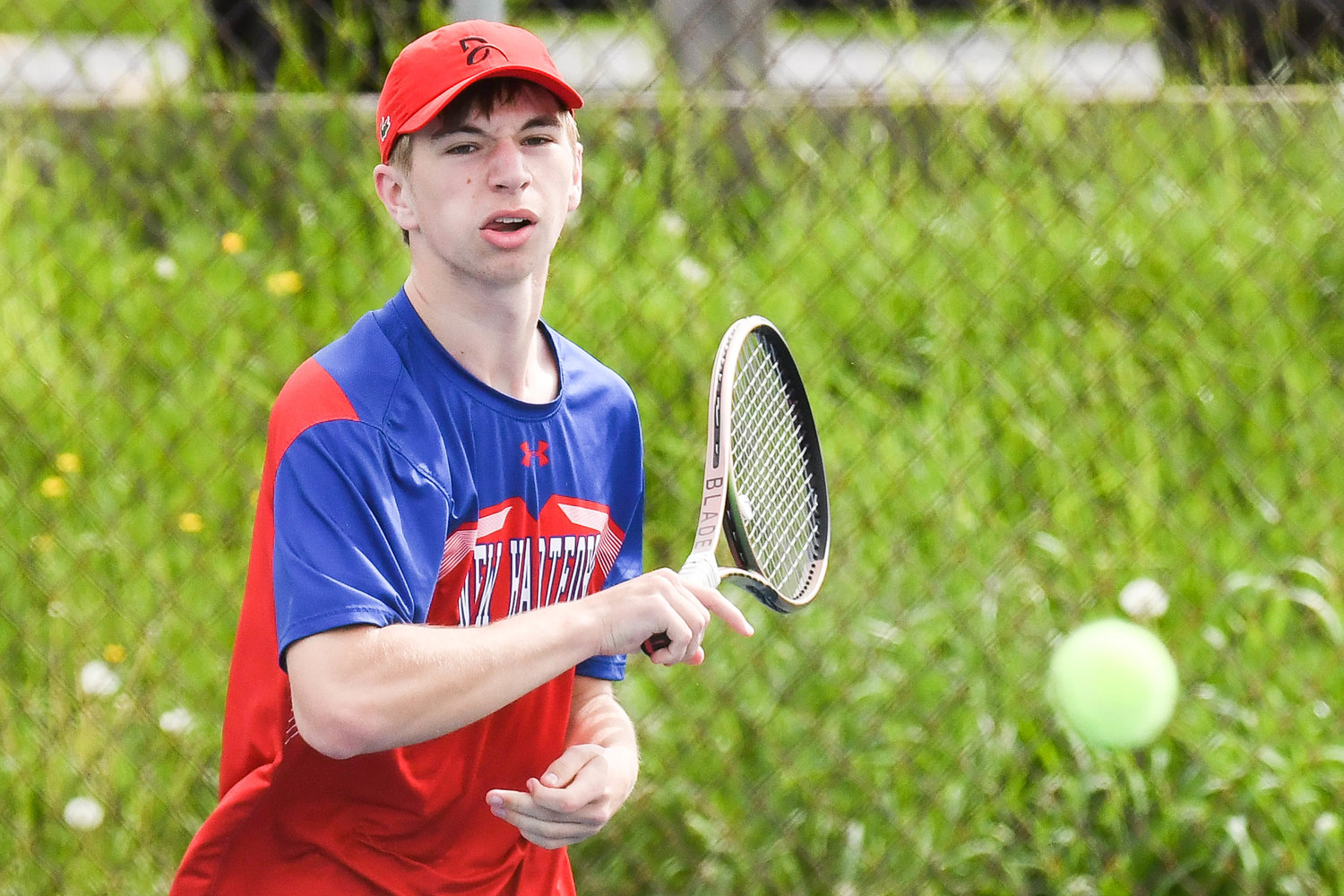 New Hartford’s David Fenner competes in the Section III Class B postseason in first singles at the Parkway Center tennis courts in Utica, which he won. Fenner has earned a spot at states for his performances at the Section III state qualifier this week at the Parkway. He was playing Thursday in the finals of the qualifier though results were not available at press time.
(Sentinel photo by Alex Cooper) 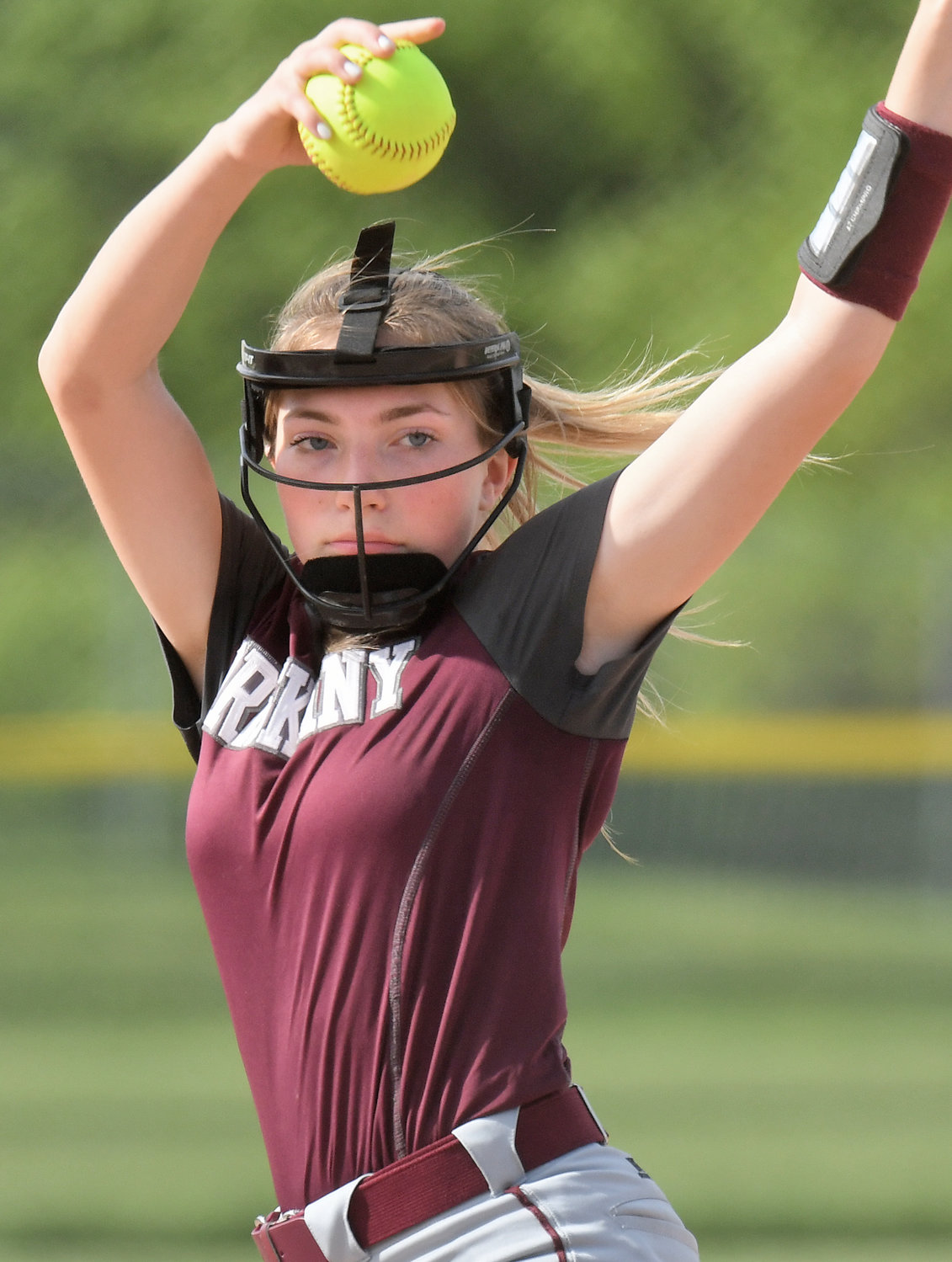 Oriskany junior pitcher Juliette Tagliaferri winds up for a pitch versus Sackets Harbor in the team’s 7-4 win in the quarterfinals of the Section III Class D playoffs. In addition to getting the win in the circle, Tagliaferri had two hits, two runs and an RBI at the plate.
(Sentinel photo by John Clifford) 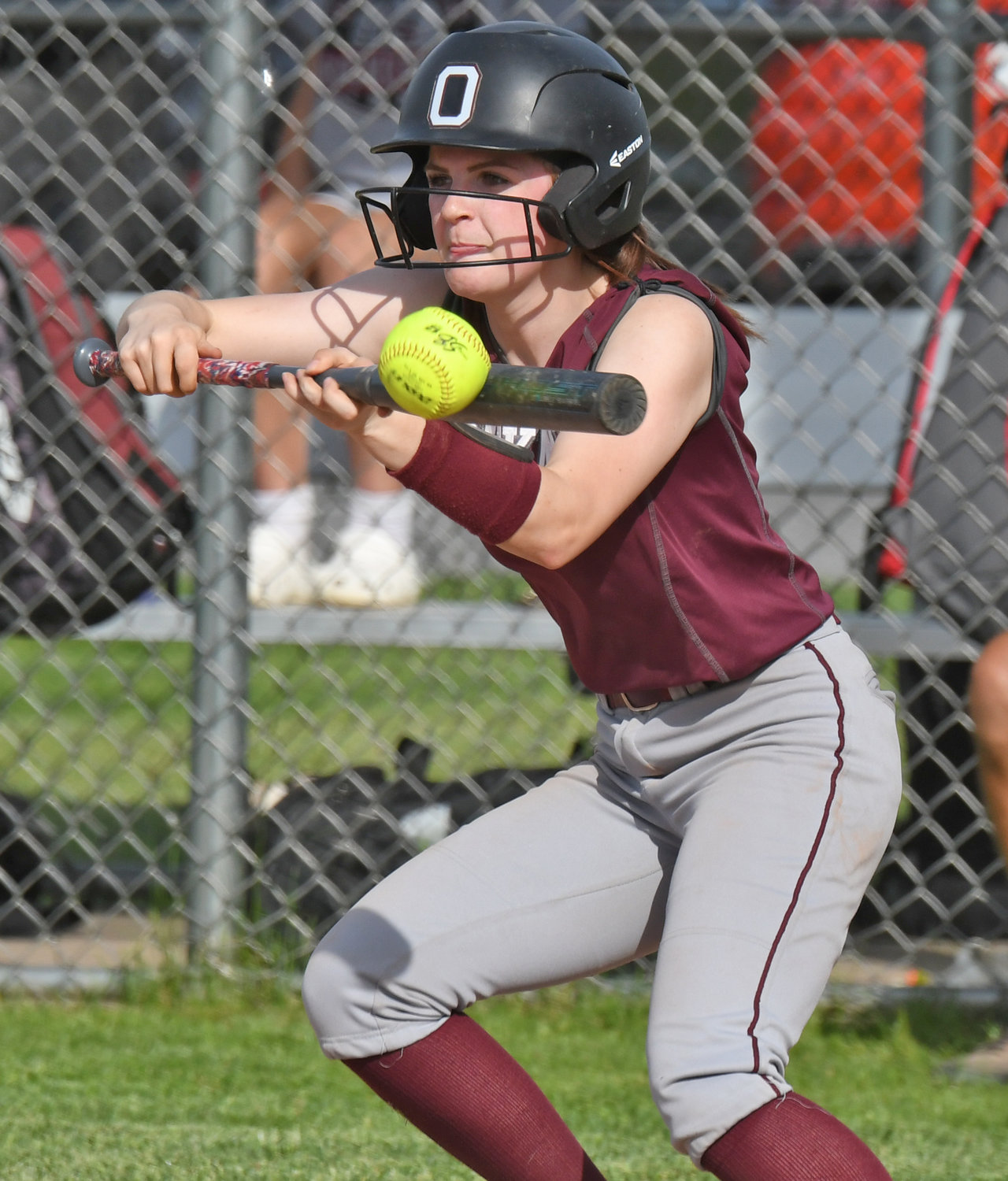 Oriskany's Brooke Matys bunts against Sackets Harbor in a 7-4 win to advance to the Section III Class D semifinals. Matys scored a run to help the team to the win.
(Sentinel photo by John Clifford) 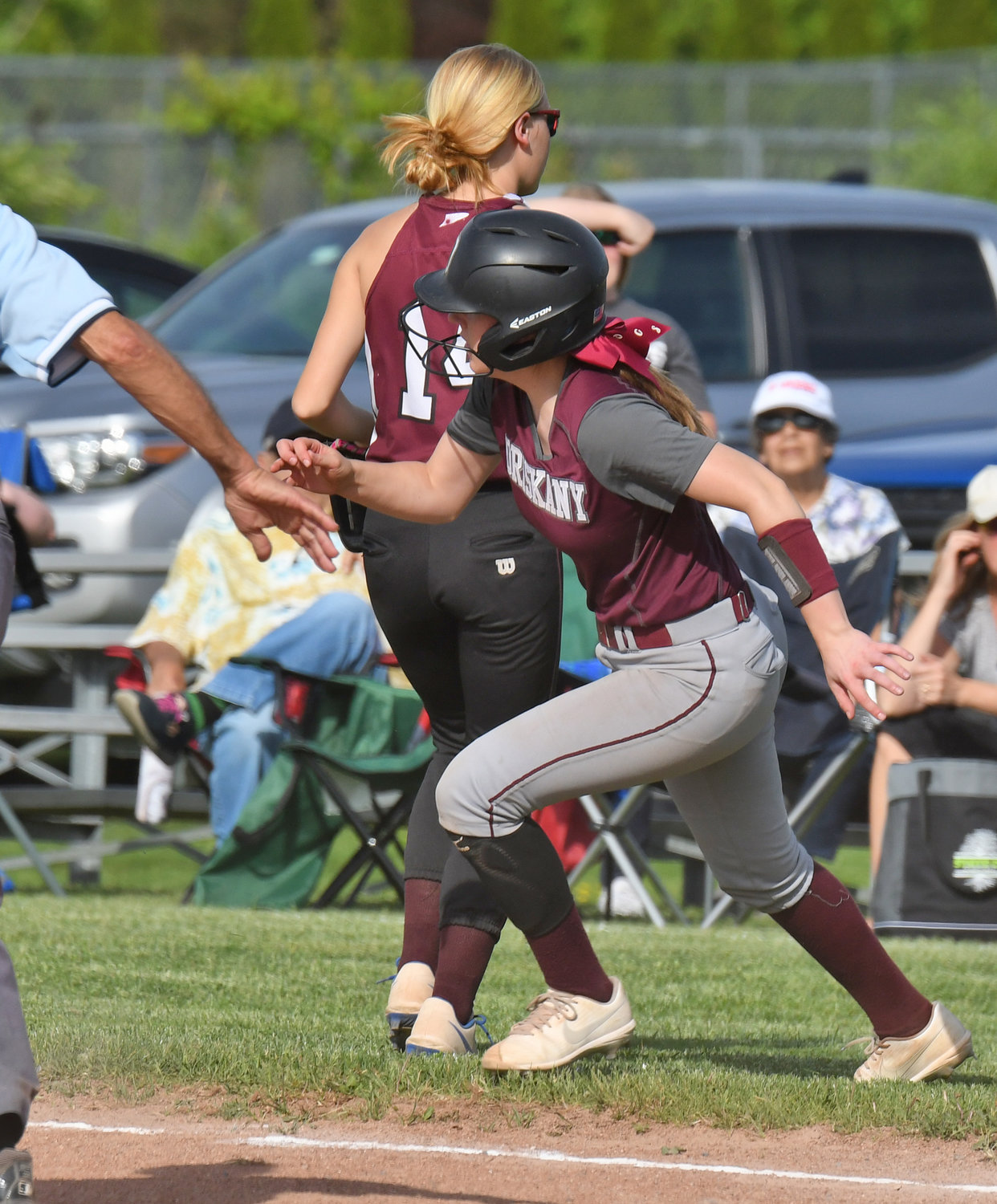 Kaelyn Buhler of Oriskany turns to run to second base after the ball was overthrown to first base. She scored later in the inning, which proved to be the game-winning run in the team's 7-4 win over Sackets Habor in the Section III Class D quarterfinals.
(Sentinel photo by John Clifford)
Previous Next
Posted Thursday, May 26, 2022 8:05 pm

Cicero-North Syracuse won the team title with 178 points. RFA had 131 points. Fayetteville-Manlius was third (80) and Utica Proctor was fourth (58).

Pugh won the 100 hurdles in 15.4 seconds. She was second in the long jump, third in the high jump and fourth in the 400 hurdles.

Frost won the discus with a throw of 89 feet, one inch. She was third in the shot put.

Kaylee Bertini was second in 400 hurdle, second in the high jump and fourth in the 100 hurdles.

In the boys meet, RFA was seventh with 40 points. Host school Baldwinsville won with 168 points. Proctor was ninth with 24.5 points.

William D’Agata of RFA won the pole vault with 11 feet.

Fenner was in the finals against Cooperstown’s Gunther Weldon. Fenner won the Section III Class B first singles title.

The top three singles players move on to states. That means the winner of the consolation match for third place will also advance. That match was between Baldwinsville’s Antonio Marsallo and Fayetteville-Manlius’ David Fernando.

In doubles, the top three pairs advance to states as well. The championship match Thursday was between Jamesville-Dewitt’s Mark Bratslavsky and Luke Cantone and F-M’s Jaden Duggal and Davin Woolridge.

The other spot in states will go to the winners of the consolation final between F-M’s Fergus Brady and Andrew Li and Baldwinsville’s Max Funiciello and Nick Licciardello.

Trailing 3-1 in the bottom of the fifth inning Thursday, the Oriskany softball team put up three runs to take a 4-3 lead. The two seed went on to a 7-4 win against seventh-seeded Sackets Harbor in quarterfinals of the Section III Class D playoffs.

Juliette Tagliaferri had two hits, two runs and an RBI at the plate for Oriskany. Ashley Reid drove in three runs.

Tagliaferri also got the win in the circle. She allowed seven hits and struck out three.

Oriskany will take three-seed Brookfield, which topped 11-3. Results of that game were unavailable at press time. The semifinal game is set for 1:30 p.m. Saturday at Oneida High School.

Oneida softball falls
The second-seeded Oneida softball team had 3-0 lead after three innings Thursday before visiting seventh-seed Westhill rallied in the next two innings to earn a 7-3 win in the Section III Class B quarterfinals.
The setback ends Oneida's season at 14-5 overall.
Kennedy Curro had two runs batted in and Olivia Friend added one for Oneida. The team had five hits, each from a different player. However, the team also had three errors.
Oneida pitcher Kerrigan Crysler struck out nine batters and didn't walk any, but allowed four earned runs.
Westhill's Abigail Cottrell led the team with 3 runs batted in. Hannah Schmitz allowed five hits and three runs with seven strikeouts and two walks in the complete game win.