The Baldwinsville defense stifled Rome Free Academy’s offense and the Bees’ running attack was sharp in the team’s first game of the season. 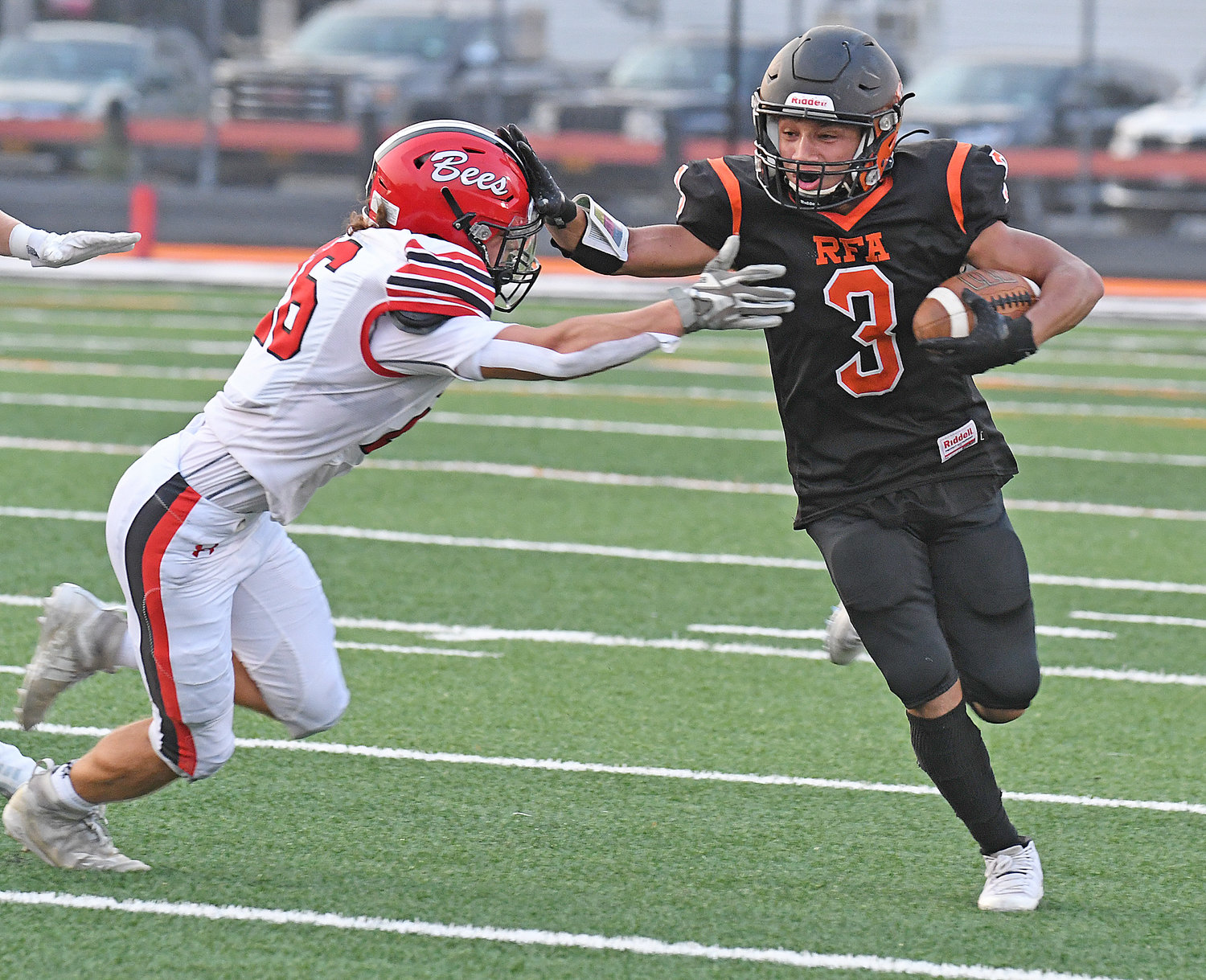 Lebron Bowman stiff arms Baldwinsville's Kaleb Paul in the first quarter of Friday night's game at RFA Stadium. Bowman scored on a 66-yard throw-and-catch in the second half but RFA lost 55-13.
(Sentinel photo by John Clifford) 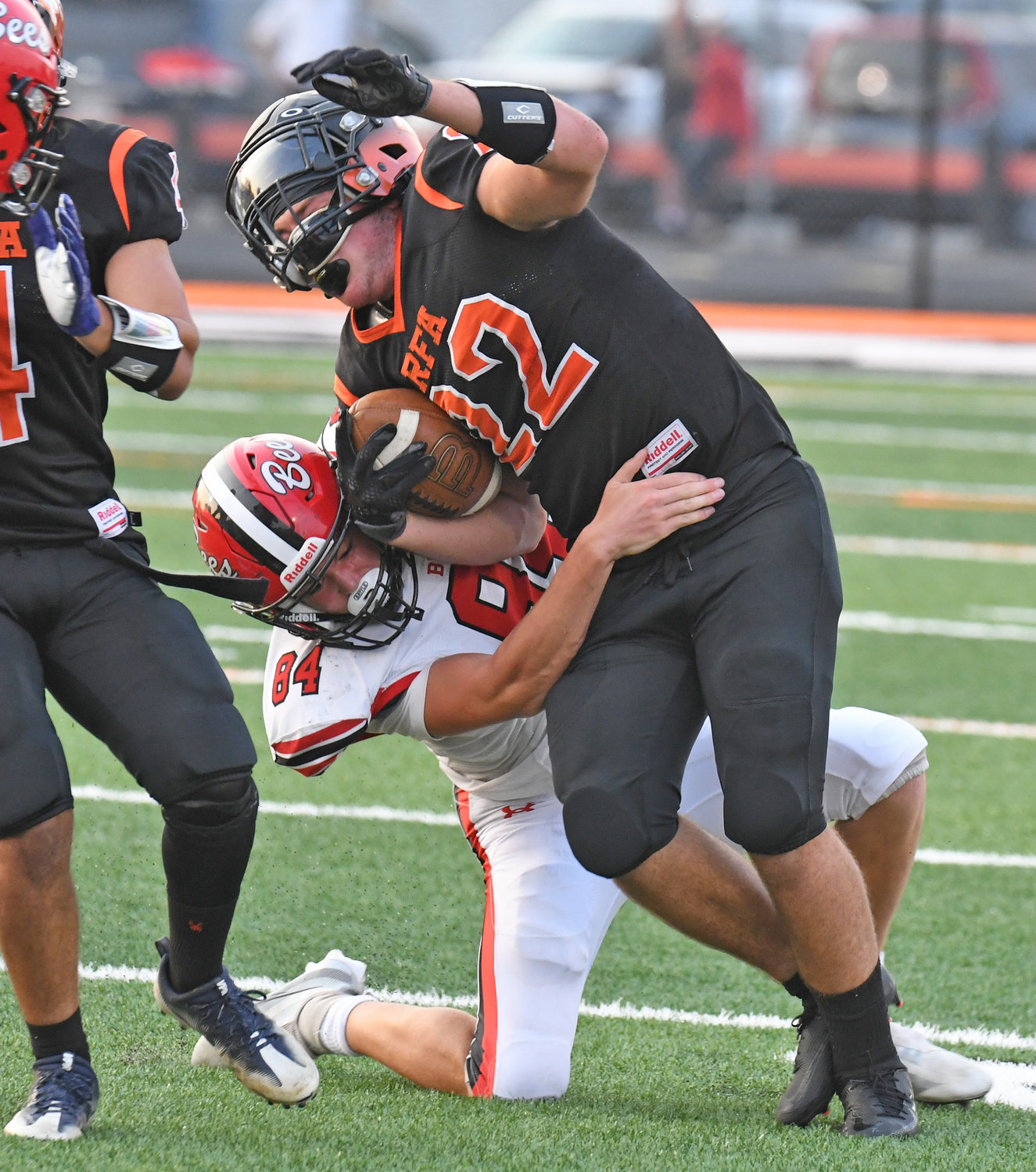 Rome Free Academy running back Salvatore Martelli is tackled by Lucas Fawcett of Baldwinsville in the first quarter at RFA Stadium Friday night. The Bees' defense held Martelli to eight yards rushing in the game and the visitors won 55-13.
(Sentinel photo by John Clifford) 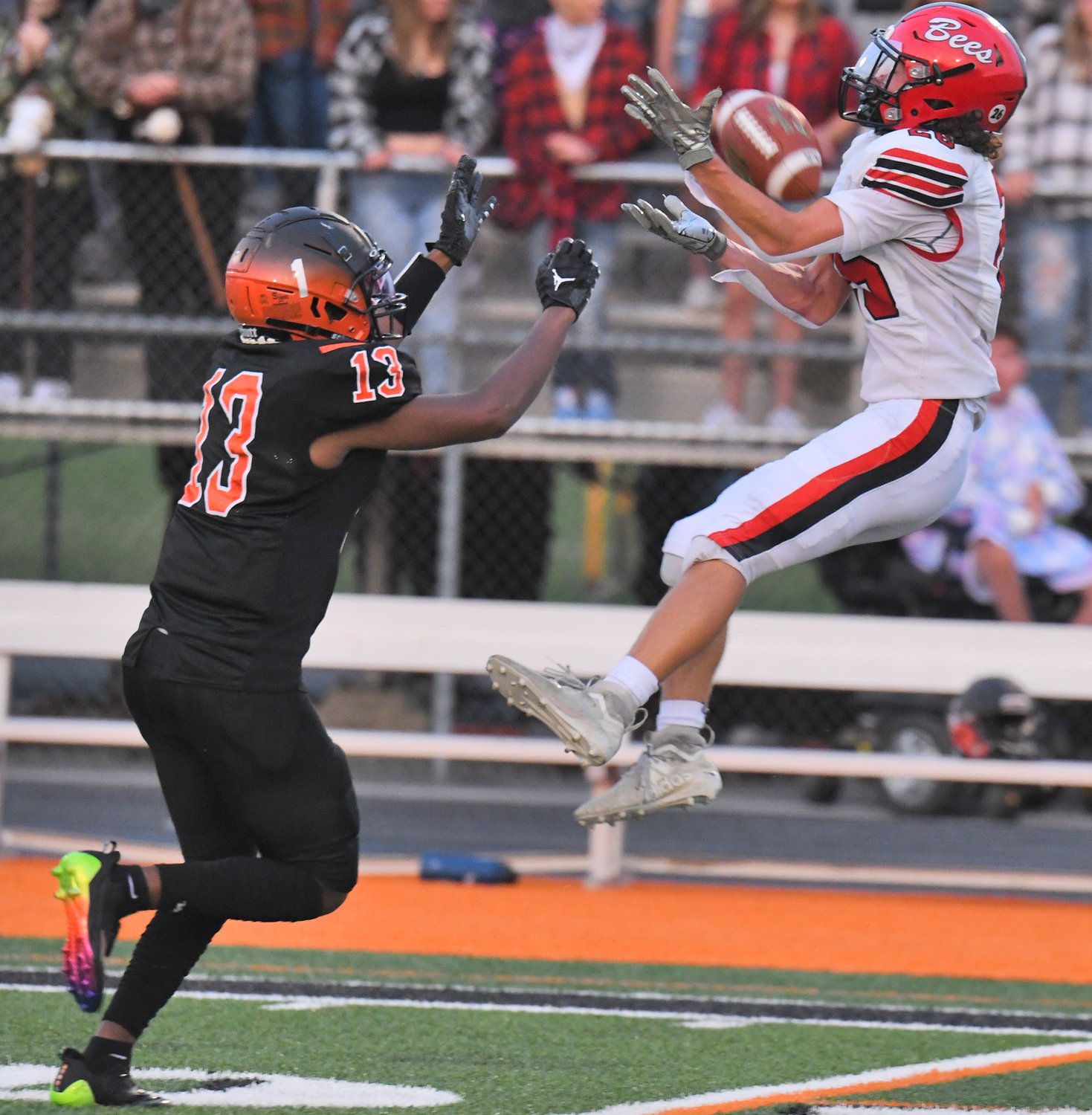 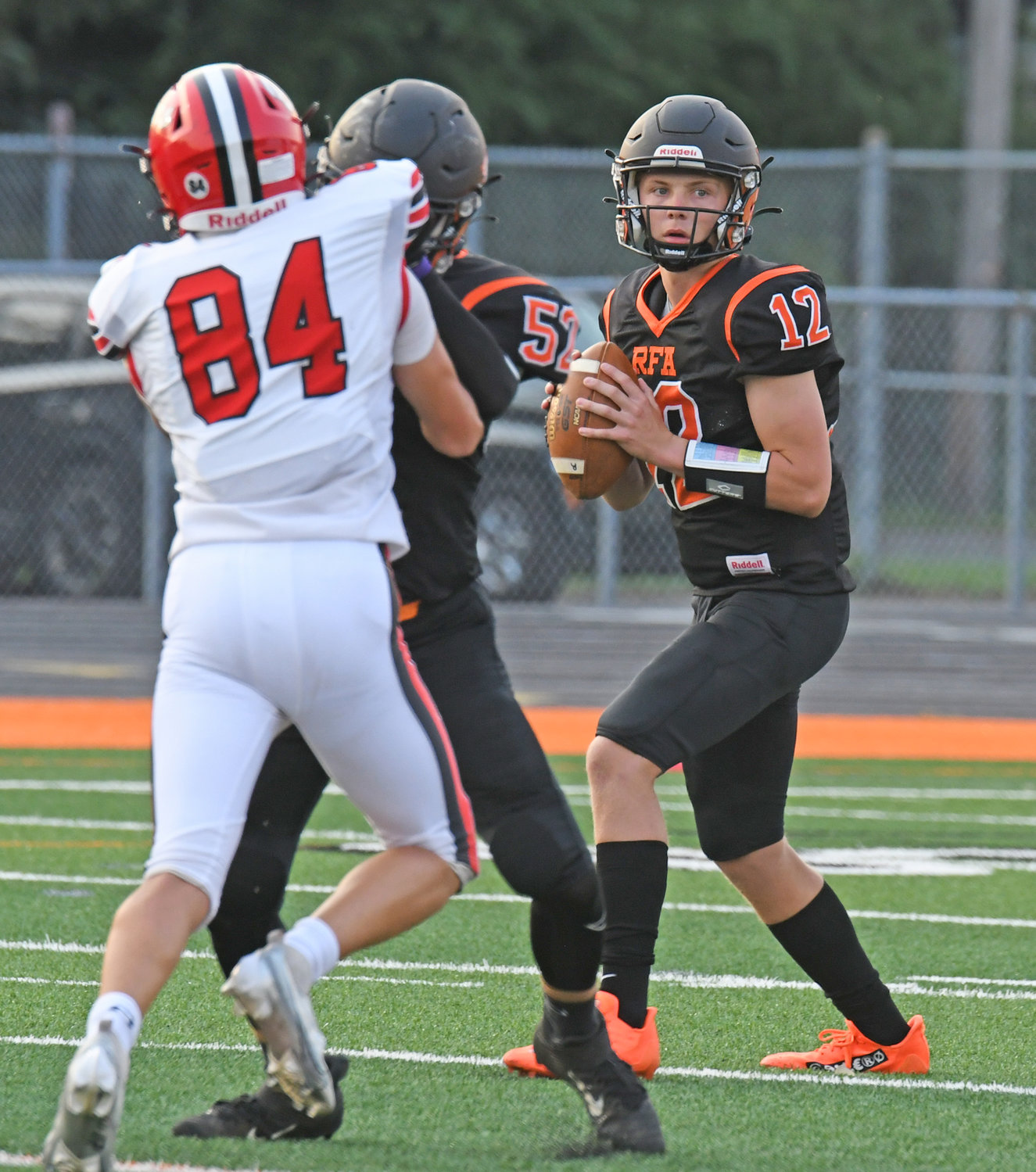 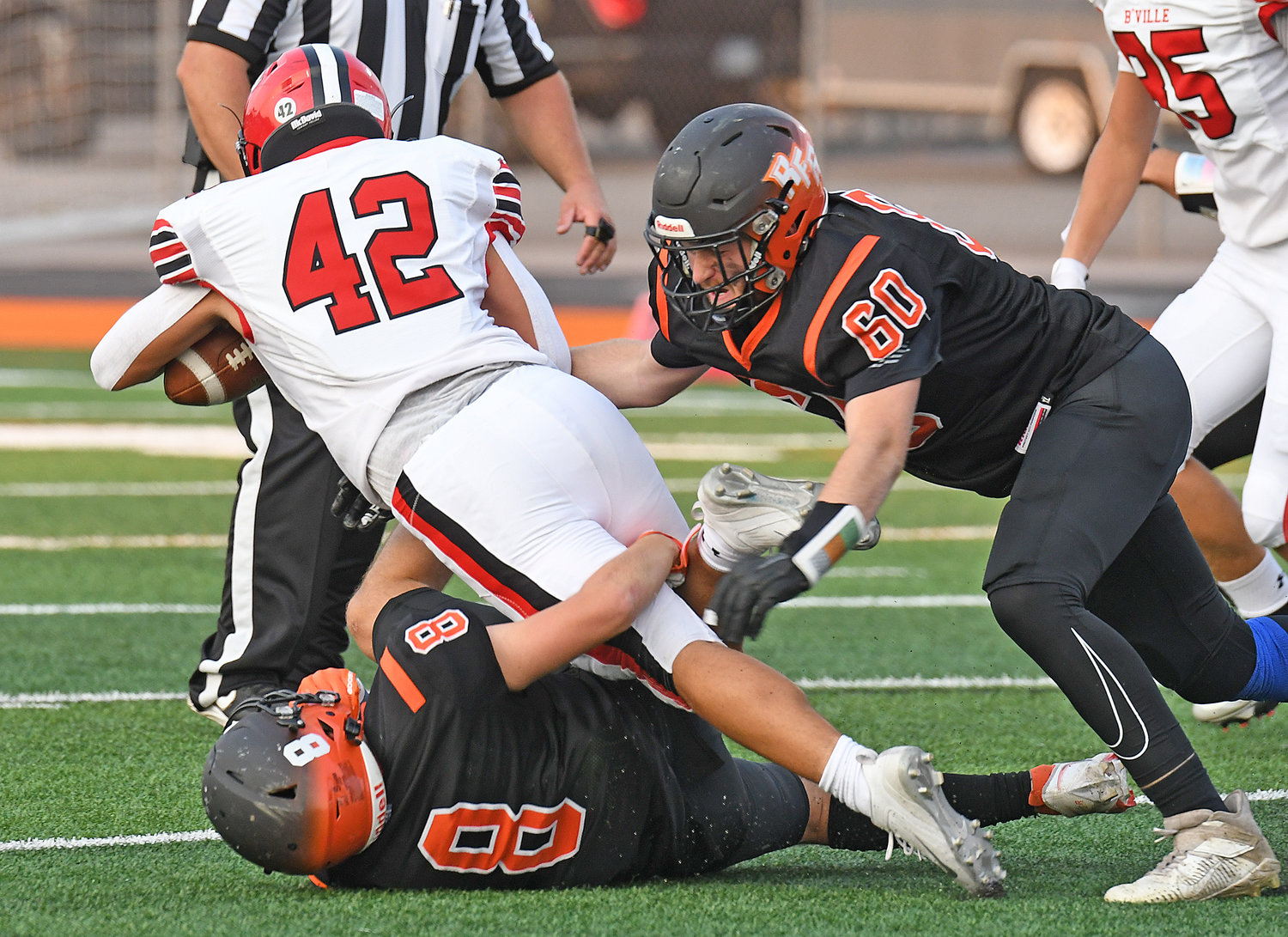 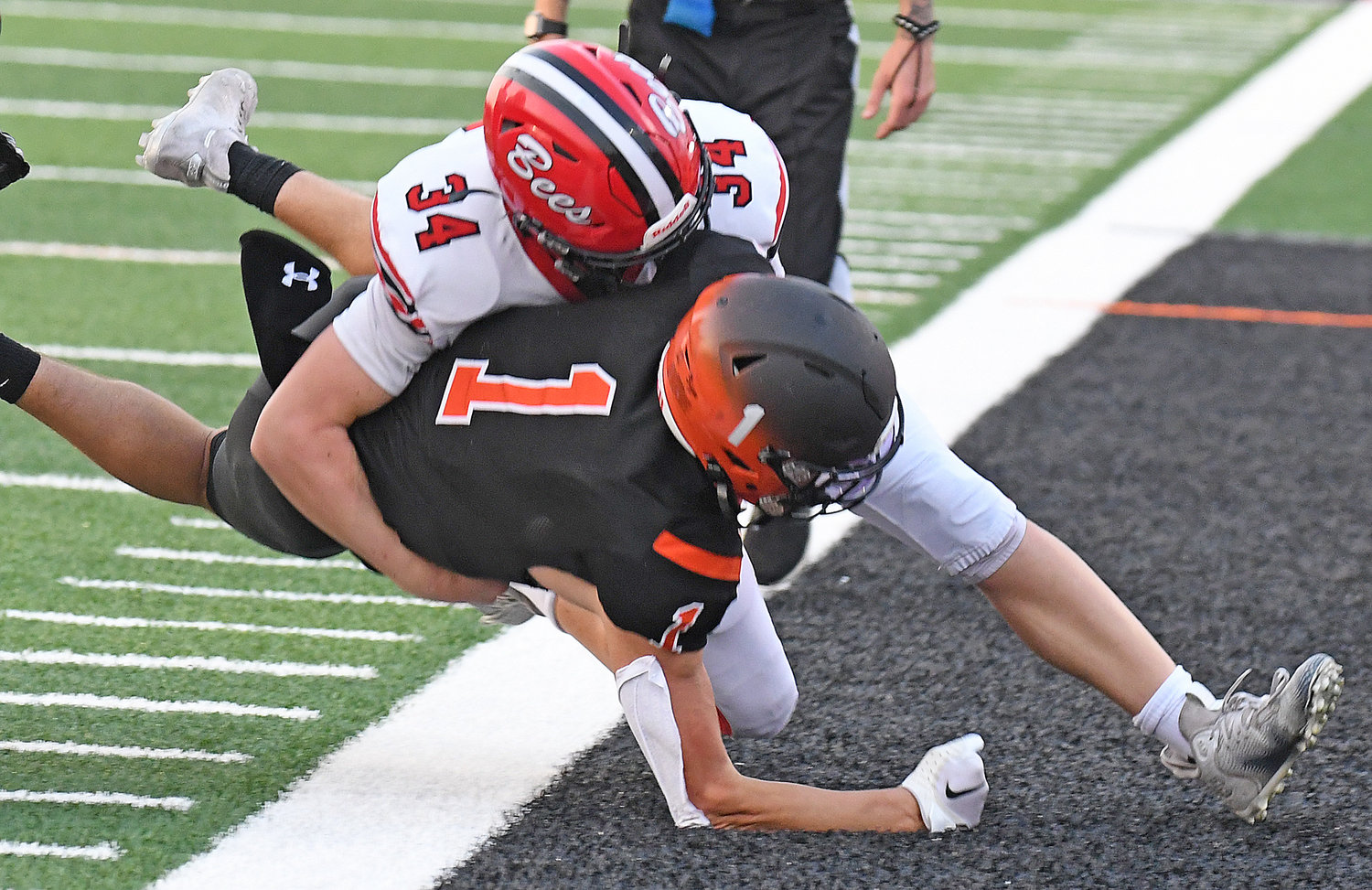 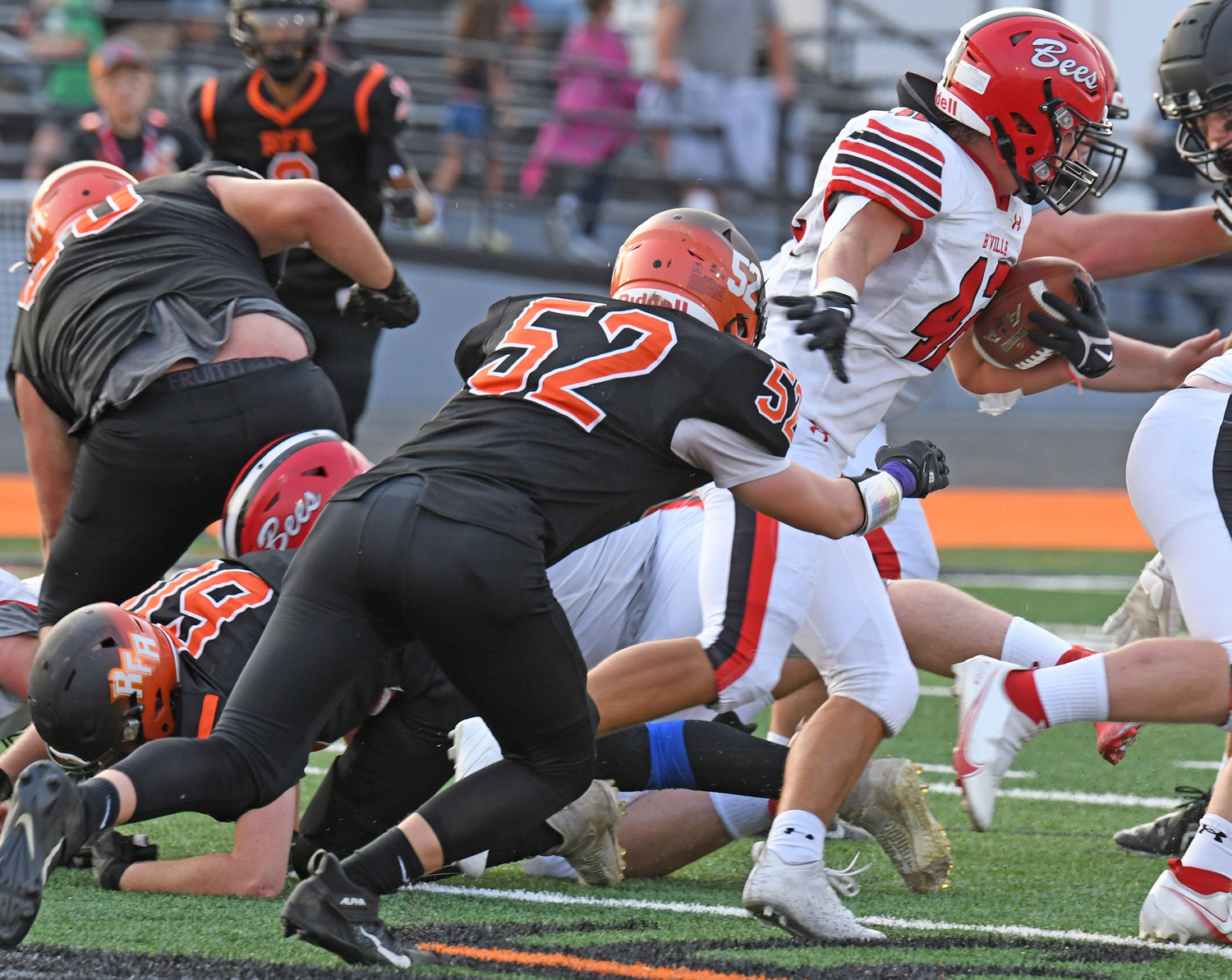 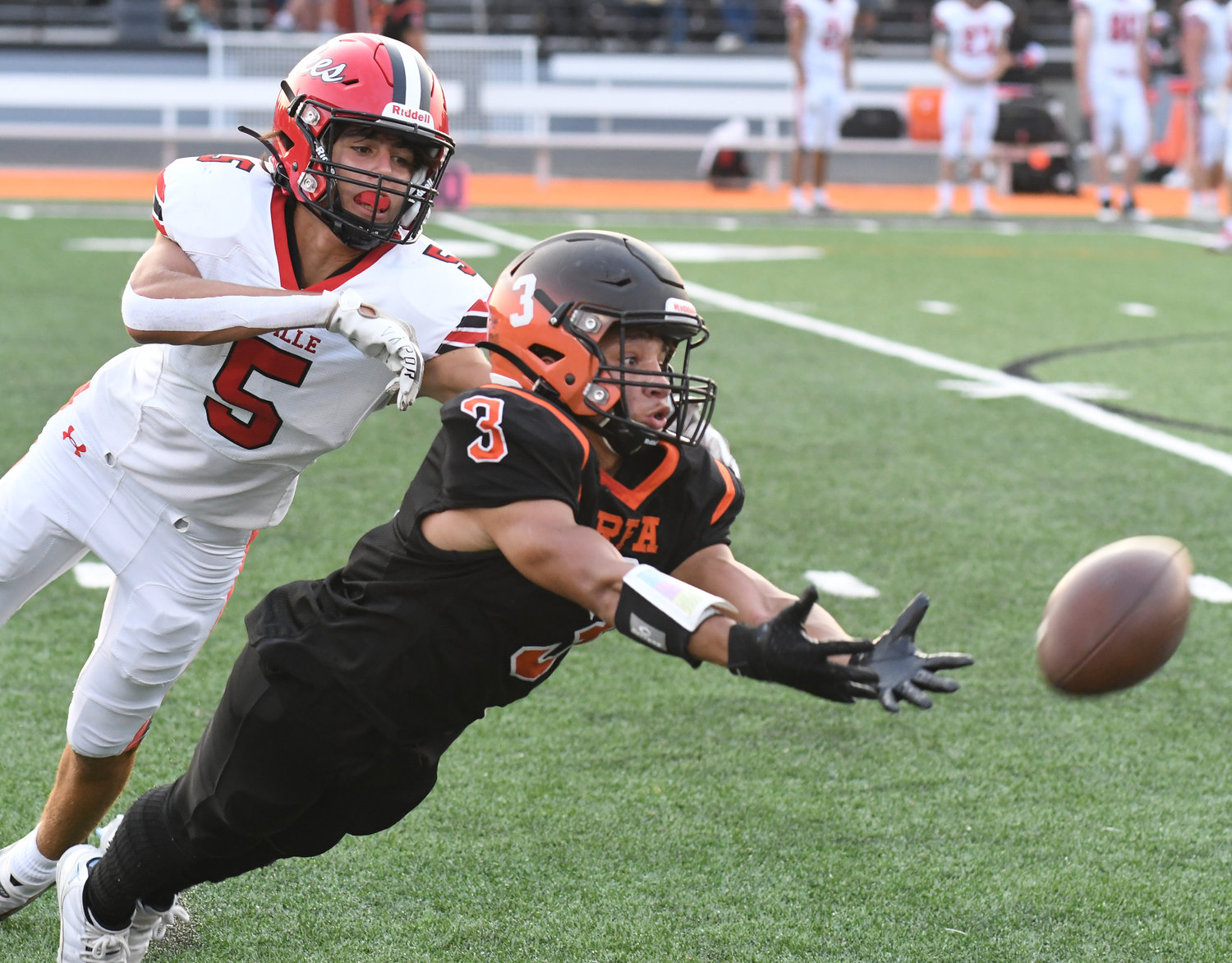 ROME — The Baldwinsville defense stifled Rome Free Academy’s offense and the Bees’ running attack was sharp in the team’s first game of the season. It was a 55-13 win for the visiting Bees at RFA Stadium Friday night in Class AA football action.

Brandon Levin was the offensive star for Baldwinsville in the first half, running 10 times for 125 yards and three scores. The team built a 35-0 first half lead. Also scoring a rushing TD each were quarterback Gregory Marinelli (70 yards) and Anthony Noda (27 yards).

Levin's first score was a 46-yard run straight through the heart of the Black Knights' defense on the team's first drive of the season. On the second drive, he went 26 yards to pay dirt. His 20-yard TD carry was the last score of the first half. He started the second half scoring on a 60-yard run.

In total he stacked up 185 yards on 12 carries with the four scores. Noda scored two second half touchdowns for three on the night.

Carl Sanfilippo, the longtime Bees' head coach, said the team was trying to get a look at a group of three new running backs in its first game. "We wanted to get our feet under us, establish ourselves." Now the team must analyze the performances and see how the offense evolves.

"I think Rome has a good team," he said, but the Bees were too big up front and the running game came together.

RFA's two touchdowns were second half pass plays. The first made it 42-6 when Evan Carlson-Stephenson hit Jack Lawless from 15 yards out. Later, he threw a short pass to Lebron Bowman, who broke a tackle near the first down marker then got into the open field and went a total of 66 yards. That put the score at 42-13.

Carlson-Stephenson ended the night 18-for-32 for 192 yards passing, two TDs and an interception. He also ran five times for 25 yards, which was a team high.

Bowman caught four passes for 80 yards and the score. Lawless had four catches for 33 yards and a TD. Ricky Fernandez had six catches for 61 yards.

"It's hard when some offensive linemen have 100 pounds on you," said RFA head coach Jake DerCola of the tough assignments for the undersized defense. The RFA defense wants to exploit offenses with its speed, he said, but the Bees didn't allow it. "We're there but we're not completing the play," not quite being in the exactly the right place or hestitating at the point of attack.

As for an offensive game plan, he said, "It was hard this week." Baldwinsville didn't play last week, so "We only had their scrimmage film." And that was little help because the Bees played against Elmira, and that offense had virtually no passing game. Friday, the Bees used many formations and disguised coverages, he said.

Despite that, for the second week in a row, the undersized RFA offensive line did give Carlson-Stephenson time to pass. The challenge was creating room to run, with Sal Martelli limited to just eight yards rushing as the team's primary ball carrier. "For the most part we do pretty good with pass protect," DerCola said. Carlson-Stephenson, he noted, helps himself with a quick release and the ability to scramble.

RFA falls to 0-2 on the season and will travel to Class AA opponent Henninger for a 6 p.m. game Friday, Sept. 16.