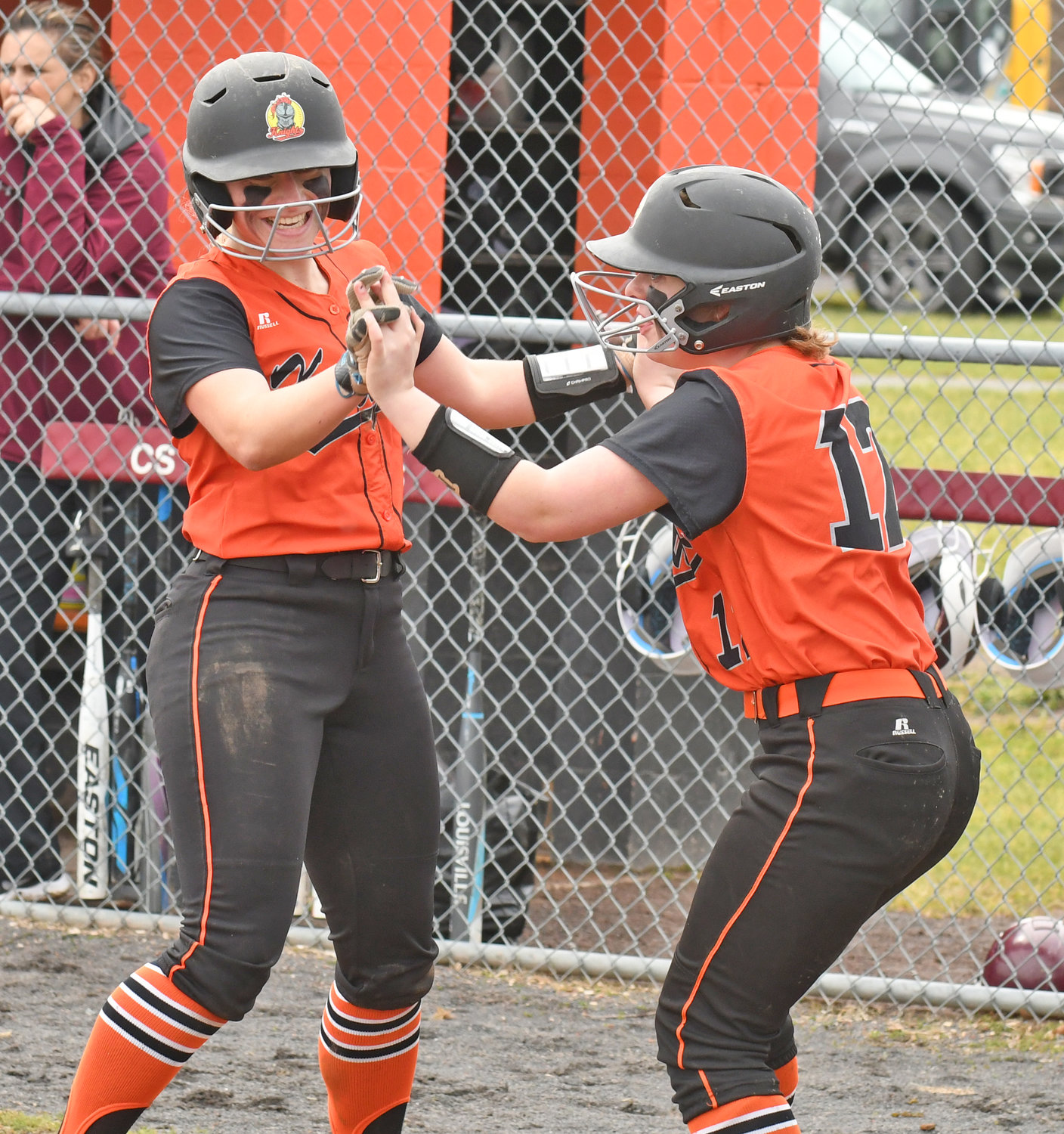 BACK IN ACTION — Rome Free Academy seniors Lauren Dorfman, left, and Laina Beer celebrate the first run scored in the first inning against Central Square Saturday. Dorfman tripled in her first at-bat after missing all of last season due to injury, then came in to score on a single by Maggie Closinski. The Black Knights opened the season with an 8-0 non-league win.
(Sentinel photo by John Clifford) 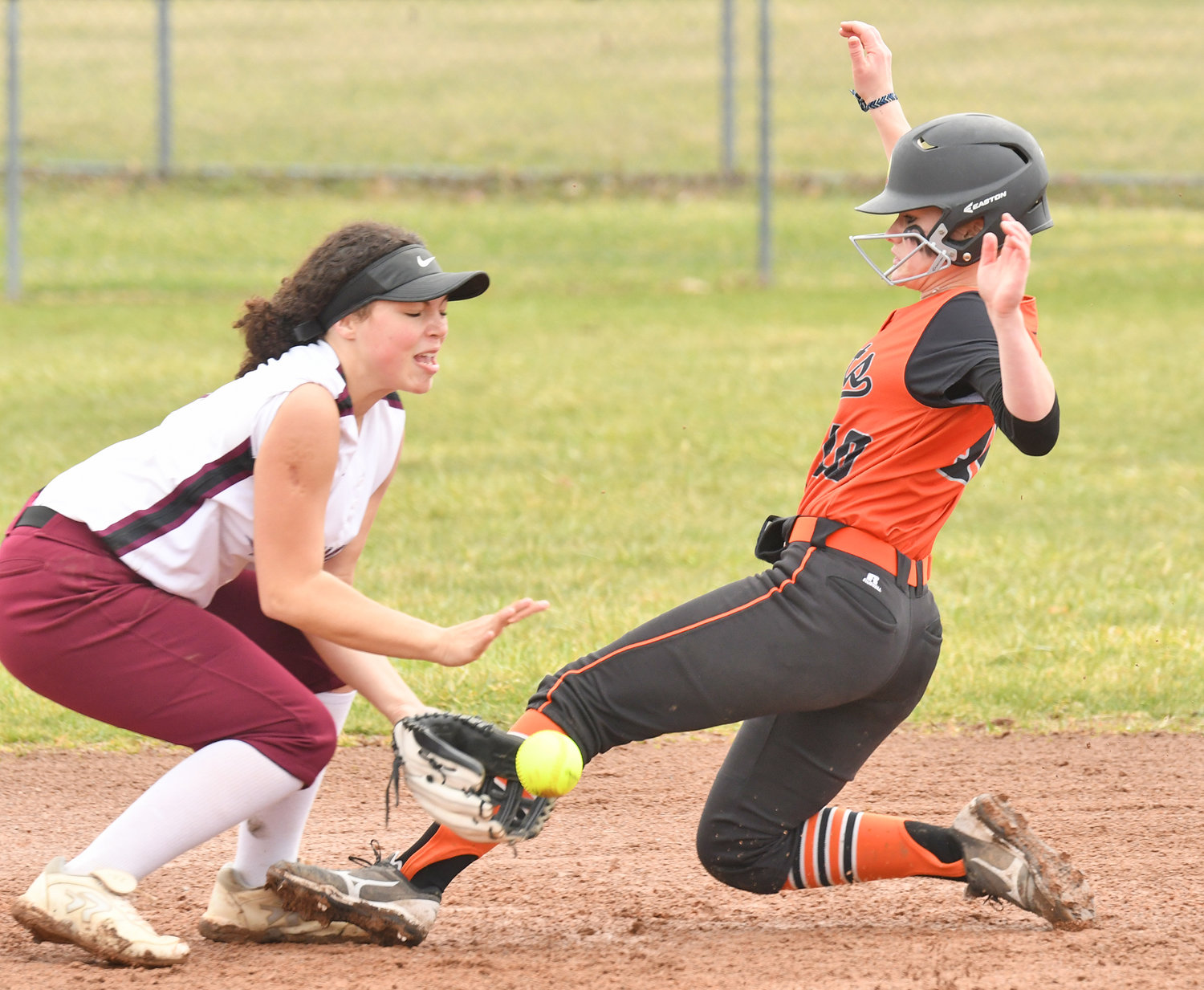 SAFE AT SECOND — Rome Free Academy senior Maggie Closinski slides in to second with Central Square shortstop Carley Cinquemani taking the throw. Closinski was safe on the play and would score later in the first inning of the Black Knights’ 8-0 win to open the season at home at Kost Field.
(Sentinel photo by John Clifford) 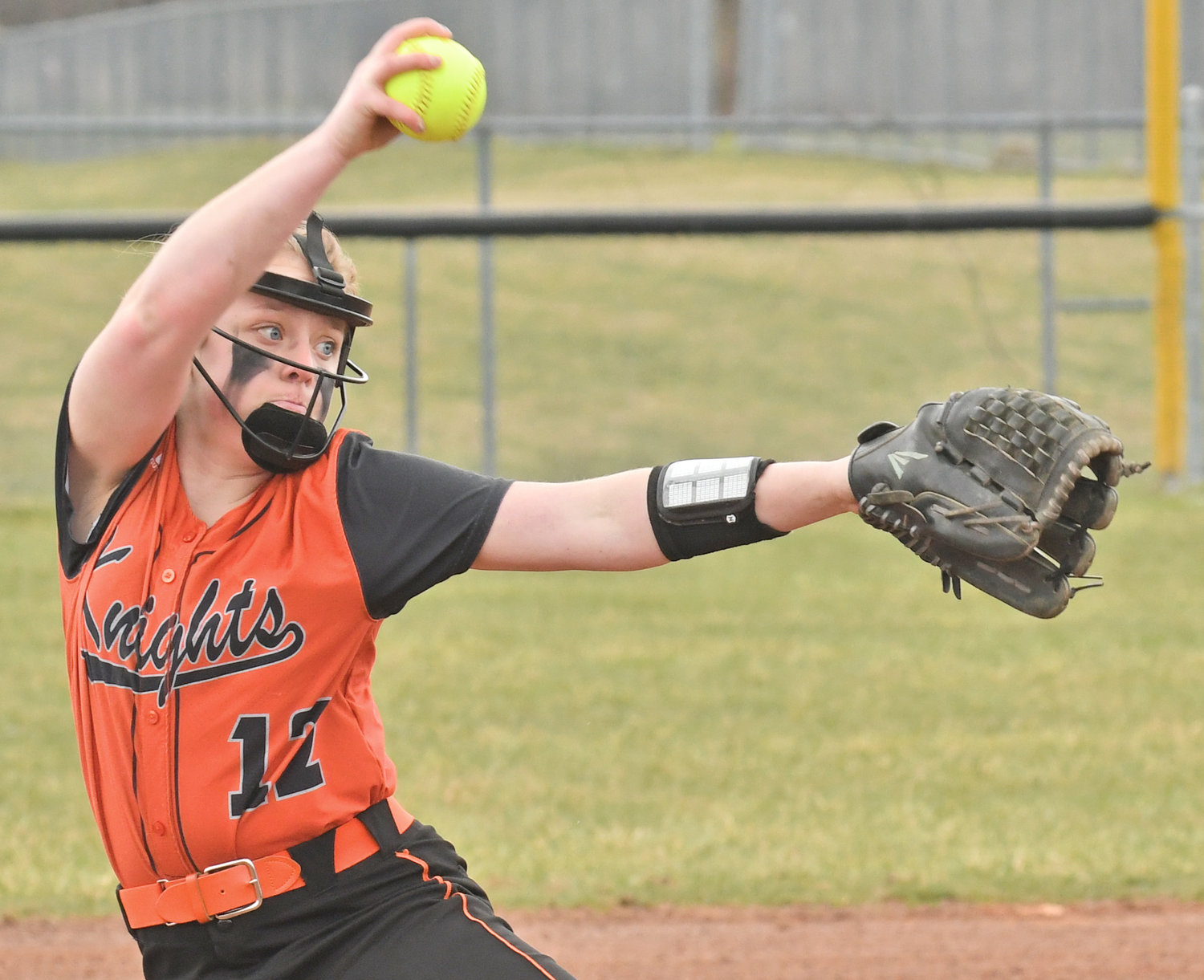 LET IT RIP — Rome Free Academy senior pitcher Laina Beers delivers a pitch in the first inning Saturday at Kost Field against Central Square. She threw a six-inning complete game and earned an 8-0 win. She struck out eight and allowed a hit and two walks.
(Sentinel photo by John Clifford) 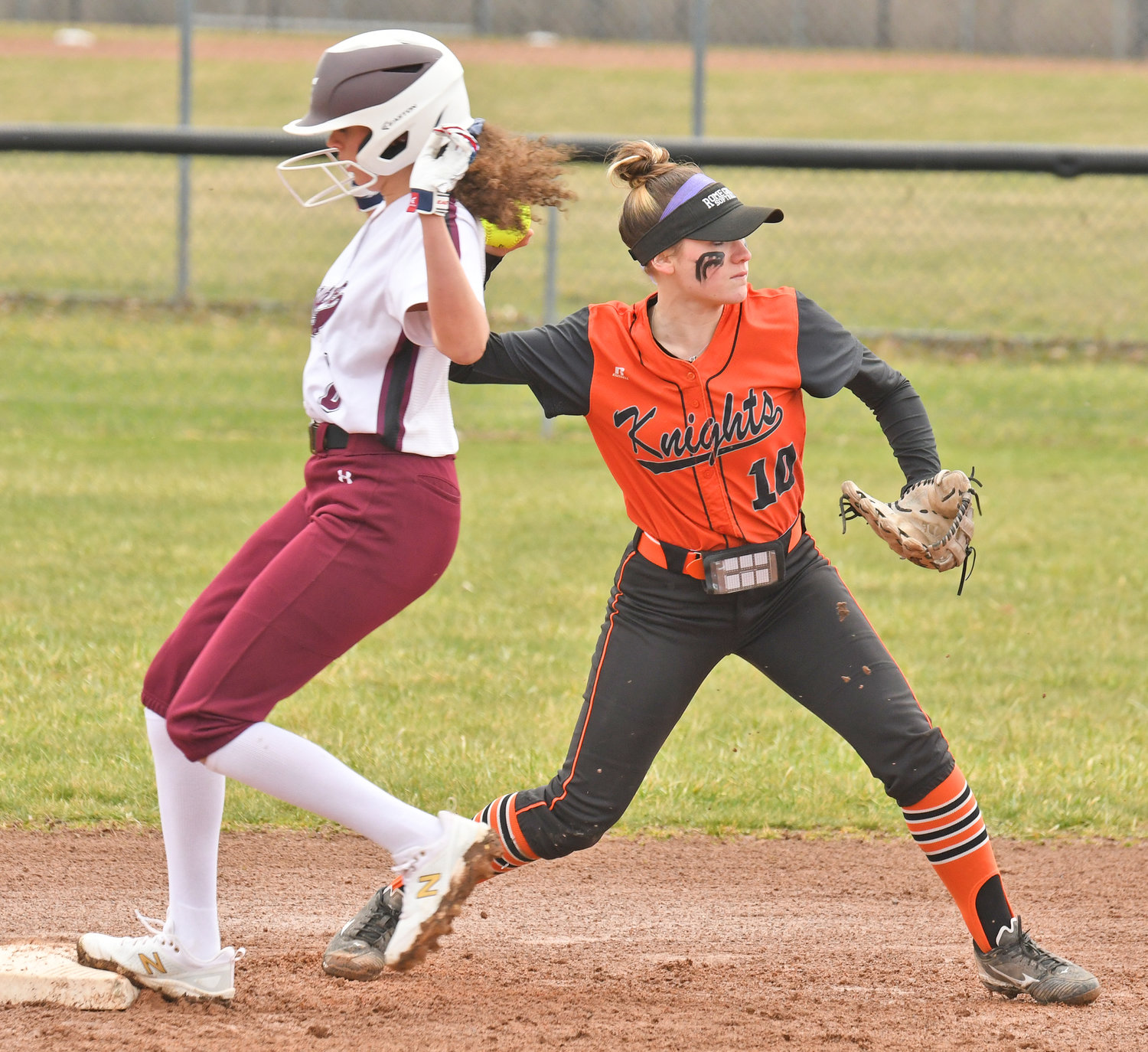 The Rome Free Academy softball team opened the season with a well-rounded win, 8-0 at home over Central Square Saturday.

“That’s how we play,” said second year RFA head coach Jerry Closinski. “Hopefully we can continue to put runs on the board.”

Lauren Dorfman missed the entire 2021 season due to injury but she made her presence felt immediately and often in the weekend win. She tripled in the team’s first at-bat of the season then came around to score on a single by Maggie Closinski. After she stole second base, she came around to score on an RBI triple by Adrianna Varano. She crossed the plate on a dropped third strike when she raced home on the throw to first. That put the Black Knights up 3-0, which was plenty for pitcher Laina Beer.

The Knights added a run in the second when Shea Larkin led off with a walk, moved over on a pair of bunts then came home on a passed ball. Alexis Thompson’s RBI groundout in the third drove in Varano. That made it 5-0.

In the first, Beer and Kennedy Campbell each singled and both came home on a double by Kate Platis in her first varsity plate appearance. She came home on an RBI single by Dorfman that put RFA up 8-0.

“We can hit the ball out but that’s what we’re going to be — gap to gap,” the RFA coach said.

The game was called early when in the bottom of the sixth Thompson fouled a ball off the throwing arm of Central Square catcher Jailynn Patchen. The Central Square coach called her team off the field when Patchen had to come out of the game.

“Laina threw the ball well and got ahead,” coach Closinski said. With Beer retiring eight batters over six innings, that was a third of the outs without the defense having to field the ball, he noted. “You haven’t seen the best of her.” Beer allowed one hit and walked two batters.

“I’m super excited to be back,” Dorfman said after the win in which she had a single, triple, stolen base, run and RBI. “I’m glad our hard work and effort has paid off,” including in the off-season. “I was a little rusty but it was a good game to get back out there.”

Dorfman, who was the team’s catcher in the game, said she liked what she saw from Beer in the circle. She hit her spots when we asked her to. She pulls through when we need her most.”

Dorfman said the team has to keep “thinking positive” and get “out of our heads. Get up to the plate thinking: ‘I can crush this ball.’”

RFA has another non-league game Tuesday, when the Knights travel to Liverpool for a 5 p.m. start.

Ella Trinkhaus went 3-for-5 with a double and 5 RBIs and also struck out eight and allowed one earned run in seven innings to help Notre Dame earn a 15-3 win over Oriskany on Monday.

It was the third complete game for Trinkhaus, who had 18 strikeouts in a win over Proctor last Wednesday.

The Jugglers are scheduled to play visiting Vernon-Verona-Sherrill at 4:30 p.m. Tuesday.

No stats were available for Oriskany, which led 3-1 after two innings.

Oriskany (1-2) is next scheduled to play April 20 at Morrisville-Eaton.

The Thomas R. Proctor High School boys lacrosse came up short for the third time in five days on Monday.

Chittenango scored 10 first-quarter goals en route to a 20-0 win over host Proctor during the afternoon contest.

Conner Meeks-Vaughn totaled eight goals and four assists and Brendon Barnard finished with six goals and seven assists for Chittenango, which is 1-1. The team is scheduled to play at Jordan-Eldbridge at 4:30 p.m. Tuesday.

Iverson Hahn and Earl Lang each totaled four saves for Proctor (0-5), which had a 7-5 setback Saturday against Peekskill.

Utica is next scheduled to play at 4:30 p.m. Thursday at Vernon-Verona-Sherill.

The Whitesboro boys lacrosse trailed by two at halftime, but Marcellus pulled away in the second half Saturday for a 21-10 win.

Whitesboro had an 11-9 halftime deficit but Marcellus outscored the Warriors 10-1 in the next two quarters to take the non-league win.

The team is next scheduled to play at 5 p.m. Thursday in a non-league game against Holland Patent.

Marcellus (3-1) was paced by Adam Rayfield, who had 10 goals and five assists.