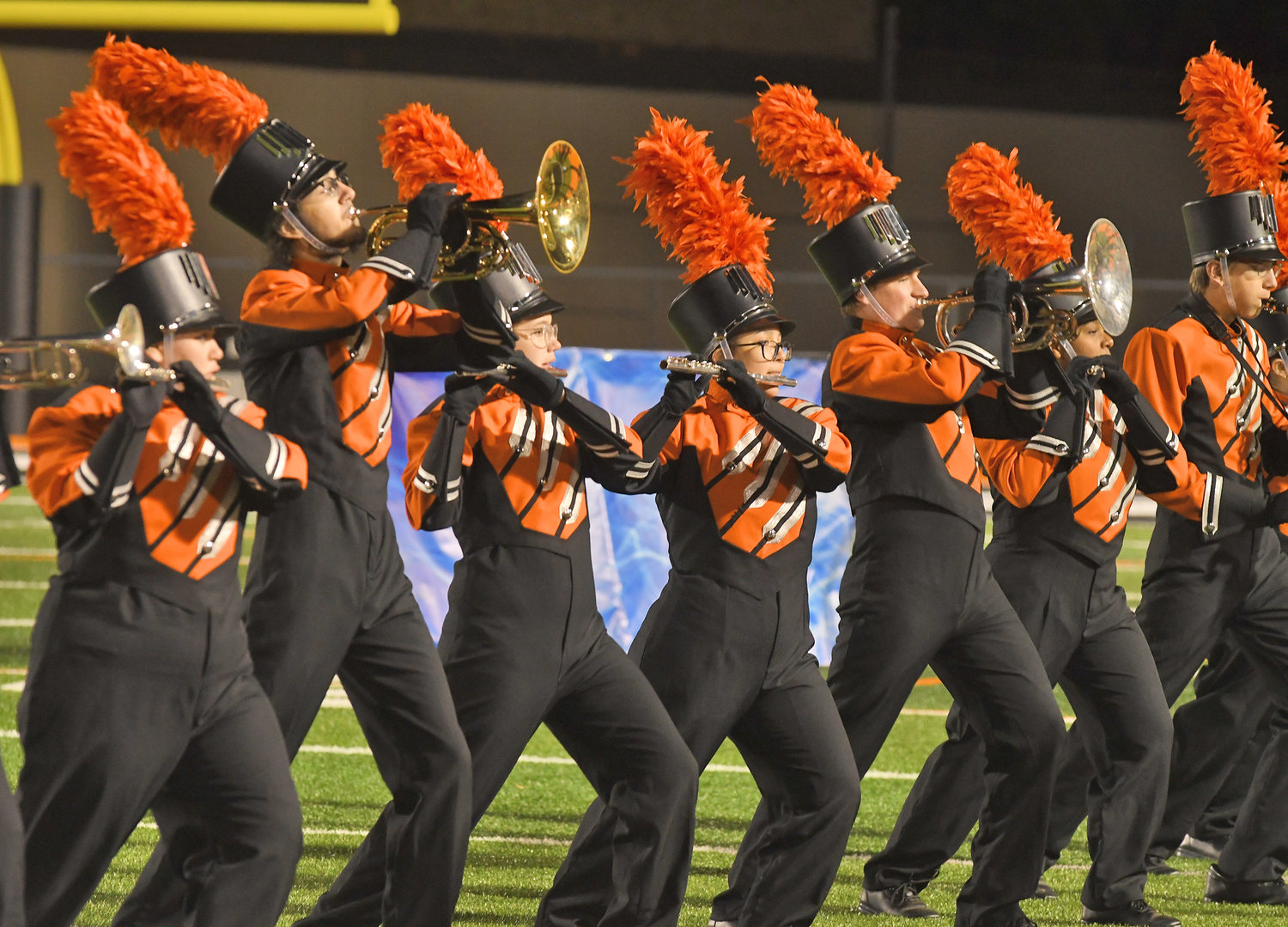 ON TO THE DOME — Rome Free Academy Marching Band members perform in unison during their “Colors of Fire” Community Show at RFA Stadium on Wednesday night. The band will perform the show again in the Large School Division 2 competition at the New York State Field Band State Championships on Sunday at the Carrier Dome.
(Sentinel photo by John Clifford) 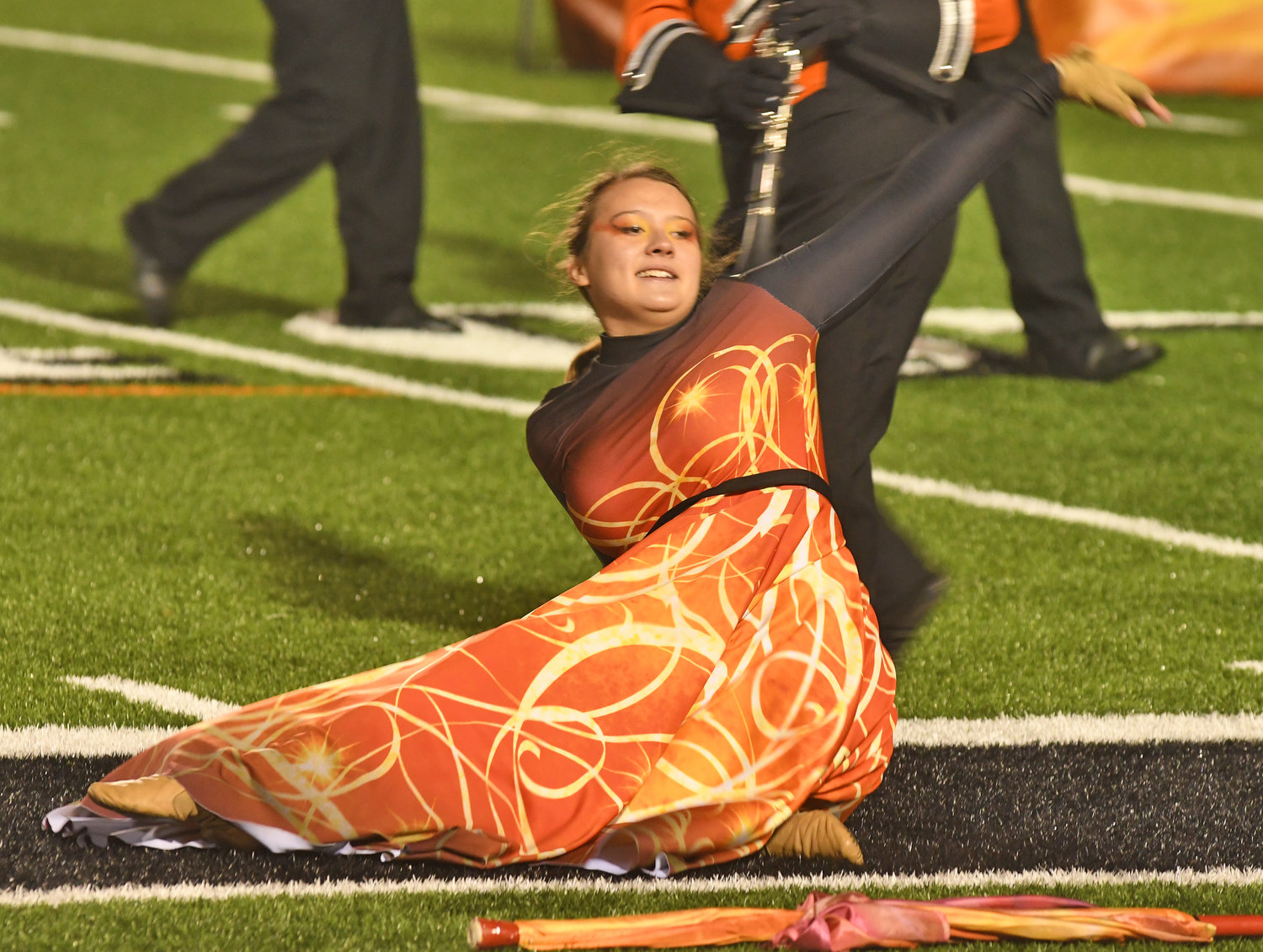 ON FIRE — The RFA Marching band delivered a striking performance on Wednesday night at RFA Stadium. Above, Colorguard member Karabrie Wiggins strikes a pose during the band’s performance of “Color of Fire.” 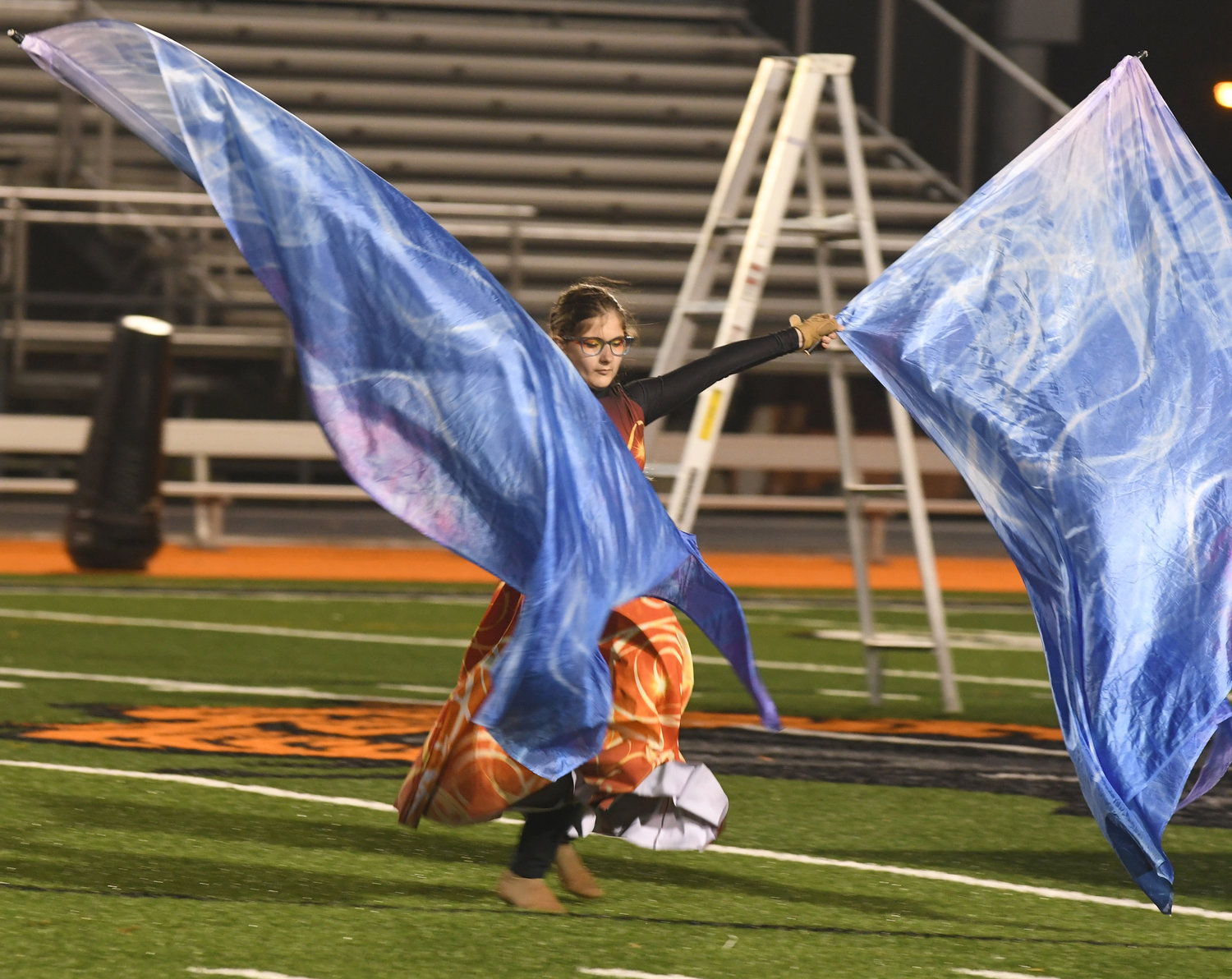 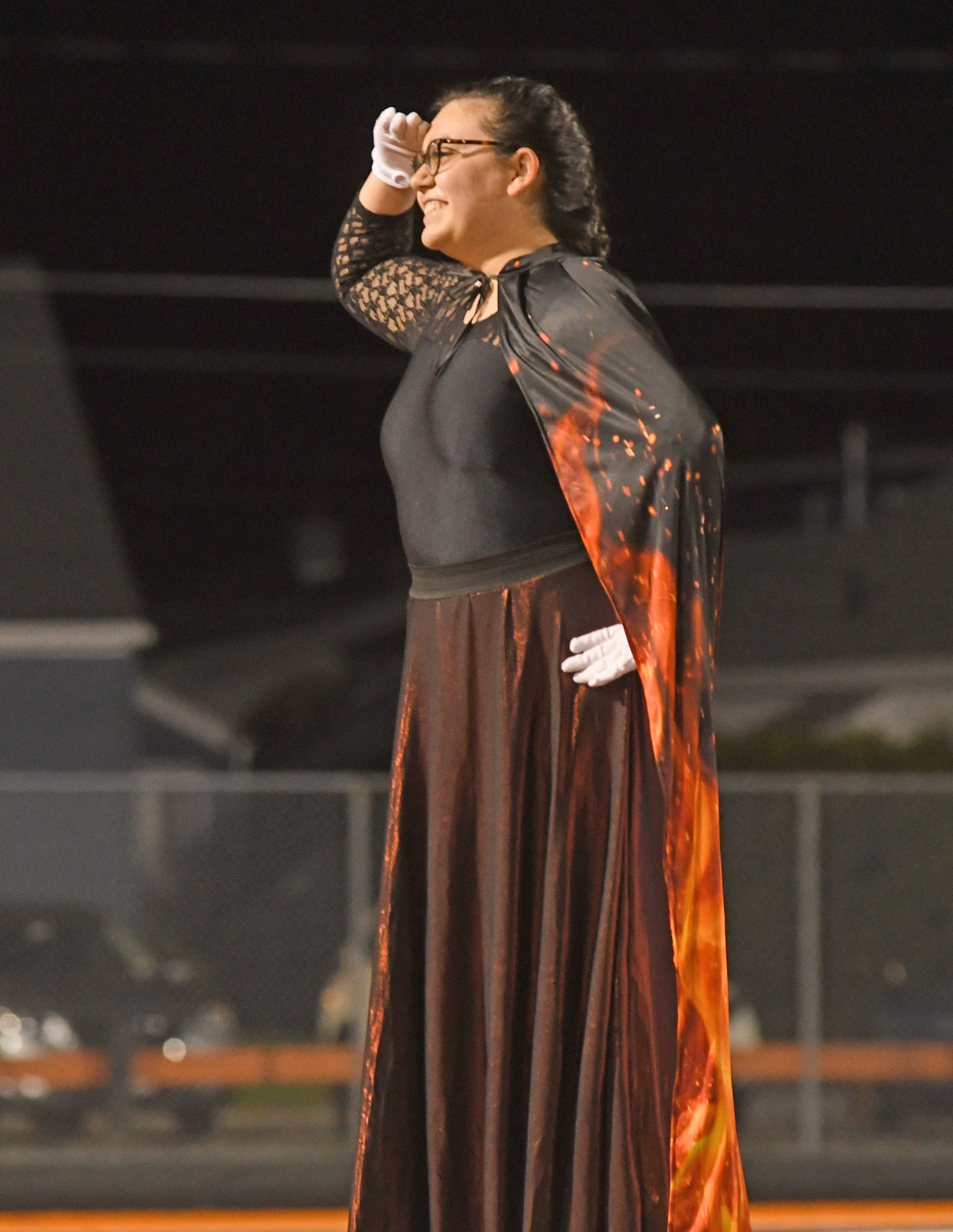 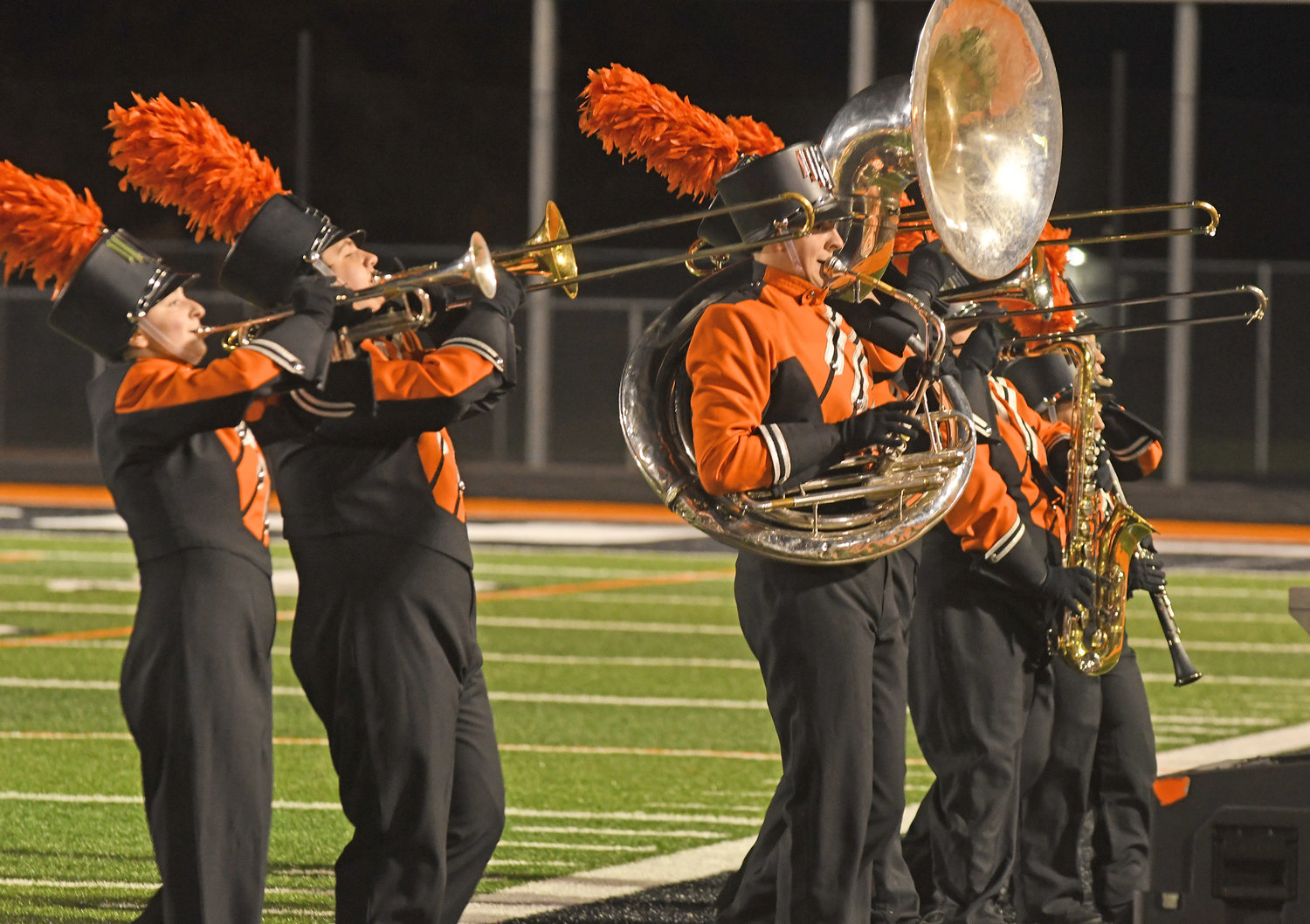 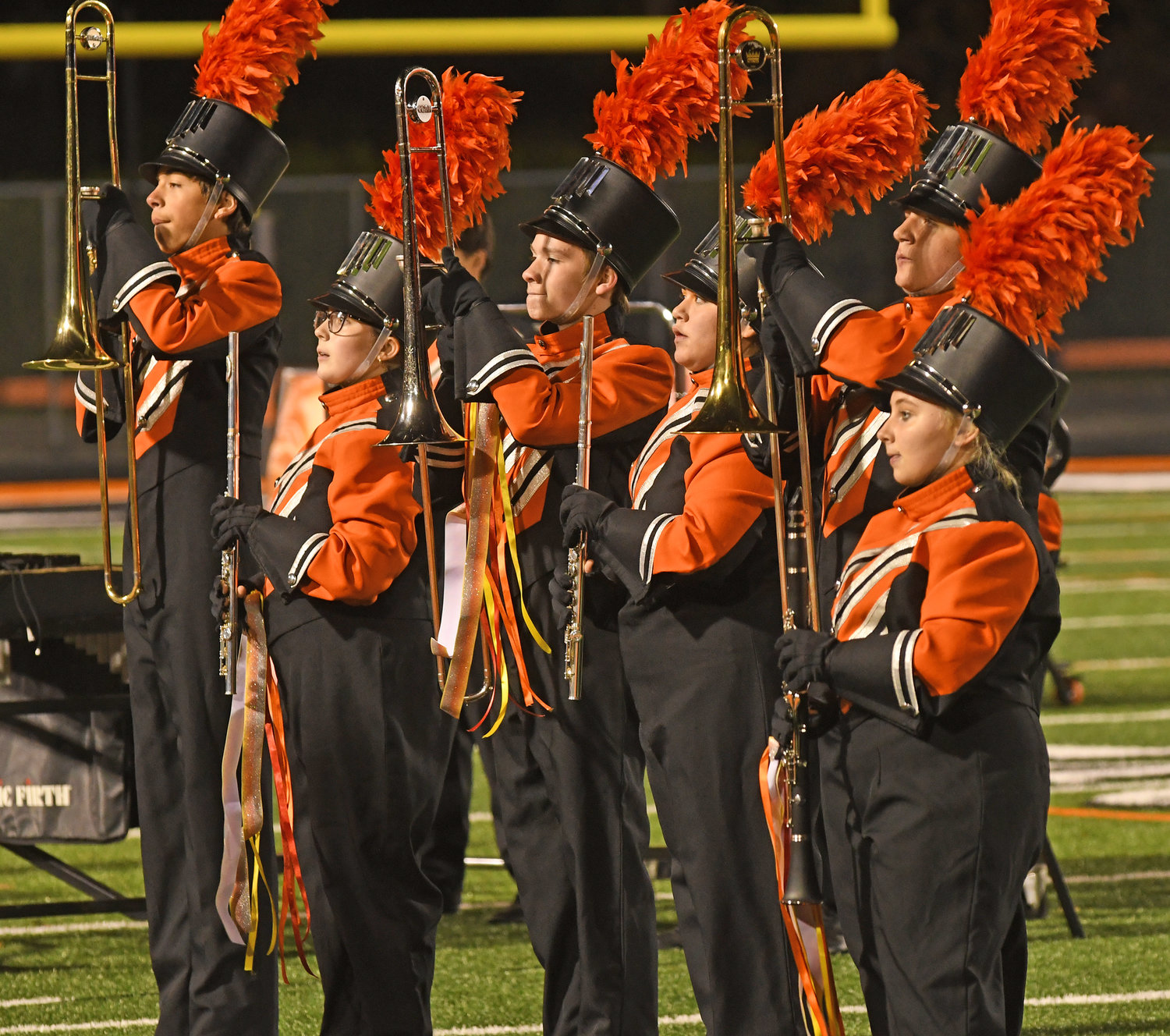 ON TO THE DOME — Rome Free Academy Marching Band members stand at attention at the end of their performance of "Colors of Fire" at Wednesday's Community Show at RFA Stadium. The band will perform the show during competition in the Large School Division 2 field at the New York State Field Band State Championships on Sunday at the Carrier Dome.
(Sentinel photo by John Clifford) 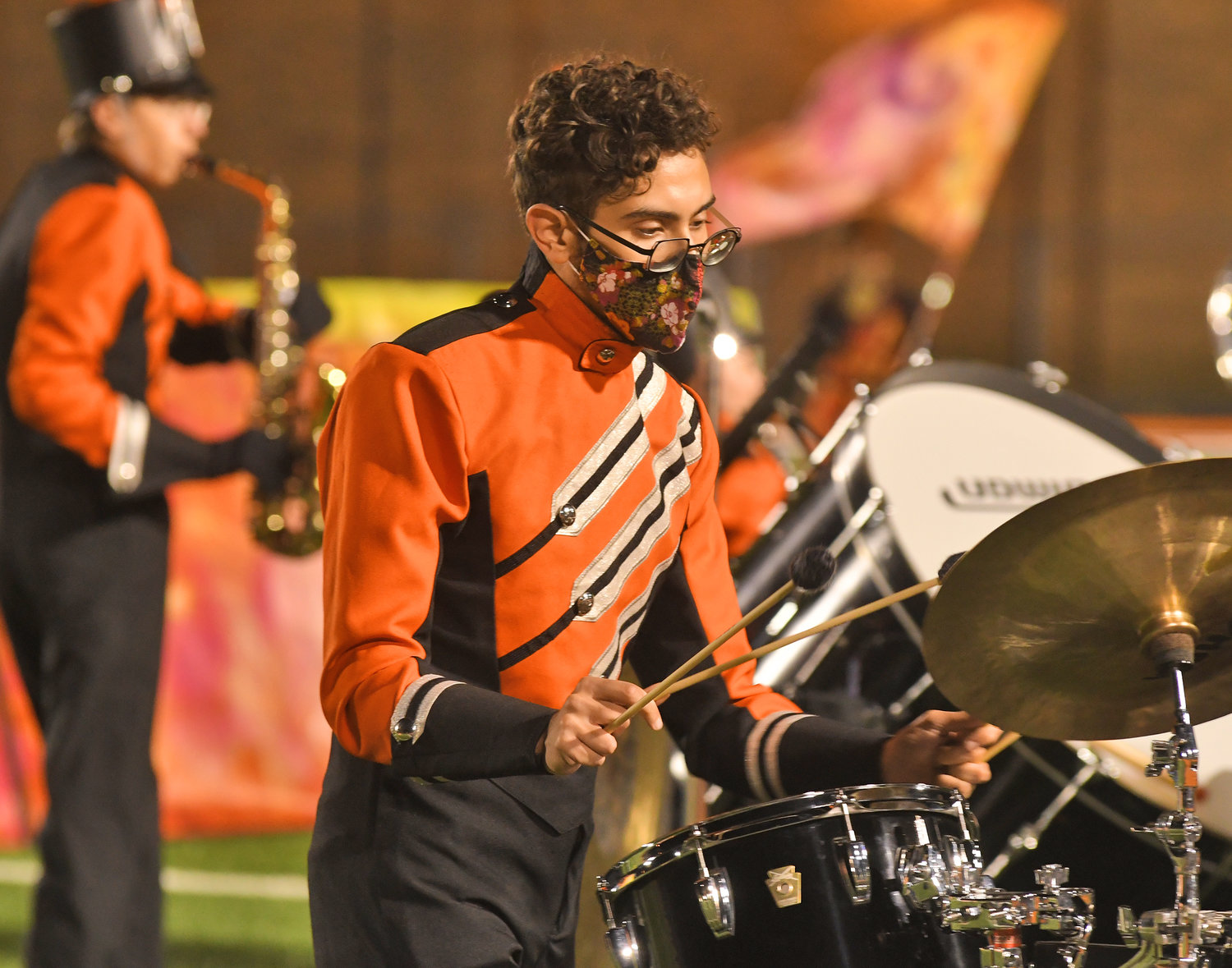 And the band played on.

Too much rain had made way for a calm, clear sky this Wednesday night, where the stars shone especially bright over Rome’s beloved Rome Free Academy Stadium. The RFA Marching Band stood poised this night to resume its tradition of hosting “The Community Show,” where — just before they embark on their “Day at the Dome” to compete in the New York State Field Band State Championship competition at the Carrier Dome at Syracuse University — they gather at RFA Stadium, in full regalia.

All were welcome, free of charge, to celebrate the symphony and spectacle presented. The band honored its seniors and then performed the full program they have prepared for the state competition. This year, the “Pride of the Knights” celebrates a decade of “Marching Band” tradition at RFA.

Students attending school in the district can join Marching Band as early as seventh-grade. According to Color Guard Director, Lindsay Mogle, who has worked with the band since its inception in 2011, COVID cost the program essentially two years of recruiting, as experienced members graduated over the past two years, while new members could not join and begin the work of learning a flag or a drum or an instrument.

This summer, Stephen “Steve” Russell, a native upstate New Yorker, took the helm of the RFA Marching Band as its new director, rising into a season where the fate was unknown. Russell, Mogle and long time music department leader, Jake Meiss, labored to motivate students to come out for summer rehearsals, to join marching band, no experience required. It was a labor of love of music to simply refuse to let the program be another victim of the COVID pandemic.

Fast forward to Wednesday. Although there were not 100 students taking he field, wearing the bold and bright marching band uniforms complete with buttons up their front and feathers on their caps; about 25 students did. And that was enough. After the challenges faced by the high school students of the Mohawk Valley – same or similar to those faced by their peers all over the world – that was more than enough.

Dozens of family, friends, classmates, neighbors — and several RFA Marching Band alumni no longer eligible to perform but still part of the unit’s extended family — gathered in the grandstands to celebrate the RFA Marching Band.

The program began with a cohort of members performing the National Anthem and the Rome Free Academy Alma Mater. The eight seniors were then honored; RFA Marching Band members of the Class of 2022. Called one by one, each senior was introduced, noting their years on the Marching Band, their contribution to other RFA performing arts programs, their other activities and honors and their future plans.

Their families were announced and accompanied them past a receiving line of Marching Band and RFA performing arts leaders who had known and mentored them through their high school years, to then pose together with their families in front of thoughtfully prepared backdrops reflecting the theme of their signature season and competition performance: “Colors of Fire.”

The honors and accolades boasted by this set of seniors was applause-worthy at every pause. Some had participated in Marching Band since Middle school, several were member of the National Honor Society, some were poised to pursue pre-med programs in college, most counted student leadership and community service proudly among their extracurricular activities.

One expressed thanks in the comments pronounced from the broadcast booth to Russell for “picking up the pieces and putting the marching band back together” after a crushing “covid” year.

Fragapane was so inspired by her participation in RFA music and performing arts courses and extracurricular activities such as Marching Band, that she plans to attend SUNY Potsdam’s School of Music to double-major in music education and performance trumpet.

Swistak plans to attend post-secondary school in New York City, where he will pursue study in music performance and musical theatre.

Short expresses the message to her fellow seniors and bandmates that a highlight of her year will be to share her last “Dome” with them all – referring to the much-anticipated trip “west” to the State Championship competition, held perennially at the Carrier Dome.

The underclassmen were asked to join the seniors on the field, and the lights rose on the RFA Marching Band performance of this year’s program, “Colors of Fire,” a show featuring arrangements of the work of Gary P. Gilroy, Shawn Glyd and Nate Bourg. Like all symphonies, the performance shifted through three distinct movements, which represent the different colors of fire: red, blue and yellow. The finale featured a collision of those colors.

The theme was thoughtfully staged, with a blend of shifts in musical moods, together with wistful weaving in and around the musicians by the color guard, wearing dynamic, dress, flowing in the evening wind with their flags, flown and flung with artistry and intent. The student artists were well rehearsed, with purpose and passion in every step they took. As the performance concluded, they looked up … at that calm, clear sky over RFA Stadium, where the stars shone especially bright this night, as the community gathered rose to their feet in applause to celebrate them.

After the show, RFA junior Karabrie Wiggins expressed gratitude and praise for Mogle after enjoying her first year as a member of the RFA Marching Band. “Lindsay is amazing,” effused Wiggins, who touted her experience as one rich with lessons “on and off the field.”

“I think we’re going to peak at ‘Dome,’” said Wiggins of the upcoming trip to Syracuse University’s campus for the New York State Field Band championship competition this weekend. “We’re going to put on our best show yet.”

Mogle needed to say little to express her feelings after the show. She visibly glowed with pride. She spoke of the challenges of the year behind them, the doubts about whether a marching band could be fielded at all, as she looked out upon the students who fielded one, as they now celebrated the year behind them – and each other – and faced forward proudly toward “Dome” and what Wiggins predicted would be their “best show yet.”

Indeed, the RFA Marching Band was here this night. And, whatever the outcome, they will at “Dome” this Sunday, poised to compete at 2:30 p.m. in the Large School Division 2 field with eight other New York State high school marching bands. They will be “there,” too, representing RFA and Rome with pride.

A quote appeared in the program passed out to the community at “The Community Show” 2021 on the “Senior” page – just under the names of the class that saw Marching Band pause then resume again under their leadership.

It read: “Don’t wait for the stars to align, reach up and rearrange them the way you want … create your own constellation.” — Pharrell Williams

And so the RFA Marching Band plays on.