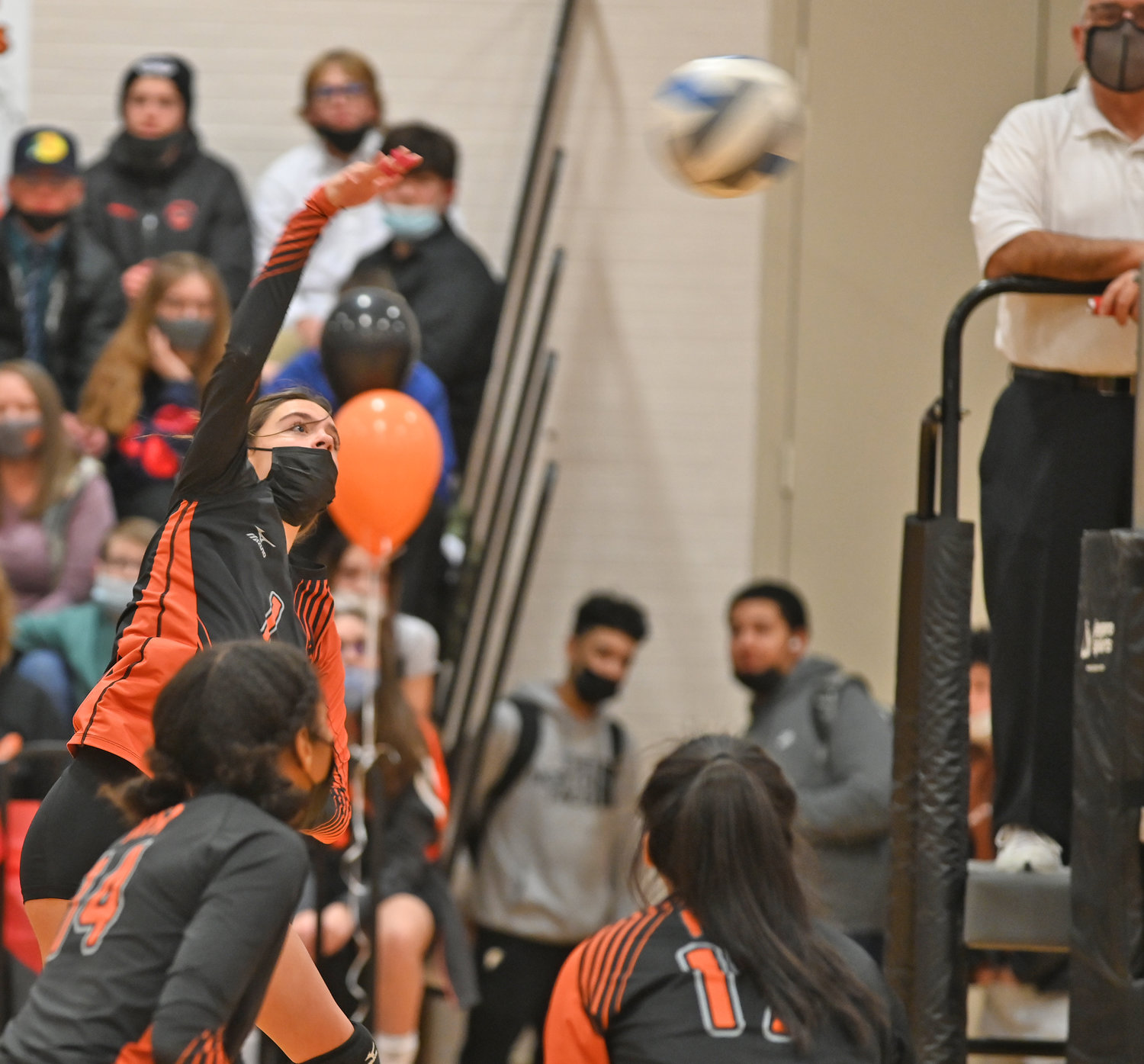 SPIKED — Rome Free Academy’s Chase Calandra muscles the ball back at Oneida in the Black Knights’ 3-0 win at home Monday night in the Tri-Valley League.
(Sentinel photo by John Clifford) 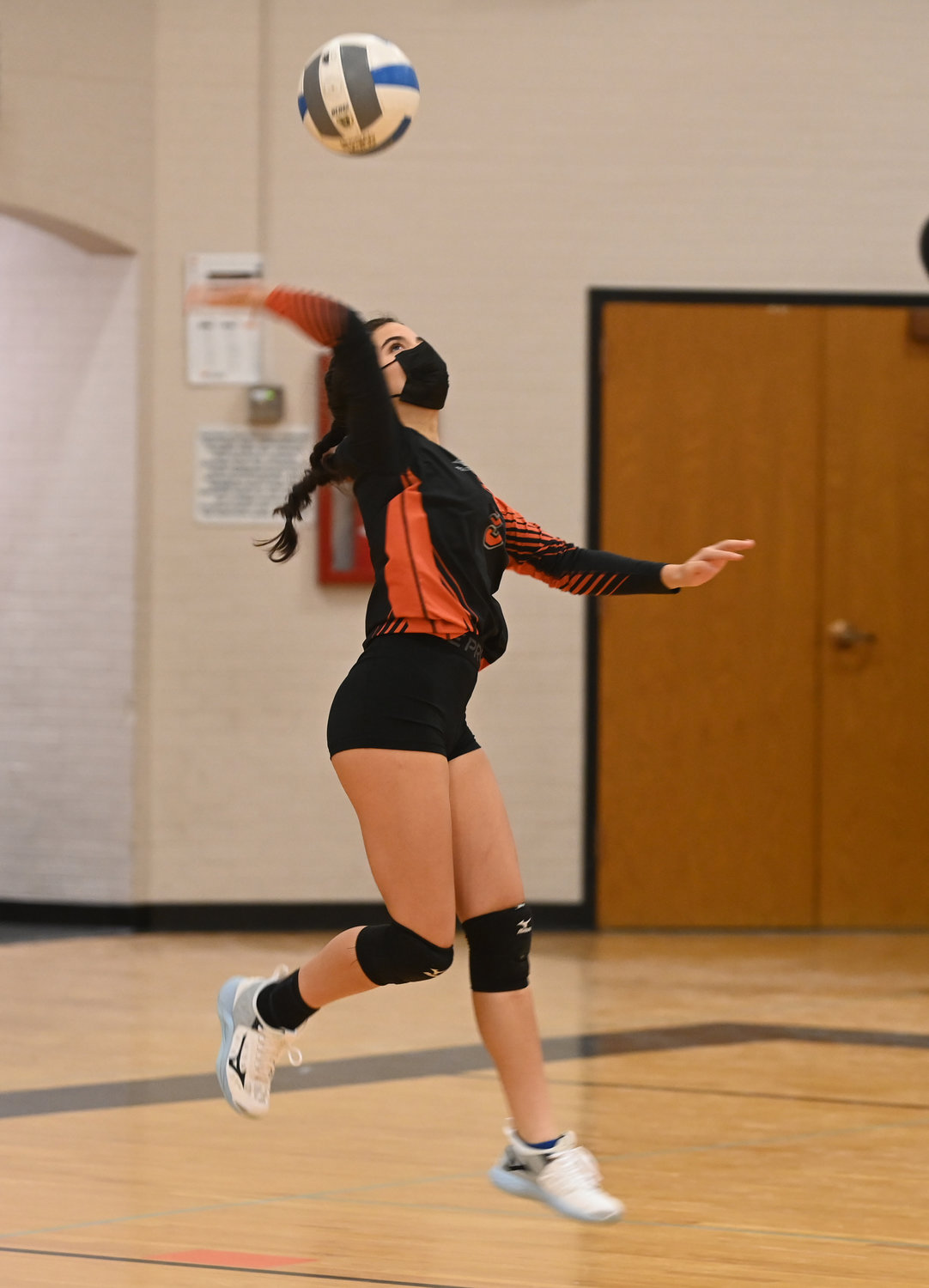 LOOKING FOR AN ACE — Jenavieve Cianfrocco of Rome Free Academy winds up for a serve against Oneida Monday night at home in the Tri-Valley League. match The Black Knights won 3-0.
(Sentinel photo by John Clifford) 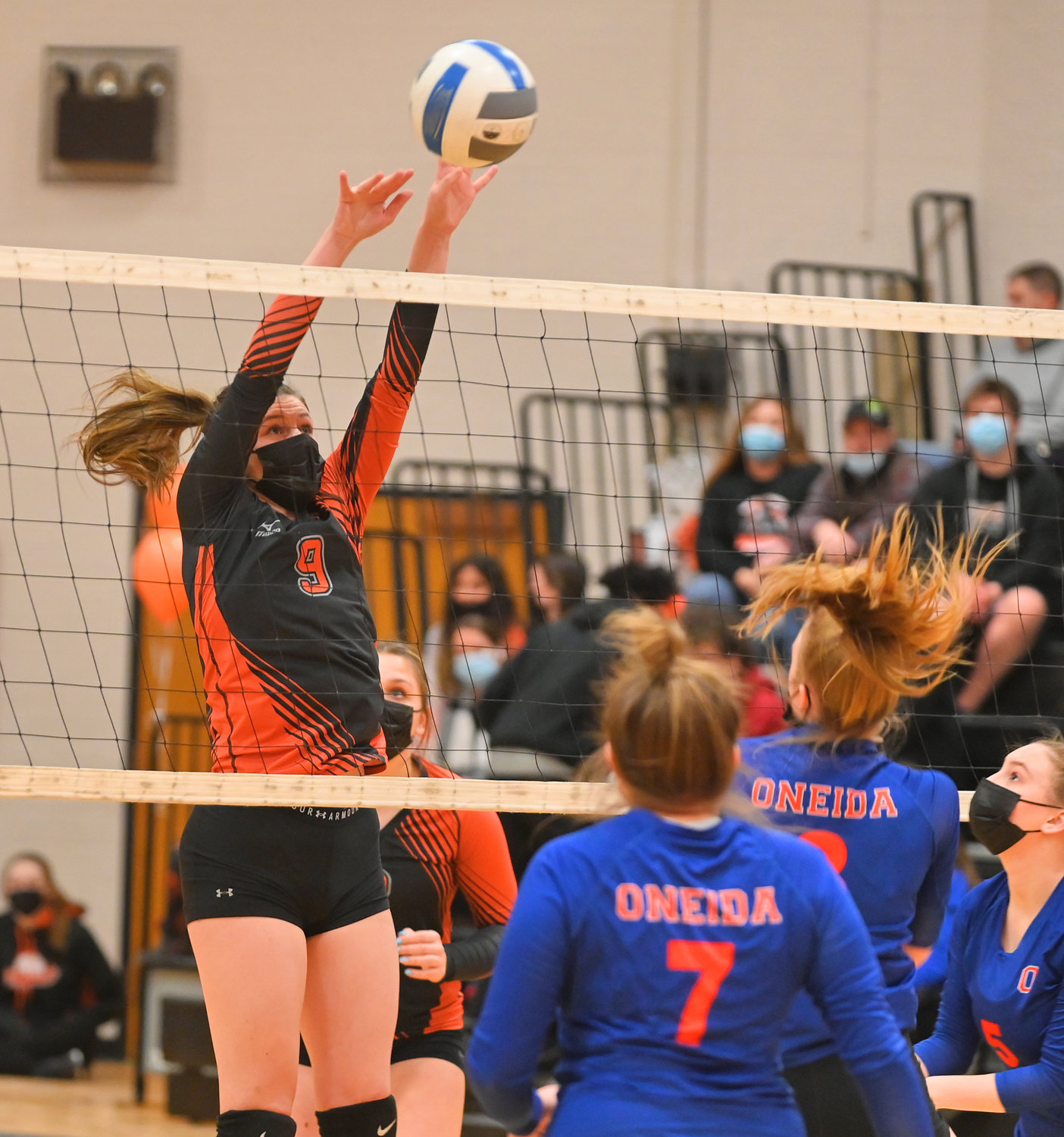 BACK AT YOU — Rome Free Academy's Hayley Voelker sends the ball back at Oneida Monday. From left for Oneida are Amiee Molinari, Rilee Flynn and Madison Zehr. RFA won 3-0.
(Sentinel photo by John Clifford) 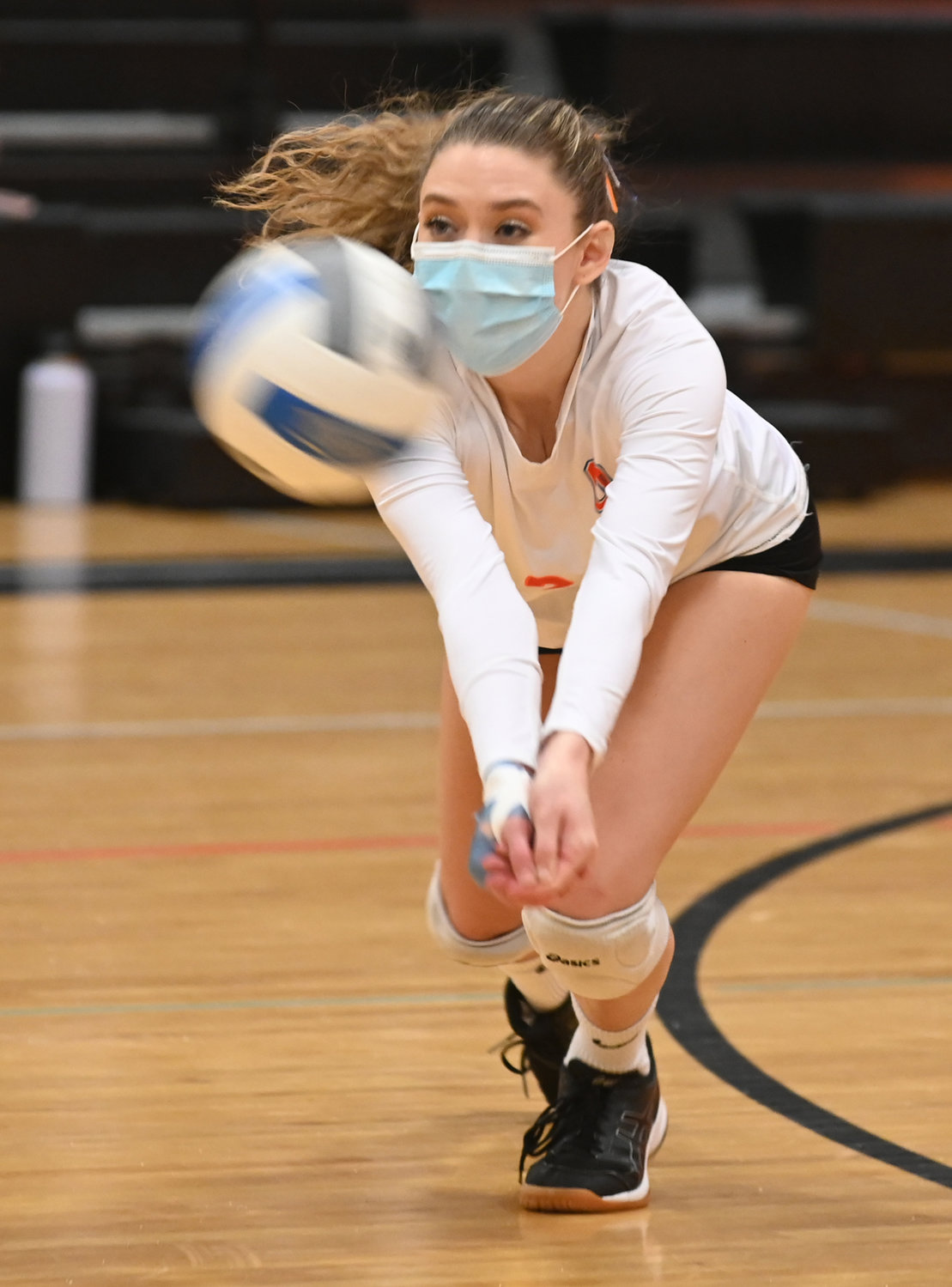 KEEPING IT IN PLAY — Oneida's Genevieve Jacobs digs down to return a serve against host Rome Free Academy Monday night. Jacobs had eight digs and a pair of aces but Oneida lost 3-0.
(Sentinel photo by John Clifford)
Previous Next
Posted Tuesday, January 25, 2022 8:36 am

The Rome Free Academy girls volleyball team got a 3-1 win against Watertown on the road Saturday in non-league play then beat Oneida 3-0 at home in the Tri-Valley League Monday.

Alexis Kennedy had eight kills for RFA. Teammate Elizabeth Hanba had five kills and five digs. Thylia Keoviengsamay had 18 assists, five aces and a pair of kills for the Black Knights and Yanielis Rivera had nine aces and six digs.

Oneida was led by Katie Kinne with eight kills and four digs, Kaydence Bouchard with five kills and five blocks and Madison Zehr with 18 assists.

RFA hosts Utica Proctor at 6:45 tonight in the league.

Oneida visits Whitesboro at 7 p.m. Wednesday in the league.

For Oneida, Kinne had eight kills and five digs. Zehr had 15 assists and four digs.

The Whitesboro girls volleyball team got a 3-0 win in the TVL over Camden Monday.

The Remsen girls volleyball team won 3-0 at home against Town of Webb on Friday and 3-0 at home over Owen D. Young Saturday. Both were Center State Conference games.

For Remsen, Hefner had a dozen kills and three aces. Morgan had 13 assists, four digs and two kills. Remsen was on the road against Owen D. Young Monday. Results were not available at press time.

Westmo girls get a close win

The Westmoreland girls volleyball team won the fifth and deciding set for a 3-2 win on the road against Waterville Friday in the Center State.

Statistics for Waterville were not submitted.

Westmoreland was to host Sauquoit Valley Monday. Results were not available at press time.

For VVS, Tyler Kinne had 21 digs; Cameron Robinson had 13 digs and a pair of aces; Ryan Mumford had a dozen assists and Cole Maguire had 11 assists.

VVS visits Canastota at 6:45 tonight in the league.

Canastota got a 3-0 road win at Westmoreland Saturday in Section III boys volleyball.

Westmoreland (2-4) hosts Little Falls at 6:45 tonight in the league.

Oneida trailed by six at the start of the fourth Monday at home against Bishop Grimes but senior Kaylin Curro scored 14 to get her team to overtime, where she scored all seven Oneida points in a 62-60 win in non-league action.

Curro scored 14 of her career-high 33 points in the fourth quarter. Bishop Grimes tied the game at 55 to send it to overtime. Curro then went on to score all seven of Oneida’s points in overtime in the win.

Curro had 11 rebounds to complete the double-double, and added six assists and a pair of steals. Teammate Kennedy Curro also had a double-double, with 17 rebounds and 10 points. Jordan French scored 13 and grabbed four rebounds for Oneida.

The Clinton girls basketball team outscored Canastota by seven in the fourth quarter to win 35-28 on the road Saturday in the Center State Conference.

The Warriors led 18-10 at the half but the Raiders outscored them by eight in the third to tie up the game. But Clinton outscored Canastota 10-3 in the fourth to get the win.

Canastota’s statistics were not submitted.

Clinton is now 8-7 this season and will play on the road at 6 p.m. Friday against Sherburne-Earlville in the league.

The Oriskany girls basketball team fell behind early and lost 52-34 at Waterville Friday in non-league play.

For Oriskany, Ashley Reid had 10 points and Ashley Burnop had nine points.

Natalee Collins had a game-high 23 points for Waterville.

Oriskany is at New York Mills at 7 tonight in the league.

The Clinton girls hockey team won 11-0 against Rockland at home at Kennedy Arena in Rome Saturday in non-league play. The Warriors got goals from nine different players.

Drew Kopek scored twice and had an assist. Lauren Rey also scored twice. Alexa Thompson had a goal and two assists. Kelsey Fuller, Hailey Kwiatkowski, Mackinley Ronan , Payton Cronk and Gretchen Grimm all had a goal and an assist each. Riley Constantinetis also scored. Alyssa Nardslico had a pair of assists and Kate Elbrecht, Gracen Grimm and Mia Eisenhut had one each.

In net for Clinton, Casey Clausen made nine saves for the shutout win.

The Warriors are now 9-0-1 and will host Skaneateles at 7 p.m. Wednesday at Kennedy Arena.

The Oneida boys swimming and diving team got a 64-37 win at Holland Patent Monday in the Center State.

Dariusz Sargent won the 100 breaststroke for Holland Patent in 1:15.18.

The league championship meet is set for 5 p.m. Friday at Sherburne-Earlville.