RFA football gets comeback win on the road

The Rome Free Academy football team overcame fumbles and penalties, grabbed a late lead and then had to stop Henninger one final time Friday night.

RFA football gets comeback win on the road 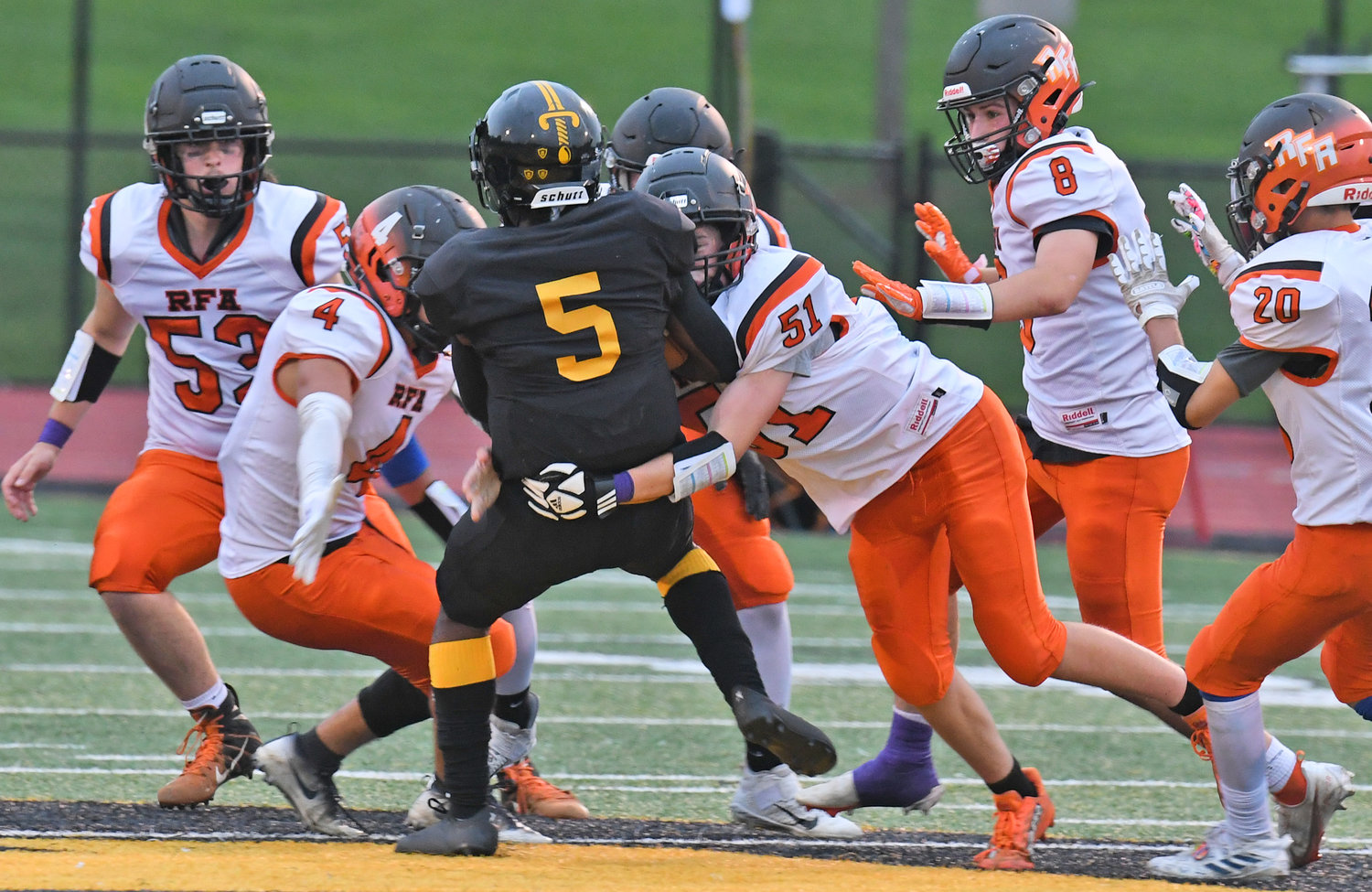 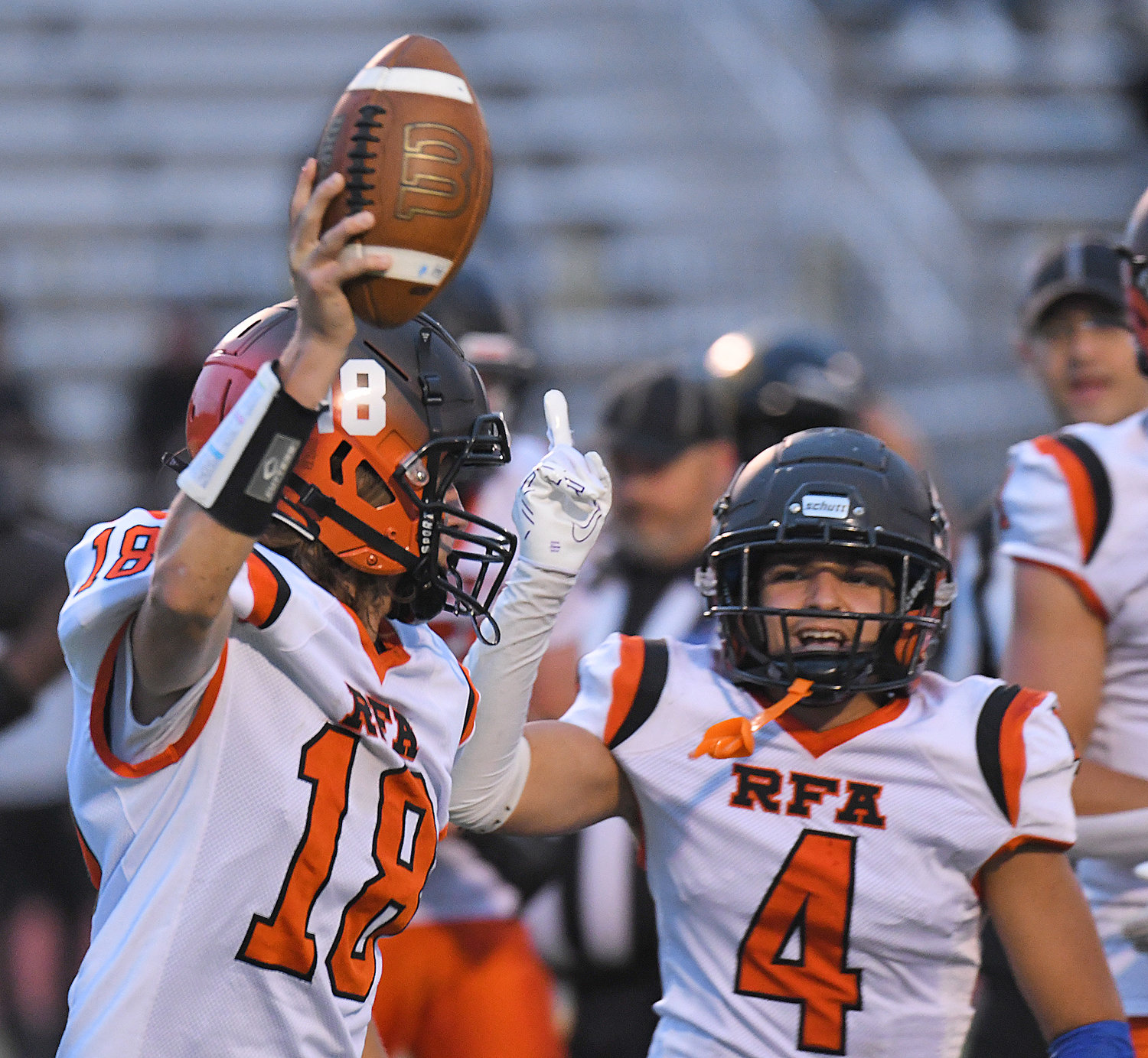 Rome Free Academy sophomore more linebacker Brandon Gillett comes up with a fumble in the second quarter of the team's game at Henninger Friday night. Rome's offense converted the turnover into points and the team got a 21-20 win. The hosts had one late chance to win but Gillett made an interception on a tipped pass to clinch the victory. At right is junior defensive back Ricky Fernandez.
(Sentinel photo by John Clifford) 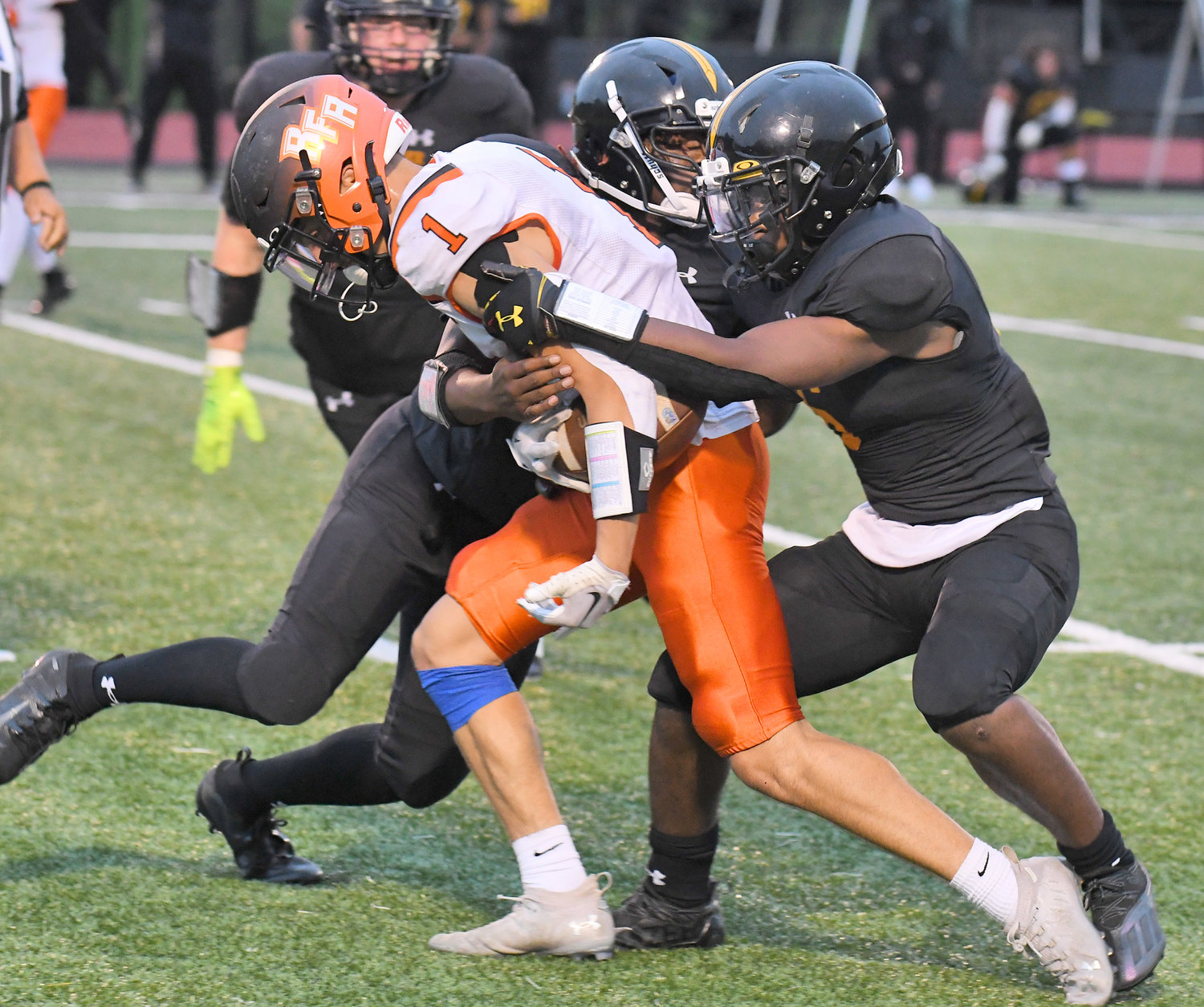 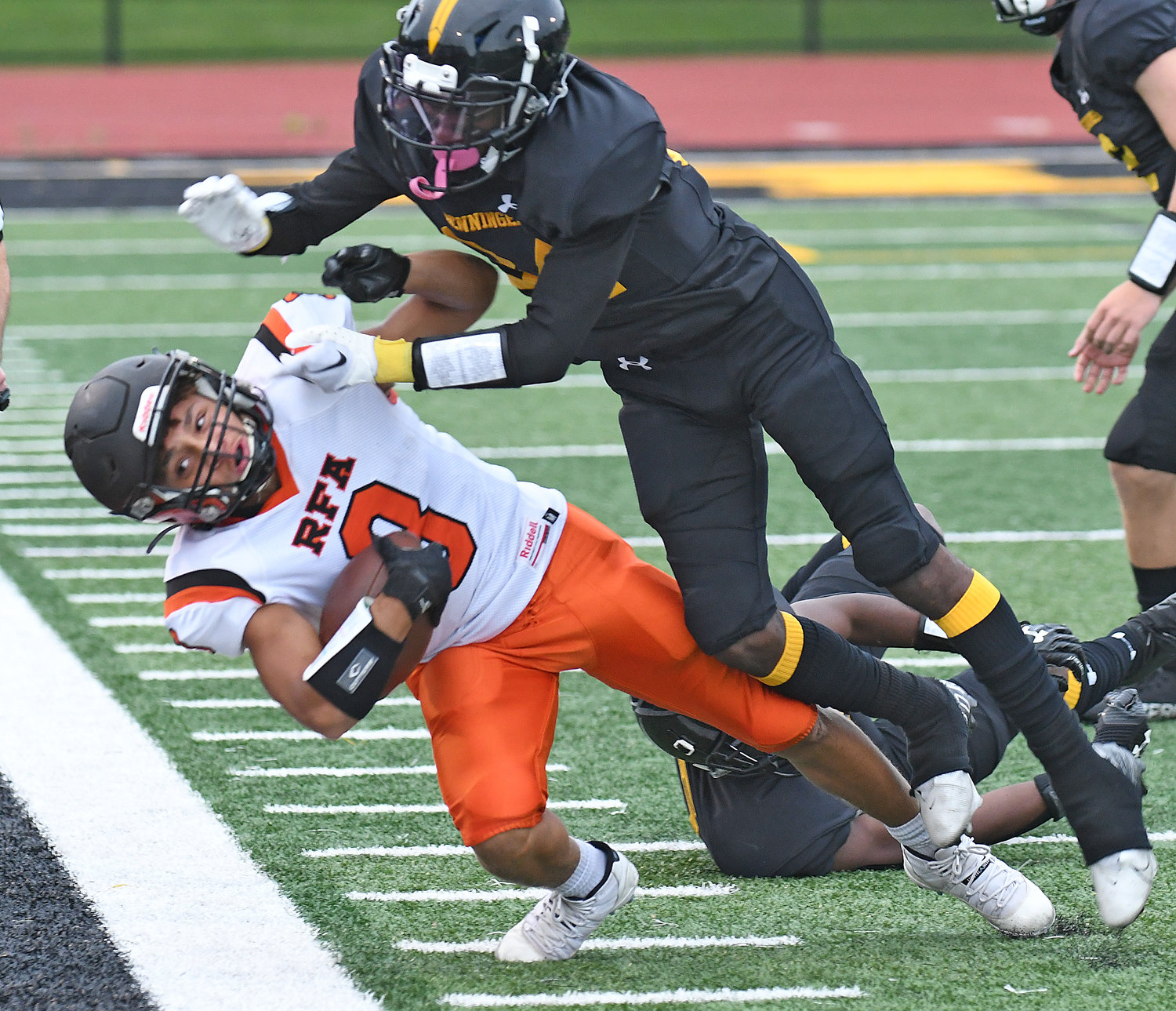 Rome Free Academy receiver Lebron Bowman gets toppled out of bounds by Henninger's Luis Madero-Williams in the first quarter of Friday's game. RFA got a 21-20 road win. Bowman's 55-yard catch and run for a touchdown was the game-winning TD.
(Sentinel photo by John Clifford)
Previous Next
Posted Saturday, September 17, 2022 10:00 am
Steve Jones
Sports writer
email / twitter

SYRACUSE — The Rome Free Academy football team overcame fumbles and penalties, grabbed a late lead and then had to stop Henninger one final time to earn a 21-20 road win in Class AA Friday night.

"Our kids did a great job of riding the wave," said RFA head coach Jake DerCola after the win. They had success but also found themselves behind on the scoreboard too, he said. But a mix of passing and rushing helped keep the Henninger defense off balance, he added. "Our run game did a good job of pushing," he said, despite losing three starting linemen over the course of the game.

On Homecoming night for Henninger, two schools with a Black Knight for a mascot squared off in a back-and-forth nail biter.

RFA fumbled on the ninth play of the opening drive — a signal of the turnovers both offenses would be victimized by all night. Henninger fumbled it back to Rome on a bad snap five plays later.

On the following drive, RFA went for it on fourth and 10 from the Henninger 18 and junior quarterback Evan Carlson-Stephenson rolled to the right and found freshman wide receiver Surafia Norries open in the back of the end zone for a score. Jack Pylman made the first of three key extra point kicks to make it 7-0 for the visitors with just under five minutes left in the first quarter.

The turnovers continued when Norries intercepted Henninger quarterback Hunter Kirnie on the ensuing drive. On the RFA drive, Will'Zarrion Jones intercepted Carlson-Stephenson. The host Knights capitalized by converting the turnover into points. Antwan Vann ran in from 20 yards out and the score was 7-6 with 25 seconds left in the opening quarter.

In the middle of the second quarter, the teams again traded fumbles. RFA coughed up the ball on the Henninger one, then Henninger gave it back to Rome two plays later on the eight. Carlson-Stephenson hit senior receiver Jack Lawless on a slant on the first play for a TD to make it 14-6.

To start the third quarter, the teams again traded fumbles. RFA's Pylman grabbed the ball on his own onside kick but the Knights turned it over three plays later. Henninger returned the favor with its own fumble five plays later.

After Henninger got a turnover on downs at its own 10, the Knights went 90 yards to tie the game. Kirnie hit Armon Adams from 14 yards out and Sean Hunt ran in the conversion to make it 14-14 with 1:28 left in the third. They took their first lead of the game on their next drive. Hunt rumbled 71 yards to the RFA 16 on the first play of the drive then Nishawn Everson ran for a 16-yard score on the next play. The conversion attempt failed and Henninger led 20-14 with 11:26 left in the game.

After the teams traded punts, RFA struck for what would prove to be the game-winner. Carlson-Stephenson threw deep to sophomore Lebron Bowman, who kicked free of a tackle attempt and went 55 yards to pay dirt. Pylman gave RFA a one-point edge when he booted the extra point. RFA led 21-20 with 7:50 remaining on the clock.

Henninger had its last chance with 3:13 left and 97 yards to the RFA end zone. Kirnie hit Jones for a 48-yard pass play to the RFA 37 with 1:46 left. On the next play, RFA sophomore linebacker Brandon Gillett caught a tipped pass for a game-ending interception.

DerCola credited the defense for adjusting to Henninger's big plays, which he noted always happened when ball carriers got to the sideline. "We had to force them back in," he said, and they did. He highlighted players like senior lineman Brian East, who was running on fumes but would not come out of the game. "I'm proud of them for stepping up and gutting it out," the coach said.

"A win is a win. That's the feeling of working all week then getting the victory," DerCola said of the Knights, who won their first game of the season to improve to 1-2.

Carlson-Stephenson ended the game 20-for-43 passing for 303 yards, three TDs and one interception. He also had three carries for 21 yards. His primary target was Lawless, who had 10 grabs for 144 yards and a score.

"Offensive line gave us the holes we needed," the quarterback said of the run game. That allowed running back Sal Martelli to get some running room and draw the defensive backs closer to the line of scrimmage. The tailback had 11 carries for 70 yards plus caught two screen passes for a total of 26 yards. That, in turn, opened up passing opportunities for him, Carlson-Stephenson noted. The cornerbacks were in man-to-man coverage often, he said, "and we have a lot of guys who can beat man-to-man."

The RFA quarterback said the team was up on the sideline even when Henninger tied the game at 14-14. The message then: "Stay hype. Let everyone know we're here to support them." Even when the hosts took the lead at 20-14, "I try to keep my mind set the same," which is to "put the ball in the end zone."

The win showed the team "how much we are here for each other, having each other's backs," Carlson-Stephenson said.

RFA will next play a Class AA game against rival Utica Proctor on the road at 1:30 p.m. Saturday, Sept. 24.