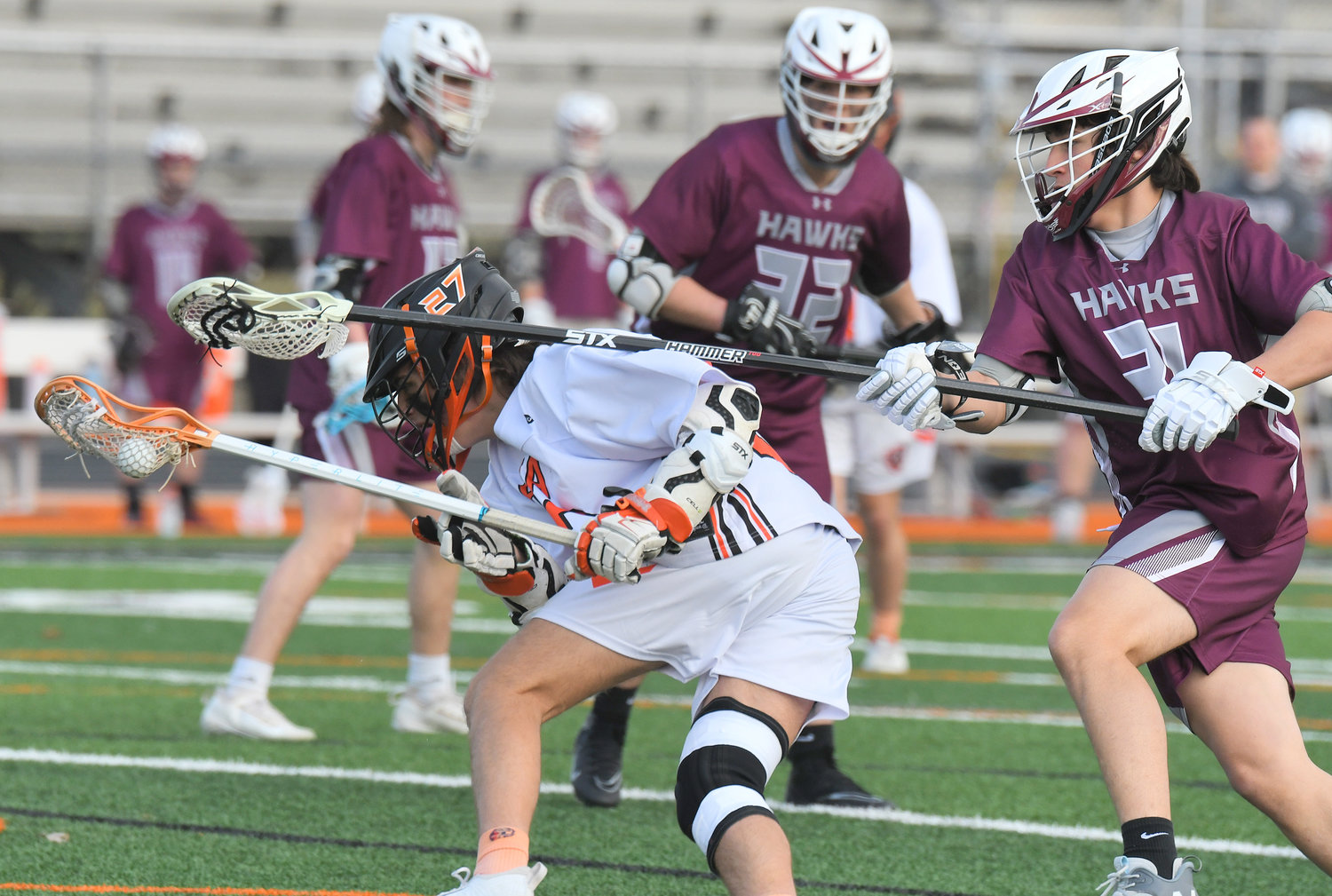 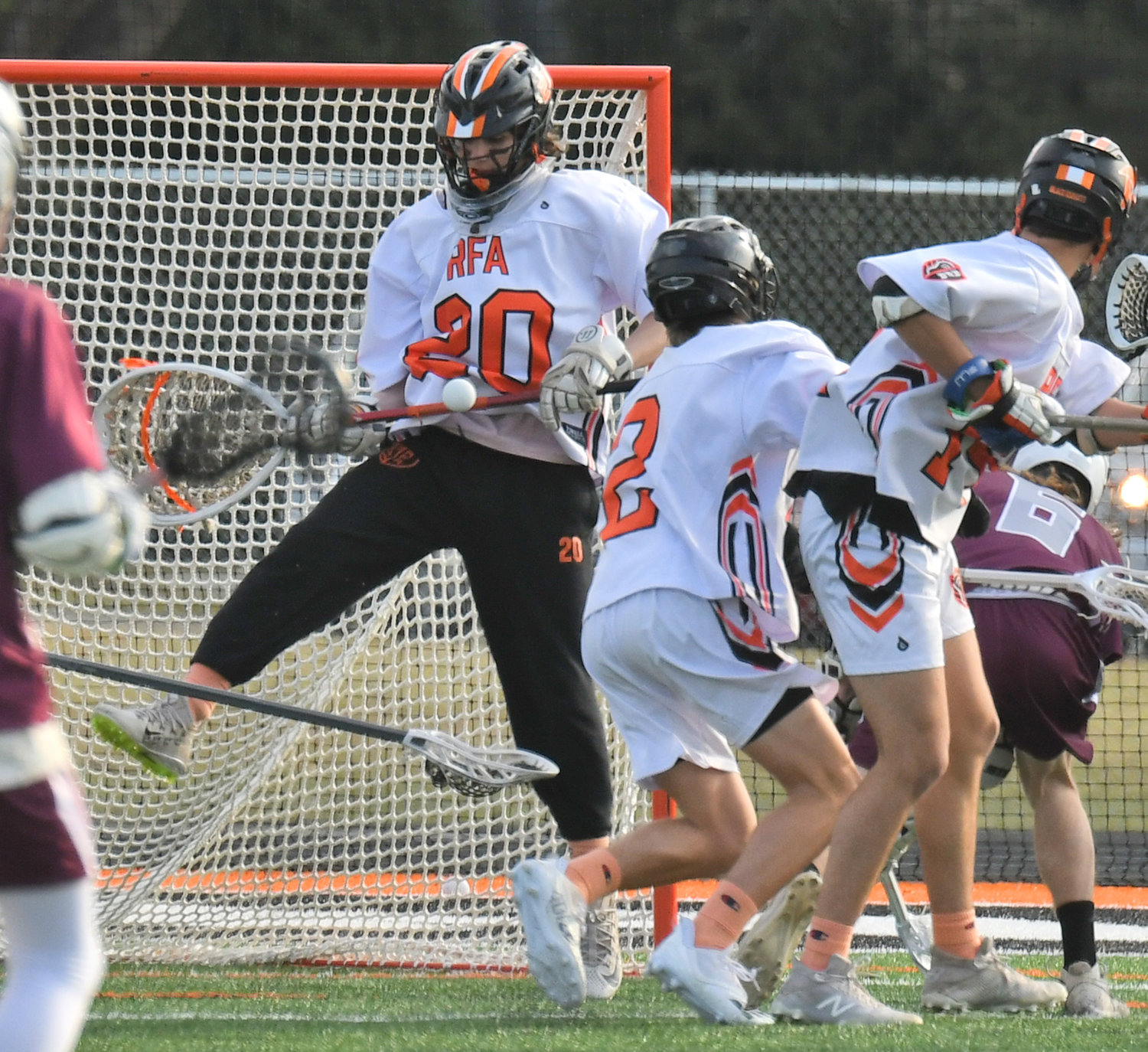 USING THE BODY — Rome Free Academy goalkeeper Treaver Ford makes a save in the first quarter against Central Square at home in RFA Stadium Tuesday. The Black Knights lost 12-10 in their season opener.
(Sentinel photo by John Clifford) 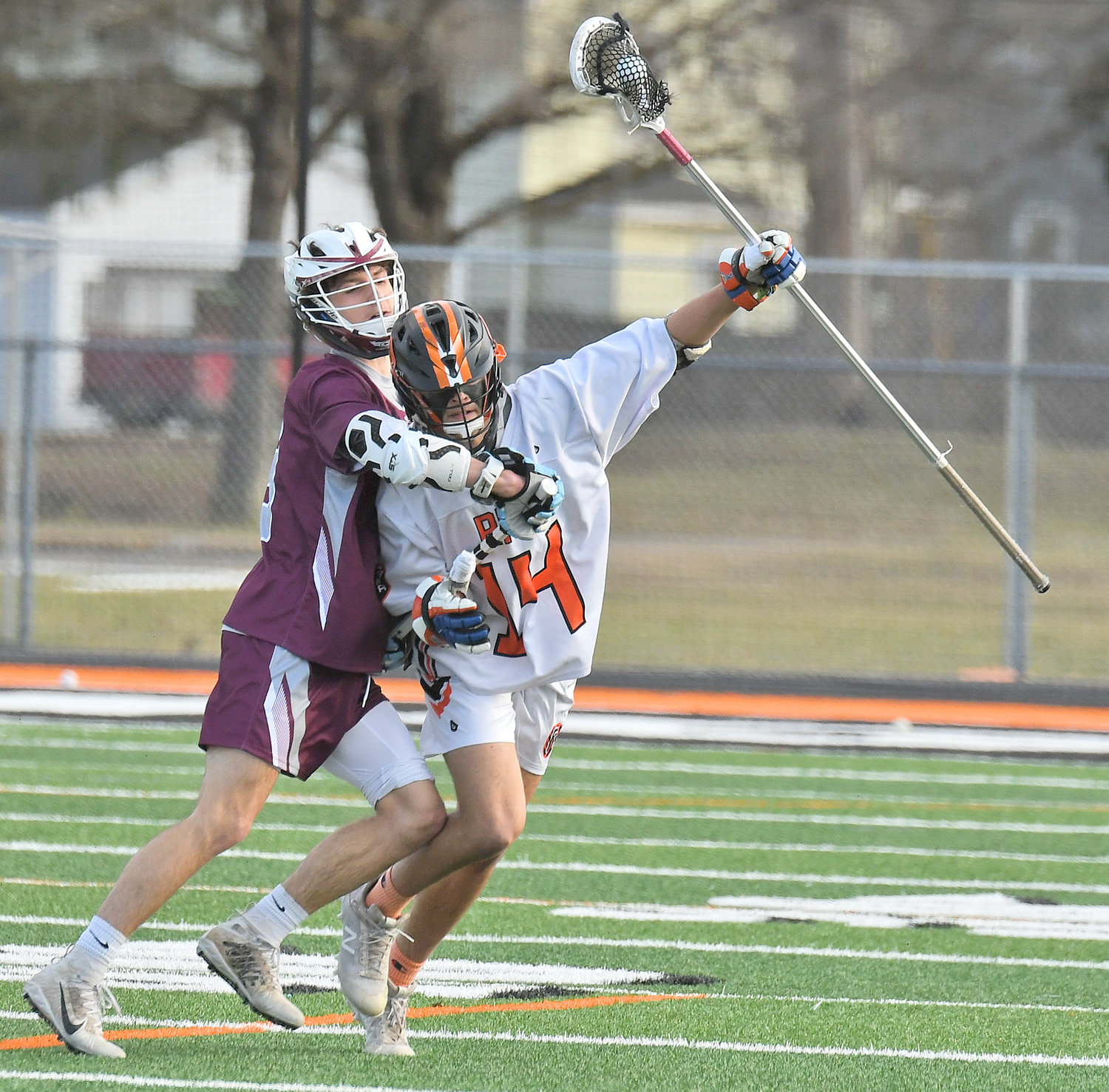 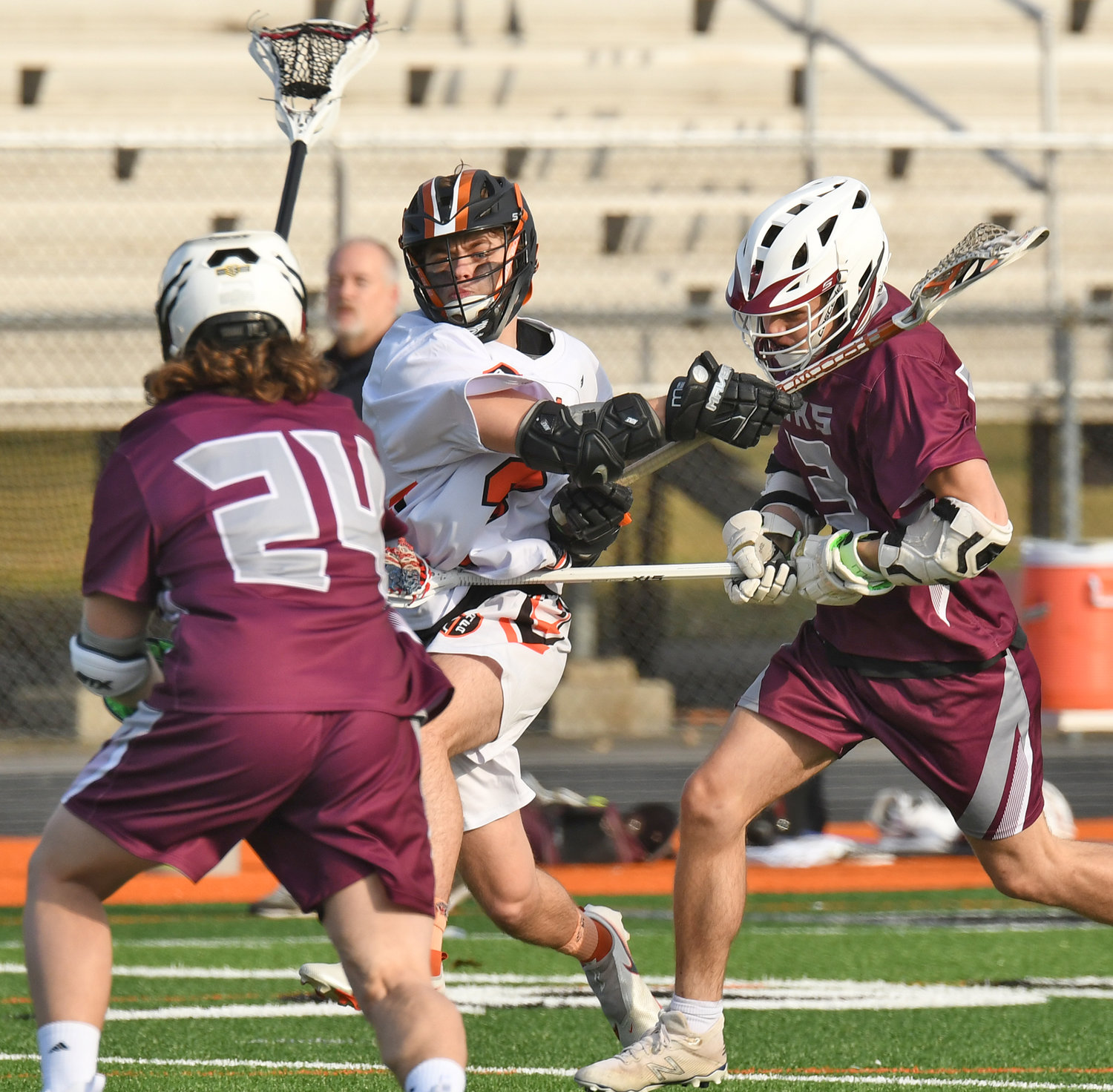 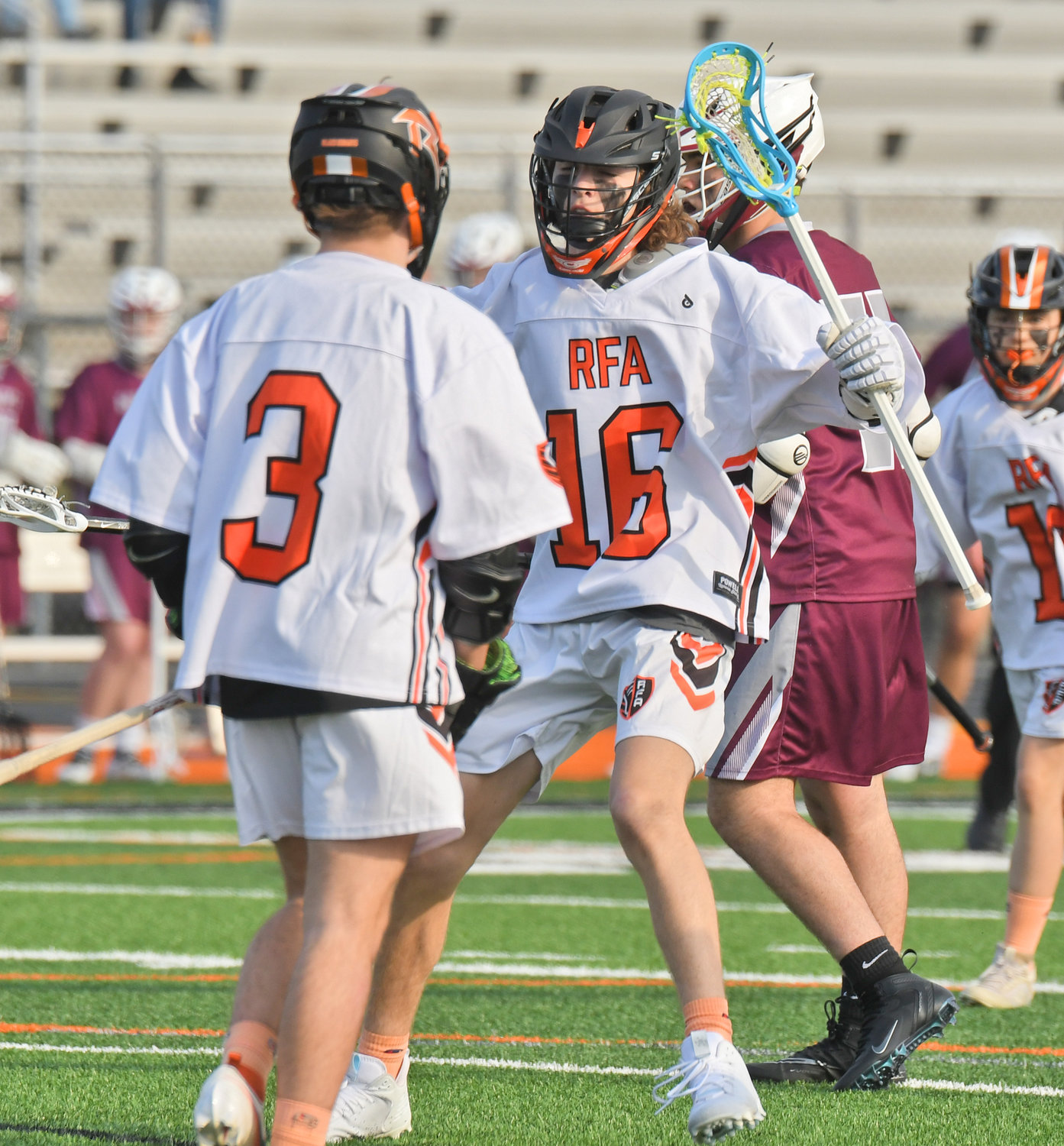 “Happy,” RFA head coach Kiel Adams said after his first game leading the program. “Our kids played hard. We kind of beat ourselves. Dropped some passes here and there.” He said he was “extremely happy with our defense.”

Central Square took a 2-0 lead just before the halfway mark of the first quarter, with a goal by Cameron Johnson then one from Ryan Watrous while a man up to beat RFA goalie Treaver Ford. RFA got its first goal while a man up on a shot by Logan Waterman with 4:49 left in the quarter.

After the Redhawks scored again, this one by Matthew Davis, RFA pulled back to within one with 29 seconds left in the first quarter on a goal by Carmen Orton. The Black Knights knotted the score at 3-3 2:45 into the second quarter when Robert Fanning Jr. scored.

The visitors scored the next three goals in just over three minutes to lead 6-3 — with goals by Jeffrey Meyers, Bryce Koagel and Meyers a second time. But RFA responded with three of the final four goals of the first half, including one as time expired. First it was Casey Podkowka scoring as he was knocked to the ground. Then Orton tallied his second of the game. After another Central Square goal, Waterman took a pass from Max Hunt with a second left and got off a shot that beat Central Square goalie Kyle Waskiewicz to make it 7-6 Central Square at the break.

The Redhawks scored first in the second half, a quick effort by Davis just nine seconds in. Orton got his third goal of the game for RFA with 3:15 left in the quarter to cut the deficit to one goal again, this time 8-7. A goal by Watrous with nine seconds left gave the visitors a 9-7 lead entering the final quarter.

Seth Hammon got his first goal of the season for RFA with 5:11 left to trim the lead to four. Then, with 1:51 left, Fanning scored his second goal to make it 12-9. Central Square took a penalty with 53 seconds left and Matthew McCormick scored for RFA to narrow the gap to two goals.

The Knights couldn’t muster another one and fell 12-10.

“Morally, it was good,” Adams said. “I’m happy with where we are now.” He said the team has to work on “just passing and catching.” He said Orton “played fantastic for us,” and he credited Waterman and seniors Max Hunt and Hayden McMonagle with for their efforts as well. He also noted that he brought Jaiden Holmes up from junior varsity to handle faceoffs and “he crushed it today.”

The Spartans used a four-run third inning to take a lead they held the rest of the game. They outhit CVA seven to three.

Sienna Holmes got the win in the circle and added a single and two runs scored at the plate. Alex Volo had two hits, two runs and two RBIs.

CVA got singles from Scout Ludwig, Bella Kleban and Morgan Russo. Ludwig drove in the team’s lone run as well.

New Hartford travels to Fayetteville-Manlis for a 5 p.m. start Thursday.

The Westmoreland softball team went off for 21 runs to beat Adirondack 21-4 Monday in the Center State Conference.

Samantha Ferguson was the winning pitcher, allowing two earned runs, and went 5-for-5 batting with two doubles, a triple and six RBIs.

Holly Miller drove in two runs for Adirondack. Ireland Payne took the loss in the circle for the Wildcats.

Westmoreland has a non-league double-header at Oriskany starting at 10 a.m. on April 16.

Adirondack was at Little Falls Tuesday in the league.

The Clinton softball team trailed 5-1 headed to the bottom of the third but rallied with two runs in the fifth and three in the sixth to defeat Morrisville-Eaton 7-5 at home Monday.

Reilly Schenk led the Warriors with three hits. Deanna Heintz had two hits, two runs scored and drove in one. Gracen Grimm had two hits, a run and an RBI.

Pitching statistics for Clinton were not submitted.

Statistics Morrisville were not submitted.

Clinton was at Canastota in league play Tuesday. Results were not available at press time.

The Oriskany softball team lost 9-5 to Hekimer at home to open the season Monday in a non-league contest.

The Magicians scored four in the first inning and added three more in the second.

Juliette Tagliaferri took the pitching loss, tossing a complete game while allowing 10 hits and a walk. She struck out eight.

Offensively for Oriskany Jordyn Carlo was 3-for-4 with a double. Ashley Reid had a single and double.

Jenna Riesel was the winning pitcher, with a complete game effort.

Riesel allowed 12 hits and struck out 10.

For Herkimer Aubrey Lewis was 3-for-3 with three RBIs. Bailey Bray singled and tripled.

Spartans get girls lacrosse win on the road

The New Hartford girls lacrosse team got a 13-10 win on the road against Immaculate Heart Central of Watertown Monday.

In net for New Hartford, Emily Picolla made 13 saves in the win.

Tori Ledoux scored four times and had an assist to lead IHC.

Piper Gonas made six saves in goal for IHC.