News on tennis, golf and more... 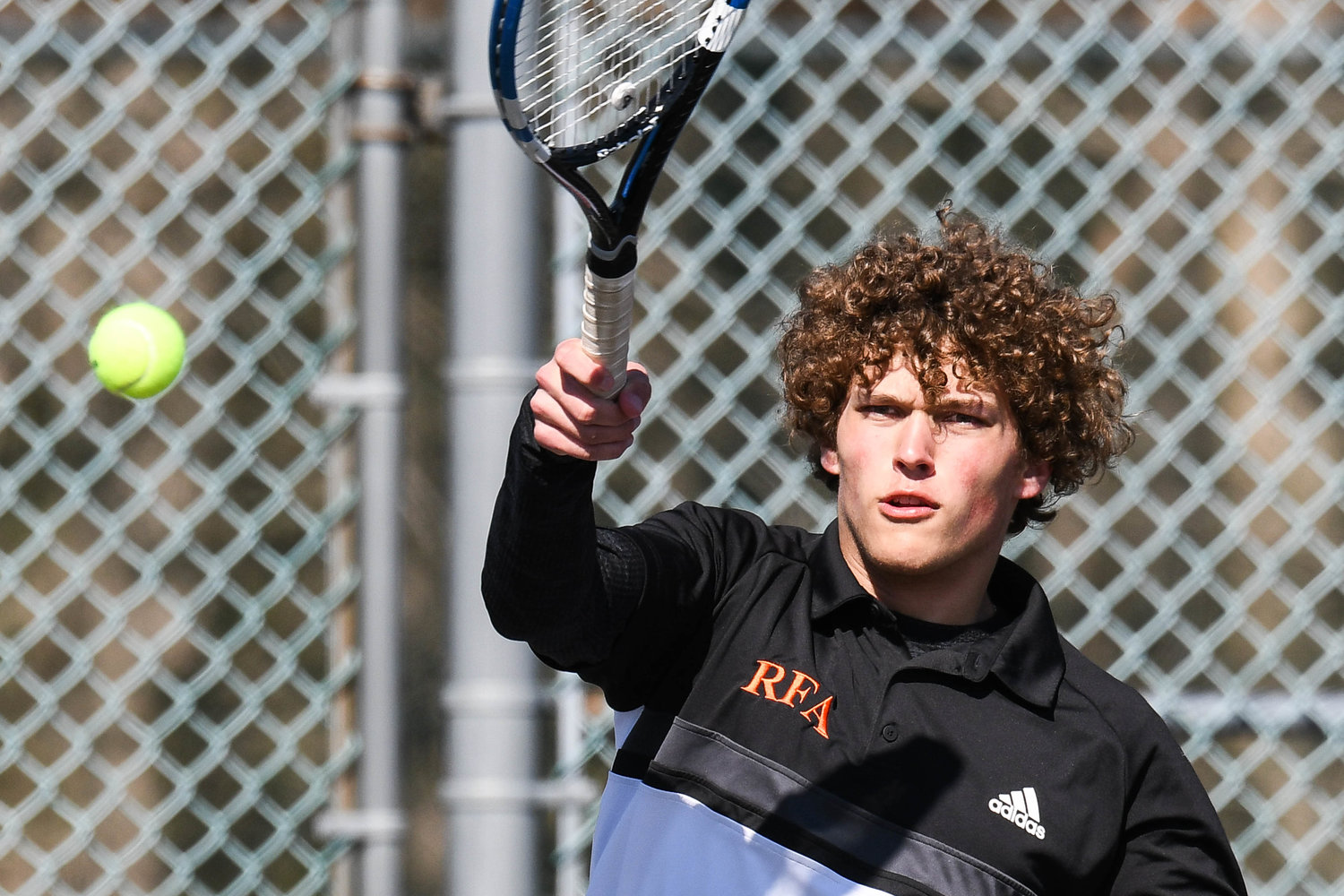 SMASH HIT — RFA’s Philip Pociecha competes during a match against CVA on Thursday on the road in Tri-Valley League play. Pociecha won the first singles match and RFA swept the contest 5-0.
(Sentinel photo by Alex Cooper) 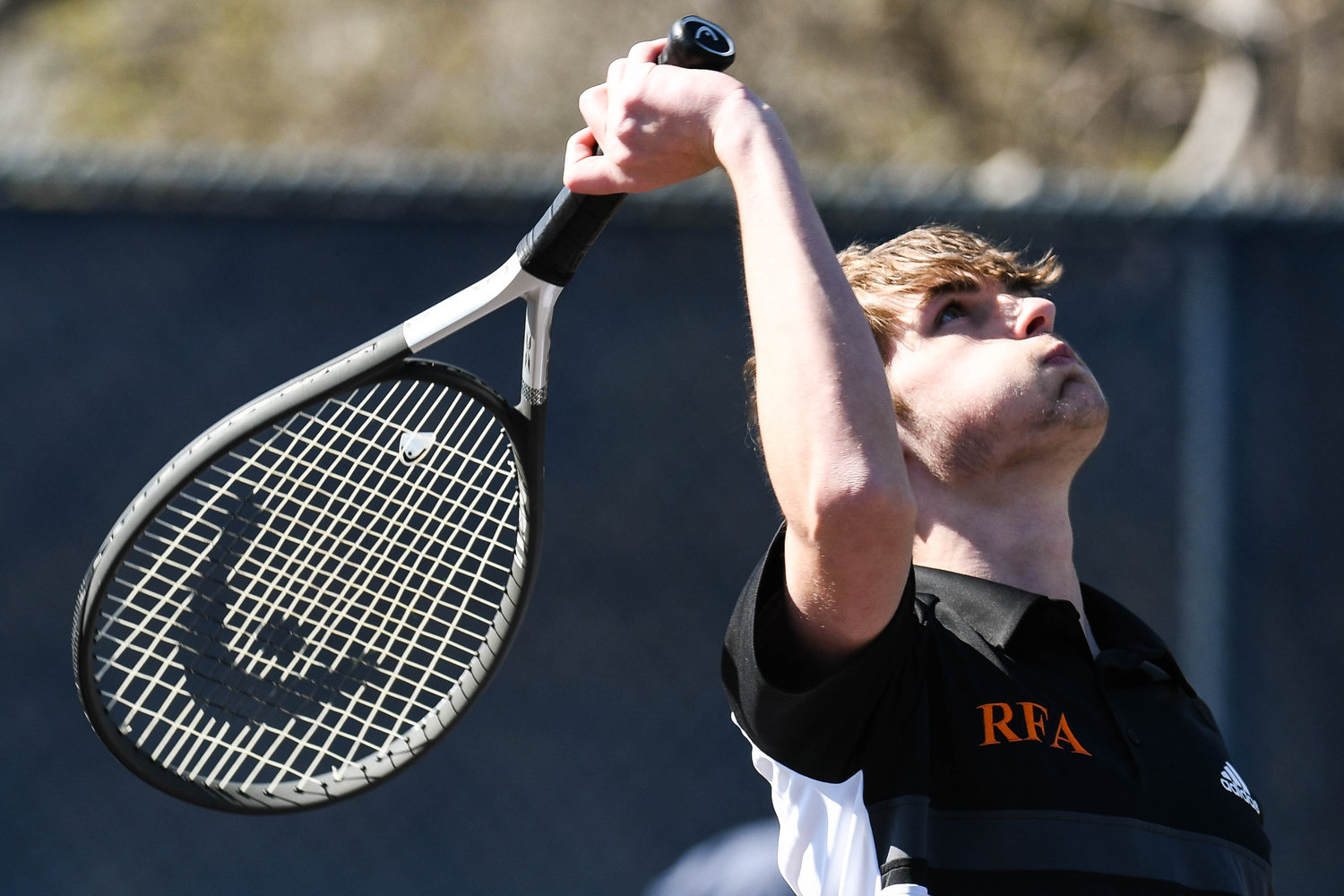 LOOKING FOR AN ACE — Rome Free Academy’s Gavin Civitelli serves the ball during a tennis match against Central Valley Academy on Thursday. Civitelli won in second singles and the Black Knights won 5-0 on the road in the Tri-Valley League.
(Sentinel photo by Alex Cooper) 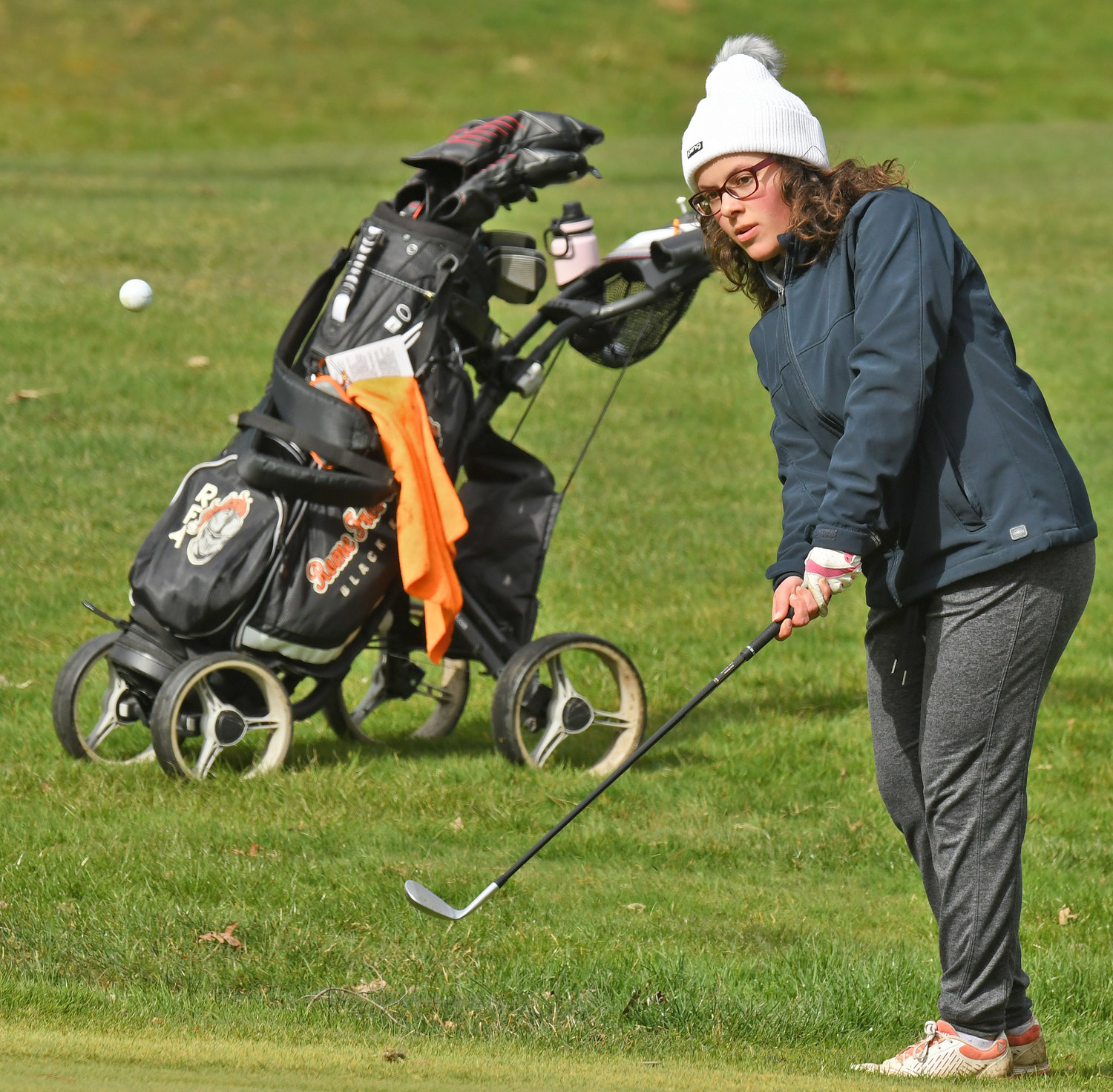 RFA MEDALIST — Rome Free Academy’s Evie Denton chips up to the fifth green in the Black Knights’ Tri-Valley League match with Utica Proctor at Rome Country Club Wednesday. She led RFA with a 46 as the team won 214 to 296.
(Sentinel photo by John Clifford) 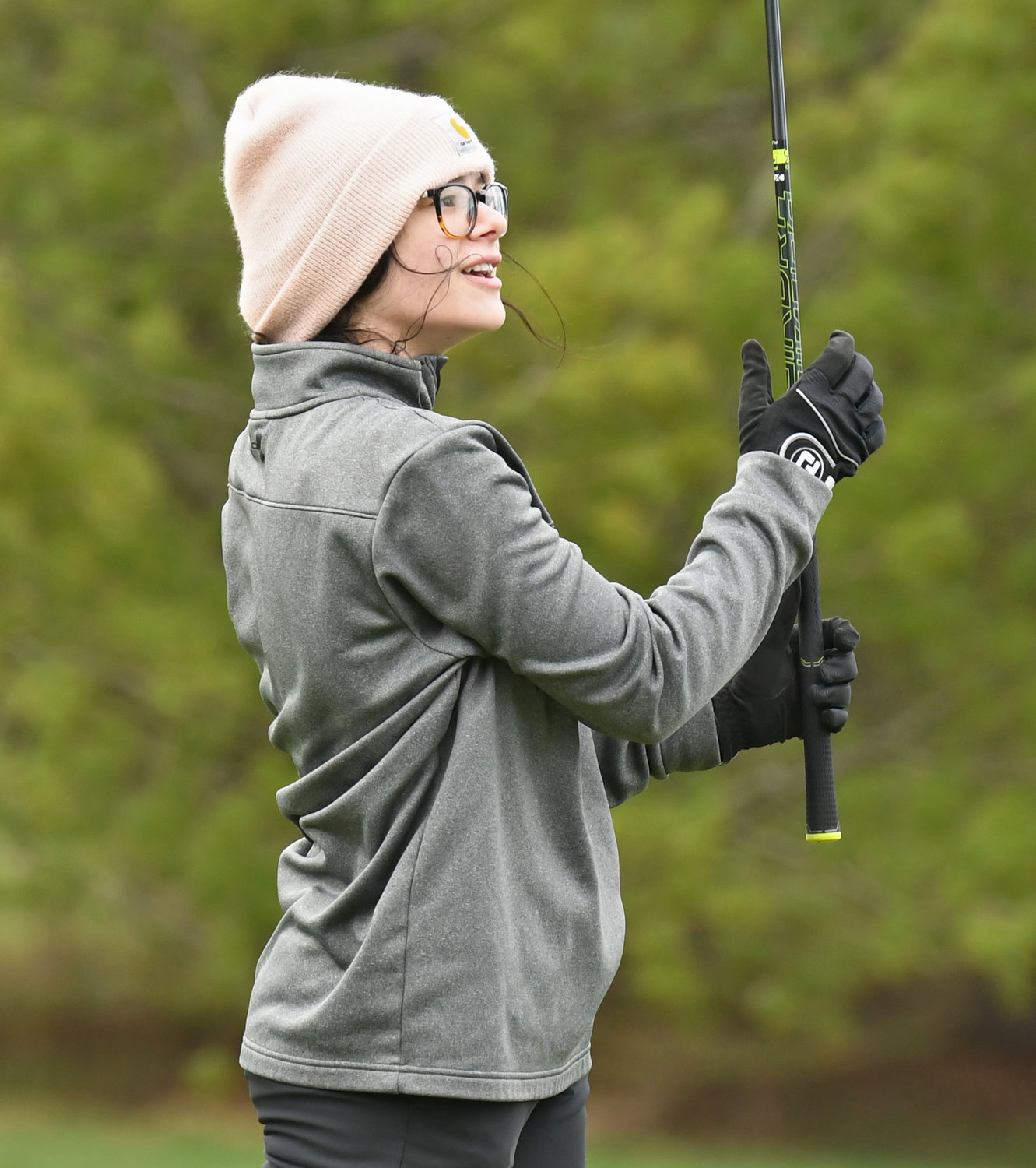 WATCH IT FLY — Utica Proctor golfer Olivia Matrulli watches her drive on the sixth hole during the Raiders’ match with Rome Free Academy Wednesday at Rome Country Club. She had the team’s best round, a 58, but Utica lost the match.
(Sentinel photo by John Clifford)
Previous Next
Posted Thursday, April 28, 2022 7:55 pm

The Rome Free Academy boys tennis team got its first win of the season Thursday when it defeated Central Valley Academy 5-0 on the road in the Tri-Valley League.

RFA won the two contested matches and took forfeits in three others.

The Poland softball team trailed by two headed into the bottom of the seventh but rallied for a 14-11 walk off win at home over Oriskany Wednesday in the Center State Conference.

The teams piled on the offense throughout the game. Oriskany led 3-2 after an inning and 6-4 after three.

Tagliaferri was 2-for-4 at the plate and Lani Roberts was 3-for-4 with a home run and three RBIs.

Shelby Hagues was the winning pitcher, going the distance in the circle. She allowed eight hits and walked five while striking out five. Madison Haver was 2-for-2 for Poland at the plate.

Oriskany played a league game Thursday at Morrisville-Eaton. Results were not available at press time.

Spartans sweep Camden at the net

Evan Lyga and David Berg each won in singles and the Spartans took a forfeit win as well.

The New Hartford doubles pair of Kenneth Kowalczyk and Deen Kaakour also won. The team took a forfeit in doubles as well.

The Vernon-Verona-Sherrill boys tennis team got a 5-0 win over visiting Whitesboro in the TVL Thursday.

The Red Devils also won the doubles matches, with pairs of Jack Mitchell and Isac Rebres and Tristan Wood and Cole Maguire.

Oneida gets close win in tennis

The Raiders won the two doubles matches with pairs of Emin Skiljan and Maksim Morgan and then Andrew Solete and Khang Lai.

Clinton improves to 1-2 overall and 1-1 in the league. The Warriors hosted Morrisville-Eaton Thursday in the league. Results were not available at press time.

Canastota is 1-4, 0-3 in the Center State. The Raiders host Holland Patent at 4 p.m. Friday in the league.

The Holland Patent boys tennis team won all five matches at home against Little Falls in the Center State Wednesday.

The winning duos in doubles were William Zimmerman and Christopher Kelly and Sawyer Locke and Matthew DePerno.

HP is now 4-1, 3-0 in the league. The Knights visited Lowville in non-league play Thursday. Results were not available at press time.

Evie Denton was the medalist for Rome with a 46.

Proctor’s top score was the 58 fired by Olivia Matrulli.

Whitesboro boys golfers get by RFA

The Whitesboro boys golf team got a 229 to 280 win on the road against RFA at Rome Country Club in the TVL Wednesday.

Mike Stilwell was the Warriors’ medalist with a 41.

RFA’s best score was a 48 by Michael Occhipinti.

Whitesboro improves to 3-0 and hosts Utica Notre Dame at 3:30 p.m. Monday at Hidden Valley Golf Course in the TVL.

RFA, 0-3, was at Camden in league play Thursday. Results were not available at press time.

The Oriskany boys golf team improved to 3-0 this season with a 182 to 248 win at home at Crestwood Golf Club over Westmoreland Wednesday in the Center State.

Nick Deriso led Oriskany with a 42.

Westmoreland’s medliast was Jeremy Riggles, who shot a 60.

Westmoreland, 0-1, hosted Waterville Thursday at the Westmoreland Golf Course. Results were not available at press time.

Adirondack is best among three in boys golf

The host Adirondack boys golf team had the best score in a match where West Canada Valley was second and Poland was third Thursday at Woodgate Pines.

Sam Andrews led Adirondack with a 41.

West Canada Valley’s medalist was Will Smith with a 47.

For Poland, Trent Hobin’s 61 was a team-best.

Adirondack golfed against Town of Webb and Dolgeville at Hopson Hills Golf Course in Salisbury Thursday. Results were not available at press time.

Caden Engle was Clinton’s medalist with a 42.

For New York Mills, Jaydon Dietz led scorers with a 36.

New York Mills will play against Holland Patent at 3:30 p.m. Friday at Camroden Golf Course in the league.