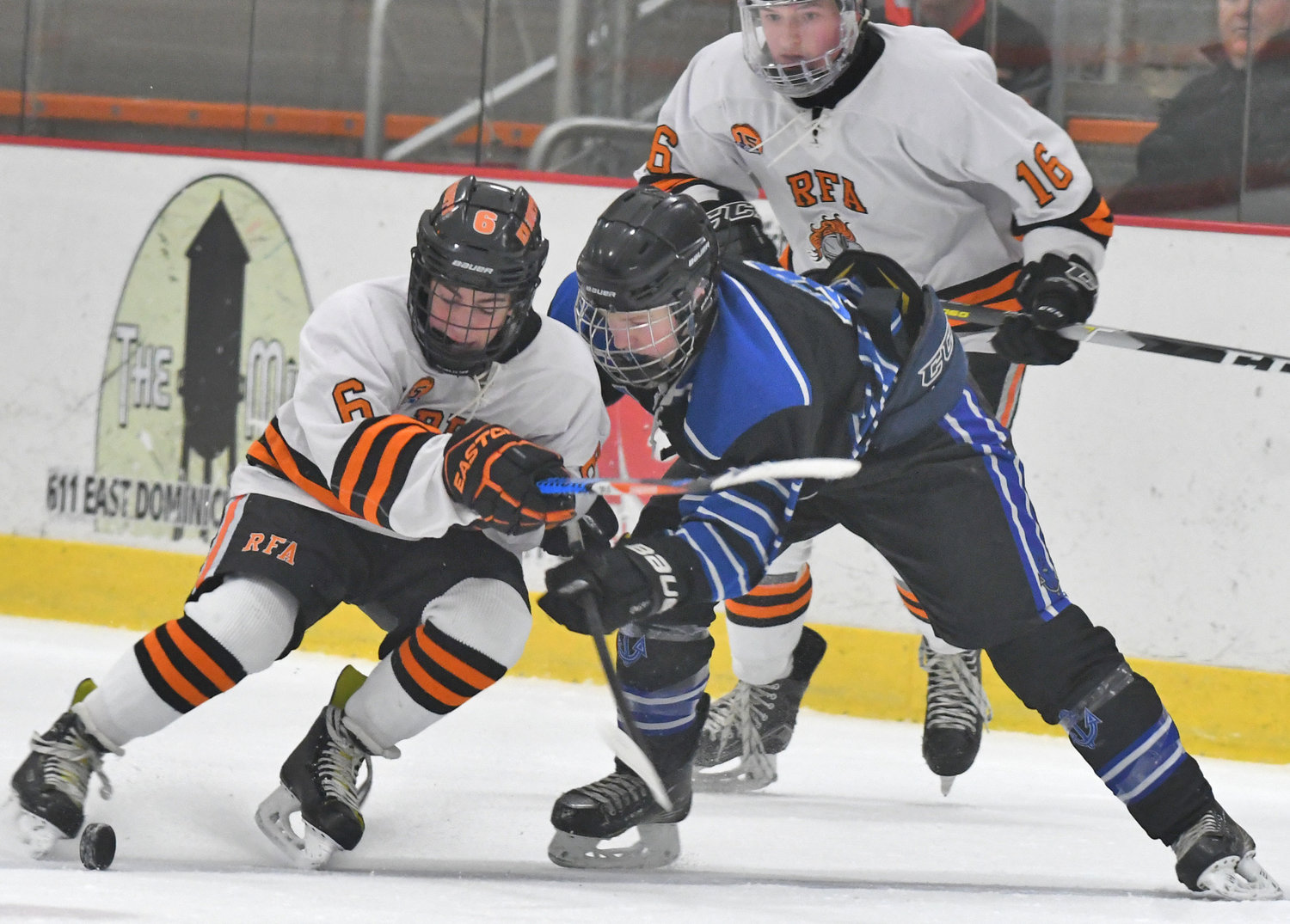 RFA #6 and Geneseo #9try to control the puck 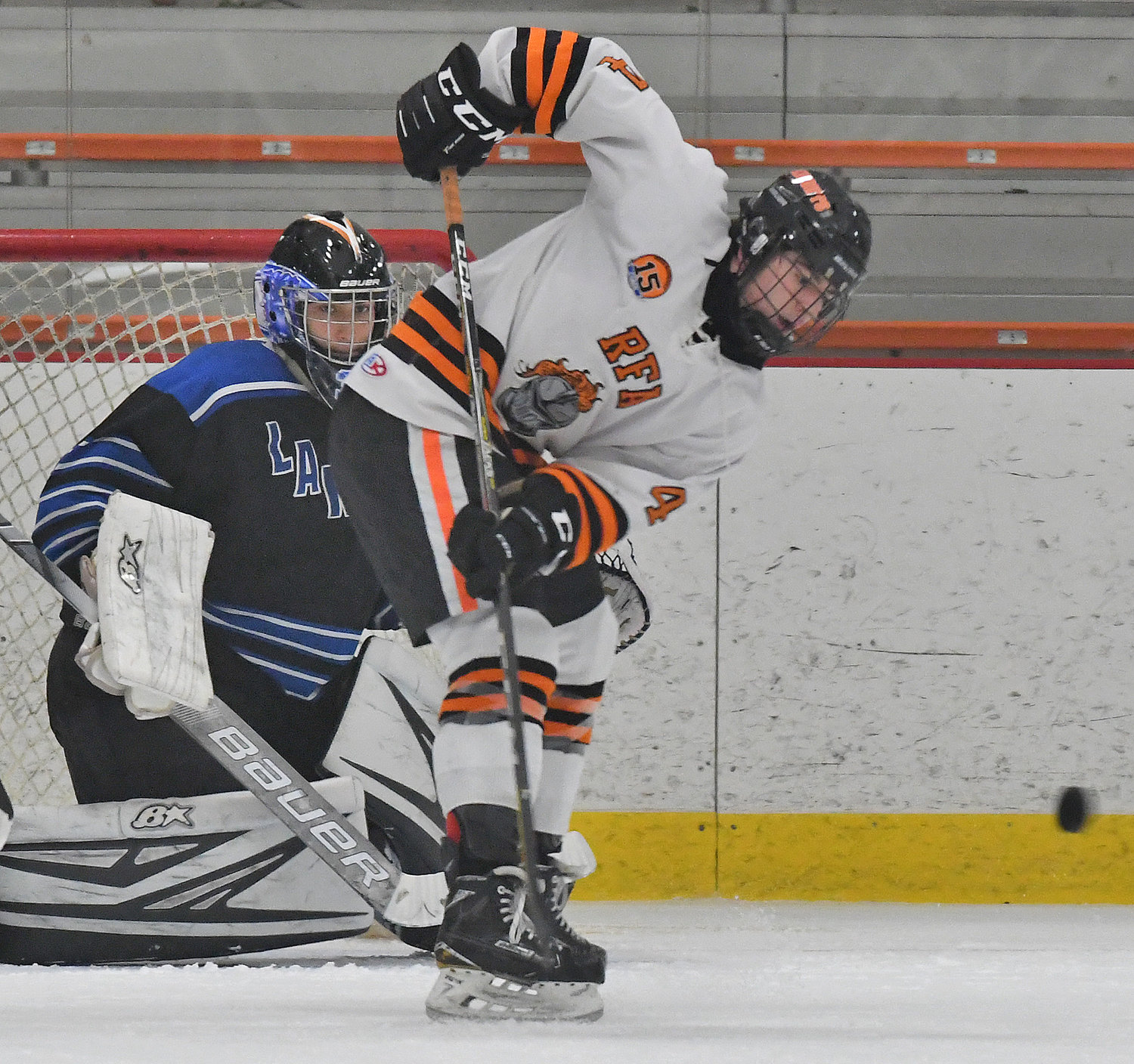 RFA #4 in front of the Geneseo goalie in the first period. 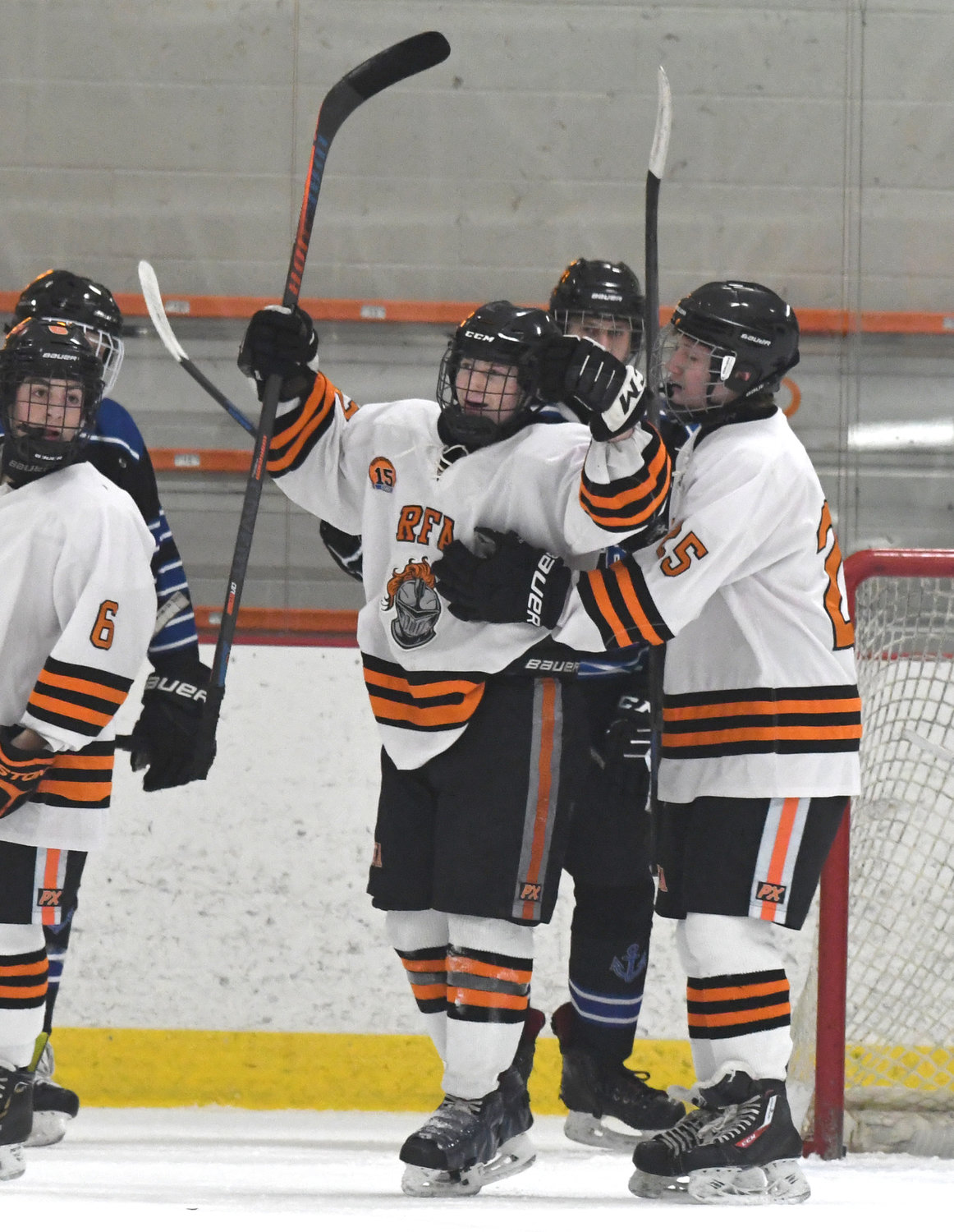 RFA #27 reacts to scoring the first goal of the game.
Previous Next
Posted Monday, January 14, 2019 11:00 am
It was a good weekend for Rome Free Academy hockey, as the Black Knights won both of their games, outscoring Geneseo 8-0 Saturday afternoon after beating Cazenovia 5-0 Friday night.
Black Knights goalie Isaiah Nebush followed up his Friday shutout with a 30-save shutout Saturday.
“He’s continuing to give us consistent effort,” RFA head coach Jason Nowicki said of Nebush after the win. “His competitiveness is second to none.”
“It was pretty good,” said Nebush after the second shutout. He praised his teammates for good communication. “I have four, five, six good defensemen on the back side.”
It took RFA seven minutes of near constant time in control of the puck before it broke into the scoring column. With 10:07 left in the first period, senior defender Danny Mecca drove in on the right side then headed to the net. His looping shot bounced off sophomore forward Logan Dorfman
and past Geneseo goalie Isaac Sweet. Mecca earned an assist on the play.
With 30 seconds left in the first, RFA was on a penalty kill when Mecca pushed the puck up the right side before centering a pass to junior forward Griffin Eychner, who fired the puck home from low on the left side. It was Mecca’s second assist of the game and the goal made it 2-0 RFA.
Mecca earned his third point of the game by opening the second period scoring. With 12:11 left in the period he got the first of the team’s two power play goals when he fired a point shot that found its way through a tangle of bodies in front of Sweet. Senior defenseman Michael Bostwick and senior forward Aaron Simons assisted on the score that made it 3-0.
The Knights got their second power play tally with 8:26 left in the middle frame. Sophomore forward Jake Hall took a pass in the left slot from
Mecca and snapped off a shot that beat Sweet. It was Mecca’s third assist of the game.
With four minutes left in the period, Bostwick got his own goal and Mecca tallied his fifth point of the day. Bostwick’s shot from the left point bounced off a Geneseo defender right in front of Sweet and trickled to the back of the net.
RFA made it 6-0 with 9:13 left in the game as Simons grabbed the rebound from a shot by Eychner and snapped off a shot low on the left side before Sweet could get across the crease in time. Eychner earned an assist.
Eychner got his second goal of the game with just under six minutes left. He stole the puck in the Geneseo zone, rolled off a body check and grabbed the puck back as he settled into the right slot then wired a shot past Sweet glove side.
Forward Joey Gulla took a pass from fellow sophomore Dominick Gualtieri, raced in on the left side and fired a wrist shot past Sweet for the eighth and final goal of the day. Gualtieri earned the assist on the goal that made it 8-0 with 4:22 left in the game.
“It was a very good weekend,” said Nowicki. The coaches preached the transition game and forechecking at practice Wednesday and Thursday, he said, and “the kids really responded well in those practices.” He played several more players in the two games and said it seemed to give the players more energy in their legs.
RFA improved to 10-3. They will put their 4-2 Division I record on the line in the next game, a home contest against Baldwinsville at 7 p.m. Tuesday at Kennedy Arena.
Nowicki said it will be a good test for the team that is now 7-0 at home. “I’m excited for that game and how our kids will respond to a team we might see in the playoffs,” said Nowicki of the Bees, who are 7-2 in Division I.
“It’s a great program and a great coaching staff,” Nebush said, noting that this roster is capable of playoff success at the sectional and even state levels. “Everyone of our team works hard. If we work hard, we go far.”