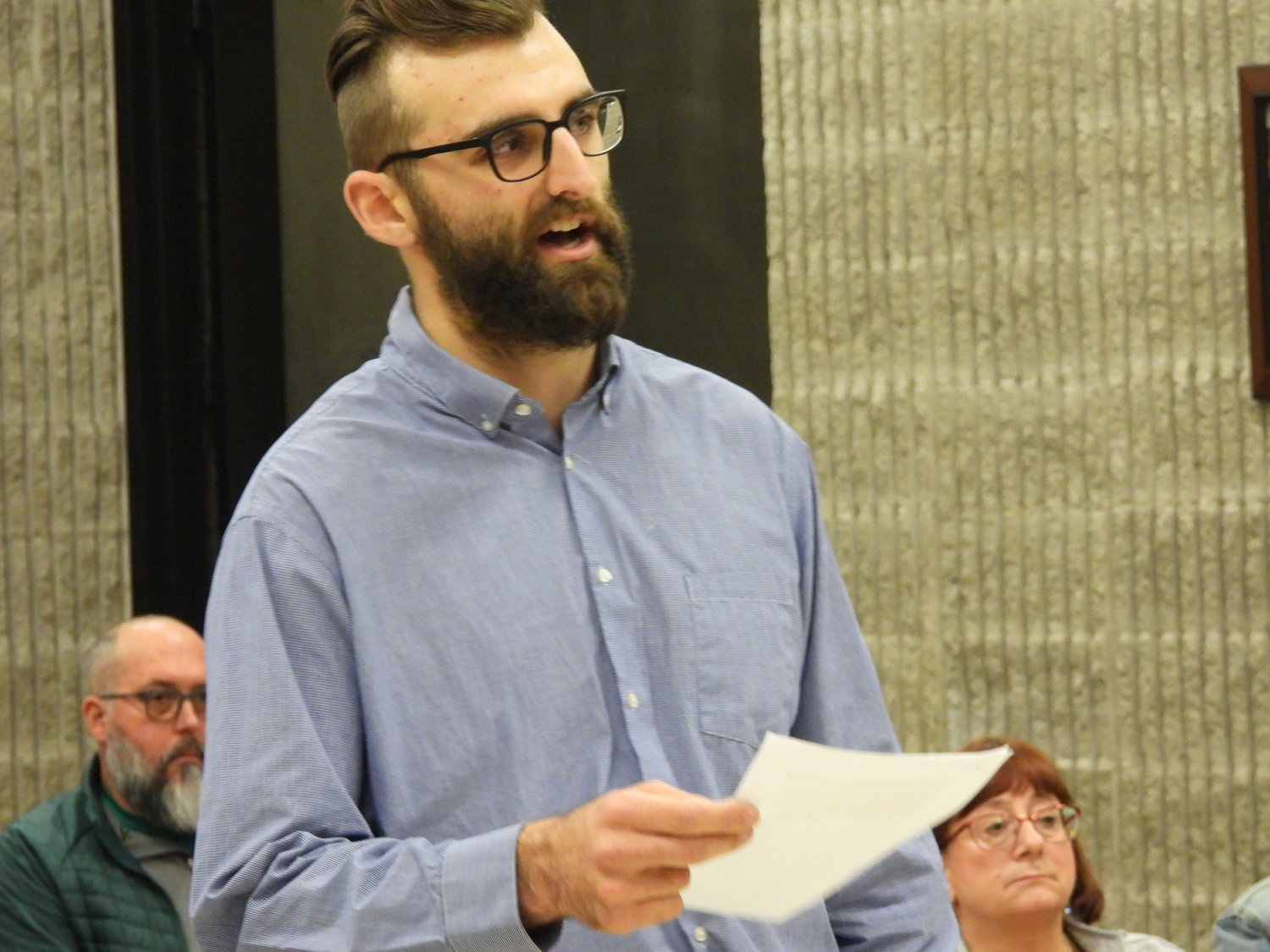 POTENTIAL TAX REVENUE — Jacob Cornell, co-owner of Cornell’s Greenhaus in Oneida, encourages members of the city council to opt-in and allow dispensaries in the Oneida, citing around $200,000 in potential tax revenue.
(Sentinel photos by Charles Pritchard) 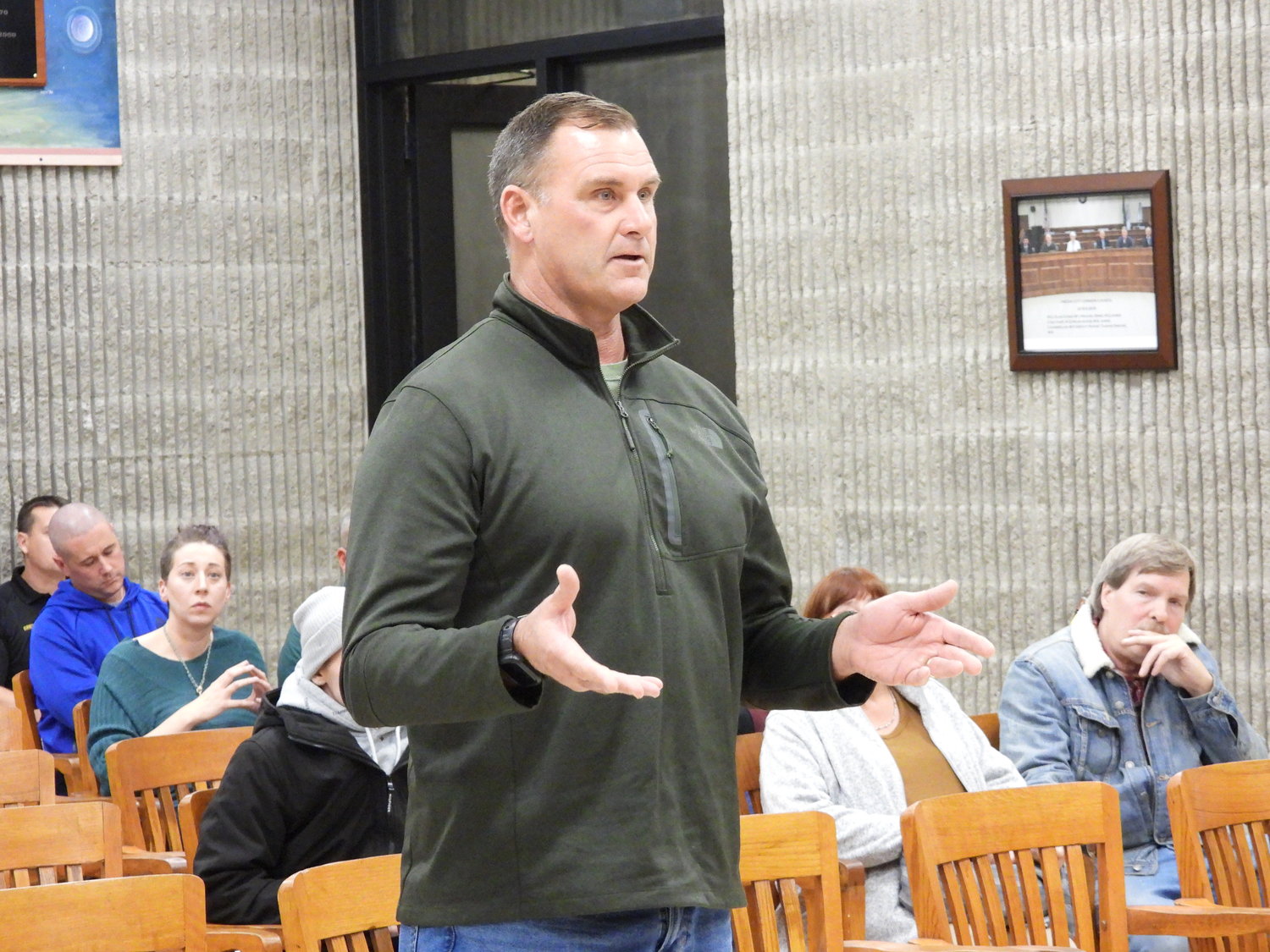 A LACK OF CONTROL — Madison County Sheriff Todd Hood speaks before the city council at Monday’s meeting, warning Oneida lawmakers that there are no measures in place to stop people from smoking pot in public like there are laws to forbid people from drinking in public.
(Sentinel Photo by Charles Pritchard) 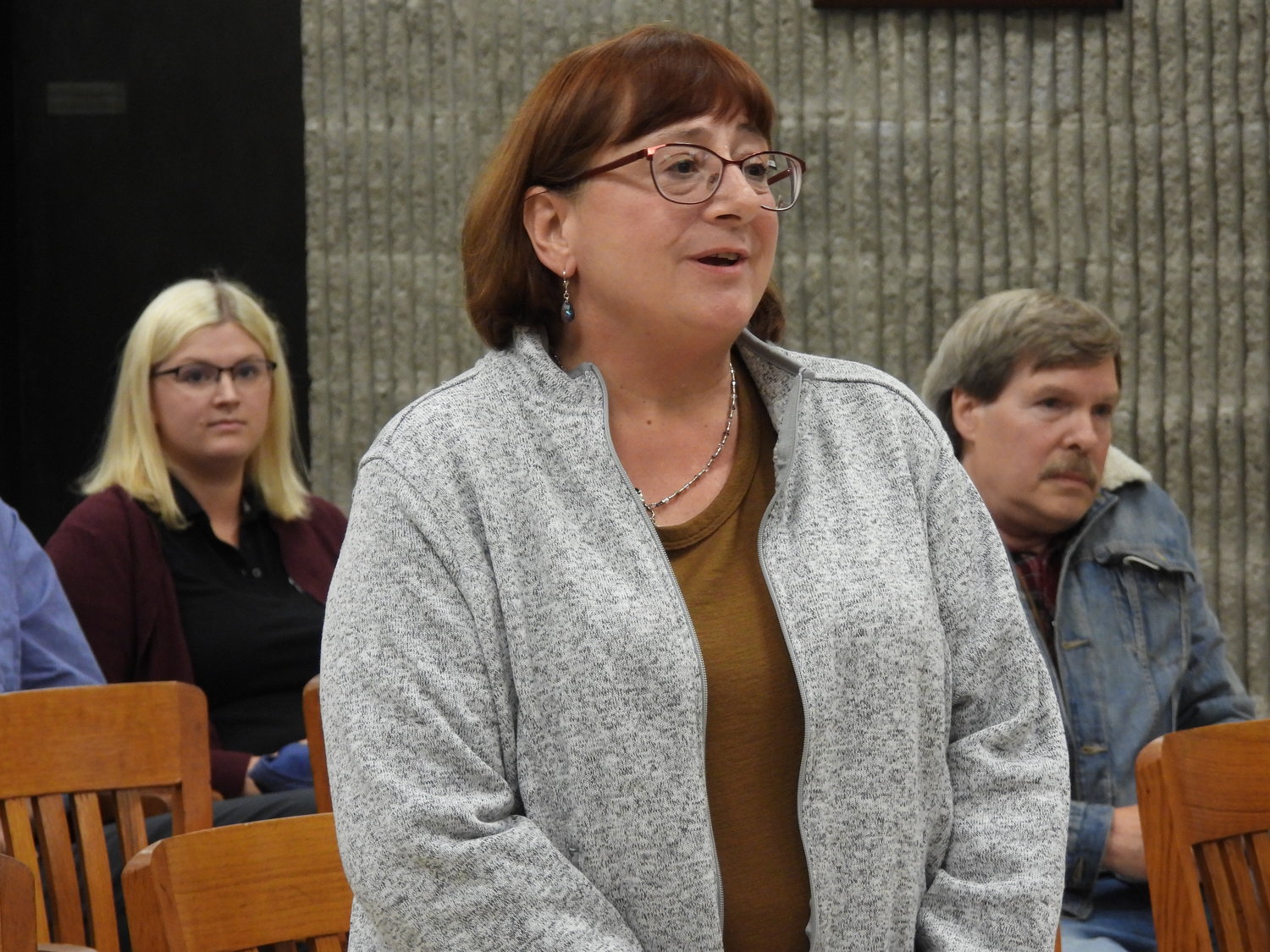 MEDICAL USE — Dee Schaefer, a 64-year-old resident of Oneida, talks about the benefits of medical marijuana and it being so close to Oneida at Monday’s public hearing.
(Sentinel photo by Charles Pritchard)
Previous Next
Posted Wednesday, November 3, 2021 8:10 am
Charles Pritchard

ONEIDA — About 10 Oneida residents had their say at a public hearing on the licensing of retail cannabis dispensaries in the city at Monday night’s Common Council meeting.

The public hearing was not on the legality of marijuana in the city — that has already been decided by the state earlier this year — but on whether it can be sold at retail shops in the city.

As part of the state’s legalization legislation earlier this year, municipalities are allowed to decide whether they will permit its sale in their community. A municipality has until Dec. 31, 2021 to opt out. Although it can still opt-in in the future. However, if municipalities do not opt-out before Jan. 1, 2022, they will be considered to have opted in.

The majority of people who spoke at the public hearing favored allowing the establishment of cannabis dispensaries in the city, such as Jason Brodfuehrer; those opposed included Madison County Sheriff Todd Hood, who discussed concerns with a lack of controls in place.

Brodfuehrer said, “as a patient who uses medical marijuana, there’s not a lot of options to receive this. It’s either going to Albany or Syracuse. There’s nothing in between. If you opt-out, you’re hurting the citizens of Oneida.”

Brodfuehrer continued, saying that Oneida, in the middle of New York state, would be able to offer medical marijuana to other patients nearby who don’t want to make the drive to Syracuse.

Jacob Cornell, co-owner of Cornell’s Greenhaus in Oneida, spoke and encouraged the city council to reconsider opting out.

“The biggest argument I’m hearing against opting in is that the city would have no say in zoning or limiting how many dispensaries can be in the city if we opted in now — but this is untrue,” Cornell said.

“Cornell’s Greenhaus cannot sell marijuana without consent from the city as it stands,” he continued. “Not only that, we’re more than willing to work with the city to be a positive force of change. [But opting out] will bleed us dry as other municipalities continue sales and zone out small businesses, laying the path for large corporations to fill the vacuum.”

The tax income to the city would be a welcome boom, Cornell said, with a predicted $200,000 in tax revenue. Last year, the co-owner said they filed $12,000 in tax sales just on CBD and hemp. “And we expect more this quarter.”

Abbey Woodcock, a local business owner, warned the city council that the only people who benefit from opting out are those who sell on the black market.

“The black market dealers will not the commitment [of safe access, adult access, and safe consumption], but they’ll be happy to fill the hole left behind by regulated, taxable businesses,” Woodcock said.

Dee Schaefer said at 64-years-old, she never thought she’d be standing before the city council, speaking in favor of cannabis businesses in her city.

An argument that’s been made against dispensaries and the legalization of marijuana, in general, is the increase in potential DUI charges as people drive under the influence of marijuana.

Schaefer spoke against this argument, saying that people will do whatever they want in the end.

“People are going to drive under the influence, whether it’s cannabis or alcohol. Does this mean we close down the liquor stores?” Schaefer asked the council. “People can go into a liquor store, get in their car, and drink. People go to restaurants and get into their cars after a few drinks. How many of us have done that very same thing?”

Schaefer added that medical marijuana could help people like her with lupus, rheumatoid arthritis, osteoarthritis, and fibromyalgia. “Sleep is an elusive thing for me. The city of Oneida needs this, and I’m a responsible adult. And I’d never get behind the wheel of a car under the influence.”

For people like Jamie Hughes, medical marijuana has helped him overcome and work through his depression.

“I work in retail day in and day out. I make people laugh, but deep down, I get depressed. So depressed that I’ve thought of suicide several times,” he said. “And marijuana has helped me get to a calmer place. People see a complete difference in me.”

Hughes said the benefit of marijuana dispensaries are great, and opting out will provide no benefit to the city.

Hood said the conversation was about dispensaries and not legality, but that having retail dispensaries could lead to increased marijuana use in public.

“Everyone in this room can have five pounds of pot in their house, carry around three ounces on their person, and give three ounces to any person over the age of 21,” he said. “It’s here. And while I hear comparisons to liquor and [dispensaries] to liquor stores, how many people do you see drink outside the store and then get in their car? It doesn’t happen normally.”

Hood argued that while there are laws in place that prohibit someone from drinking in public, there are no laws preventing people from smoking marijuana in public.

“There’s no open burning for marijuana,” he said. “Any place you can light up a cigarette, you can smoke pot. You can smoke pot in a little league parking lot.”

Overall, Hood argued that this would encourage smoking outside of dispensaries.

After the meeting, Mayor Helen Acker said that if the city council decided to opt-in, she would like to see something done to keep dispensaries zoned in a specific area, such as the commercial area of Route 5.

Until then, Acker said she’d like to see the numbers and the experiences of other municipalities before she’d commit.

“I don’t think we have enough information,” she said.

The city council received and placed on file the proposed 2022 City of Oneida Mayor’s Budget and scheduled a public hearing for Nov. 16 at 6:30 p.m. in the Common Council Chambers.

Although the budget was not yet released publicly, Acker said her budget proposal has no tax increase. The mayor added that she would go more in-depth on the proposed spending plan at the first public budget workshop on Wednesday, Nov. 3 at 6 p.m. in the Common Council Chambers.