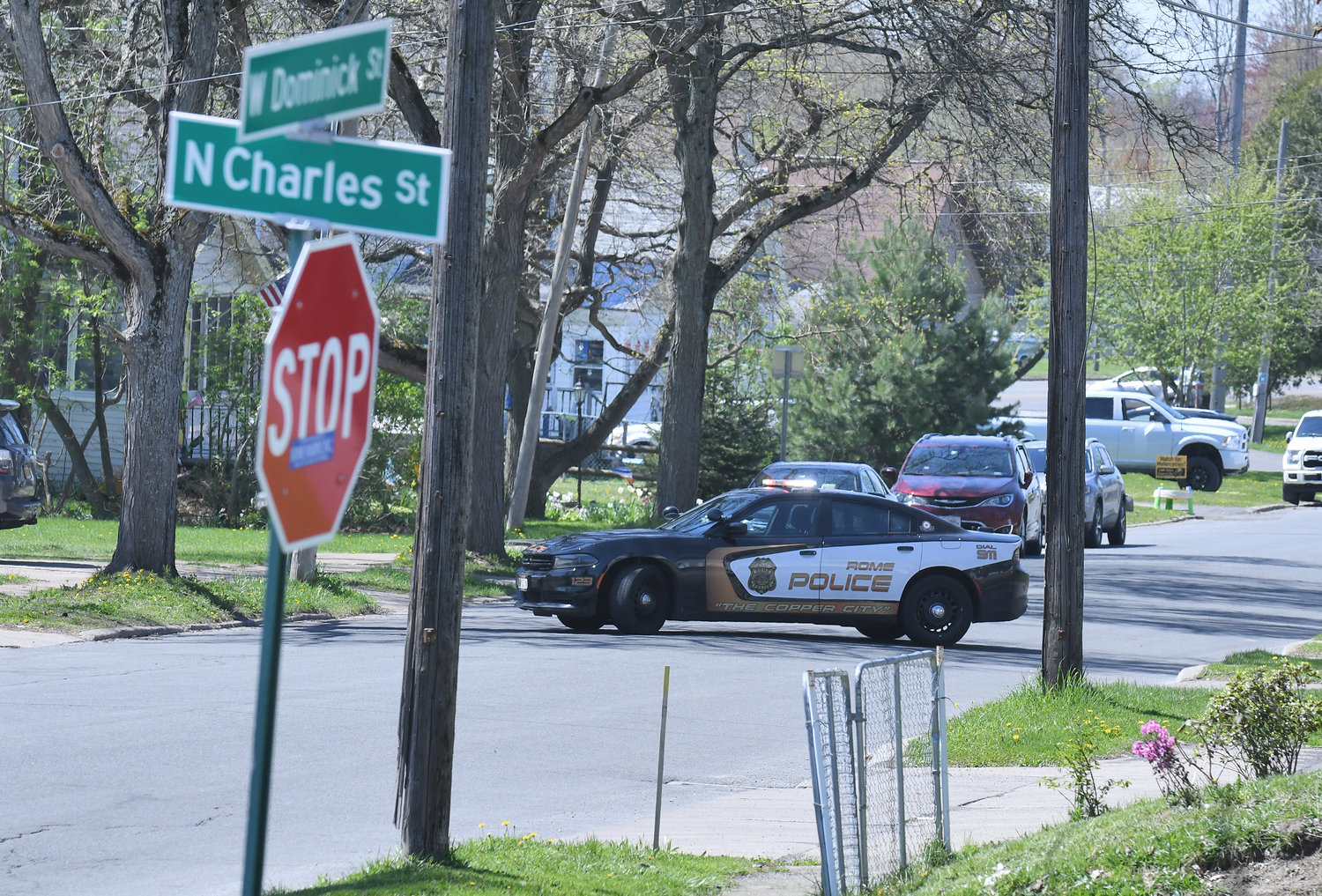 Rome Police investigate a shots fired incident on West Dominick Street, between North Charles and Watson streets, Tuesday. The incident was the topic of neighbor complaints made about different incidents and reports about suspicious activity in the area before councilors at Wednesday’s Rome Common Council meeting.
(Sentinel photo by John Clifford)
Posted Friday, May 13, 2022 6:30 am
Nicole A. Hawley
Staff writer
email / twitter

ROME — Two West Dominick Street neighbors who live in the vicinity of a shots-fired incident earlier this week where a 19-year-old was charged asked city officials for help in their “unsafe neighborhood” during the public comments period of Wednesday’s Common Council meeting held in Council Chambers of City Hall.

Robert Aldrich, 1011 W. Dominick St., told councilors it was about the third time in the last year there has been a shots fired incident in the neighborhood.

“Luckily no one was hurt. You have a young child who lives in that house and I haven’t seen Child Services come in — they don’t do anything,” said Aldrich, referencing the targeted house of Monday and Tuesday’s incidents.

According to a story published in the Daily Sentinel Wednesday, police said 19-year-old Ernest H. Fancher Jr. was charged for the second time in two days after firing a gun into the air on West Dominick Street Tuesday afternoon. The shots fired were part of a series of harassment incidents against some residents on West Dominick Street, police stated.

At about 11:30 a.m. Monday, police said they were also dispatched to the 900 block due to a reported threat on social media, where Fancher was found approaching the same residence while yelling and harassing the people who lived inside.

“There’s always a strong odor of marijuana around there, I’ve been woken up at 3 a.m. because they have loud parties there on welfare payment days,” said Aldrich. “I’ve called the police and City Hall about this property several times. I called the owner and informed her of the drug problems, the fighting and the different people who move in and out, which happens often times with rental property, but nothing seems to be done.”

Aldrich also referenced broken windows on the house he referred to as either 1007 or 1009 W. Dominick St., seeing there is no number listed on the property. There is also a dilapidated porch, and the grass has not been mowed at the rear of the blue house, he said.

“This house shouldn’t be deemed livable and it’s depreciating the value of homes in the whole neighborhood,” Aldrich said. “I had hoped City Codes would’ve acted on this a long time ago, so today I come and ask if someone with authority in the city do something about this problem — do something to fix it.”

Neighbor Roger Wayne, 1012 W. Dominick St., had similar complaints to Aldrich and said problems began at that house and in the neighborhood prior to the COVID-19 pandemic when tenants were under eviction protections. He said he and his wife have noticed problems growing in the neighborhood over the last three years or so.

“We’ve called the police over the last three years because we’ve been woken up by parties with loud music blasting, people dancing in the street and different cars going in and out. I will call the Mayor’s Office and leave a message at 2 a.m. and say this is what’s happening again and once again I was woken up by the neighbors across the street,” said Wayne. “According to the police report on the news, they said a suspect that’s 19-years-old fired shots in the air and in our neighborhood, there’s at least a dozen kids under the age of 18. Where do these bullets go? God forbid they strike one of these dear children.”

Throughout the winter, Wayne said he also noticed at least one broken window on the house, there’s always suspicious activity happening nearby and a broken down BMW has been sitting at the property for at least three years, with a broken down Ford suburban left there prior.

“It’s so bad, even the guy who lives on the street behind me will come over and ask, ‘What’s going on at that house over there?,’” Wayne said. “It’s killing the value of our homes as well. I take care of my house, power wash it...I pay city taxes and my reward is a big black eye in our neighborhood.”

During councilor reports, Third Ward Councilor Kimberly Rogers addressed both speakers and said that she and Fourth Ward Councilor Ramona L. Smith work together on such issues. While Rogers’ ward lies within the south side of West Dominick Street, the house discussed lies within Smith’s ward.

“I sent an email this morning to Public Safety Commissioner (Frank) Retrosi on another house, but I believe it’s related to the house you’re talking about — it’s the next block up,” Rogers said. “But the activity has been affecting several blocks.”

The councilor explained that during COVID property owners were under several challenges while they were unable to evict problem tenants, but that that “doesn’t apply to public nuisance.” She encouraged local residents to make sure they contact police and city officials to inform them when there’s a problem or they spot suspicious activity.

“Without calls and a history of activity, a case for a nuisance property sometimes takes longer,” Rogers said.

Councilor Smith said she had several letters from neighbors concerning the referenced house on West Dominick Street to submit to city officials.

“I realize this is a serious problem and there are issues of concern with this neighborhood,” said Smith. “It will take communication and collaboration with constituents and community members, and working with the administration and police, so we are all on the same wavelength. So, we do understand this is important. We always talk about quality of life in the city and this needs to be more than just a pairing of words. I talked with the mayor today and the police department, and they all take this issue extremely serious.”

As for the area where the shots fired incident occurred, “They (police) have cars there all day, and they have some officers on foot patrol every couple of hours so people in that area see a police presence there,” she continued. “Rome Police are working to see what they can do.”

Smith then called for a review of the local nuisance law to see if something can be done to speed along the process for nuisance property complaints.

“No one in the area is forgotten,” Smith said. “We will continue to work on it, and please continue to call me and keep me updated so I know what’s going on. I want all of us to work together.”

The following resolutions and ordinances were unanimously approved during the meeting:

• Resolution 52 authorizing Mayor Jacqueline M. Izzo to enter into agreement with the county on the Workforce Development Internship Program. The agreement would result in the creation of the Oneida County College Student Corps Internship Program for county-based college and trade school students to be matched with employers in their fields for employment and mentoring at a pay of $13.20 per hour for 200 hours.

• Resolution 53 authorizing an intermunicipal agreement for Rome’s participation in the Juvenile Aid Program.

• Resolution 54 authorizing an intermunicipal agreement with the county for roadside mowing to be provided by the city for a reimbursement of $7,403.50 for a term running from May 1 through Nov. 1 of this year.

• Resolution 56 authorizing the mayor to increase authorized spending to Resolutions 125 and 181, adopted back in 2019, to include $90,000 in city funds due to cost increase overruns in programmed construction costs.

• Resolution 57 authorizing the mayor to enter into agreement with the county for the city’s Municipal Recreation Program at $3,000 for the 2021 program year.

• Resolution 58 authorizing an amendment to the general city budget in the amount of $200,575 for the increase in Consolidated Local Street and Highway Improvement Programs (CHIPS) monies, particularly of the Pave Our Potholes (POP) program, which was approved with the 2022-23 city budget.

• Ordinance 9517 authorizing the closing of a portion of North James Street on May 30 for the city’s Memorial Day program.

• Ordinance 9516 was removed from the table before being unanimously approved at the urging of Fifth Ward Councilor Frank R. Anderson. The ordinance authorizes the issuance of $900,000 in city bonds to finance the costs of various capital projects to include window replacement and other renovations at City Hall, as well as a new boiler at the Department of Public Works building.