Although COVID restrictions have eased over the past year, the continued closure of the New Hartford Senior Center has garnered frustration on both sides of the issue. 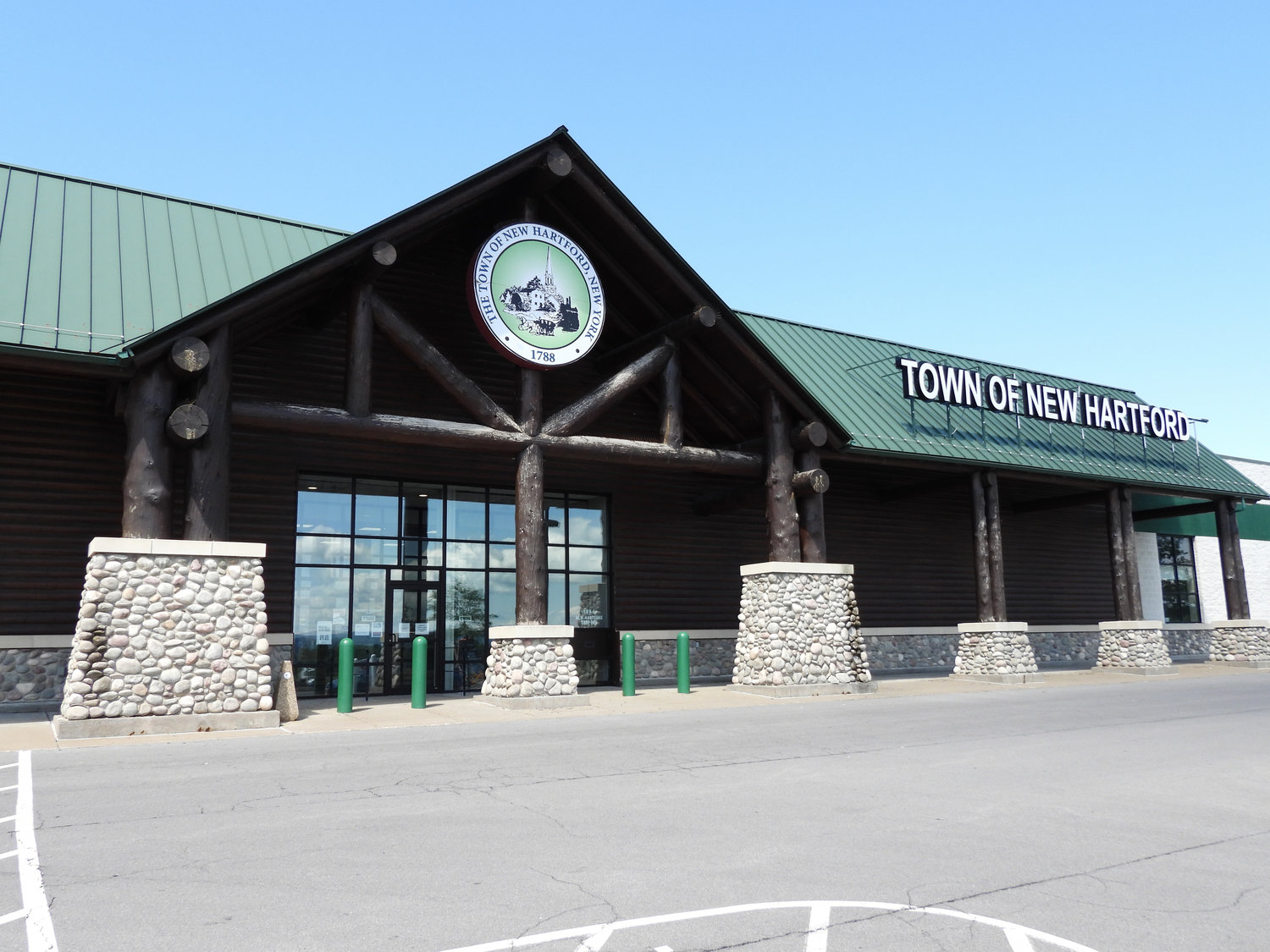 The New Hartford Town Hall, 8635 Clinton St. in the Orchards development, is shown in this recent photo. The site is also the home of the New Hartford Senior Center, whose programming has been closed.
(Sentinel photo by Charles Pritchard)
Posted Saturday, July 30, 2022 7:30 am
Charles Pritchard
Staff writer
email / twitter

NEW HARTFORD — Although COVID restrictions have eased over the past year, the continued closure of the New Hartford Senior Center has garnered frustration on both sides of the issue.

Volunteers, instructors, and attendees of the New Hartford Senior Center have criticized changes to the center, including its move from a central location in the village at St. John the Evangelist Church, 66 Oxford Road, to the town offices in the former Gander Mountain building at 8635 Clinton St.

The move, New Hartford Town Supervisor Paul Miscione said, was one of several enacted by the town to consolidate services and locations for easier access for residents and also to keep costs manageable.

Marcia Cadwell participated at the center for nearly eight years, including volunteering to help the center’s paid staff.

“Paid staff has been doing crucial work, such as planning, bookwork, and monitoring food for things like temperature,” Cadwell said. “And we’ve had paid staff who came in to set that up, the legwork. Volunteers do things like talking to seniors, serving food, and cleaning up. Helping out wherever you can, really. But, as it stands, there are no services. No hot meals.”

Cadwell said there are several individuals who lost their spouses and relied on the center to socialize. “There are people who feel the town board doesn’t care about the seniors, and they’ve been thrown under the bus,” she said.

Sarah Chetnik, who volunteered at the center for two to three years, lamented the center’s relocation but still hoped for it to reopen.

“One of the first problems with the senior center we had was the move,,” Chetnik said. “It’s not easily accessible for everyone to the village, and as far as I know, the town hasn’t considered a bus to pick up seniors in the area. So it put a damper on things right from the get-go.”

Chetnik did her best to help and volunteered at the new location. During this time, Chetnik said she filled out a survey and made her displeasure known that it “... didn’t feel right that there was a budget allocated for the center and it couldn’t be opened.”

Nancy Cox-Marafioti and her husband said the continued closure has been a considerable loss to the community.

For the last three to four years, Cox-Marafioti said she and her husband had given rides to seniors in the area looking to get to the Senior Center. And after a while, the two decided to start attending themselves. “I started going [before COVID-19], and there were a ton of people there in the beginning at St. John’s,” she said. “Around 35 to 40 people came for lunch and stayed for speakers or workshops. But then they moved first to the Willowvale Fire Department. The problem was that it was out of the way, but even then, people were still coming for lunch. But then they moved to [The Orchards].”

After the move to The Orchards, Cox-Marafioti said the number of people who attended started to drop. “It’s hard to get there, and it’s out in the middle of nowhere,” she said. “No one wants to drive that far in their 70s and 80s.”

At the October 2021 town board meeting, Senior Center Representative Marge Anweiler made her frustrations known to the board and, according to the minutes, appeared a “… little upset.”

“We’re there every day and trying our darndest to keep the New Hartford seniors safe and happy, and [the Board] walk in and say we don’t have enough people [attending] and take away a secretary,” Anweiler said at the October meeting. “Carrie is doing the work of three people. I’m doing the work of three people. You took away a secretary who spent his day trying to get our calendar and menu for everybody to have.”

At the meeting, Miscione said that no one was taking away the Senior Center and that the board wanted a plan moving forward.

When Miscione became supervisor, he said the town had already been working to consolidate its assets. “There was police in one building, the highway department in another, the town office in the village, and the Senior Center at the church,” he said. “The consolidation has saved the town a lot of money, and we’ve received a lot of praise for the building. It’s in a nice location, has a big parking lot accessible for the disabled, is safe, is newer, and is in a great central area.”

Miscione said the town had heard from residents upset that the senior center had been moved out of the village. “We made some people happy on one side of town and some people angry on the other,” he said. “It’s tough. We’re told it’s the wrong location, but then what is the right location? We have a kitchen there now, and it’s all on one floor. Before, seniors had to walk downstairs.”

Not too long after the town board returned from COVID-19 in 2021, Miscione said town board members began to discuss lagging attendance at the center.

“The program was spending all this money with six employees and maybe six seniors showing up,” Miscione said, adding that board member Richard Lenart also serves as a treasurer for the New York Mills Senior Center. “And [Lenart] said all around, all the other senior centers are mostly volunteers, or the director got $6,500 for the whole year.”

Officials began conducting a new round of surveys, including center attendance figures.

“Three people on the board said they wanted to come up with a plan and conduct some surveys to create a successful program together; otherwise, it wouldn’t be worth having,” Miscione said. “In reality, it was cheaper to have seniors go to a local restaurant and pay for their lunch. That’s how expensive the reality of the senior center was.”

Still in the budget

When it comes to funds, Miscione said the money for the center is still in the budget and is not being used for anything else. There had been accusations of misappropriation of funds, but Miscione said these statements were false and defamatory.

“The board feels the senior center should be a worthwhile program, and all that employment for just a few people to show up was not cost-effective for the residents,” Miscione said. “And we had a full-time director [who retired in 2019] that was there for many years. So that was a lot in employee benefits. And that was costly.”

Miscione said the decision to open or close the center remains a board decision.

“There are five people on the board, and there were three votes against opening the senior center,” he said. “The town board closed the Senior Center when Oneida County COVID-19 numbers spiked. And after that, the town board refused to open it, and we don’t have the votes to. So it doesn’t matter if I say, ‘Yes, we want to open the Senior Center,’ it will remain closed until the board votes to. And that’s town law.”

“I’m strong for the senior center as long as it’s productive for everyone, and there are many residents who get a benefit out of it,” Miscione added.

Suzanne Crawford is a Zumba instructor and had been teaching at the Senior Center on and off since November 2019. “The issue I feel is the Senior Center is constantly being shut down,” she said. “During the COVID-19 situation, that was understandable. But now it feels COVID-19 was an excuse to shut down after there was any uptick in cases.”

Crawford said the class offered seniors a crucial opportunity for both exercise and socialization. “I had a large group of ladies come every single week,” she said.

“There was a big stir with everyone when the kitchen closed,” Crawford added. She had been keeping in touch with her classes after the closing. “There are plenty of seniors out there that want something to do. They have a huge space, and it’s going unused, and it’s unfortunate. There’s a lot who would benefit from it.”

Miscione said he doesn’t see the center reopening without both a plan and a point person.

“We don’t have the employees or volunteers to run it,” he said. “And we need the right person to spearhead the project and run it correctly. And we don’t have it. We have the committee, but we need someone there willing to take control.”