They’ve become a hometown sensation and it’s not often that you don’t see the two together — whether it be grocery shopping or browsing through books at Jervis Public Library. 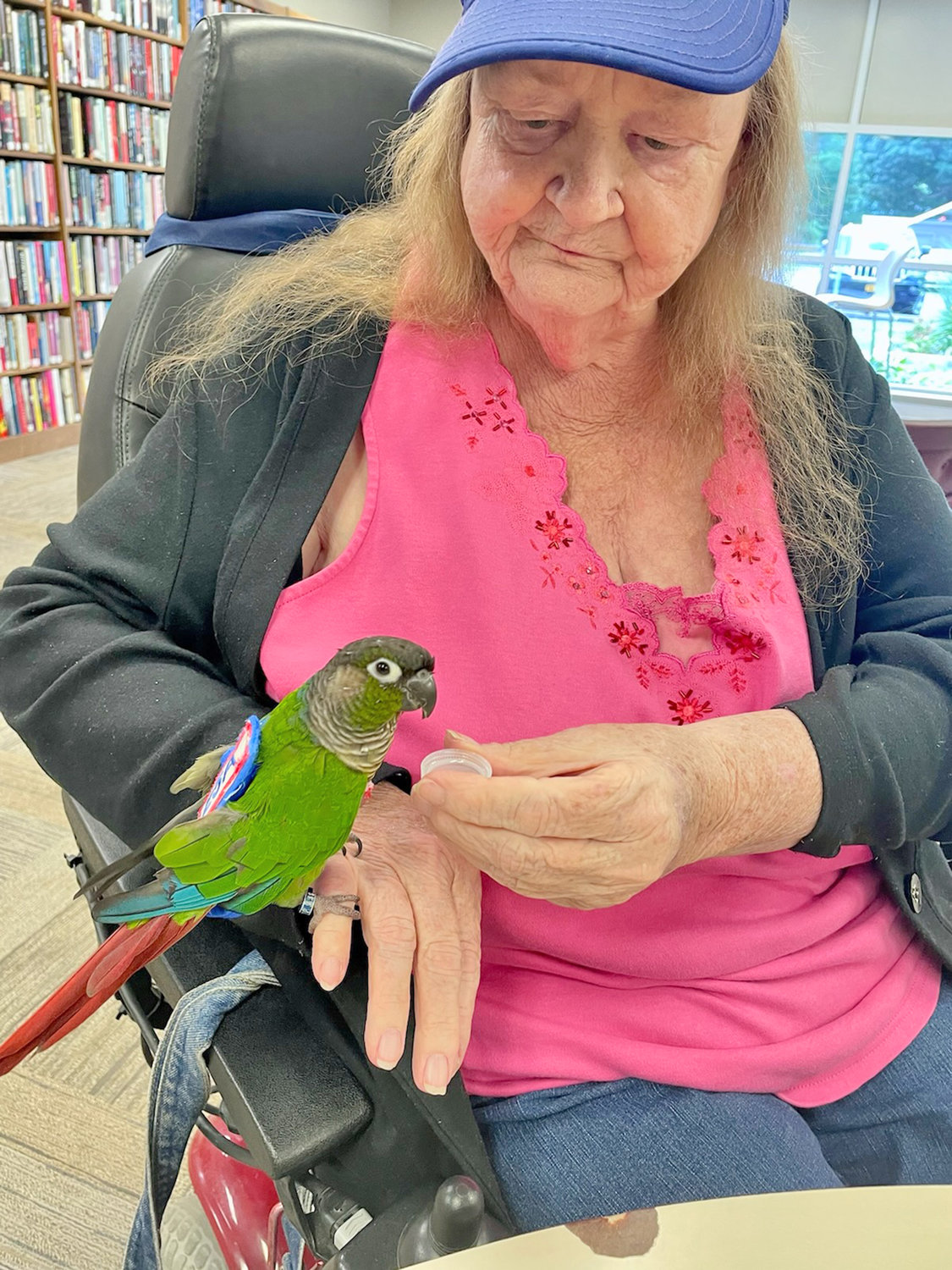 Marsha Moreland, of Rome, gives her green-cheeked conure, Sky, a drink of water while visiting Jervis Public Library on North Washington Street. Sky is a registered Emotional Support Animal and has come to Moreland’s assistance on several occasions.
(Sentinel photo by Nicole A. Hawley) 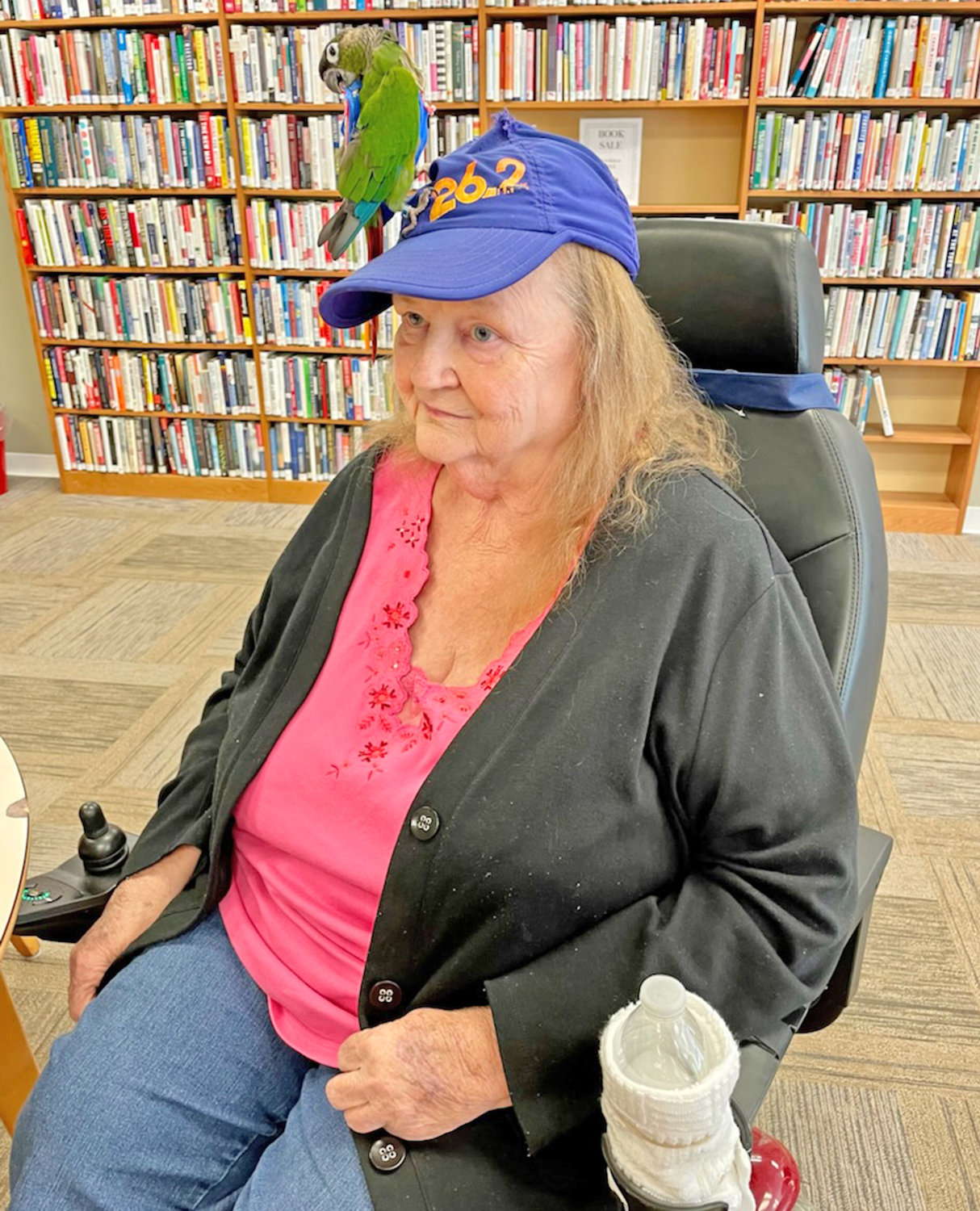 In between pecks of Marsha Moreland’s ball cap, Sky the green-cheeked conure, tugs at her Emotional Support Animal vest. Sky wears the garment, which acts like a diaper, so that she can travel with her owner and not have accidents.
(Sentinel photo by Nicole A. Hawley) 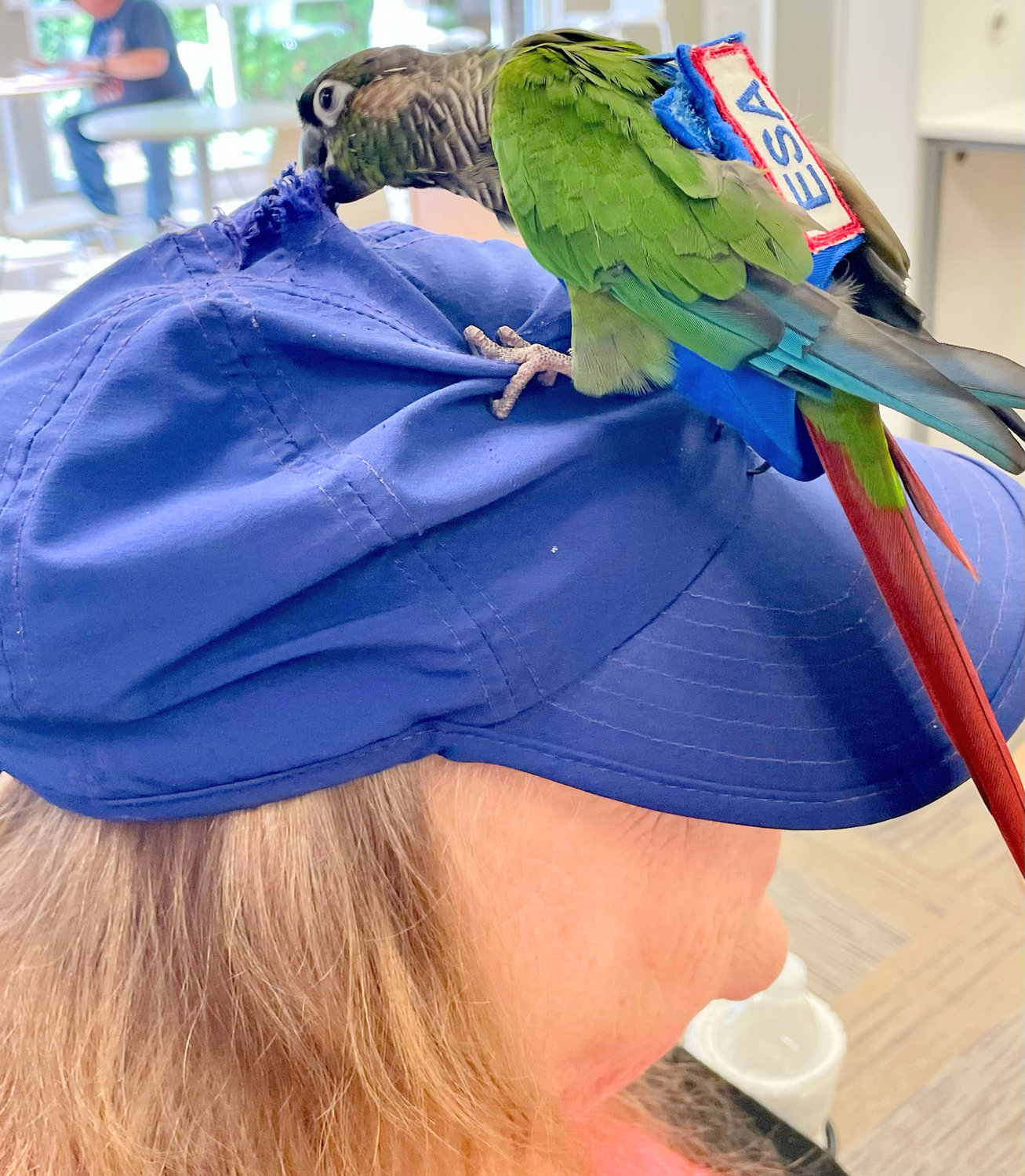 ROME — They’ve become a hometown sensation and it’s not often that you don’t see the two together — whether it be grocery shopping or browsing through books at Jervis Public Library.

Marsha Moreland, of Rome, and her green-cheek conure parakeet, Sky, have people throughout the city stopping them to take a photo or two wherever they go.

Sky is not only special because her breed has experienced a drastic decline in the wild, but she has also helped her caretaker through some harrowing situations, deeming her registration as an Emotional Support Animal.

Moreland explained that she took in Sky about six years ago when a friend, Mary Brown, had the parakeet for about three months but was unable to keep her.

“Mary said she ended up being allergic to Sky, and that she wanted to find her a very good home,” Moreland recalled. “We (she and husband, Roger) had just lost our bird, and Mary asked if we’d foster her until she could find her a home. We called her back in 20 minutes. Mary asked, ‘Are you guys taking her?,’ and we said, ‘Yes.’ She’s been with us ever since.”

Sky’s breed is “usually from Mexico and South America — so she’s an expensive bird — and I read in a book that they’re starting to get endangered,” said Moreland.

The parakeet mom said she doesn’t know how old Sky is, and local veterinarians have been unable to read her leg band.

Because green-cheeked conures are highly affectionate and love their owners intensely, they need an owner that is able to give them a great deal of time out of the cage.

And that is most definitely the case for Sky.

“It’s very rare that I go anywhere without her now,” Moreland said of Sky. “She even eats with us — she has her own feed — and she gets treats like apples and other fruit.”

Moreland, who uses an electric wheelchair, explained how Sky actually rescued her from a very scary situation. Marsha said she was trying to open a manual wheelchair in their home, while husband Roger was in the master bedroom at the opposite end of their trailer. As the seat was coming down the bars slid, and Moreland explained that the pointer and middle fingers of her left hand became wedged between.

“It started to cut my fingers and I yelled for Roger, but he couldn’t hear me from where I was,” recalled Moreland. “Sky actually went to Roger said said, ‘Daddy! Daddy!,’ and Roger said, ‘Sky, what is your problem?’ Sky answered, ‘Mommy! Mommy!,’ he got up and then he could hear me yelling, ‘Roger, my fingers — my fingers!,’ And he came running and stopped the chair. It was pretty scary, and if it hadn’t been for Sky waking him up, my fingers may have been sliced off.”

That’s not the only time Sky helped save her mom. And Moreland learned the “tiger” her parakeet could become when trying to protect her family.

Marsha and Roger were attending the State Fair in Syracuse last year when Marsha fell while using the restroom, and was unable to get up on her own.

“Sky got very protective and feathered up with her beak going, walking up and down my arm as people were trying to get into the stall to help,” Marsha explained. “You had these 6-foot guys who would try to step in and once they saw Sky, they’d step right out — they were actually afraid of her. Roger had to call for her and say, ‘They are trying to help mommy,’ and she finally came to him so the guys could come in to get me. At least I can laugh now that these big, 6-foot guys were afraid of this little bird. She is a tiger.”

Because of her heroic feats, Moreland said she had Sky registered as an Emotional Support Animal. According to the ESA Registration of America, “Yes, you can certainly choose a bird as an ESA. These feathered friends can be excellent sources of support for mental and emotional concerns. They will not need any additional certification or training – just a letter from a mental health professional.”

Once registered, Sky received her diaper “backpack,” so the parakeet can visit any establishment where she’s allowed, without having to worry about any accidents.

Besides jumping in front of her mom’s grocery cart at the store and squawking, “Well, come on!,” the parakeet enjoys visiting her local library and the occasional trip to McDonald’s, which is one of her favorite spots.

It was during a shopping trip to Boscov’s department store at Sangertown Square Mall in New Hartford that Sky made a big impression, and a special friend as well. Moreland explained that one of the store employees took quite a liking to Sky, and chose to purchase a parakeet for her autistic son as a pet.

“She explained to me that her son doesn’t really look at or speak to anyone. She told me she’d love to get a bird like Sky for her son, but that they are very expensive,” Moreland remembered. “So the next time I went to the store I saw her again. She went up and gave Sky a big pet, and said, ‘Thank you for introducing me to Sky.’ She mentioned that she did end up purchasing a parakeet for her son, and she said, ‘It was the first time my son came out to me.’ She said, ‘My son said, ‘I love my birdie, mommy. I love you mommy.’”

Moreland continued, “She said it was amazing. Her son is 7 or 8-years-old and he never spoke those words to her before.”

The story was proof, Moreland said, that Sky can not only spread her feathers, but also the love.

“Sky did a good deed, and I don’t know what I’d do without her either,” she said.