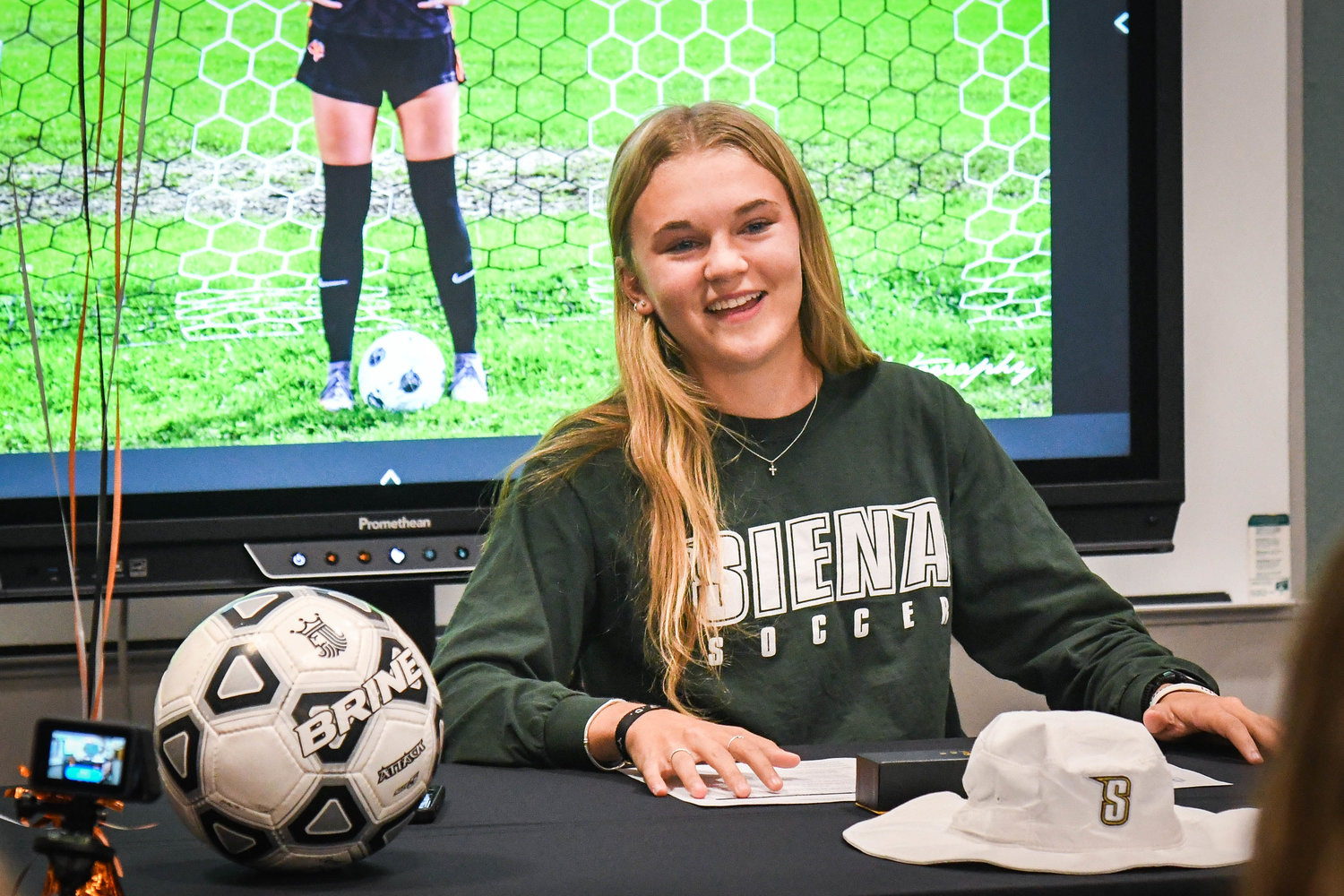 The Remsen senior turned in an impressive season as a versatile forward with the girls soccer team during a standout three-year varsity career with the small Section III Class D school. On Wednesday afternoon, surrounded by her family – father, Dale, is Remsen’s longtime athletic director and sister, Jade, is an athlete at Utica University – as well as teammates and the boys soccer team, Dening signed her National Letter of Intent to join NCAA Division I Siena College on Wednesday. The team competes in the Metro Atlantic Athletic Conference.

She said there was a surreal feeling in addition to some tears as her career was highlighted by her father and coach Jim Wilder during a short ceremony that included about 50 people.

“There’s also relief to be committed fully,” said Julia Dening, who acknowledged she had contact with a few schools. “The recruiting process did take a lot. It was a lot of time, energy and focus. I’m glad to be signed and committed to a D-I school.”

Siena, located north of Albany, was “the right fit,” she said.

“It is a small community. So, I love how everybody knows each other there. On my visit, it felt like Remsen. I felt at home,” Julia Dening said. “Whereas on my visit to these bigger schools, I just felt like a number. I didn’t feel like they would know me. I didn’t feel like I belonged.”
Dening joins a small group of Remsen athletes to go on to the Division I level. She is the fourth athlete in the last 25 years – and first in more than a decade – to take a Division I opportunity. She follows 2007 graduate Devin Will (baseball, Stony Brook), 2008 grad Christine Mulvihill (cross country/track and field, Canisius) and 2009 grad Rachel Roberts (track and field, University of Buffalo), according to Dale Dening.

“It makes me feel even more accomplished than if I went to (a bigger high school) because I am one of the select few that has had the opportunity,” Dening said.

Wilder said Siena – which recently finished a 2-11-5 season – is getting a “tremendous person and athlete.” She was a leader on a Remsen varsity team that had five eighth-graders this season, he said. Usually a forward, she sometimes shifted to a defensive role.

“They’re going to get the whole package,” Wilder said.

This season, Dening scored 43 times, which is 86% of the total goals for Remsen (9-8 overall). That includes her 100th career goal on senior night against West Canada Valley on Oct. 7.

Her 43 goals are believed to be the second-most among Section III girls players this fall.

She had some impressive efforts, totaling six goals Sept. 29 against Old Forge before notching seven in the team’s 8-1 win over DeRuyter in a first-round sectional game.

“I went into (the season) with the mentality of ‘we might not have the best team, but you just have to play your own game,’” said Dening, who also participates in indoor and outdoor track and field.

“I just went out and had fun. I wanted to be able to play with my friends. We had a really good season.”

Dening finished with 110 goals over three varsity seasons. She participates on a club soccer team, which she played on her sophomore year when the COVID-19 pandemic altered the season.

“My style of play is that I like to be quick,” Dening said. “I don’t try to use too many fancy moves. I try to use my speed to my advantage. … I just like playing multiple positions because it helps me understand the game even more.”