Removal of Mansfield from ZBA on hold

The Vienna town council alleges a Zoning Board of Appeals member has violated the town’s ethics law — but Richard Mansfield’s lawyer says it’s the town that’s violated its ethics law.

Removal of Mansfield from ZBA on hold 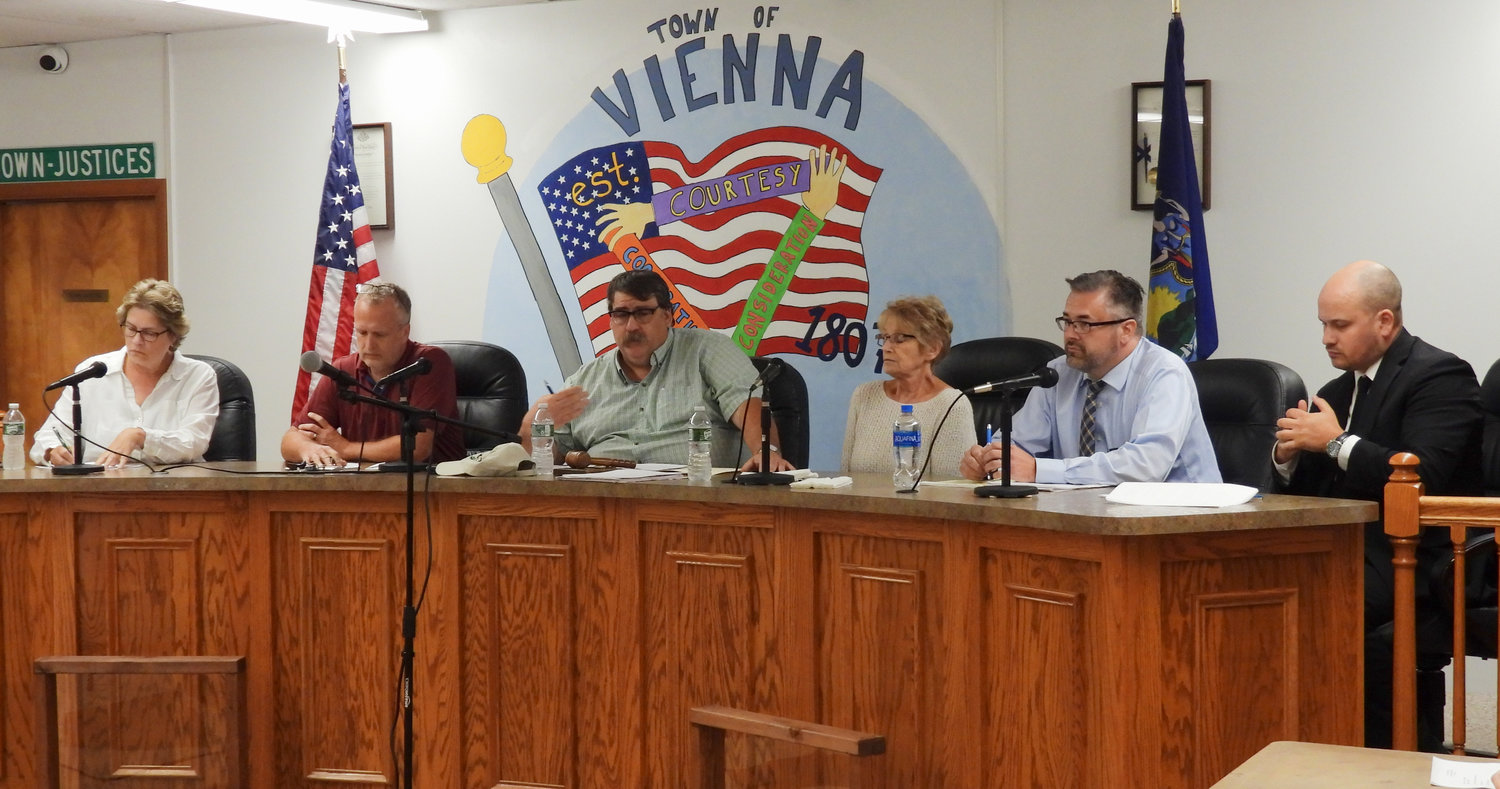 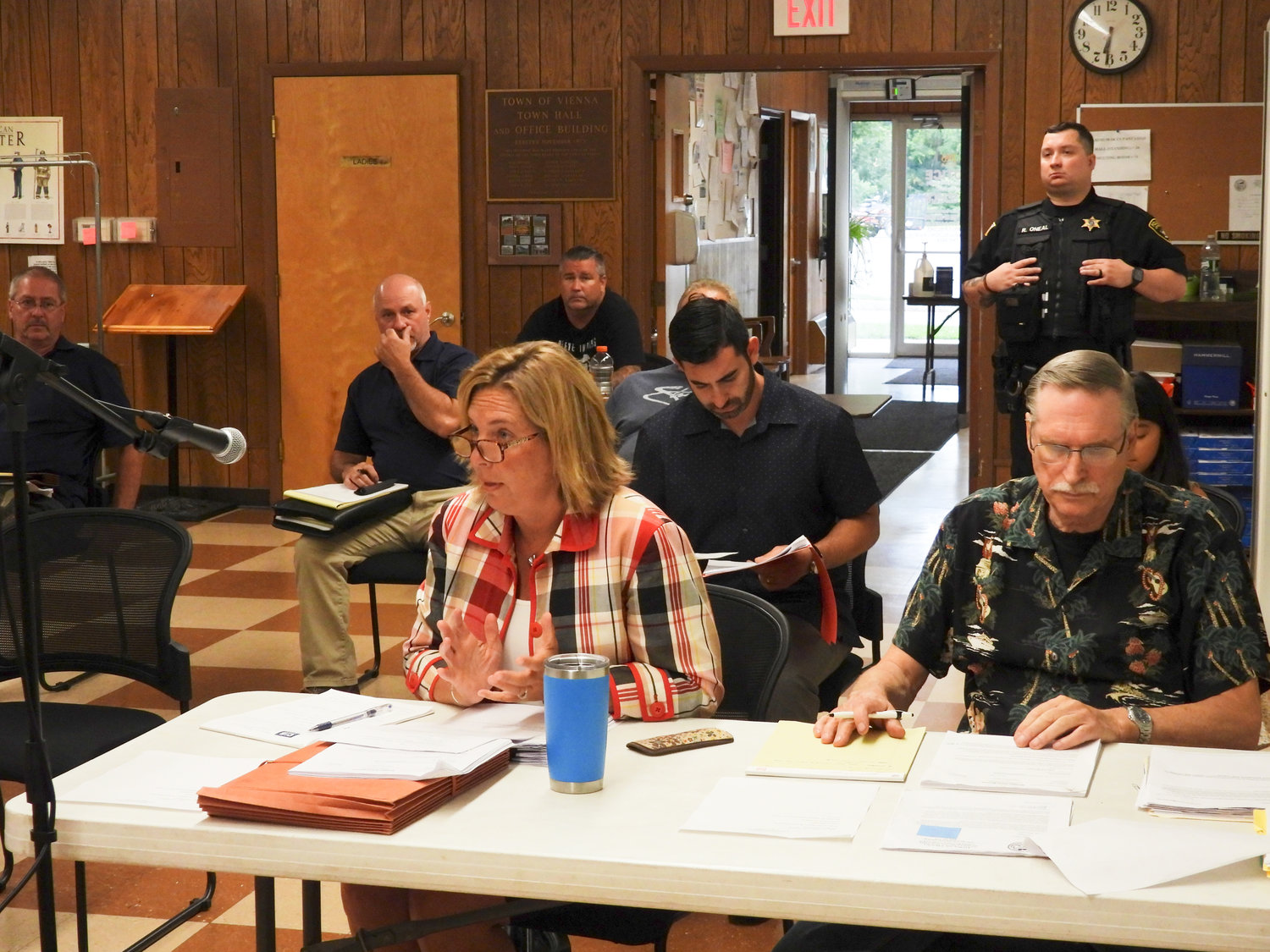 The Vienna Town Board holds a special meeting on Monday, Aug. 15. Richard Mansfield and his attorney Nadine Bell sit before the town board and outline their case, arguing against the grounds for termination from the Zoning Board of Appeals made by the town board
(Sentinel photo by Charles Pritchard) 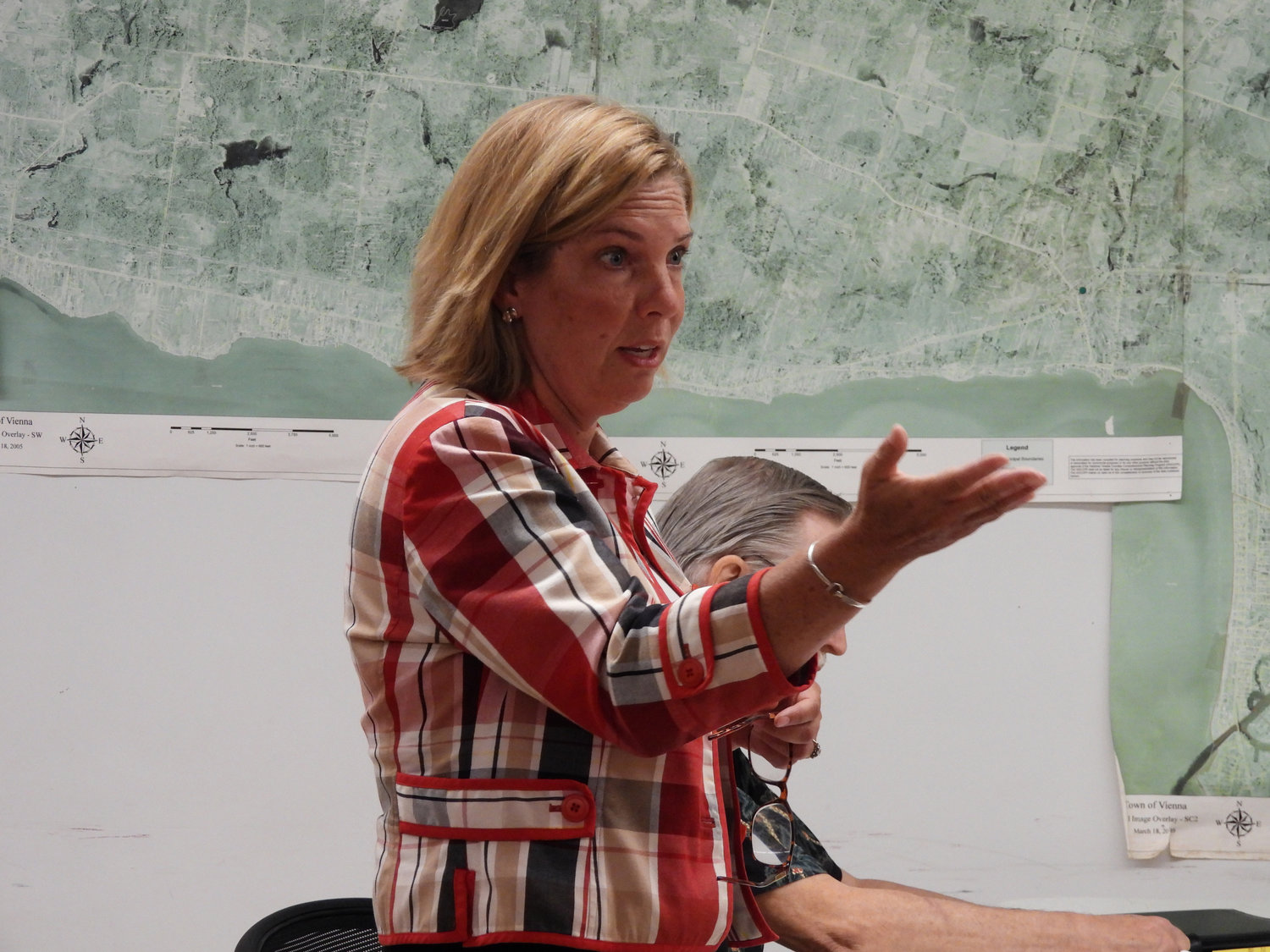 The Vienna Town Board holds a special meeting on Monday, Aug. 15. Richard Mansfield's attorney, Nadine Bell, spoke to the town board and outlined several instances in which she alleges the town violated its own ethics law.
(Sentinel photo by Charles Pritchard) 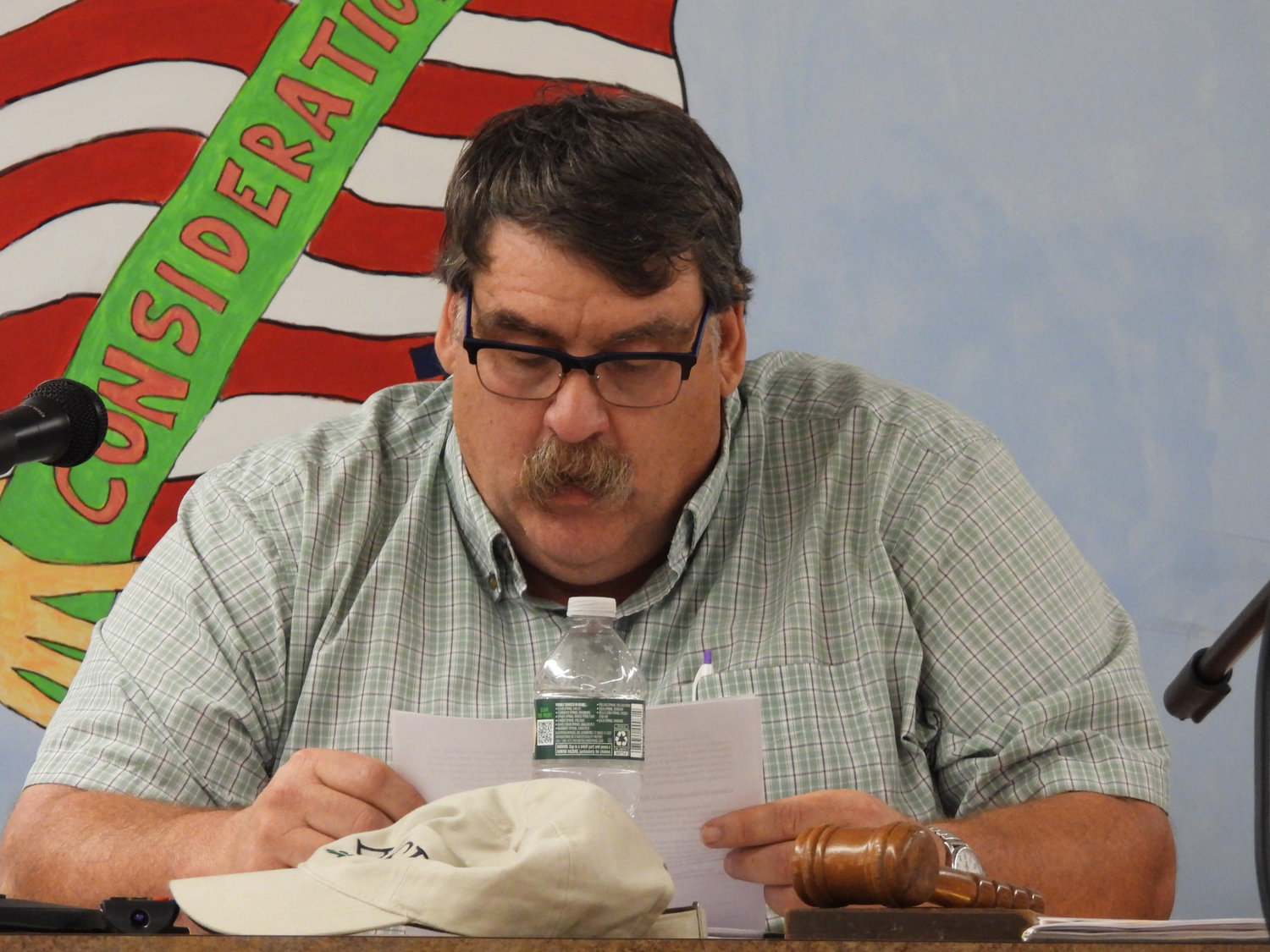 The Vienna Town Board holds a special meeting on Monday, Aug. 15. Supervisor Michael Davis Sr. outlines the grounds for Richard Mansfield's termination from the Zoning Board of Appeals, citing a violation of its ethics law while he serves both the ZBA and the Oneida County Republican Committee and alleged misconduct Mansfield made during a ZBA meeting in November 2021.
(Sentinel photo by Charles Pritchard) 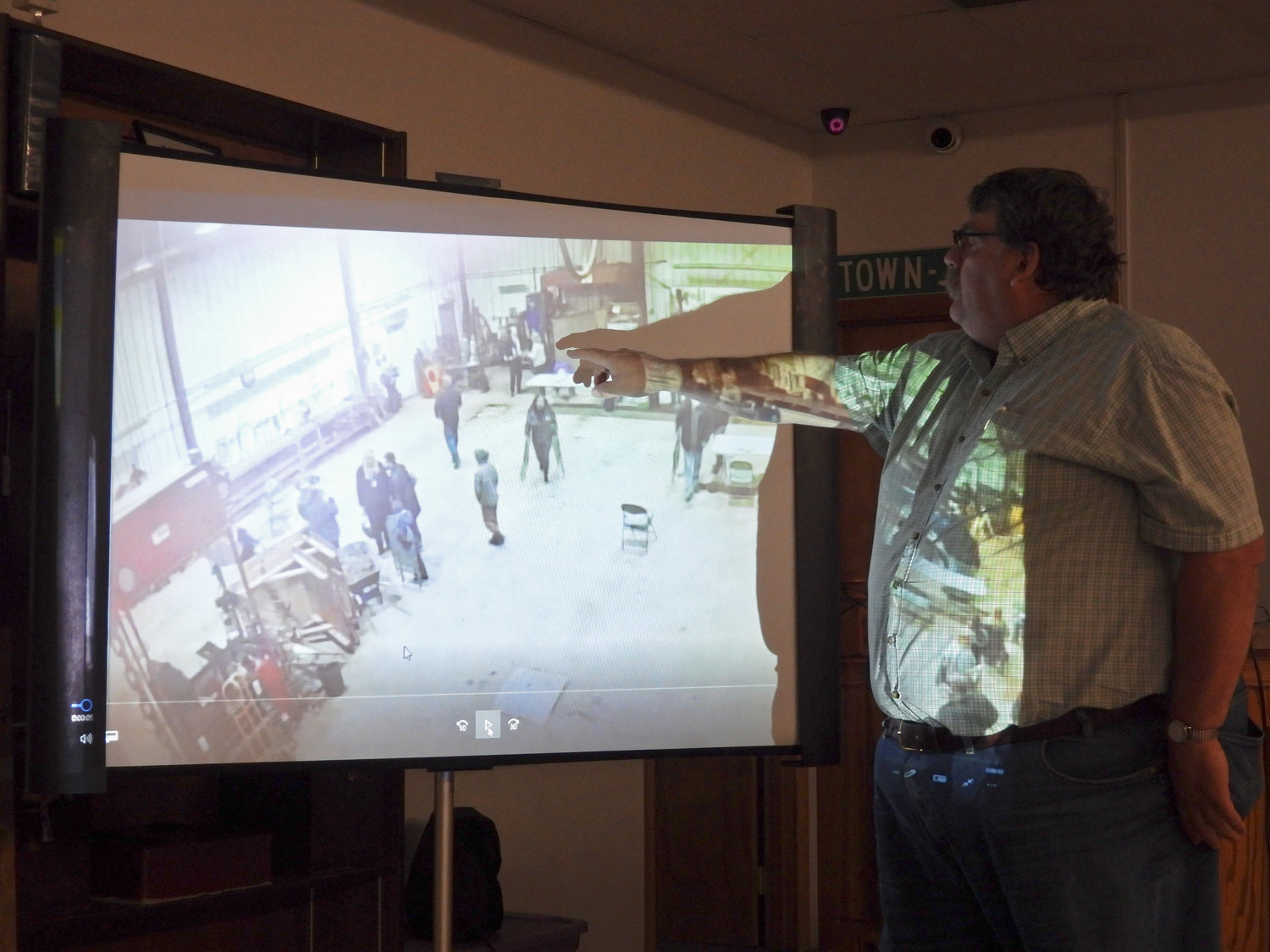 The Vienna Town Board holds a special meeting on Monday, Aug. 15. Supervisor Michael Davis Sr. narrates video evidence of a Zoning Board of Appeal meeting in which after the meeting, Mansfield made remarks to Code Enforcement Officer Reay Walker and Town Attorney Evan Rossi.
(Sentinel photo by Charles Pritchard)
Previous Next
Posted Wednesday, August 17, 2022 6:11 am
More information

VIENNA — The Vienna town council has alleged a Zoning Board of Appeals member has violated the town’s ethics law — but Richard Mansfield’s lawyer says it’s the town that’s violated its ethics law.

A special meeting was held on Monday, Aug. 15, in the town of Vienna, where consideration was being made to remove Mansfield from his position on the ZBA.

Supervisor Michael Davis Sr. laid out two points in which the town felt there were grounds for removal — violation of the town’s ethics law and misconduct during a meeting.

Mansfield was appointed to the ZBA in 2018 by the town board for a five-year term. According to the town’s ethics law, Mansfield or any town employee cannot hold office in any political party or organization. In Feb. 2021, a resident filed a complaint regarding Mansfield’s ZBA position and his position as chairman of the Oneida County Republican Committee. Mansfield said in an email that he has “… been on the committee for 14 years.”

A letter from the ethics committee was sent to the town board on May 3, 2021, which said it had reviewed the complaint of the ethics violation and that there was a violation of ethics law.

The ethics committee recommended the town board review the ethics law and inform Mansfield that he was violating the law as it was written.

“A public officer, employee, or board member shall not hold any office in a political party or political organization,” Davis read from the town’s law. “The town provided you with several opportunities to rectify this violation.”

Mansfield had said he was unaware of the ethics law he was violating, and in response, the town produced a letter signed by Mansfield acknowledging the ethics code and having read it in January 2022.

Davis said a letter had been sent to Mansfield and his attorney on April 7 requesting to resign from the ZBA or discontinue efforts to serve on a political committee.

He goes on to say that an additional letter had been sent on July 6, asking to withdraw from either the ZBA or Committee by July 15.

Mansfield’s attorney, Nadine Bell of Costello, Cooney, and Fearon, argued that while the town says it provided her client with “… several opportunities to rectify this violation,” it instead offered no due process and violated its own ethics laws.

According to the ethics code, the ethics committee has the ability to accept waivers “… where the ethics board feels an exception is of public interest.”

The town received the complaint on Feb. 1, 2021 — reportedly, according to Bell.

“When you look at the complaint, there’s a box in the corner that’s supposed to acknowledge when it was received,” Bell said. “It was never completed. But for the sake of argument, let’s say it’s Feb. 1. Under Section 13-B of your ethics law, it requires the accused to be notified in writing of the complaint and the right to appear before the ethics board. The law says ‘shall.’ It’s not a choice; it’s required. But it did not happen. And we have a violation of the ethics law.”

Bell said the inaction of the ethics committee to notify Mansfield of the complaint and his right to appear before the board violated his right to due process.

On top of this, Bell cited Section 13-E of the ethics law, saying decisions by the ethics board are reviewable by Article 78 in the time allowed.

“When you don’t make someone aware of the decision, you deprive them of the ability to participate in the process or appeal it,” Bell said. “These are basic, elementary due process rights that have been deprived repeatedly.”

According to Mansfield’s attorney, there was also supposed to be a hearing conducted by the ethics board, but Bell said that never occurred. But that was not all.

“We have a May 2021 opinion of the ethics board that the town board should inform my client of the violation and make a change to the ethics law,” Bell said. “Despite receiving that recommendation in May, the town board did not make my client aware of the violation for another four months until September. And under section 9A-2 of the ethics code, any changes in the ethics law recommended by the ethics board must be discussed and acted upon in open session during the regular meeting within two months. That never happened.”

“Applying a law that you, the town, have violated in some capacity is arbitrary and capricious,” Bell continued. “It’s coming to the table with unclean hands.”

The violation of the town’s ethics law isn’t the only grounds that the town is citing for Mansfield’s removal.

There was also an incident at a ZBA meeting regarding Mansfield’s demeanor during the Nov. 10, 2021 ZBA hearing.

In an email Davis had written to the town as a witness to the event, Davis said, “… Mansfield rushed over to [Code Enforcement Officer] Reay Walker and Rossi and tried to pick a fight with them. He was using threatening language and aggressive physical posturing. First, Rey received the brunt, but then Mansfield shifted his attention to Rossi.”

While Davis said in his email that Mansfield was using threatening language, he later said in the email that he was “… too far away to hear exactly what he said to Rossi.” Davis finished by saying that if the situation had not been defused, he believed it would have escalated to physical violence.

A letter from Rossi had been received, where the town attorney says Mansfield approached and made threatening remarks and kept walking towards him and Walker. “I don’t really remember every word, but I remember him saying to Reay ‘… you think you’re a tough guy. That shit doesn’t work with me.’ and stated, ‘I don’t like you. You need to stop talking about me and making statements about me.’ Then, after a few more rude remarks, he walked away. I don’t understand what was going on with him. But there could be a mental issue we’re unaware of.”

A video was shown where one could see someone fitting Mansfield’s height and build walking toward two individuals identified as Walker and Rossi. The one identified as Mansfield in the video is seen engaging in a heated conversation with the other two.

Bell said Davis’s recounting of events has him identify what was said as threatening but couldn’t hear what was said. Bell challenged this, to which Davis noted, “… I suppose when two people were trying to back away from [Mansfield], they weren’t hearing about his favorite pancake recipe. It was obvious they were fearful.”

Bell continued and said Rossi’s statement didn’t include any allegations of threats of physical violence.

“[But] he ends the email with a statement that there appear to be a ‘… mental issue going on,’ which is at best inappropriate and at worst flirting with defamation,” Bell said. “And none of it was during a public meeting. It was all after the fact.”

Bell submitted a letter into the record from former Supervisor William Graham, reprimanding Mansfield for his actions during the meeting and that he was at risk of violating the code of conduct.

“The town addressed it and then issued a letter,” Bell said. “And then, nine months after the incident, after a letter was issued, the town uses this as grounds for termination.”

And on top of this, Bell said that Mansfield was approached by the town to serve on the Comprehensive Planning Committee during all of this.

“While you’re trying to remove him for cause, you’re then soliciting his help on a committee,” she said. “How is that not capricious and arbitrary?”

After both sides presented their case, the public hearing was opened, and people were allowed to speak for five minutes.

Pat Duggleby said he had to resign from the ethics board when he was appointed to the planning board.

“And there was no waiver [process],” he said. “It was one or the other, pick your choice [and resign.] I don’t know if it’s been rewritten since. And if you haven’t rewritten the code of conduct, which came out years ago, it wasn’t whether you raised a hand or voice; if you got in someone’s face, then that was considered inappropriate conduct, and you were gone.”

Steven Piacentino, a member of the Oneida County Republican Committee, said that according to New York State Election Law, somebody on a political committee is not considered a public official and that the law would refer to someone holding office for something akin to a PAC or Super-PAC.

“According to the New York State Board of Elections, a person elected to a county committee position is not considered a public official,” Piacentino read from a letter sent to the BOE enforcement officer. “It is not serving in two positions. You may serve on a political committee and serve the town.”

At the end of the meeting, the board decided to review the information provided by Bell and return at a later date with a determination.