The popular Boilermaker Road Race is ready to roll through the Utica streets this morning. 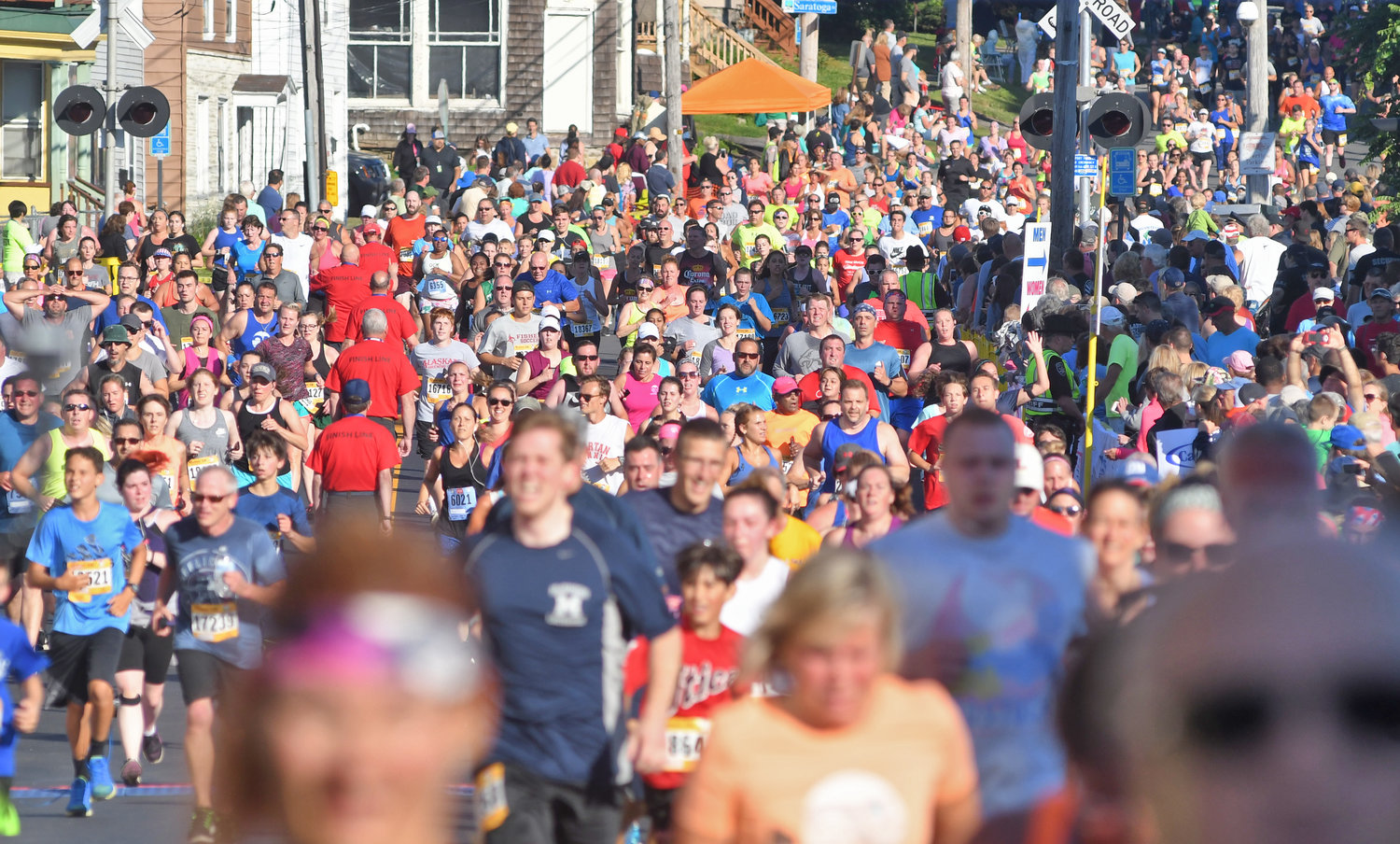 Boilermaker Road Race participants make their way toward the finish line on Court Street in 2018.
(Sentinel photo by John Clifford) 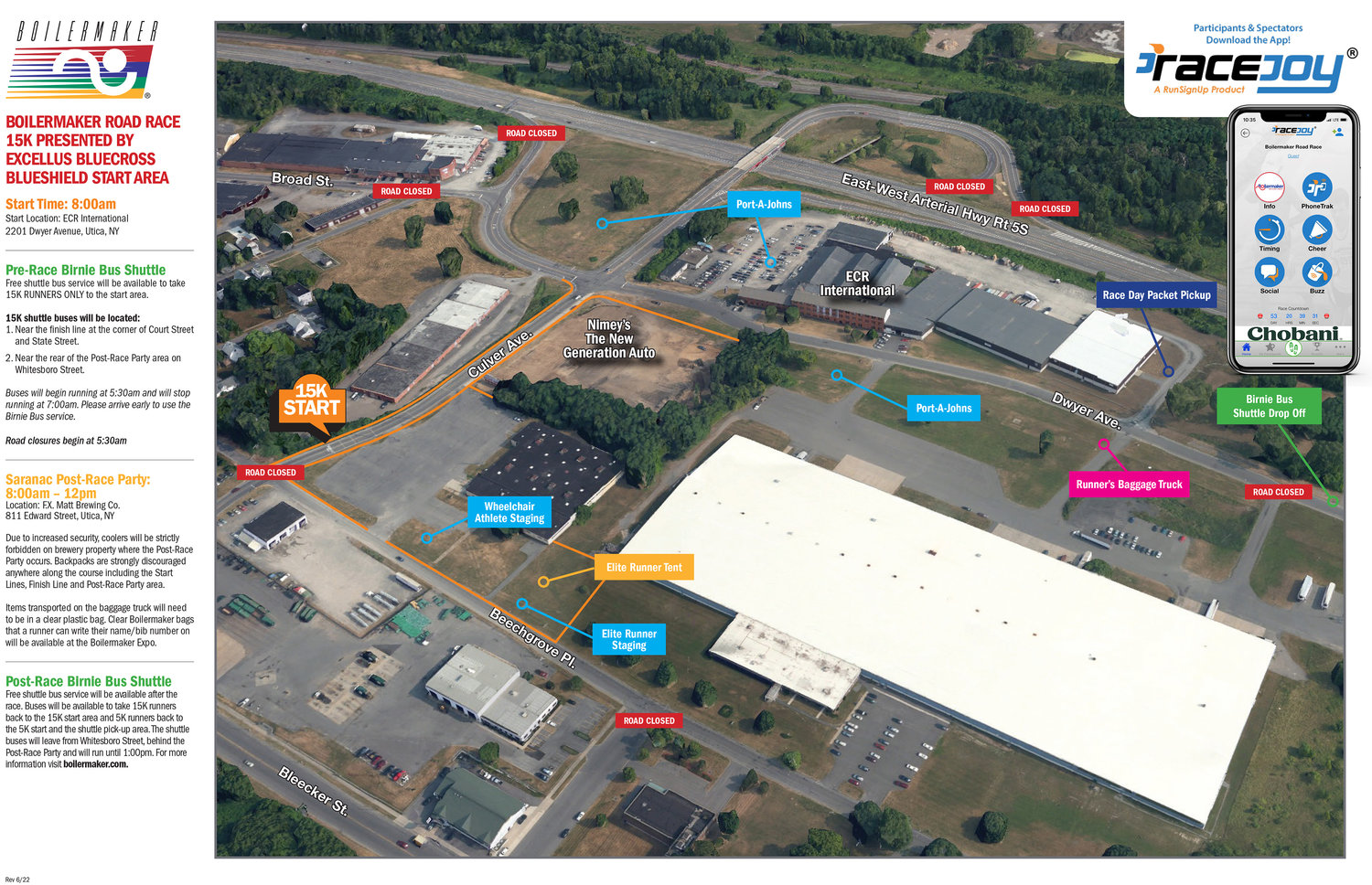 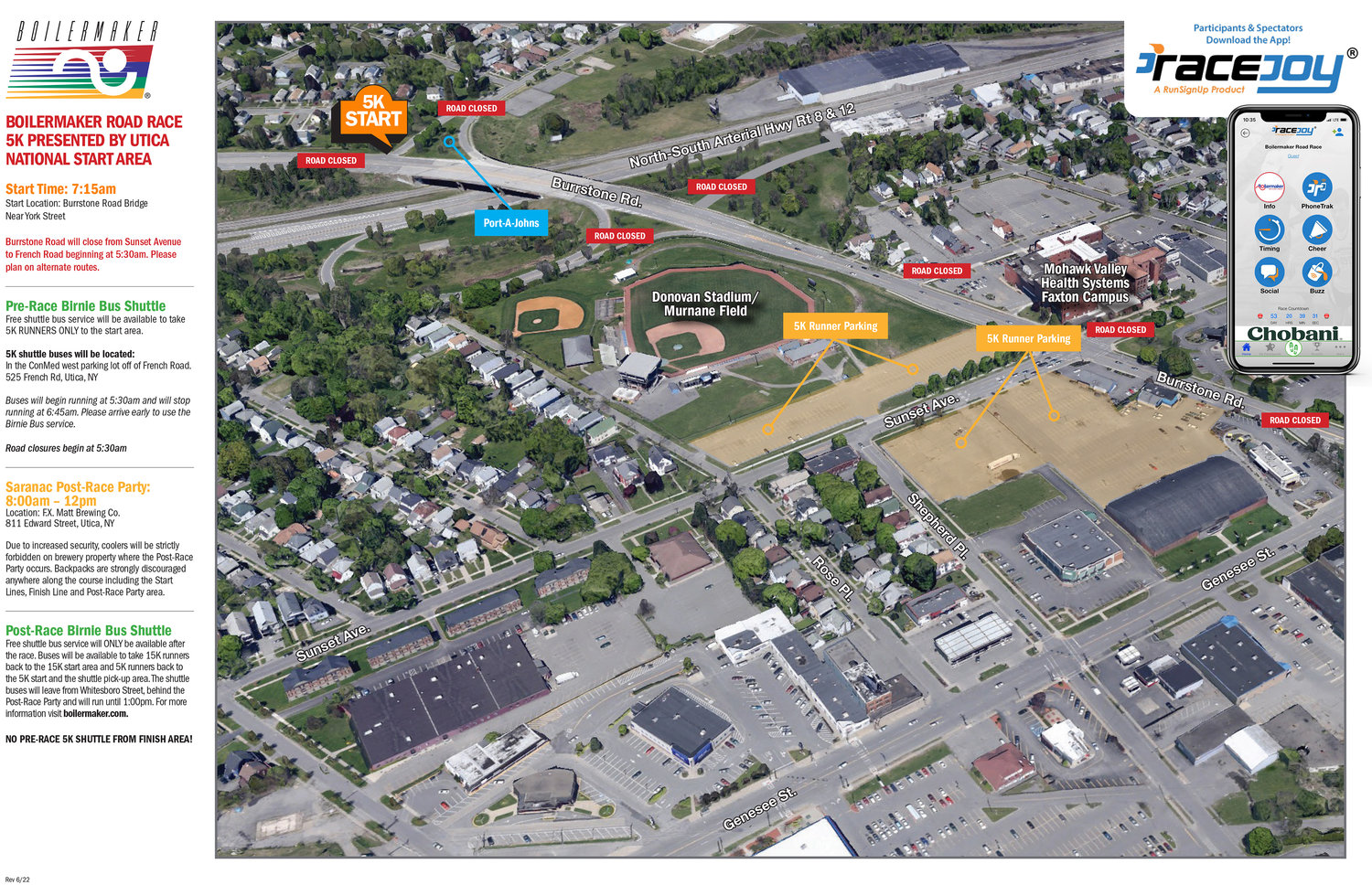 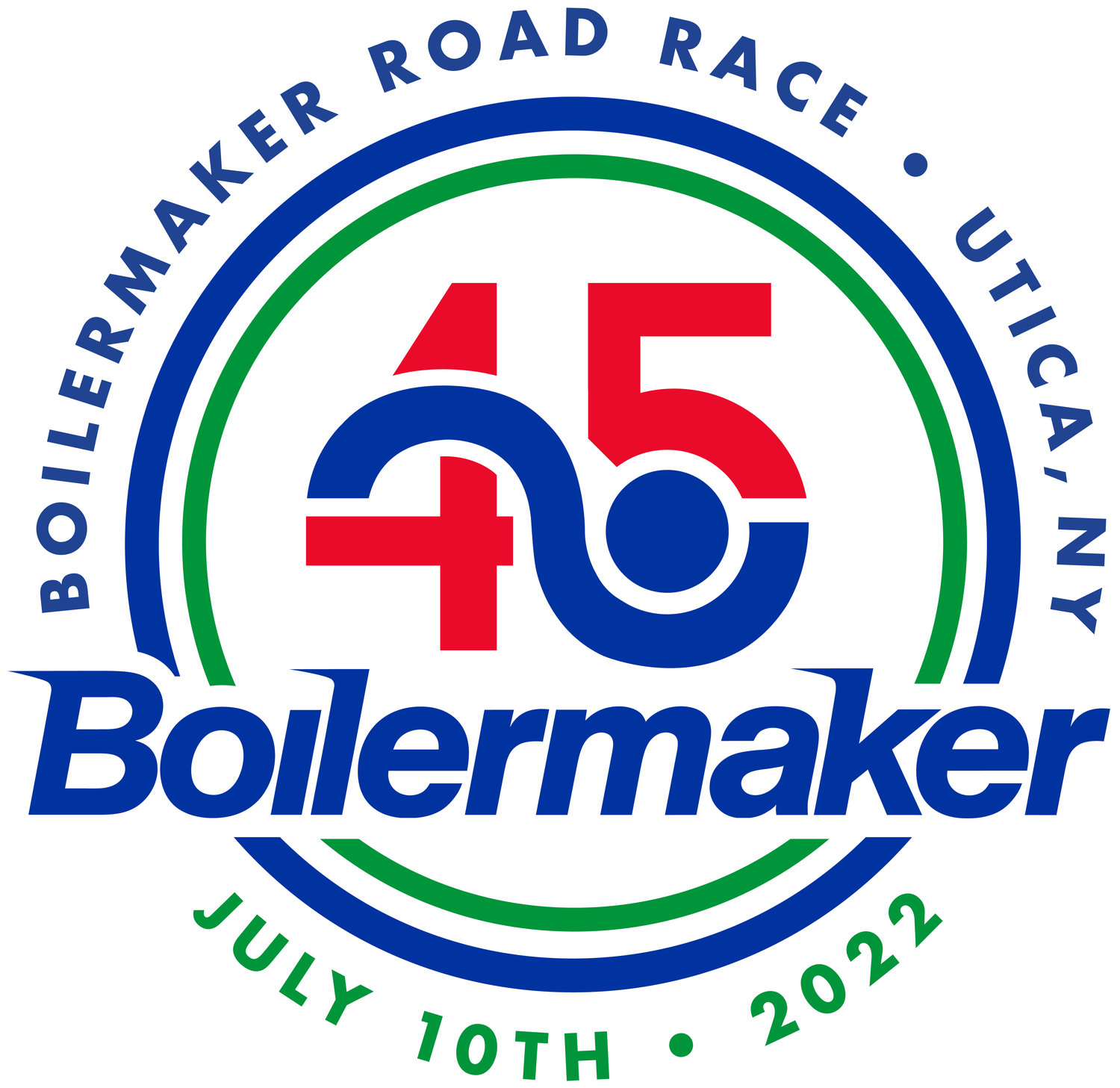 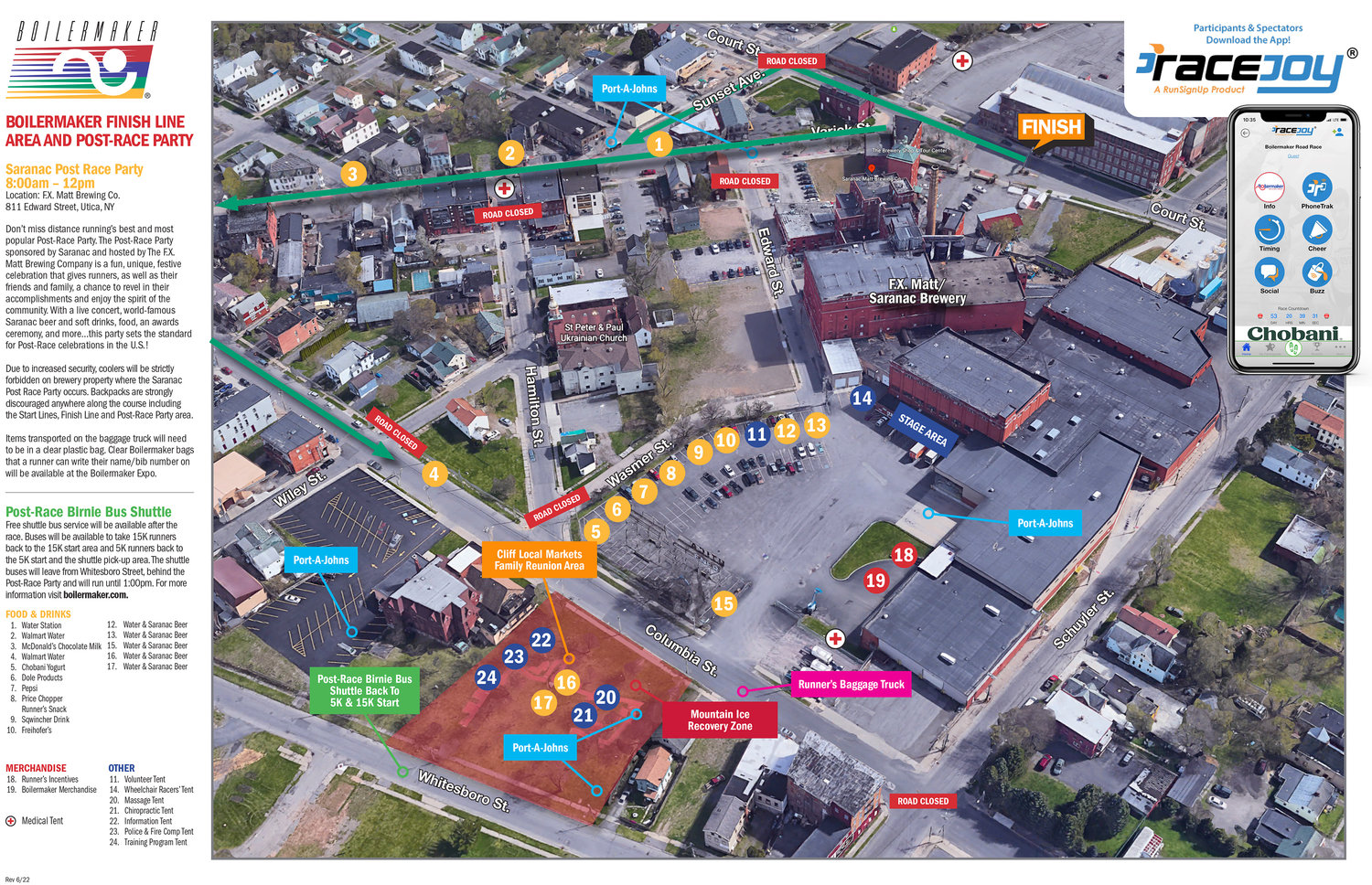 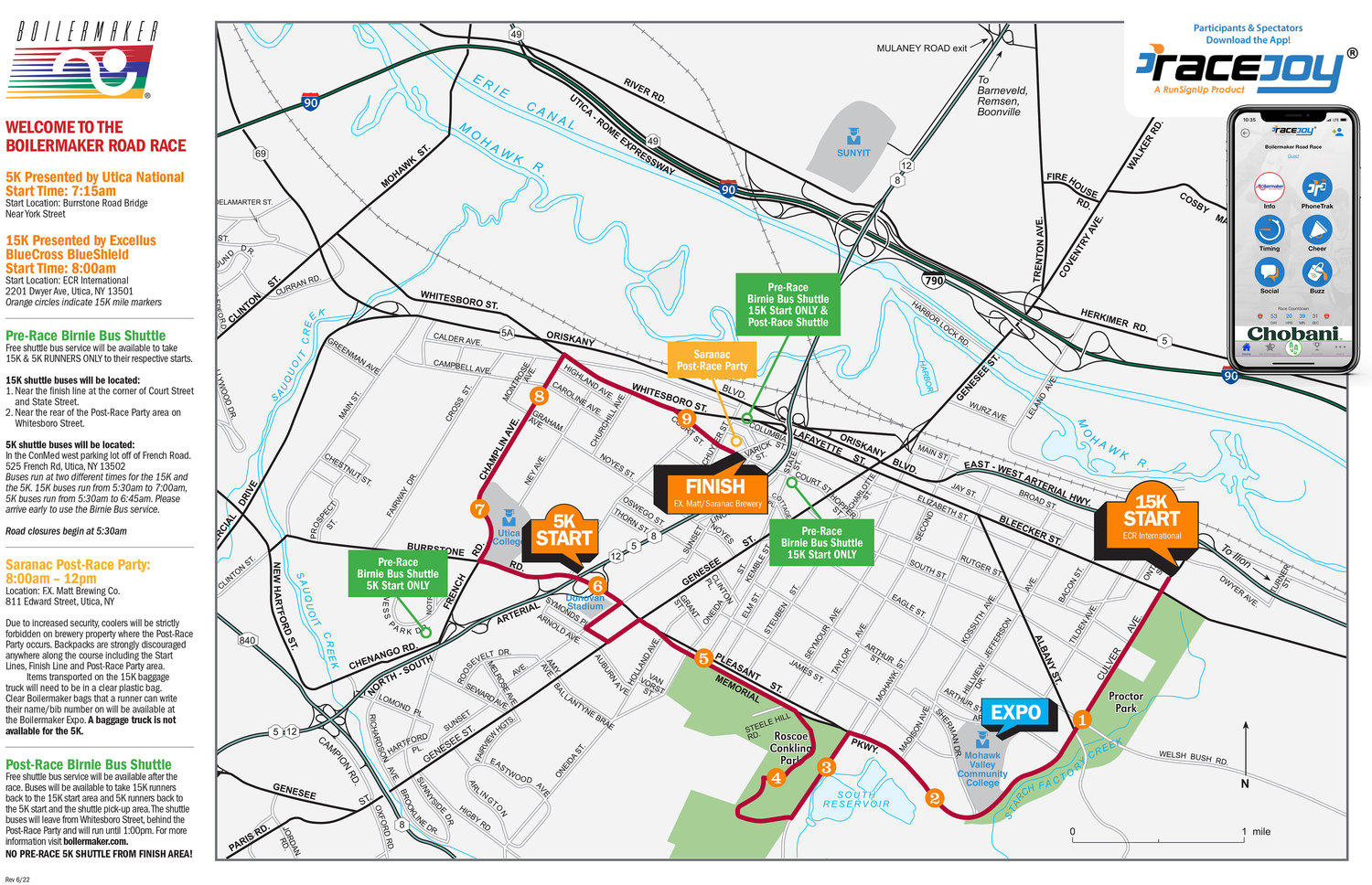 UTICA — The popular Boilermaker Road Race is ready to roll through the Utica streets this morning.

After the last two years featured altered races due to COVID-19 challenges, Utica’s premier summer sports event is returning to its traditional second Sunday in July. It is the 45th edition of the 15K race, which covers 9.3 miles.

The return also means thousands of people taking part in the 15K event along with the wheelchair division as well as the 5K event on Sunday morning. While registration caps weren’t met like recent years, more than 10,000 people — both from the Mohawk Valley and around the world — have registered across the events. Countless spectators also cheer on participants.

“We’re fortunate,” Boilermaker President Mark Donovan said. “We have the support of the community and support of the city and county. Our sponsors are incredible. They bailed us out the last two years. We now know that we’re a 10,000-plus-person event, which makes us the biggest thing between New York City and Cleveland. That’s not a bad spot to be.”

Here’s five things to know about the Boilermaker:

After none last year, the invited elite professional runners return to the 15K race.

The field is expected to include last year’s men’s winner in Syracuse native Stephen Rathbun and women’s winner Remsen native Savannah Boucher. They were the first Americans to be race winners in at least 30 years.

Another notable in the field is Camden’s Sam Morse, who took second place in last fall’s altered race.

There are a few international runners who are also vying for a top result as the Boilermaker will serve as the Professional Road Racing Organization (PRRO) Circuit Championship for the first time since 2016. A total of seven runners are eligible for the super bonus.

In usual years, winners of any PRRO race — the Boilermaker, the Cherry Blossom 10 Mile Run in Washington, D.C. and the Bloomsday 12K Run in Spokane, Washington — are eligible for the $10,000 PRRO super bonus. This year’s circuit championship is unique because anyone who has won an eligible race since the last championship race in 2019 is eligible.

In total, 7,618 people are registered for the 15K. The overall winner usually finishes in under 47 minutes.

The Boilermaker’s 15K start line is at ECR International and the race travels the Memorial Parkway through Valley View Country Club and Golf Course before returning to the Parkway and then Genesee Street then onto Shepherd Place, Sunset Avenue and Burrstone Road passing the Utica University campus. The course goes down Champlin Avenue, Whitesboro and Court streets before concluding on Court Street at the F.X. Matt Brewery.

The race, which officially became a timed event in 2007, begins on the Burrstone Road bridge and follows the rest of the Boilermaker course.

There are 2,780 people set for the 5K, which is up from about 1,540 during last year’s event. There were more than 5,000 people registered in 2019. The 5K has traditionally had participants of all ages and some use it as an entry point into the Boilermaker festivities.

There has been a different male winner since 2017 after New Hartford’s Kelan McKenna won it four consecutive years. The winner usually finishes in under 18 minutes.

There has been a different women’s winner in the event since 2015 with the winner finishing in about 18 minutes.

The division has grown throughout the race’s history when it started with five athletes in 1980.

This year, there are 37 athletes registered.

That makes for one of the larger groups in the the Boilermaker’s history of the division.

Among those expected in the field are Daniel Romanchuk, who has piled up wins around the country in recent years. The 23-year-old won the Boilermaker from 2016 to 2019. He wasn’t in the field last year when Utica’s Hermin Garic won for the first time.

“We’re very excited. The wheelchair field is one of the understated pieces of the Boilermaker,” Donovan said. “The stories and the individuals and how they ended up in this situation … are amazing.”

The division also includes the Wheelchair Challenge, which has participants complete the Boilermaker course in what is considered an “everyday” wheelchair. If a participant finishes in 2 hours and 15 minutes, they are awarded a custom-built racing wheelchair. There are two participants from New York this year: William Brosnahan from Accord and Emily Sweeney of Montrose.

The party has become one of the biggest social events of the Boilermaker with beer and entertainment as people mill about following the race.

After a smaller affair last year due to COVID-19 challenges, the party is open to everyone as had been custom in recent years.

Donovan noted that Boilermaker officials are always hopeful for good weather, which helps the overall experience.

He notes, though, that they know it is not something they can control.

Participants should be prepared for the elements, officials said.

The forecast from the National Weather Service calls for a sunny Sunday, with some clouds. The high for the day is supposed to be near 80 degrees.