Looking for a place to blow off steam by breaking a few things? 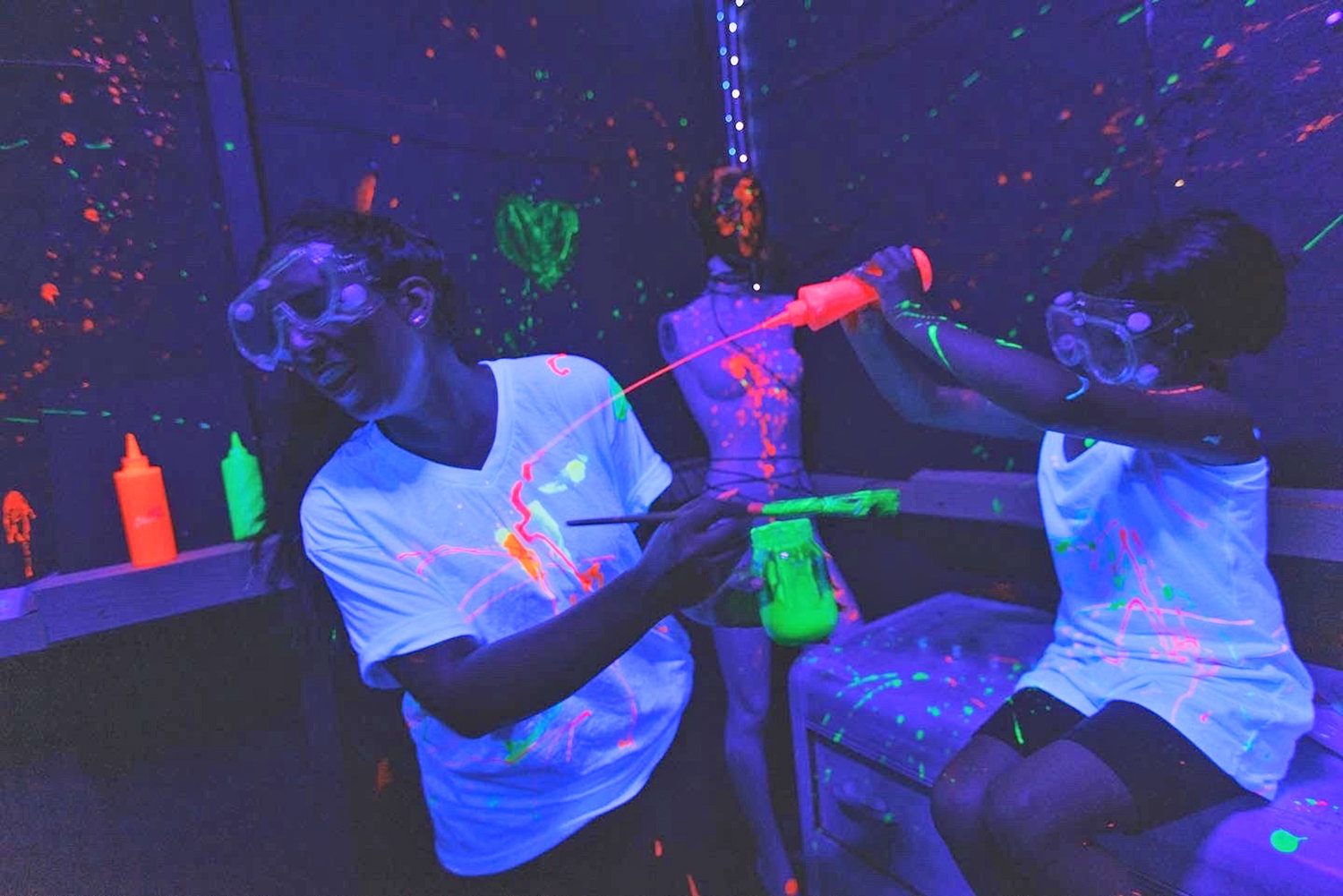 Visitors to the paint splatter rooms at Rage N Relax can take home a canvas painted with their own custom design.
(Photo courtesy of Sontino Cacciatore) 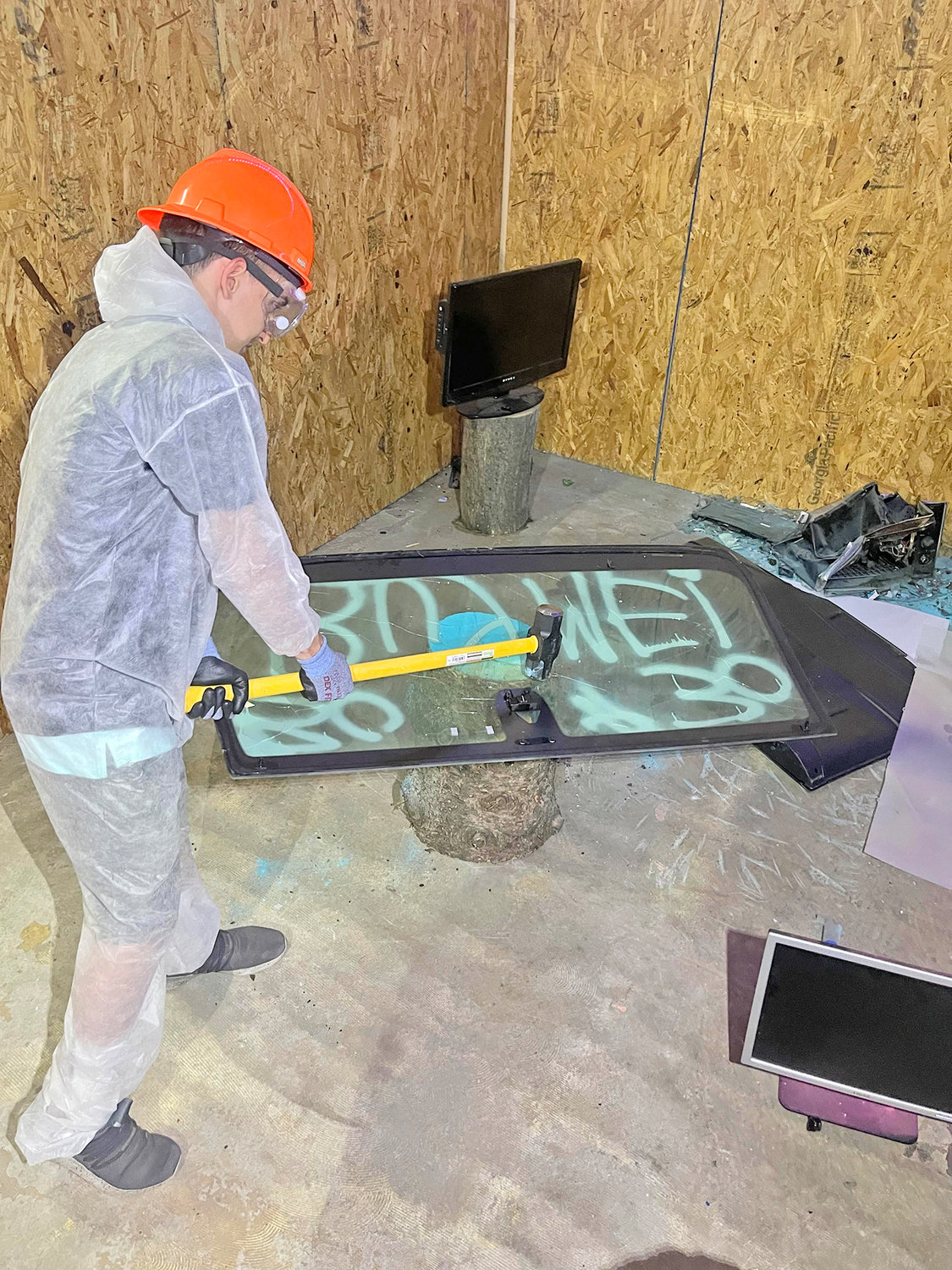 Visitors to Rage N Relax can let off some steam smashing objects — in a safe manner.
(Photo courtesy of Sontino Cacciatore) 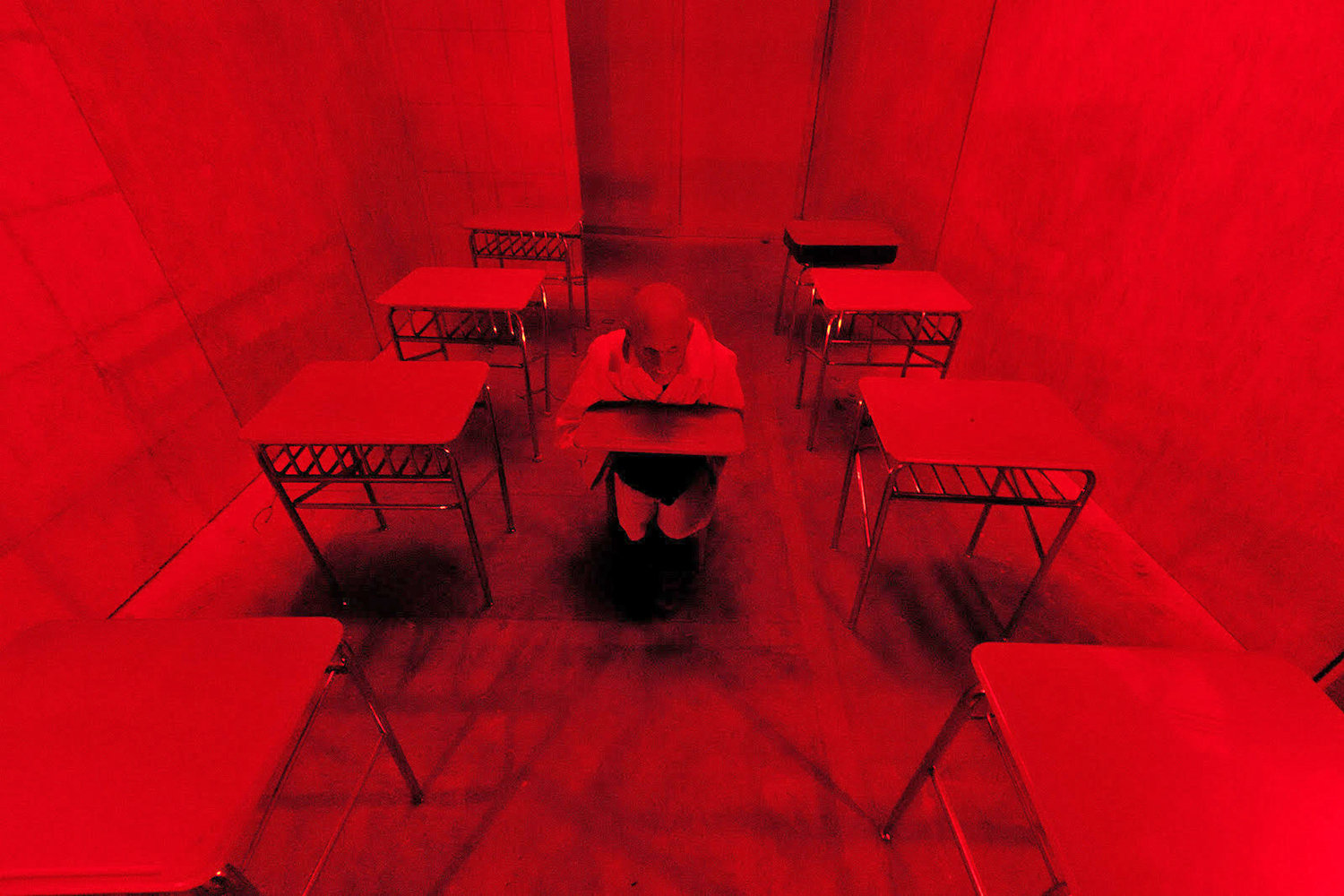 The Crooked Descent Haunted House will be open again this fall at the former Country Manor on Route 28 north of the village of Herkimer.
(Photo courtesy of Sontino Cacciatore) 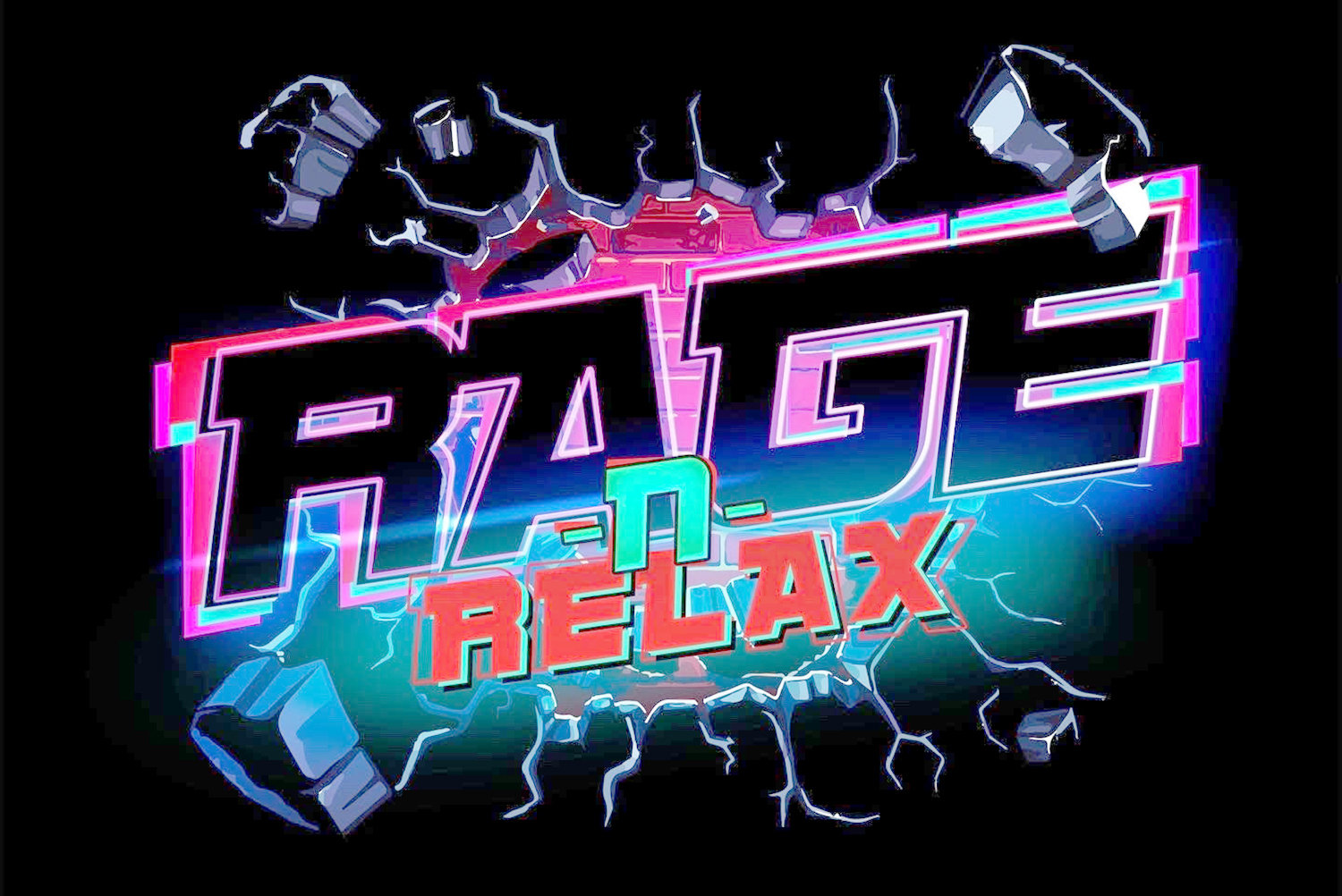 Rage N Relax is the new smash and paint splatter venue on Route 28 north of the village of Herkimer.
(Photo courtesy of Sontino Cacciatore) 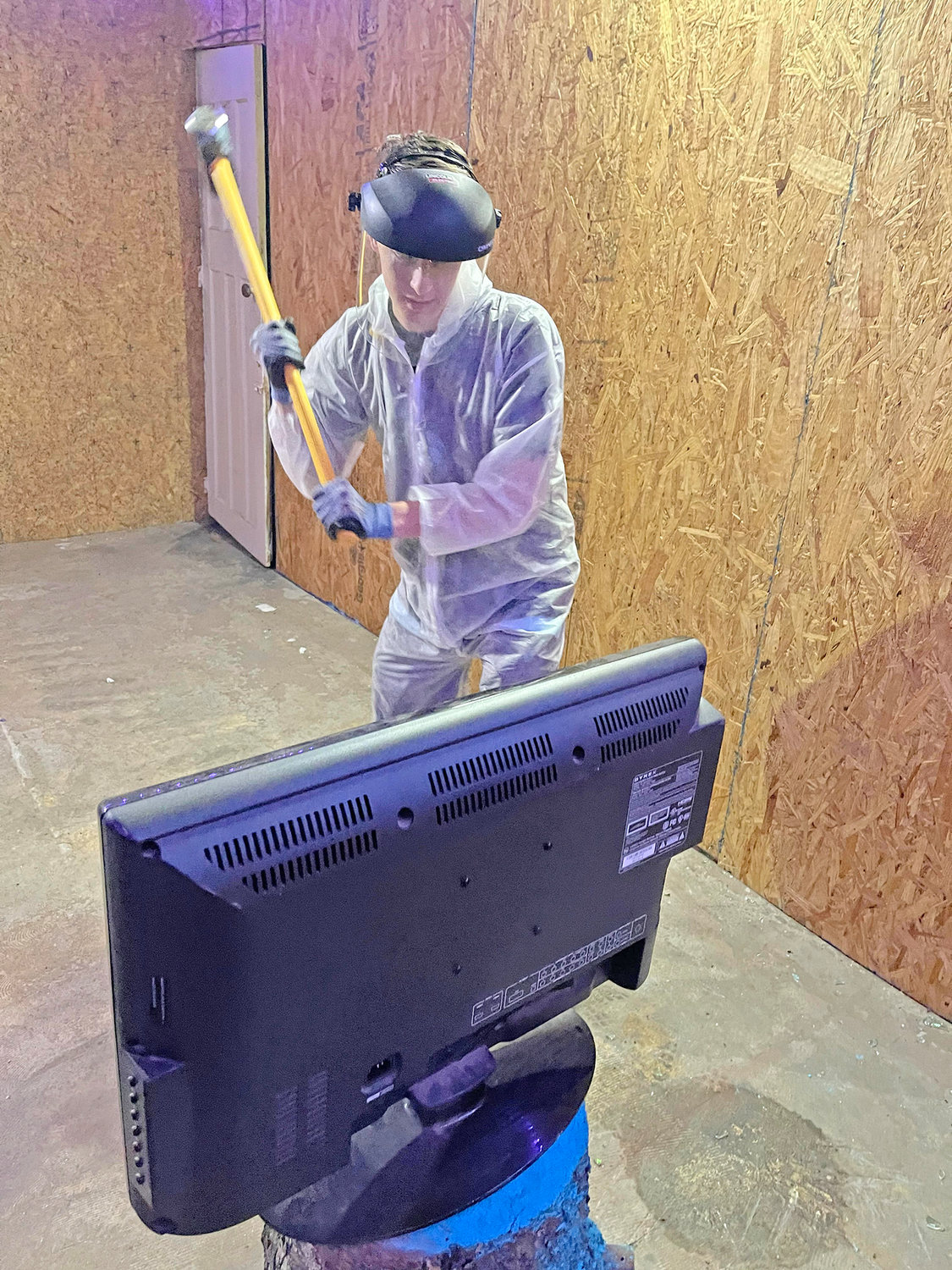 HERKIMER — Looking for a place to blow off steam by breaking a few things? Want to do some free-wheeling paint splattering?

How about getting hearts pounding and adrenalyn pumping this fall at a haunted house?

Sontino Cacciatore has area residents covered on all counts with his new venture, called Rage N Relax, https://ragenrelax.com, and his Crooked Descent Horror, https://www.crookedhorror.com/, now in its fifth year.

Both are located at 4338 Route 28, Herkimer, the former Country Manor, which he is currently leasing while looking for a permanent location.

Rage N Relax, which opened in July, offers a safe place to have fun and relieve stress, according to Cacciatore. “I wanted to give people something different to do,” he said. “Something unique.”

Smash and paint splatter rooms are popping up at sites around the U.S. and around the world and have become popular attractions, he said, but added that until his rooms opened the closest ones were in Syracuse.

Rage N Relax features three rage rooms, which offer space for people to smash items - non-hazardous, non-toxic ones such as glassware, ceramics, flat screen TVs and furniture, that is - while playing music on the facility’s Bluetooth speakers.

Smash sessions are offered starting at $20 per person “for 20 rage-filled minutes,” according to the business’s website. The staff will clean up the mess.

Cacciatore picks up a lot of the items for smashing along the side of the road. Customers can bring their own, but all items must be non-toxic and approved by the staff.

The tools for smashing, including bats, hammers and crowbars, are all provided at the site. Participants 18 and older must sign a waiver and youths ages 10 and older can participate with parental consent and a signed waiver.

The splatter rooms allow solo artists and groups of up to eight people to use glow-in-the-dark splatter paint to create a custom canvas design, a custom shirt or to just let loose in the paint-throwing studio. The neon paint glows in the black light and creates a vibrant design on canvas, according to the website. Again, the staff cleans up the mess.

Caps, ponchos and shoe coverings are available to protect clothing and special boxes for transport come with the purchase of a canvas. Children 5 and older are welcome with a responsible adult.

Online reservations are required and no food or drinks are allowed.

The rooms are also available for parties and special events, with the option of booking multiple rooms or even the entire facility.

Cacciatore put out the word about the new business through flyers and social media postings and the people who have come so far have been enthusiastic.

“People love it and they say they’re coming back,” he said.

Cacciatore attended Ilion schools, graduating from Central Valley Academy after the merger of the Ilion and Mohawk school districts. His parents own Primo Pizzeria/Cacciatore’s Restaurant and Banquet Hall on Barringer Road and he wanted to start a business of his own.

He decided to start with his passion - Halloween and haunted houses.

“I’ve always been intrigued by Halloween,” he said. “My birthday is in October, maybe that’s why. I’ve loved haunted houses since I was, like, 10.” At age 12, he set up a walk-through haunted house for Halloween in the family’s garage.

After setting up his haunted house on South Main Street in Herkimer for two years and in Frankfort for one year, he moved out to the former Country Manor last year and offered both a Halloween and a Scary Christmas haunted house.

A review on the website The Scare Factor.com gave last fall’s offerings - Forbidden Family and Witch Trials - a rating of 9.1 on a scale of 10. Forbidden Family focused on an inbred upstate New York family living in the woods; Momma Misty wanted revenge after her ability to have children was taken away. The Witch Trials offered a modern take on how the infamous witch trials of Salem might be carried out today, complete with gruesome details.

Preparing for the haunted house opening is a year-long process, said Cacciatore. He plans to open the last Saturday in September and continue Fridays through Sundays through the first weekend in November.

The Scary Christmas shows were also popular and he’s planning to offer those again as well.

Setting up his business has not been easy, Cacciatore admitted. “It’s taken five years to build this - lots of hard work, loans, insurance, permits.”

And he is currently looking for a new location, preferably one where he can locate both Crooked Descent Horror and Rage N Relax.

For right now, though, people who want to smash things, splatter paint or visit a haunted house can do so at the former Country Manor.