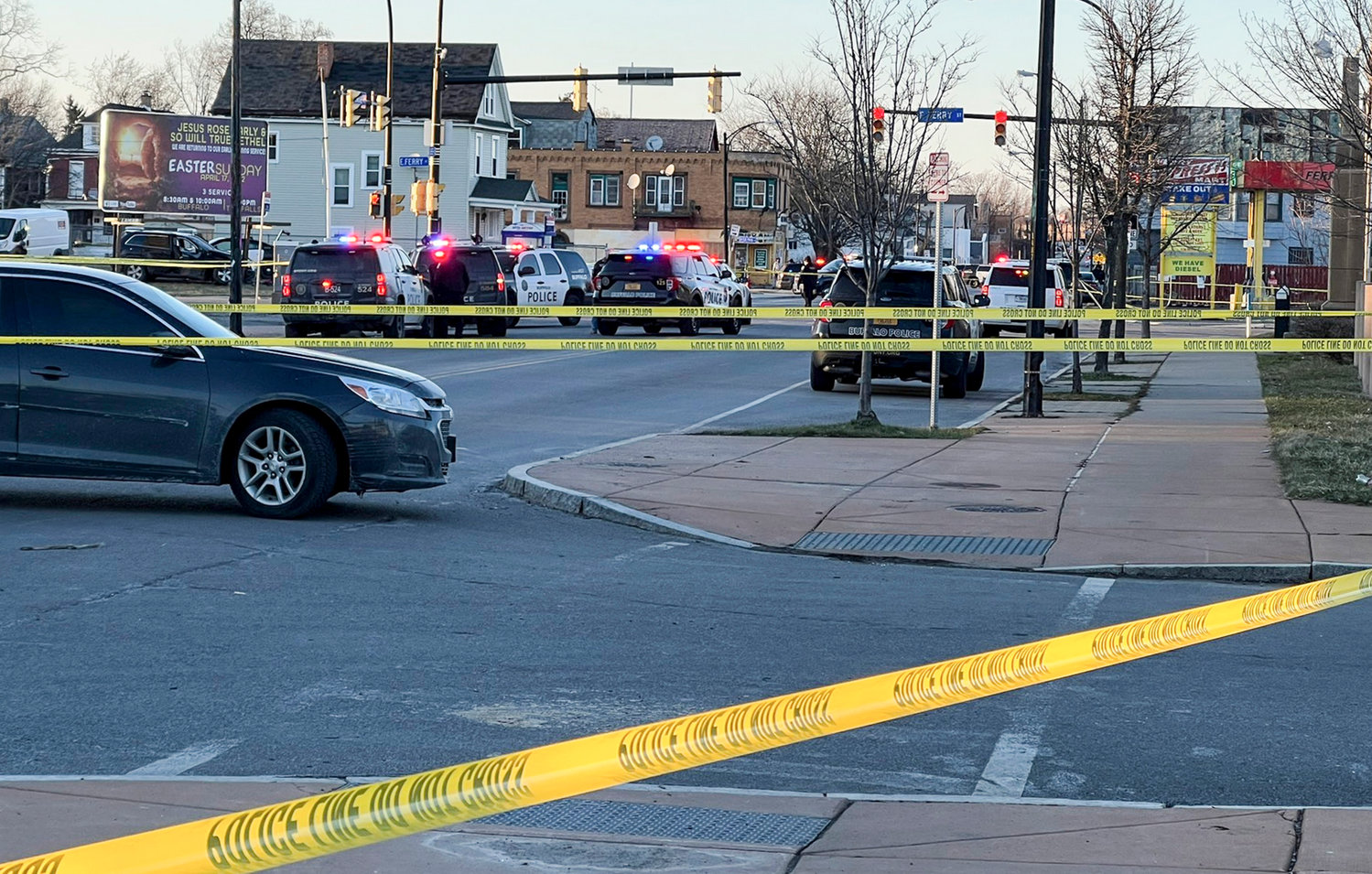 BUFFALO — Police radio transmissions captured the chaos on the streets of Buffalo during a wild car chase Tuesday evening in which three officers and the fleeing motorist were shot.

“I’m hit! I’m hit!” an officer can be overheard saying as sirens wail in the background.

One of the three officers struck by gunfire remained hospitalized Wednesday as investigators reconstructed the pursuit, which roared from one side of the city to the other with the gunman firing at officers from the moving vehicle.

The driver of the car also was in the hospital after being shot and wounded by police at an intersection in front of a police station, where the chase ended.

No bystanders were hit by the flying bullets, which authorities said was remarkable.

Police identified the gunman as Kente Bell, 28, who was hospitalized in critical condition Wednesday facing charges of attempted murder.

The chase began around 6 p.m. when Bell’s vehicle was approached in the parking lot of a waterfront park by police who considered it “suspicious,” Gramaglia said. The driver handed over his identification, but then drove off.

As police pursued, the vehicle slowed to let someone out. After the passenger exited, gunfire started coming from the car, police said.

On radio transmissions, captured by Broadcastify.com, the pursuing officers called in the position of the vehicle and shouted out warnings.

At one point, dispatchers can be heard on the radio repeatedly telling officers to “cut the pursuit!” But the chase either continued or resumed.

One officer, Trevor Sheehan, was shot in the arm. A bullet also winged his ear, which needed to be surgically repaired, Gramaglia said.

Officer Christopher Wilson was hit in his bulletproof vest, which saved him from serious injury. Officer Joseph McCarthy was shot in the abdomen. He remained hospitalized Wednesday but was expected to make a full recovery, Gramaglia said.

A video posted on social media by one bystander showed the end of the chase: Officers waiting for Bell’s approaching vehicle took defensive positions with weapons drawn. Multiple volleys of shots could then be heard on the recording.

Leslie Thomas, 64, who lives in an apartment overlooking the scene, was watching the news when she heard the gunfire.

“I heard about 10 shots. I said ‘What’s going on?’ It didn’t dawn on me that it was shots but it kept repeating and repeating so I ran to my window,” she said. She watched police officers pull a man from a vehicle and handcuff him. He appeared to fall to the street where other officers surrounded him.

Police couldn’t immediately explain Wednesday why officers had initially approached Bell as he sat in his car, or why he might have fled the encounter. But they said Bell was on probation for an illegal firearms charge in the town of Amherst in 2020 and was prohibited from carrying a weapon.

Bell survived being shot as a teenager in 2012, according to news reports at the time. It wasn’t clear if he had an attorney who could comment on the charges.

Police had initially announced that a second person was also in custody. On Wednesday, Gramaglia didn’t answer directly when asked if that person had been released, but said, “At this time, we have the only person we were looking for with culpability in this case.”