Dual threat quarterback Kyle Meier and a strong offensive line should help the Whitesboro football team compete as the young defense gets settled this fall. 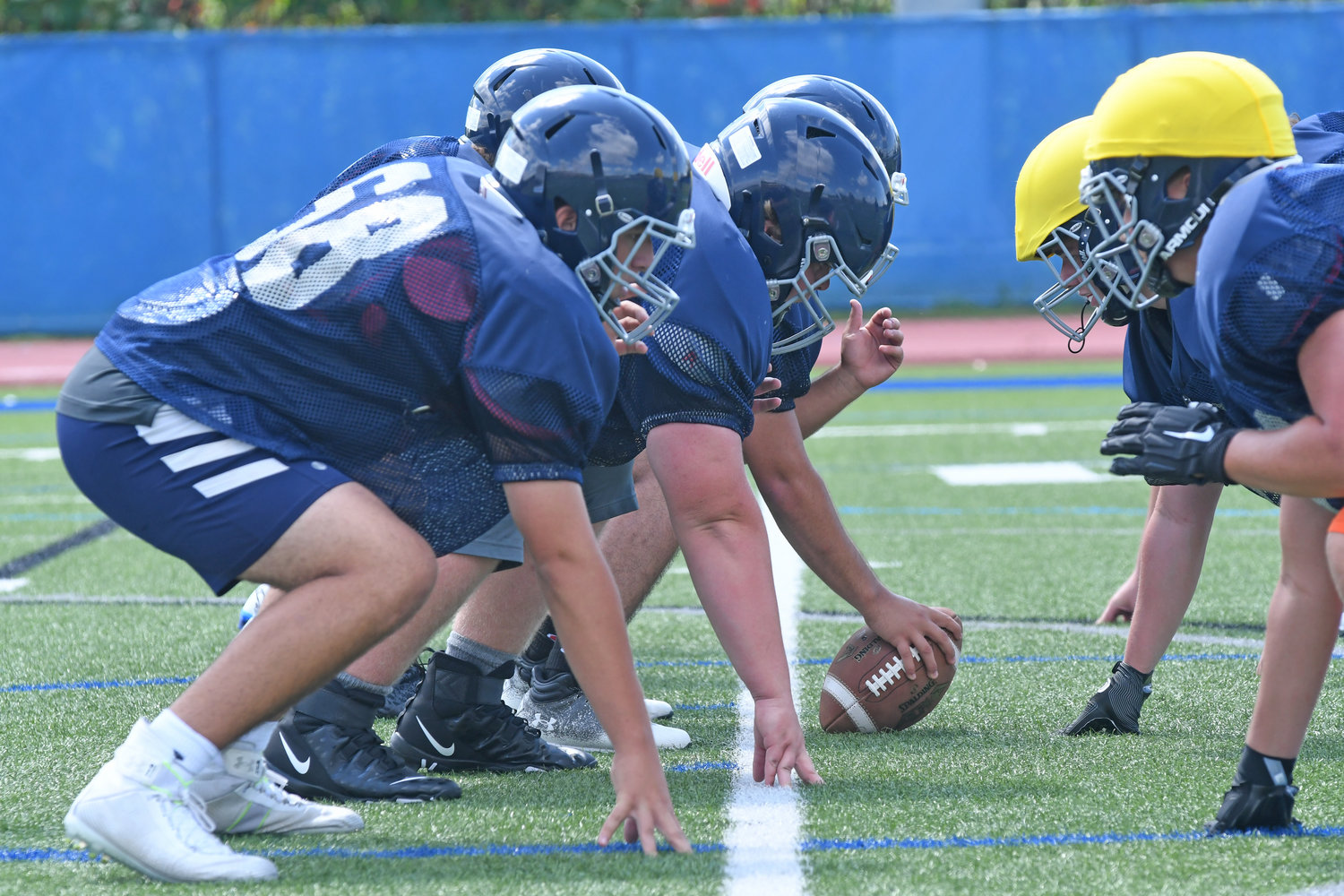 The Whitesboro offensive and defense lines get ready to run a play during practice at Edwin Wadas Athletic Complex. The Warriors need the experience of these groups to help alleviate the pressure on a number of young players elsewhere, especially on defense.
(Sentinel photo by John Clifford) 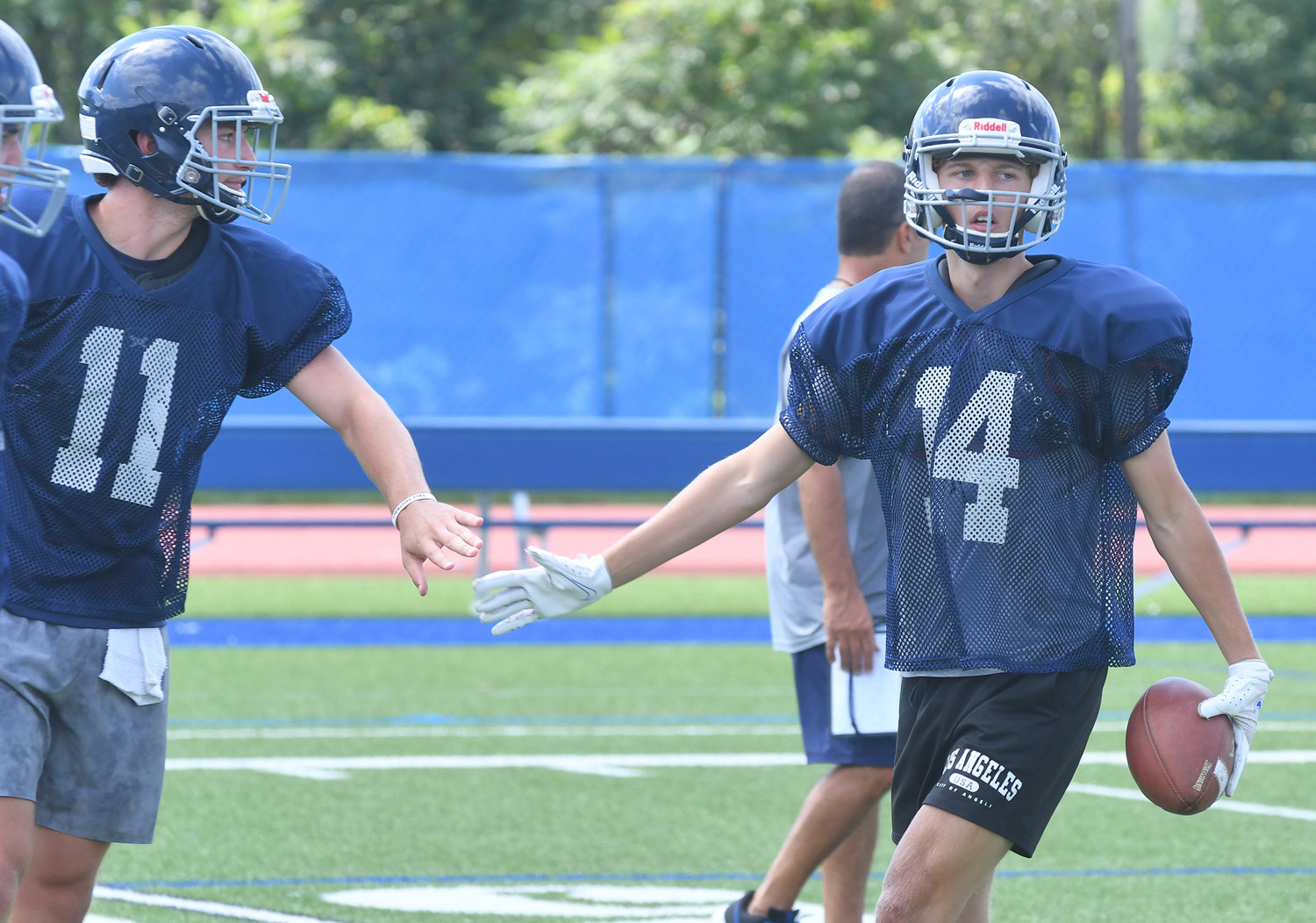 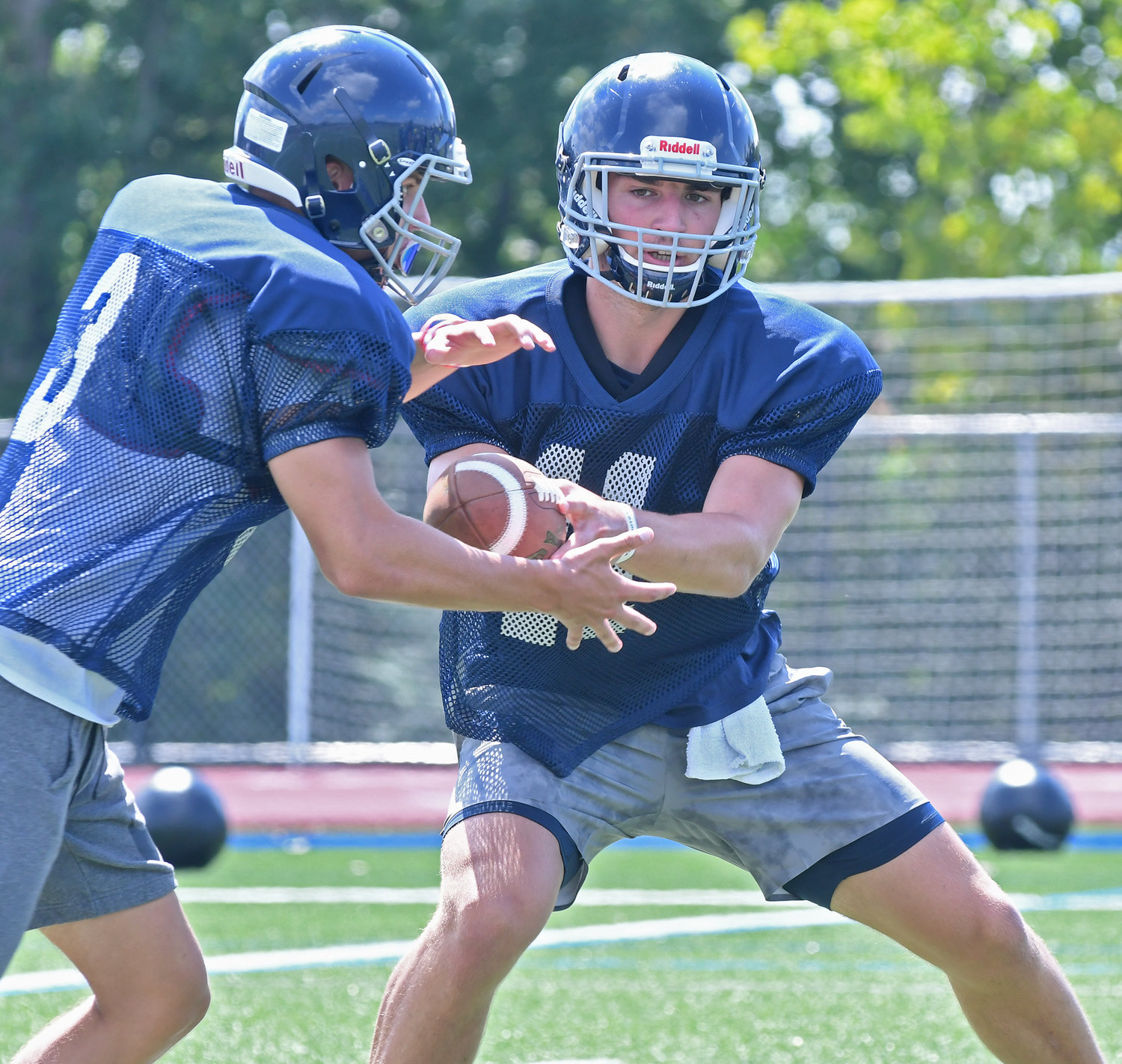 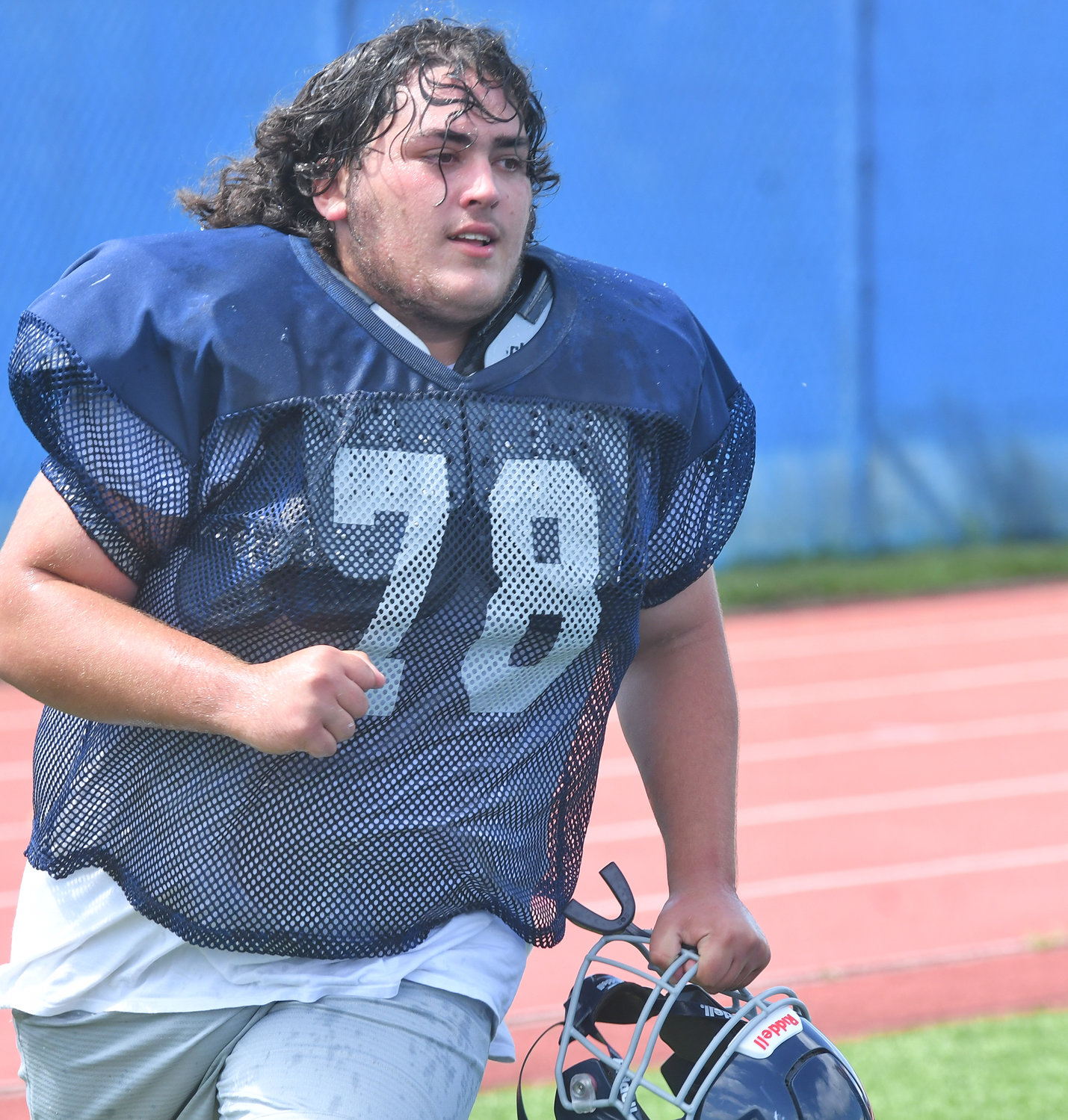 Whitesboro lineman Cameron Iona hustles out to the field after a water break during a practice at Edwin Wadas Athletic Complex.
(Sentinel photo by John Clifford) 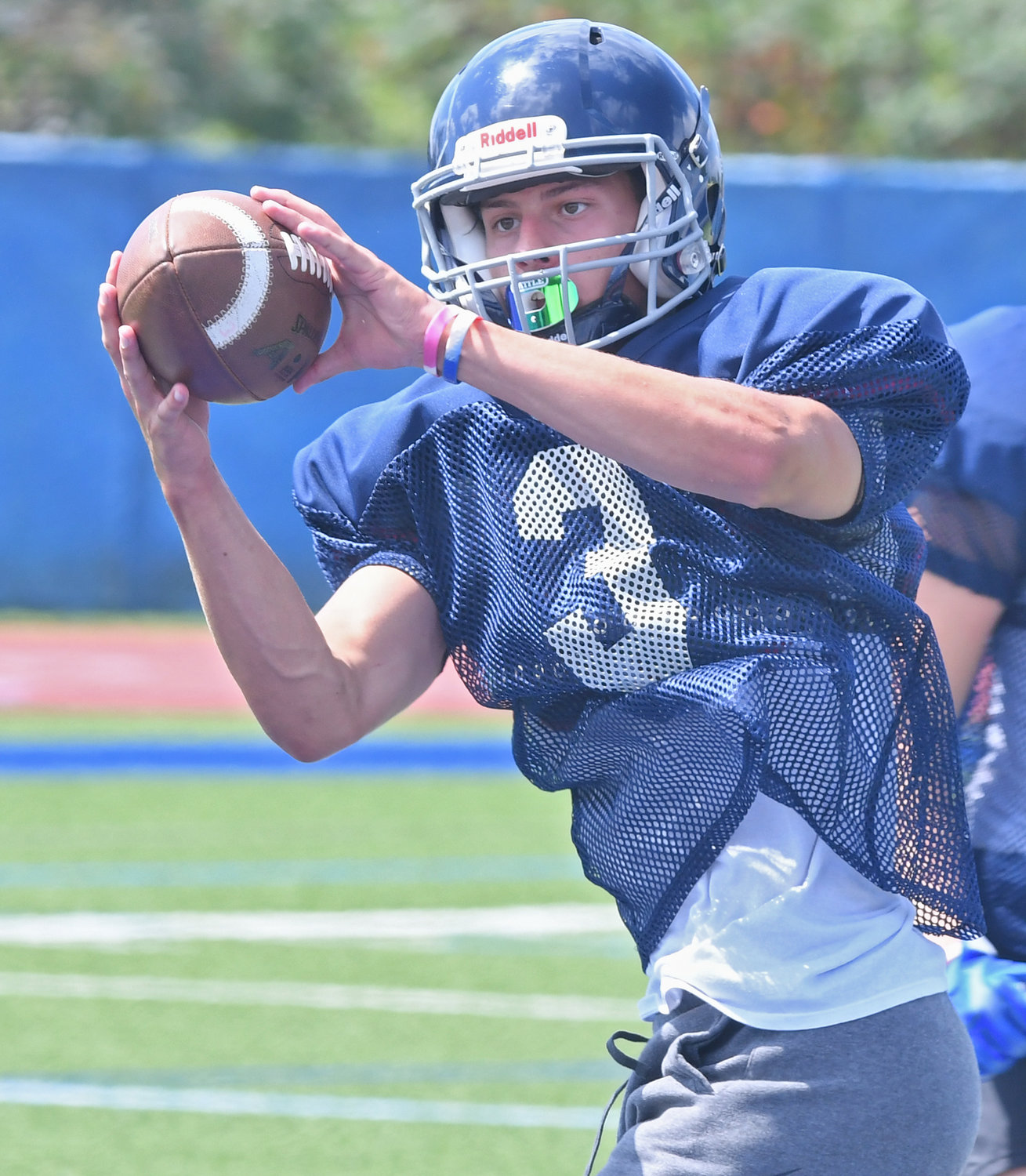 Whitesboro senior running back Nicholas Polnak watches the ball into his hands during practice at Edwin Wadas Athletic Complex. Polnak is one of three ball carriers who will get significant carries for the Warriors this fall.
(Sentinel photo by John Clifford) 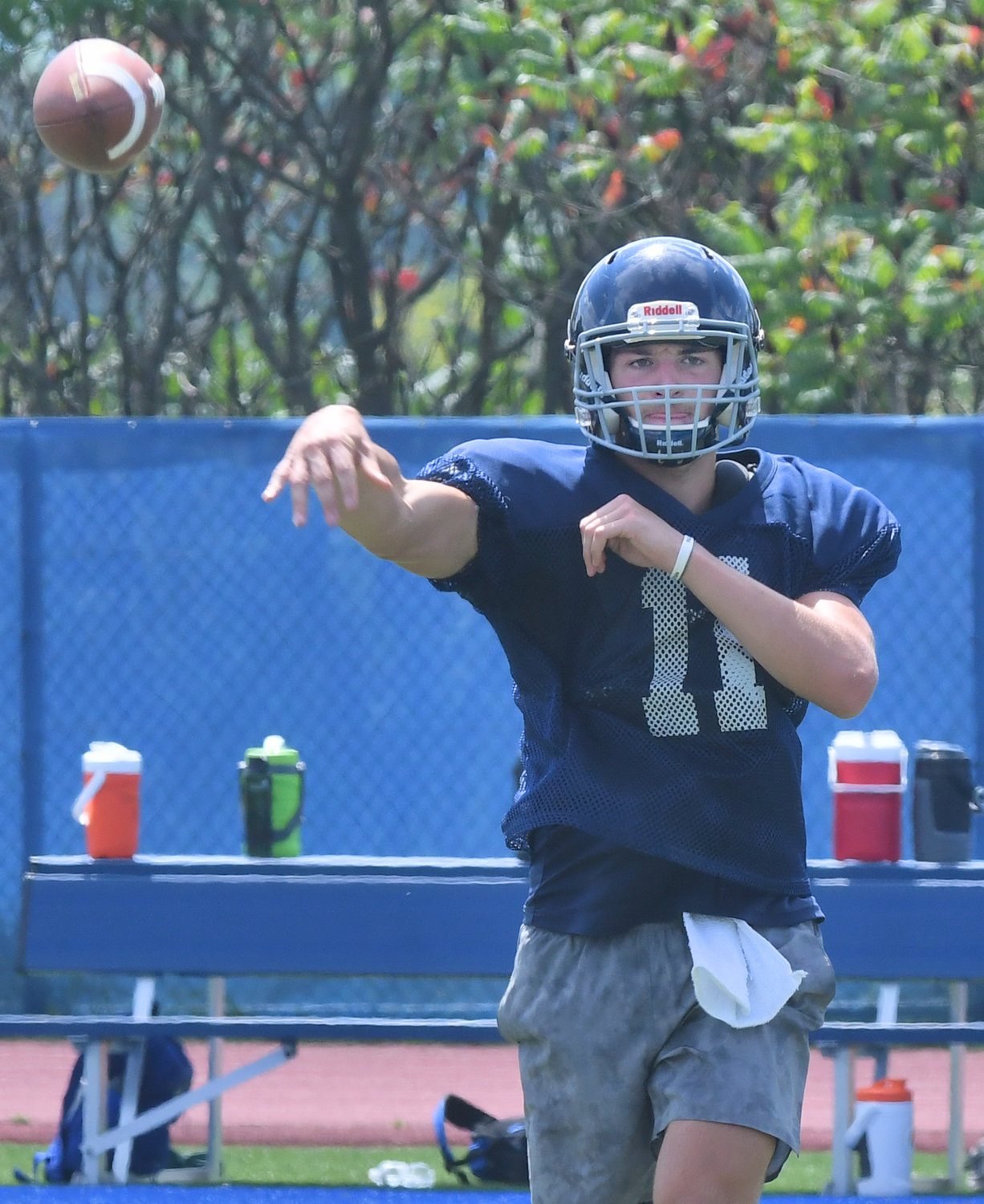 Whitesboro junior quarterback Kyle Meier fires a pass to a receiver during a preseason practice at Edwin Wadas Athletic Complex. Meier, who started at the end of last season, enters this season as the Warriors' starter and presents opposing defenses with a dual threat capable of throwing or running.
(Sentinel photo by John Clifford) 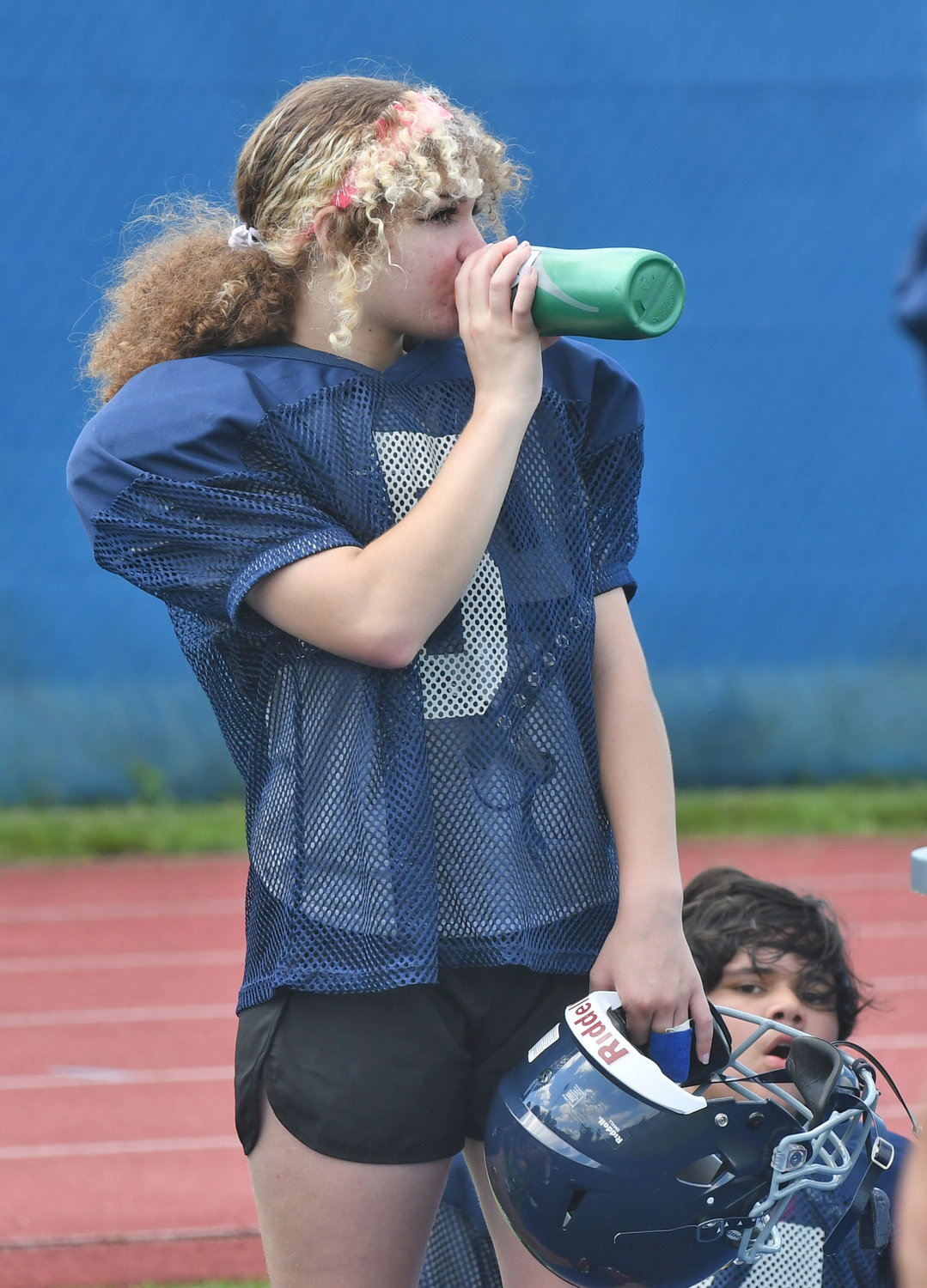 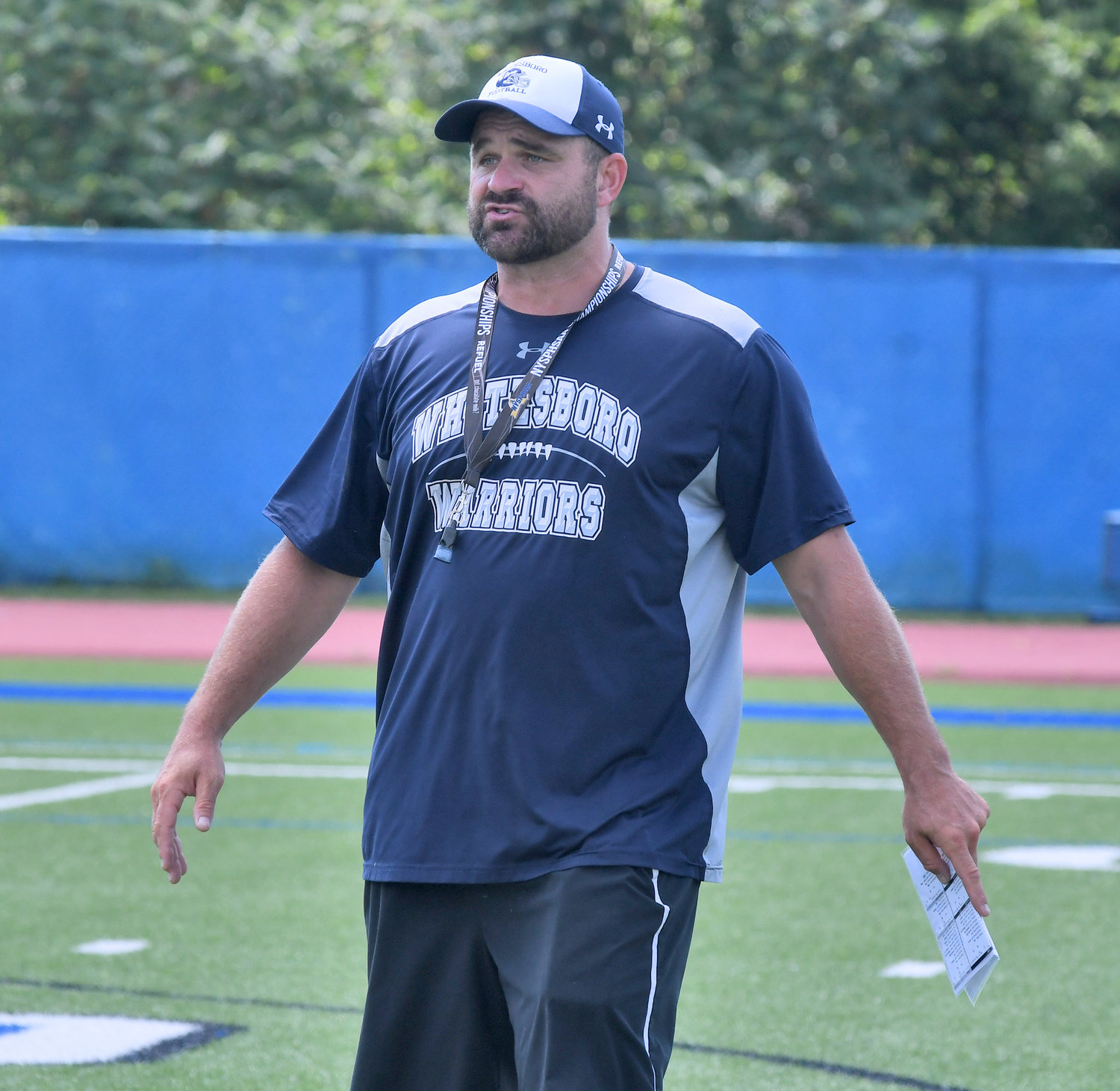 WHITESBORO — Dual threat quarterback Kyle Meier and a strong offensive line should help the Whitesboro football team compete as the young defense gets settled this fall.

The Warriors were 4-4 last season under head coach Curtis Schmidt, who enters his fourth season in the role. The team lost to Christian Brothers Academy in the Class A quarterfinals to end last season.

Schmidt, who was offensive coordinator from 2009 until he moved up to head coach, is looking to Meier, a junior who started at quarterback at the end of last season, to lead the offense this season. Meier, who Schmidt noted is getting recruited to play at the next level, has a strong arm but can run too. “His football IQ is extremely high,” said the coach, who noted Meier worked with a position coach and in camps in the off-season. “We expect him to be a coach on the field with the system we’re running this season. We have high expectations for him and he has high expectations for himself.”

Meier is replacing Colin Skermont, who played most of the team’s games at quarterback last year as a senior.

Sophomore Memphis Ferguson and senior Frank Trotta will also get snaps at quarterback.

Another player the Warriors must replace is DaShawn Hutchinson, who excelled at running back and linebacker but is now playing defensive back as a freshman for Utica University. “He was really athletic. He could do it all, run and catch, and he played great defense,” Schmidt said.

“We pride ourselves in being a tough, physical football team,” the coach said. “We’re going to open it up a bit and give our quarterback some options. But we run the ball,” with a plan to play tough in order to wear teams down and “jump on them.”

In the backfield is senior starter Nicholas Polnak as well as Ferguson and senior Edwin Velic. “We’re three deep at that position and they each bring something different to the table,” Schmidt said. “We’re really deep at a lot of positions. We won’t have too many two-way players so we can get a lot of kids rest.” Junior Keith Skermont is also a running back.

Anthony Dorozynski presents a big target as a six-foot-three tight end who has good hands and speed, the coach said. Other primary pass catchers are junior Brayden Czternastek, junior Patrick Wands and senior Spencer Cater. The passing attack will focus on high percentage throws, “dink and dunk with the ability to throw it deep. Much more balanced than in years past,” the coach said.

“Whenever we’ve gone far in the playoffs we’ve been strong up front,” and that, said Schmidt, is what this year’s group has been so far, including the blocking of the tight ends. Three-year starter Jonathan Kraeger — six-foot-two and 260 pounds — returns at left guard. In the middle is junior center Vincent Zajac and at right guard is senior Sean Bednarczyk. Junior Matt Brinck will be at left tackle but there’s competition at right tackle amongst junior Jordan Hughes, sophomore Thomas Price and sophomore Matthew Yardley.

“We’re going to be young on defense,” mostly at linebacker, Schmidt said. “When we have as young a team as this I like to say we’re a year away but I expect big things from this group.” He said the less experienced players “have stepped right in, and I don’t think we’ll lose a beat.”

In the trenches is “a big, physical group with decent speed. Experience there. I like the offensive and defensive line this year,” the head coach said. “They’re hard workers.”

Zajac returns to middle linebacker. Outside linebackers will likely be Ferguson and Wands. Other linebackers include Meier, Badolato, Centro, Crouse, Graziano, Johnson, both Marreros and Russo.

Czternastek and Wiggins will both play a mix of safety and outside linebacker depending on formations.

In the defensive backfield are Polnak, Velic, Dorozynski, Bono, Dawes and Pawloski. Also at defensive back are Trotta, Cater and Skermont.

“Our biggest key is to stay healthy and take it one game at a time,” Schmidt said. The team is not looking past West Genny, he said, but in a larger sense, “Our season goal is to be playing at the end of the season, playing for a championship.” To do that, the Warriors, he said, will have to be “efficient on offense. Defensively we have to run and hit.”

Class A, he said, “is a gauntlet right now.” Whitesboro opponent Corcoran is down from Class AA last season, he noted. “There’s no easy game on the schedule. Every game will have a playoff feel.” He added, “I love a tough schedule. It gets you ready for the playoffs. We’ll find out right away what we need to do.”