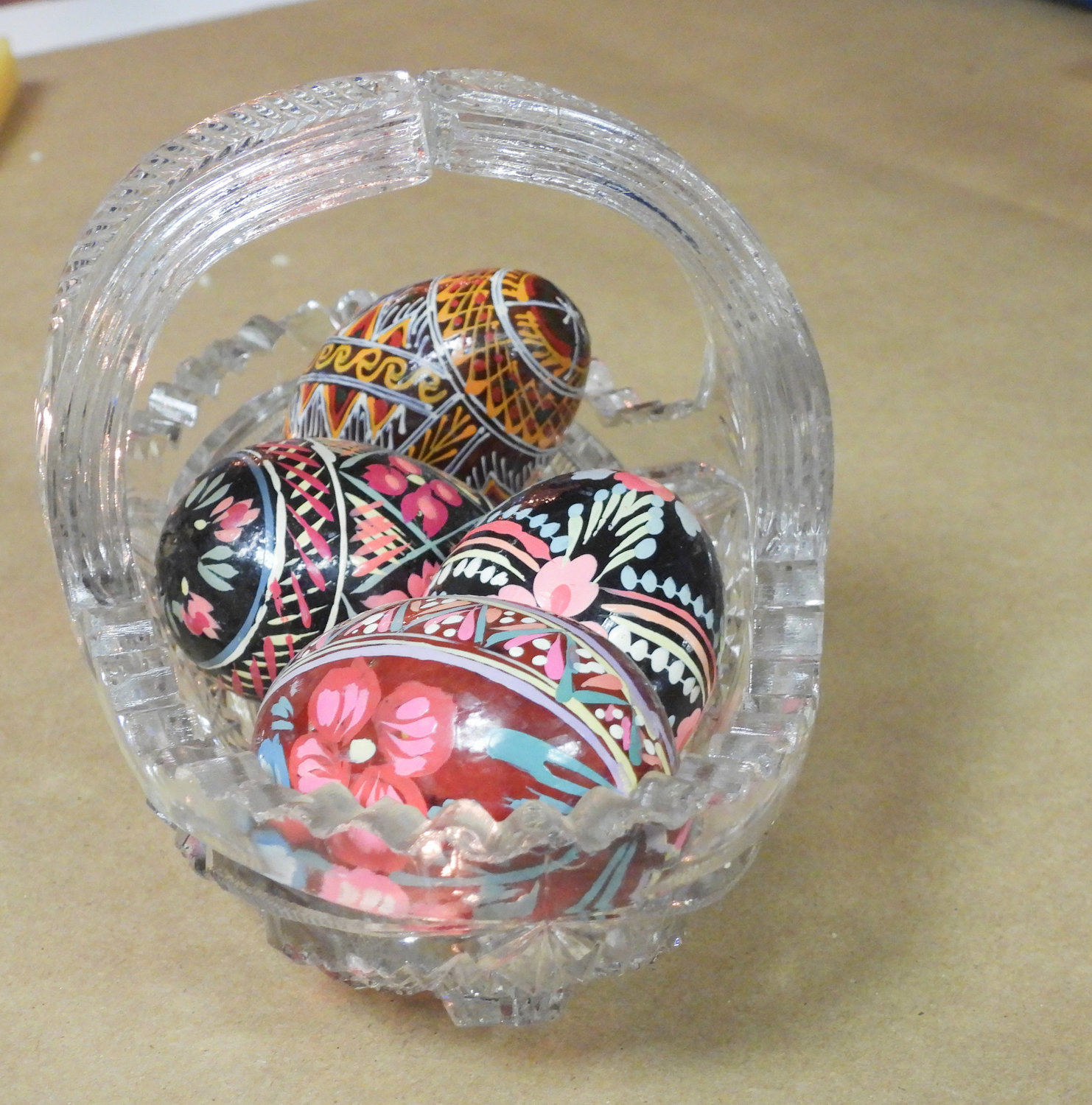 HISTORY OF TRADITION ­— Ukrainian eggs, belonging to Sarah Dustin, painted by her great-grandmother on display during the workshop at The Adirondack Ink
(Sentinel Photo by Charles Pritchard) 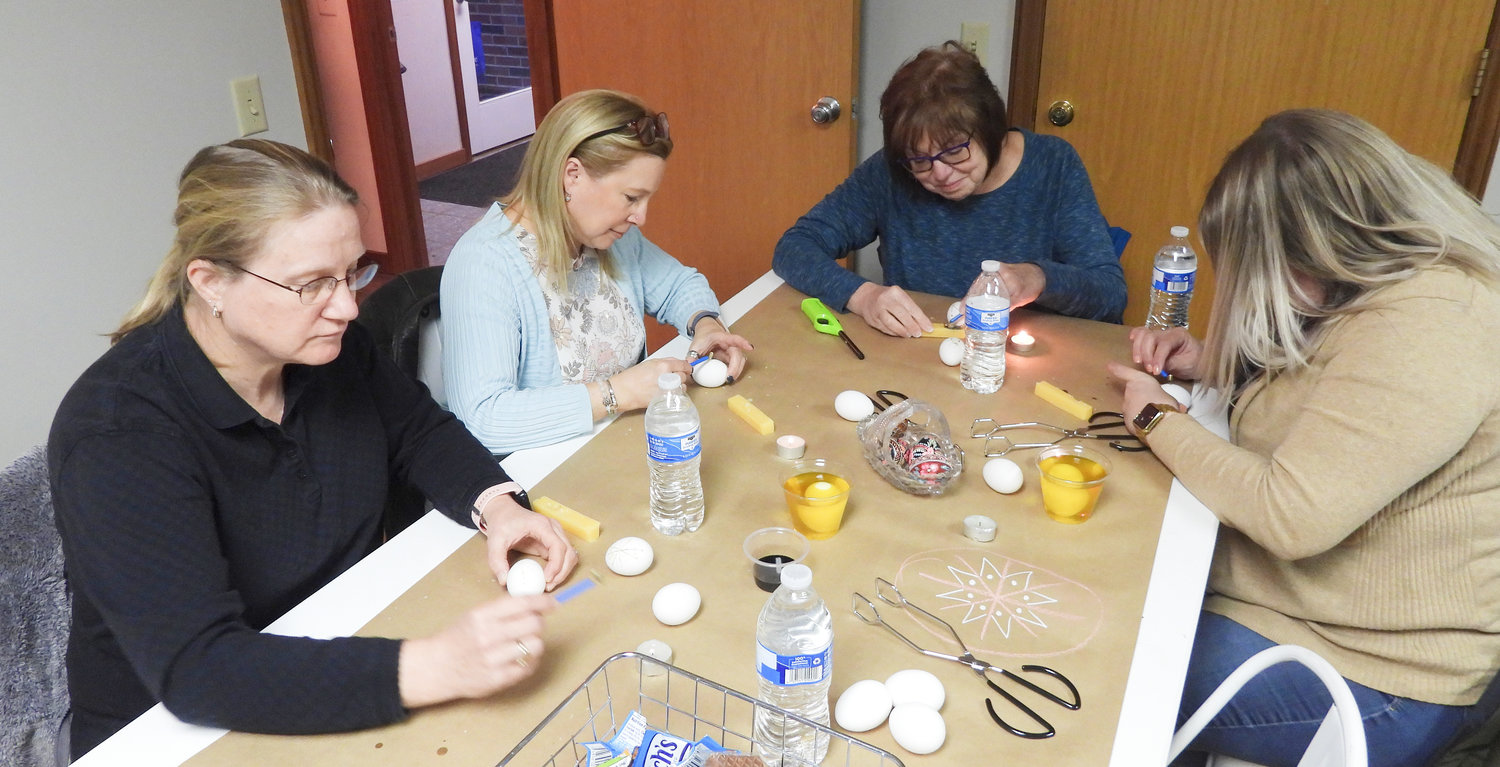 TRADITIONAL ART — Attendees work on their pysanka eggs at The Adirondack Ink’s Ukrainian Egg Painting workshop on Wednesday, March 23. By inscribing eggs with wax and then dyeing them, intricate patterns can be made across their surface.
(Sentinel Photo by Charles Pritchard) 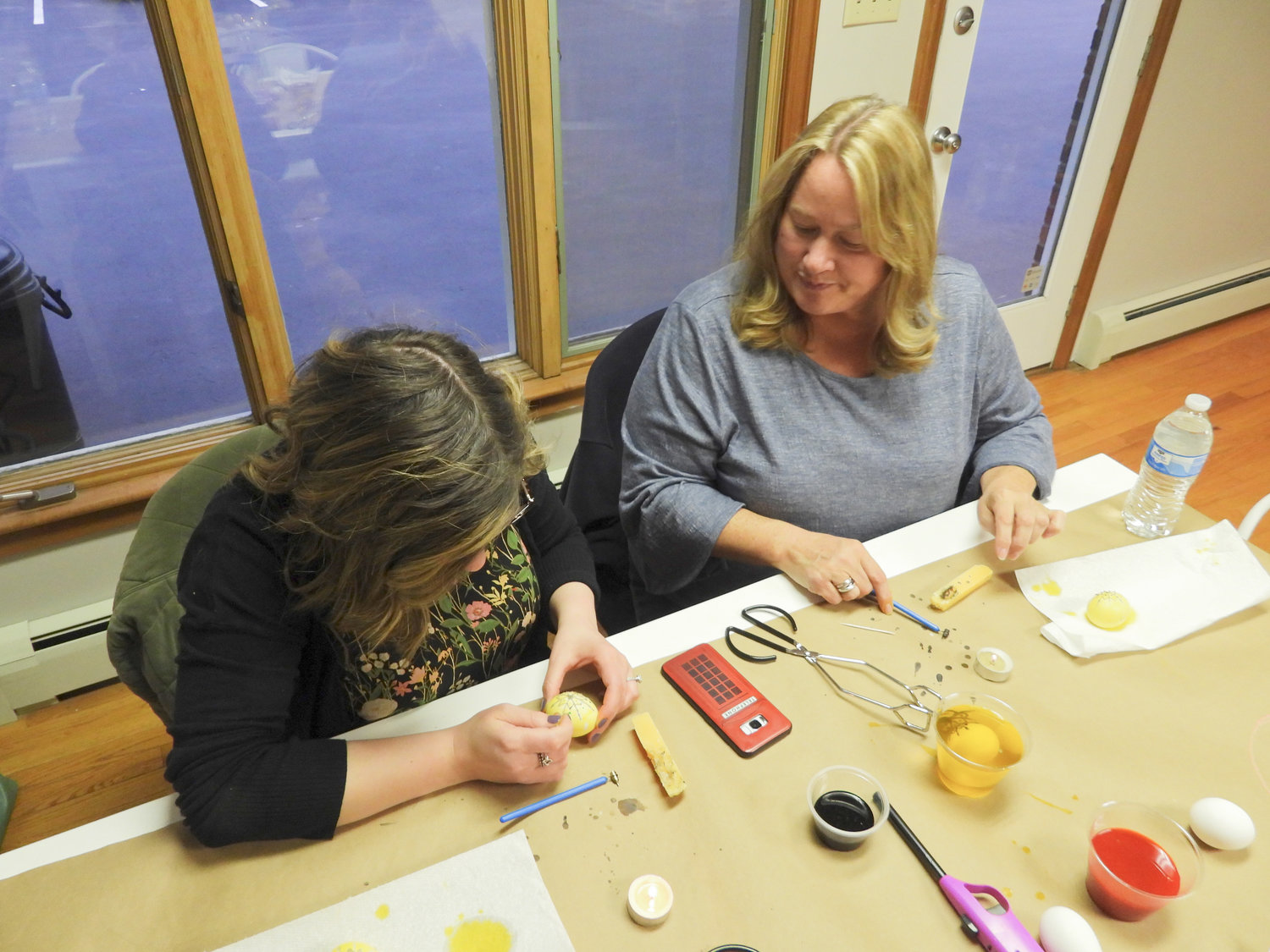 EGG PAINTING — Erica Silkowski, left, and Julie Moolenschot of Oneida work on their eggs at The Adirondack Ink's Ukrainian Egg Painting workshop. Moolenschot plans to take the skills learned at the workshop and teach them to her grandchildren.
(Sentinel Photo by Charles Pritchard) 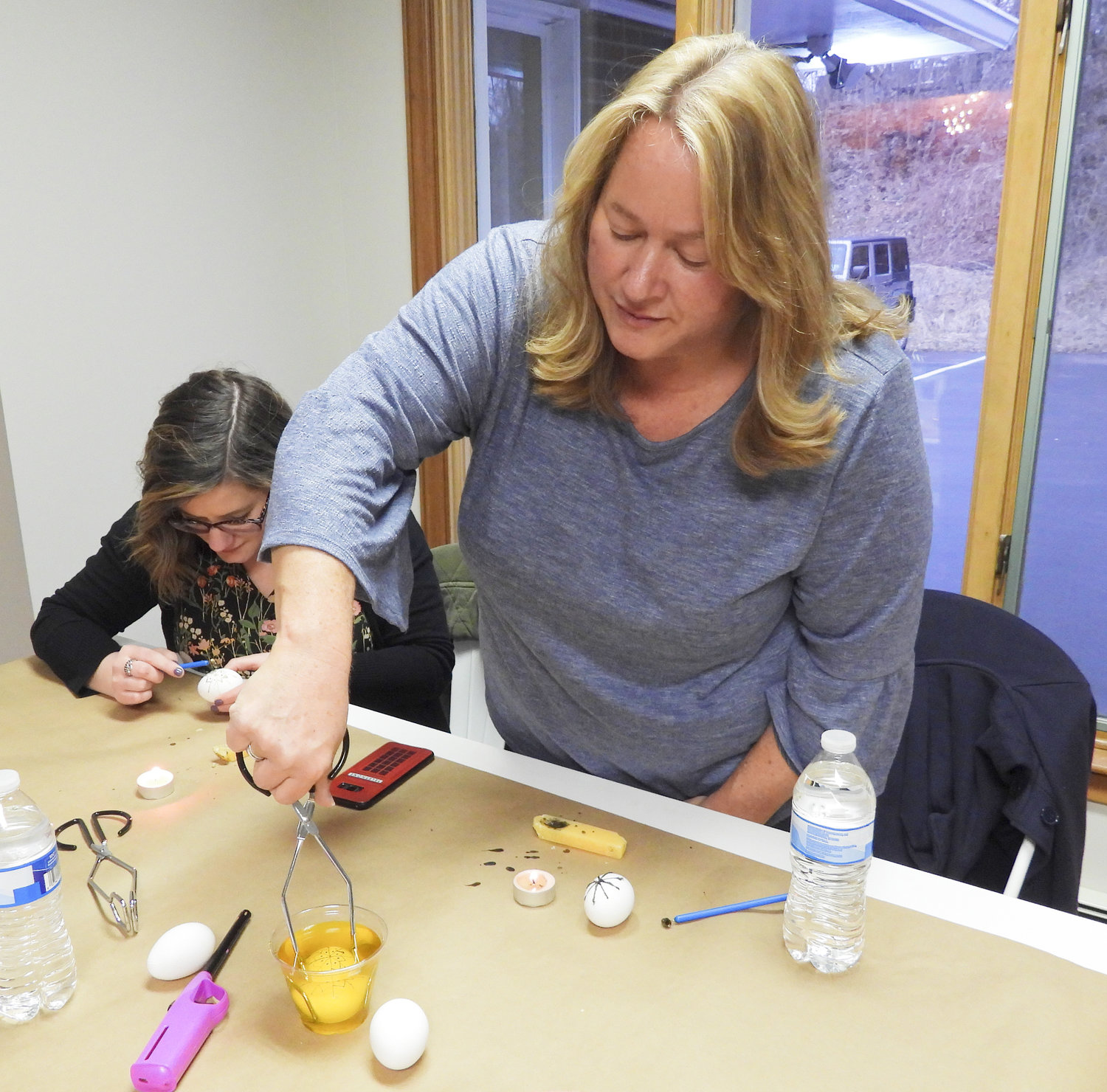 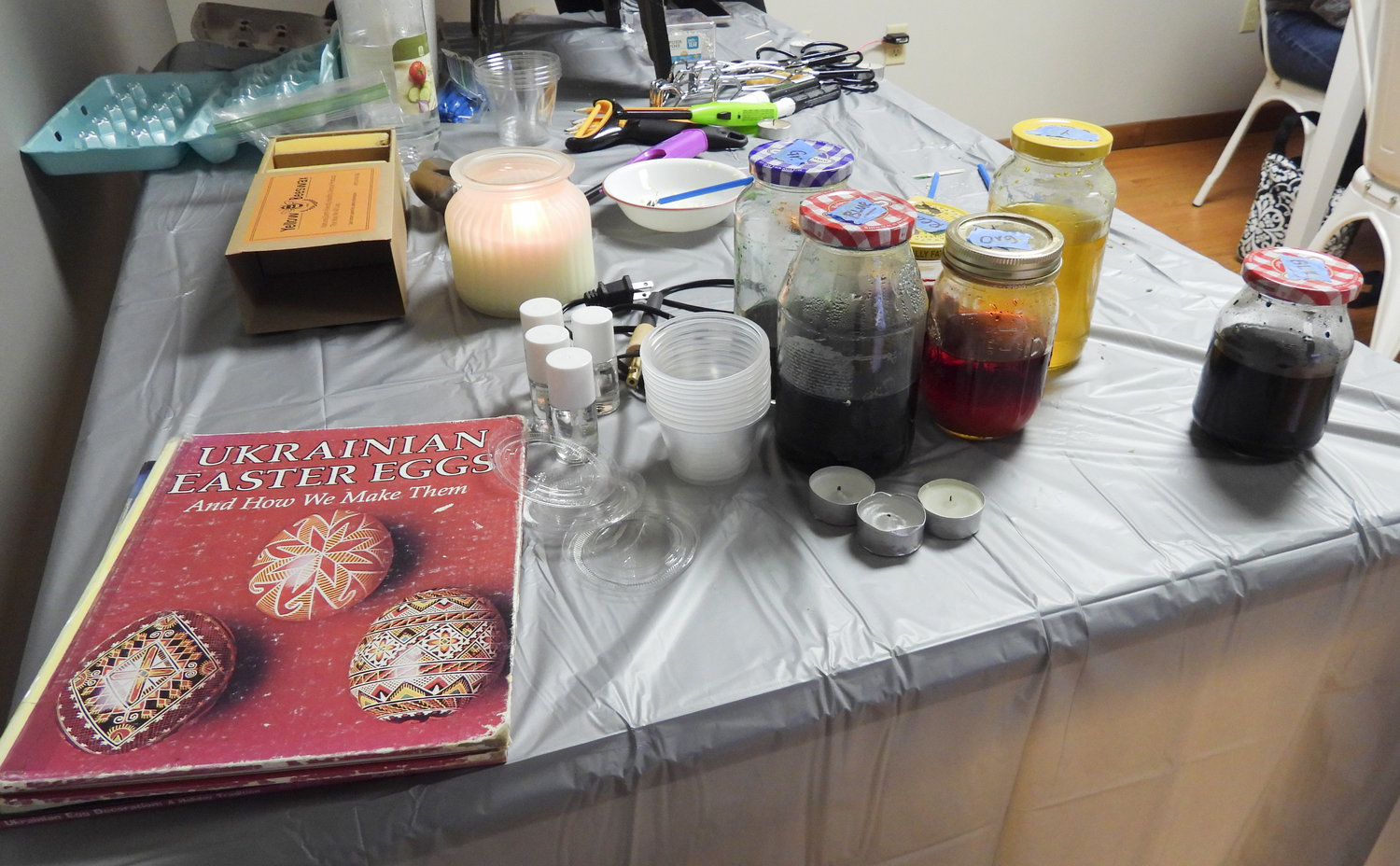 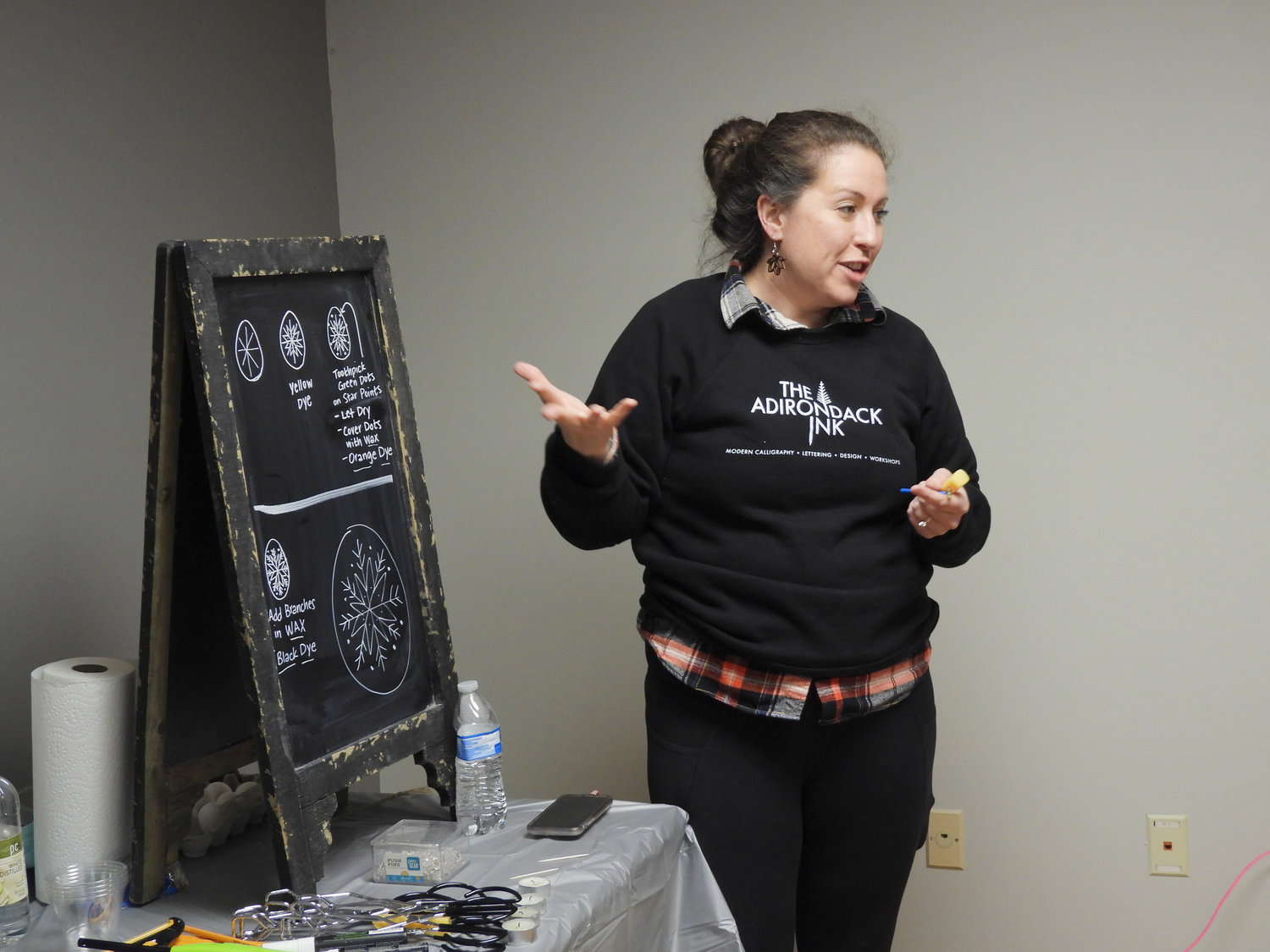 SHERRILL — It was planned months prior, but The Adirondack Ink’s Ukrainian Egg Painting Workshop became a place for people not just to learn a cultural art but help those in need.

Sarah Dustin, the proprietress of The Adirondack Ink, said she planned to hold her Ukrainian Egg Painting Workshop well before the Russian invasion of Ukraine.

“Last fall, I had agreed to teach two workshops, on April 5 and 7, at Mohawk Valley Community College,” she said. “At the time, my only plan was to share the art of pysanka and hopefully, help attract more artists to learn and appreciate this Ukrainian tradition. When the conflict between Russia and Ukraine intensified, and later the invasion, I noticed both workshops scheduled at MVCC sold out within days. It could have been a coincidence, but I also realized that this might be an opportunity to help be of service. I intentionally purchased all of my teaching supplies from a Ukrainian family, scheduled two more workshops at my business, and have donated a significant portion of proceeds to the Ukrainian Crisis Fund.”

Dustin said she’s only been painting pysanka eggs for about a year but has admired the art form since she was little. “My Great Grandmother was born and raised in what is now known as Ukraine and immigrated to America as a young woman,” she said. “She had gifted my mother with pysanka eggs, and I remember being mesmerized with how detailed and beautiful each egg looked.”

At the workshop, the local artist explained to attendees that eggs were drawn on using a special tool and beeswax before dyeing them and repeating the process, creating intricate designs.

Among those attending the workshop was Julie Moolenschot, an Oneida resident with relatives in Ukraine. “They live in a small village outside of Kyiv,” she said. “It’s been scary, but they’ve all been accounted for.”

Moolenschot said she has a Dutch name now, but her father’s side of the family came over from Ukraine. She attended the workshop with her friend, Erica Silkowski, of Oneida. Both agreed it was great to see the community come together to learn a new art form and help people in need.

Like many of Dustin’s participants, Moolenschot said she plans to continue painting pysanka eggs and hopes to teach it to her grandchildren.

When asked if she’s seen pysanka eggs getting more popular, Dustin said there’s definitely been more interest and appreciation of the art. “It’s just amazing how something we consider to be as ‘fragile’ as an egg is actually stronger than we think,” she said. “I think the same could be said of the strength the Ukrainian people have displayed over these past few weeks.”

All proceeds from the workshops are going to CARE for the Ukrainian Crisis Fund. For more information, visit care.org.

To learn more about The Adirondack Ink, visit TheAdirondackInk.com.