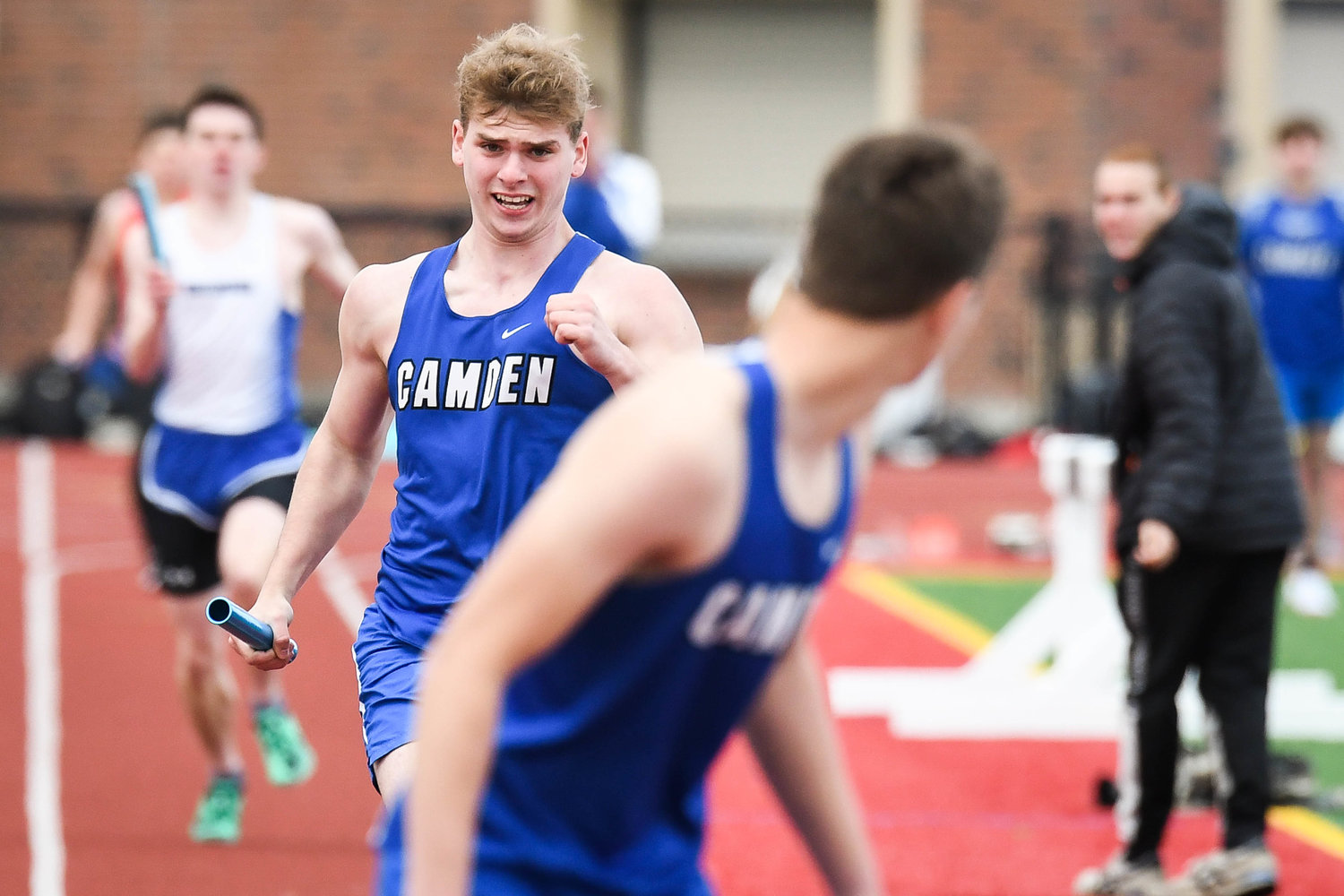 SPRINT WINNERS — Camden runner Robert Kieffer races toward teammate Dillan Melchiore to hand off the baton in a sprint medley relay during a track and field meet on Tuesday at PHS Stadium in Utica. The Blue Devils’ relay team finished first in the race. Camden finished second in the Tri-Valley League relay event.
(Sentinel photo by Alex Cooper) 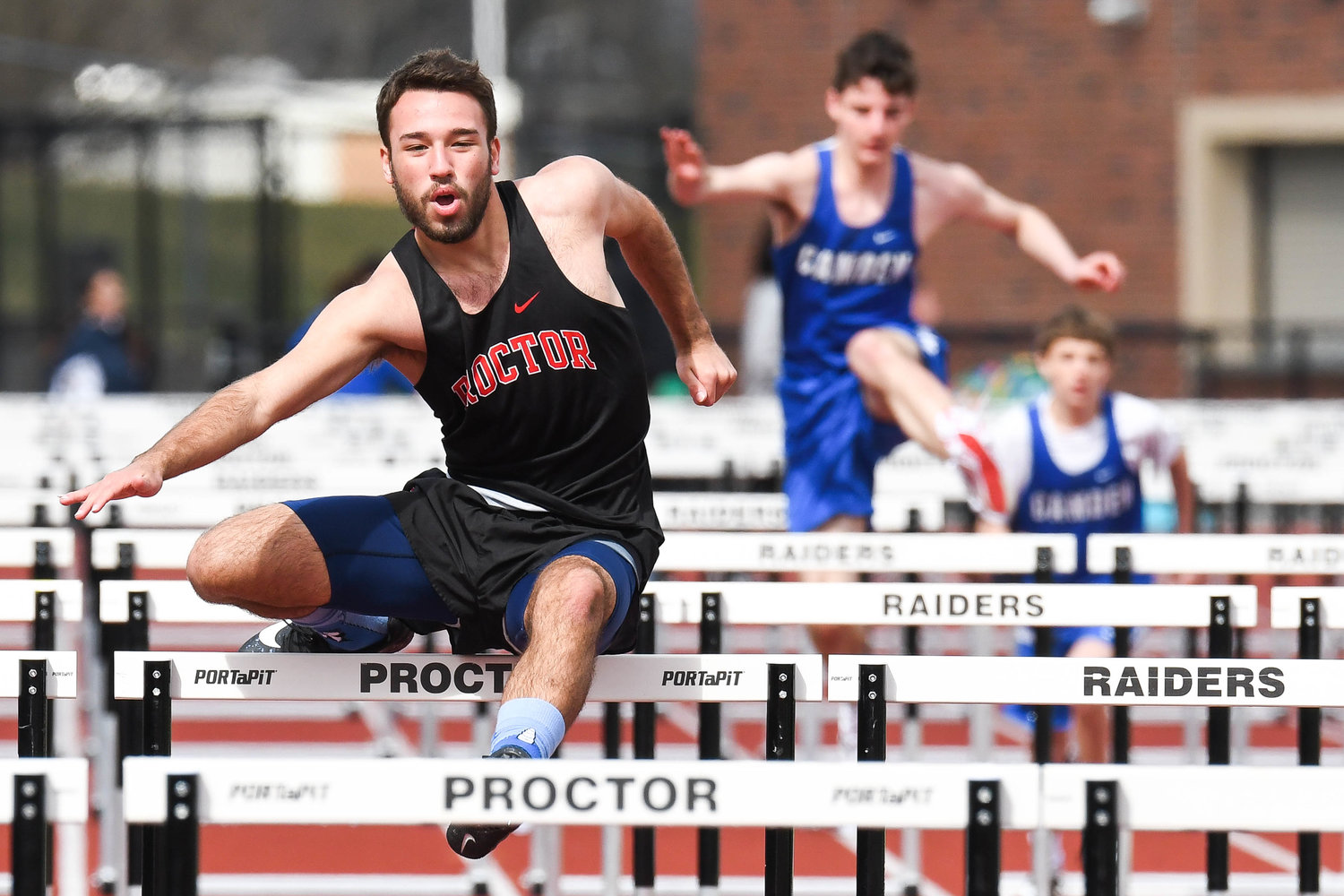 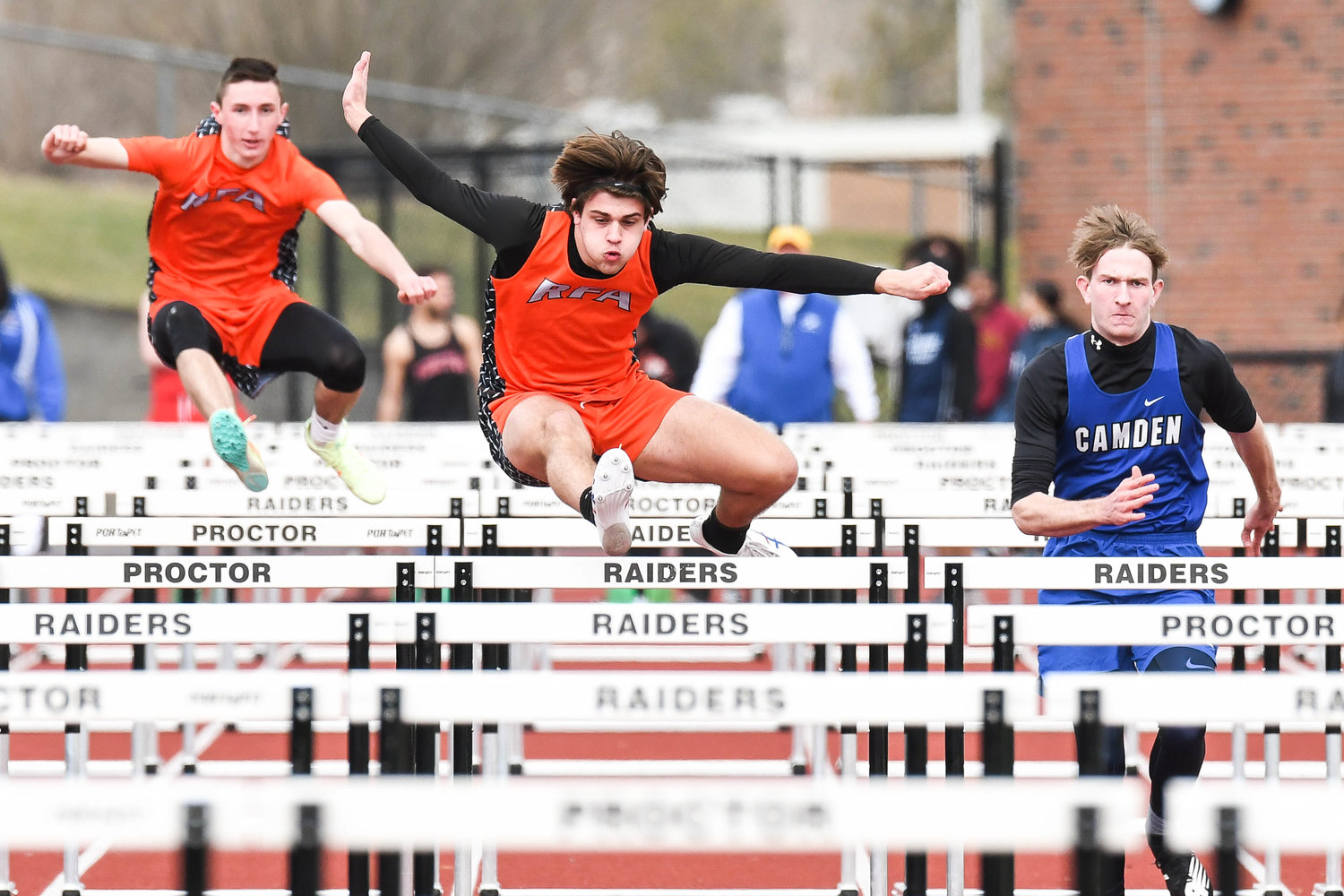 Rome Free Academy's Collin Gannon, center, competes in the 110-meter hurdle event during a track and field relay meet on Tuesday at PHS Stadium in Utica. RFA was third at the Tri-Valley League relay event behind Proctor and Camden.
(Sentinel photo by Alex Cooper) 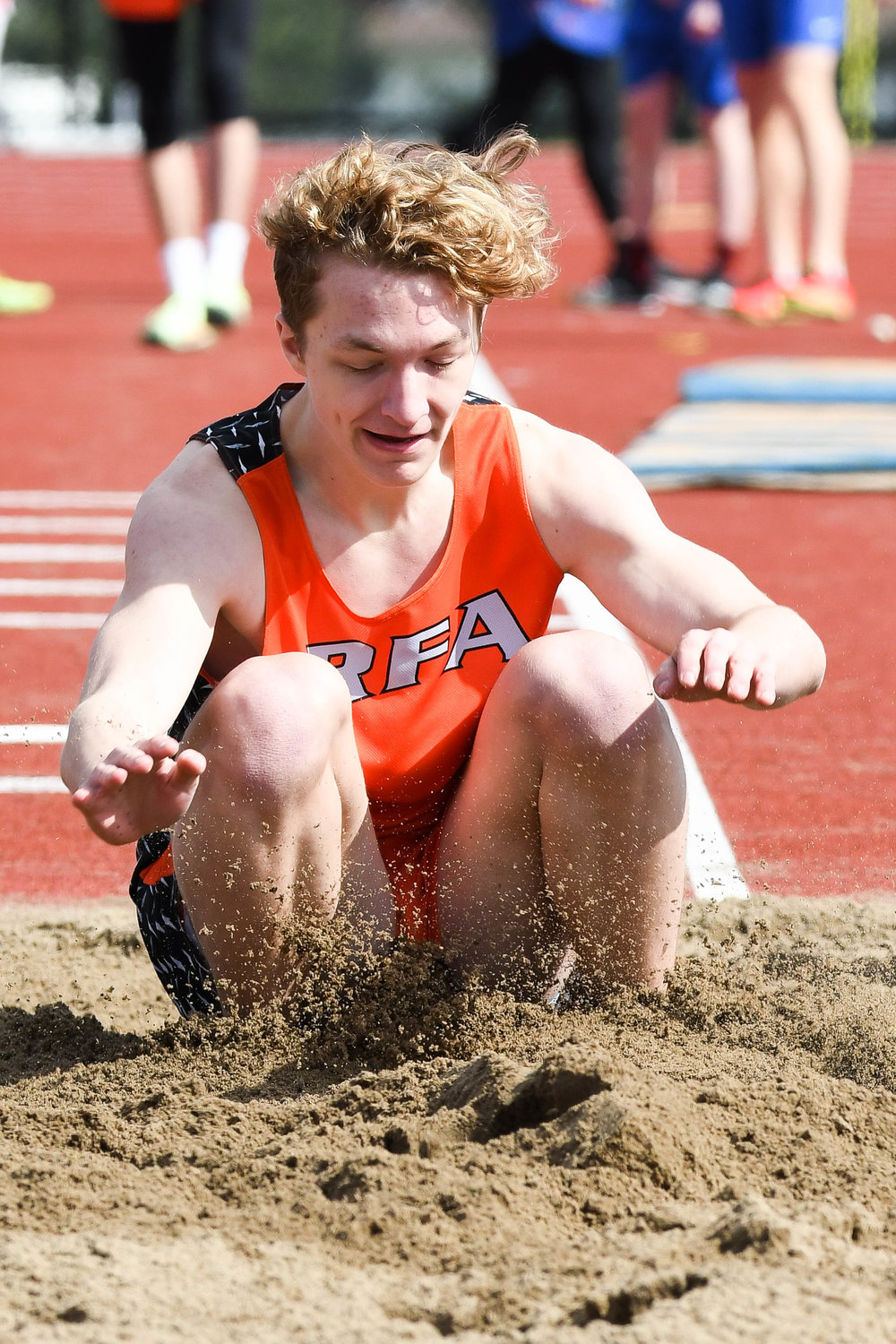 Rome Free Academy's Levi Linder competes in the long jump during a track and field relay meet on Tuesday at PHS Stadium in Utica.
(Sentinel photo by Alex Cooper) 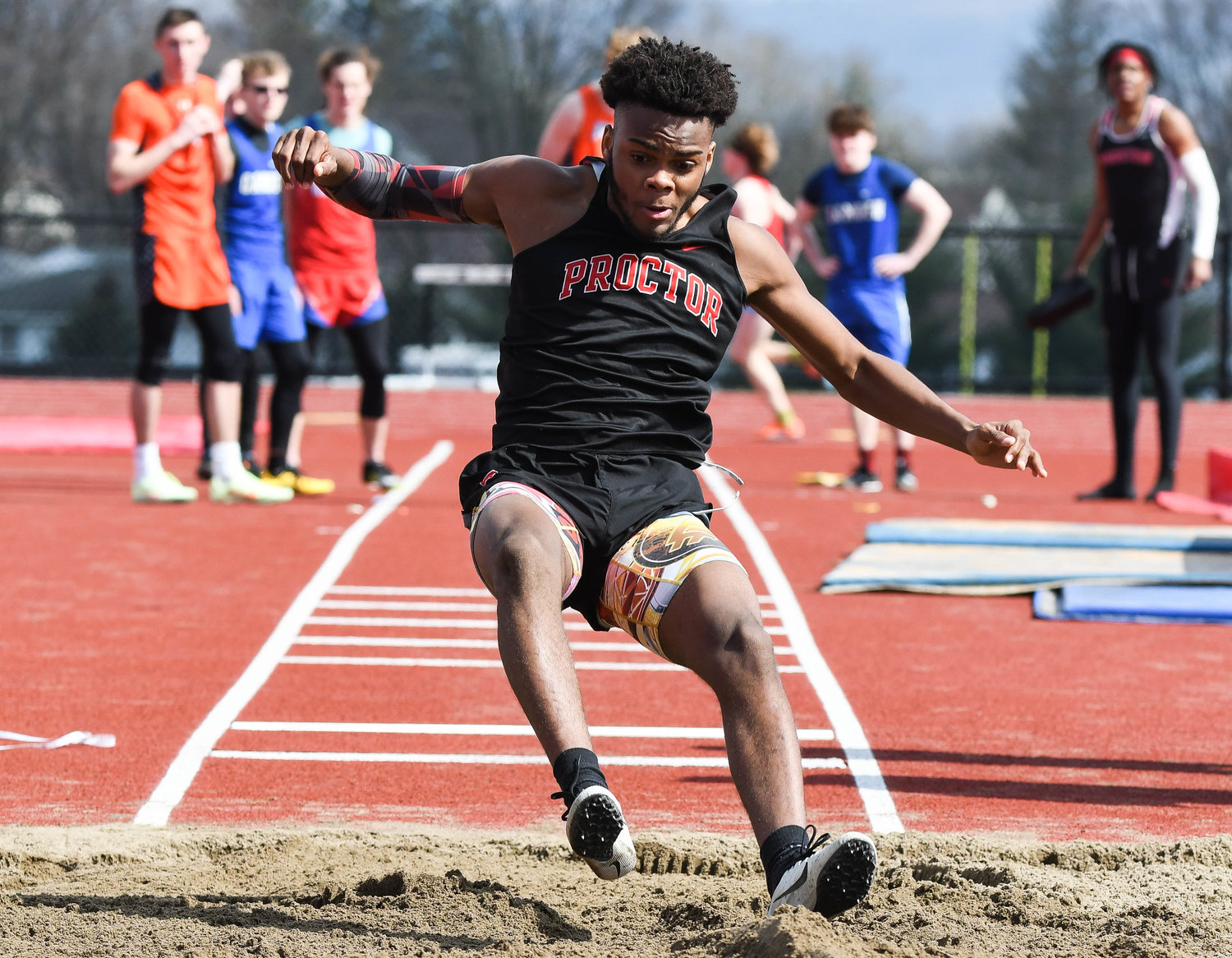 Thomas R. Proctor High School's Cristhian Cuevas competes in the long jump during a track and field meet on Tuesday at PHS Stadium in Utica. He was part of the third place relay team in the event and the Raiders won the overall event.
(Sentinel photo by Alex Cooper) 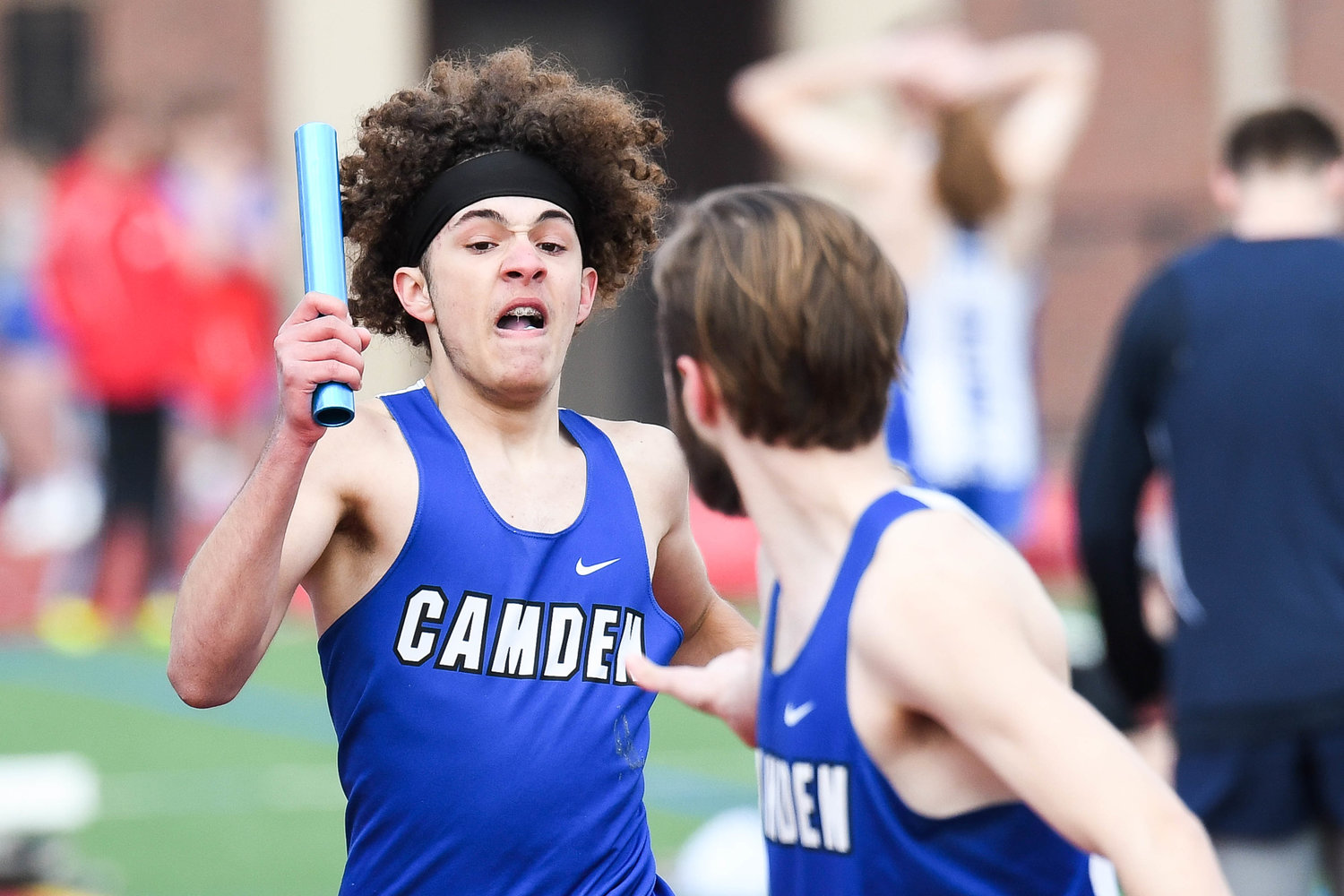 From left, Camden's Elijah Jackson hands the baton off to a teammate in the distance medley relay during the track and field meet on Tuesday at PHS Stadium in Utica.
(Sentinel photo by Alex Cooper) 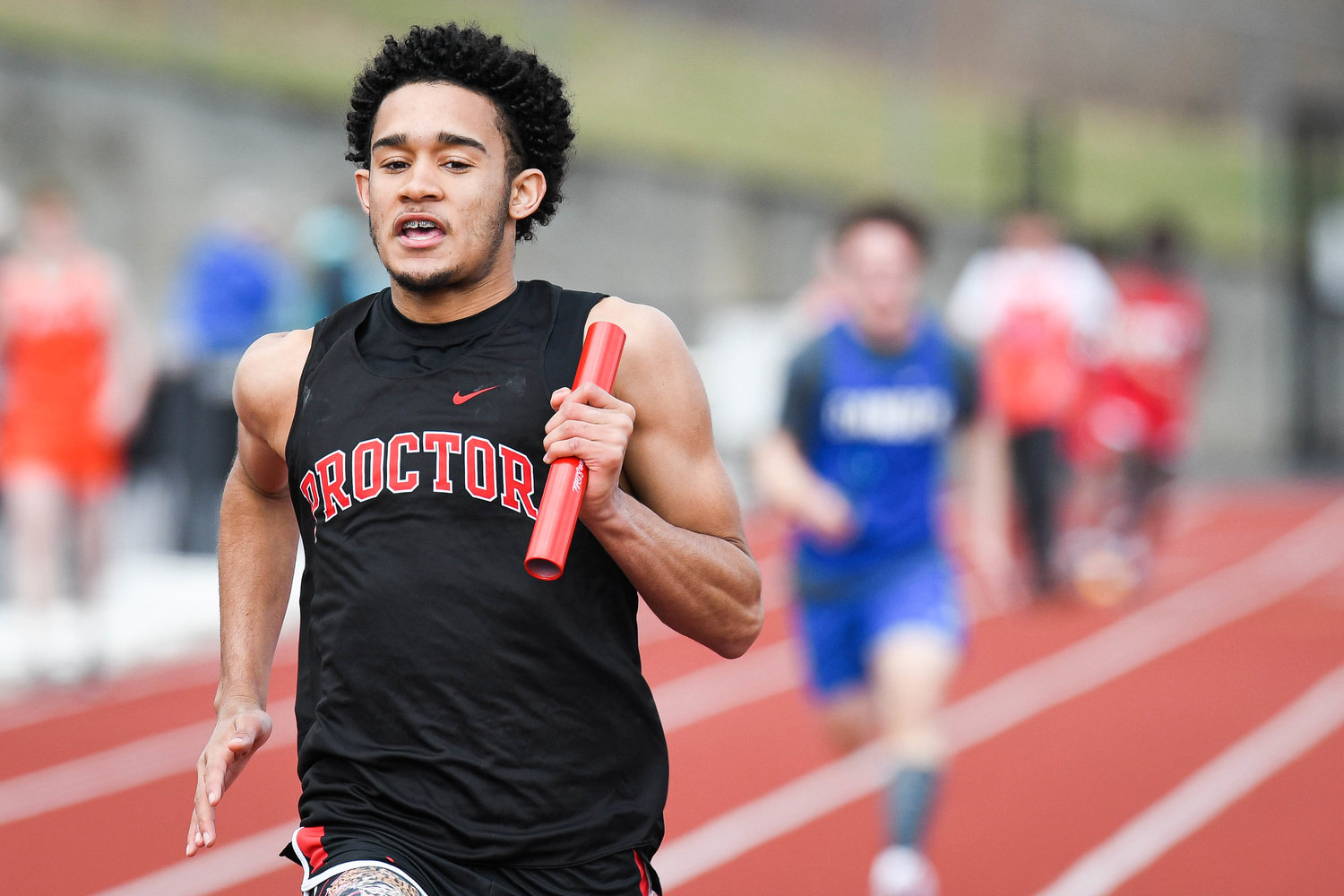 Thomas R. Proctor runner Chris Mateo competes in a 4 by 100 meter relay event during a track and field meet on Tuesday at PHS Stadium in Utica.
(Sentinel photo by Alex Cooper) 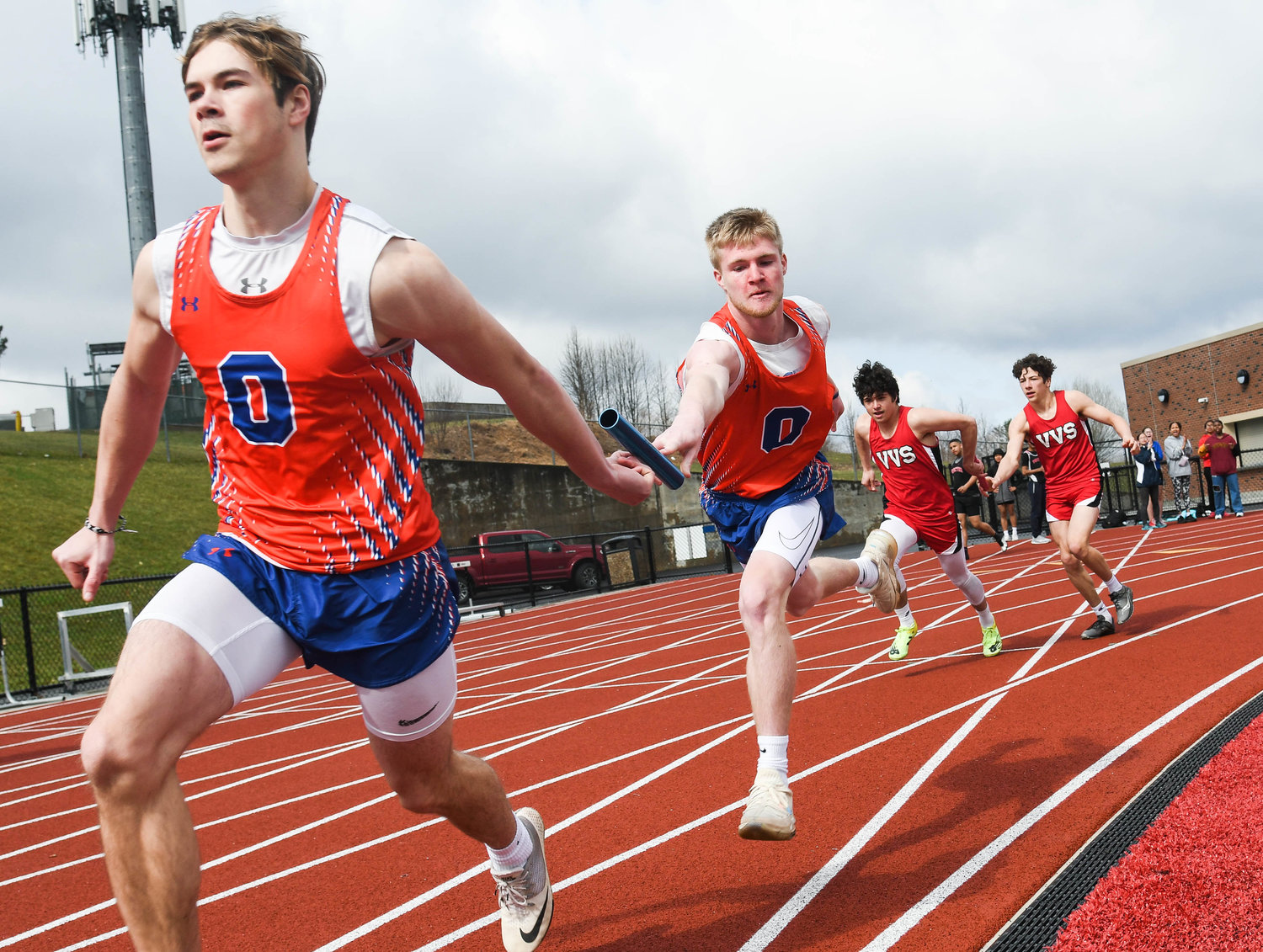 The Raiders had 95 points. Camden was second with 70 and RFA had 60 for third. New Hartford was fourth with 58 and Vernon-Verona-Sherrill was a point behind that in fifth. Whitesboro had 36 points for sixth, Oneida was seventh with 24 and Central Valley Academy had 22 points for eighth.

The Rome Free Academy softball team was limited to three hits in a 9-3 loss at Liverpool Tuesday.

Laina Beer threw a complete game for RFA, allowing nine runs, six of them earned, on 10 hits and seven walks. She struck out five.

Statistics for Liverpool were not submitted.

Brooke Musch scored all five times on base, including hitting a home run, to help Camden to a 13-9 softball win over Tallwood, Va., Wednesday, during the Blue Devils’ trip to Myrtle Beach, S.C.

It was Camden’s first game of the season, against a team that was playing its 10th game.

In the circle for Camden, Avery Prievo got the win. She went 4 2/3 innings in relief, allowing five runs on seven hits and two walks with a strikeout. Ryleigh Johnson started for Camden, going 2 1/3 innings and allowing four runs on a hit and four walks with two strikeouts.

Musch was 4-for-4 and got on base all five times. She drove in three runs and had two stolen bases. Johnson had three hits, including a double, and scored three times. Jadyn Prievo had two hits, a run and two RBIs with a steal. Kaitlyn Findlay had a single, triple and four RBIs. Kendall Musch had two hits, two RBIs and scored a run.