ROME — A 26-year-old man is accused of choking the mother of his children and threatening her with a rusty hatchet, according to the Rome Police Department. Police said George M. Rivera, of Rome, … 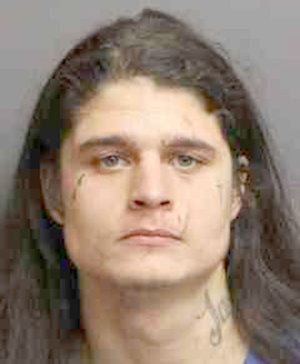 ROME — A 26-year-old man is accused of choking the mother of his children and threatening her with a rusty hatchet, according to the Rome Police Department.

Police said George M. Rivera, of Rome, went to his ex-girlfriend’s apartment at Liberty Gardens at about 11 a.m. Thursday in order to see his children. After seeing them, police said Rivera was told to leave, at which point he started shouting at his ex. Police said Rivera yelled threats at the woman and started knocking over property inside the apartment.

At one point, Rivera pulled out a rusty hatchet from inside his jacket and began swinging it around, while threatening to kill her, police stated.

Rivera then grabbed the woman by the neck and threw her to the ground, police said. Rivera sat on top of the woman and choked her with both hands, authorities said, before she was able to scratch him in the face to get him off.

Police said Rivera left the residence, and threatened to kill the woman if she called the authorities.

The woman packed up her children and left the home, police said. She called 9-1-1 from a different location, and Rivera was located Friday morning and was taken into custody.

Rivera is charged with one count each of second-degree harassment, second-degree menacing, criminal obstruction of breathing and felony first-degree contempt, for violating an order of protection, police stated. He is scheduled to appear in Rome City Court.