Over 400 years ago, in William Shakespeare’s comedy “As You Like It,” the Bard famously noted, “All the world’s a stage, and all the men and women merely players.” 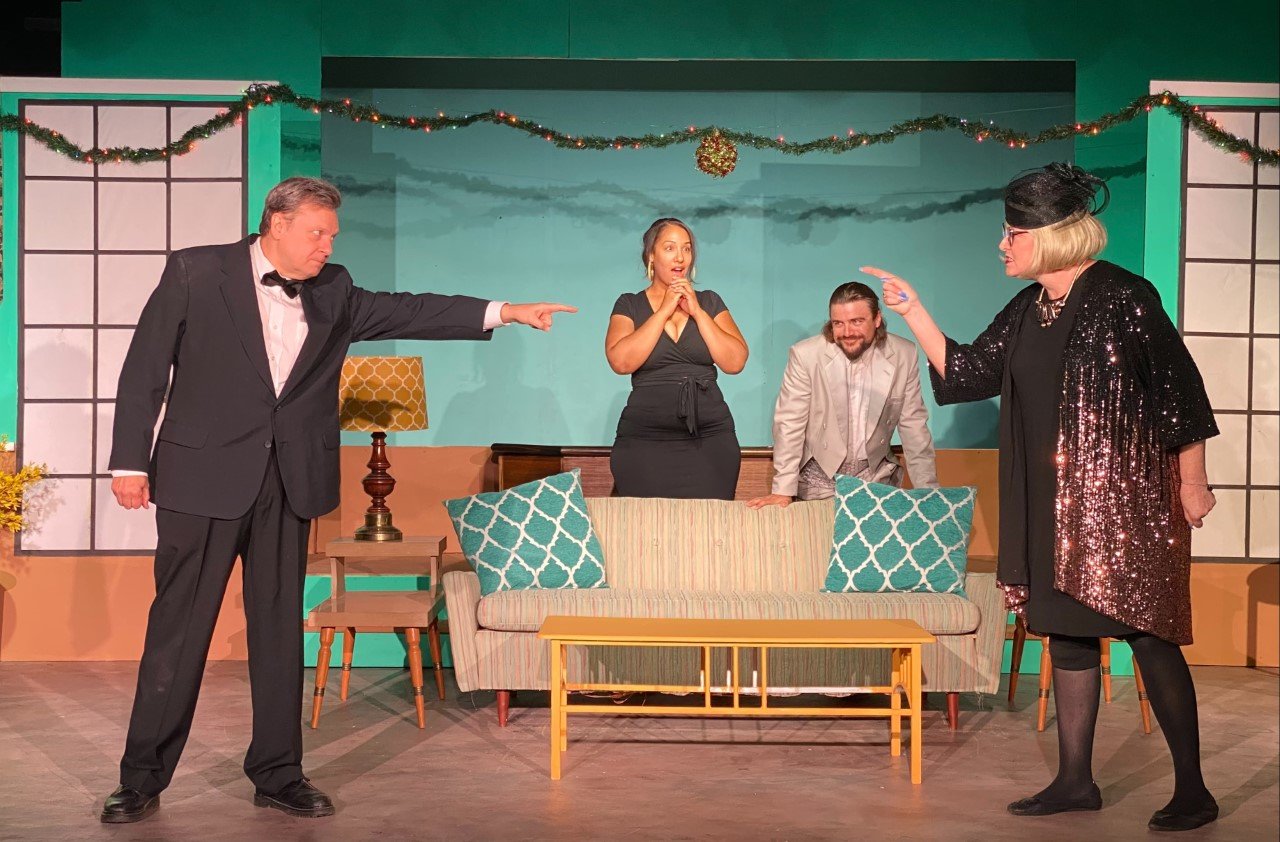 From left, Stephen Wagner, Sahrena White, Josh Beckinsale, Deborah Martin in a scene from “The Butler Did It.”
(Photo submitted) 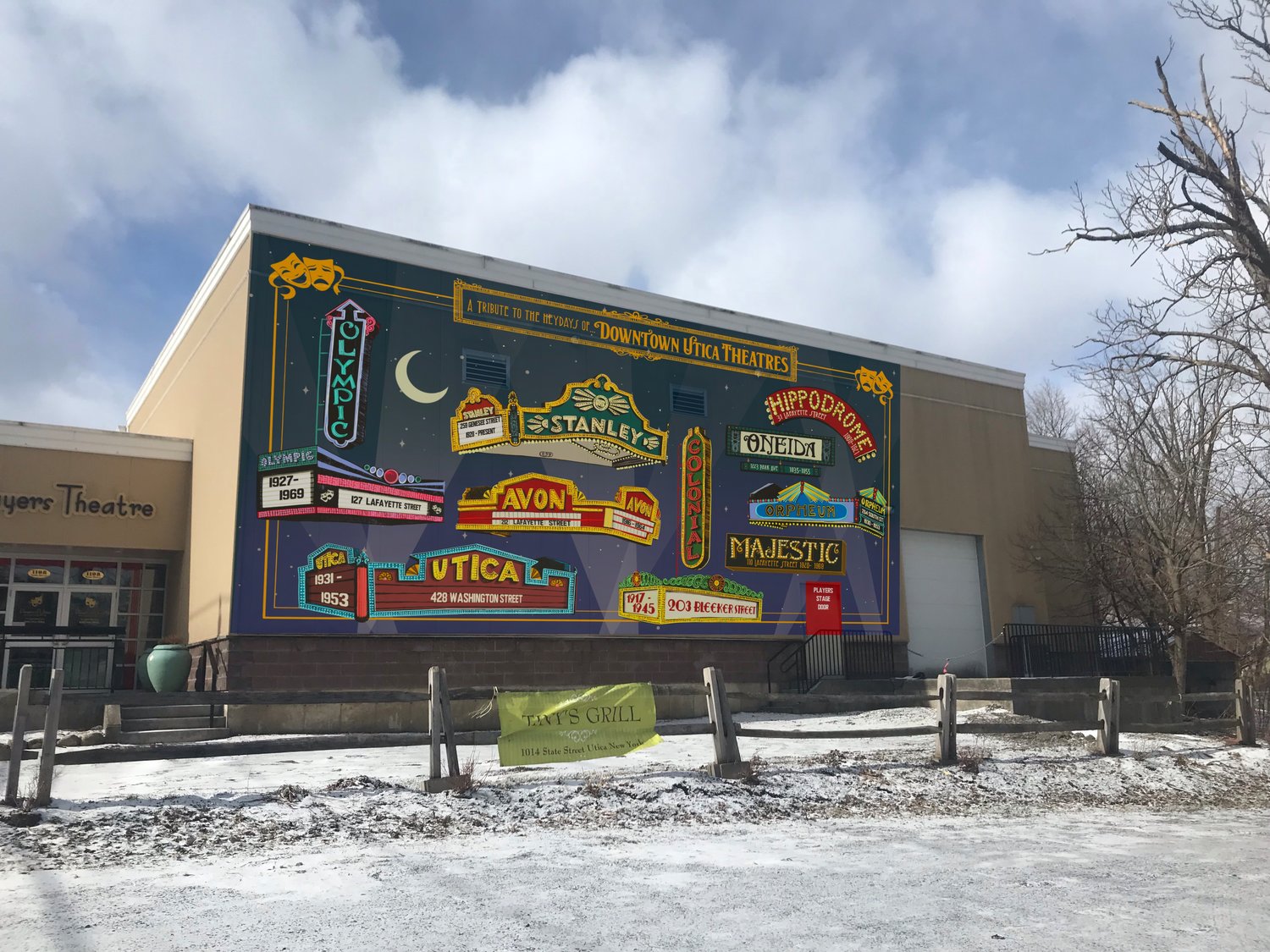 A rendition of the 30-by-50-foot mural which will soon be painted on the side of the Players of Utica building. The art will feature nine marquees of former Utica theaters.
(Courtesy of Maria Vallese, Retro Sorrrento)
Previous Next
Posted Sunday, August 28, 2022 8:30 pm
Philomena Lawrence, Special to the Daily Sentinel

UTICA — Over 400 years ago, in William Shakespeare’s comedy “As You Like It,” the Bard famously noted, “All the world’s a stage, and all the men and women merely players.”

On a smaller stage closer to home, countless dedicated volunteers — who have established Players of Utica as the oldest continuously performing community theater in New York State, plus one of the five oldest nationwide — have proven themselves to be far from “merely players.” For more than a century, their unwavering commitment to providing first-rate live performances has provided Mohawk Valley theater-goers with dramas, comedies, musicals, and original plays.

As Art Felshaw, Players of Utica’s board of directors president and director of several plays, states enthusiastically, “I’m most proud of Players’ longevity. When you get a group of people together from all walks of life and with a wide range of skills to work toward a single goal, that’s community!”

From its modest beginnings in 1907 as The Amusement Club, the theater has remained true to its mission statement: “To present entertainment that enriches, excites, and challenges all members of our diverse community.” The list of time-spanning performances includes musicals “The Instantaneous Minstrels” (1914) and “Godspell”  (2017); classics “Little Women” (1937) and “A Man for All Seasons”  (2018); dramas “Macbeth” (1940) and “The Crucible” (1974); and comedies “Barefoot in The Park” (1985) and “I Hate Hamlet”  (2021). Sold-out performances of “Always ... Patsy Cline,” starring veteran actors Jennifer Wratten and Hana Meyers, closed out the 2021-2022 season.

While alternating roles as actor and director in Players’ musicals, comedies and dramatic productions for more than two decades, Marilee Ensign’s “dream roles” have included Eleanor of Aquitane in “The Lion in Winter” and Dr. Martha Livingston in “Agnes of God.” She animatedly describes her dedication to the theater: “I derive a great deal of pleasure in practicing my craft. No matter how much experience one has, there is always room to grow. And luckily, as I age, the roles are more interesting and challenging! Besides, working and playing with friends who have become a theater family is always the best!”

Since its inception, the Players of Utica have called various sites “home” until 2009, when the troupe settled into a newly built theater at 1108 State St. in Utica. Currently, signage on the building’s exterior wall simply reads “Players Theater,” accompanied by the traditional masks depicting comedy and tragedy. However, thanks to a grant obtained by Rust to Green, a local nonprofit organization that raises funds to revitalize downtown areas, a new 30-by-50-foot mural will add eye-catching pizazz to the theater’s large wall facing State Street. Local muralist Maria Vallese will paint replicas of nine historic marquees representing the Golden Age of Downtown Movie Theatre from the early 1900s to the mid-1950s.

“The mural not only honors the heyday of theaters in downtown Utica, it also celebrates the 25th anniversary of Utica Monday Night,”observes Lynne Mishalanie, founder of the popular summer program that provides live entertainment, art exhibits, and guided walking tours of renowned local landmarks. Mishalanie, who serves on the theater’s board of directors and has performed in many Players’ musicals, adds, “Not everyone can afford to attend shows in New York City, but we provide the opportunity for people of all economic levels to experience theater at its finest close to home.” She also points out the theater’s fitting location within the Oneida Square Arts District, which includes the Stanley Theater and Munson-Williams-Proctor Arts Institute.

Prompted by the consistently high level of productions, Utica resident Joanne Longo has remained a loyal season ticket holder since the 1960s. “It is great that a community our size offers the public such excellent theater with actors who are as good as, if not better than, the ones on Broadway,” she notes approvingly, adding, “Besides, ticket prices for the shows are certainly not exorbitant.”

Along with showing their support for Players of Utica by attending performances season after season, the community is encouraged to take active roles as volunteers. Vice-president of marketing and development Stephen Wagner, who also frequently directs plays, emphasizes that the theater welcomes assistance from local residents as stagehands, set builders, ushers, program distributors, and concession stand servers; those working on the day of the performance can also enjoy watching the show for free.

At times, unanticipated circumstances have required Players of Utica to rely upon a time-tested thespian motto — “The Show Must Go On.” For example, on May 5, 1999, a devastating fire destroyed the theater, then located at 19 Oxford Street in New Hartford. (The cause of the fire remains the largest unsolved arson case in Oneida County history). Undaunted, the valiant troupe, wearing costumes generously loaned by the Ilion Little Theater, performed the play the next day — on schedule — at the Clinton-based Spring Farm Cares.

A repeat performance of those heroic efforts played out 20 years later when COVID-19 pandemic restrictions inspired the innovative actors to launch Players Theater At Home. The program offered subscribers a variety of continuous online entertainment, including virtual productions of plays, talk shows, musicals, and cabaret performances. As Wagner points out, “It costs more than a hundred dollars a day to maintain the facility, open or not. The virtual shows were an ideal way to hold our audiences’ interest, keep our actors involved, and raise much-needed funding.”

Currently, the theater board’s far-reaching plans include upgrading the larger, 250-seat theater, which will entail a great deal of time, effort, and funding. However, Wagner expresses his confidence in finding the resources needed: “We are continually working towards reaching out to new audiences, especially young people, to ensure that Players of Utica not only stays strong but keeps growing.”