Starting tomorrow, it’s no more “paper or plastic” at New York stores. It’s “your own bag, or paper?” Or nothing at all. Sunday is the effective date of New York’s Plastic Bag Waste … 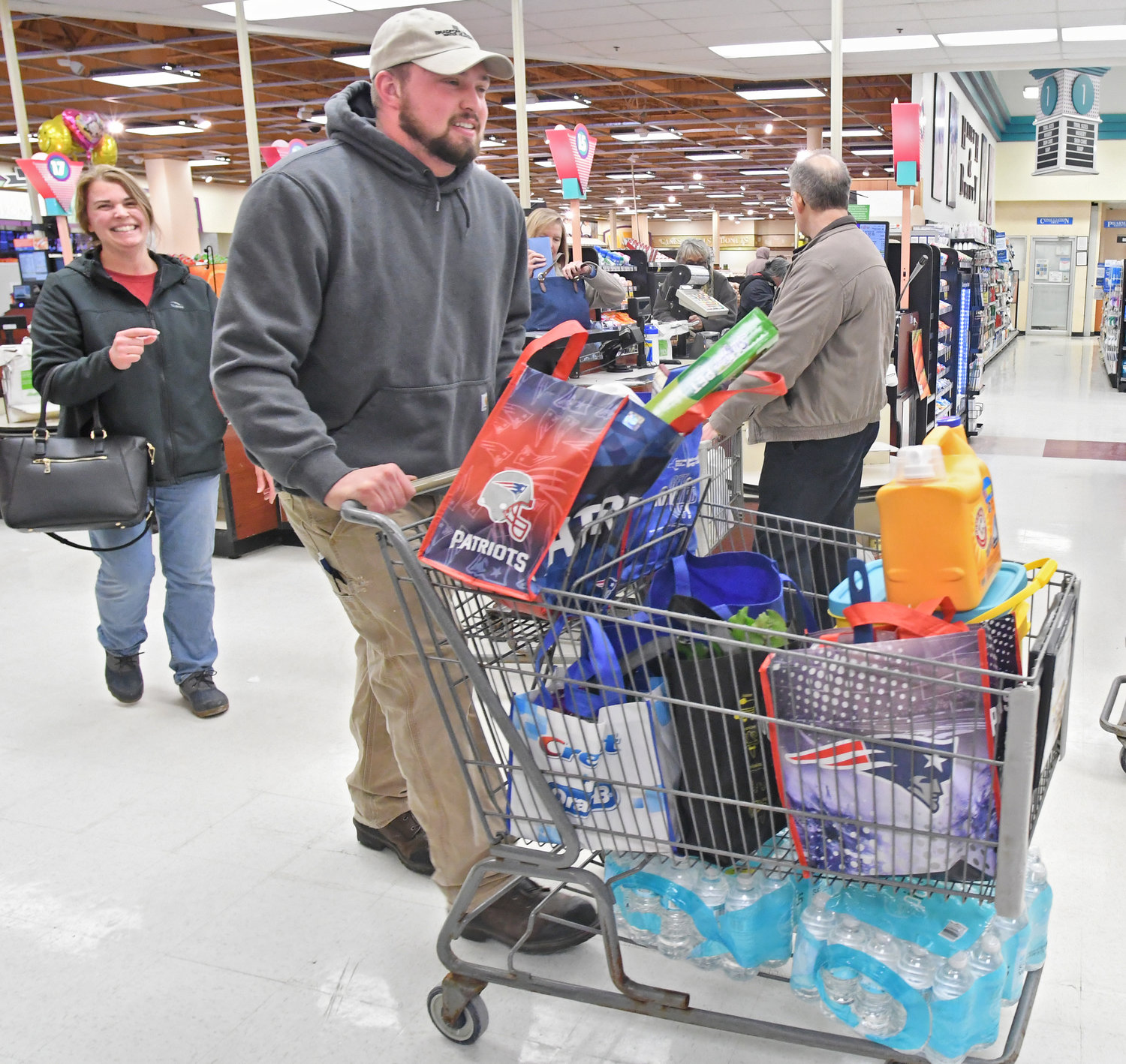 BAGGED — Ed Bentley, followed by his mother Debbie Bentley, carts away groceries that he bagged up in reusable bags Friday afternoon at Price Chopper on Black River Boulevard in Rome. Most of the Bentleys’ bags are from other stores, but Price Chopper says the company’s re-usable bags start at 50 cents each.
(Sentinel photo by John Clifford) 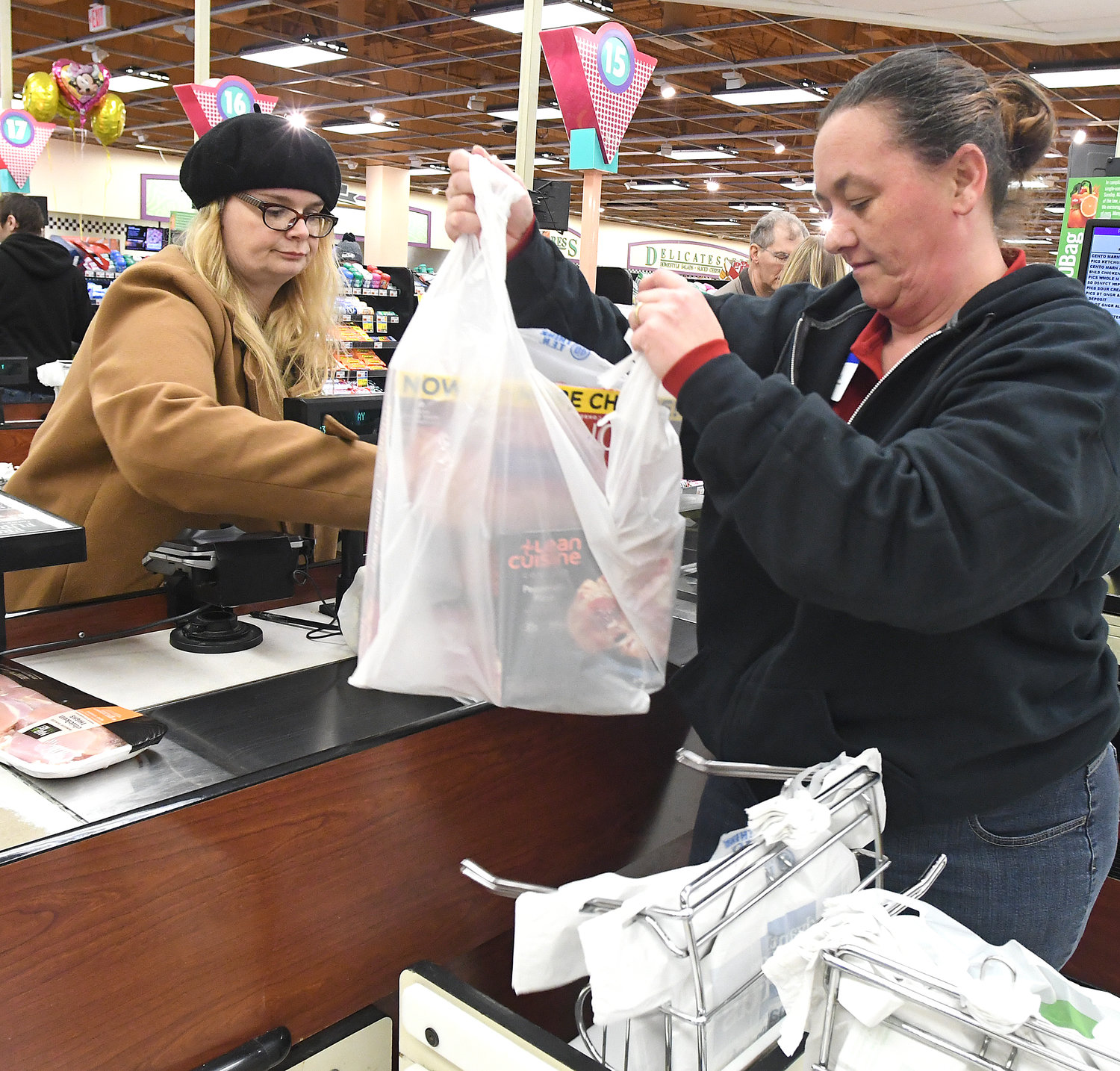 LAST BAGS — Price Chopper employee Charlene Whaley uses store plastic bags for customer Holland Saenger. When asked what she would be doing for bags Saenger laughed and said, “Stop shopping.” And then, “I’ll figure it out.” Whaley has been a Price Chopper employee for two weeks. She said a customer from Germany recently noted that back home, she normally carried her own container for grocery shopping.
(Sentinel photo by John Clifford) 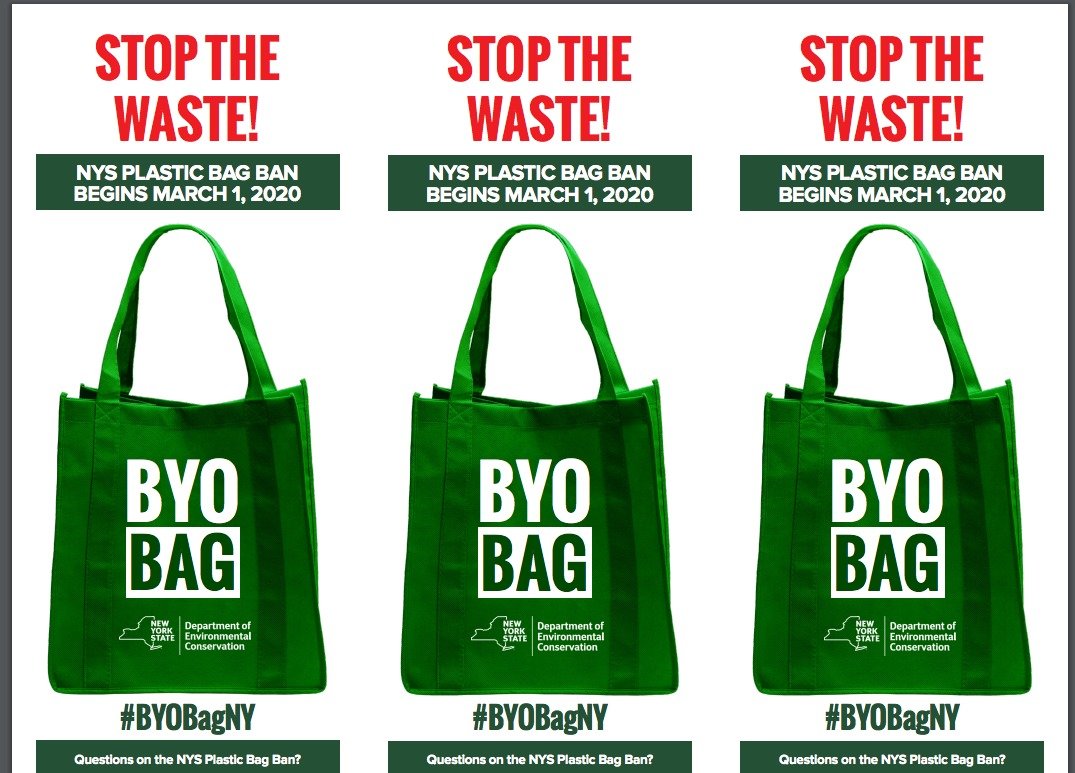 Starting tomorrow, it’s no more “paper or plastic” at New York stores. It’s “your own bag, or paper?”

Or nothing at all.

Sunday is the effective date of New York’s Plastic Bag Waste Reduction Act. It prohibits the distribution of plastic carryout bags by anyone required to collect the state sales tax, or basically any store.

The law does not ban plastic bags outright. It prohibits only the distribution by retailers, who could face a civil penalty up to $250. New York will wait until April 1 to penalize stores that violate the ban.

Many uses are exempted, according to the state Department of Environmental Conservation’s list:

• For containing or wrapping uncooked or non-prepackaged food, flowers, or plants, and for food sliced or prepared to order, and for carry-out and delivery from restaurants.

• For packaging of products sold from bulk containers, such as fruit and vegetables, candy, small hardware items like nuts and screws, live insects and fish requiring a waterproof bag.

• For newspapers delivered to subscribers.

• From a pharmacy to carry prescription drugs.

• And reusable bags, defined as cloth or washable fabric or washable non-film plastic, and able to be used at least 125 times.

The goal is to reduce the number of film plastic bags that wind up as litter, in waterways, taken by the wind into trees and shrubs or otherwise left in the environment. A state task force on plastic bags said the average U.S. family uses 1,500 single-use bags a year, and each bag is used on average just 12 minutes, but because they degrade slowly in normal conditions, they linger in the environment, potentially harming fish and other wildlife. They also clog recycling equipment, driving up costs of recycling other materials.

The law was adopted last year as part of the state budget for the current fiscal year. Critics said it would drive up cost and aggravate consumers.

“A plastic bag ban will not promote the utilization of reusable bags and will in fact increase the use of paper bags. Studies have proven that paper bags cost more to generate and transport, which impacts the environment at a significant rate,” the Food Industry Alliance of New York said in response to Gov. Andrew Cuomo’s initial proposal in early 2019.

Some environmental advocates said it did not go far enough and that recently released detailed regulations allow bags made of thicker plastic to be given out as re-usable but which will be discarded after a single use.

Large retailers remain required to take used plastic-film bags, which when collected in bulk can be recycled into other uses, such as certain kinds of outdoor furniture.

Most retailers have been selling reusable bags, often with their own name or logo, for years, and are pushing those. Retailers are free to give out non-plastic film bags, primarily paper, or to charge for them.

The state allowed localities — cities and counties — to require a five-cent per bag fee, which was then to go to public awareness campaigns and subsidizing reusable bags for people who qualify for public assistance, who are exempt from the fee as well. Oneida and Madison counties did not, so retailers are free to give out paper bags or charge for them.

The Food Industry Association of New York Vice President of Government Affairs Kristina Wieneke said the trade group supported instead a fee on paper and plastic bags, similar to what was done in Long Island’s Suffolk County on all bags given out by stores to reduce use of single-use bags and transition consumers to reusable bags.

Instead, the group predicts, retailers will face a shortage of the 4 billion paper bags expected to be needed and a financial burden of bags that cost seven to eight times more than plastic for an industry with profit margins typically no more than 2 percent.

“The patchwork nature of the opt-in law is an administrative nightmare for retailers that operate across county lines,” Wieneke said. “Secondly, the state’s approach will result in a reliance on paper bags, which will have a major impact on businesses from both a supply and cost perspective.”

Policies will vary widely among retailers, Wieneke said, with many retailers charging a fee on paper bags to have a consistent state-wide policy.

That’s the approach by Tops and Price-Chopper, which each has a large supermarket in Rome.

Tops three-quarters of its stores in New York and will charge 5 cents per paper bag, splitting the revenue with local charities such as food banks, said Kathy Sautter, public and media relations manager for Tops Friendly markets.

Schenectady-based Price Chopper is doing much the same. The company, which has a store in Rome on Black River Boulevard, will charge a five-cent fee for paper bags to reduce waste and discourage their replacing plastic bags in favor of re-usables, which it is selling for as little as 50 cents. In addition, other reusable bags are discounted, and customers using the company’s rewards program can build up credits for free bags.

“We’re not focused on incentives that make the purchase of a paper bag more attractive,” said Mona Golub, vice president for public relations, consumer and marketing services. “Rather, we’ve invested in that which directly supports our customers as they select the better long term solution.”

Price Chopper expects some frustration at check-outs among customers who are not prepared, and that packing bags of different sizes and shapes may slow stores’ front-end process, Golub added. The company said it has invested in signs, advertising and marketing to help fill what it believes is a public-education gap on the law left by the state.

“It’ll be a learning curve all the way around, which we can’t really gauge until we’re in it,” she said.

“We believe that our role in helping to facilitate behavioral change on this front thereby diminishing reliance on disposable bags – both paper and plastic – will, in time, benefit the greater good.”