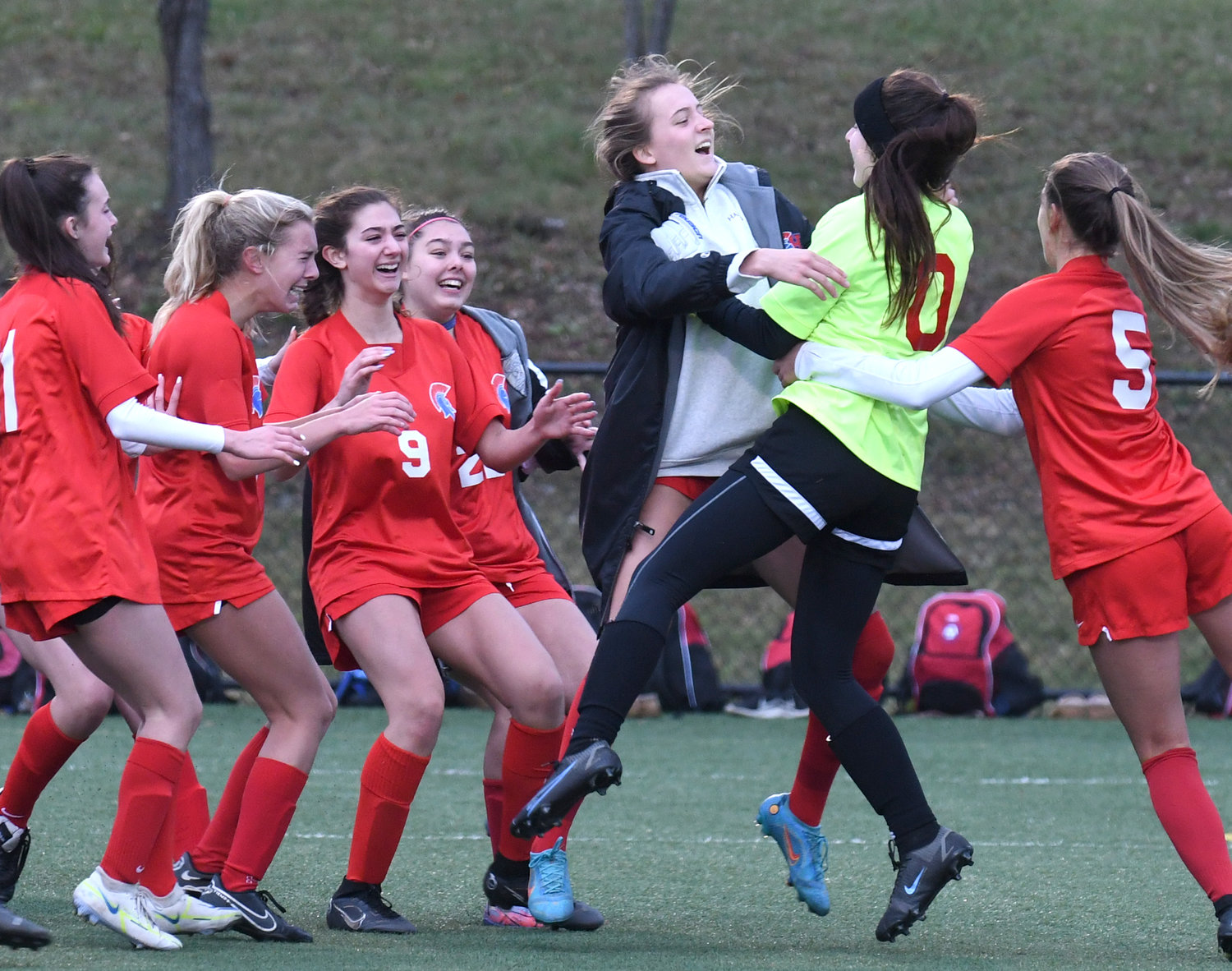 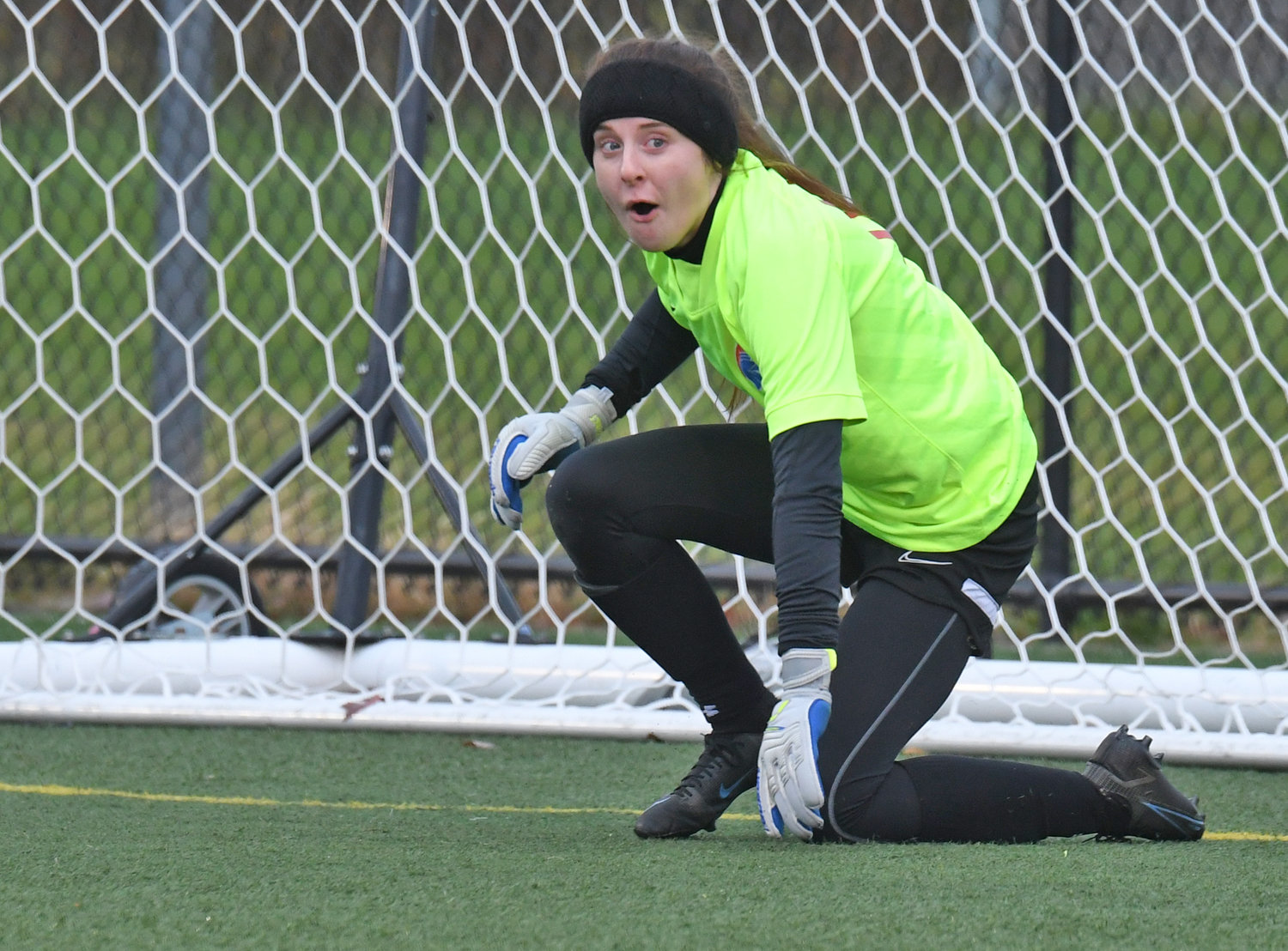 New Hartford goalkeeper Savannah Cole reacts to making the save in the penalty kick round Saturday afternoon at Tompkins Cortland Community College. New Hartford advances to the state Class A championship game at 10:30 a.m. Sunday at the same field.
(Sentinel photo by John Clifford) 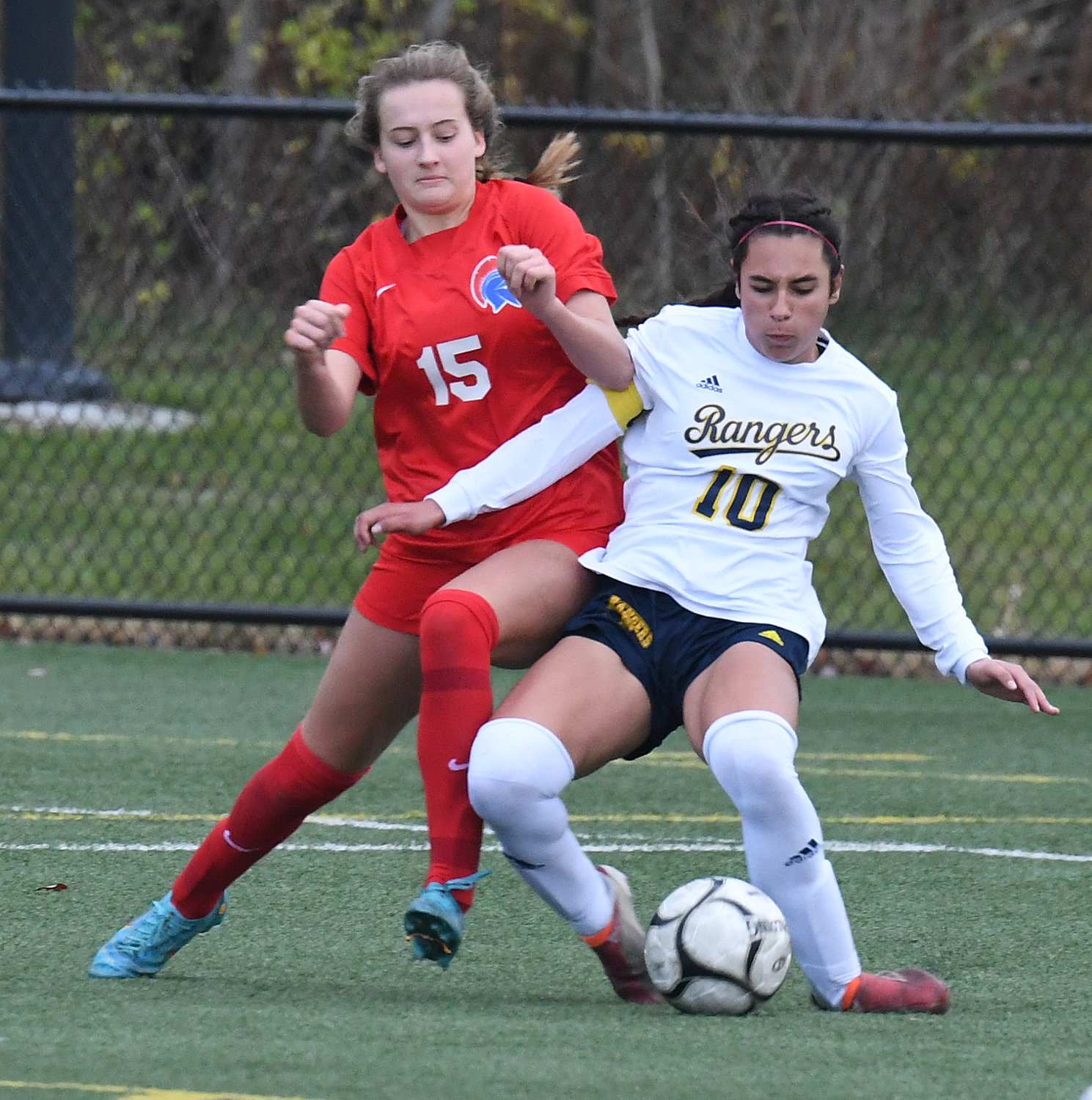 New Hartford's Anna Rayhill and Spencerport's Kendall Mesh try to control the ball in overtime of the state Class A semifinal game Saturday at Tompkins Cortland Community College. The teams were tied 1-1 after regulation.
(Sentinel photo by John Clifford) 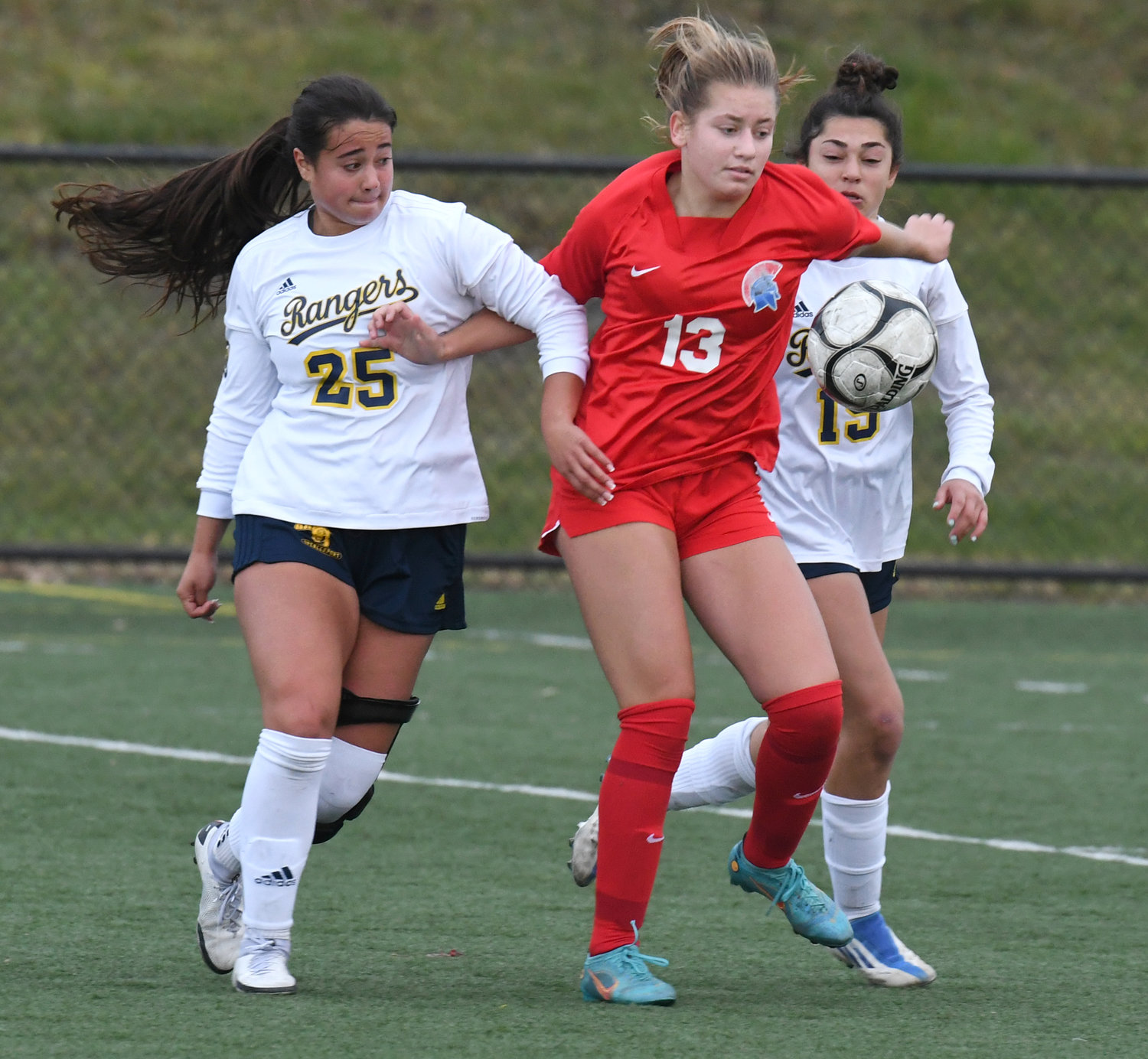 New Hartford's Willa Pratt fights through the defense of Spencerport's Isabella Fiorillo and Jamie Keens in overtime of the state Class A semifinal game Saturday at Tompkins Cortland Community College. Pratt had a goal in the second half.
(Sentinel photo by John Clifford) 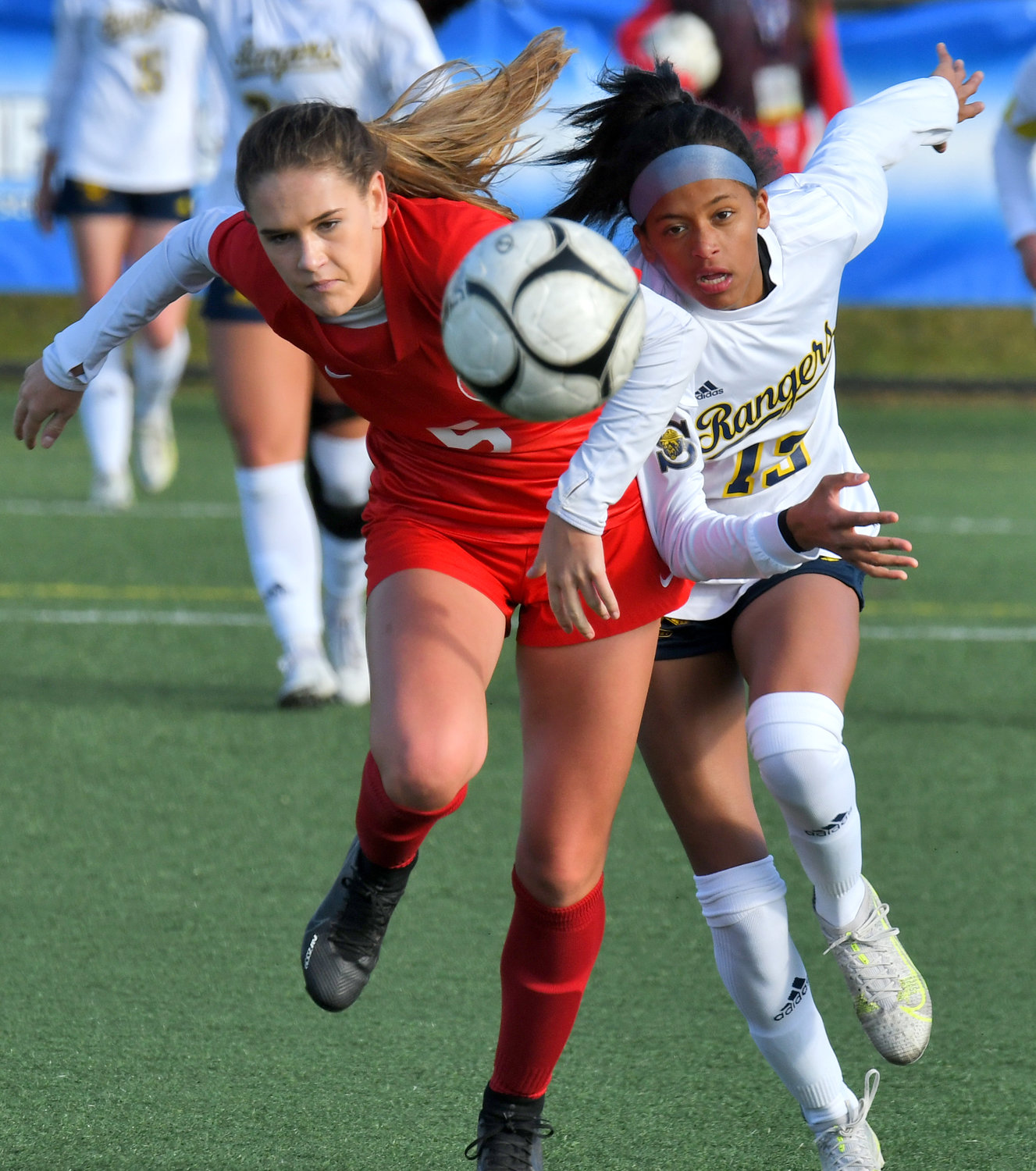 Classmate Anna Rayhill felt the same for the undefeated and defending Class A state champion Spartans.

That's to be expected after conceding the fifth total goal of the season with about 10 minutes remaining and needing a pair of 15-minute overtimes and six rounds of penalty kicks in one of the biggest tests New Hartford has faced over the last three seasons in Section X’s underclassmen-laden Spencerport to decide a winner for the right to play for a state title.

New Hartford scored on each of its six kicks and Cole got enough of her foot on Spencerport’s sixth and final attempt to help the Spartans edge the Rangers in a dramatic state final four game at Tompkins-Cortland Community College.

Greetings and salutations from Dryden where @NHGirlsSoccer about to do that soccer against Spencerport.

NH trying to push its undefeated record to 59 consecutive games, get back to state title game for second time in as many autumns.
Winner of this game takes on Albertus Magnus pic.twitter.com/cowlZPTUxZ

“Probably in my life, it is the most stressful game. 100 percent,” said Cole, who dove left on standout Aleena Solano’s low-center shot and got enough of her foot on the ball to deflect it out. “I speak for the seniors: Just knowing that this could be our last game and technically two more wins from another state championship, that’s just what made it (stressful). We were so close, we weren’t letting it fall through.”

Senior Willa Pratt – who scored in the second half to give New Hartford the lead – as well as classmates Biddie Clive, Talia Vitullo and Rayhill and sophomore Amanda Graziano had little trouble converting on their PK attempts. Senior defender Mia Roberts slipped in a low shot to the right side past Spencerport’s Cate Burns (four total saves) to put New Hartford ahead before Cole’s stop drew a celebration with her Spartans teammates.

“Usually, we don’t get into those tight games because we’ve been undefeated for so long,” Cole said. “I knew it was their second round of shooters. In a high-stress situation like that, she was going to go to her more comfortable-side. … I dove and it got my foot, so I kicked it.”

Cole (three saves) had gotten pieces of two previous kick attempts that deflected in, including one off the post.

“We were all just rooting for Savannah. She went the right way and she got a good chunk of the ball and come up huge for us,” said New Hartford coach Frank DuRoss Jr, who noted a big game last fall by Cole in a 2-1 win in the Class A title game. “That’s what you need: You need (your goalkeeper) to make a couple big saves in a game. If you’re typically the dominant team and on your front foot, she doesn’t have to make a ton of saves, usually. But, we need her in certain instances to do that. That’s what she did and always does.”

The state record is 64, put together by this Spencerport program from 2016 to 2018. Notably, Spencerport’s mark ended at Tompkins-Cortland’s field. Spencerport (17-1-3) also lost in the 2021 state semifinals on penalty kicks.

“It is definitely not our prettiest win,” said Rayhill, the team’s leading scorer (38 goals) who had trouble at times finding space. “II feel like as a team we came together (during PKs). At that point, it was on all of us because we had multiple opportunities in the game we should have put in.”

Although the Spartans appeared to have the better chance in the first half they found themselves in a battle with Spencersport.

While a physical Spencersport team gained momentum in the second half, New Hartford broke the 0-0 game as Pratt settled a bouncing ball after a direct kick for her 25th goal of the season with 27 minutes left.

Spencerport continued to threaten with help from Solano, nearly tying the game after a shot from the right side glanced off the far left post with 17 minutes remaining. It was among at least three posts hit by the team in the game. Lindsay Lenhard helped force overtime later, slipping the ball past Cole after the keeper came off the line to challenge her.

“We’re thinking a lot about recovery right now and being able to come back out and play early (Sunday),” Rayhill said.