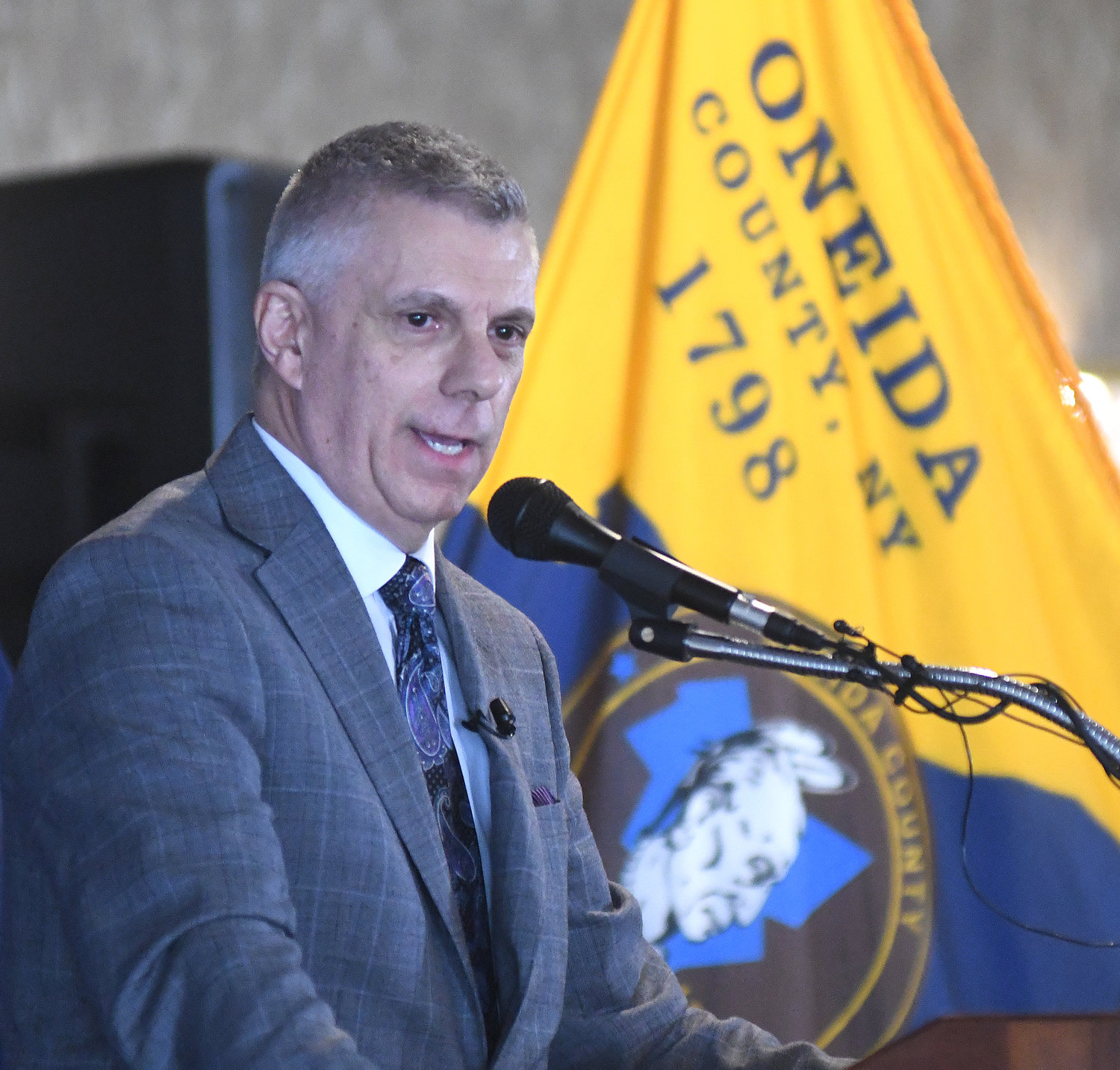 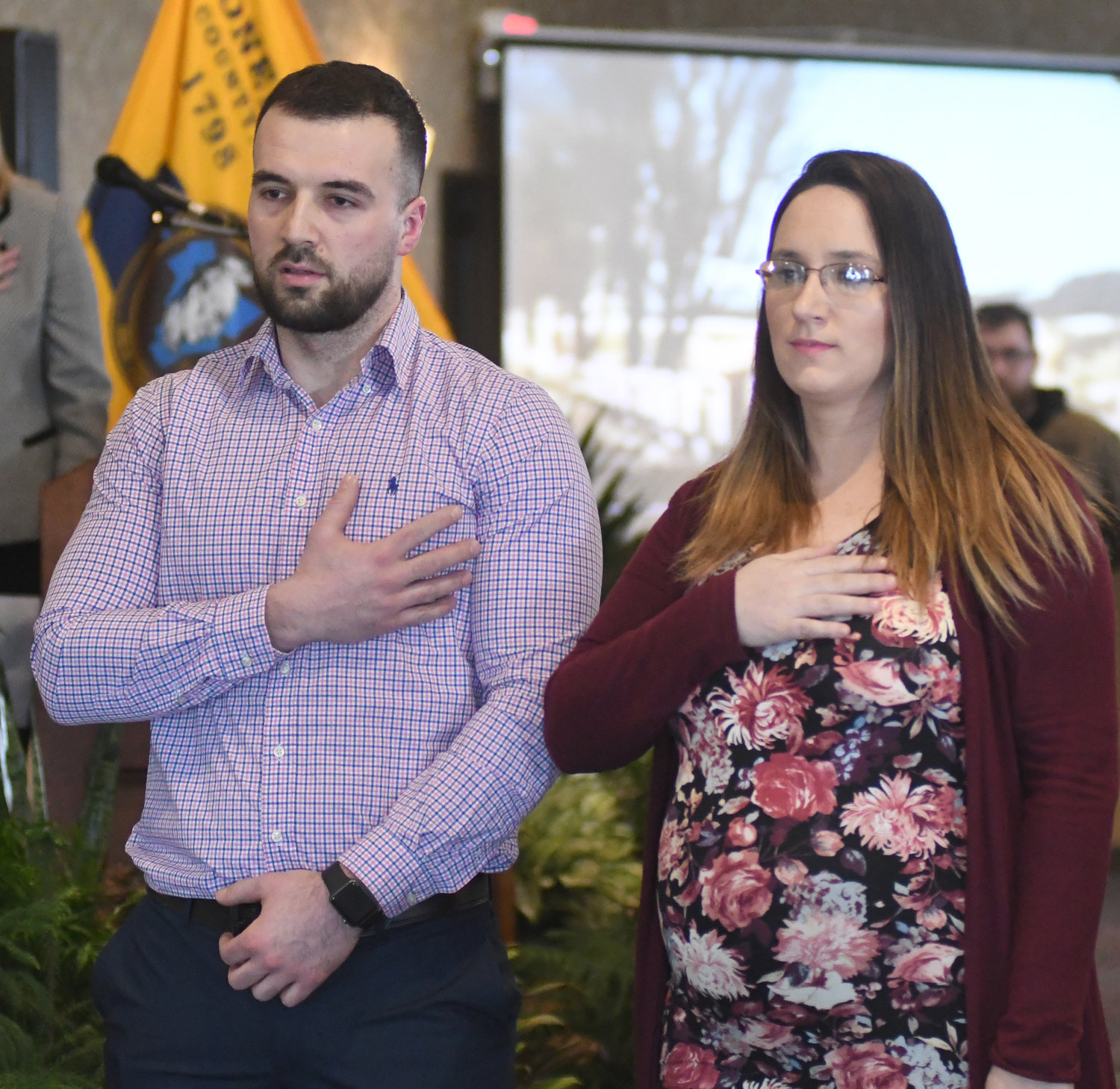 LEADING THE PLEDGE — Edin and Mahira Patkovic lead the Pledge of Allegiance at the start of Tuesday’s State of the County speech. During his speech, Oneida County Executive Anthony J. Picente Jr. discussed the Patkovics and used their story to highlight the need for services for refugees, including English lessons for non-native speakers. 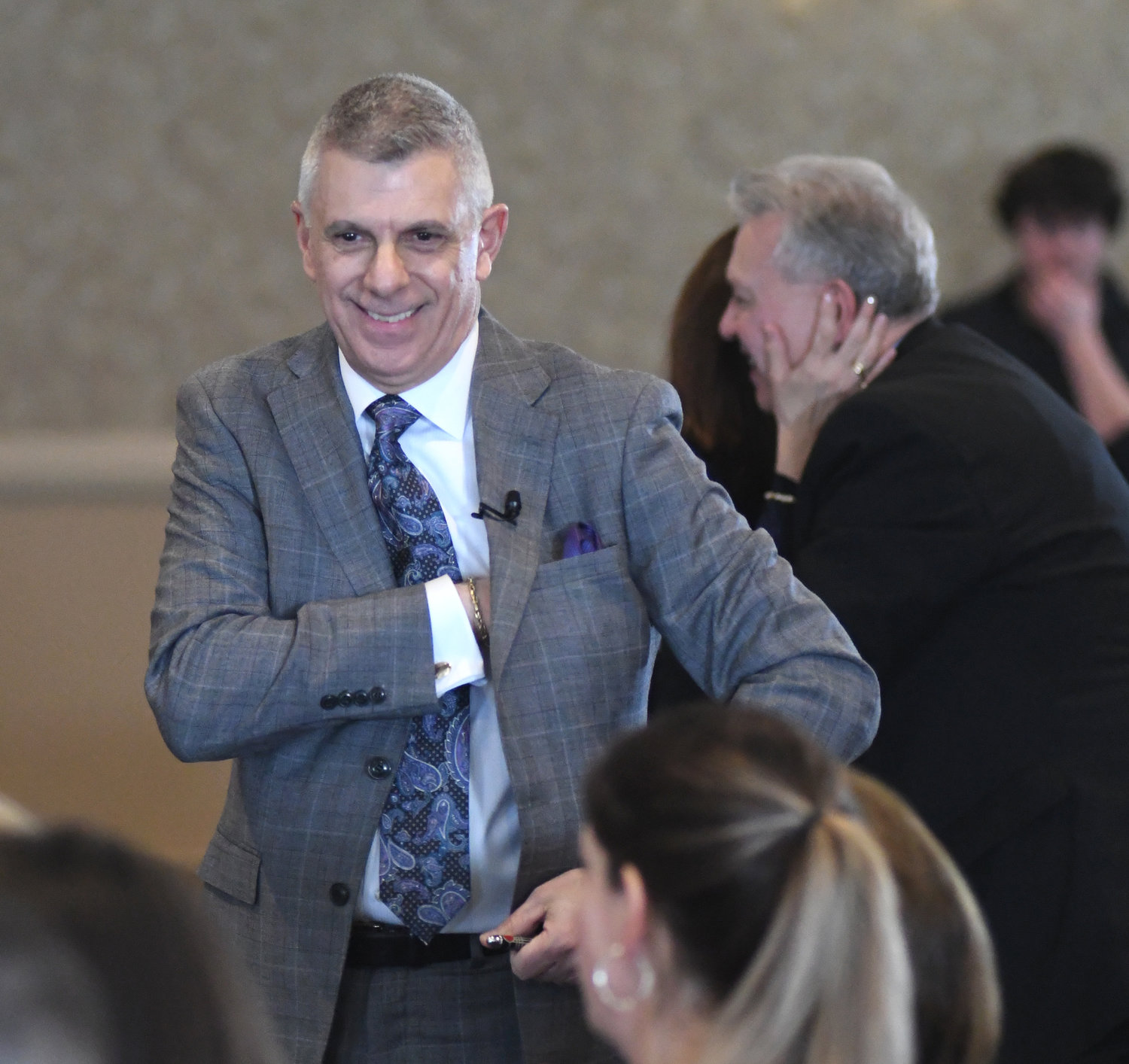 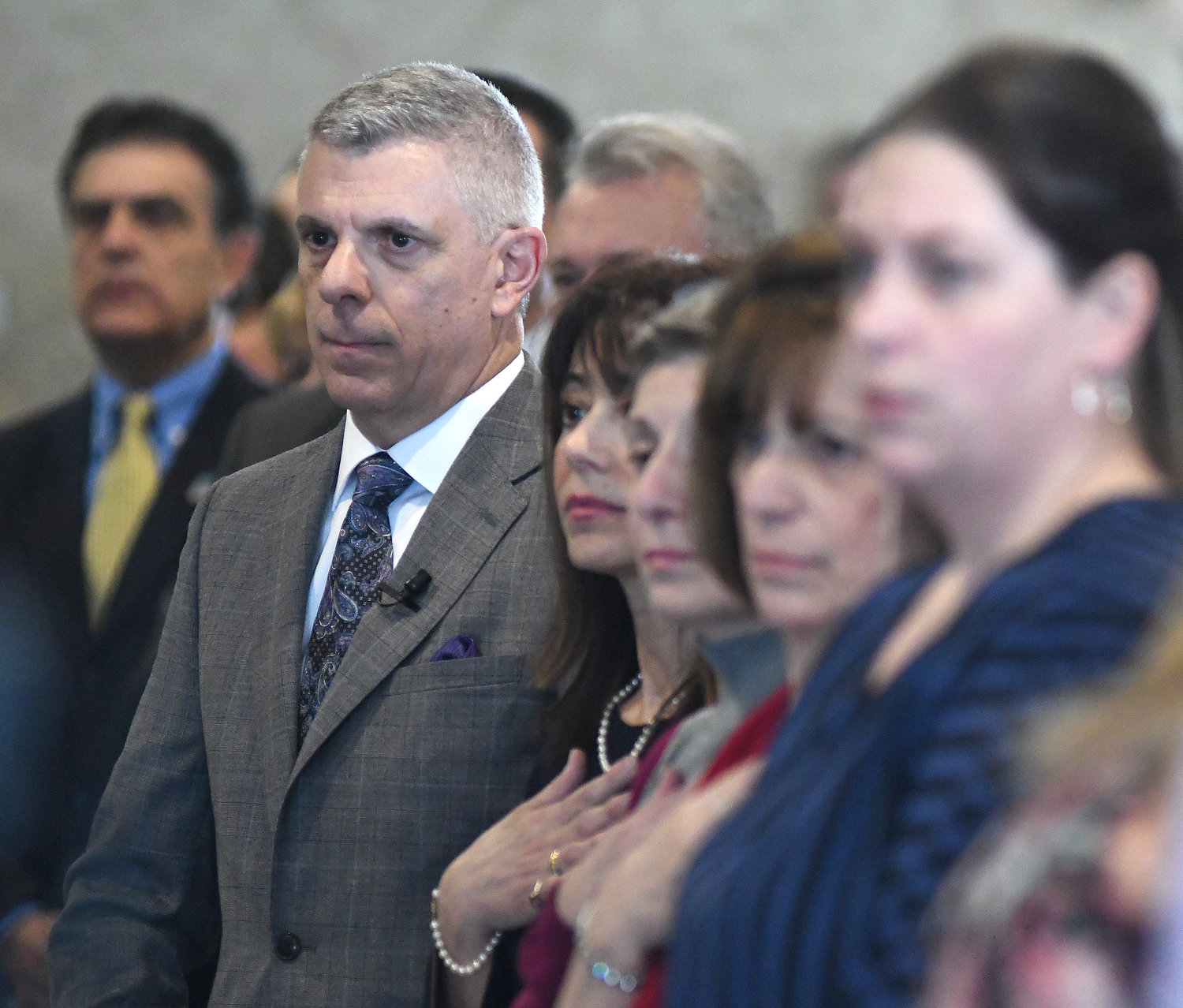 County executive Anthony Picente during his state of the county speech Tuesday afternoon. His wife Eleanor is to his left one of of his sisters as they stood for the pledge
(Sentinel photo by John Clifford) 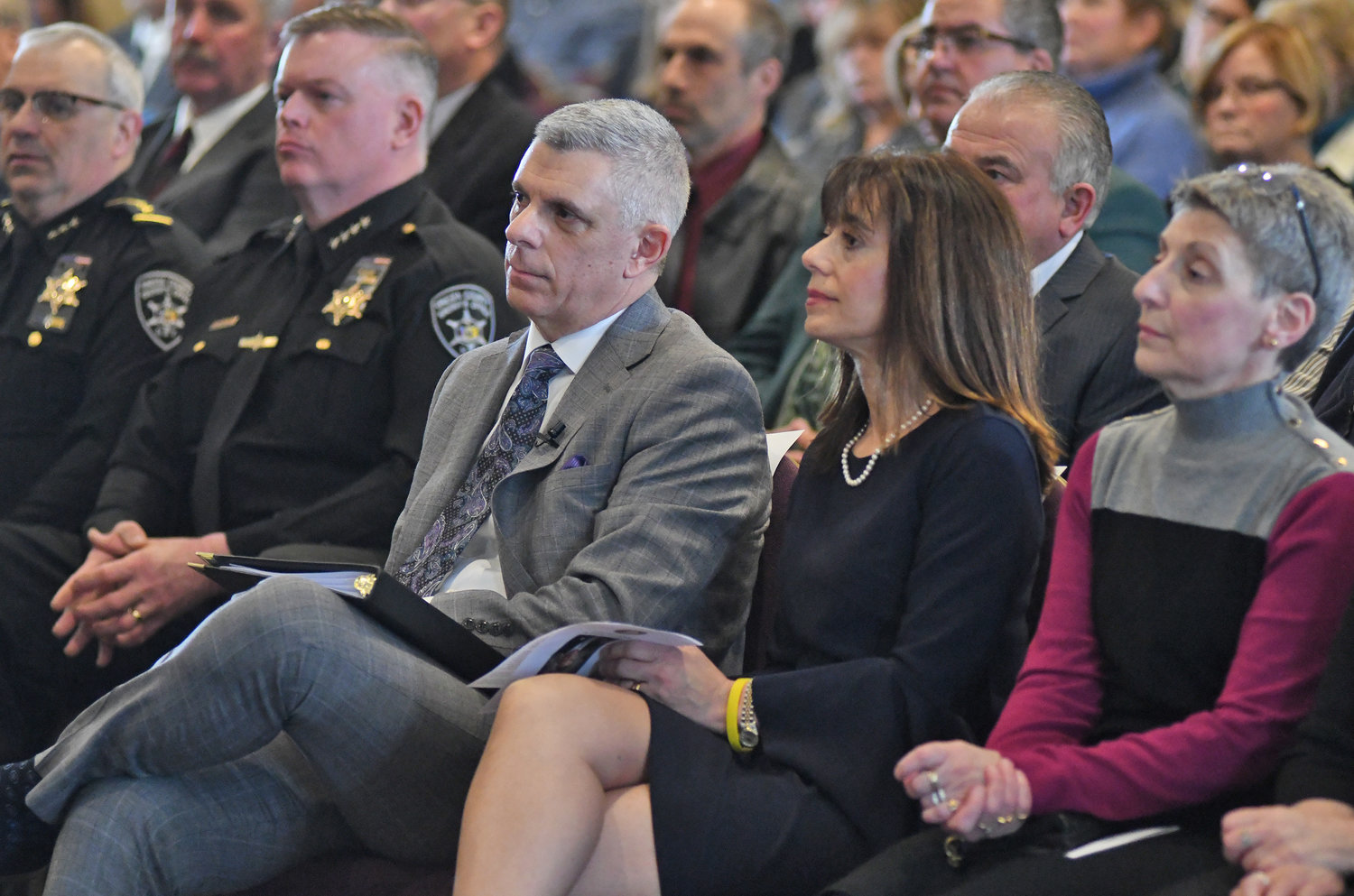 County executive Anthony Picente during his state of the county speech Tuesday afternoon. His wife Eleanor is to his left one of of his sisters.
(Sentinel photo by John Clifford) 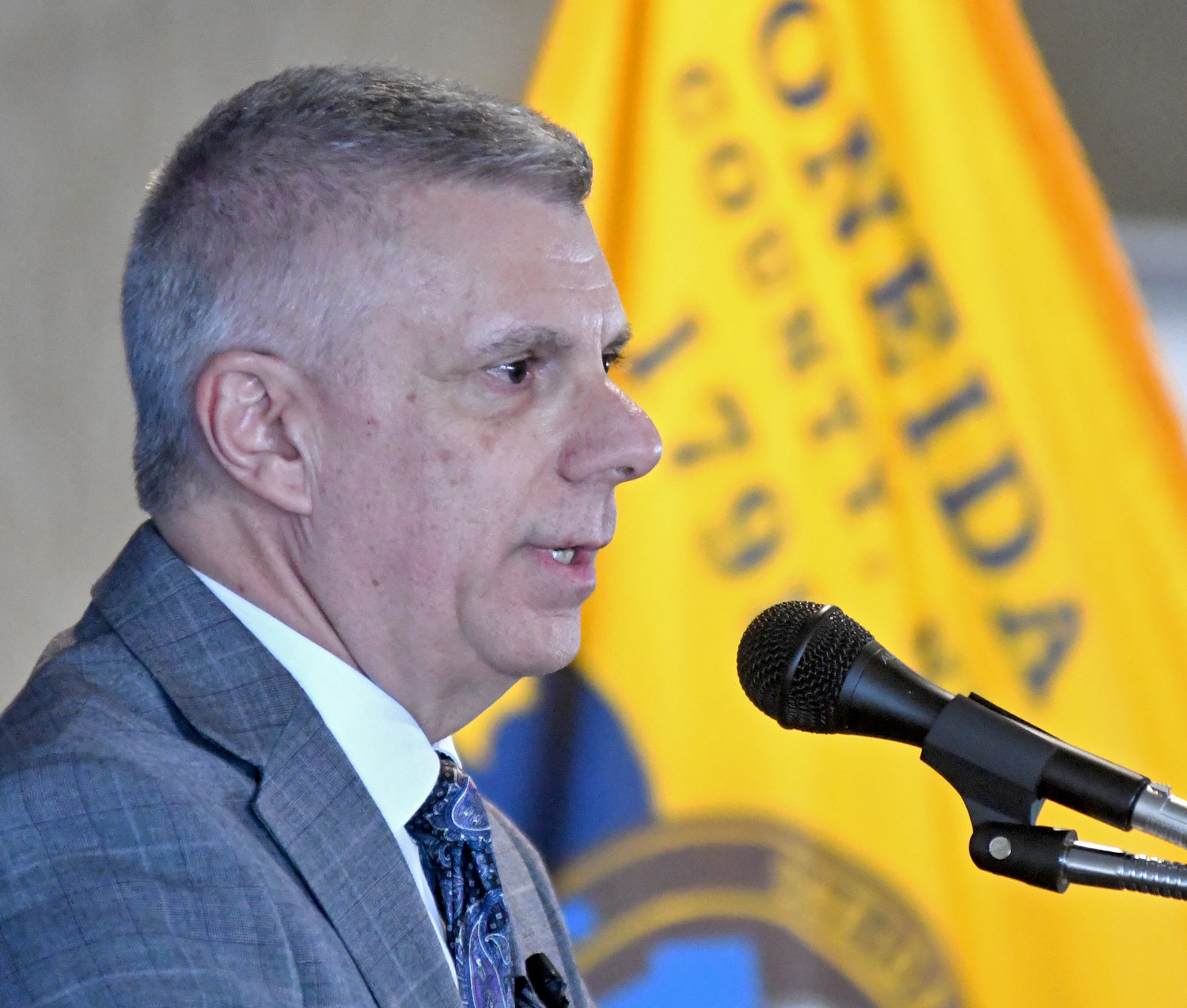 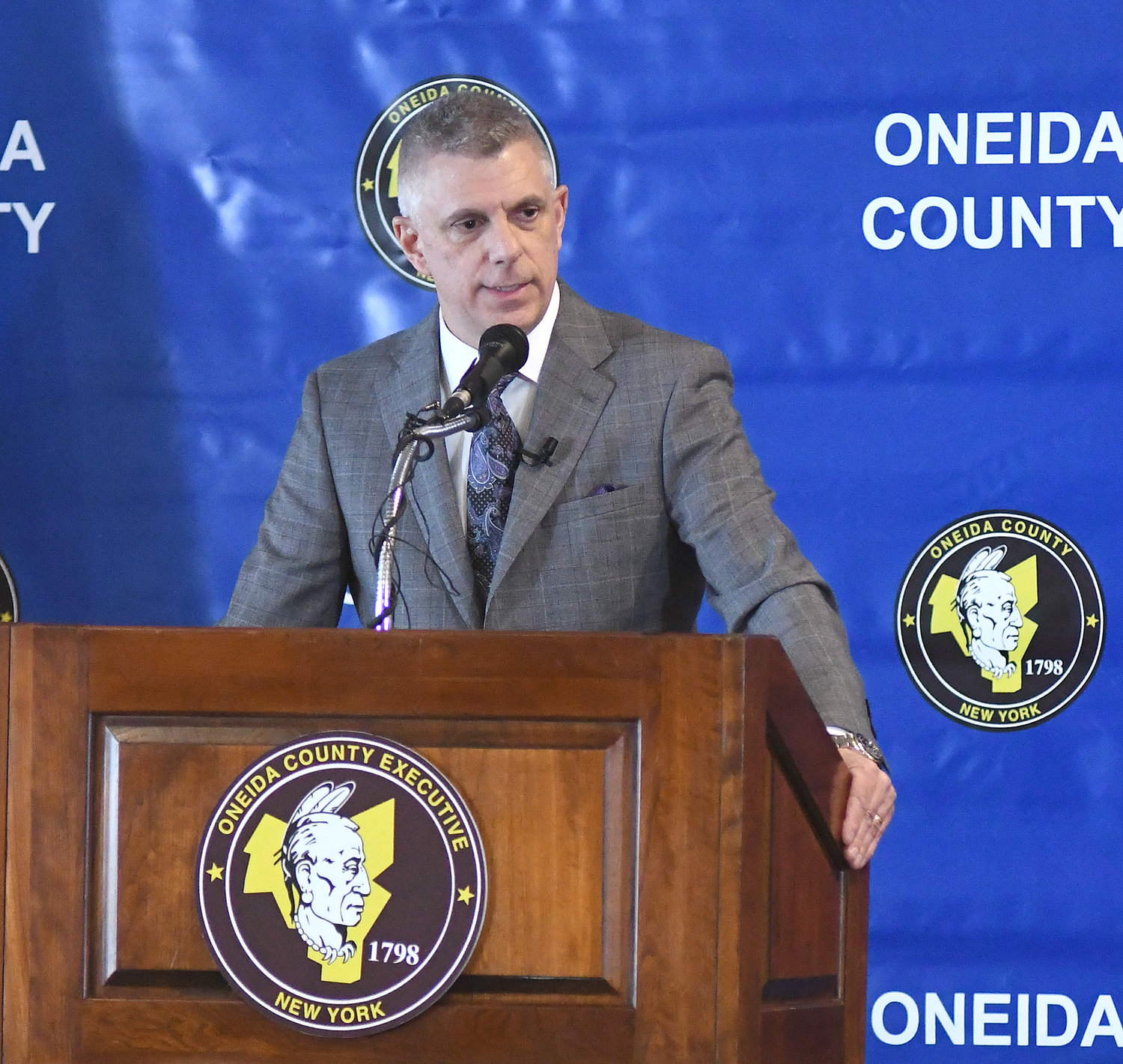 Picente announced the initiative, in the form of a request to the Board of Legislators to revise the county charter, at his annual state of the county address Tuesday afternoon.

He said preliminary discussion has started to consolidate the Department of Social Services, Office for Aging and Continuing Care, Veterans Department and the Youth Bureau into one cohesive department.

The new department will be launched with an initiative to identify homeless veterans and deliver the help they need.

“By 2022, we will eradicate veteran homelessness in Oneida County. It can be done. We will do it. We owe them that,” Picente said.

Picente gave the annual address at the main ballroom at Danielle’s Banquet Specialists in New Hartford, packed with fellow elected county officials, county employees, many members of the Board of Legislators and other politicians, including Rome Mayor Jacqueline M. Izzo, Utica Mayor Robert Palmieri and former Democratic Congressman Michael Arcuri.

In his nearly hour-long address, Picente emphasized other social issues. Human services account for nearly 45 percent of the county’s $419 million 2019 budget. One issue was addiction. He cited progress in reducing driving while intoxicated cases and fatalities and said similar progress can be made against other addictive substances.

“Today, we redouble our efforts to fight opiate addiction. We will partner with non-profit organizations, law enforcement and medical professionals to launch a concerted, coordinated, publicly-funded education campaign aimed at reducing opiate abuse in our community.”

Picente said an advertising and social media campaign brought in 100 people to take the civil service exam to fill 35 social-services caseworker vacancies. Meanwhile, the county has reorganized the Department of Social Services and created a homeless unit.

He recounted the story of the family who led the Pledge of Allegiance at Tuesday’s ceremony, that of Edin Patkovic, a Bosnia native naturalized Feb. 7, and his wife Mahira, also from Bosnia.

Mahira came home from third grade in tears and told her mother everyone at school spoke only English, Picente recounted.

Now she has a bachelor’s degree and she and Edin now have a downtown-Utica business of their own. Picente used the story to plug county efforts to improve English lessons for non-native speakers.

Another theme was economic development. Picente linked Amazon’s pullout of its New York City second headquarters to a consolidated downtown-Utica hospital, for which the county is contributing much of the expense of a new parking garage.

A small yet vocal crowd using fear and false information to derail a $600 million investment in that city, Picente said.

“We are long past an alternate site. If this project does not move forward now, there will be no new hospital and the health and well-being of this community will be placed in comfort care.”

Picente cited reduced sales tax and the settlement with the Oneida Indian Nation, which he credited for six years without an increase in the county tax levy, and five-year budgeting and a workforce he said is the most efficient since the 1970s. “My administration has spent over $65 million on our roads and bridges.”

Picente announced a second phase of the Oneida County Public Market in downtown Utica’s Union Station’s railroad agency building to the east of the main atrium and  8,400-square foot second floor with a request for proposals for what to do with it.

Picente took credit for a consolidated 911 system and says the ability to send photos and videos will soon happen.

“A separate system run by individual cities and towns could never make these types of investments.”

Picente also followed-up with an initiative announced a year earlier, a plan to help dairy farmers. An agriculture-tourism marketing plan has been developed along with a package of land-use rules to facility farming growth being shared with towns. A new Ag Advisory Board convenes March 27, Picente said.

He also touted investments at the county-owned former Air Force base in Rome now known as Griffiss International Airport, citing privatizing fixed-base aviation operations that have had record fuel sales, along with a new terminal, customs and office building, and the airport’s role in drone development, as the anchor of a federally designated corridor for unmanned-aircraft testing and verification.

Picente said the county will work with BOCES, Workforce Solutions, trade unions and a contractors’ association to create a plan on career and technical education and job awareness.

“We need contractors, plumbers, carpenters and so much more. Together we can fill these needs.”

He also said a group of business and venture-capital leaders met with the Innovation Coalition of Coeur d’Alene, Idaho, which is credited with drawing tech companies to the small Rocky Mountains city to get ideas on fostering an innovation-oriented local economy. The goal is to encourage economic development from within rather than relying on luring employers from outside.

“Our community can lead a regionwide transformation and begin a new chapter that garners the attention of the rest of the world... The MVCC Foundation will be the contracting agency and I have directed my government to work with them and the IC Team to help foster this change. We will grow our burgeoning innovation-based economy.”

Another issue in 2019 is coping with the probable legalization of recreational marijuana. Picente said he opposes legalization but believes it is inevitable and the county should thoroughly discuss ramifications fiscally and otherwise.

He said he plans a series of town-hall meetings this spring and summer.

“Once again upstate New York will have to contend with New York City values being imposed on us from Albany,” Picente said.

“It would be irresponsible for us to ignore the reality and how that decision will affect our future.

“I want to hear from farmers, health care providers, law enforcement, medical marijuana patients, advocates for recreational use and others, to formulate a deeper understanding of all the issues, costs and benefits… I believe we should be ready for those consequences and move forward with a plan the community believes in with the appropriate safeguards.

Picente, a Rome resident and Utica native, is seeking re-election this year and has been endorsed by the county’s Republican Committee.

He was appointed to fill a vacancy in 2006 and was elected to four-year terms in 2007, 2011 and in 2015, when he faced no opposition. Former county legislator David Gordon has announced he is seeking the Republican nomination for the office by seeking enough petition signatures to force a Republican primary.