Picente outlines host of initiatives in state of the county address 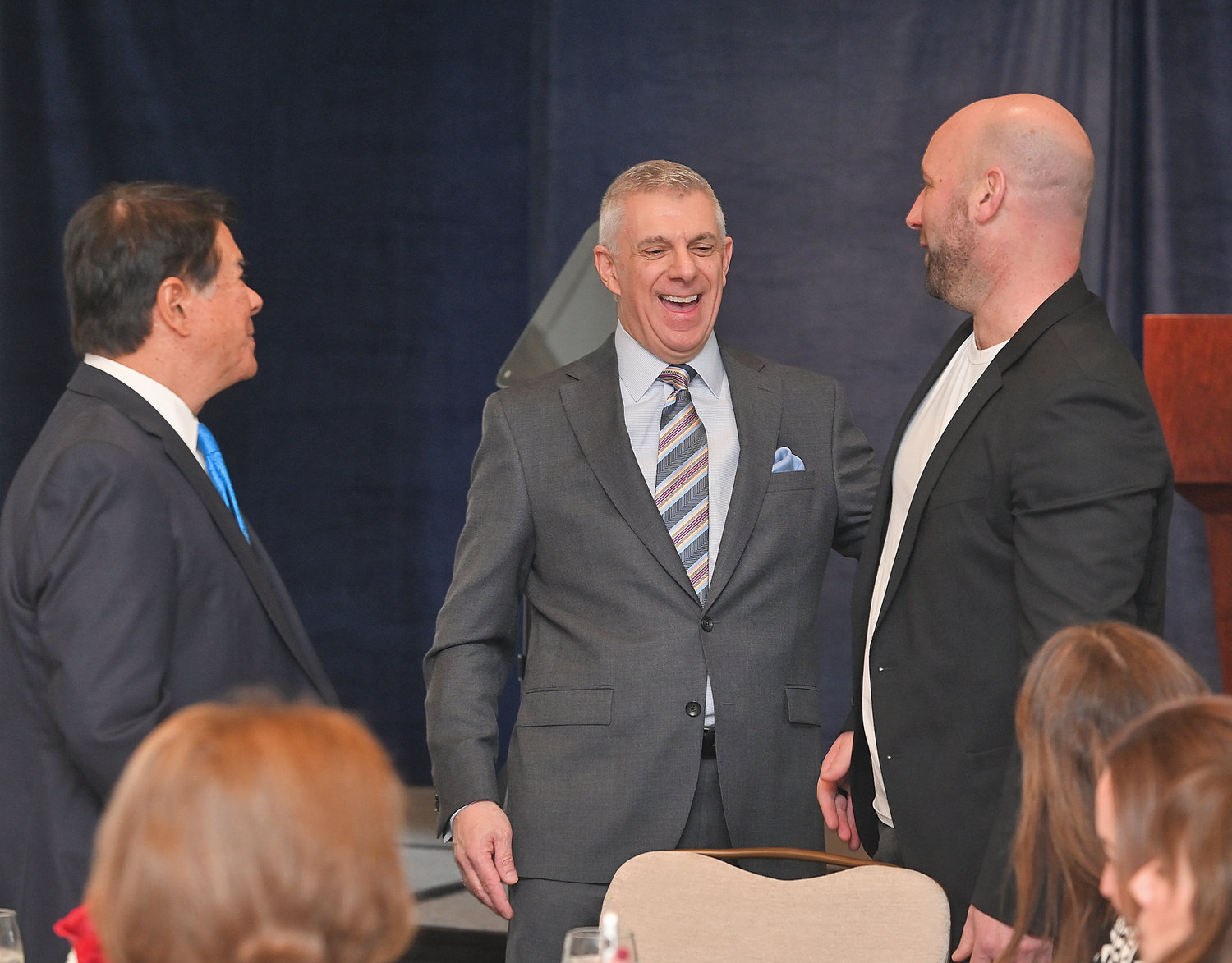 PARTNERS IN PROGRESS — Oneida County Executive Anthony J. Picente Jr. speaks with Oneida Indian Nation Representative Ray Halbritter and the president of the Utica Comets and Mohawk Valley Garden Robert Esche before the start of Picente’s State of the County address at the Turning Stone Resort & Casino on Wednesday. Halbritter and Esche, along with Munson-Williams-Proctor Arts Institute President and CEO Anna D’Ambrosio; and Savneet Singh, president and CEO of PAR Technology, will spearhead the county’s redevelopment district project in Utica.
(Sentinel photo by John Clifford) 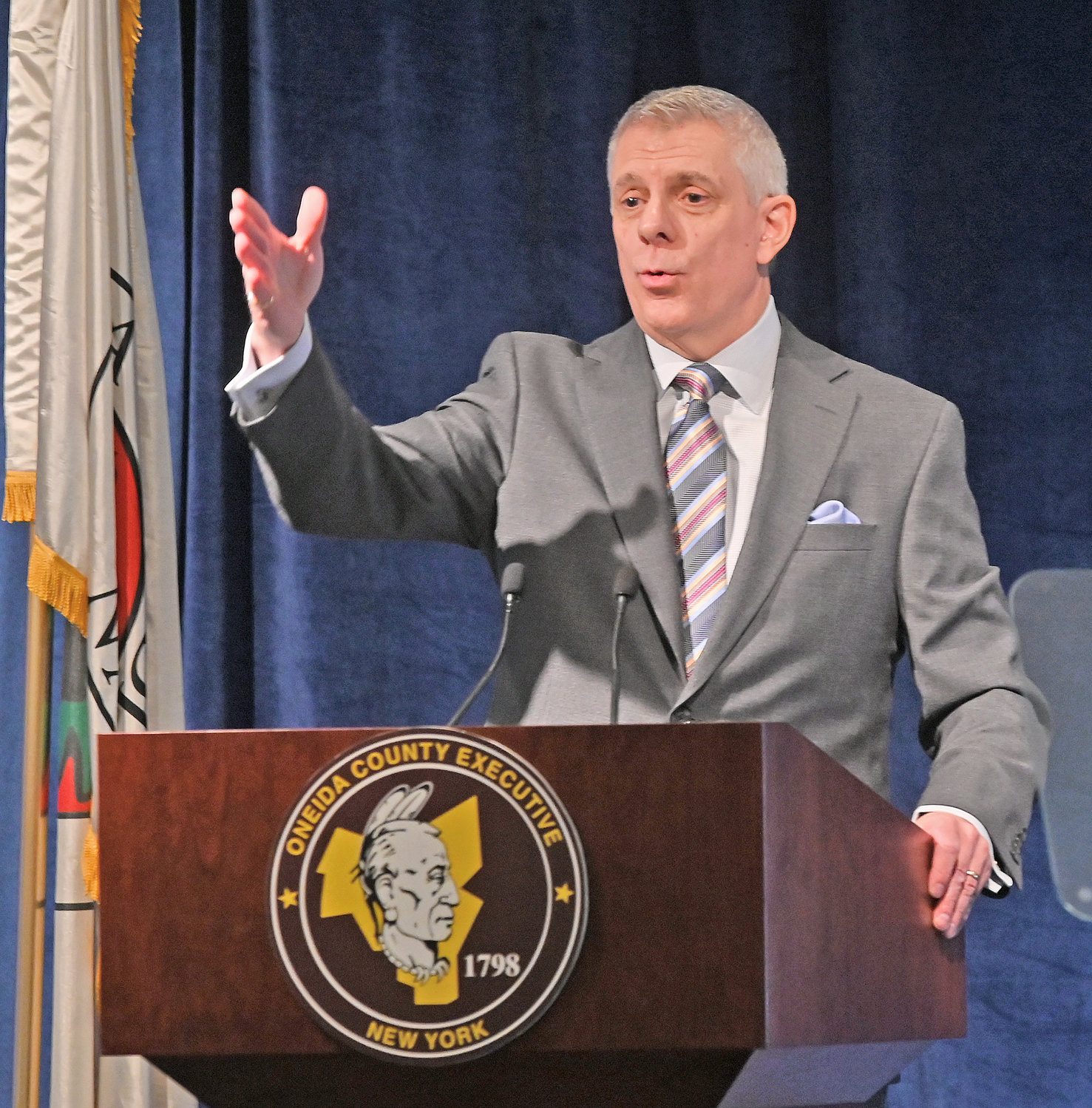 From there, the county executive laid out his thoughts on economic development achievements during the coronavirus pandemic (the reason for the hiatus in in-person addresses) and his vision pushing through the next few years with both ongoing and upcoming multi-million projects in Utica and Rome.

• “We not only stayed open, we pushed our generational projects forward. With the Nexus Center (now under construction in Utica) we overcame obstacles to remain on track and we look forward to its completion this year. (In Rome) the Innovare Advancement Center was completed and is now thriving, and soon Skydome will be as well, cementing our place as a leader in unmanned aerial vehicle research, artificial intelligence and quantum computing in the entire country,” Picente said, “and finally, what was once the dream of nanotechnology here in Oneida County is now a reality with the official opening of Wolfspeed (in Marcy) in just a few short weeks.”

• Mohawk Valley Health System’s Wynn Hospital in Utica will be completed next year, and with it, a new parking garage, the county executive said, adding, “These projects are transforming Oneida County — our economy, our healthcare system and our future. It is imperative our work, in conjunction with our partners, continue on these projects.”

“This center will enhance the hospital’s ability to manage complex and high-risk pregnancies. This investment of federal recovery funds will help that project elevate to new heights,” he said.

“We are proud to be one of only two “Best Maternity Hospitals” in the state. The funding for a dedicated c-section suite will enable Rome Health to take the next step in advancing our bold plan for the future,” said Rome Health President and Chief Executive Officer AnneMarie Czyz, EdD., RN, NEA-BC, in a separate statement, “While navigating the pandemic, we broke ground on our new Physician Center, became a nationally accredited bariatric center and invested in revolutionary 7D technology for spine surgery.”

The hospital plans to renovate 2,000-square-foot of existing space and convert it to a modern surgical suite adjacent to the Maternity Department for enhanced patient safety and to optimize the hospital’s existing operating suites on the first floor.

“Although the hospital’s c-section rate is better than the state average, the hospital’s overall obstetrics volume grew 28.5% between 2020 and 2021 with reduced access to care in neighboring communities and the hospital’s designation as one of only two ‘Best Maternity Hospitals’ in the state,” notes a hospital statement.

In a reaction to this news, Rome Mayor Jacqueline Izzo said she was thrilled the county was supporting Rome Health — and the Rome community — in such a way.

She also pointed to Picente’s remarks of building a new YMCA location at Rome’s Woodhaven site saying, “It’s more a testament that the community is solidly behind this. … It will allow the Y to modernize and grow,” among other Rome developments.

“Over the past few years in Rome, we have experienced significant investment in new housing stock at Woodhaven and Air City Lofts to meet the demands of growing opportunities at the Griffiss Business & Technology Park. To serve this growing community we are committed financially to the creation of a new YMCA in Woodhaven near Griffiss. Oneida County is proud to be a partner and today I’m announcing a commitment of $2 million to the project,” Picente had said, “To see the progress in Rome with Air City Lofts, the Innovare Advancement Center, Skydome, the new MVCC Campus and other new housing developments has been exciting and the county is proud to spearhead those important investments while working side-by-side with Mayor (Jacqueline) Izzo.”

In a forward look, Picente said that tourism would be key in the revitalization of Utica, primarily with the ongoing development of an area dubbed the “U-District” surrounding the Adirondack Bank Center (The AUD).

The sports and entertainment-focused “U-District” concept was launched about five years ago.

“The movement on the … Nexus (Center) has inspired me to look at the U-District differently. Obviously we have seen great success with the Adirondack Bank Center and we know it will only get better. But really, it encompasses all of Bagg’s Square and we need to think of it in those terms. Today, I’m proposing a U-District Redevelopment Corporation to streamline, direct and facilitate public and private investment into this area. This district, focused on sports, arts, entertainment and tech, will be bookended by two signature investments. The redevelopment of the county-owned Insight House property on one end, and the creation of the REA Wing Food Emporium on the other,” Picente added.

However, “...to truly realize the potential of the U-District, we need to move the rest of the area forward. The county will, through this district, spur public and private investment. I see the potential in this area of Utica. We have to make the vital connections between these signature county-owned assets and the rest of the neighborhood,” Picente said.

He continued, “One of the first projects we will address is the safety, lighting, parking and landscaping issues around the Nexus Center. This gleaming new one-of-a-kind facility, which is already booked through March of 2023, is currently fronted by an urban hell-scape. Partly the result of neglect, the area as currently situated, would be a disaster for visitors. This is unacceptable. We will continue the county’s investment and commitment to Nexus and the district by providing these vital amenities and safety measures.”

In a post speech reaction, Mohawk Valley Garden President Robert Esche said he was happy to hear Picente’s commitment to further developing the U-District. “It shows excitement for the area. … It’s amazing for him to double down like that.”

Utica City Mayor Robert Palmieri was unable to attend the address, but would be reviewing the county’s address, according to a city spokesman. Comment from the mayor was not available at the time of this report.

This was the first time the county address had been delivered on the Oneida Nation homeland, according to Oneida Indian Nation representative Ray Halbritter, who added that it was a testament to partnership and recognizing the county’s ongoing revitalization efforts, which is a team effort.

Referencing a Native American saying, Halbritter said, “One finger cannot lift many petals, an entire hand is needed to do that.

In Picente’s remarks, he seemingly answered in sentiment sacred to the Oneida people, “this partnership not only strengthens this region unto the seventh generation, it will last seven generations and beyond because we know we are stronger together.”

See the full text of the address  here: https://romesentinel.com/stories/state-of-oneida-county-address-april-6-2022,132341?