Physicality ramps up for Comets-Amerks 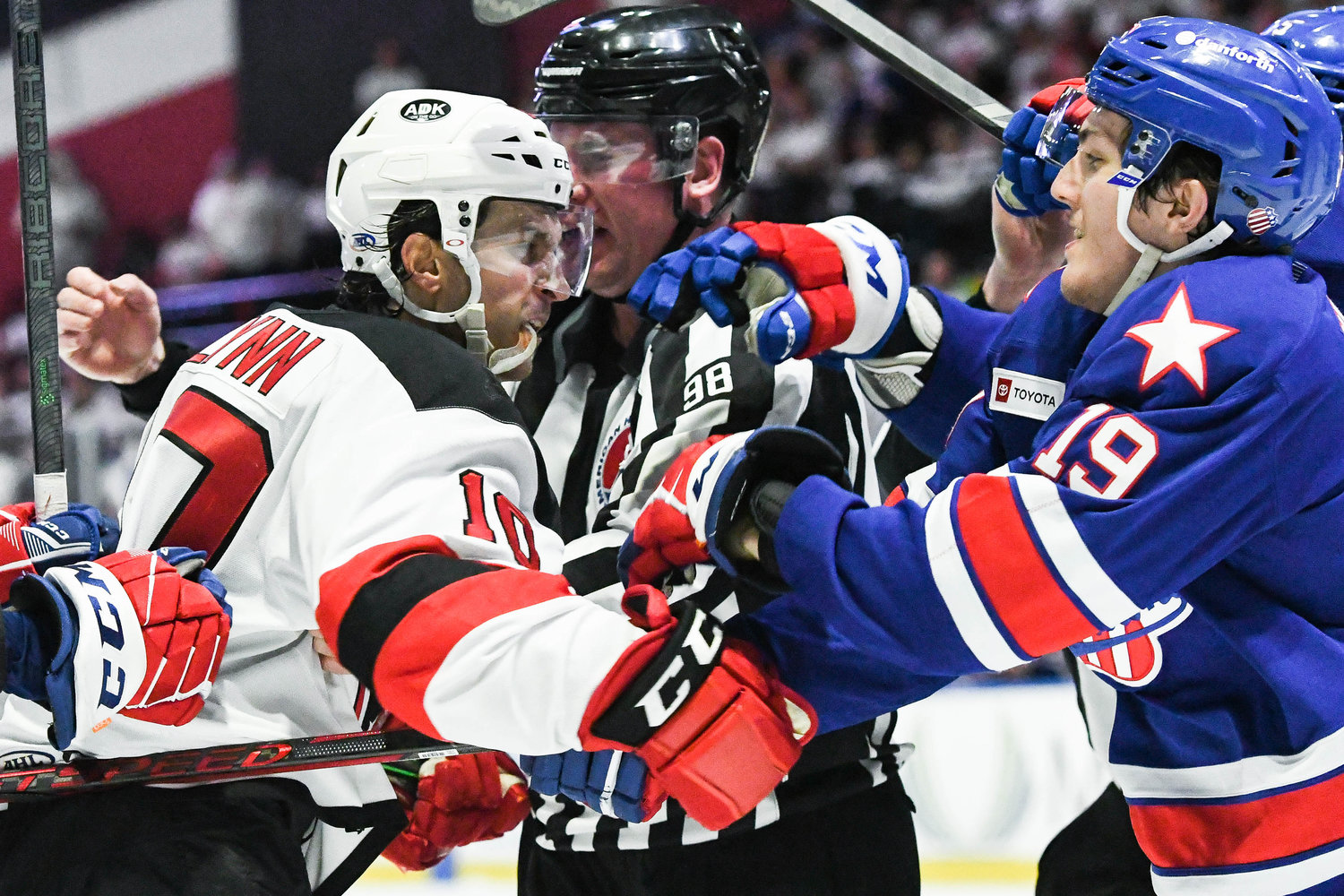 That’s amplified when two American Hockey League teams meet 12 times in the regular-season like the Utica Comets and the Rochester Americans.

Mix in a best-of-five games playoff series — Game 2 is 7 p.m. Saturday in Utica — and meetings are going to have their share of kerfuffles on the ice.

“After playing a team 12 times, you pick up on their tendencies and what they’re capable of,” said Comets forward Joe Gambardella, who scored the go-ahead goal in the third period in Game 1. “Emotions are going to run high.”

Take the end of Game 1 on Tuesday after Utica closed out a 6-3 win. After the final horn sounded, a scrum broke out near the Rochester bench. A few players from each team scuffled for about two minutes after the horn.

Comets broadcaster Jason Shaya pointed out on the radio broadcast that Rochester’s Brett Murray grabbed the game puck — it usually goes to the winning team — and didn’t seem to want to part with it.

Comets coach Kevin Dineen walked on the ice in an effort to get his players to back away.

The announced sold-out crowd clearly loved it as Utica eventually celebrated the win.

There was no discipline from the short disturbance. The teams did combine for 50 penalty minutes in the game. Included were 10-minute misconducts given to Comets’ Kevin Bahl and Samuel Laberge and Rochester’s Peter Tischke stemming from a separate incident late in the third.

“This will definitely be a physical, fast series,” Gambardella said.

The teams combined for more than 30 penalty minutes in six of the 12 meetings this season.

“These two teams don’t like each other,” Rochester coach Seth Appert told media before Game 1. “I’d say eight of the 12 games were pretty nasty, very physical, fights, a lot of animosity. It’s two teams that both try to play honest. Both play fast, attacking styles. Both are physical. Then you play 12 (games) and you’ll have that.”

Does Dineen expect the physical play to continue?

“I don’t worry about that stuff,” he said after Game 1. “You play the game. At the end of it, emotions are also high in the playoffs. You move forward and look for wins.”

“Everybody says how good their fans are. I mean, you see people that talk about their incredible fan base. I don’t think we even talked about it. I mean, I’m sitting in the locker room before the game and there’s this palpable kind of buzz in the air that you can hear from the locker room,” Dineen said on Game 1 atmosphere.

“It doesn’t get much better than that, honestly ... To see the whiteout was an unbelievable electric feeling,” Gambardella

As the affiliation changed from Vancouver to New Jersey, the Comets said with the “guidance and experience of Damion, the transition was a seamless process. Underneath the calm demeanor was the constant hard work, diligence and experience of someone who has been around the game for a long time. Work ethic is personified by Damion who is always the first person at the arena and the very last one to leave. It doesn’t matter if it’s during the middle of the summer or if it’s in the middle of the season, (he) is there to take care of things so his players, coaches and the front office staff can rest easy that knowing work is being done to facilitate the team’s needs. There is no member of the organization with more institutional knowledge than Damion.”

His wife, Ashley, and two young sons, Wyatt, and Truitt, are staples at games.

The honor is usually given to a player “for his outstanding contributions to his local community, this season the league expanded the Person of the Year program to allow teams to recognize individuals who played an important and perhaps unexpected role in supporting their organization and/or impacting the local community as the AHL again navigated through a season impacted by COVID-19.”

What: Game 2 of the best-of-five North Division semifinals.

Fun: The team said weather permitting there will be a plaza party starting at 4:30 p.m. Saturday outside of the arena.

There will be live entertainment, food and beverages and activities for kids, according to the team. There will be a pre-game show from 5:30-6:30 p.m. at 72 Tavern.