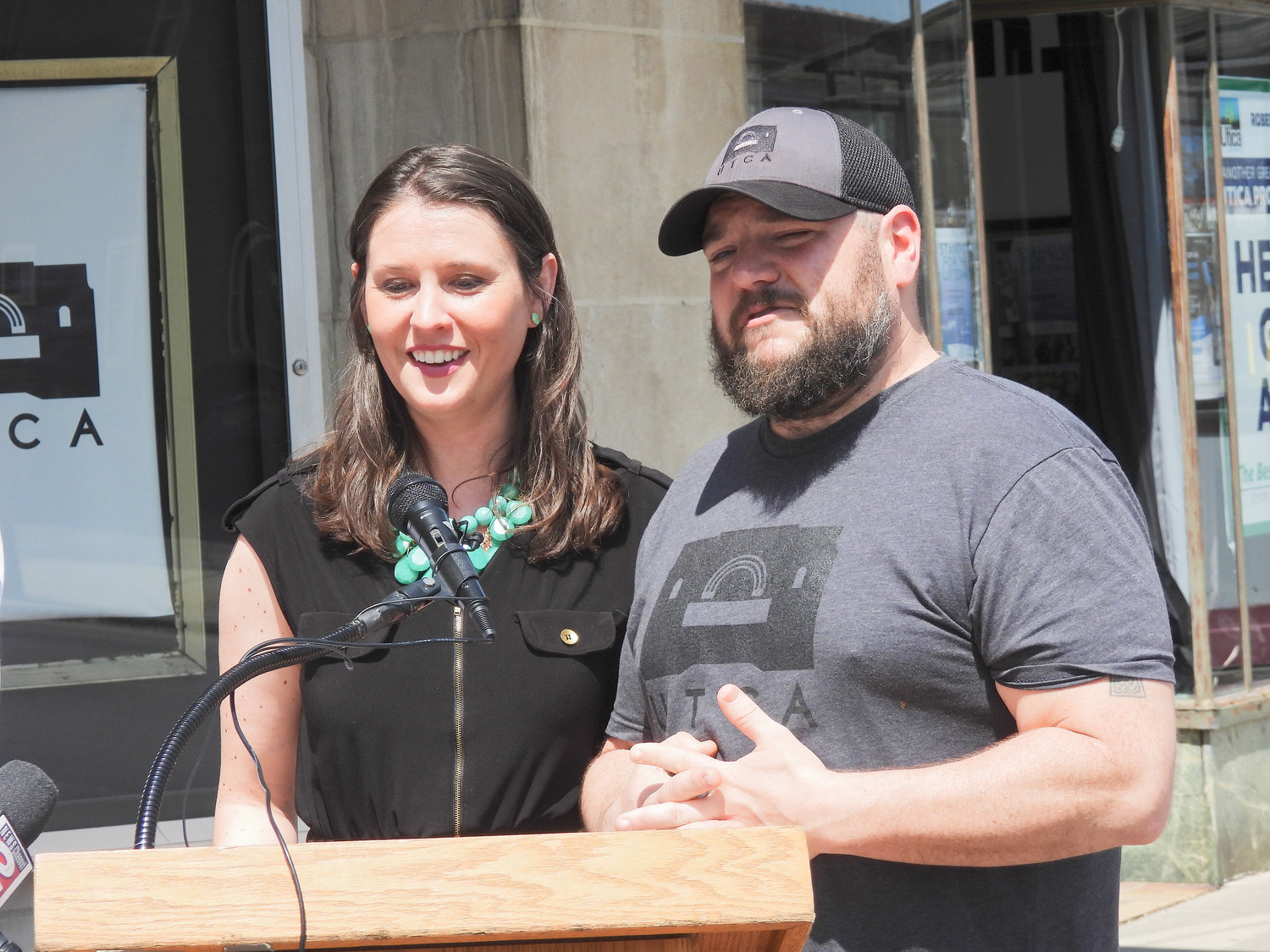 Briana and Devin Mahoney speak at a press conference on Thursday, thanking the city for the investment and those who have participated in fundraising efforts to repair the Uptown Theatre for Creative Arts's roof.
(Sentinel Photo by Charles Pritchard) 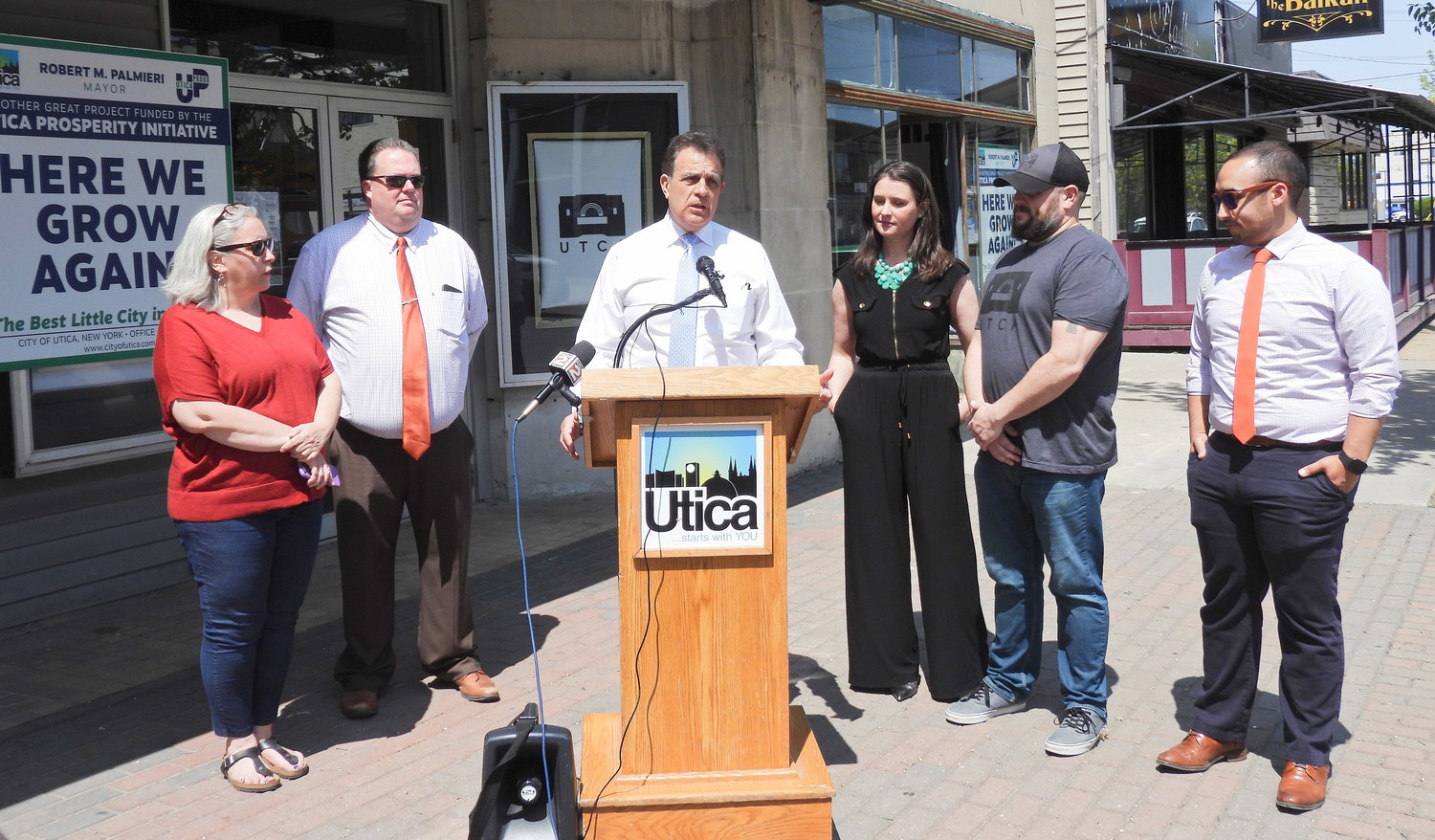 Utica Mayor Robert Palmieri speaks with local officials and the owners of the Uptown Theatre for Creative Arts, where a roof repair is one of many upcoming projects in the city.
(Sentinel photo by Charles Pritchard) 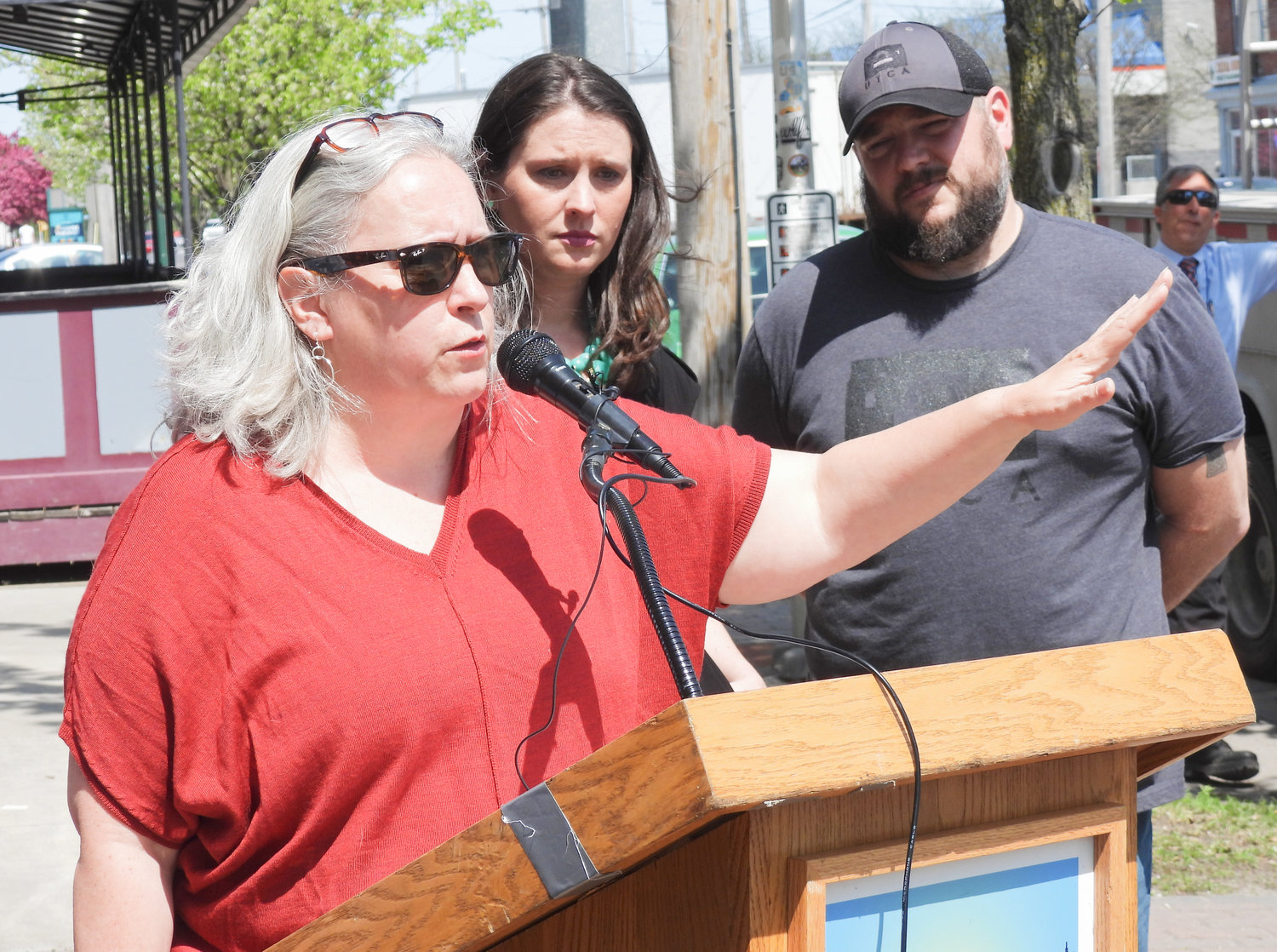 3rd District Councilor Celeste Friend speaks at press conference on Thursday, extolling the potential of the Uptown Theatre for Creative Arts to be an anchor of the community and way forwards for positive change.
(Sentinel Photo by Charles Pritchard)
Previous Next
Posted Friday, May 13, 2022 7:30 am

The Utica Prosperity Initiative was crafted after the city solicited public input to determine the community’s top priorities, projects and programs. As a result, dozens of quality of life projects and programs have been allocated funding — although specific dollar amounts were not released for most of the projects.

The repair of the Uptown Theatre roof is included in the lost of projects, with a cost of around $500,000. The roof work is scheduled to commence in the next 45-60 days.

“It’s an honor to be here in front of a landmark building in south Utica,” Palmieri said. “I can reminiscence how often I came here with my family and after school. And we’re very fortunate we have have two entrepreneurs who came back to their roots in Utica, investing their time, heart, and soul in bringing back the Uptown Theatre.”

Palmieri extolled not just Briana and Devin Mahoney for their work, but 3rd District Councilor Celeste Friend for her advocacy for the Theatre and its mission.

“What’s lovely about South Utica is its walkability and access to the entertainment district from the residential district,” Friend said, listing off all the restaurants and businesses in the area just in one small area. “We’ll be using part American Rescue Plan Act funds to make the ‘Uptown District’ here in South Utica. It will take advantage of Utica’s greatest strengths: walkability and local independent businesses. We’re going to build on these strengths and create a wonderful district in this area and the Uptown Theatre is going to be the heart of that district.”

Briana said it was a shock to receive funding from the Utica Prosperity Initiative, but she and Devin are grateful. She added Uptown Theatre is close to its fundraising goal, which will allow them to reopen the auditorium.

“Receiving funding from the Utica Prosperity Initiative was a real turning point for our project and our fundraising efforts,” Devin said. “Replacing the roof is the top priority to secure the building before focusing on the rest of the restoration. We’re so grateful to Mayor Palmieri for the decision to invest in the Uptown.”

In addition, several other projects have already started or will be starting imminently. To highlight the projects funded through the Utica Prosperity Initiative, the city is unveiling signage at various sites throughout the city. In addition to the Uptown Theatre, the first unveiling of signage will be at the following locations:

Utica Zoo (for the construction of its Welcome Center)

“The Utica Prosperity Initiative is providing our community a unique opportunity to enhance the quality of life for our residents. Through strategic investment, we are promoting Utica’s existing assets; with a mission to make our community an attraction and a destination.” Palmieri said. “More announcements and signage will be forthcoming as these projects undergo implementation.”

In the subsequent weeks and months more announcements will be made and signage will be unveiled as Utica Prosperity Initiative projects commence and progress.