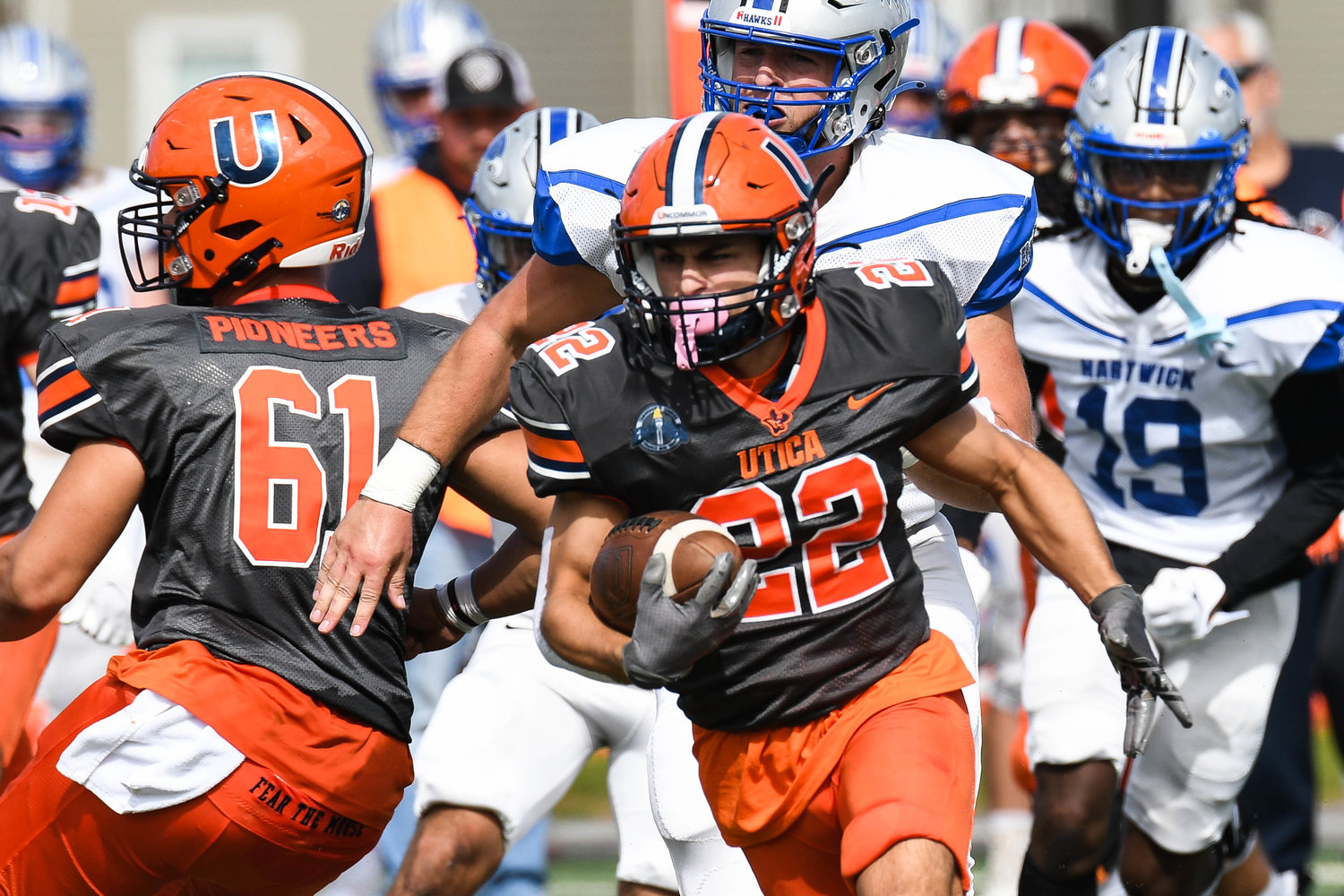 The team has rolled to a 10-1 record – the first time the program has reached double-digits – and earned Utica’s first NCAA Division III playoff win and valuable experience.

“(The first round of the playoffs) was about getting the jitters out. We know we belong here. We know we’re able to play with these teams in the playoffs,” said Nate Palmer, the two-year Utica captain and Vernon-Verona-Sherrill standout. “Now it is time to just settle in and do what we know we can do.”

Palmer has shown a versatility while being a key component in finding chemistry with quarterback Braeden Zenelovic in the Pioneers’ success that has allowed them to play this deep into November.

It has helped provide another first for Utica while also surprising some: A second-round playoff matchup. Utica is pitted against perennial power Mount Union at noon Saturday in Alliance, Ohio.

Palmer, a Utica grad student, is among 15 semifinalists for the Gagliardi Trophy, which is awarded to Division III college football’s most outstanding player. He is the first player from the Utica program to be among the Gagliardi semifinalists.

Voting for the honor is done through a 40-person selection committee, though there is a fan voting component as the 41st vote. Fans can vote once per device on d3football.com. Finalists will be announced on Wednesday, Dec. 7.

“It is definitely an honor,” said Palmer, who is also the team’s holder on extra points and sometimes lines up in the backfield while also playing different receiver roles. “If I’m being honest, it is what it is. I’m just looking to help the team be 1-0 this week.”

Utica coach Blaise Faggiano said his team is getting contributions throughout the lineup.

“You talk about a group of guys that are really committed to 1-0, they just want to watch the film. The more they watch the film, the more excited they are,” Faggiano said.

Palmer said the Pioneers – who have more than 30 seniors and five players who used their extra year of eligibility have built great chemistry. It is accumulated since Utica grabbed a postseason bowl win over Ithaca in 2018, which was was Palmer’s freshman season.

“I knew I wanted to carry on the tradition after (players from that team) left,” said Palmer, who noted spring football earlier this year also played a role in helping the team develop chemistry. “We’ve always wanted to eat Thanksgiving dinner at Utica. This year, we (did) that.”

And, while there’s been more well-wishes – that’ll happen when you’re playing close to home – Palmer said the most important thing is “getting a win at the end of the season.”

The next test for Utica could be a tough one. Mount Union has a long history of success in the Division III playoffs. The program is 109-19 in 33 playoff appearances and has won 13 Division III national titles. The school’s most recent title was in 2017.

This season, Mount Union is ranked No. 2 in the most recent d3football.com poll and are 11-0 after cruising Salisbury 51-0 in their playoff opener.

The offense features its own QB-receiver combination. Senior Braxton Plunk is second in Division III in passing yards (3,440) and passing touchdowns (41) while ranking third with a 73.6 completion percentage. Wayne Ruby Jr. is the lone receiver in the nation with more touchdowns than Palmer this season, totaling 14. Deandre Parker also has 1,009 yards rushing.

“(The ‘Be 1-0’ mantra) has stuck since the beginning of the season when coach Faggiano said we’re not going to build any game up,” Palmer said.