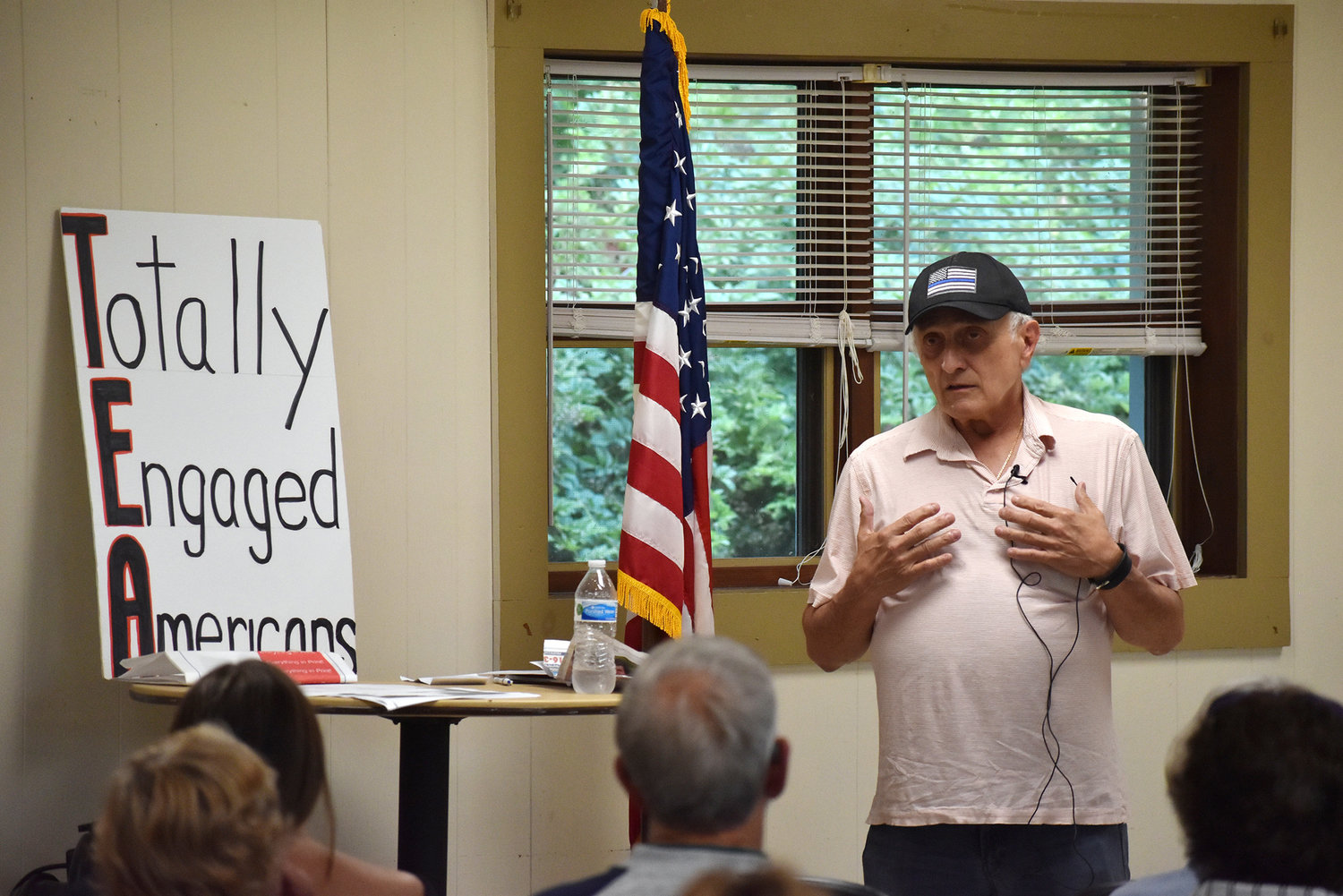 Instead, the real estate developer and businessman on Tuesday largely focused on what he said are the failings of President Joe Biden. “Joe Biden is an idiot,” the often outspoken Paladino told members of the Southern Tier Tea Party Patriots at the Allen Park Men’s Club near Jamestown.

Paladino is among a handful of candidates in the Republican primary race, though he and Nicholas Langworthy, chairman of the New York Republican Party, have the most name recognition in Western New York.

In a 45-minute discussion Tuesday, Paladino spent time criticizing the president and New York Gov. Kathy Hochul. “Somehow this man, by some Osmosis, made it up to be the president of the United States,” he said. “And Kathy Hochul, by another Osmosis, got to be the governor of the state of New York. As bad as Andrew Cuomo was, all right, this woman is totally off the rails.”

Should he be elected to Congress in the recently redrawn, and still heavily Republican, district, Paladino said he would focus on Biden early on.

“Impeach the president,” he told The Post-Journal of his top priority if he were to win in November. “I’m going to bring a resolution to impeach the president. ... People will respect me then for what I am. Should he be impeached? Why doesn’t anybody say it? But it’s very obvious this guy is totally incompetent. He has not a clue what he’s doing.”

“I mean, yes, who’s going to follow him up in office? The crazy woman, OK?” he said of Vice President Kamala Harris. “So then we’ll deal with her.”

Paladino touched on other topics as well Tuesday during his talk with the local Tea Party organization. Among them:

• Gun control. Paladino said efforts should be focused on mental health assistance, not limiting guns, in the aftermath of mass shootings in Buffalo and Texas.

“They want to blame the guns, not the mental disease behind the gun,” he said. “The gun is just the vehicle, it’s an apparatus, it’s something that is used. It could be a knife, it could be dynamite, it could be who knows? They want us to believe that those guns are dangerous. This is our society today, totally misled by the press, by the liberals.”

• Representation. Paladino noted the “hard work” done by Chautauqua County’s two state representatives, state Assemblyman Andrew Goodell and state Sen. George Borrello. However, he showed little love to other members of the state Legislature and those voting them into office.

“Those people in New York City send a bunch of dogs to our state Legislature, and they pass these stupid laws because they feel sorry for these people,” he said. “So we got a system that doesn’t have consequences. Good parents taught you when you were young that there are consequences for your actions. How many people today are teaching their children there are consequences for their actions? It’s a shame. The realities are that the world has changed, not for the better but for the worse. And we have to do something about it.”

• Climate change. He criticized efforts to put windmills in Lake Erie and noted the surge of solar projects cropping up across New York.

“I believe that every young man, at the age of 18 or graduation from high school, should serve a minimum of one year, if not two, in the service of their country,” he said. “For what reason? So that they can learn the discipline. ... So that they can value their citizenship and value their country, OK, like we do. Serve your country and you will value it for the rest of your life. Unfortunately, we’ve let a couple generations get away.”

His backing of compulsory enlistment is just for men, though.

“I’m talking about males, not females,” he followed up. “I don’t believe females, you know I don’t believe in all this, ‘We’re all one and one for all’ and all that nonsense. You have a special place. We can’t give birth to a child, you can. You’re a major part of the growth of our society in the future.”

• Former U.S. Rep. Tom Reed. “I’m going to be a much different representative for the people in Washington, D.C., than they’ve had in the past,” he said. “Tom (Reed) really was more of a, ‘Go on, get along’ type guy, and I’m not.”

Asked what he felt were the biggest challenges facing Chautauqua County, Paladino alluded to its rural nature and hardships facing many farmers; trade policies under Biden that he say have further fueled inflation problems; and poor representation in the legislature.

“You have all the problems of the burden of taxes, the same things that everybody else has, you know,” he said. “Poor political representation, although I have to say that Goodell is a good man. I know how hard he works and how hard he tries. With him as an exception, and Borrello, I know how hard he works and I’ve witnessed it. With those exceptions we have poor leadership. We’re not electing the right people to go up into office — people that are responsible and accountable for the many issues.”