ONEIDA — She was the last woman hanged in Great Britain after being convicted of shooting her lover to death. And a director/producer in Los Angeles, originally from Rome, and a … 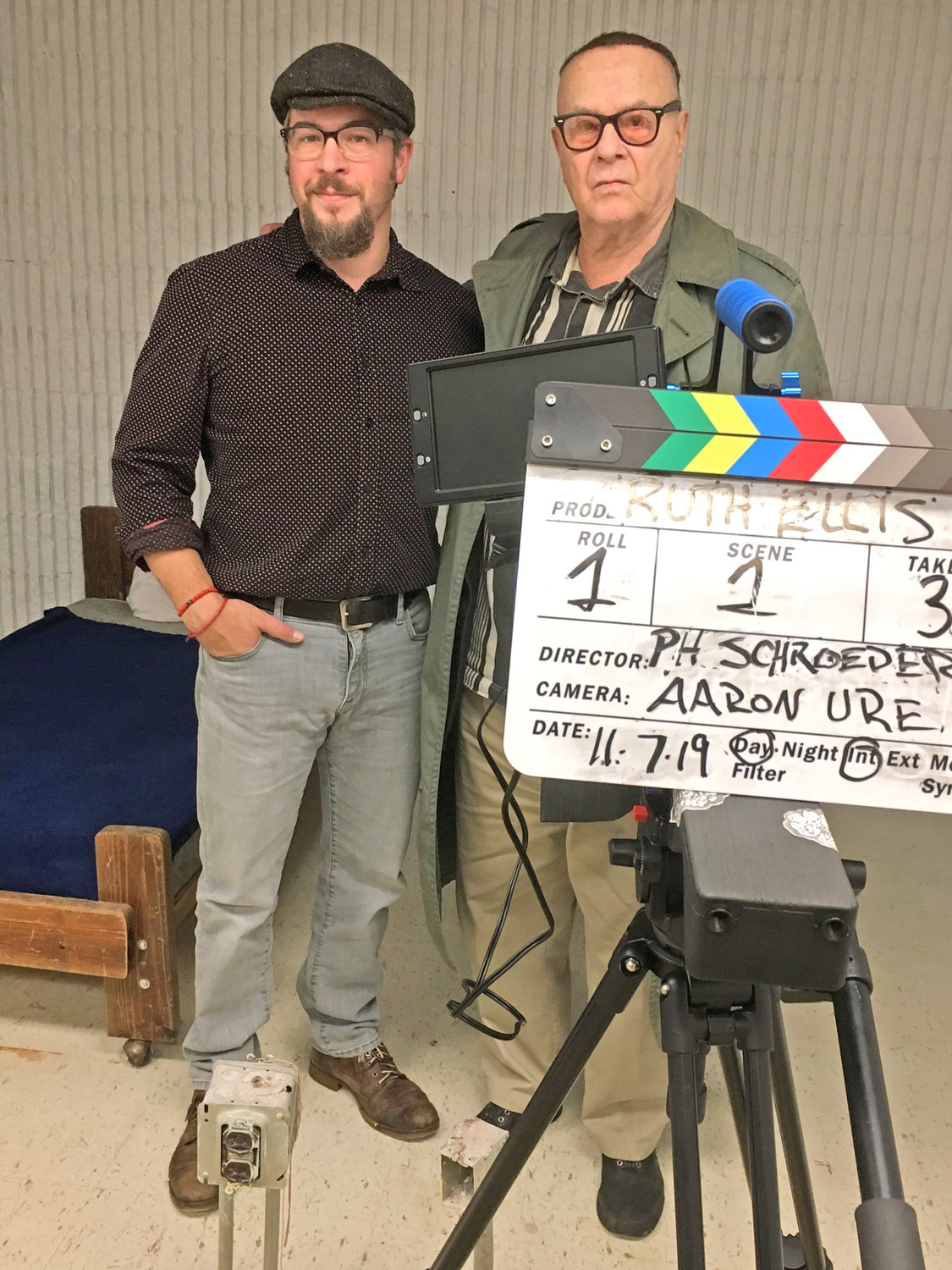 COLLABORATORS — Aaron Ure, videographer, and producer/director Peter-Henry Schroeder pose for a photo inside a room at Oneida Municipal Center they are using to shoot the feature film, “Ruth Ellis.” 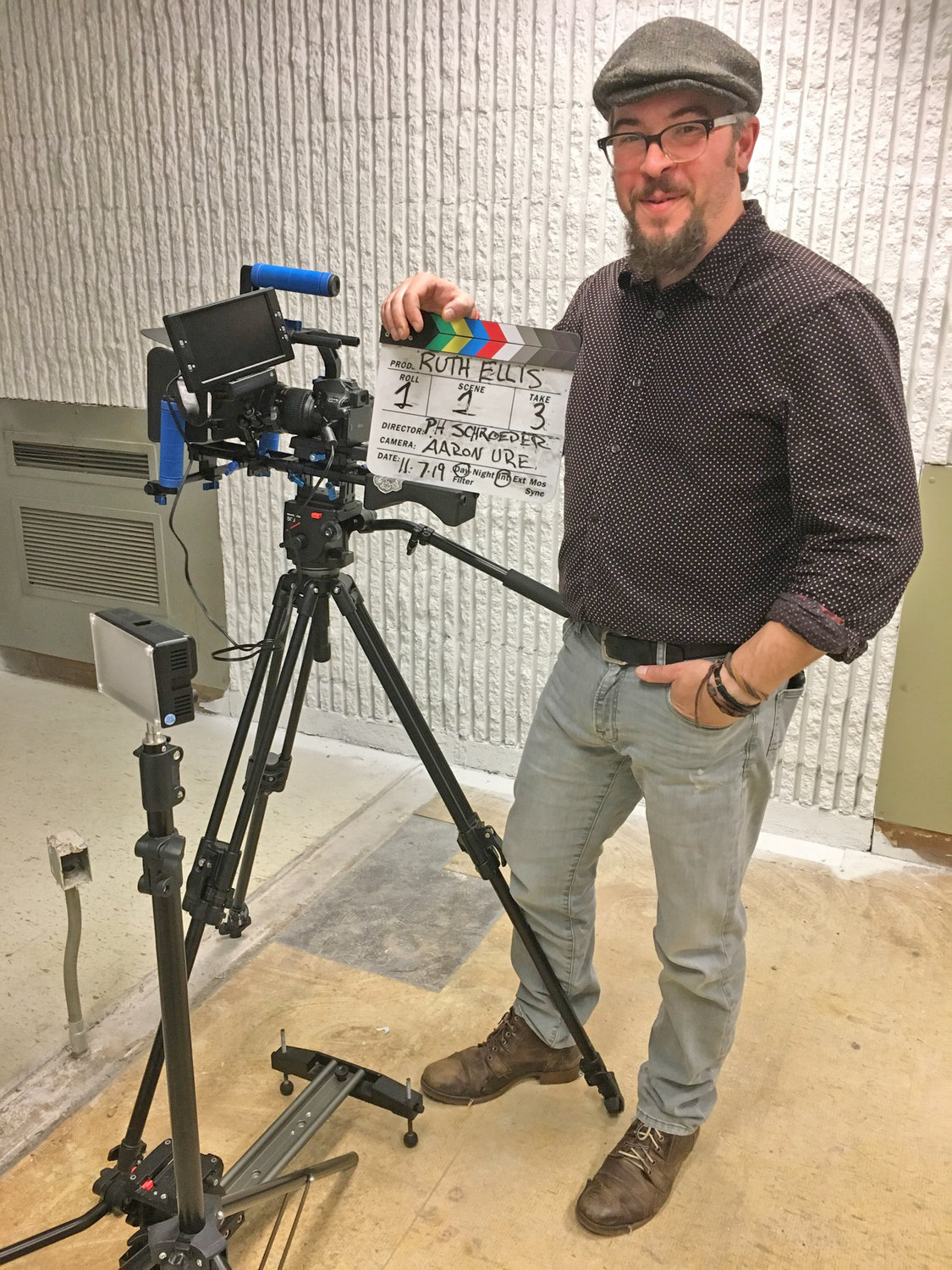 LIGHTS, CAMERA… — Aaron Ure, of Image House Productions in Barneveld, stands by his camera waiting to shoot scenes of the feature-length film, “Ruth Ellis” in Oneida. A local casting call is going out for an actress qualified to play the lead role. 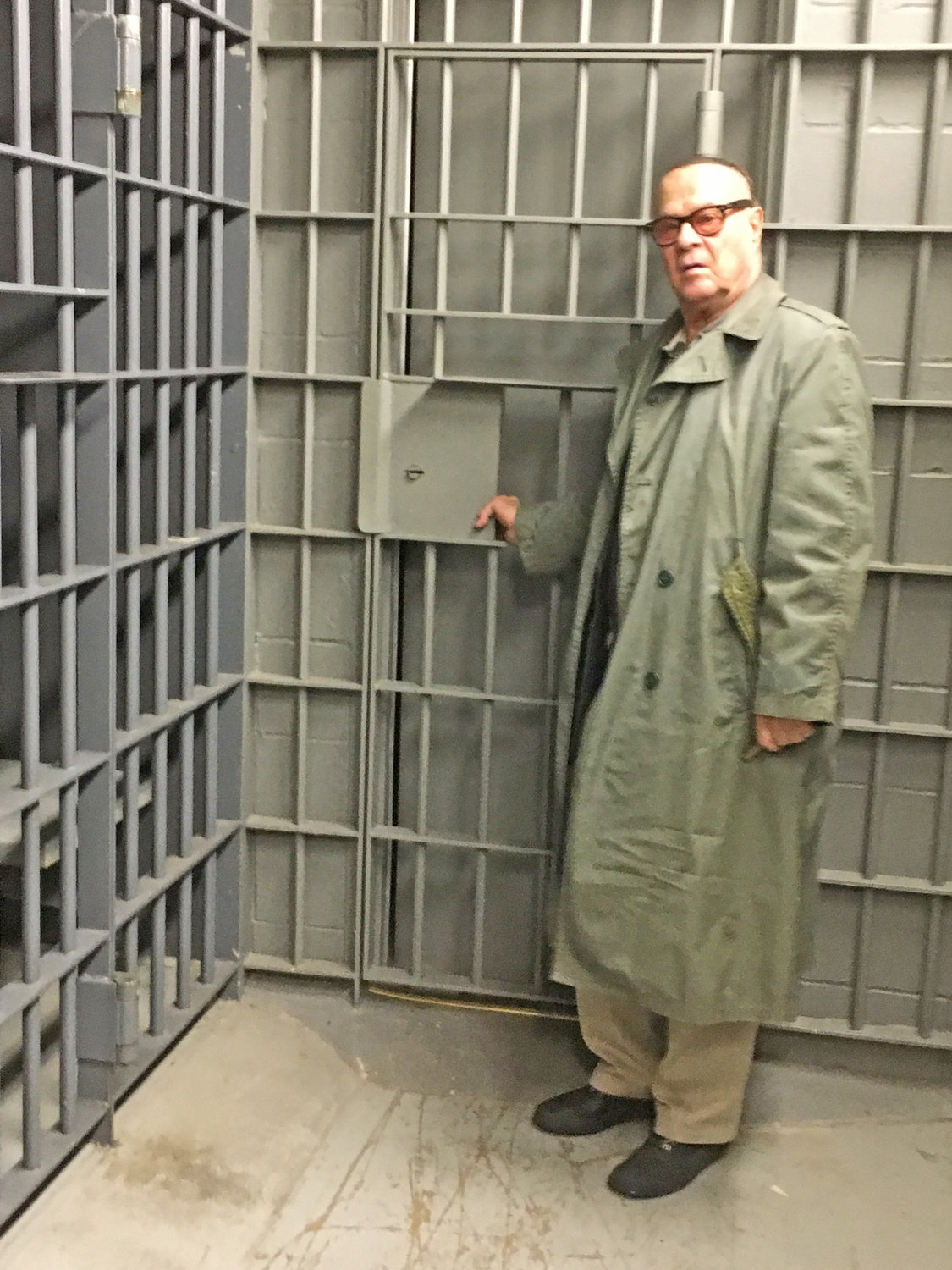 BEHIND THE SCENES — Los Angeles actor/director/producer Peter-Henry Schroeder, native of Rome, stands inside one of the former Oneida City Jail cells, which will act as the setting for his film, “Ruth Ellis,” that is being shot locally.
Previous Next
Posted Saturday, November 9, 2019 11:32 am
Nicole A. Hawley
Staff writer
email

ONEIDA — She was the last woman hanged in Great Britain after being convicted of shooting her lover to death.

And a director/producer in Los Angeles, originally from Rome, and a cameraman/videographer from Barneveld, are teaming up to tell her story.

Peter-Henry Schroeder, owner and operator of PHS Productions, owes his acting roots to his mother Marie Angotti-Schroeder, who while living in Syracuse, enrolled her sons and daughter in the Syracuse Children’s Theatre, which continues today. While his two brothers pursued other avenues, Peter-Henry and sister Maria Curley, continued with their passions for the performing arts. Curley is the co-founder of Present Company Productions, an Oneida-based theater company that produces, among its projects, dinner theater at Theodore’s Restaurant in Canastota.

“Mom put us on stage,” Schroeder said. “I studied at the Syracuse Children’s Theatre, which was a very good program, but I was the only one who stuck it (acting) out and made a career out of it.”

Schroeder would go on to study privately at Carnegie Hall and eventually make his way to California, where he would do work in television and films. To his credit, he worked on episodes of television series that include Cheers and Enterprise (Star Trek), and he also played a role in Ben Affleck’s “Argo,” which won the Academy Award for Best Picture in 2013, as well as several other films from the 1970s to present. Schroeder also taught acting at the American Academy of Dramatic Arts in Pasadena, Calif., before starting his own acting workshop. More about his work can be found on his professional website, www.actorartist.com.

In recent months, Schroeder has found time to visit his roots while also working on some of his latest projects. That includes shooting the screenplay for “Ruth Ellis,” which he’s considering making into a feature-length film, right at the former jail located at Oneida Municipal Building.

The actor/director/producer has teamed up with Aaron Ure of Image House Productions in Barneveld, who is serving as videographer for the project. Ure started out specializing in wedding (still) photography, which he still makes part of his business, but he also shoots music videos, documentaries, commercials and short films.

Ure, who studied at the New York Film Academy, signed onto the project about six months ago when he heard about Ruth Ellis “through the grapevine” from a friend and colleague he has been known to do other film productions with. The videographer’s love for the camera was passed down from his father, as well as his passion for classic movies.

“My father was a lover of all classic films and I would get to watch them with him over and over again,” Ure recalled.

As his knowledge and passion for film production grew with him, “Analytically, they would teach me about certain ways of setting up a shot,” the videographer surmised. “When you’re shooting a film, you have this almost god-like control of time — you can make things stop or slow them down — you get to make a scene look exactly how you see it in your mind. And then during the editing process, you get to piece different things together and you start to see them in ways you didn’t see them before. It’s fun to challenge yourself in that way.”

The story of Ruth Ellis actually came to Schroeder through a former student from his acting workshop. A native of Scotland, Fiona Ormiston is an actress and playwright with such television credits as Taggart, The Crews and Outlander.

“Fiona studied acting with me for three years in L.A. and then she said, ‘Peter-Henry, I’d like to write,’” the producer remembered. “She took off for Scotland, and I hadn’t heard from her in a year or two. Then I get this manuscript in the mail and she said, ‘This is what I did.’ I read it and I was actually blown away by it.”

That was about 5-6 years ago, with an original goal of shooting Ruth Ellis as a short film. That notion evolved into the idea of shooting a feature-length movie to be featured at various film festivals.

“I want to do it improvisational-like, documenting moment-to-moment, if we could only get the girl,” Schroeder said.

Unfortunately filming is on a brief hiatus as Schroeder continues searching for a lead actress to play Ellis. There is an open casting call going on right now.

Ruth Ellis was known as a model and night club owner/hostess involved in a tumultuous and abusive relationship with then race car driver David Blakely. On the night of April 10, 1955, she drove to a pub in Hemstead and waited for Blakely to walk out. When she yelled his name and he ignored her, she pulled out a loaded .38 caliber pistol from her purse and fired at least five shots, according to historical accounts. Ellis then went over and stood over Blakely’s body and fired a few more rounds before turning herself in to an off-duty police officer.

Ellis’ trial lasted only two days that June and on July 13, 1955, she was hung. Following her death, there was a public outcry to abolish the death penalty in the UK, and executions by hanging were outlawed. Ten years later, executions were totally abolished.

Schroeder said while filming the story, he hopes to include some flashback scenes that show the crime taking place. At Oneida Municipal Center, however, he and Ure have been given reign over the mostly-vacant building, using an abandoned room and the former city jail that hadn’t housed inmates since 1989.

It is meant to be the setting for the time Ellis was incarcerated and awaiting her execution. Oneida City Fire Department even lent the pair an old bed to use as part of the sets, which also includes a simple wooden table, as well as a copy of the Bible and a cross bought at a local second-hand shop.

It may sound simple, but the producer/director and videographer both believe it’s the perfect place to create their authentic scenes.

“It’s become sort of a community effort,” said Schroeder as to how city officials and residents have stepped up to assist with filming his project.

And how did a filmmaker from Los Angeles learn about this small, abandoned jail in upstate New York?

“We were at Napoleon Cafe for our first meeting” on the film, Ure explained. “Peter-Henry and I were talking and discussing where we could shoot the film, and one of the waitresses actually pointed over at City Hall and said, ‘Why don’t you do it there?’”

And so the back drop for Ruth Ellis was born. Ure said he’s already completed the “second unit shooting,” which documented the jail cells. Ormiston, who has already played the role of Ellis in Edinburgh, even sent the curly blonde wig she wore via snail mail to Schroeder, so that the actress playing the lead role would have it for filming.

What’s quite unique about the project is that not only is Schroeder trying to find a local, upstate actress to take on the lead role, they will also have the rare opportunity of conducting their audition in the same, exact setting where filming will take place.

Shooting “should only take a couple days,” Schroeder said. “We just need an actress to help us get this off the ground.”

Schroeder is looking for a woman in her mid to late 20s (possibly early 30s), who is about 5-feet, 3-inches tall, weighing around 105 pounds. The actress will need to have experience and ability speaking with British, Scottish and French accents. And if they’re brunette, they should submit a resume anyway, because he’s now in possession of the blonde wig, Schroeder said.

Resumes and/or videos may be sent to PHS Productions at phsproductions@gmail.com or peterhenryschroeder@gmail.com, or contact Schroeder at 310-497-5930.