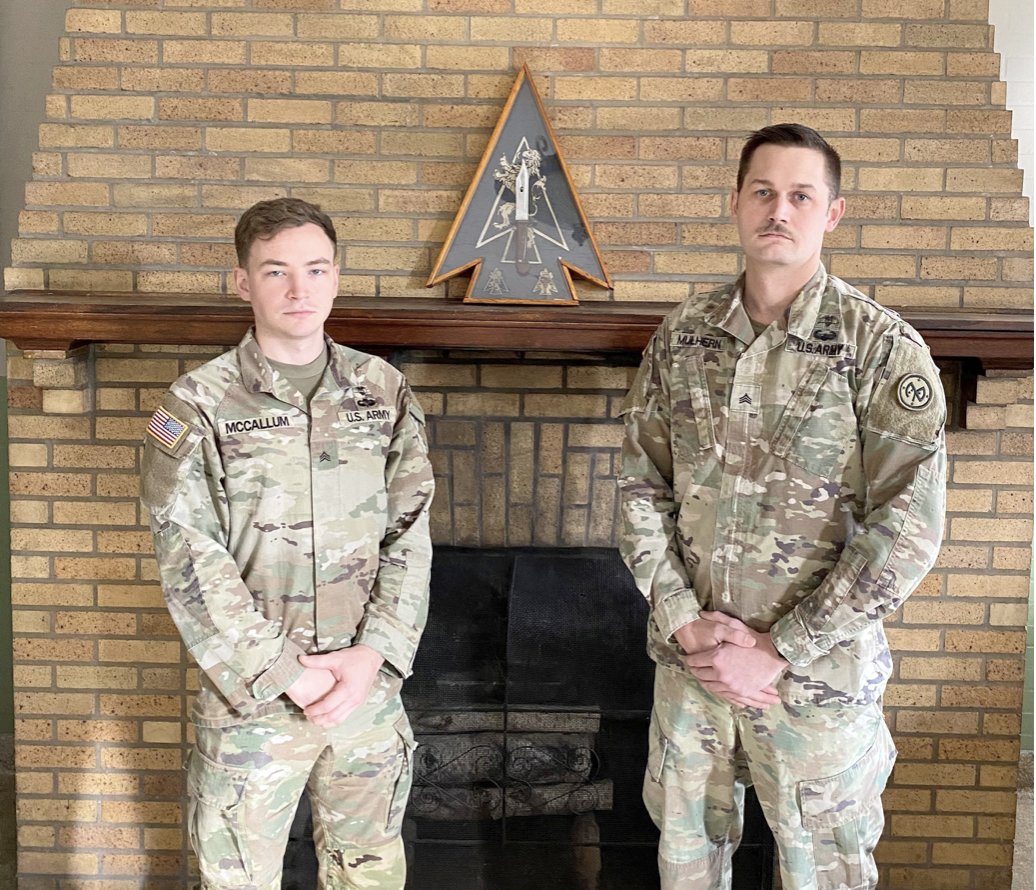 Army National Guard sergeants Klayton McCallum, a Syracuse resident, and Thomas Mulhern, from the hamlet of Cincinnatus, will compete at the U.S. Army Best Medic Competition at Fort Polk, Louisiana. The 2nd Battalion, 108th Infantry is headquartered in Utica and has elements in Ithaca, Geneseo, Morrisonville, Gloversville, Glenville, and Leeds.

The competition tests the soldiers’ physical fitness, endurance, military knowledge, and medical skills. They will be going around the clock, with little sleep, and get thrown challenge after challenge to test their abilities.

In 2022, Staff Sgt. Dylan Delamarter, the 108th’s medical platoon sergeant, and Sgt. Ethan Hart, a medic in the platoon, represented the Army Guard against 21 other two-man teams.

Getting selected for the competition is a real honor, but there is a lot of pressure too, Mulhern said. Their names were put in two months ago, McCallum said, but they only got a final confirmation earlier this month, he said.

First Sgt. Michael Hoffman, the top non-commissioned officer in the battalion headquarters company, said he is confident that McCallum and Mulhern will meet the challenge. “These two are going to do outstanding,” Hoffman said. “They are highly technically and tactically proficient and physically fit. “

McCallum, who serves full-time as the 108th Infantry’s medical operations non-commissioned officer, joined the Army in 2014. He served as an airborne infantryman in the 173rd Airborne Brigade in Vincenza, Italy.

In 2017 he joined the New York Army National Guard and became a medic.

He changed from active duty to the guard because he liked soldiering and “wanted to keep his foot in the door” as he pursued a civilian career, McCallum said. He decided to become a medic, the military occupational specialty “68 Whiskey,” because he had been inspired by two medics he served with in the 173rd, he explained. While serving in the guard he was part of the COVID-19 response mission and deployed to Washington D.C. in the aftermath of the January 6, 2021 Capitol riot.

Mulhern joined the Army in 2012 and served as a medic in the 101st Air Assault Division before joining the New York Army National Guard in 2016. He works in construction, but he served on full-time as the medical readiness non-commissioned officer for the FEMA Region II Homeland Response Force for several years. He was also one of 7,077 soldiers and airmen who took part in the state’s COVID-19 response.

The two medics both hold the Expert Field Medic Badge, or EFMB, which is the medical equivalent of the Expert Infantry Badge. Both men have also served as cadre during EFMB competitions held by the 10th Mountain Division at Fort Drum.

Mulhern and McCallum both have active duty and Army Guard experience which should make them successful at the competition, Knapp said. “These combat medics are true professionals and capable of delivering tactical combat casualty care under the toughest conditions,” he said.

In 2022, the request for a medical team to participate in the Army’s competition came at the last minute, said Command Sgt. Major David Piwowarski, the New York Army National Guard’s top enlisted leader. Even then, the team beat half of the other competitors, he said.

This year the 108th volunteered early to field a team.

“I think that Army Guard knows that they can count on New York to send ready soldiers always,” Piwowarski said. “With the extra lead time, I am confident that this year’s competitors will excel, and make New York proud.”

To get ready for the Fort Polk competition, Mulhern and McCallum tapped into the experience Delamarter and Hart gained during the 2022 event.

Hart deployed in June to the Horn of Africa with the New York Army National Guard’s Task Force Wolfhound, but Delamarter has been working with them on a training plan, Mulhern and McCallum said.

They got time on the Medical Simulation Training Center at Fort Drum to hone their skills, and did medical skills training with Delamarter, McCallum said. They spent time making sure they were technically ready, he said.

Because there’s swimming involved, Delamarter also got them access to a swimming pool where they could jump in with their gear.

The biggest challenge, Mulhern said, is that their competitors have been doing this for months. They have competed in battalion, brigade, and division competitions to get to the final competition. “They have been 175% for months,” he said.

But, McCallum said that he and Mulhern “are immersed into it right now. We are going to execute once we get on the ground; whatever tasking they ask of us, whatever they want us to do, and do it with great enthusiasm and positivity,” he said.