While they didn’t have regular classes last week, a pair of Rome Free Academy juniors didn’t take spring break off. Instead the duo of Dominick Cangialosi and Stone Mercurio participated in the … 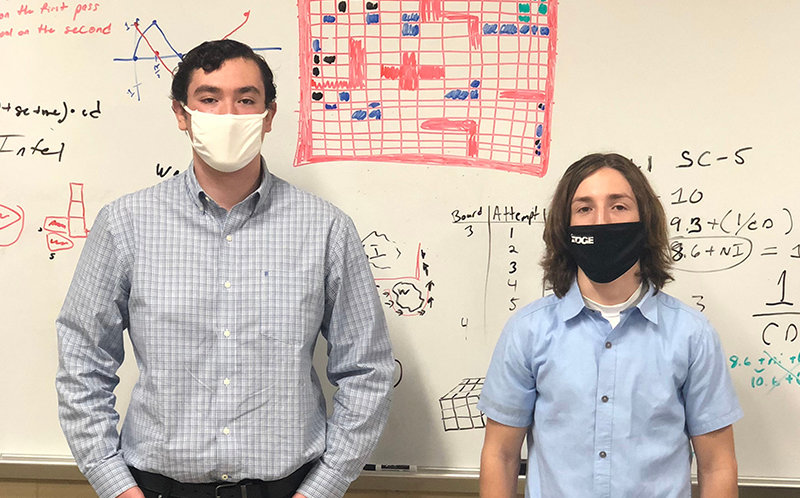 While they didn’t have regular classes last week, a pair of Rome Free Academy juniors didn’t take spring break off. Instead the duo of Dominick Cangialosi and Stone Mercurio participated in the first-ever Virtual Challenge Competition – sponsored by the Air Force Research Laboratory Information Directorate and supported by the Griffiss Institute.

The competition has three parts: a practical exercise, research and a presentation.

The goal of the practical exercise is to use machine learning to teach a simulated robot unit to navigate through a randomly generated course. Along the way there are game-ending traps and valuable information. The students did not have direct control over their unit and had to have a solution that could work under many different terrain setups.

“After the practical exercise, the students prepared and presented a report of their methodology, application and results to judges from AFRL and Griffiss Institute. They also answered questions about the exercise,” said Al Bangs, RFA technology teacher.

This exercise is more difficult than it looks. “Through this exercise you are building solutions to get your robot to the finish. It’s not complex math but involves conceptual thinking,” said Cangialosi.

Mercurio agreed and added, “the exercise interesting… it was like war gaming scenarios, where you guide the pilot out of enemy territory before it is shot down.”

The Air Force sometimes uses games and simulations to train warfighters on how to react to certain situations and make decisions in similar real-world scenarios. The game is grid-based and turn-based, and in this scenario, there is an airman trying to survive harsh terrain and get to friendly territory, while collecting pieces of intel along the way. The airman wants to do this as quickly as possible, to conserve energy and reduce the risk of capture.

The RFA pair came in third place in the competition; they will receive $1,000 scholarship.