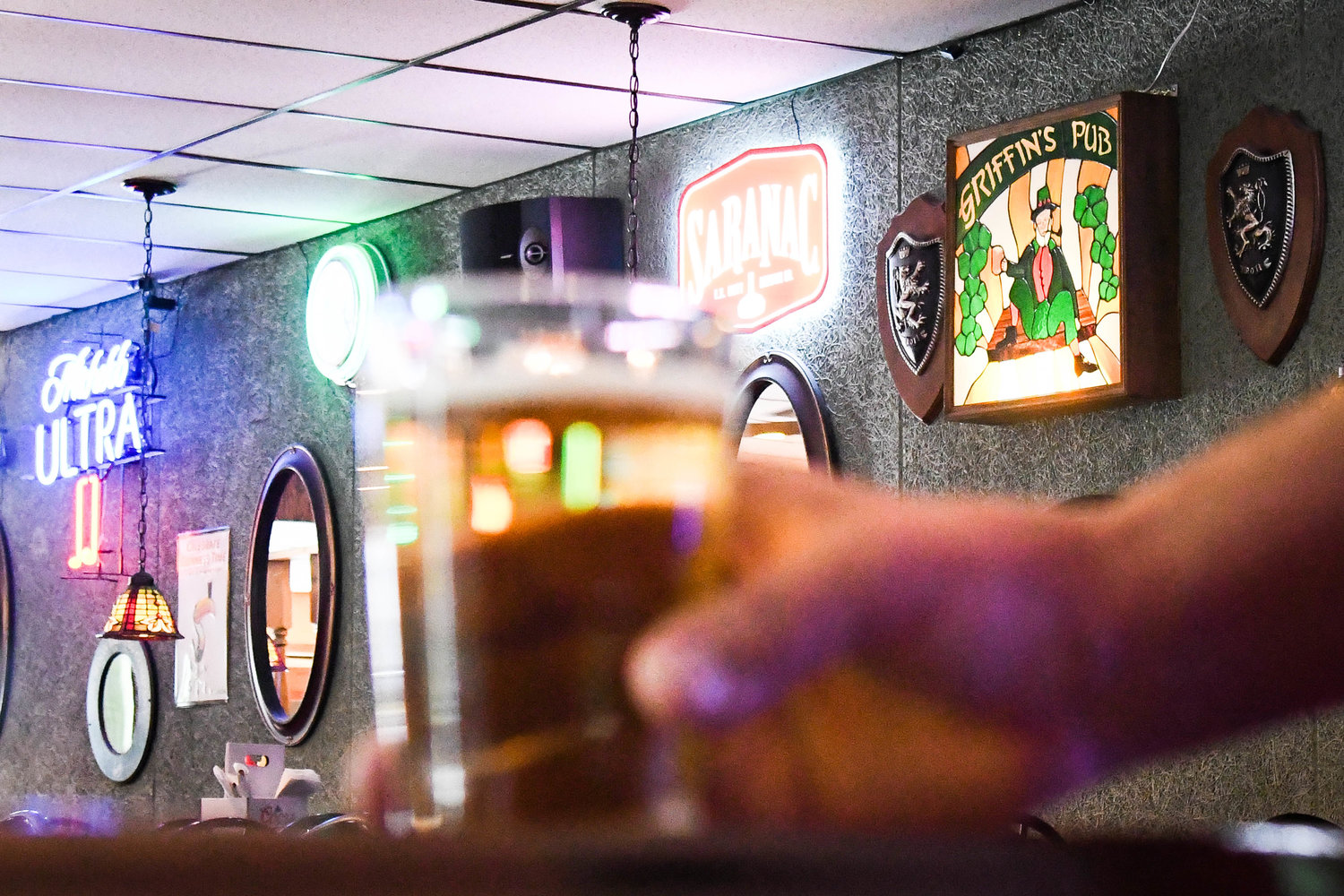 A man drinks a beer at Griffin’s Pub in Utica.
(Sentinel photo by Alex Cooper) 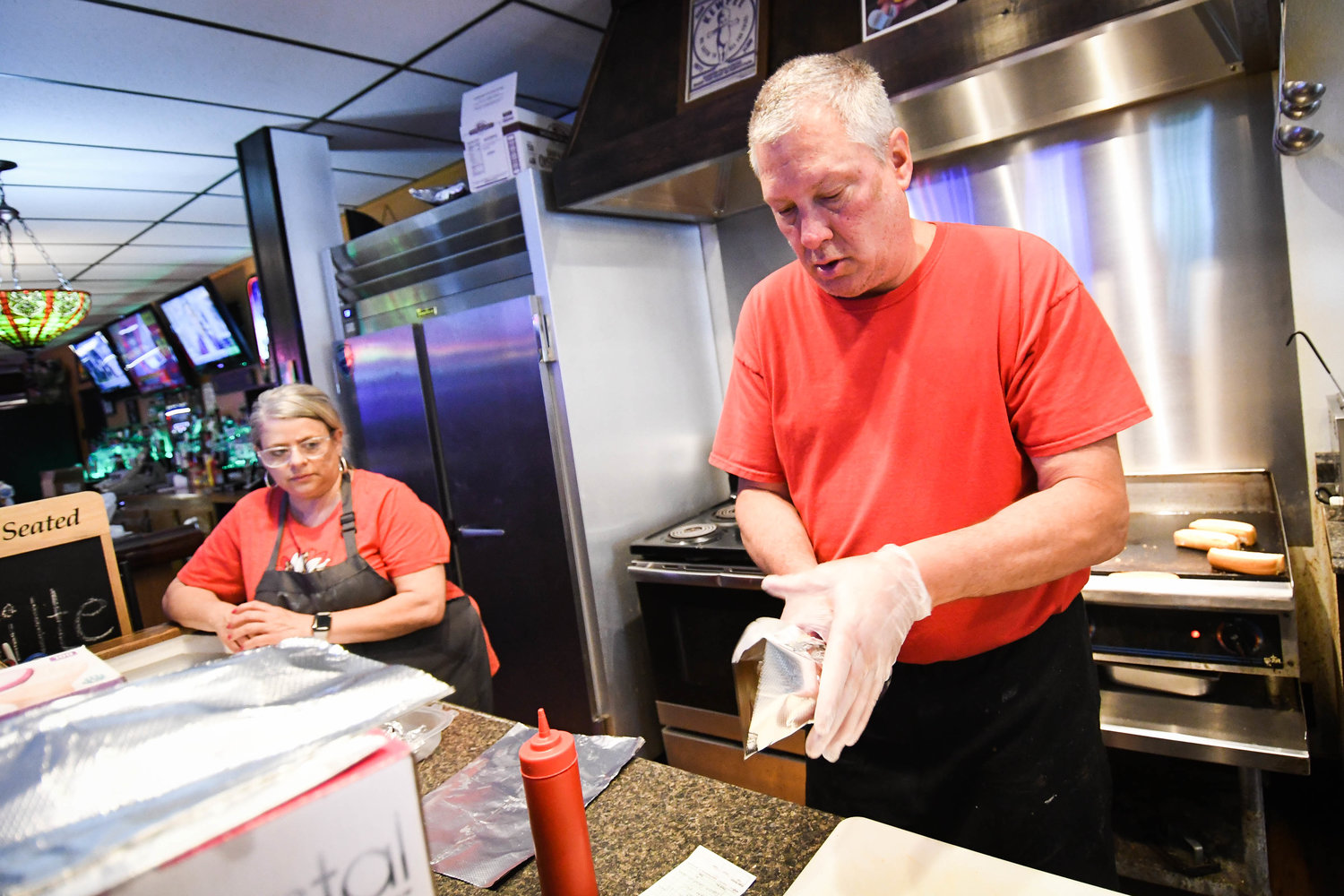 Michael Griffin works on to-go orders in the kitchen at his bar, Griffin's Pub, in Utica. “If you come into this place, hopefully, you leave with a great experience. Most people will go out of their way to talk to you,” he said. “It’s a very friendly place.”
(Sentinel photo by Alex Cooper) 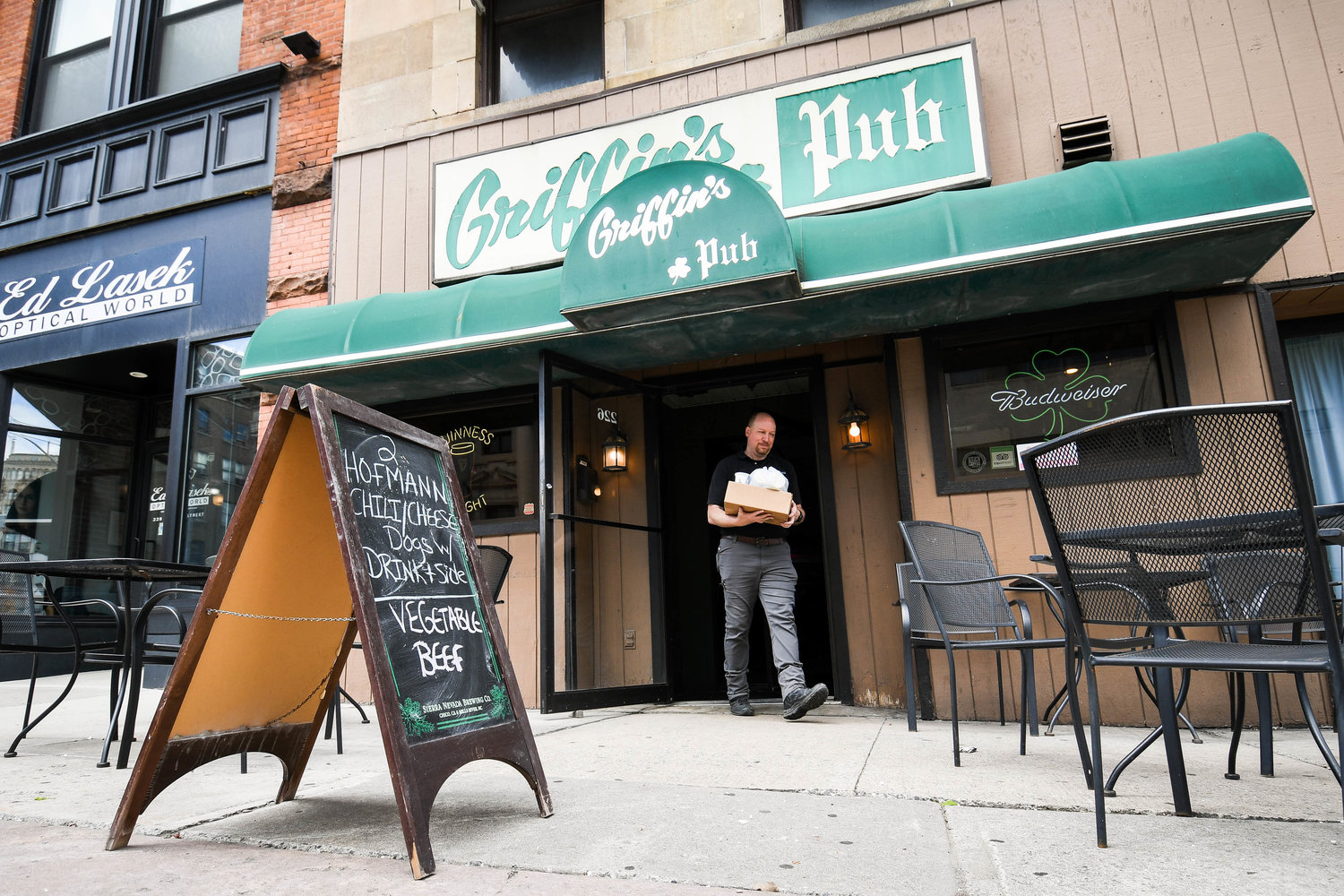 A customer leaves with a to-go order outside of Griffin's Pub in Utica.
(Sentinel photo by Alex Cooper)
Previous Next
Posted Sunday, May 22, 2022 12:00 pm
Cara Dolan Berry
Staff writer
email

UTICA — Over half a century ago, Anthony Griffin opened a bar on Columbia Street in Utica called Griff’s. His son, Michael, helped out at what he remembers as “mostly a bar,” where he manned two deep fryers to serve “bar food for the football crowd.” That’s where it began.

In 1983, Anthony purchased the Reed Building at 226 Genesee St., in Utica, kitty corner from the Stanley Theatre and just up the street from “The Aud.”

“Right in the middle of everything,” Michael said. There, Anthony opened Griffin’s Irish Pub.

Born in Utica, Michael never ventured far. He tried college on for size, heading “up North” to "Canton Ag. Tech." But it just didn’t fit like the family business. So he came home, “ready to go to work.”

Michael met his wife of 29 years, Debbie, when she worked part-time at Griff’s. The Griffins have made their home and raised their two children in Utica. They also raised an Irish Pub to be a welcoming place.

“We have a lot of regulars,” Michael said, with a nod to a trio of them bellied up to his bar, tilting drafts and waxing politics.

“If you come into this place, hopefully, you leave with a great experience. Most people will go out of their way to talk to you,” he added. “It’s a very friendly place.”

Michael promises that “great experience” to the “hotel people” – guests at the Delta Hotel, located “right next door.”

“You find out where they’re from, where they’ve been,” Michael said. “It’s fun listening to their stories.”

Michael tipped that hockey fans are likely to enjoy a sighting and sip after the game with players opposing the Comets or Utica College’s teams, as they often stay at the Delta.

Debbie devoted herself to stay-at-home motherhood, then, about 17 years ago, took her place by Michael’s side at the pub.

“My wife and I do all the cooking,” said Michael. “We have no other no other people.”

So, when the Griffins grab a rare vacation, the kitchen closes. But the bar stays open.

Of this job, Michael noted, “you don’t leave it. You live it.”

The first impression of Griffin’s Pub is curb appeal, as rich green and white awnings convene at a center arch over the front door, donned by the Griffin’s Pub sign set off by a shamrock, like a punctuation mark.

Debbie is delighted to promise a reimagining of their storefront, complete with sidewalk seating, “coming soon!”

When you cross the threshold, Michael himself will likely greet you from the small exposed kitchen to the right. From there, Griffin’s stays true to pub tradition. A long, narrow room, where the bar stretches back on one side and a row of tables parallels it across a ribbon of floor. The dim yet warm lighting is cast by Meyda Tiffany chandeliers. Meyda Tiffany is as local as Griffin’s Pub itself, headquartered down the road in Yorkville. The typical, tunnel-like tavern opens up in back to a generous space to gather, with a billiard table, foosball table, dart boards, and a juke box.

It is clean and cared for, simple yet sweet, with the Griffin’s Pub moniker at almost every glance. A painting of the exterior hangs proudly — a personal gift from a patron — a Griffin’s Pub sign shines over a cooler, and, in keeping with the stained glass motif, the name is set in the colored stuff, too.

Michael noted that the stained glass sign was originally inlaid over the entrance when they first opened. During a remodeling, he told the crew, “I wanna keep that.” It’s now framed and hung over an interior door. As he gave it a glance, it inspired a smile from the proprietor.

The pub pours eight beers on tap, including Utica Club and Guinness – “of course” – and almost any brew that comes in a bottle. In an ironic departure from the old Griff’s on Columbia Street, where anything edible was deep fried, Griffin’s has no operating fryers on Genesee.

The menu is simple but satisfying: snacks, salads, sandwiches, and burgers, with a choice of chips or – the local staple – house-made mac salad. The chicken Caesar salad was a generous portion of impressively fresh lettuce, shaved parmesan, croutons with a crunch, and tender chunks of chicken breast with just enough char to their grill. As any Caesar salad lover knows, the dressing makes or breaks the stuff, and Griffin’s strikes a perfect balance of creamy/savory without overpowering. A taste of the mac salad was a must and highly recommended for those who like theirs straight up – just mac and mayo with a dash of salt.

The egg salad and olive sandwich is noted in some online review, but Michael stops short of saying it’s special.

It is an Irish joint, after all, and even one as spartan when it comes to grub as Griffin’s has corned beef in the public house.

Michael dubs his Reuben the specialty of the public house.

“We do have the best Reuben in Utica,” Michael boasted. “Everyone who comes in here says it, so it must be true.”

It can’t be coincidence that Anthony Griffin bought the building at 226 Genesee Street to open an Irish Pub. The Reed Building stands right on the route for Utica’s St. Patrick’s Day Parade, a local tradition dating back to 1824.

Just two years shy of the march’s bicentennial — after suffering through silent streets on two successive St. Paddy’s Days due to COVID — Utica ramped the beloved procession back up this year. A forecast warning of blizzard conditions scared Buffalo and Albany — the second largest city in New York State and the capital city respectively — into cancelling their annual parades.

Griffin’s opened at 10 a.m. that morning — as they do every "Parade Day" — and, as predicted, white-out conditions dumped snow into blizzard-level winds.

But, in Utica, the parade marched on.

Said Michael, “and the pub was packed!"

Griffin’s Pub is located at 226 Genesee St. in Utica. They are open for food and drink, 11 a.m. to 2 a.m. Monday through Friday. On Saturdays, the bar is open from 4 p.m. to 2 a.m. with the kitchen open on “event days” at the Stanley Theatre, the Adirondack Back Center, or occasions such as the Boilermaker or local college graduations. They are closed on Sundays and Christmas Day.