EAST SYRACUSE — The general consensus among members of the Oriskany softball team is they have a relaxed, tight-knit group. That was apparent before the Section III Class D championship game when … 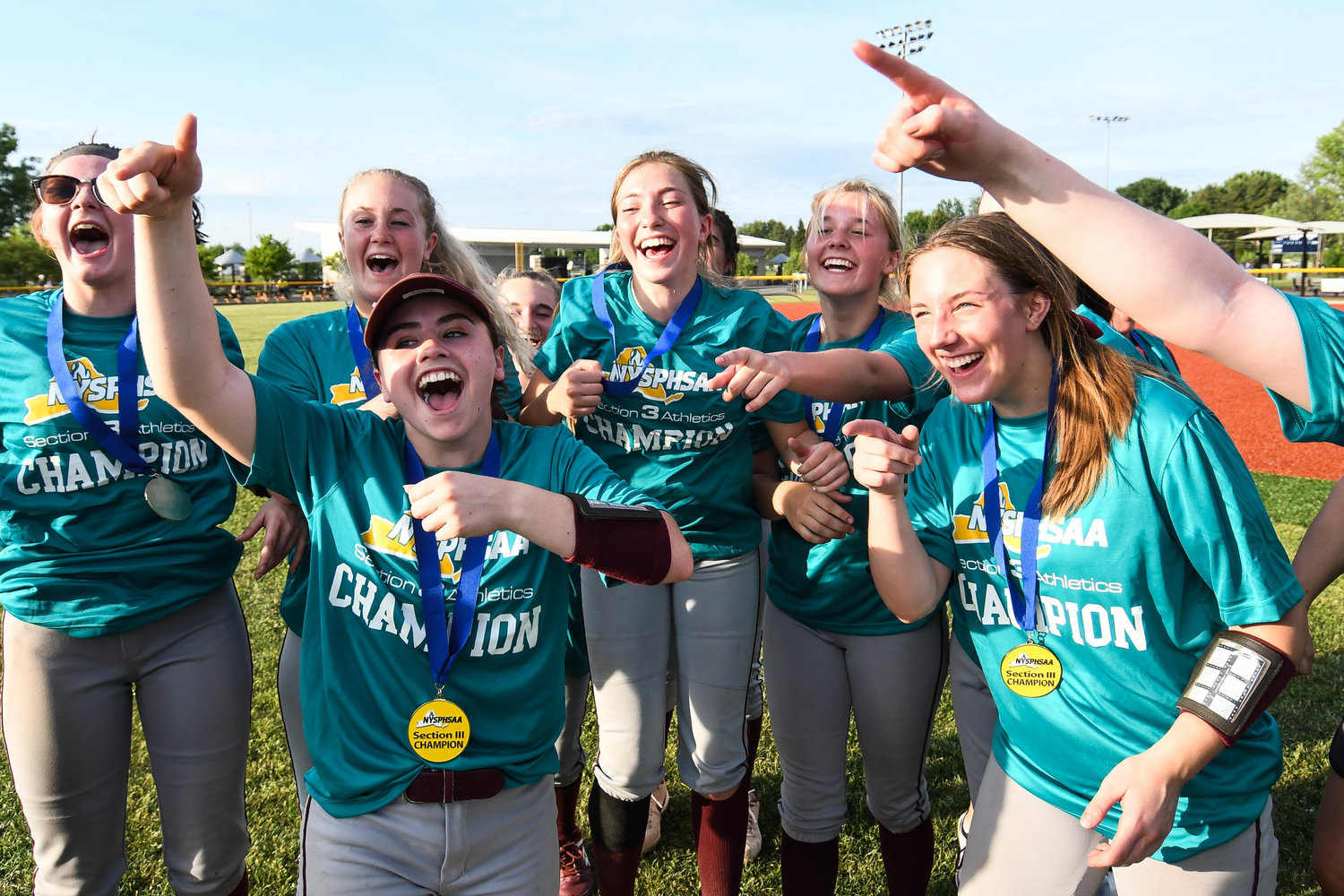 Oriskany players celebrate with their championship shirts and medals after defeating Poland 5-4 in the Section III Class D final on Tuesday at Carrier Field in Syracuse.
(Sentinel photo by Alex Cooper) 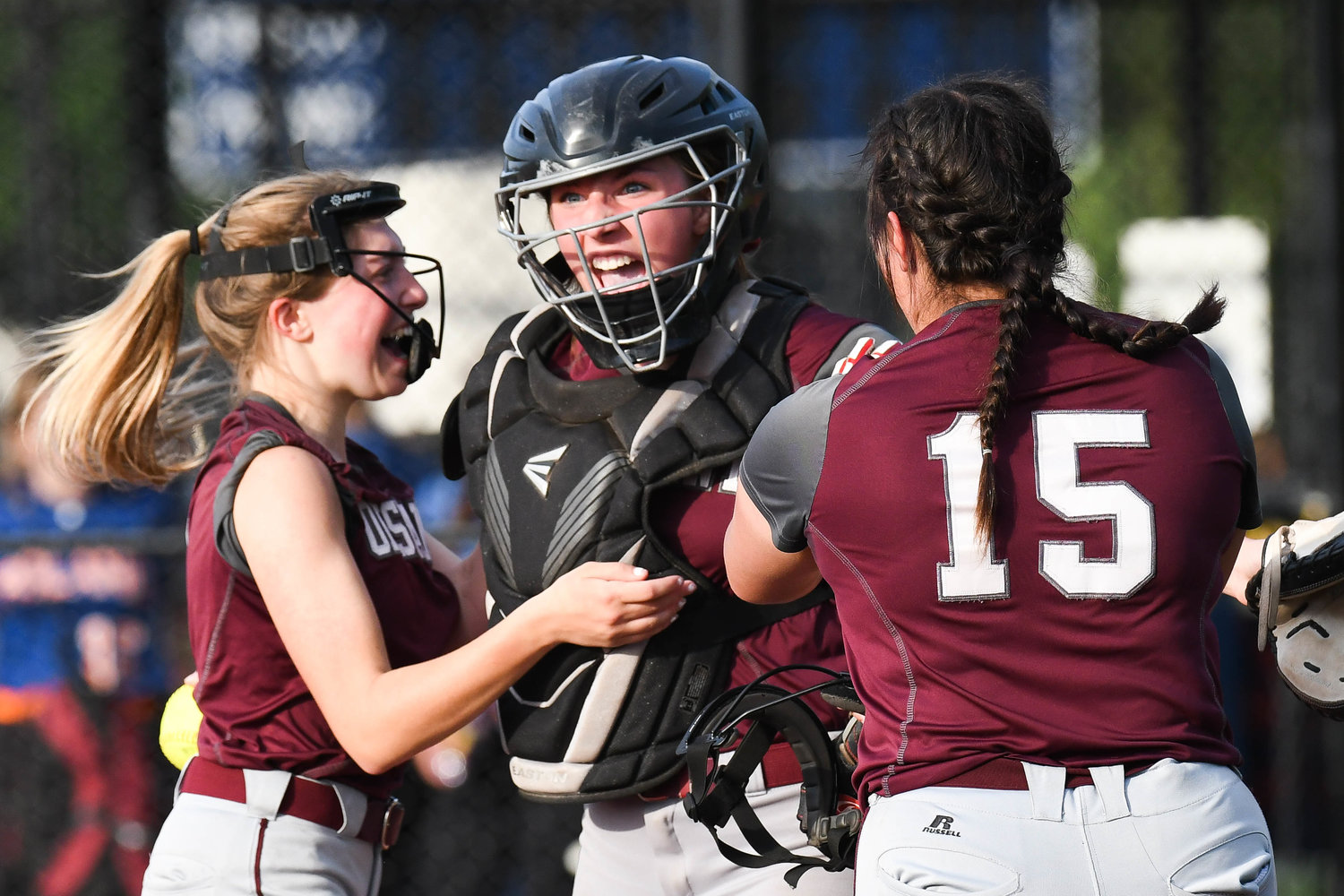 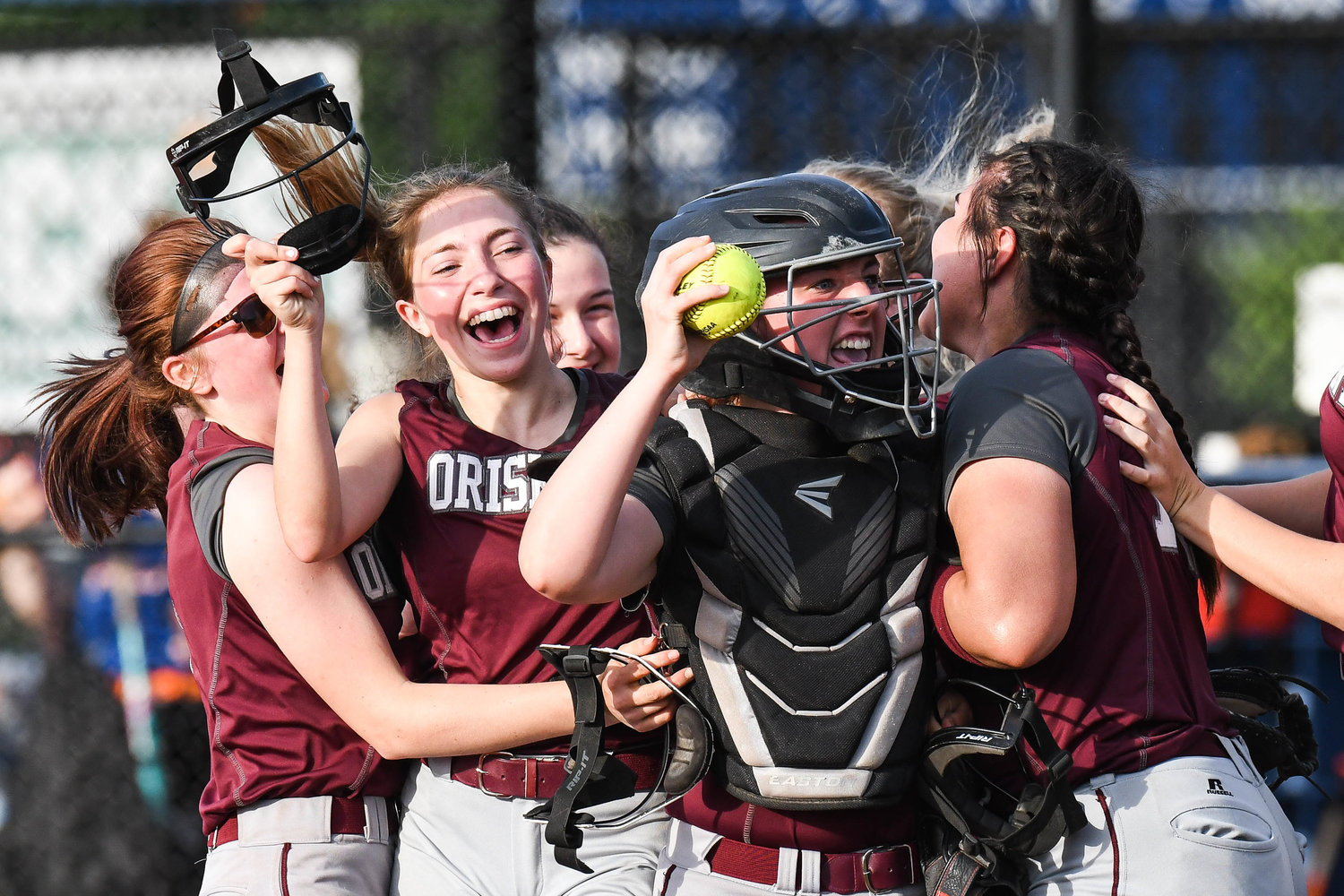 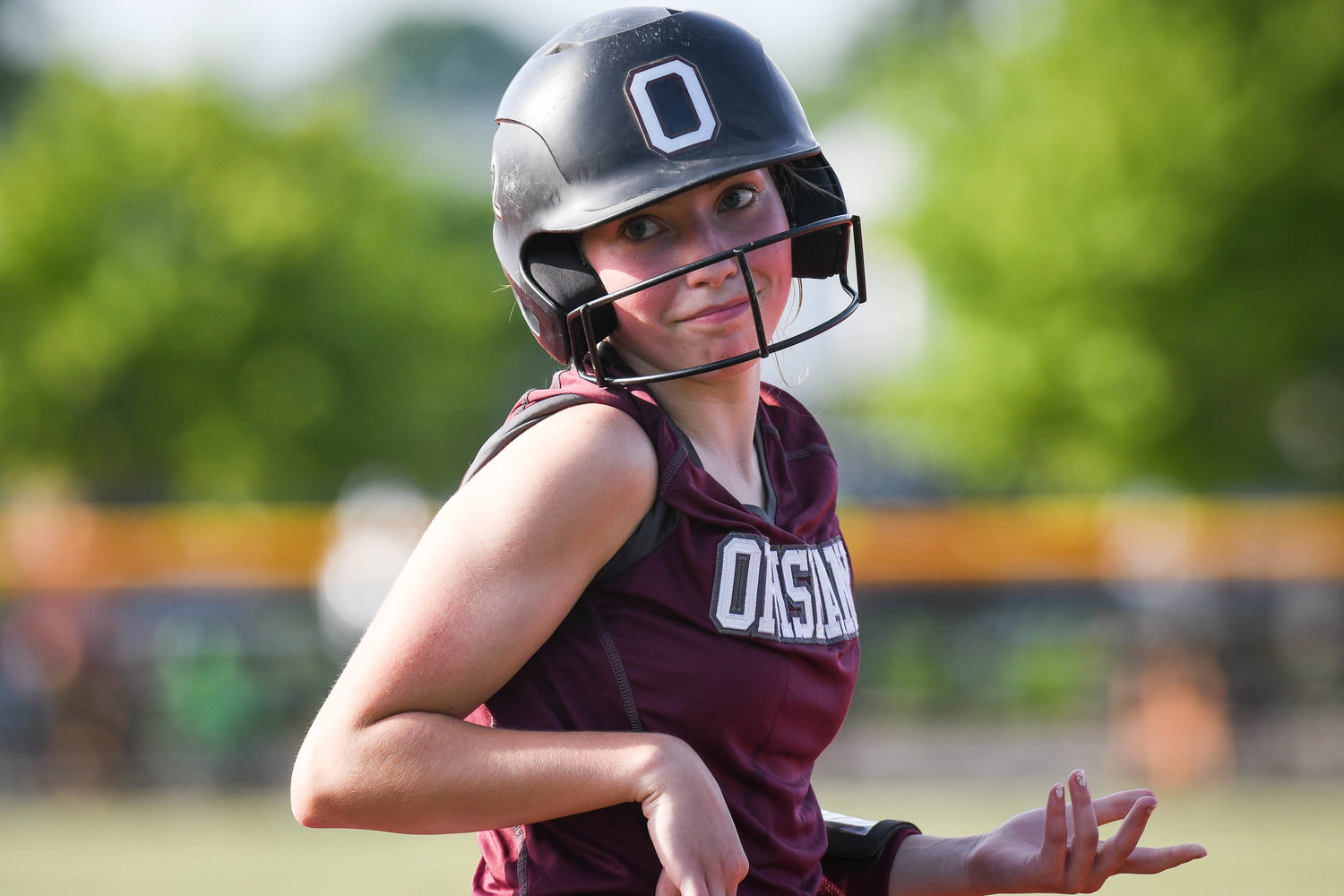 Oriskany player Juliet Tagaliaferri shrugs at her coach after making it safely to third base during the Section III Class D final against Poland on Tuesday at Carrier Park in Syracuse. Oriskany won 5-4.
(Sentinel photo by Alex Cooper) 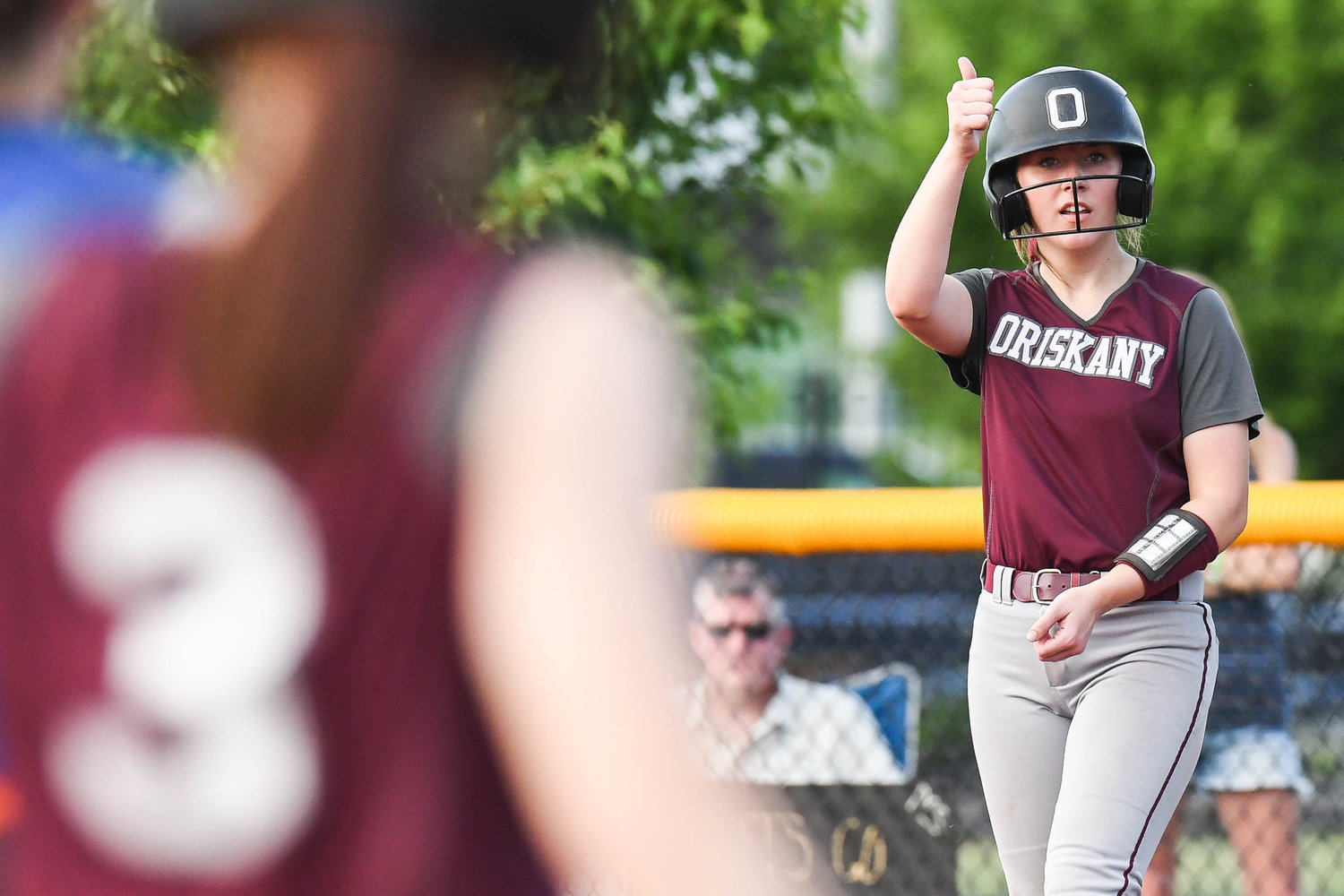 Oriskany catcher Kaelyn Buehler gives a thumbs up to a teammate from first base during the Section III Class D final against Poland on Tuesday at Carrier Park in Syracuse. Oriskany won 5-4.
(Sentinel photo by Alex Cooper) 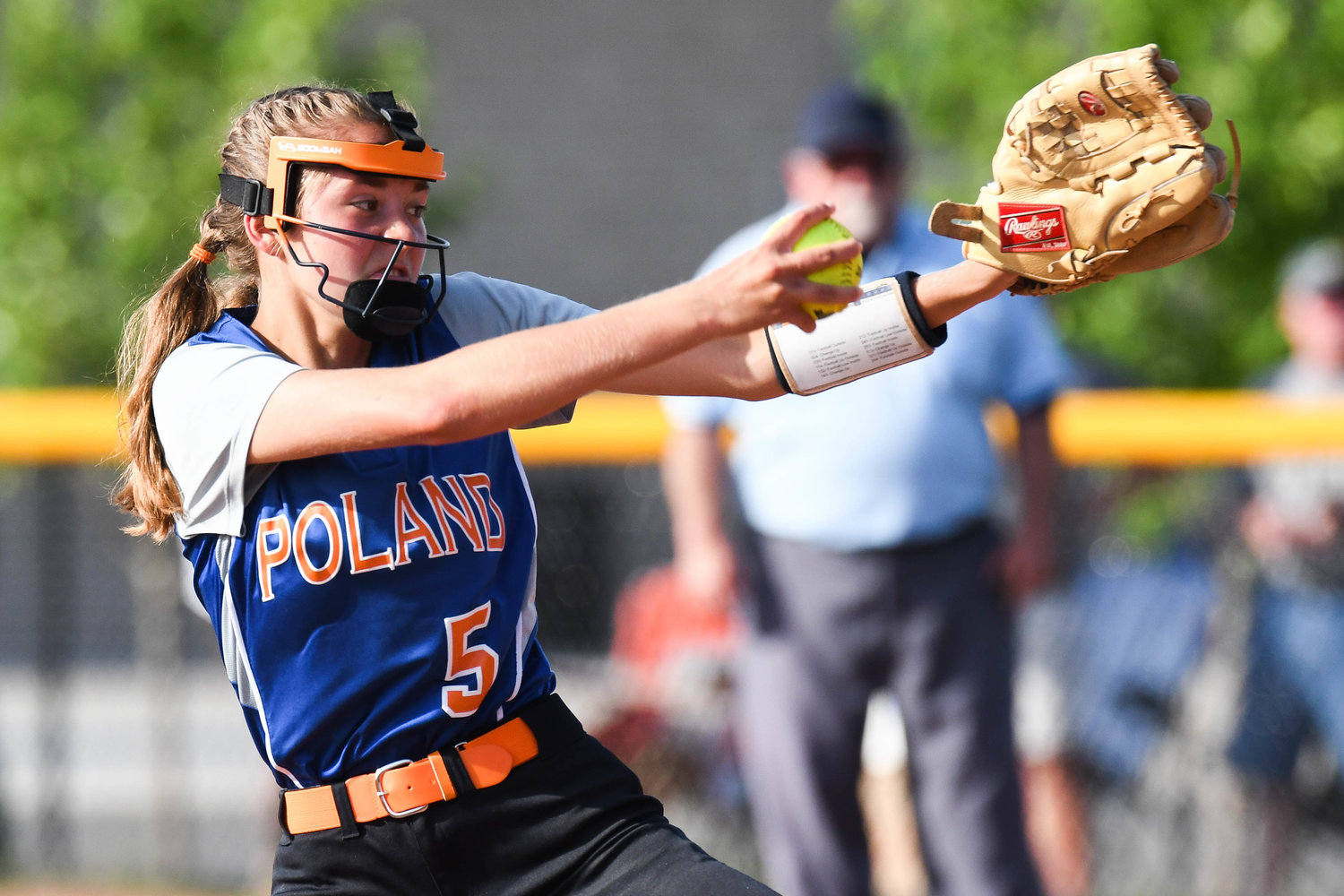 EAST SYRACUSE — The general consensus among members of the Oriskany softball team is they have a relaxed, tight-knit group.

That was apparent before the Section III Class D championship game when Oriskany players were dancing in the dugout to a mix of songs – including the hit from Disney’s new movie, "Encanto" — to stay loose.

The easy-going vibe seemed to carry over to a pressure-filled game for a fast Oriskany team against Poland.

Megan Wright delivered a key triple and later scored for the lead in the third inning, Brooke Matys added insurance in the sixth and pitcher Juliet Tagliaferri struck out seven batters — including the final one of the game with tying run on third base — to help two-seeded Oriskany edge fourth-seeded Poland 5-4 on a hot evening at Carrier Park.

“(This team) has been awesome,” said senior Jordyn Carlo, a leader for Oriskany who finished 2-for-3 with a run and two stolen bases Tuesday. “We just work really well as a team. We’re a pretty close-knit group of friends. When it comes to practice, there’s times we can have fun and joke around. But we’re also there to work.”

The pre-game dance routine started when Carlo was a freshman and has carried over through the seasons, she said. Oriskany coach Mike Reilly said he could tell the team was loose before the game as the players went through their dance routine Tuesday.

“They never panic,” said Reilly, whose team topped Poland 5-1 on May 21 and has won 12 consecutive games. “They’ve got each other. They’re confident in each other. … I’ve never seen them panic.”

The easygoing mindset helped Oriskany earn the program’s first Section III title since 2009. Oriskany made an appearance in the Section III Class D final in 2019.

Senior Ashley Reid and sophomores Wright and Matys were each 1-for-3 and had a run.

Oriskany advances to play Section X's Edwards-Knox at 4 p.m. Saturday at SUNY Potsdam in a regional final. Edwards-Knox earned a 9-2 victory over Hammond on Tuesday.

Poland, which lost in the section final in 2021, finishes this season 13-8 overall.

After Poland tied the game at 3 in the top of the third inning, Oriskany’s Wright hit a triple to left field with one out in the bottom half of the inning. She scored on junior Lani Roberts’ sacrifice bunt in the next at-bat to make it 4-3.

Reilly said Wright was due as she was in a “little slump.”

“It brings more confidence to the team. I think we start rolling once everything comes together,” Wright said.

In the sixth inning, Oriskany added an insurance run when Matys – who reached on an error with one out – scored on a passed ball for a 5-3 lead.

“We run the bases great. They’re the fastest team I’ve ever had. We fly,” said Reilly, whose team used that ability to build a 3-0 lead in the first inning. “We try to put them throughout the order so we always have a fast kid on.”

With Poland threatening, Tagliaferri struck out the final batter on four pitches to end the game.

“We always get it done,” said Tagliaferri, who Reilly called a ‘gamer.’ “I knew if she hit the ball my team would make the play. I wasn’t worried. … The last pitch, I don’t remember anything. I was in shock.”