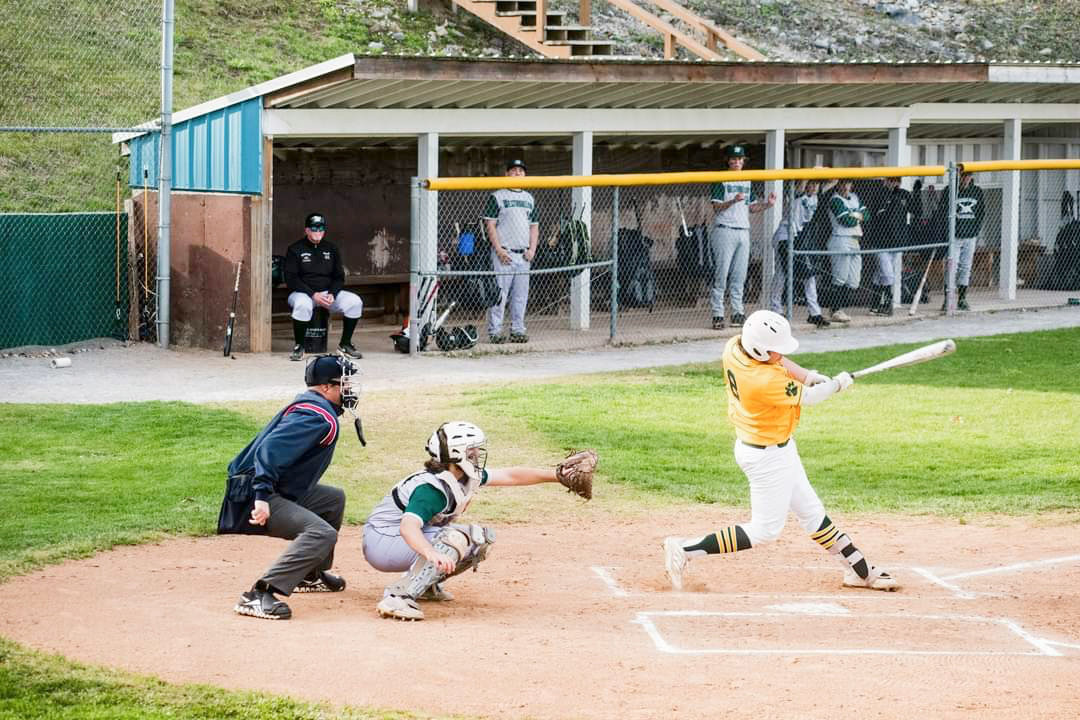 Adirondack’s Brett Sanford connects on a pitch against Westmoreland at home Saturday. Sanford had two hits and drove in a run in the game. The Wildcats lost the home game 11-8 to the unbeaten Bulldogs.
(Photo courtesy Nicole Moore)
Posted Monday, May 9, 2022 8:21 pm

The Oriskany baseball team scored a run in the bottom of the third, and that was all the offense in the team’s 1-0 win against Brookfield Saturday.

Grant also had a hit and drove in the game’s lone run.

Statistics for Brookfield were not provided.

Oriskany hosted Morrisville-Eaton in the league Monday. Results were not available at press time.

On Friday, Caleb Miller went the distance for Westmoreland in a 7-0 shutout win over West Canada Valley at home in Center State play. He struck out 15.

Miller allowed two hits and walked two. He improved to 4-0 on the season.

The Bulldogs’ offense gave him help early, scoring two in the first and two more in the third. Owen Davison singled and doubled, scored once and drove in three. Josh Suber was 2-for-3 with three runs and two stolen bases. At the plate, Miller singled, scored twice and stole two bases.

Stastics for West Canada were not submitted.

Saturday, the Bulldogs had to fight off Adirondack for an 11-8 road win in non-league play.

With the teams tied 2-2 after three innings, Westmoreland scored two in the fourth and four more in the top of the fifth to lead 8-2. The Wildcats rallied with six runs in the bottom of the fifth to tie the game.

Westmoreland then scored three in the sixth to lead 11-8. The Bulldogs held Adirondack off the scoreboard the rest of the way for the win.

Jerry Fiorini started for Westmoreland and allowed two earned runs in three innings on a hit and five walks. Mike Scalise (1-0) got the win in relief. He went three innings, allowing six runs, two of them earned, on four hits and two walks. Josh Suber earned his first save with a hitless, scoreless inning.

Bailey Gleasman took the loss, going two innings and allowing three runs, one of them earned, on three hits and four walks.

Westmoreland is now 10-0 overall and 6-0 in the league. The Bulldogs were at league foe Herkimer Monday. Results were not available at press time.

The Holland Patent baseball team scored five runs in the top of the fourth to take a 6-2 lead and held off Adirondack for a 7-5 win Friday in Center State Conference action.

The Wildcats trailed 7-2 going into the sixth and scored two then and another in the seventh but came up just short.

Alex Hoole got the win for HP on the mound. He also went 1-for-3 with an RBI at the plate.

The Golden Knights got a hit and two RBIs from Adam Jones. Alex McLaughlin had a hit and drove in one.

Adirondack’s Colin White was 2-for-3 with an RBI. Gleasman and Brett Sanford each had a hit and an RBI.

Max Weiler took the loss on the mound for Adirondack. He went four innings, allowing six runs, three of them earned, on six hits and two walks.

HP, 9-4 overall and 6-1 in the league, hosted Clinton in a doubleheader Monday. Results were not available at press time.

Cook homers and pitches Whitesboro to a win

Ryan Cook hit a home run and picked up a win on the mound Friday as Whitesboro shut out Onieda 6-0 in the Tri-Valley League.

Cook hit a solo home run and had two runs scored and two RBIs on the night. He also improved to 4-0 on the season as a pitcher.

The Warriors also got a 2-for-2 effort with a run and RBI from Dominic Bullis. Colin Skermont and DaShawn Hutchinson each had a hit and scored a run.

Whitesboro is now 9-0 and 5-0 in the TVL. The Warriors were at TVL host Camden Monday. Results were not available at press time.

Oneida, 6-2 and 4-1, hosted New Hartford in the league Monday. Results were not available at press time.

The Utica Proctor Raiders trailed 5-4 after two innings but Martin Learnard threw 5 1/3 innings of scoreless baseball while the offense rallied.

Proctor won 8-5 over Auburn at home Friday in non-league play.

The hosts scored four in the bottom of the first inning to lead 4-1 but Auburn rallied with four runs in the top of the second. Utica starter Angelo Podagrosi went 1 2/3 innings, allowing five runs, two of them earned, on three hits and three walks. Learnard came in during the second inning and went on to allow a hit and four walks the rest of the way to earn the win.